The new addition to the Supra family adds more than just an extra letter to its name. Darran Charles finds out if it gets an A+. 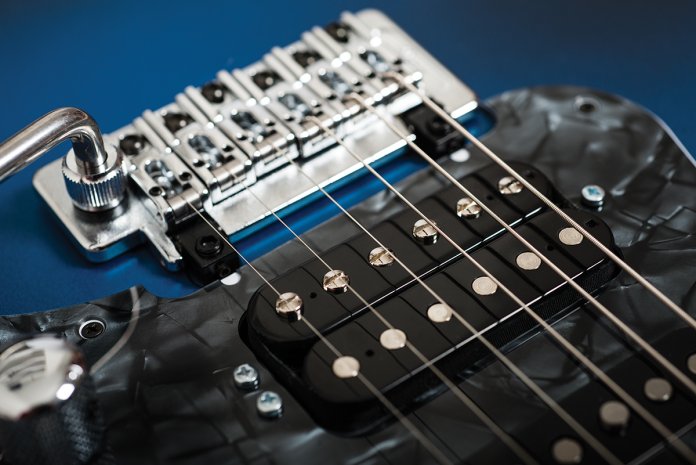 It’s remarkable to think that the Vigier Excalibur has now been around for 25 years. In that time, various incarnations of the model have found their way into the hands of players as influential as Shawn Lane and Guthrie Govan, but perhaps the French company has still not achieved the household name status of other souped-up S-type producing brands. We take a look at the new Excalibur Supraa.

There are already more than 10 different sub-categories in the Excalibur range which, aside from the Shawn Lane signature model, more or less feature the same spec: 10/90 carbon reinforced neck, stainless steel frets, string damper, etc.

The new-for-2016 Supraa differs from its lesser-vowelled brethren the Supra in that instead of the usual trio of DiMarzios, it features Vigier’s own Amber hand-wound pickups, which have been voiced specifically for the company’s guitars.

The Supra/Supraa branch of the Excalibur range is one of the few that offers a matt finish. This won’t be to everyone’s taste, but the Urban Blue on our model is anything but dull and lifeless, with the varying hues really popping. A thicker gloss finish would likely be more hard-wearing, but there are resonance benefits to be had from fewer coats of paint, and we think this guitar looks very cool indeed.

Another polarising feature is present and correct: the zero fret system, though in recent years Vigier’s version has undergone a few changes. Instead of being one single fret, it has now been divided into six equal parts, therefore rendering it necessary to replace only one part at a time should any wear occur.

In our experience, zero-fret wear – usually in the form of a groove/notch forming underneath one of the thinner strings, ultimately resulting in an annoying ‘ping’ when the string travels in and out of this groove – usually takes at least 12 months to show any signs of developing. 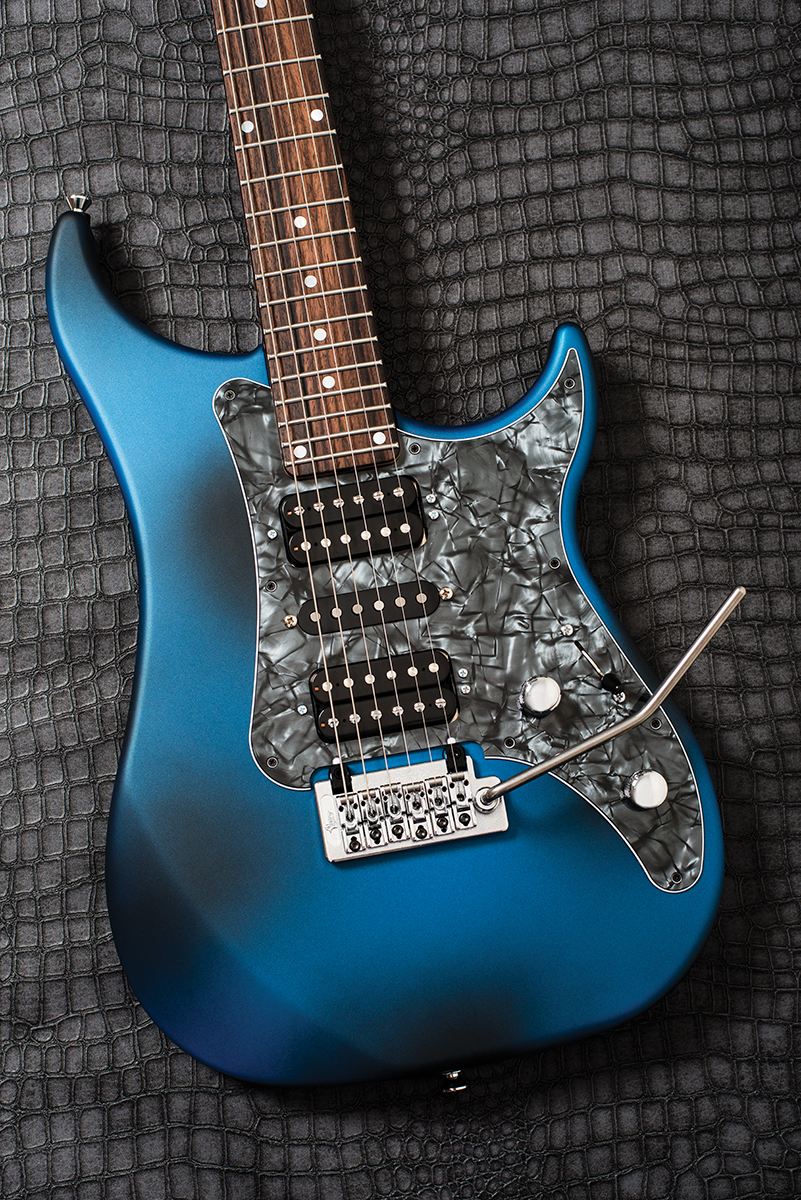 A recent addition to the Excalibur range is a string dampener, which is a small piece of Velcro-like material spanning the width of the fretboard behind the nut. This has been devised to be a permanent replacement for the hairbands that some guitarists wrap around the headstock in an attempt to prevent harmonics ringing out above the nut.

The neck is a slim C shape: slightly slimmer than a typical modern Strat, but certainly not in Ibanez Wizard territory. The dimensions seem to encourage a thumb-behind-the-neck approach, and therefore could be suited to the more ‘technical’ player.

As we’ve come to expect from Vigier, a very low action can be achieved quite easily thanks to its 300mm radius and impeccably finished stainless steel frets. All Vigier guitars are fitted with the company’s pioneering 10/90 carbon reinforced necks (for those unfamiliar with Vigier necks, they have a carbon reinforcement bar rather than a traditional truss rod). The strength of the carbon reinforcement brings with it a slightly tauter string tension. 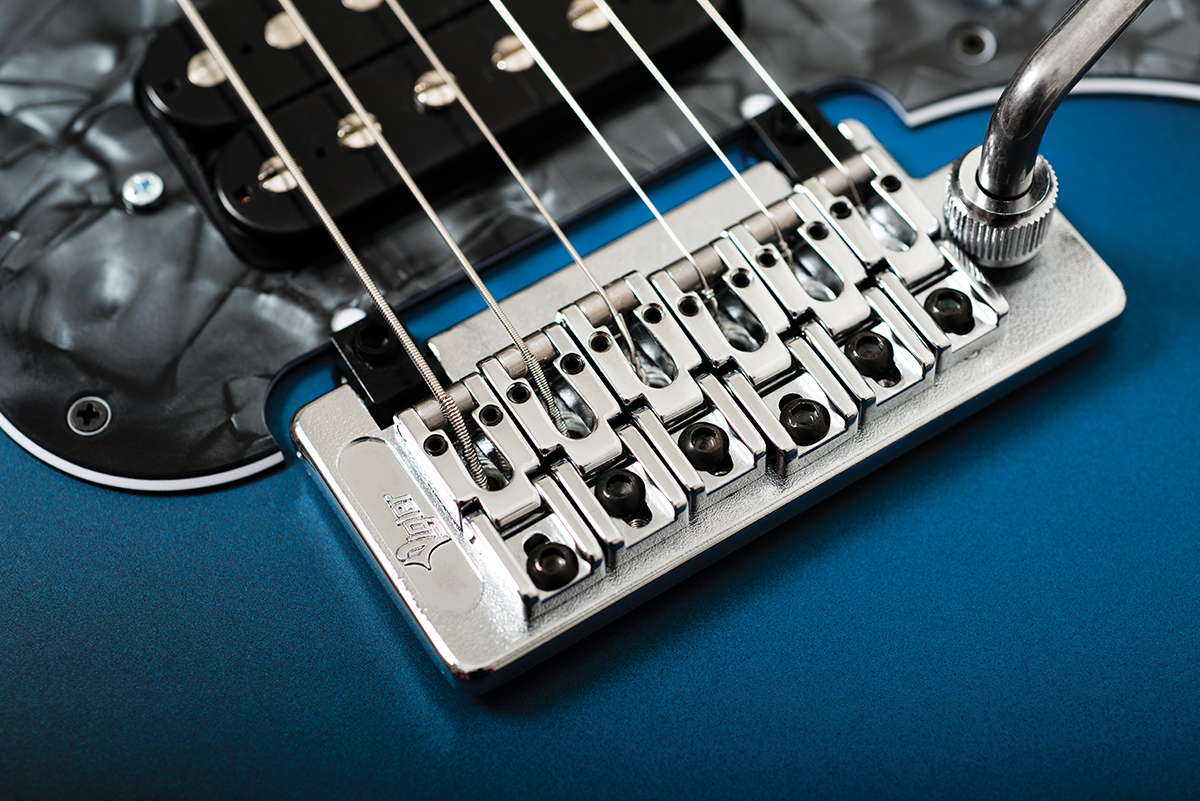 We are hugely impressed by the Excalibur’s vibrato system, mounted on needle bearings

This may not be noticeable to some players and could be addressed by employing a lighter string gauge, but you may not necessarily experience the same tension that you would expect from your usual brand/gauge of strings.

The unwaveringly straight neck that the 10/90 design guarantees, however, makes it the ultimate guitar for any frequent-flyer musician, because whatever the temperature or climate, the neck retains unerring stability and offers a consistency of feel that very few manufacturers can claim to match.

If it was Patrice Vigier’s intention when designing the Amber humbuckers to make them more punchy and aggressive than the usually favoured Dimarzios, then it’s a case of ‘mission accomplished’.

The bridge pickup is bright and aggressive, pushing the high frequencies into the sonic territory that we’d expect from a maple ’board Strat with a high-gain bridge humbucker. We get the impression that lead work was very much in mind when voicing the pickups, such is the Supraa’s ability to scythe through the mix with single-note lines. 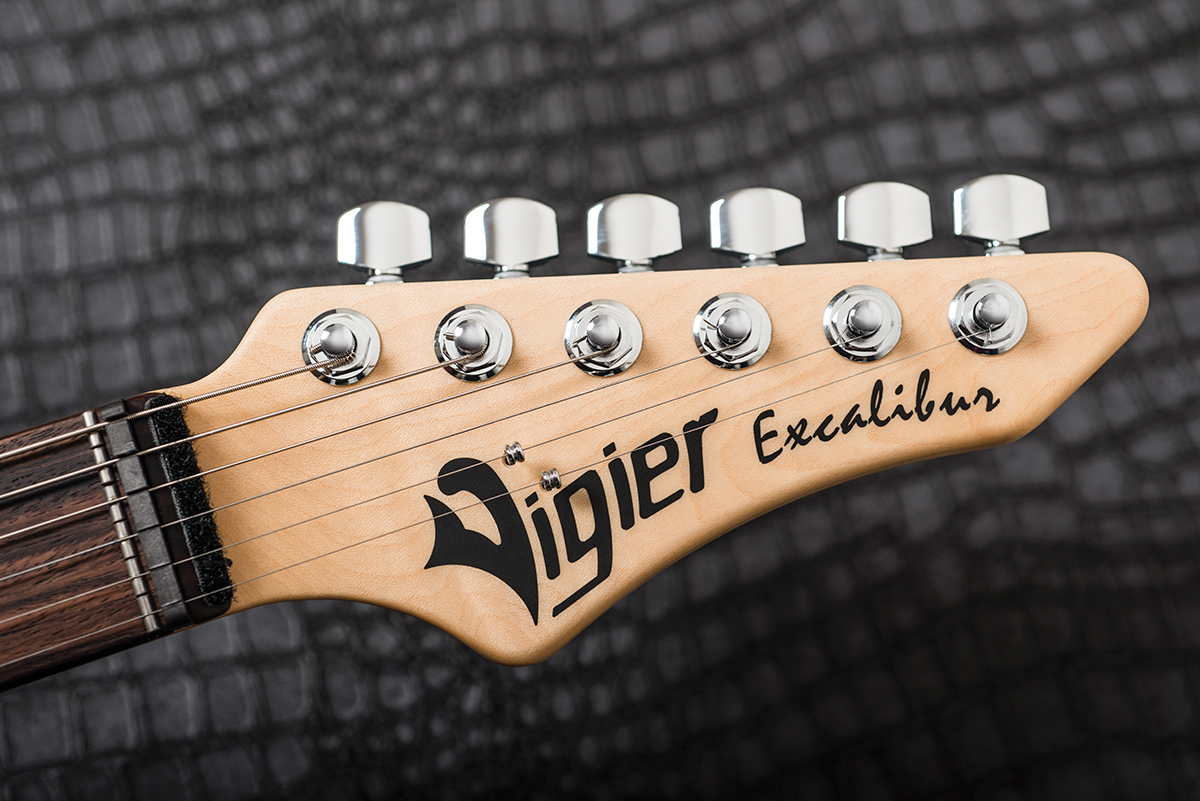 The clean sounds are diverse, with the “naturally dried” alder body exerting its influence and providing the glassy clean sounds you would expect from a souped-up Fender Strat, especially on positions two and three of the five-way selector. However, if you’re the type of player who tends to achieve their cleaner tones by rolling off the guitar volume on a slightly overdriven amp setting, then you may be slightly disappointed: rolling off the volume tended to dull the frequencies, and we found the sound to be less dynamic than we were expecting.

A special mention has to be given to the perfect balance of volume when switching between each of the five positions. This is a feat achieved rarely on a three-pickup guitar with a five-way switch, but we noticed that the polepieces on each pickup have been adjusted individually – which would indicate that a great deal of time was spent optimising volume consistency following manufacture. 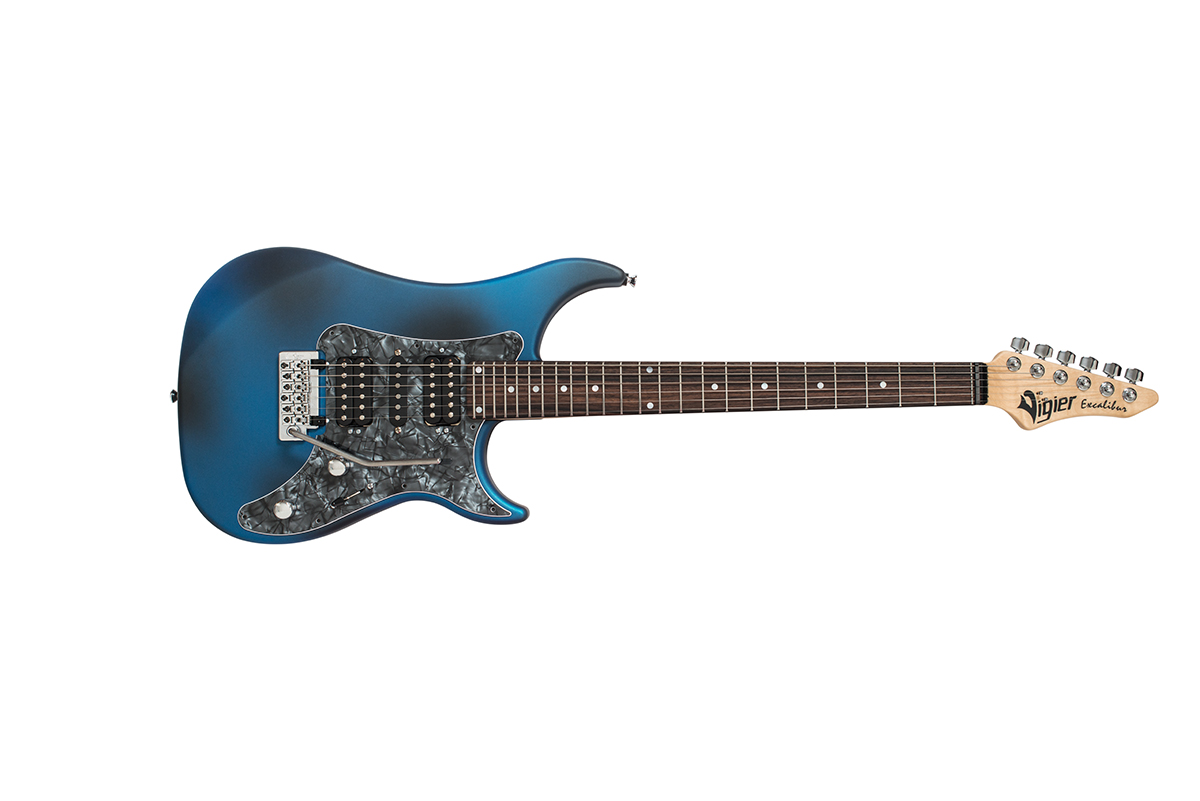 The Vigier vibrato system, mounted on needle bearings to minimise friction, is responsive and stable, and remains one of the best non-locking vibratos out there. Try as we did, tuning remained unaffected by even the most vigorous of whammy work.

Fans of zero-fret guitars will laud the consistency in volume when incorporating open strings with fretted notes during chordal work (given that, essentially, there are no open strings); detractors will complain for the exact same reason. There is something innately satisfying about the sonic scare that a quick pluck of the B and E strings can provide when playing blues-rock rhythm material; but then for more complex higher-register chords, the aforementioned consistency of volume offered by a zero fret could prove invaluable.
Whether or not the Excalibur Supraa is worthy yet of the ‘classic’ tag, it without doubt remains one of the most innovative guitar designs to have been released in the last 20 years. Traditionalist players are certainly unlikely to be seduced by its modern aesthetics and high-output pickups, but then Vigier has other models in its catalogue that better cater to their requirements. 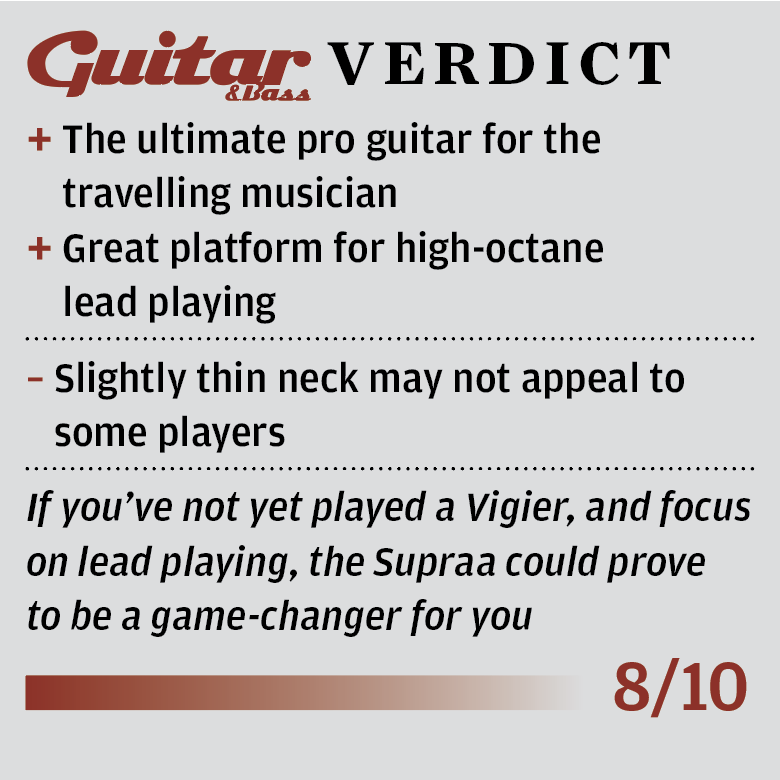