The Gibson name may not appear on the headstock, but this beautiful pre-war treasure delivers dry, dusty blues tones to die for. 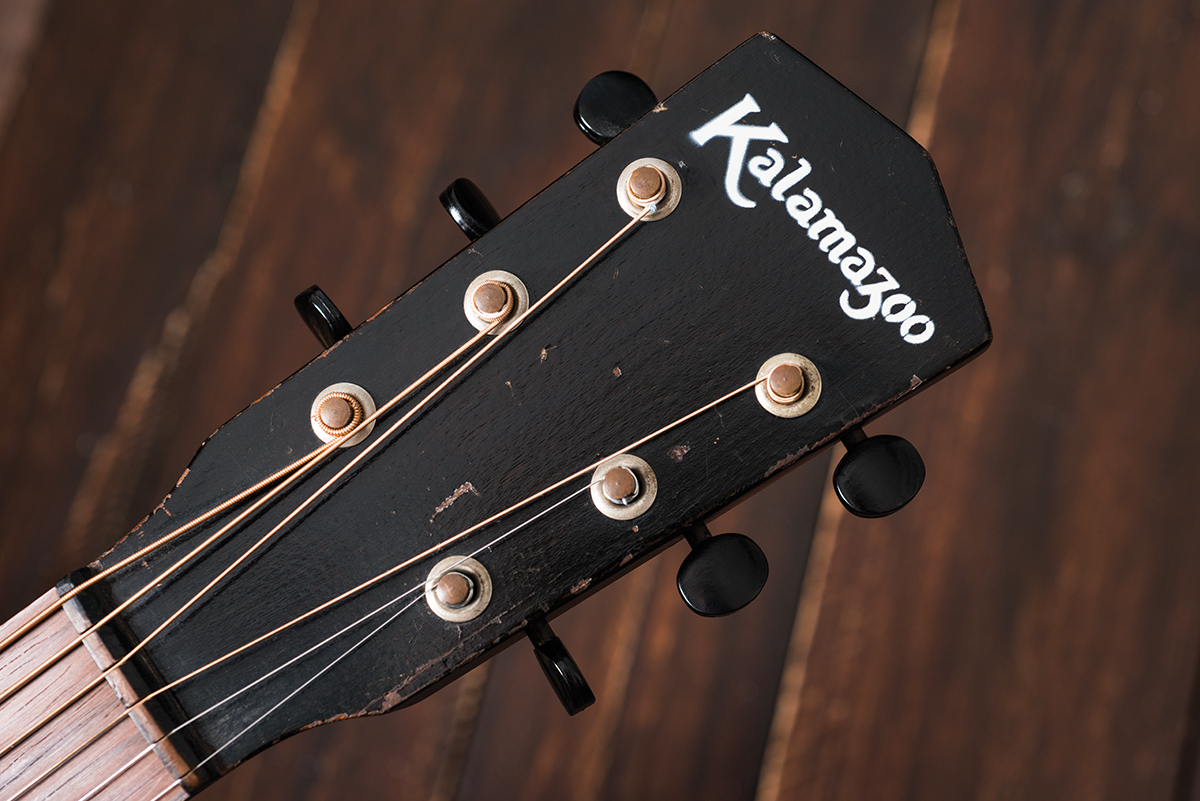 Before Gibson made Epiphone its budget brand, it had Kalamazoo. Named after Gibson’s home town in Michigan, Kalamazoo was the brainchild of Gibson president Guy Hart, who needed something to keep Gibson in the musical instrument business through the Great Depression. The Kalamazoo line was revived during the 60s for a series of electric guitars, basses and amplifiers that were a notch below the mid-priced Epiphone-branded products.

The revival was short-lived, and lasted only until 1970.

Although there’s no label, figuring out the model number of this example wasn’t hard. Between 1933 and 1942, there were only a handful of Kalamazoo flat-top acoustics and the small, square-shouldered body marks this one down as a KG-11. Most ‘bluesologists’ agree Robert Johnson played and recorded with the larger KG-14. 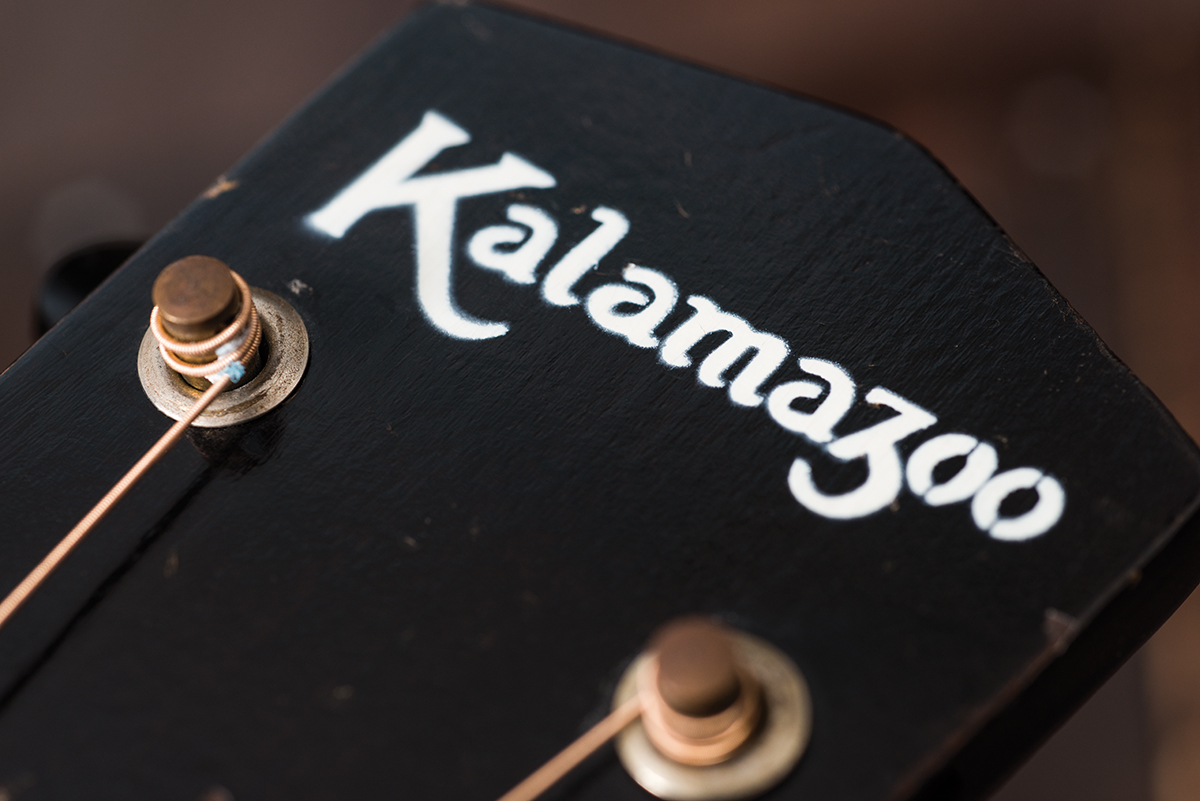 The logo’s fuzzy edges are the result of stencilling

On the neck block, there’s a three-digit number and a letter, with both corresponding to a 1936 manufacturing date – assuming that Kalamazoo and Gibson factory order numbers followed the same system. These guitars also crop up with different brand names, such as Ward and Recording King.

Although it’s not officially a Gibson, the KG-11 is undeniably Gibson-like. Sharply-carved headstock corners that are parallel to the nut, a pronounced headstock thickness taper, the fire stripe pickguard and the darkly shaded top are all company characteristics, and the three-on-a-plate tuners look the same as those found on Gibsons of the era. 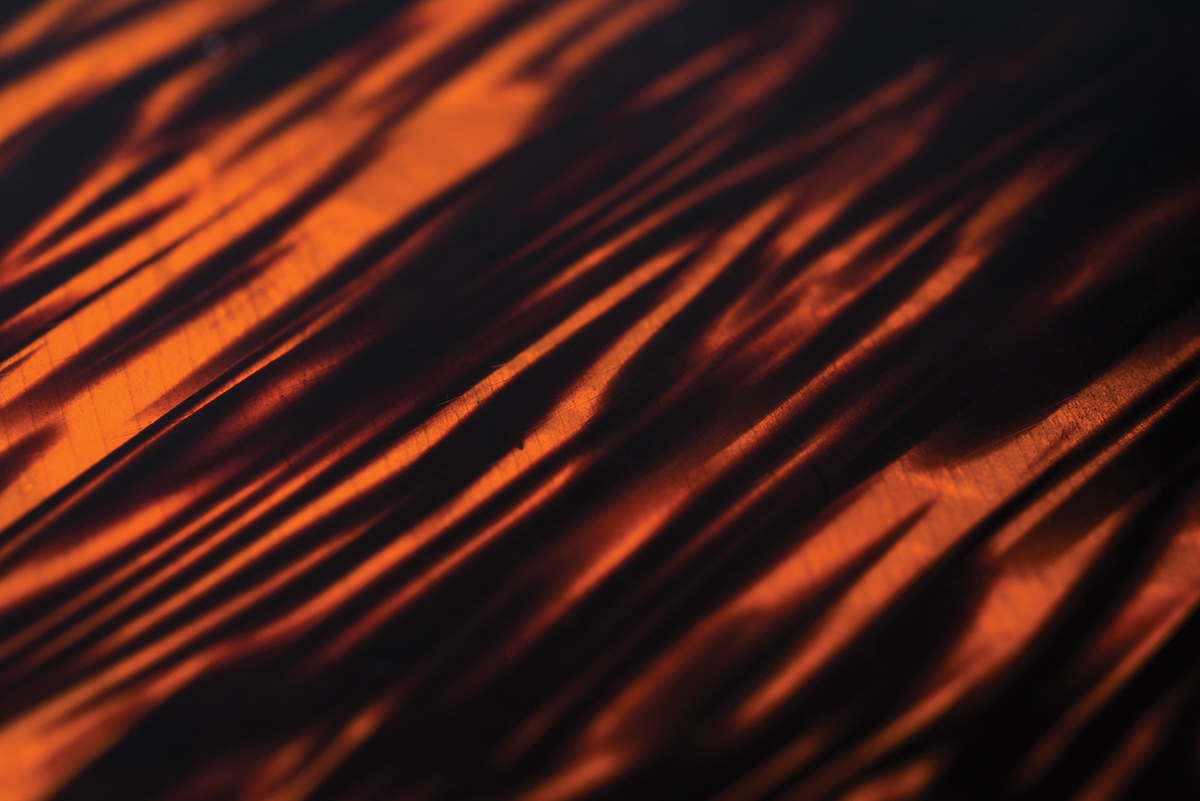 Remarkably, the KG-11 appears to have an all-solid body, too. The back and sides are mahogany and the top is spruce, but the budget giveaway is the fact that it’s a three-piece top with a wide-grained centre section and tighter-grained wings. The join lines are hard to spot under the shaded edges and deep-amber middle. Other departures from top-end Gibson spec include ladder bracing rather than X-bracing and the absence of
a truss rod.

The headstock logo looks like a stencil, and the entire neck – peghead included – is sprayed with dark brown lacquer to match the body. As far as I can tell, the neck has never been re-set, and the joint has held up so well it doesn’t even need one. However, the fingerboard – which is undoubtedly original – has been sanded smooth and re-fretted. It looks as if the work has been carried out recently, but the board has a perfect playing surface with a 12-inch radius, and it’s an absolutely top-notch fret job. 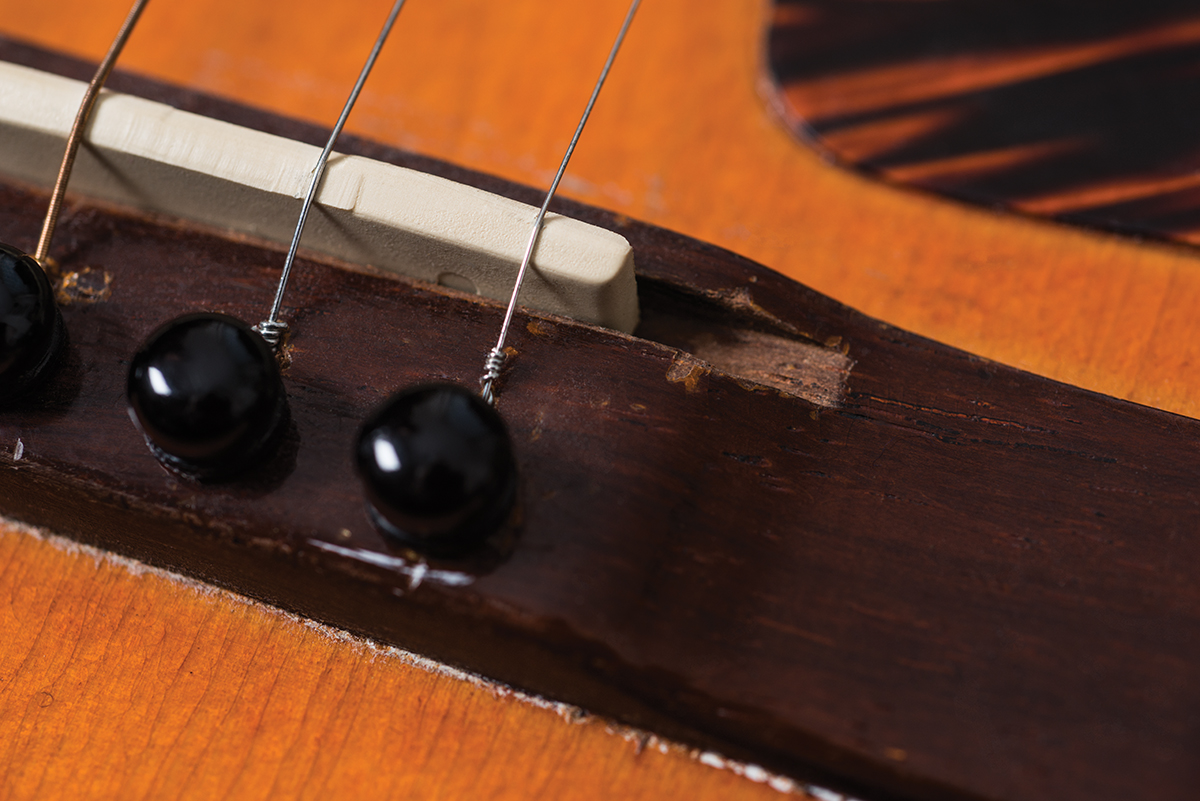 At 1/8”, Gibson saddles are fairly wide, allowing for additional intonation compensation, but this non-original plastic saddle is too short for the slot

Lacquer covers the nut, so it’s been there since new, but I can’t tell whether it’s ebony or rosewood. I would usually assume the former, but in the areas where the lacquer has worn away, the colour is brown enough to raise doubts. At 14.75 inches wide and 17.5 inches long, the body size equates more or less to Martin’s 00 and the Gibson Nick Lucas – in size if not in shape.

Kalamazoo KG-11 in use

In the time between the photo-session and the review, the plastic saddle was removed and this KG-11 was treated to a new bone saddle. The effect on the tone was dramatic, with massive increases in punch, volume and clarity – and the KG-11 was no slouch in those departments to start with. 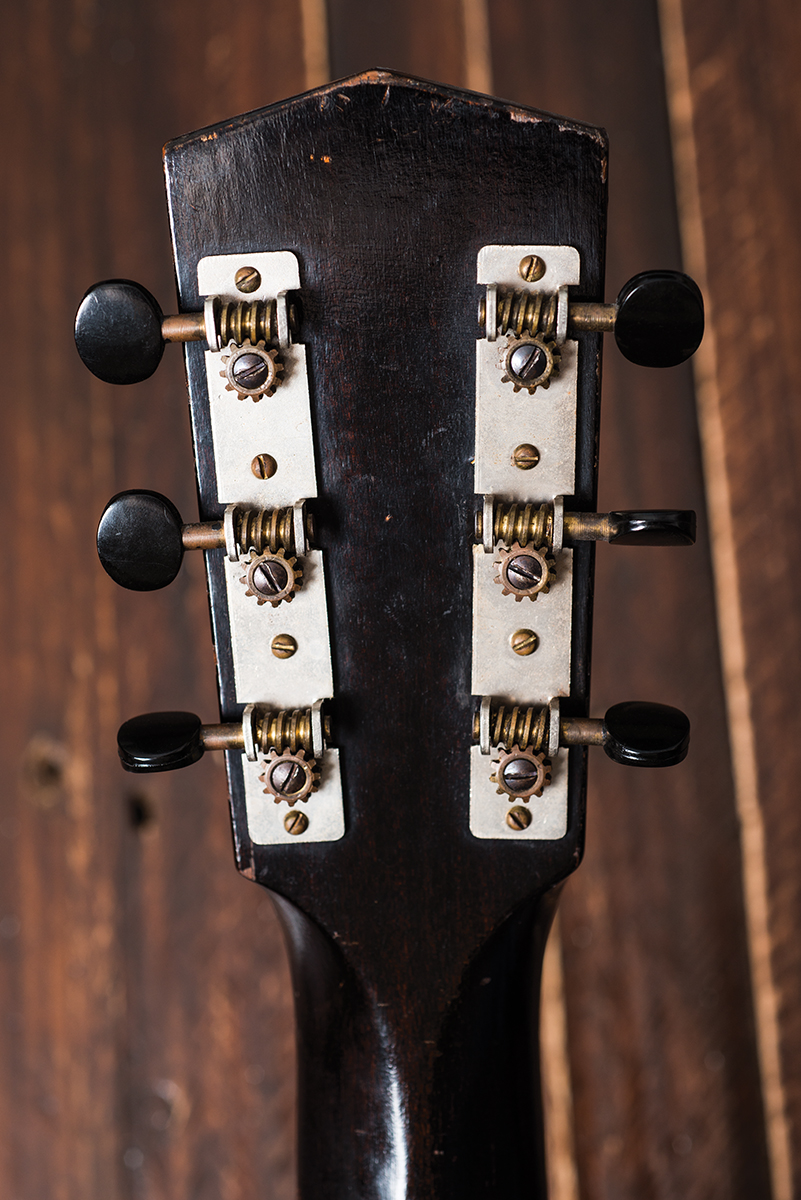 These original tuners are showing their age, but they still work well enough

The feel is absolutely vintage because the neck has been left deep for stability without a truss rod, but any potential clubbiness is alleviated by the pronounced V profile.

The nut width and string spacing are both wide by modern standards, but it facilitates easy fingerpicking and the 24.75-inch scale length keeps finger stretches to a minimum. The upshot of all of that is this septuagenarian has absolutely no playability issues.

As we’d hoped, the KG-11’s tone has the dusty dryness of a pre-war Gibson, that’s capable of making even those of us with limited ability sound like authentic blues players. Whether you’re picking, strumming or sliding, the KG-11 sounds somehow ‘real’, with a sweet snarl and barely a trace of boxiness.

The bass impresses, considering the small body, and without sounding excessively bright the KG-11 has superb clarity and note definition. The bracing has a strong influence on tone and there’s something about the single-note punch that’s reminiscent of a small-bodied archtop. However, the flat soundboard and big soundhole contribute a full-frequency spread that responds equally well to a strong right-arm attack or delicate fingerstyle. Perhaps an X-brace would provide a fuller midrange, but the ladder bracing has qualities that more than compensate. 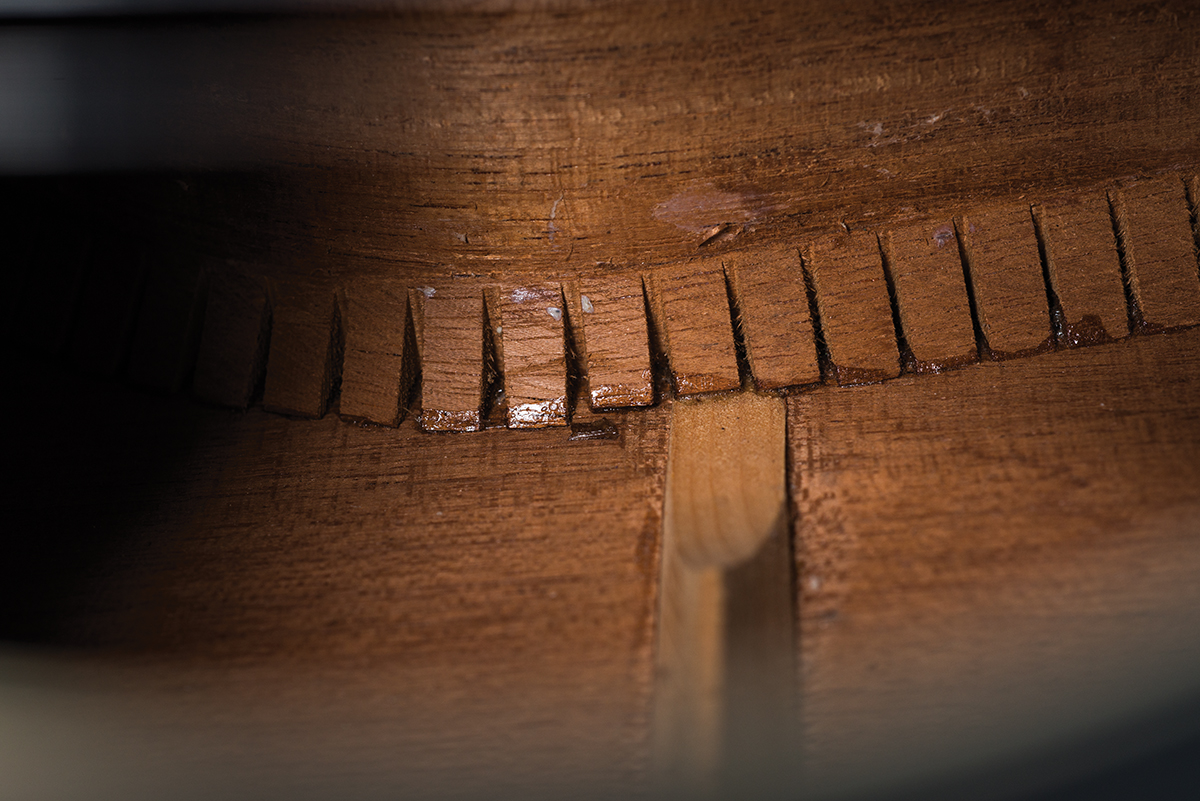 The KG-11 produces what I can only describe as a harmonic reverb effect. It’s most apparent as you play single notes, and tones linger on inside the body long after you have let go of the note. Harmonics swell and shift to create a beautiful and somewhat eerie backdrop that is special and inspiring. Perhaps it would be more accurate to call them harmonic ‘undertones’ rather than overtones.

If you ever get the chance to try one of these guitars, you should follow Robert Johnson’s lead and try playing into a corner with reflective surfaces. It’s called corner loading and you’ll notice stronger bass, fuller midrange and enhanced detail – a bit like the effect of using a decent-quality studio compressor. In other words, the guitar’s tone will improve and you’ll be able to hear it better. Actually, this is something you can try with any acoustic guitar, but the smaller ones allow you to get further into the corner to magnify the effect. 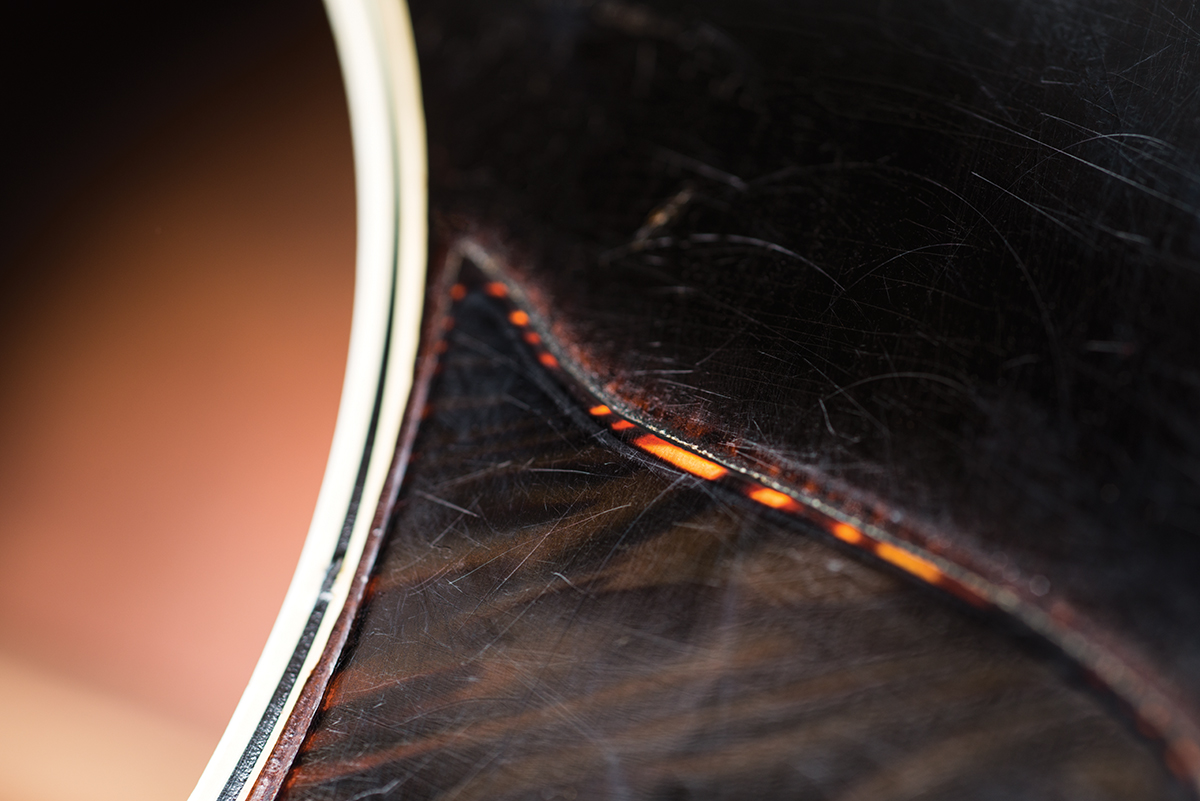 The KG-11’s tone is so ‘old-school’ that it is less adept as an all-rounder than the 1939 Gibson L-00 we recently featured in Vintage Bench Test (G&B August 2016). However, for rootsy country rhythm, blues and ragtime picking and bottleneck the voicing is perfect, and the 14th-fret neck join makes octave access that little bit easier.

While it’s possible to make new electric guitars sound ‘vintage’ with the right pickups and hardware, there’s something about the tone of 70-year-old timber that you can’t replicate. Blues enthusiast Simon Butler kindly loaned us this guitar, and it’s not for sale, but with prices for KG-11s ranging from £1,000-£1,500, Kalamazoos are still relatively affordable by vintage standards.