The late-30s was a golden era for American acoustics. This 1939 Gibson L-00 is no museum piece – and that’s a compliment. 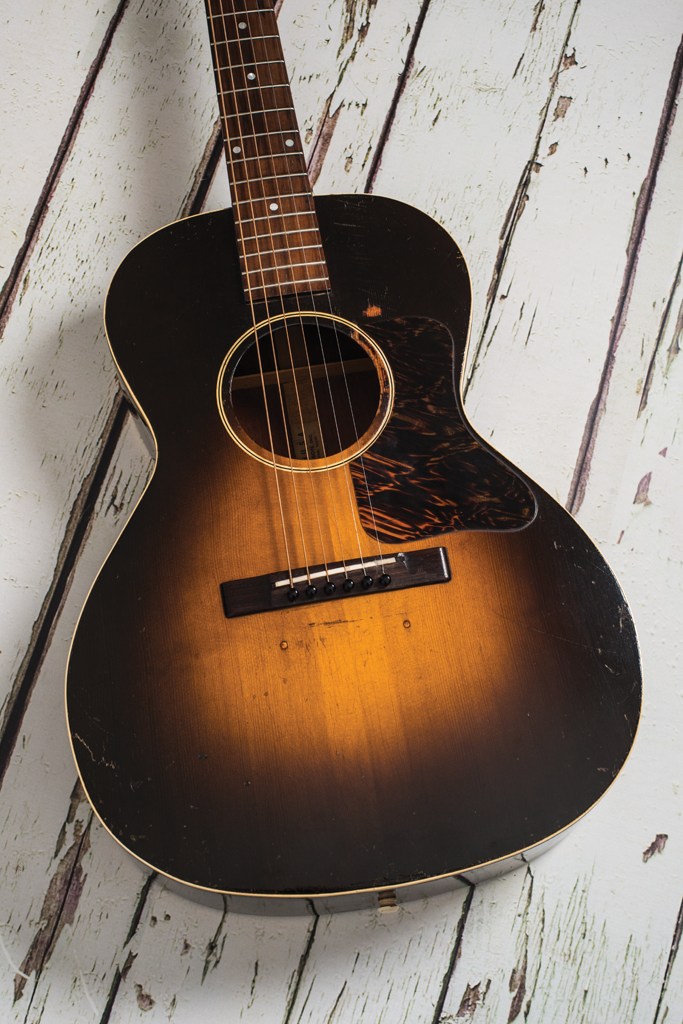 Over this side of the pond, we may baulk at the suggestion that this Gibson L-00 might be a pre-World War II guitar, but from an American perspective it appears to be just that. Cranes Musical Instruments has determined it was made in 1939, but it’s hard to say for sure.

We can be confident this example was made between 1936 and 1945, because L-00 production ceased in 1945 and back binding was introduced towards the end of 1936. It’s difficult to decipher Gibson’s numbering system, but referring to Joe Spann’s book on Gibson Factory Order Numbers (FONs), the number on this guitar’s neck block corresponds with a production batch of L-00s made at the end of 1937. 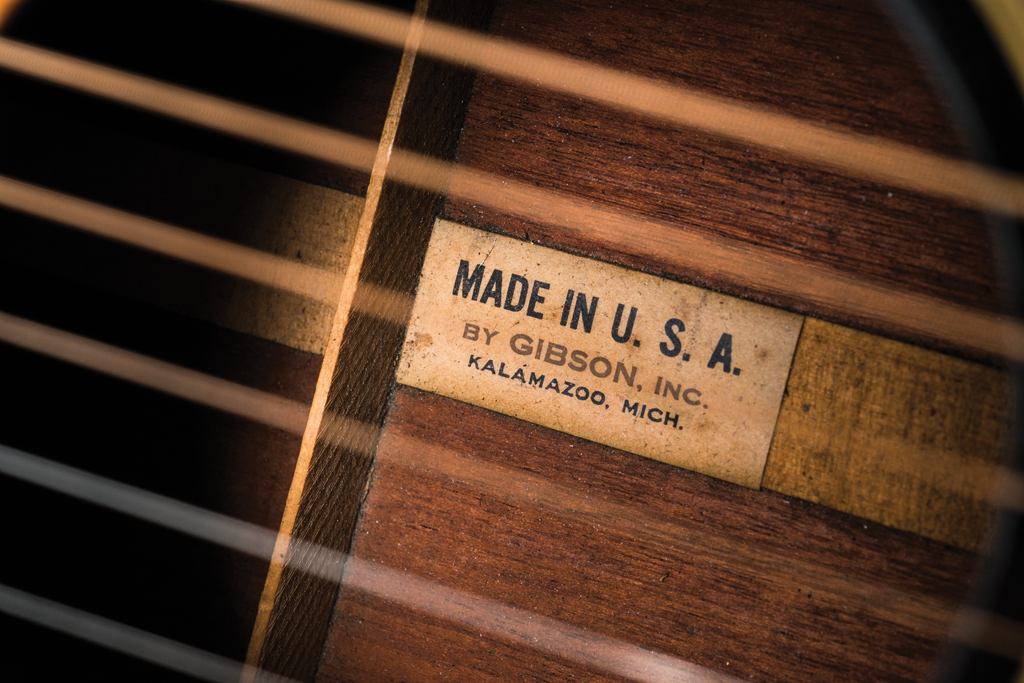 It’s unlikely to make any difference to collector’s value whether it was made in ’37 or ’39. Inside the case, there’s a very old photo of the guitar with its previous owner, showing a tailpiece fitted to the guitar along with a bar behind the bridge. Judging by the clothes the women are wearing, I’d suggest the picture was taken in the late-1930s or early 1940s. The bar was screwed onto the top and there are two telltale holes that have since been nicely filled and lacquered over. Three tailpiece screw holes have also been filled and lacquered at the tail.

In order to lower the action and create a sufficient break angle, the Brazilian rosewood bridge has been shaved down and tapered at the back. Unfortunately, the work was done crudely: the saddle barely protrudes above the bridge and the string grooves have been cut so deep, it’s more like a nut than a saddle. It’s a shame, because in all other respects this L-00 has survived into its seventh decade fairly unscathed. The body finish has a gorgeous patina, the fingerboard is clean and divot-free, and there are no nasty cracks in the body.

The neck is a different story. It seems that the finish was stripped from the back of the neck, presumably because it was worn and somebody decided to have it re-lacquered. Rather than match the neck colour to the body, as it had looked when new, clear lacquer was used and the original tobacco-brown lacquer on the rear of the headstock was sanded to create a faux stinger.

The lighter finish reveals a stacked heel, and the wood at the heel’s sides has sanding scratches across the grain, suggesting whoever stripped the neck had begun to lose patience, and possibly the will to live, by that point. Many of us will sympathise.

The back of the headstock has two interesting features. A plugged screw hole is evidence of a long-departed strap button, and it can be seen from the old photograph that’s exactly how the previous owner hung it. Just below the plug, there’s a miniscule ‘Made In The USA’ stamp, which, apparently, Gibson applied to guitars destined for export to Canada. 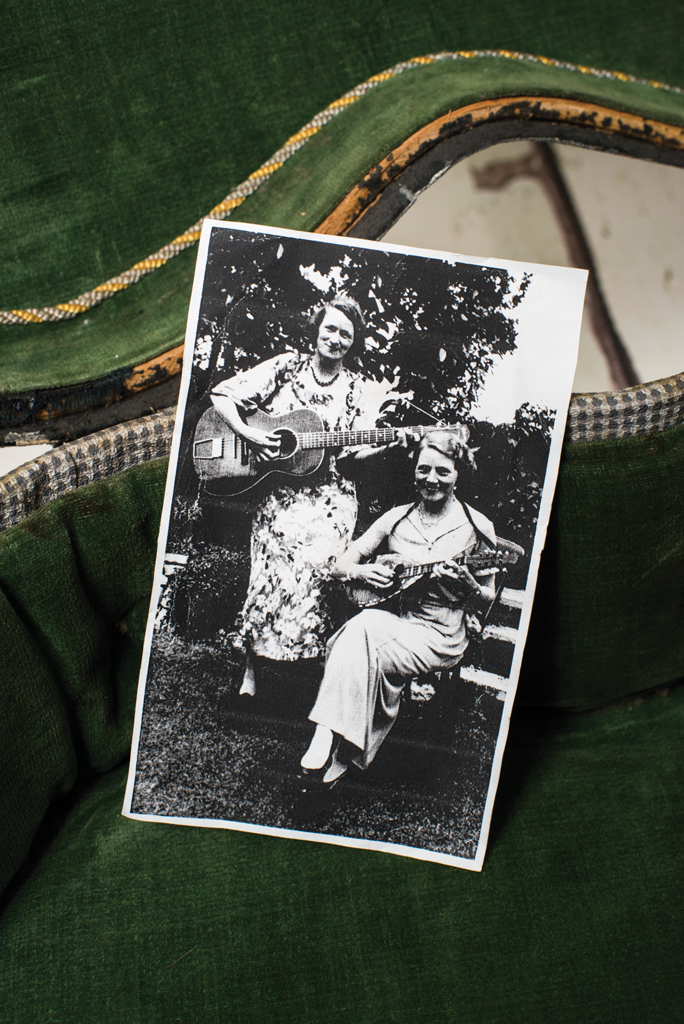 The tuners appear to be original, because there is no evidence of other tuners having been fitted under the plate, and they match photos of other Gibson acoustics from this era. They also work surprisingly well and hold their tuning.

The ebony bridge pins also look original, along with the strap pin and the gorgeous fire-stripe scratchplate, which has barely shrunk at all. However, the original nut was most likely ebony and, although it’s long gone, the bone replacement looks the part and is cut properly. The guitar comes with a very old case that’s in reasonable condition structurally and a very good fit for the L-00.

Although it may have got there by nefarious means, this old guitar plays astonishingly well. The action can be described as medium-low and the frets have ample life left. There are no buzzes, rattles or choke outs, and the only vintage signifier is the neck’s rounded hand-filling fullness. As with Gibson’s fat 50s necks, this one is supremely comfortable and the slightly wider-than-usual string spacing should suit pickers and strummers alike.

The tone is quite unlike that of an equivalent-sized Martin from this era. Where Martins can have a delicate and ethereal quality, the old Gibson is a punchier and more exuberant instrument. With impressive projection, the L-00 combines surprising bass power and depth with a forceful midrange and a clear but sweet treble.

Like many featherweight pre-war acoustics, the tone has a dry intimacy and such an immediate touch response that you can’t help but feel connected with the instrument. Blues-y picking and bottleneck are the obvious places to start, but you’ll soon discover you can play Travis-style, country rhythm and even bluegrass.

The L-00 is suited equally well to fingerpicking and strumming. Far from being a retro curiosity, you can bash out rockabilly rhythms or 60s-era pop tunes. You can even conjure up that early 60s British folky picker vibe, and the balanced response and lack of boominess would make this an outstanding guitar for recording. 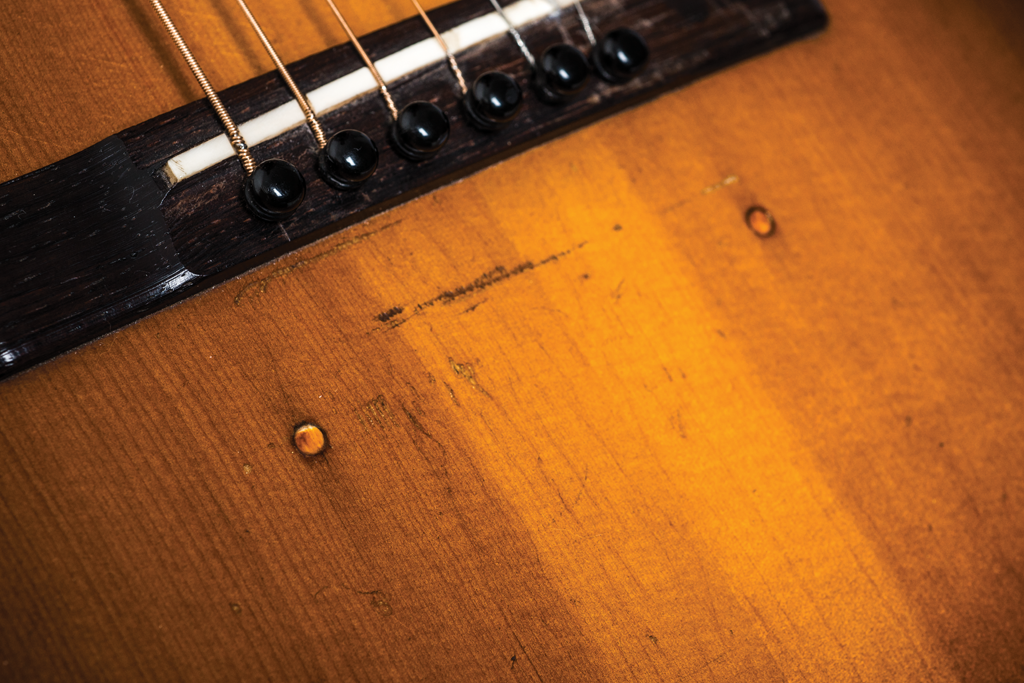 Ultimately, the tone is so evocative and distinctive that playing this L-00 almost transports you to another place and time. In a sense, that’s what’s so compelling about really good vintage guitars. You can circumvent all that futile stress about which op-amp chip or NOS power valves will make you sound like an authentic Texas blues virtuoso, or which M69 rings and lightweight tailpiece will make you sound like a 70s rock god. You could probably put a set of Elixir Nanowebs on this Gibson L-00 and still taste Oklahoma dust in your mouth every time you play an E chord.

Guitars of this age rarely come without some playability or originality issues. When they are flawless, they tend to be priced accordingly, so taking on one that is perfectly playable, but also a viable candidate for sympathetic restoration in the longer term, can be a good option. It gets you a serious vintage acoustic at a lower price point and you can spread the cost as you enjoy playing it and the process of making it right. Somebody really needs to adopt this baby. 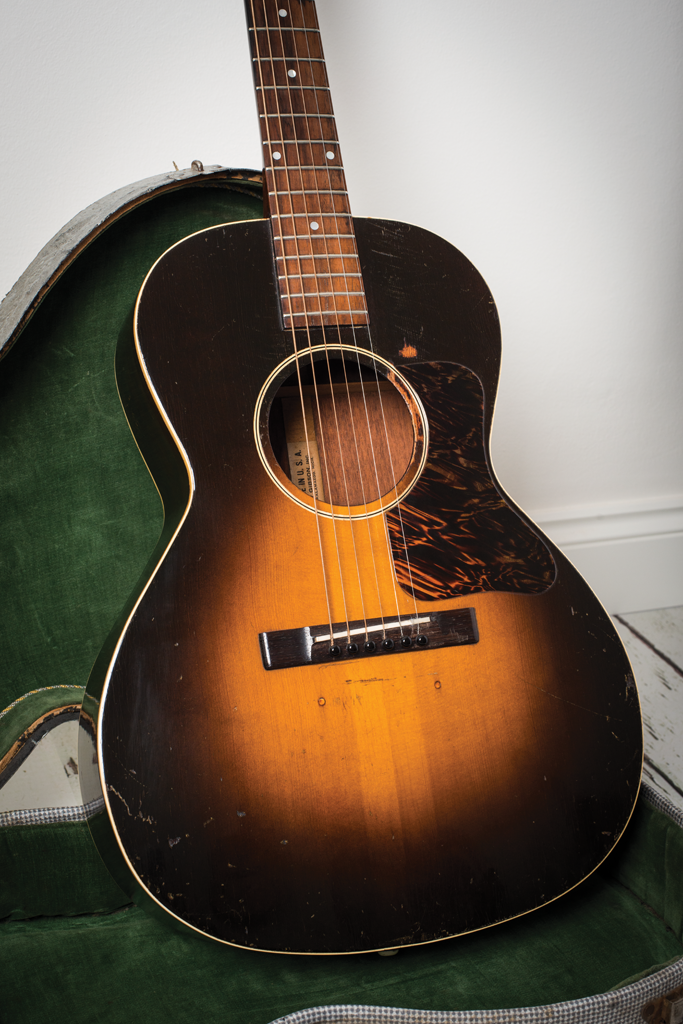