Some mystery surrounds the exact date that this stunning Oriental Red Jet Firebird was made. 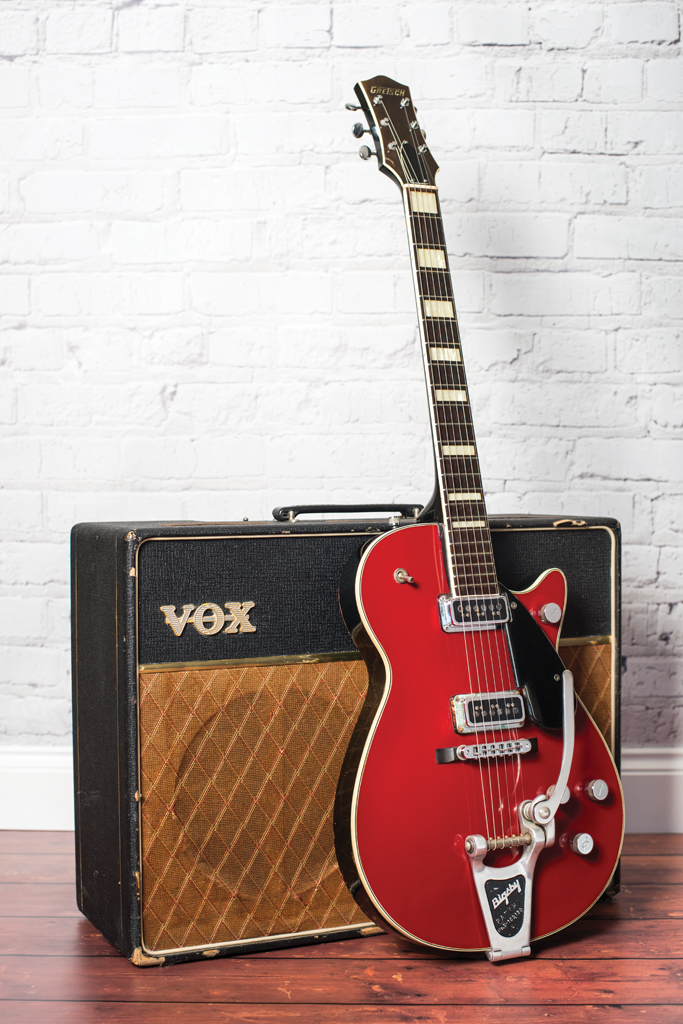 Dating this guitar is tricky, because only a small shred of the original label remains in the control cavity. We can be certain this fine instrument is a Jet Firebird because of the Oriental Red Nitron plastic covering on the front. Gretsch also manufactured drums, and the company started gluing drum wrap material over the pressed plywood tops of ‘solidbody’ models such as this, the Sparkle Jet and the early black Duo Jets.

Jet Firebirds sometimes had their serial numbers etched onto the control covers, but this example doesn’t have one so its serial number is long gone. Fortunately, there are other ways to establish the manufacturing date of vintage Gretsch guitars because a diligent researcher called Edward Ball has correlated Gretsch’s ever-changing features with specific production batches. 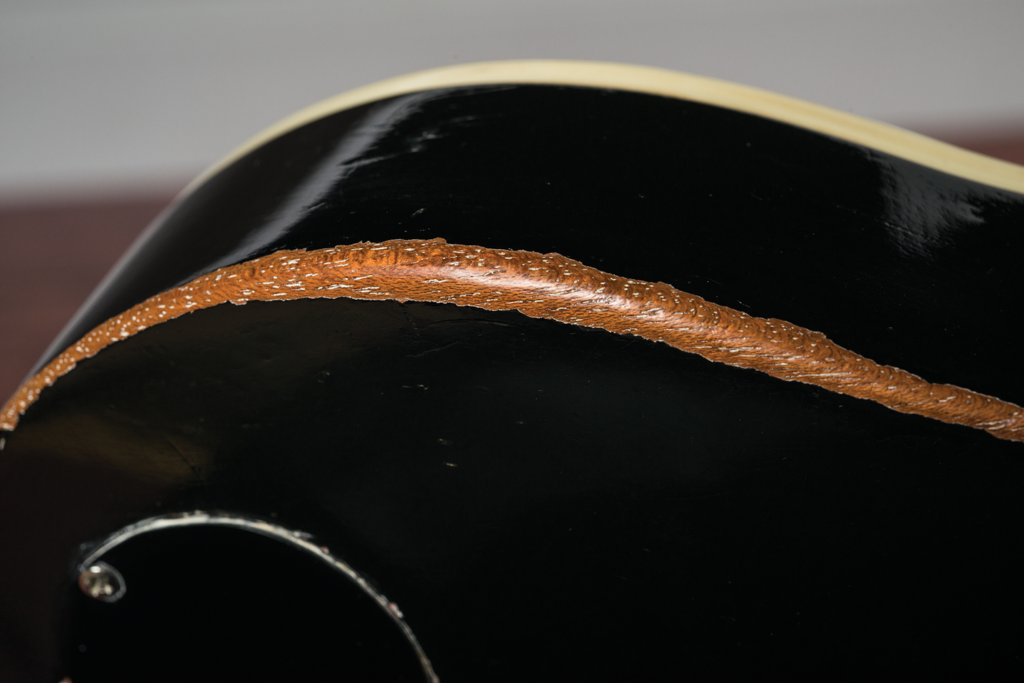 In his book Ball’s Manual Of Gretsch Guitars 1950s, Edward reveals the earliest ’55 model 6131 Jet Firebirds were actually made in 1954. They can be distinguished from the later versions by the white Gretsch logo on their teardrop-shaped pickguards and bullet-shaped red truss-rod access covers. The 1956 model Jet Firebird had a black pickguard with no logo and a longer black teardrop truss-rod cover. For ’57, Gretsch went to hump block fingerboard markers with G-stamped knobs.

This 6131 has only ever been fitted with the longer truss-rod cover, and two of the knobs are later replacements with the G stamp. I pulled out the two volume pots and found they were 1Ms made by IRC during the 42nd and 43rd week of 1955 (ie, October). There is a possibility that this guitar was made very late in 1955, but Gretsch collectors would consider this a ’56 spec Jet Firebird nevertheless.

Although Waverly tuners enjoy an exalted reputation these days, those fitted to vintage Gretsches are not everyone’s cup of tea. All the tuners on this guitar are original with straight shafts and no corrosion of the chrome plating. Having said that, some are extremely stiff to turn, which makes tuning up a bit of a chore – especially with the Bigsby fitted. On the positive side, once this guitar is in tune, it tends to stay in tune. 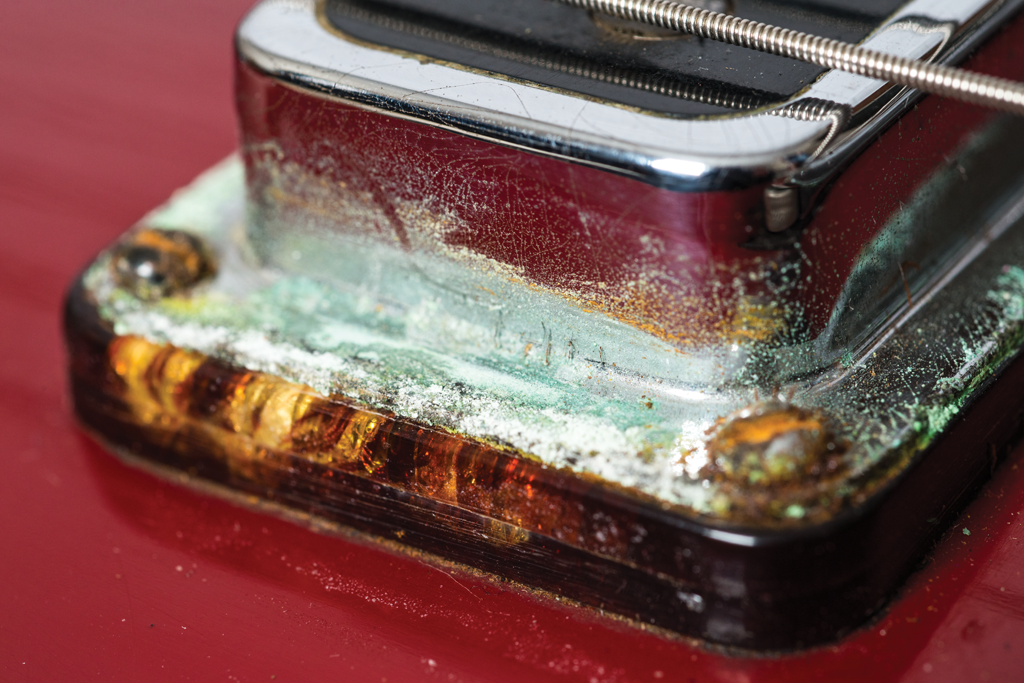 Gretsch used celluloid risers for DeArmond pickups and they tend to deteriorate. This `gassing off’ can damage the lacquer and the metal parts, as seen here. Fortunately, replacement risers are available and this pickup could probably be polished up, but action is required

One of the biggest issues with old Gretsches is gassing off. You could say it comes to all of us with age, but in Gretsch’s case we’re talking about the gasses emitted by deteriorating celluloid parts. Thankfully, Jet Firebirds weren’t fitted with tortoiseshell celluloid pickguards like the Round Up. However, celluloid was used for the pickup risers, and the bridge riser has started to degrade.

In the process, it is eating into the bridge pickup’s plating and creating a layer of green-ish oxidisation. It’s still at the stage where this tarnishing could be polished off to restore the metal, and some lookalike risers made out of a more stable material could replace the originals. Putting the old ones in an airtight bag for posterity would ensure that this otherwise clean guitar doesn’t deteriorate any further. 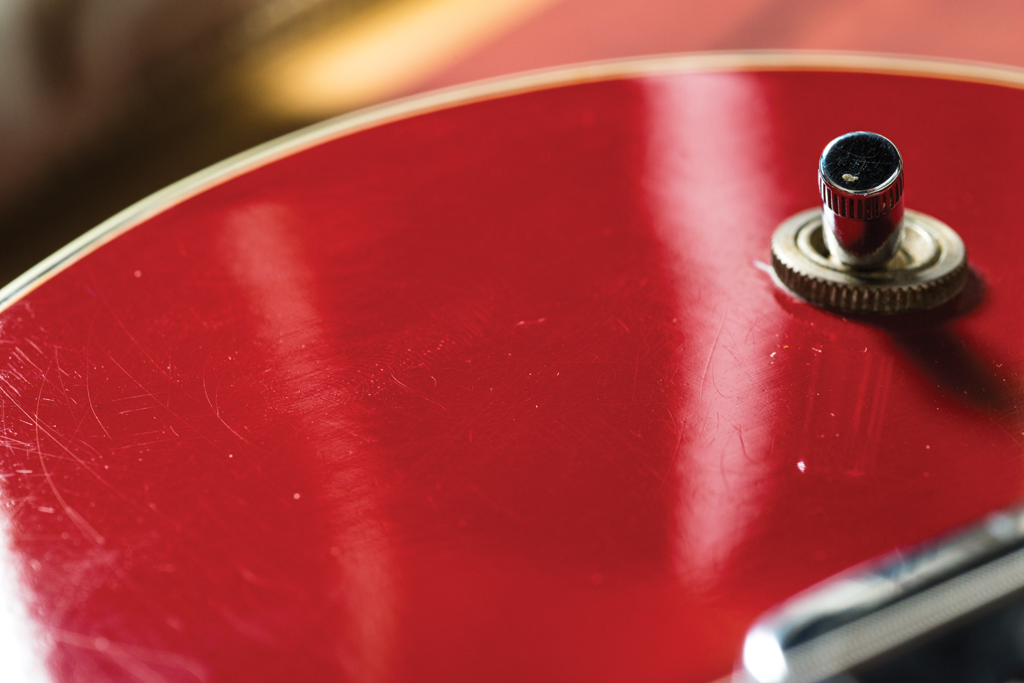 The top is in fine condition because it was never lacquered. It’s the same Nitron plastic covering that Gretsch used on its drum kits

The Bigsby and the Tune-o-matic bridge are non-original. Factory fittings for this model would have included a G stamp tailpiece and a Melita bridge – arguably the first guitar bridge with individually adjustable string intonation. Both items are in the case, along with what appears to be a period strap. Although it’s understandable that any Gretsch player might want a Bigsby, the Melita has most likely been retired for practical reasons.

It’s possible it was swapped because a shift in the neck angle meant it wouldn’t adjust downwards far enough for a low playing action. Under black light,  some filling in and touch-up can be seen along the body edge of the heel, which supports this theory. Also, the replacement bridge is adjusted about as low as it can go.

However, it’s also possible the Melita bridge was replaced because the bottom is curved. If you lay it on its base, it rocks along its length – just like some Gibson ABR-1s after decades of downward pressure has bent them out of shape. This flattens the string radius relative to the fingerboard radius and can adversely affect playability. 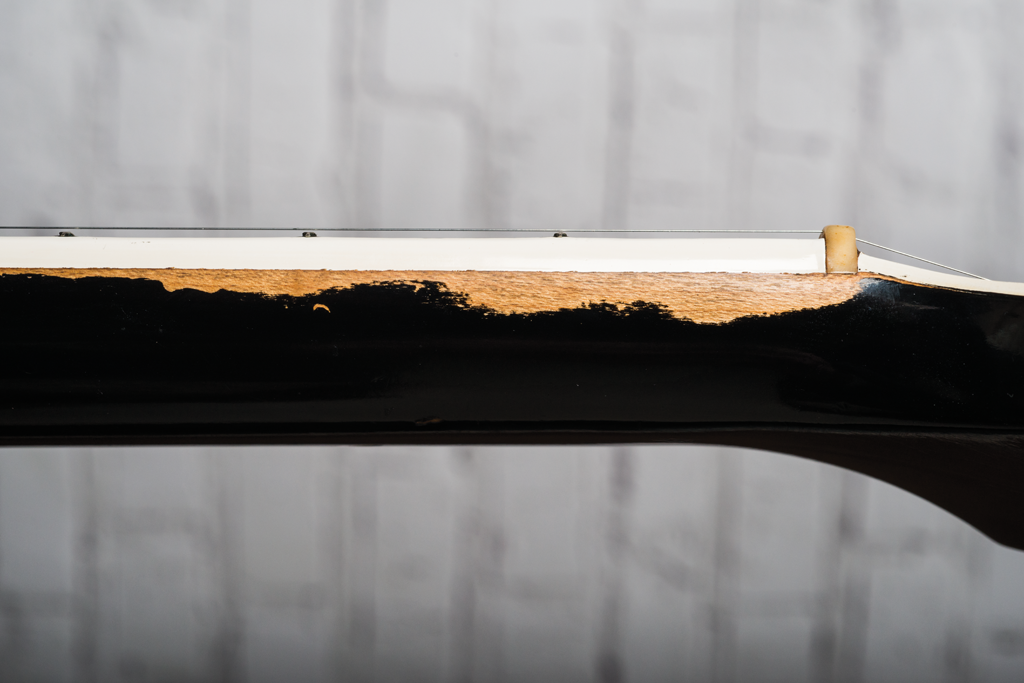 The neck is mahogany too, as you can see from this area of playwear at the cowboy end

Although it has been well used, this Gretsch is in fine shape. Those Nitron tops were pretty tough, so the front of the guitar retains its vibrant scarlet colour, and chips and checking will never become an issue.

The playwear is confined mostly to the back, where the mahogany can be seen through chips and rub-through around the edges. There’s more exposed wood on the edges of the neck up at the cowboy end, but overall it’s a vibey look, and this Jet Firebird feels clean and solid. Best of all, there’s no trace of binding rot.

The body may have extensive chambering, but it’s as weighty as a regular solidbody – albeit a fairly light one. The neck has a palm-filling deep D profile and these appear to be the original skinny frets. The binding nibs may have worn away, but the frets themselves have plenty of life left in them.

There is relatively little break angle over the bridge and the low E does tend to pop out of its saddle slot when it’s strummed or picked with force. The action is fairly low and a slight upwards adjustment may help to prevent this without compromising playability. The groove in the low E saddle could also be filed a tad deeper – and although neither procedure would cure the underlying issue of the neck angle, it would be a perfectly good workaround. Even as supplied, this guitar plays way better than most of the 50s and 60s Gretsches I have encountered. 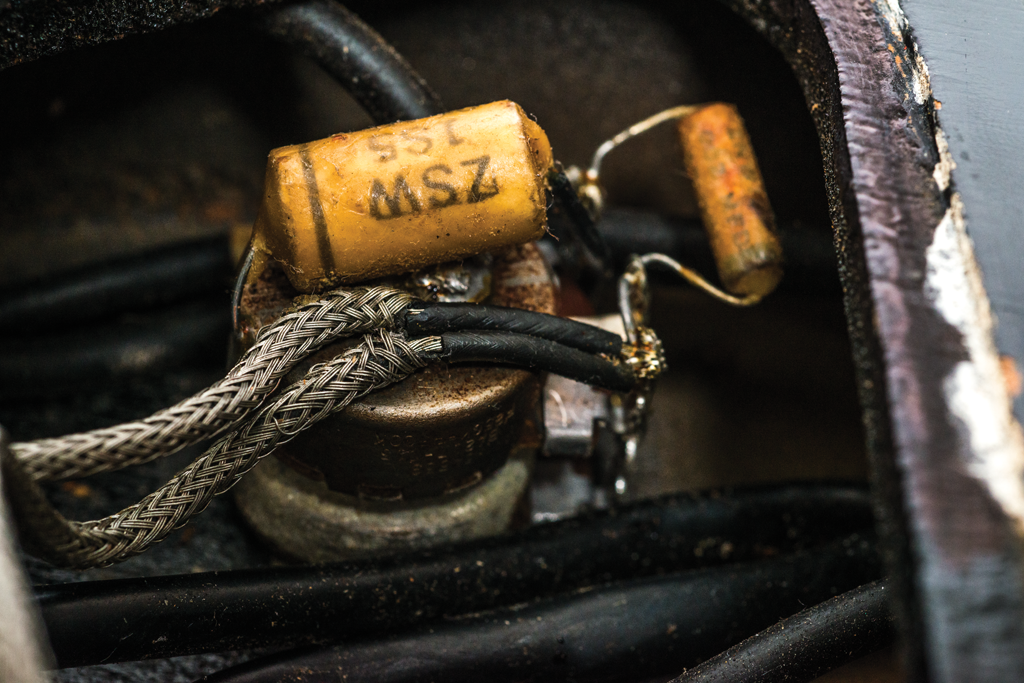 Chet Atkins famously disliked DeArmond pickups. I’m certainly not qualified to question the great man’s opinion, but I do struggle to understand it. To my ears, these pickups sound remarkable, and they have a completely unique sound. For starters, they combine serious output level with an ultra-clear and high-fidelity tone.

The treble is wide open but extremely smooth and defined, and this is mixed with warm mids and a bass response that can punch holes. String-to-string balance is very even, too.

Maybe Chet didn’t appreciate the way these pickups can push a valve amp into overdrive but, let’s face it, that’s exactly what most of us enjoy these days. Fortunately, this guitar doesn’t muddy up when you turn down, and in clean mode the bridge pickup has a Tele-like twangy cut that’s both funky and countrified. 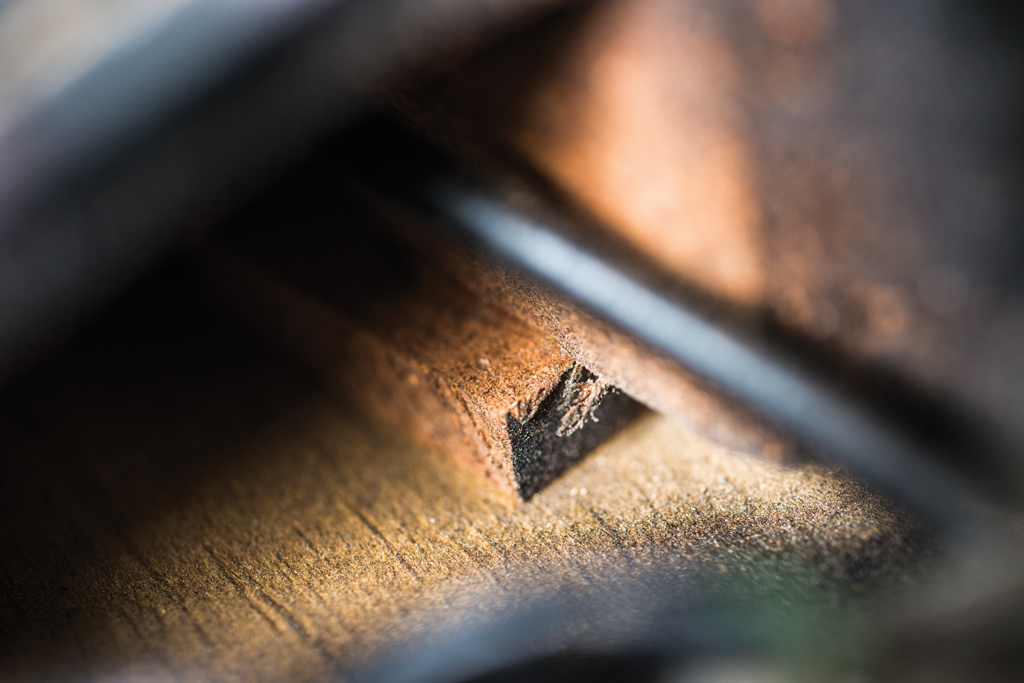 The extensive body chambering can be seen inside the control cavity

I’m surprised that more jazz players aren’t hip to these DeArmonds in the neck position. There’s a mellow and bell-like roundness, along with a lively and articulate response. As is so often the case on guitars with contrasting bridge and neck pickup sounds, the middle position provides a third distinct tone.

A slightly hollow phasiness seeps into the sound and there’s just a hint of honk in the upper-mids. Roll back the tone control very slightly, reach for the thumb pick and you’ll be rewarded with utterly authentic mid-50s Travis picking and rockabilly goodness – no slapback necessary. You can fine-tune the sound by re-balancing the pickups using the individual volume controls, but best of all is the solid thwack you get off the low E string – even when you palm mute. 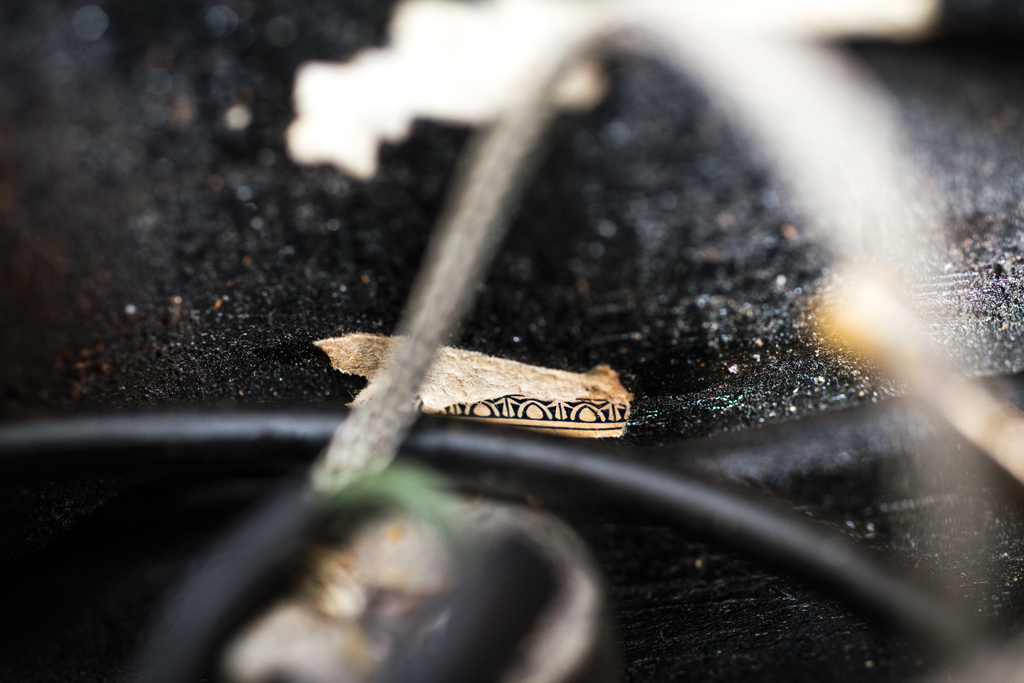 However, it’s not all retro, because this guitar scythes through overdrive. Powerchords are enhanced by jangly treble and you probably couldn’t get the low end to mush out even if you tried. There’s even enough sustain to solo without having to try too hard, but the transient attack is livelier by far than any sort of Les Paul, and you might struggle to get the snarl of a P-90 or even a Filter’Tron.

If you stand too close to a cranked-up amp, you can get some squeal, but DeArmonds are known for that. It’s sometimes caused by the mechanical bits dangling beneath – and you can go a long way towards curing the problem by wrapping the parts tightly withelastic bands. 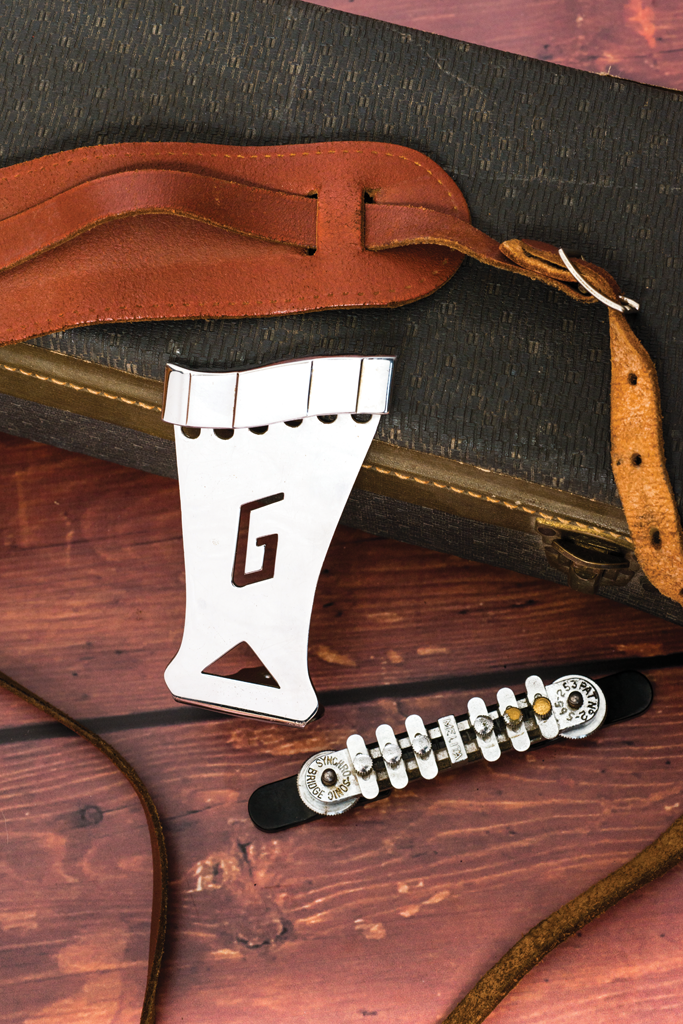 Gretsch had a lot of trouble with neck joints, particularly with the solidbody models. It was factory policy to simply replace necks with current production necks when guitars were returned for warranty repairs. Therefore, it’s quite exciting to see a mid-50s Jet Firebird with its original neck complete with block markers rather than thumbnails.

Ideally, this guitar would at some point be treated to a neck re-set, but it’s wonderfully playable as it is. To my eyes, it’s one of the most drool-worthy and charismatic vintage guitars I have ever laid eyes upon, and in this instance, the quirky Gretsch controls make complete sense. It’s an absolutely superb instrument. 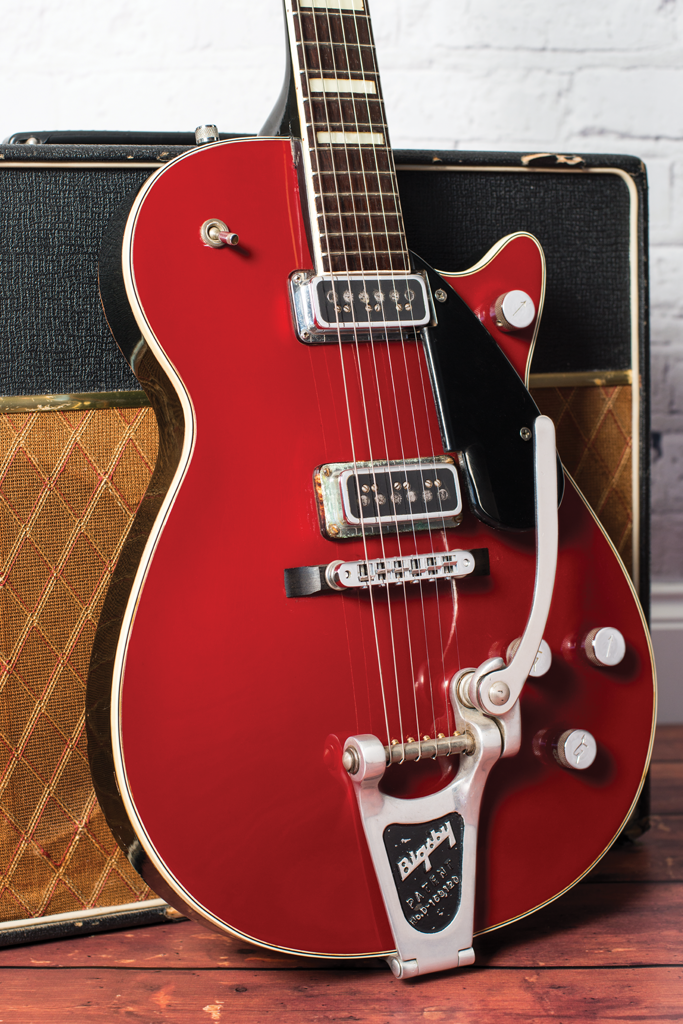