This barely-played 50s Strat has the unblemished appearance of a modern guitar. However, as we find out, it plays and sounds like a vintage dream…

Originally given to The Music Guild in California by Fender as a promotional item, this Stratocaster was sold to its original owner for $331.71 in March 1956 and was virtually unplayed for the next 40 years. Besides a touch of wear on the edges of the neck and middle pickup covers, ‘as new’ would not be an unreasonable description. Opening the case, complete with original candy, really does feel like a spine-tingling, ‘time capsule’ moment.

The neck is dated January ’56, while the one-piece body has a label in the control cavity that’s hand-signed ‘Gloria’ and dated Valentine’s Day 1956. Lifting the scratchplate also reveals a hand-altered wire channel and factory-fresh wiring with all the original parts in situ and the spring claw grounded to the volume pot. 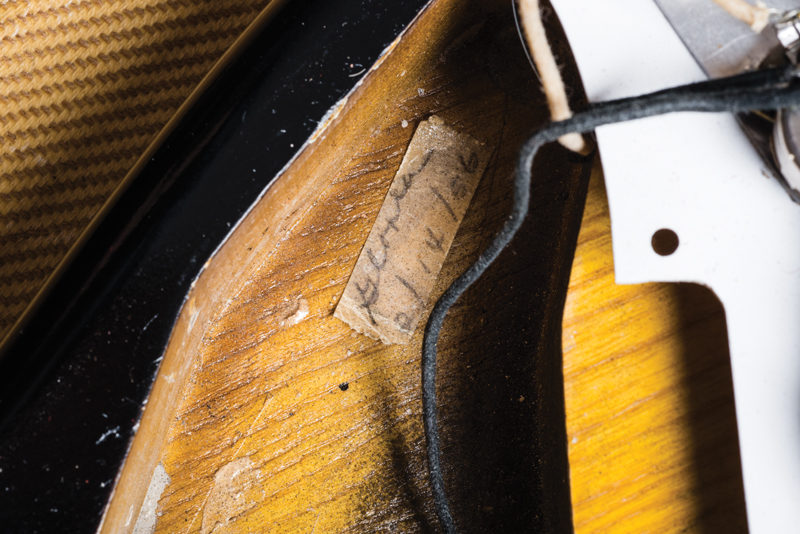 While researching early Strats for a ’54 replica project, I learned that Fender tried three types of two-tone sunburst while it was figuring out the best method. This appears to be version two, with a yellow-stained centre section transitioning to dark brown edges. 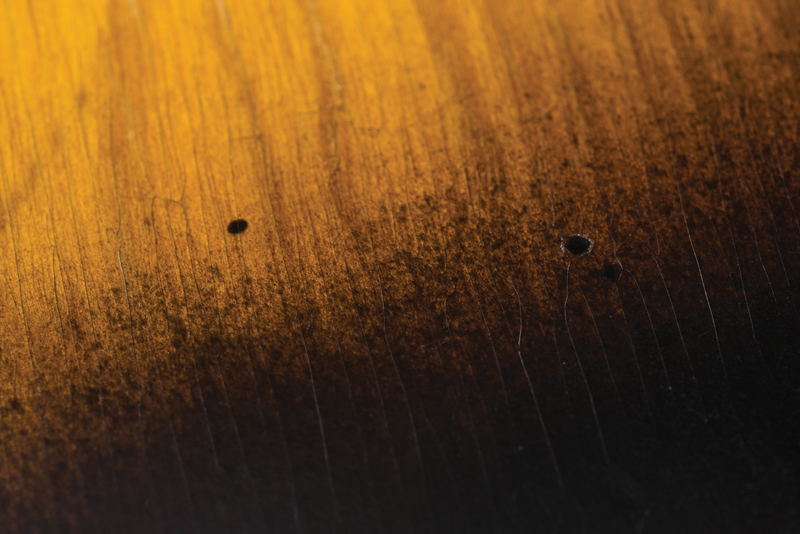 Until 1956, Fender didn’t cut and polish after the lacquer had cured. Instead, the bodies were sanded once sufficient coats had been applied and a few thin clear coats were then sprayed on top to bring up the gloss. It’s clear this body was never polished out and the outer edges of the burst are crude with stray brown blobs in the yellow. To be honest, a gifted amateur would be able to match it. 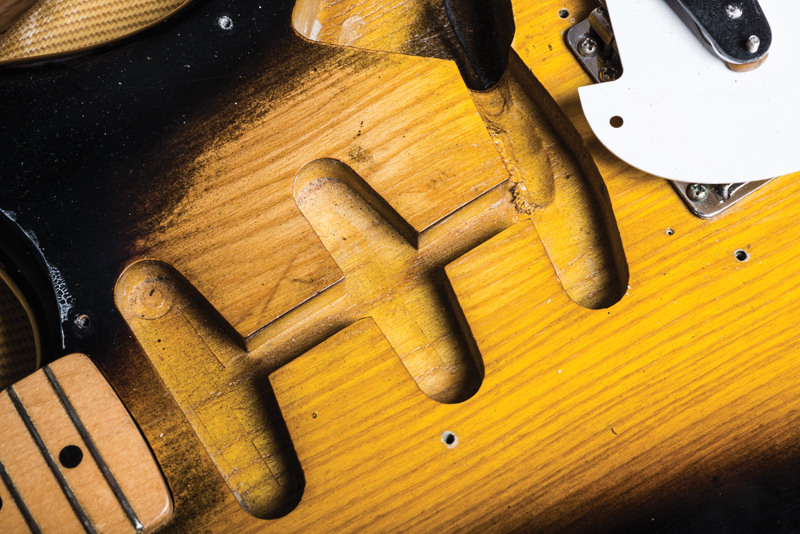 In contrast, the neck does have a smooth gloss finish and the decal is in perfect condition. It looks as if a fine sealer coat was misted over the front of the headstock after the decal had been applied. The side dots measure 3/32” in diameter and the profile is a chunky C with a hint of V nearer the headstock. 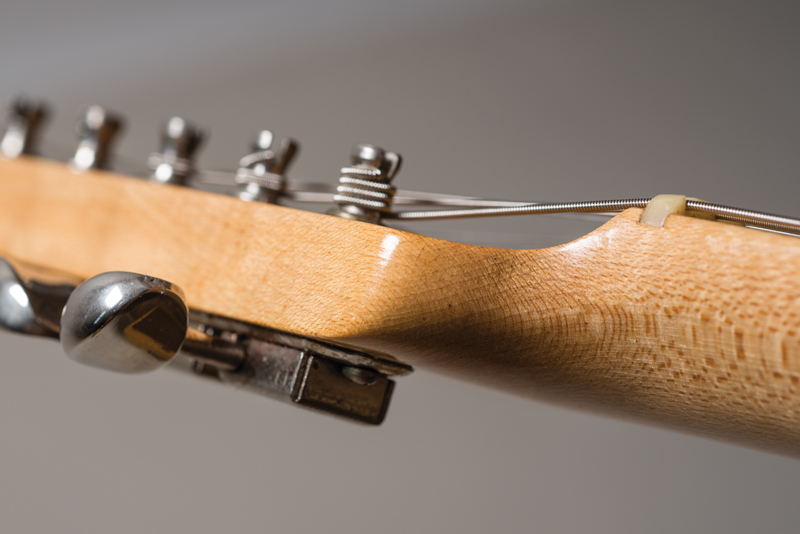 It’s often said that pristine vintage guitars are the ones nobody played because they weren’t very good, and decades of playing are needed to make guitars really resonant. This unplayed ’56 Stratocaster is in factory-fresh condition and it becomes clear that neither theory can be taken as gospel.

It’s an odd sensation to play this Strat because it feels and sounds both old and new. Nothing on this guitar feels worn, so the no-line Kluson tuners operate smoothly and there’s no slack. Every note rings out crisp and true, and to all intents and purposes it feels like playing a contemporary high-end Strat. However, the tiny frets and big neck do feel as if they’re from another era.

The acoustic tone is very clear and airy. It has all the snappy brightness you would expect from an ash-bodied Strat with a big maple neck, but there’s also plenty of woodiness and you can feel the whole body vibrating when you play chords. This is definitely a live one and it holds tuning superbly.

The intonation leaves something to be desired because it has probably never been adjusted. Although Fender went to the trouble of designing a bridge with six saddles that were individually adjustable for height and intonation, it seems it didn’t do much in-house setup work. 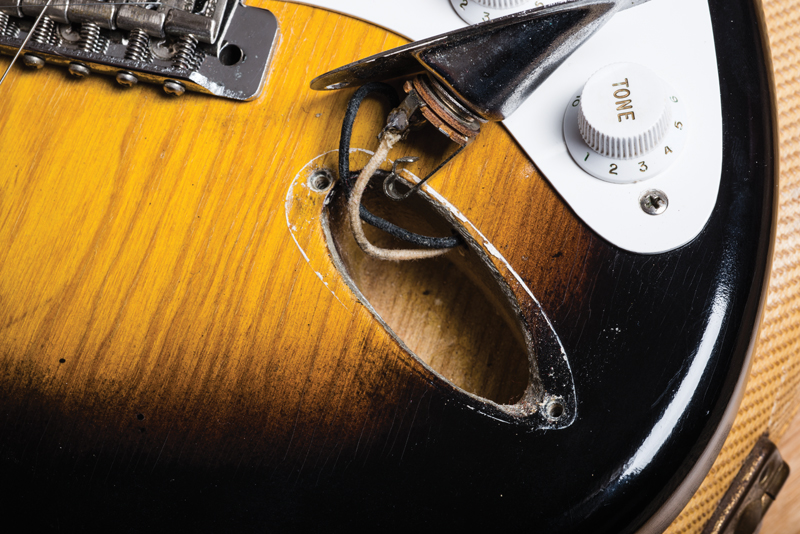 Judging by the condition of the various screws, they haven’t been touched by a screwdriver or allen key since this guitar left the factory. All six saddles line up like soldiers on parade and the string radius is almost flat. Maybe retailers were expected to perform setups according to customer preferences at the point of sale.

Even so, this guitar plays effortlessly with a set of modern 10-gauge strings and the bends feel really slinky. The action is extremely low but somehow it all works and there’s no choke out or fret buzz. The neck tone control doesn’t have much effect until it’s rolled back past halfway. 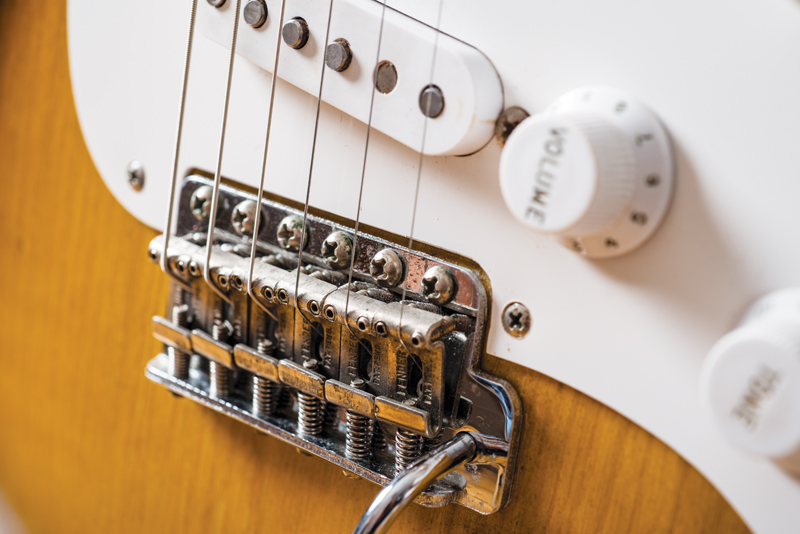 Below that, everything happens so fast it’s almost like a switch. The middle tone control will need some cleaning up before it works properly, but judging by the neck control the potentiometers may not have a modern audio taper.

The earliest Strats had alnico III magnets, but Fender soon changed over to alnico V. The sprangy high-frequency response of these pickups leaves me in little doubt that they are loaded with alnico V slugs and, by any standards, this is a bright and wiry sounding Strat. So much for the boot-eek pickup manufacturers’ marketing spiel that 50s alnico V is equivalent to today’s alnico III. 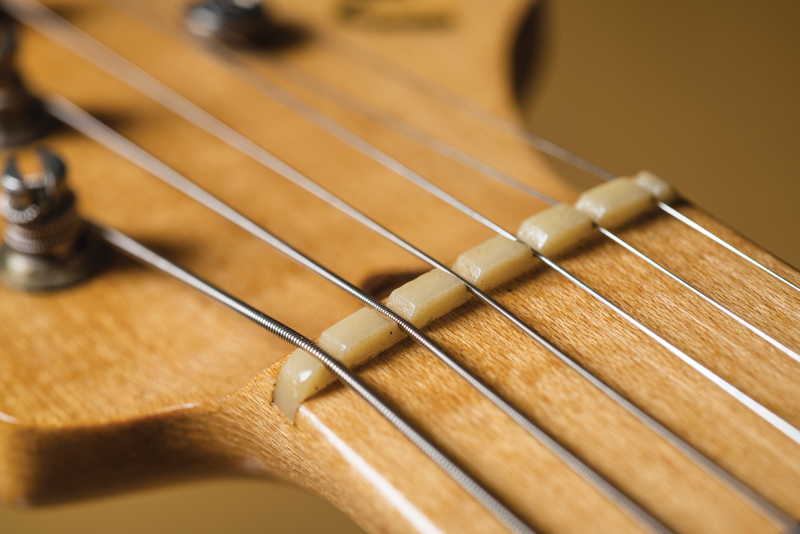 If you like glassy, crystal-clear Strats, this would be a dream guitar. Plugging in with your usual settings is unlikely to produce the best results because this ’56 can sound a bit edgy and metallic through modern amps. Bear in mind this guitar was made in an era when guitarists often used heavier-gauge nickel strings with a wound G. 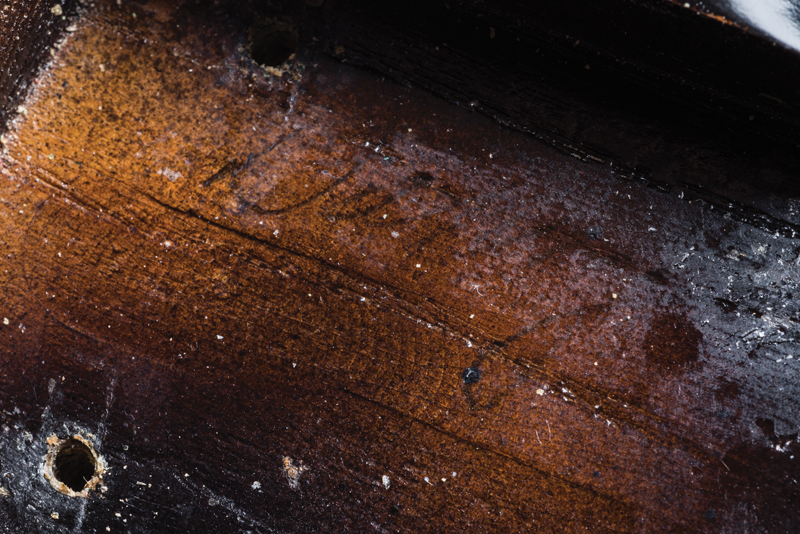 Fender amps from the early to mid 50s can sound quite dark in comparison to later amps. I tried this guitar through a ’51 Deluxe and it sounded just right with the amp’s tone control set around halfway. Normally, I play the amp with no treble roll-off, so it seems Fender guitars and amps of the same era really were designed to work together. 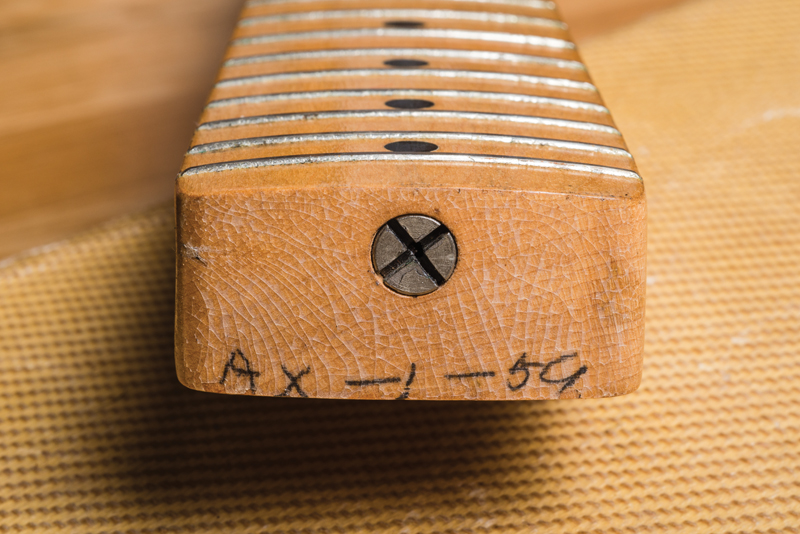 The skinny low frets aren’t conducive to bluesy soloing, although the guitar’s tone most certainly is. I found the ’56 best for chord work because of its clarity and natural shimmer. Each pickup sounds distinct and the range of tones, from the woody neck to the snappy quack of the bridge, is wider than usual. Finding the in-between settings is a chore with the three-way switch, but it’s worth the effort for the softer treble and transients. 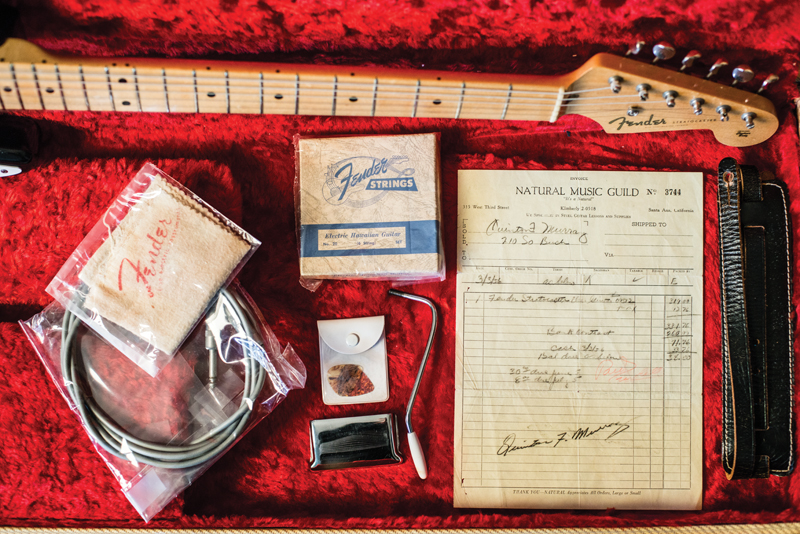 At first glance, this Strat may appear and feel more like a mid-80s Japanese reissue than a genuine vintage instrument or even a Custom Shop concoction. However, the tone has way more depth, character and complexity. If you could live with the intonation, which isn’t that bad, you could take this to a gig and be confident of a toneful and trouble-free night. It’s one of the easiest-playing Strats I’ve ever encountered. In fact, it virtually plays itself. 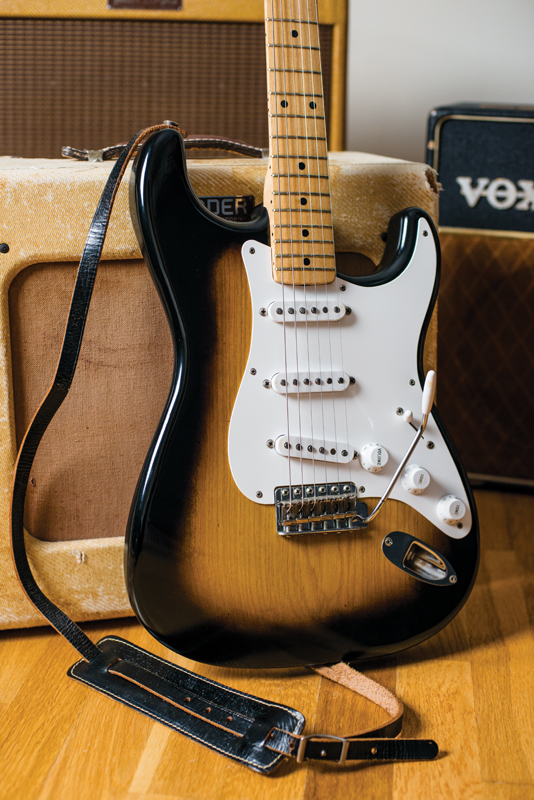