The TV Model was Gibson’s response to Fender’s Telecaster – a simplified classic. We take a look at a near-mint ’56 example… 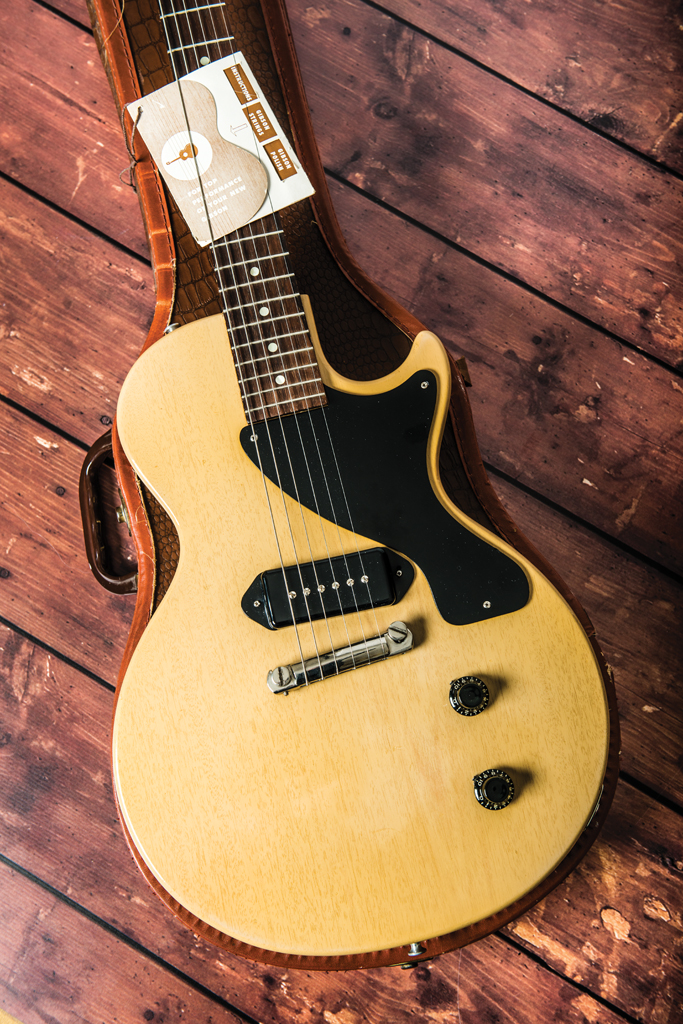 Although most of us probably call these guitars Les Paul Juniors, strictly speaking this is a Les Paul TV Model – as it says on the headstock. The Junior designation was reserved for guitars with cherry or sunburst finishes.

A recent conversation with renowned guitar restorer Clive Brown provided a fascinating insight when he pointed out something that’s blindingly obvious but often goes unnoticed: in the early 50s, Gibson was worried about the Telecaster, and its response to competition from Fender was the TV Model with its opaque blonde finish and single-ply black pickguard. The TV was, by Gibson standards, a simplified solidbody that was quicker and cheaper to build. Perhaps the clue is in the name – Fender had the Tele, so Gibson came up with the TV. 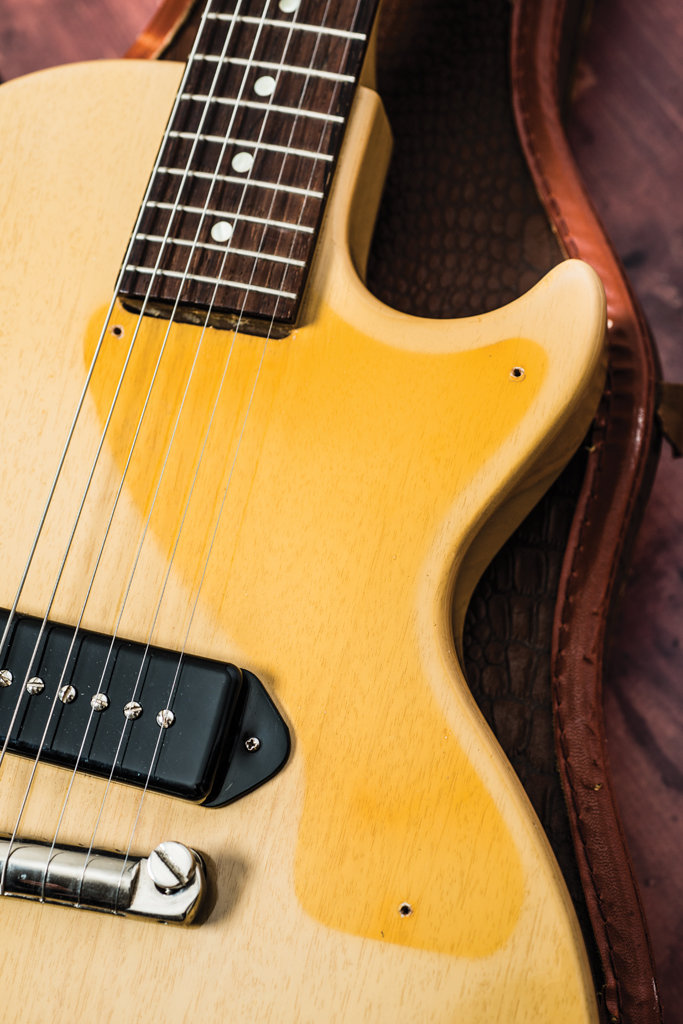 Even those who are accustomed to handling vintage guitars might find this one out of the ordinary. Naturally, guitar shops have to cover their backsides in their descriptions, but when Vintage Guitar Boutique describes this 1956 Les Paul TV Model as having ‘only very minor dings’, it could almost be accused of overstating the damage.

There are just a few superficial lacquer chips and some tiny dents that I struggled to find. There is a speck of wood showing on the corner of the heel, but that was probably a buff through done at the factory, because this guitar can’t have been used enough for it to be play wear.

It’s a 60-year-old instrument that looks and plays as if it just left the factory. The only signs of its age are the way the lacquer has sunk into the wood and a few small areas of lacquer checking. It doesn’t even have the musty smell of a guitar that has been case-bound for over half a century. If I didn’t know better, I would think it was one of the best pieces ever to have emerged from Gibson’s Custom Shop. 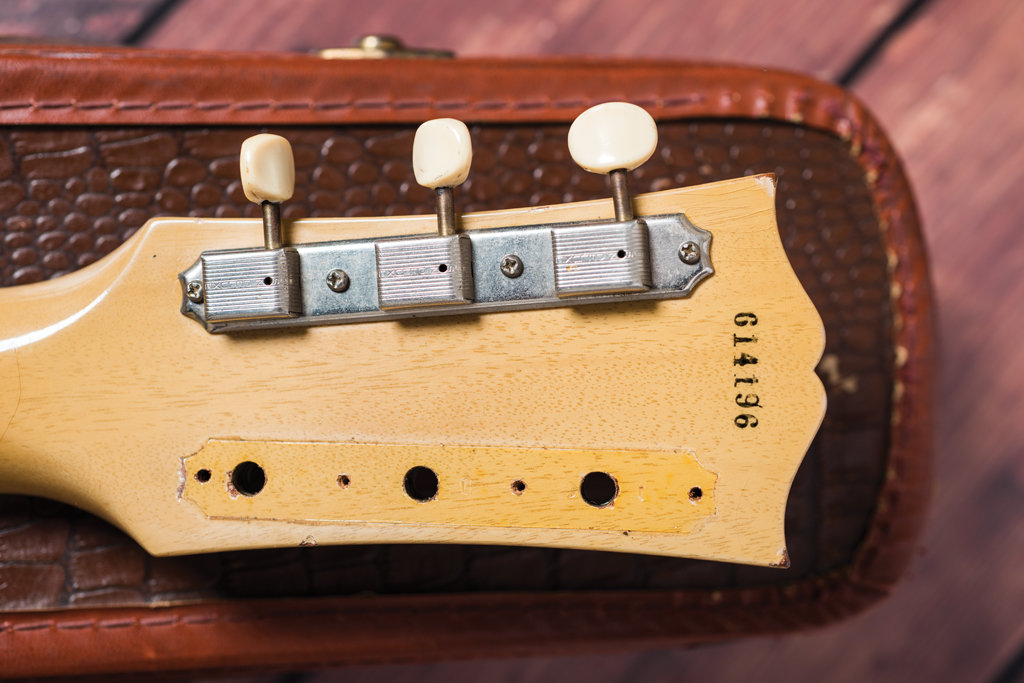 There is much debate about how Gibson executed the TV finish and how surviving examples differ from when they were new. With some guitars, you can pop off the pickguard to find an area of finish that hasn’t been exposed to UV light and get a sense of how it looked originally. When I removed this pickguard I was surprised to find a darker butterscotch colour with a tan line conforming to the pickguard shape. 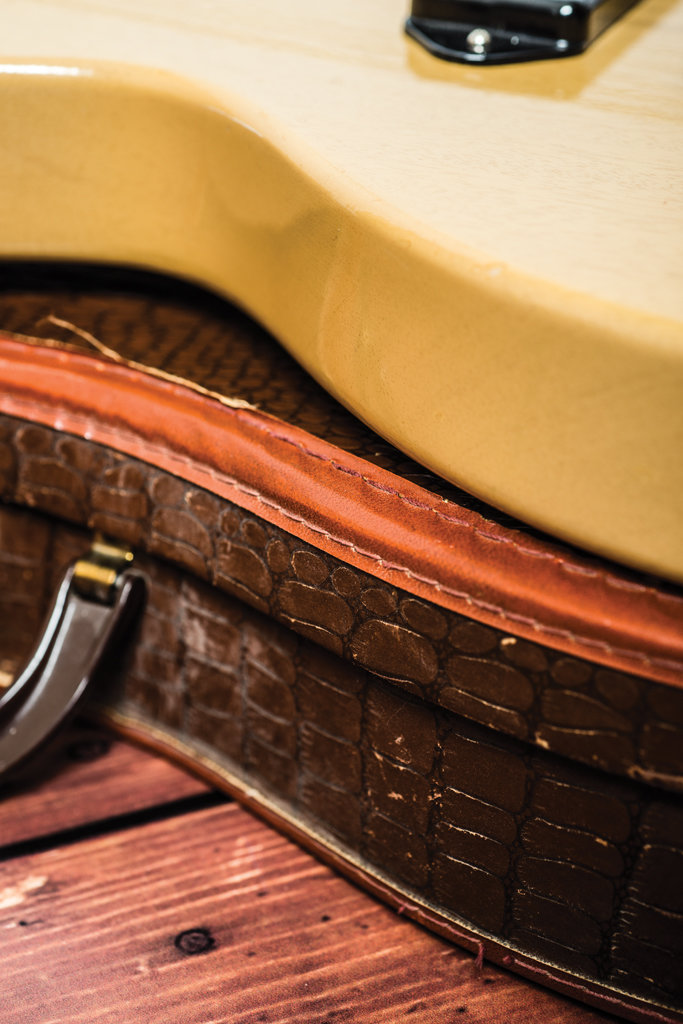 It seemed unlikely that this could have been the original colour. UV light tends to yellow up and darken pale and clear finishes, so under normal circumstances the area under the pickguard should be lighter. As always, Clive Brown cleared up that issue, along with several others.

Brown says the darkening of the finish is due to a chemical reaction between the lacquer and the pickguard. He suggested lifting off one of the tuner plates to see what the colour was like underneath. 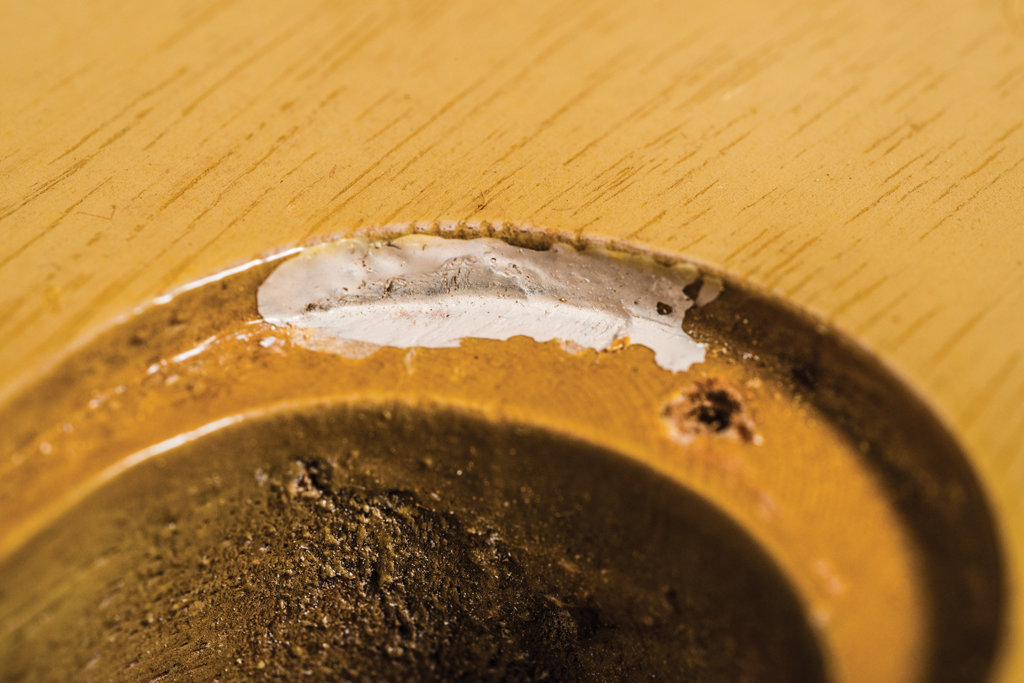 Sure enough, the finish under the tuners has a fresher, yellower appearance than the surrounding areas on the headstock, which indicates the tone of the overall finish has become slightly less vibrant. Having said that, the hue does vary considerably all over the guitar – particularly where the neck transitions into the headstock and around the heel and cutaway, where it’s darker. I had assumed this was play wear, but again Clive set me straight.

These guitars were held by their necks while being sprayed. Once the body and headstock had been completed, guitars were hung up to spray the backs of the necks. Certain areas would have ended up with a few extra tinted lacquer coats – hence the darker shading.

The control cover edges indicate it was probably hand cut and shaped for final fitting, and there’s more finish darkening around the cavity ledge. This supports Brown’s theory. There’s also an area that is much lighter, and its paste-like appearance suggests this could be the grain filler Gibson used to create the opaque TV finish prior to applying lacquer. Brown also mentioned that Gibson sometimes brush painted some sort of emulsion over the lacquer in this area, for reasons he has never been able to ascertain. 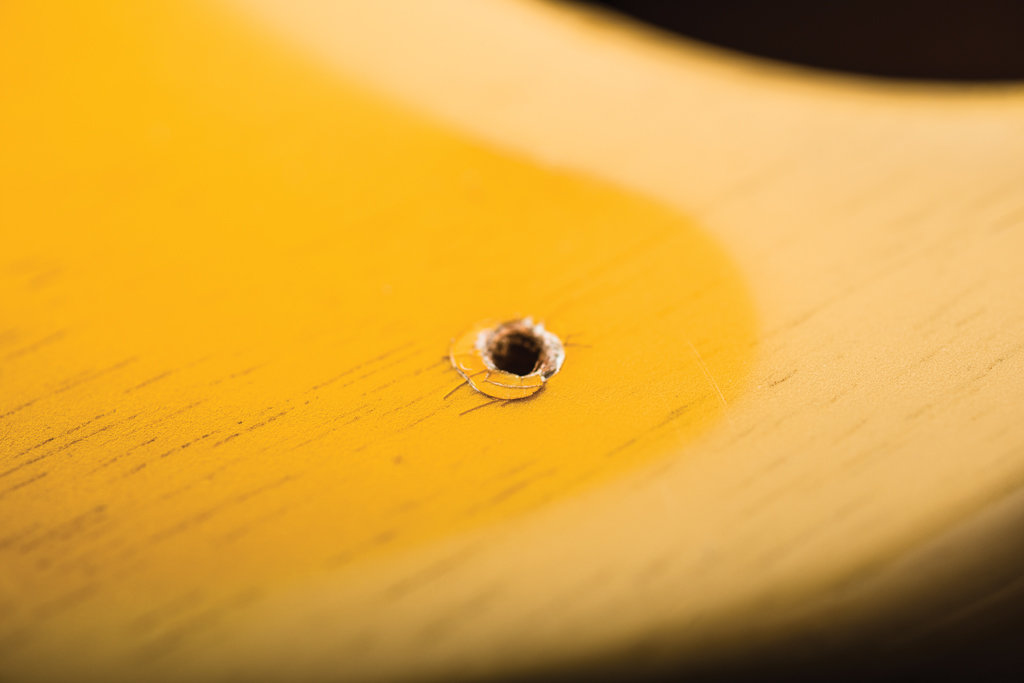 Gibson’s preparation and clean-up on the TV models might not have been quite as diligent as on upper-end Les Pauls and jazz guitars. This is evident in the cutaway and around the heel, where the finish has been applied thickly over an imperfectly sanded surface.

Gibson probably deemed this good enough for the kids who played these guitars, and it adds to the period charm. The controls have never been touched, so I felt no need to pull anything out and hunt for date codes. Everything looks as it should, with the correct braided pickup cable and an earlier-style paper/oil ‘bumblebee’ capacitor soldered to the volume control’s centre lug. 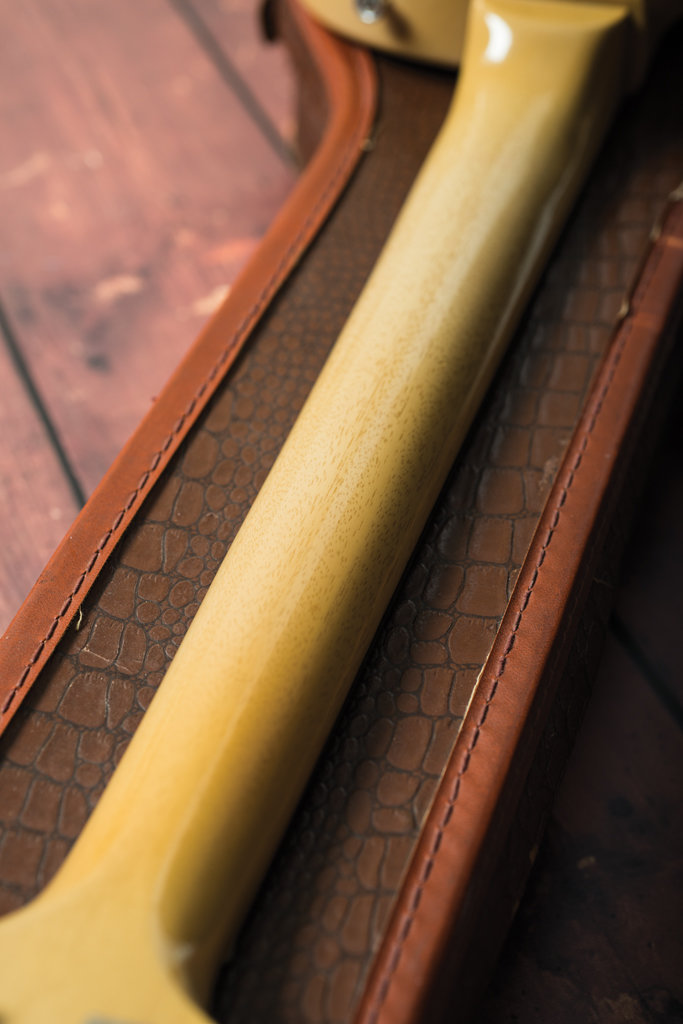 Regular readers may recall our recent mid-50s Les Paul Goldtop shoot-out, where the ’54 and ’57 necks were more notable for their similarities than differences. The TV’s neck is nowhere near as fat and it has a modern feel with a comfortable deep C profile that isn’t clubby. However, the skinny frets feel as if they’re from an earlier era and may divide opinion. They are almost as-new, and I had no difficulties with them.

Almost all set-neck mahogany guitars with wrapover tailpieces sound very resonant acoustically, but this TV has an extra layer of airy chime over the harmonically loaded mids and full bass. The low E and G nut slots are a tad low, making those strings buzz when they’re played open, but it’s an easy fix. 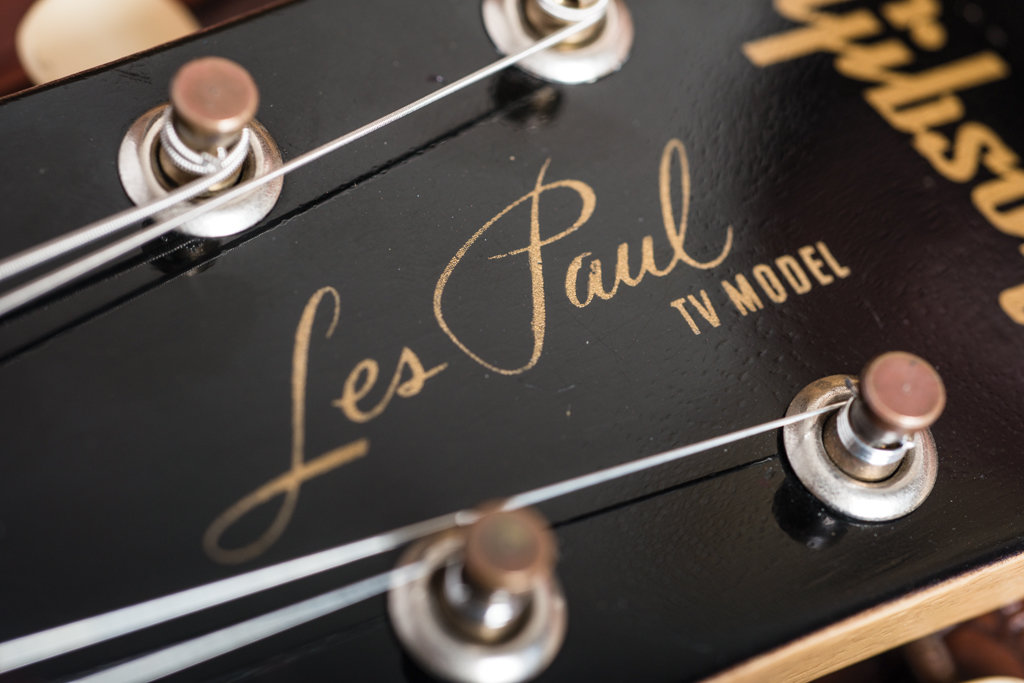 Common themes are beginning to emerge with these vintage features. The pickups always seem to be microphonic and, at least with 50s Gibsons, there are no areas where the control settings can’t be used. This TV can go from a roar to a whisper on the volume control alone without loss of clarity.

In fact, something cool happens with the volume set to seven or below; that upper-harmonic thing becomes more apparent in the electrified tone. Strum or pick gently, especially with your fingers, and there’s an eerie sensation that somebody’s playing along with you on acoustic guitar. 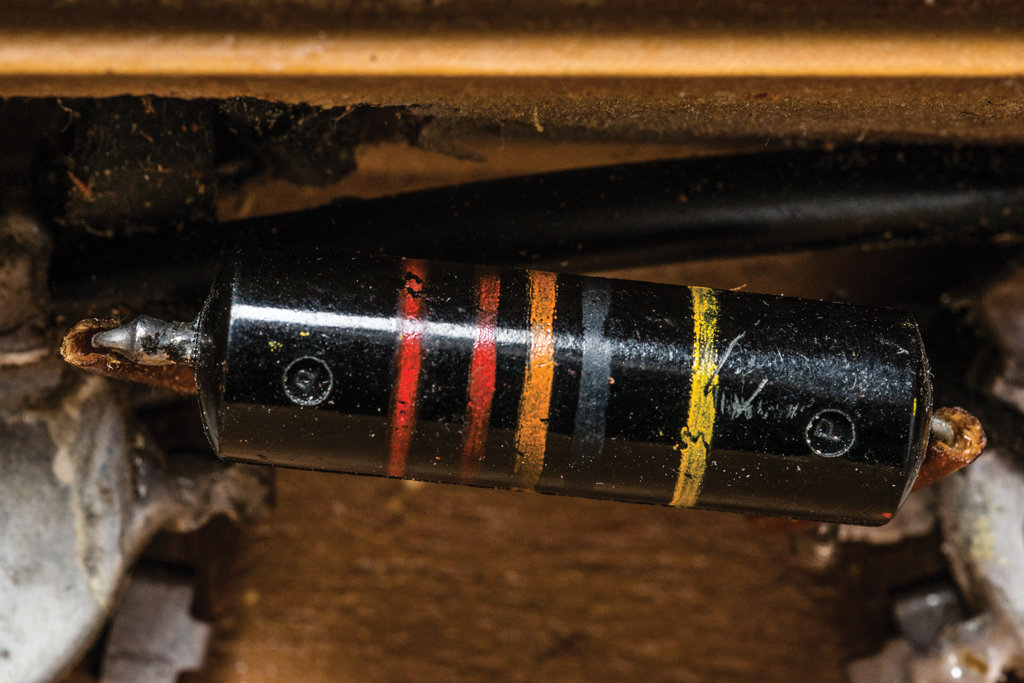 At full throttle, the tone is woody and weighty with ample sustain. It’s more raucous and fuzzier in the bass than a P-90-loaded Goldtop, but the TV is about rock ’n’ roll attitude not feedback-free jazzy refinement. So, whether you’re picking clean arpeggios, strumming a rhythm part or hammering out a blistering blues solo, this TV delivers the goods.

Playing powerchords through a cranked tweed is one of the most thrilling experiences I’ve had with an electric guitar. The tuners are a bit slack, the pots need a squirt of switch cleaner and the gleaming polepiece screws of the immaculate P-90 could be adjusted to compensate for a very slightly loud G string, but they’re minor issues. It’s a guitar that delivers as soon as you plug it in, and it’s almost effortless to play. 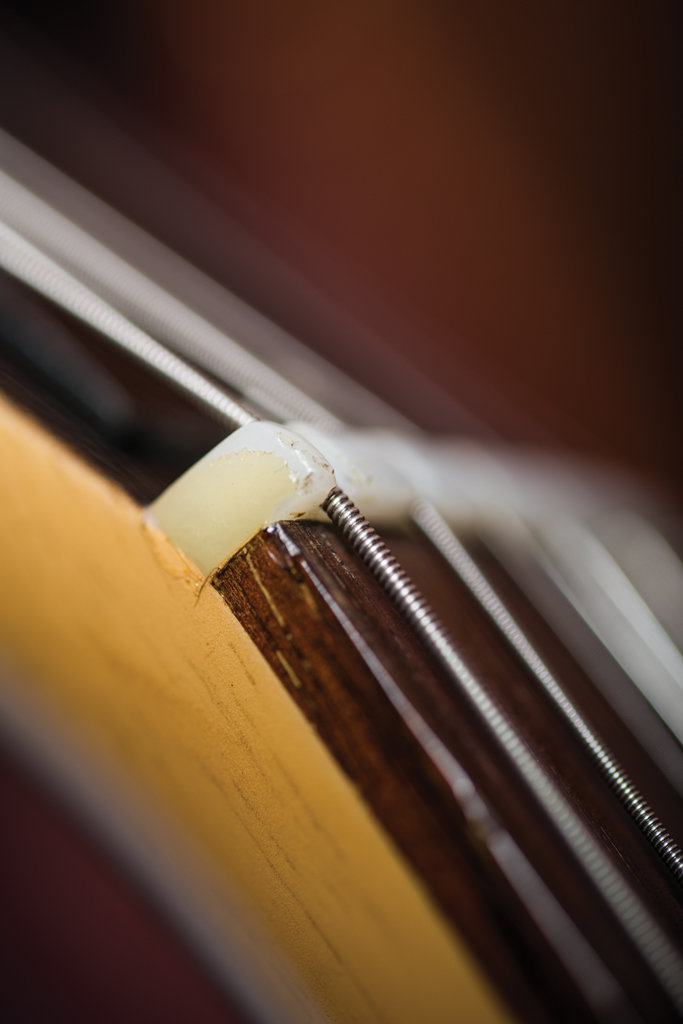 Imagine being a lucky American teenager given one of these for Christmas in the mid-50s. With a first axe like this, you’d have no excuse for not knuckling down to playing. TV Models might not fall into the ‘beginner’ category these days, but the same applies. Everything I tried on this guitar sounded wonderful and, in my opinion, the TV Model is one of Gibson’s greatest designs. Good luck finding a cleaner or better example. 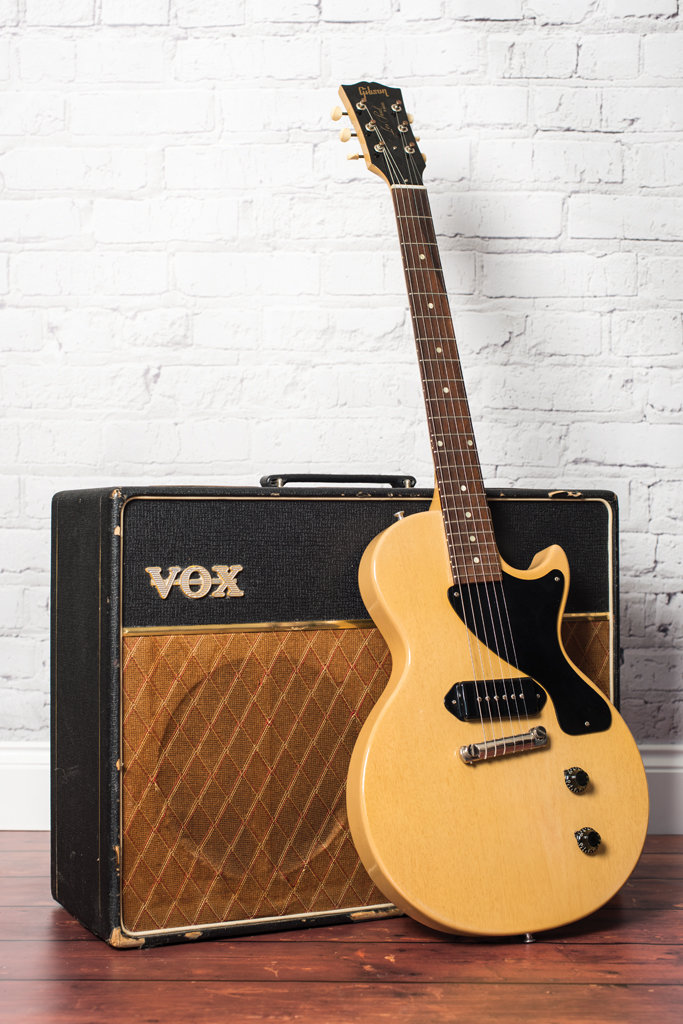