Forget your ’54s and custom colours, the most collectable Stratocaster of them all is the blonde and gold ‘Mary Kaye’. We get to grips with a well-loved 1957 model… 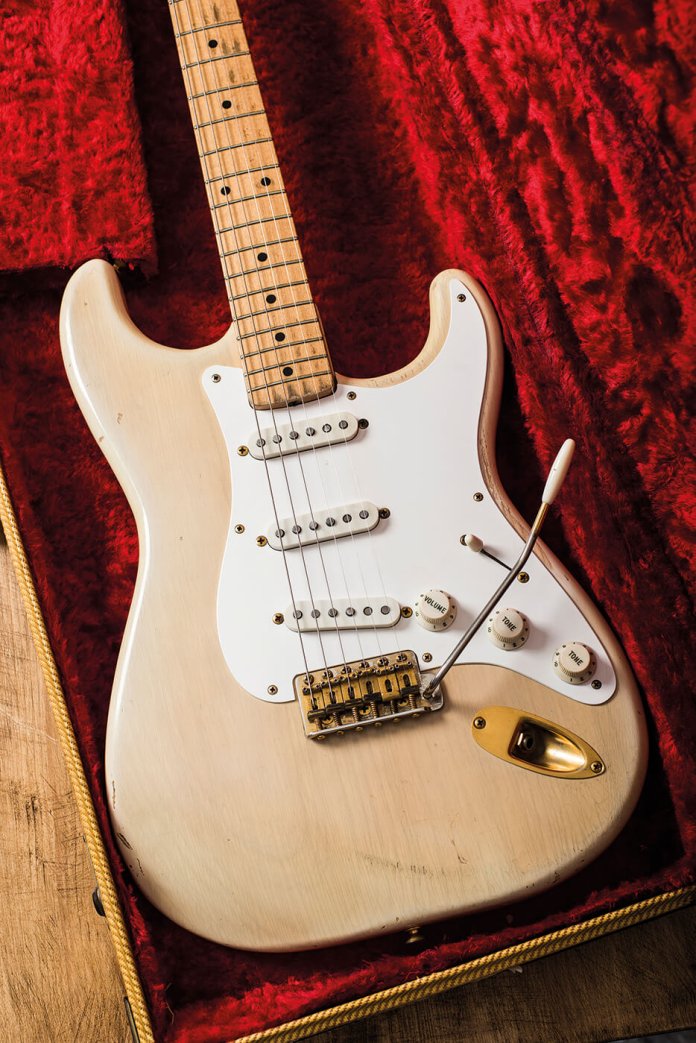 Back in the 1950s, Mary Kaye was referred to by some as “The First Lady Of Rock ’N’ Roll”, so it’s no surprise that Fender wanted to get its newfangled Stratocaster into her hands for publicity photos of the Mary Kaye Trio. However, she never actually used the Strat that assumed her name – Kaye was more comfortable with her custom-made D’Angelico archtop, and didn’t even own a ‘Mary Kaye’ Stratocaster until 2003, when she was given one with “To Mary Kaye, from your friends at Fender” engraved on the neckplate.

It could have been so different. In early 1956, Fender’s marketing genius Don Randall offered Mary (born Malia Ka’aihue) a Stratocaster and a tweed Twin amplifier, recognising that a famous guitar player sporting the revolutionary design surely wouldn’t hurt sales.

But while Mary was happy to use Fender amps, she politely pointed out that she “couldn’t give up my D’Angelico for anything”. Ever pragmatic, Randall asked if Mary would at least pose for a promotional photo with the guitar and amp. Mary agreed and later that year appeared with the Strat in a movie called Cha-Cha-Cha Boom!, but on both occasions the guitar was taken back to Fender, despite Mary being told she could keep it. She was working so hard, she never chased it up, and Randall later gave the guitar to Johnny Cucci.

Although there are rarer custom colour 50s Strats, the ‘Mary Kaye’-spec models are the most sought after among collectors. In essence they are typical 50s Strats, but the defining features are a translucent blonde finish over an ash body, and gold-plated hardware.

Irrespective of how many guitar fans now feel about gold-plated guitar parts, back in the 50s it was seen as classy. Gibson had just brought out the Les Paul Custom and the top Gretsch models all had gold hardware, so it must have seemed like a logical step for the Fender company wishing to be seen as credible to serious guitar players. After all, rock ’n’ roll was just a passing fad…

The example featured here is in well played but generally fine shape, and it carries a body date of April 1957 with a neck date from the following month. The body shape is exactly what we would expect from a Strat made during that timeframe, with radical contours and a more streamlined appearance than the Strats that came before and after.

Similarly the neck feels absolutely bang on, with plenty of depth but also a subtle V that makes it supremely comfortable and familiar. It really would be wonderful if somebody could crack the CNC router code for some of these 1950s neck profiles, because it’s not just the looks and the tone that makes so many vintage guitars special.

The fretboard lacquer shows some wear through in the lower registers and on the treble side around the rollover, but it’s almost completely intact on the back and we don’t believe it has darkened much over the decades. There’s a 3mm gap between the neck and the edge of the pocket, but it’s butted up tight on the bass side and the neck screws have been tightened so hard, the neck plate has bent and pressed into the body. This isn’t uncommon and the whole structure feels solid.

‘Blonde’ is an imprecise term for a finish that can vary so much, but this guitar’s body is somewhere between off-white and a very pale Dijon mustard. It’s also slightly lighter around the edges – like a negative burst – and extensive checking lines follow the grain, which is visible through the finish. We suspect this may be a one-piece ash body.

No doubt the gold plating here has lost much of its original lustre and the bridge saddles are worn through to rusted steel. It’s also interesting to note how the saddle height screws are shiny silver on top while the gold remains below the saddles. Almost all the gold has gone from the neck plate to reveal a copper base layer. But the tuners and pickguard screws are all shiny and there are still traces of gold on the truss-rod nut – a unique signifier of an original Mary Kaye.

There’s nothing to indicate that the frets and nut are unoriginal. However, it does look like the nut may have been removed at some point. The wiring and electrical parts are unchanged, and we’re pleased to see the original vibrato arm tucked away inside the pocket of the vintage tweed case. 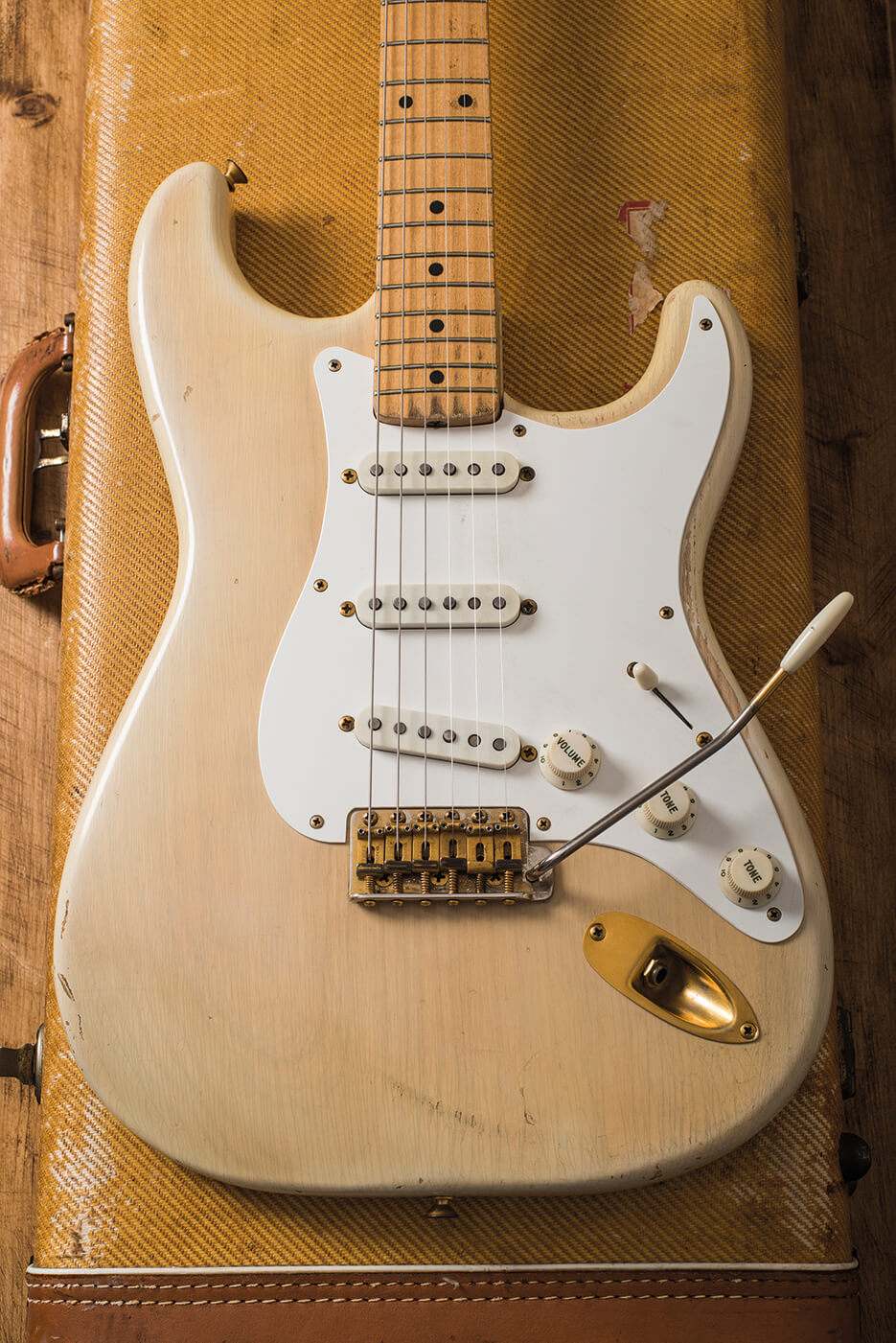 Sometimes collectors of vintage instruments favour originality to the detriment of playability. Although any issues here are minor to the point of inconsequentiality, the one tweak we are unable to make is to the pickup heights. They’re currently set too high, but they cannot be adjusted downwards without replacing the rubber spacers, which have perished to the point of solidity.

The seller understandably doesn’t wish to remove an original component, but if we were buying this guitar to play rather than keep behind glass, fitting a set of oversized springs with a diameter sufficient to clear the spacers might allow for height adjustment, while leaving the 1950s rubber in situ.

Although we can’t adjust the pickups to their optimal positions and hear the guitar at its absolute best, it’s apparent that this is an exceptionally good sounding Strat regardless, and we are knocked out by the way it plays. John Mayer insists that there’s no reason why a guitar with a 7.25-inch radius ’board cannot have a low action and slinky feel, and this guitar proves his point. Although the frets are low and skinny, we experience no difficulty in getting underneath the strings for precise bends and easy vibrato. We have an alder-bodied ’57 Strat on hand for comparison and the ash body delivers a lighter, springier and airier unplugged tone. It sustains just as well, while the midrange sounds a little less forward.

The pickup height emphasises the guitar’s inherent brightness, and set like this, their magnetic strength pulls the wound strings flat as you move up the neck. That said, we can hear more than enough to discern that this guitar has all the bite, woodiness and chime you could want for great mid-50s Strat tone. Mary might never have used one, but on this evidence, she was missing out.