The ES-225 was Gibson’s first thinline hollowbody, and yet it doesn’t get the same attention as its golden-era Kalamazoo siblings. But with original P-90s and a fabulous neck profile, it’s one of the few remaining 50s Gibsons that doesn’t cost rockstar money. 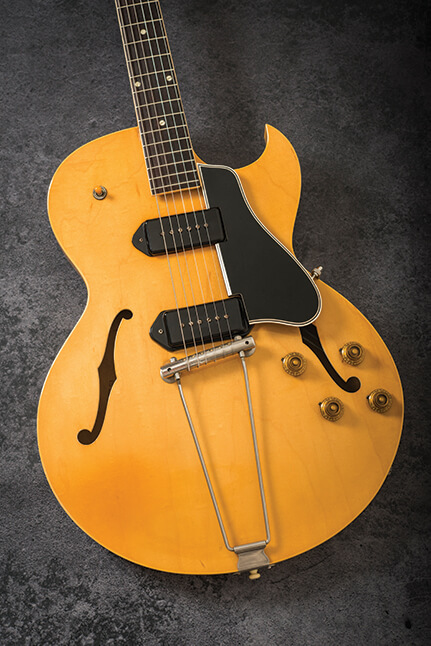 The ES-225 is one of relatively few 50s Gibson models that flies under the radar. Maybe it’s because it was a short-lived stopgap between the deeper bodied ES-175 and the later ES-330 and ES-125T models. It could also be that no big name players are closely associated with the model. 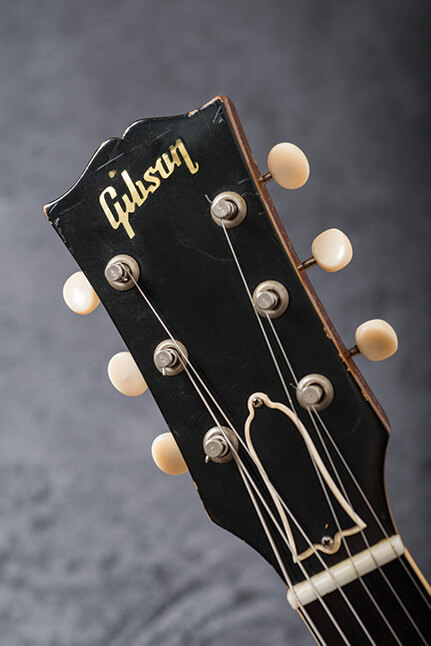 When introduced in 1955, the ES-225T was Gibson’s first thinline. Although it shares the same laminated body construction and outline as an ES-175, Gibson opted for a single P-90 pickup placed centrally and a longer version of the trapeze tailpiece used on the earliest Les Pauls. Two-pickup ES-225TD models were introduced the following year. The ES-225 was available in Sunburst and in this rather handsome Natural finish option. The latter guitars – known as the ES-225TN and ES-225TDN depending on pickup configuration – are rarer and more collectable.

The ES-225 was phased out in 1959 and models from that year feature Gibson’s smaller trapeze tailpiece in conjunction with a separate floating bridge. The single-pickup versions seem to have all-rosewood bridges while the two-pickup models have an ABR-1 mounted on a rosewood base – although ABR-1s do have a tendency to go missing. 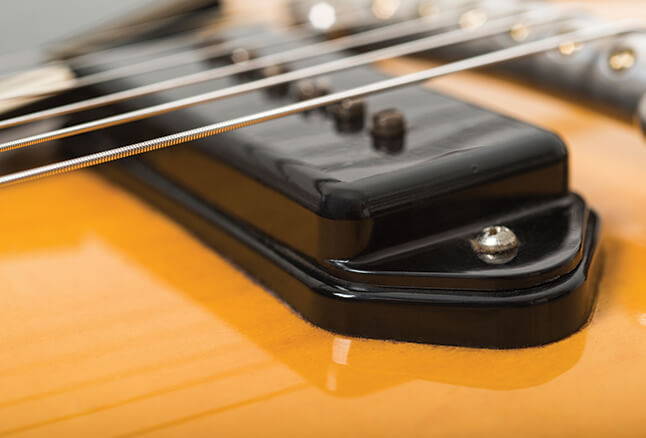 Thanks to a shim under the bridge unit, ES-225 pickups are better balanced than they tend to be on an ES-330

This 1957 example of an ES-225TDN must be about as good as it gets. The natural lacquer has aged to a luscious honey amber and besides a dent below the fifth-fret side dot, some strap rash around the nut area and some very minor scuffs at the end of the headstock, the finish is almost unmarked.

Our only gripe is a strap button that has been retrofitted to the heel, at the cost of two frets in upper access. Locating it there wasn’t the best decision – we would remove/relocate it in a heartbeat. On the plus side, an inspection mirror reveals original pots and a pair of bumblebee tone capacitors, and the original knobs and switch tip have remained intact. 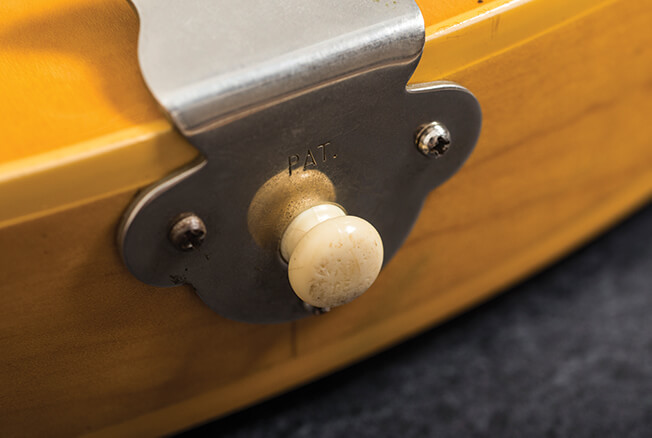 Prior to this guitar’s arrival, the trapeze tailpiece/bridge caused some concern – largely because of its infamously unsuccessful implementation on 1952 and ’53 Les Pauls. On ES-225s, however, it’s used as intended, with the strings wrapped over rather than under. It quickly becomes apparent why Les Paul specified this bridge for his signature guitar – it’s a substantial piece of hardware that is absolutely rock solid, feels smooth and comfortable and most importantly, sounds tremendous, with the full frequency resonance and sustain that we have come to associate with mid-50s wrapover tailpieces. 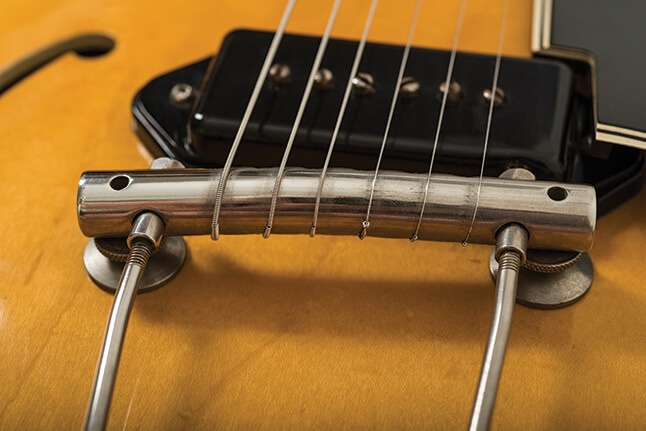 Intonation will never be as accurate as it might with a tune-o-matic-equipped 1959 ES-225, but collector Rob Sampson – a man who has owned examples of both – gives us some insights into the sonic differences. He explains, “The long trapeze does add to the sustain, but there’s not that much in it”. From a tonal perspective he notes, “There’s a more immediate bass response with the strings wrapped around the trapeze and more ‘snap’, like you get on a wrapover Goldtop. I don’t hear that much difference in fullness of sound though, as both configurations are loud and rounded tone-wise.” He also reveals that both the trapeze and ABR-1 configurations sustain far better than the models equipped with all-wood bridges.

It’s much the same plugged in, as the ES-330 combines clean chime with a more wiry and aggressive overdriven tone, but we often find ourselves struggling for sustain. In contrast, the ES-225 could almost fool you into thinking it’s a Goldtop. The ES-225 is also more even across the board and feedback is easier to control at high volume. 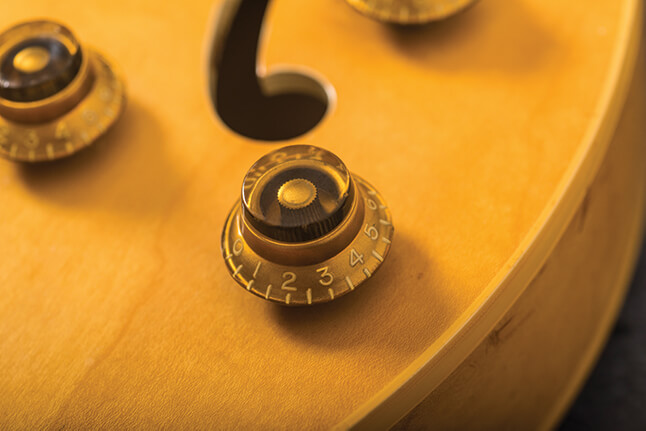 Turn it down, and the ES-225’s subtler side comes through. The rock beast becomes a woodier and more versatile guitar, with neck jazziness, a twangy countrified quack on the bridge and an in-between tone that could rival any Gretsch for fingerpicking and rockabilly duties.

With the shimmed bridge pickup, The ES-225’s pickups are far better balanced and its full tonal range is that bit easier to access. As for the pickups, it could be that the ES-225’s naturally full tone exaggerates the differences, but the 50s P-90s somehow sound clearer and more detailed despite being a little darker. They’re more dynamically responsive, too, which combined with the more balanced and even response, makes the ES-225 a more effortless and inspiring guitar to play.

Given that it’s an original 1950s Gibson in superb condition, we were hoping that this guitar might be something special… but in truth this ES-225 has completely exceeded even those lofty expectations. In fact, it’s something of a revelation because if you have ever dreamed of owning a 1950s Gibson, an ES-225 is surely the cheapest way to do so and yet, there are no apparent compromises. 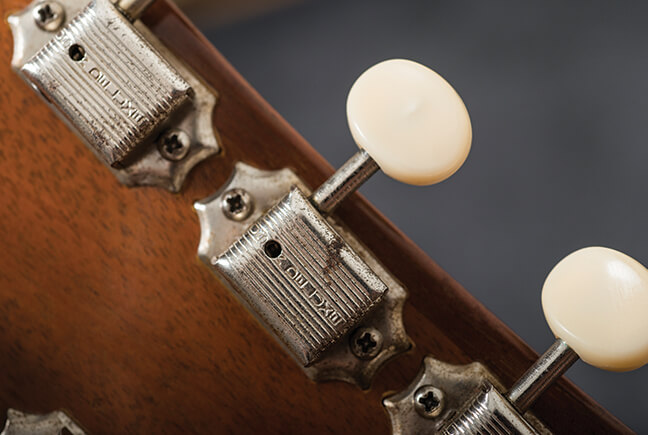 You get the same wiring harness and controls that were fitted to even the most collectable vintage Gibsons, along with a Brazilian rosewood fretboard, and a neck profile that is essentially indistinguishable from those found on the canonised 1956 and ’57 Les Pauls. The tuners and pickups are no different either, and given the choice between 50s or 60s P-90s, these earlier ones are our clear favourites – in every sense.

ES-225s must be among the few remaining ‘bargains’ that are left in the vintage guitar world. Granted, £5,000 is a lot of money, but if you can live with a sunburst finish, these guitars are often available for a lot less. In fact, not a whole lot more than a secondhand Gibson Memphis reissue.

Irrespective of whether you’re interested as a player, an investor or a bit of both, an ES-225 is a guitar you can enjoy using while watching its value increase. Meanwhile, some of us at the mag are already eyeing up our lesser-used guitars, pedals and amps and wondering how much they might fetch on Reverb. It really is that good.