Often overlooked, Guild’s early-60s semis offer some of the best vintage bargains in all of guitardom. Huw Price takes a look at a Guild T-100DP. 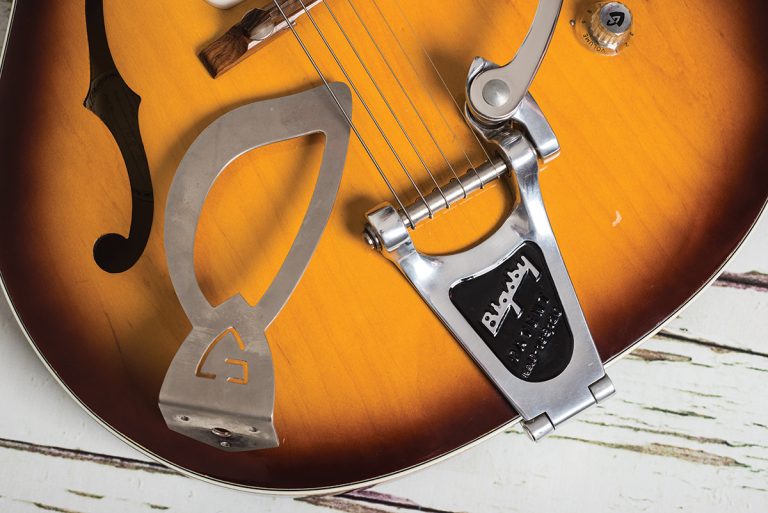 On the one hand, I’m absolutely astonished by the build quality of this 1962 Guild T-100DP because it’s easily on a par with similar Gibsons of the era, and way superior to pretty much any vintage Gretsch. On the other, I really shouldn’t be considering the heritage of the Guild Guitar Company.

Although Guild was started by retailer Alfred Dronge and former Epiphone executive George Mann in 1952, many of the company’s early employees had worked at Epiphone prior to its relocation to Philadelphia. Rooted firmly in the New York archtop tradition, it was said at the time that those five employees brought more than 200 years of combined guitar-building experience to Guild. Not bad for a startup. 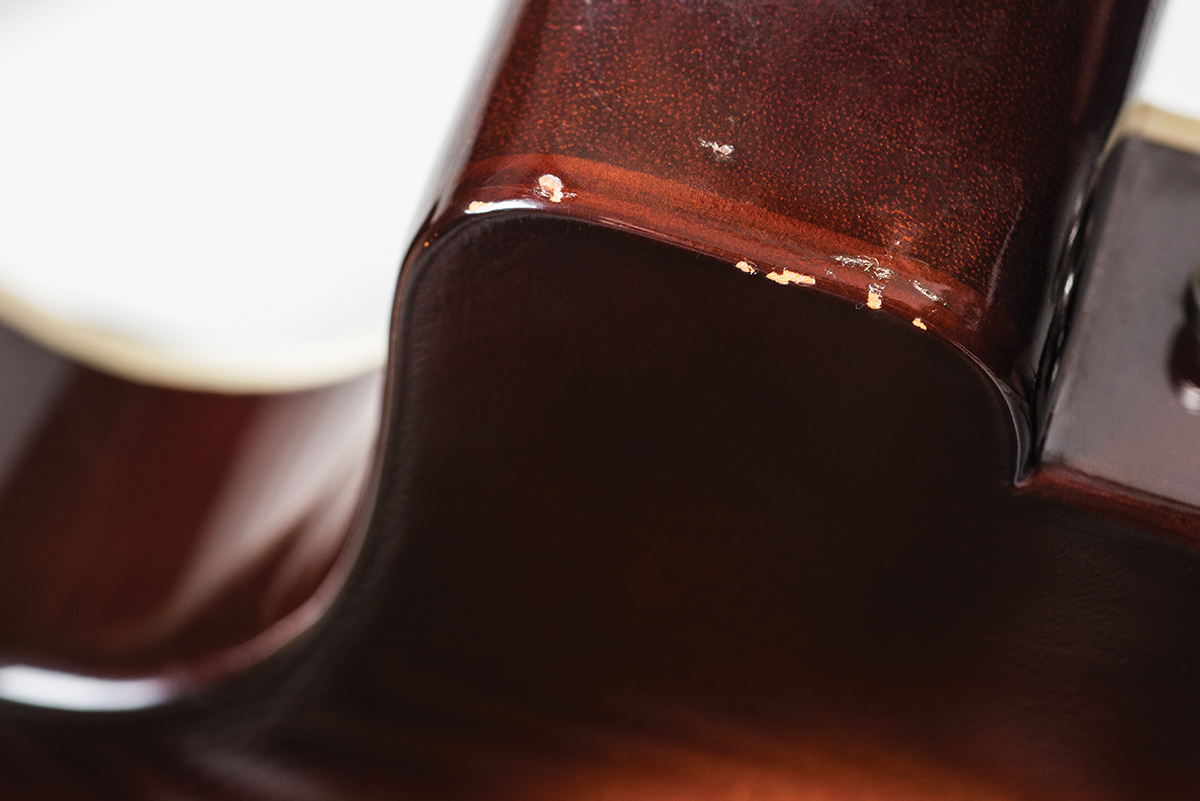 The plywood back extends across the neck heel to form an integrated heel cap. This well established technique is more commonly associated with classical builders

However, rather than anchoring itself to a fast-fading jazz scene, Guild set about making innovative flat top acoustics, electric basses and laminated thinlines, as well as hand-carved jazz guitars. This month’s offering is a 1962 Guild T-100DP Slim Jim, and it’s in pretty remarkable condition.

It features a two-inch deep three-ply maple body with a set mahogany neck and a bound 20-fret fingerboard that appears to be Brazilian rosewood. The controls may be conventional, but the layout isn’t because the two volume controls are situated above the tone controls. The carved rosewood bridge and pickguard both appear to be original and are in fine shape. However, the Bigsby is a later addition and it seems to be of recent manufacture. 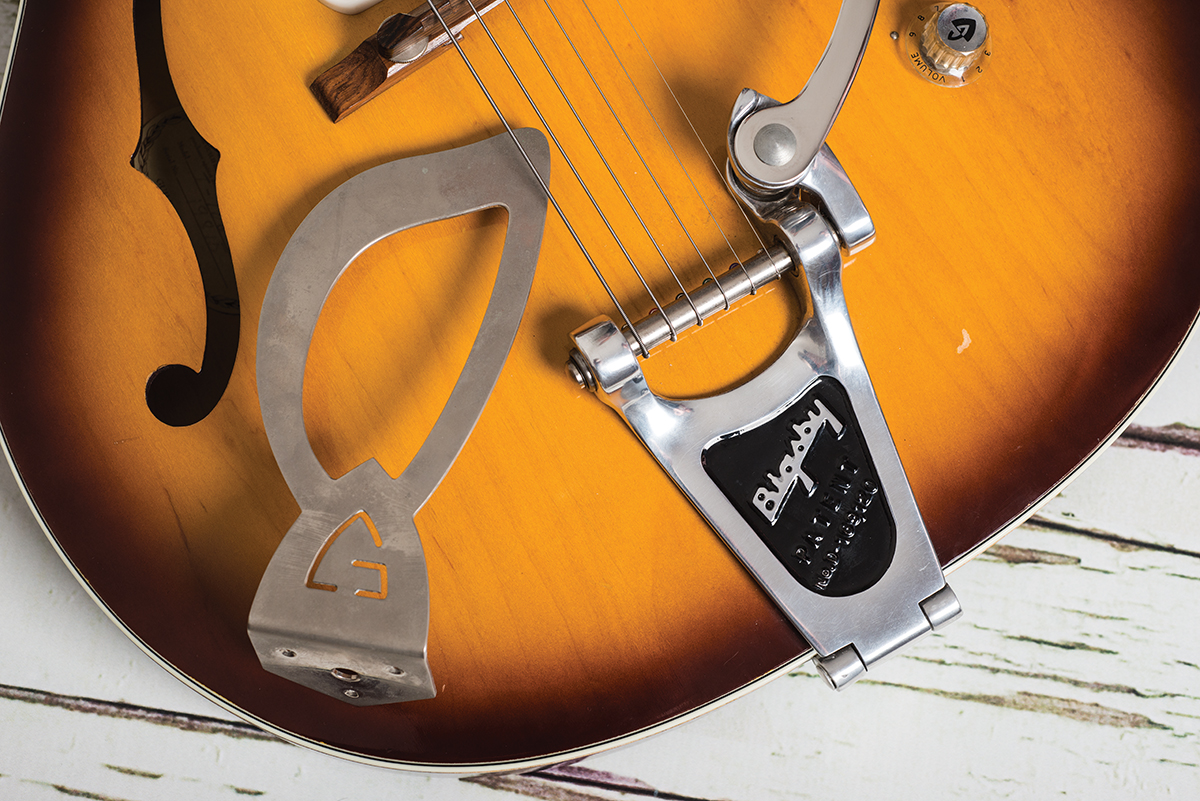 If you don’t want the Bigsby, the original tailpiece is in the case

Fortunately, the original Guild tailpiece is tucked away safely inside the original Guild-branded case, along with a period leather strap. The only other non-original parts are the locking strap buttons. Some earlier Slim Jims have the same type of Waverly open gears used by Gretsch during that era. Later examples have the modern-style Waverly ‘Butterbeans’, and since no extraneous screw holes or tell-tale ‘footprints’ can be seen, I think these tuners are either original or the original type. Either way, they work superbly, but if they’re modern replacements that’s considerable added value. 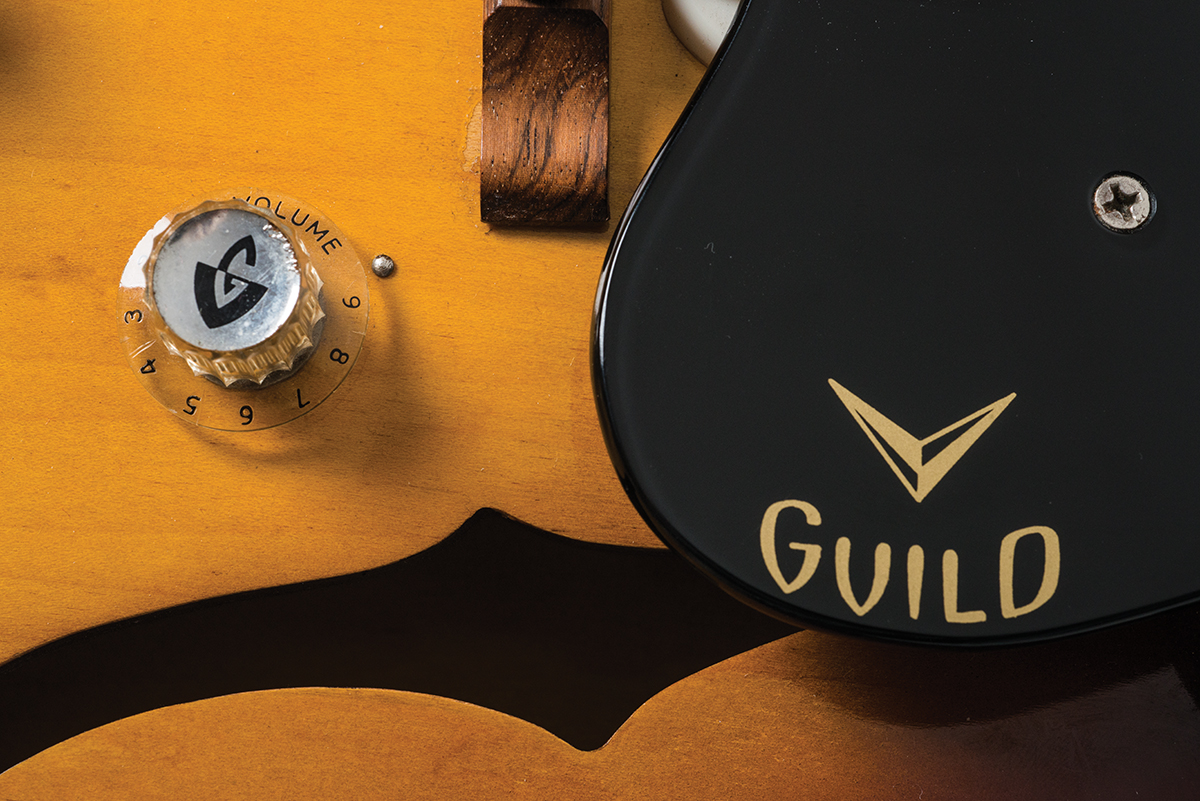 The bespoke knobs and metal marker pins are classy features

People often describe the pickups Guild used during this era as ‘P-90 types’, but they were made by a company called Franz in New York. Structurally, there are similarities because these have two magnets beneath a single coil resting on a metal base plate with bent edges and 5/40 fillister head screws. The neck and bridge pickups have different screw spacings to align better with the strings, and DC resistance readings vary from around 4.5k ohms to over 8k. 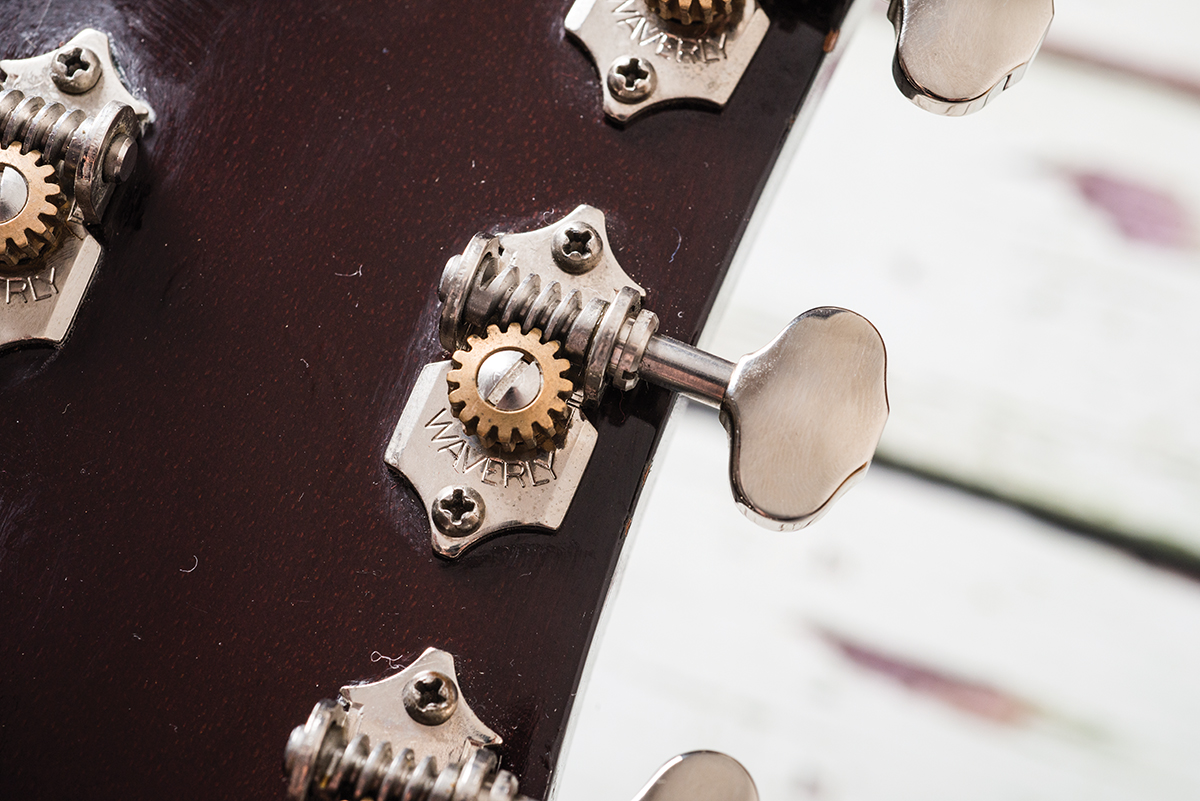 If these Waverly tuners are new, they cost someone a small fortune, but they’re top quality and no extra holes have been made

The low-wind ones were used on the jazz models, and this Slim Jim’s read 4.88k and 4.92k. Later Slim Jims have smaller rectangular pickups built by Guild with bought-in coils, but the Franz pickups are generally considered the ones to have. They also appeared on the guitars of other manufacturers, including D’Angelico, so Guild wasn’t going for a cheap option. 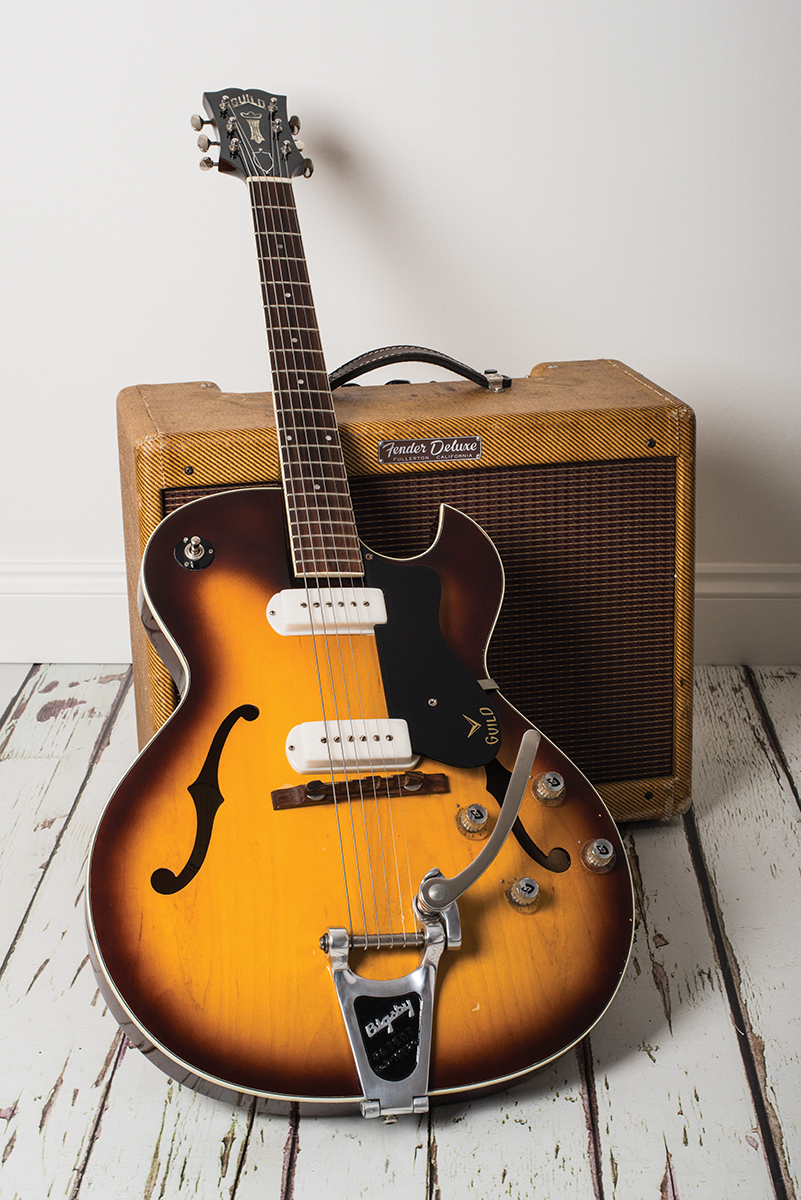 There are certain subtle construction details that demonstrate Guild’s high standards. For instance, the corners on the Guild T-100DP are rolled over so smoothly where the back meets the sides, and the lacquer is so dark, that you cannot see the join. It looks almost as if the back and sides are carved from a single piece of wood.

Then there’s the way the back extends over the heel to act as an integrated heel cap. It’s a traditional classical guitar building technique that maybe adds some degree of stability because this neck hasn’t moved a jot in 55 years. 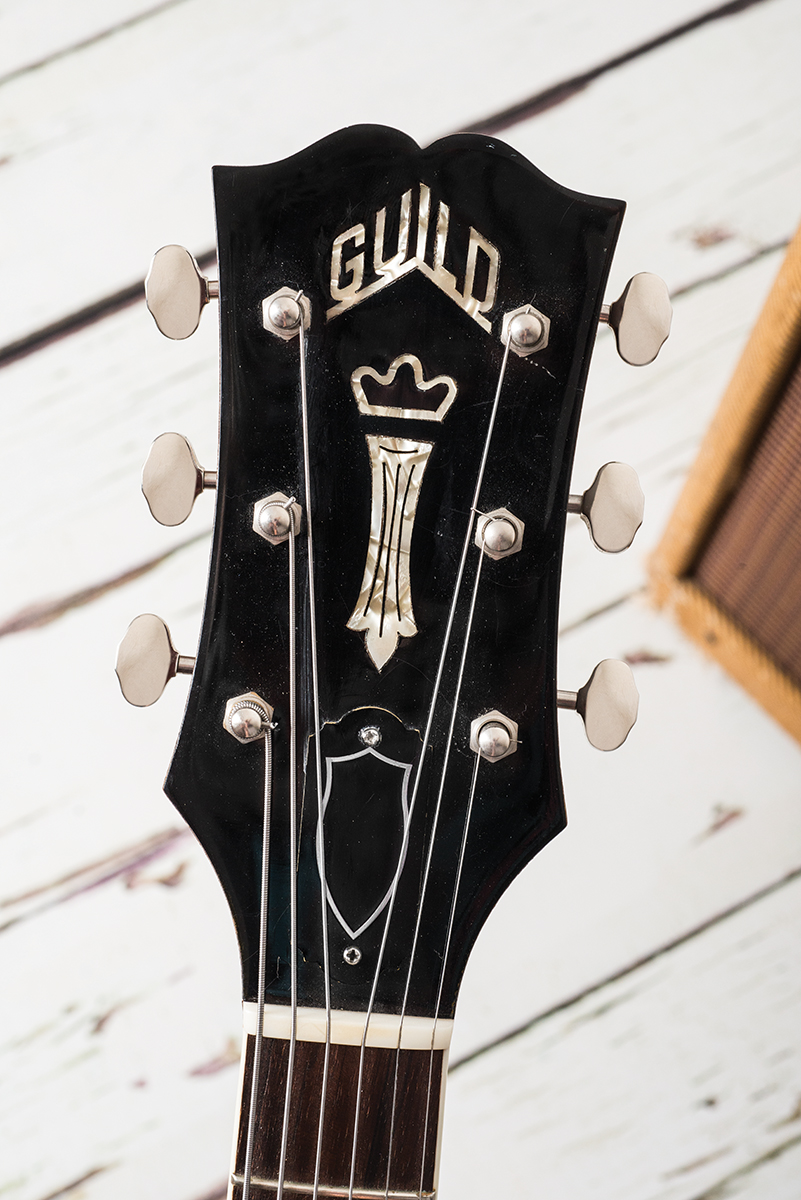 The headstock has a plastic overlay with pearloid logos. In real life, it looks better than it sounds, but it has started peeling off

I’m not certain what brand of switch Guild used, but this one has such a firm and positive feel it doesn’t seem like the usual period Switchcraft. Or maybe this is just what they felt like when new. Guild also used three screws to keep the ‘poker chip’ switch surround from spinning. The Guild-branded control knobs were obviously bespoke, and tiny metal position reference dots are set into the body just outside the edge of the skirt. 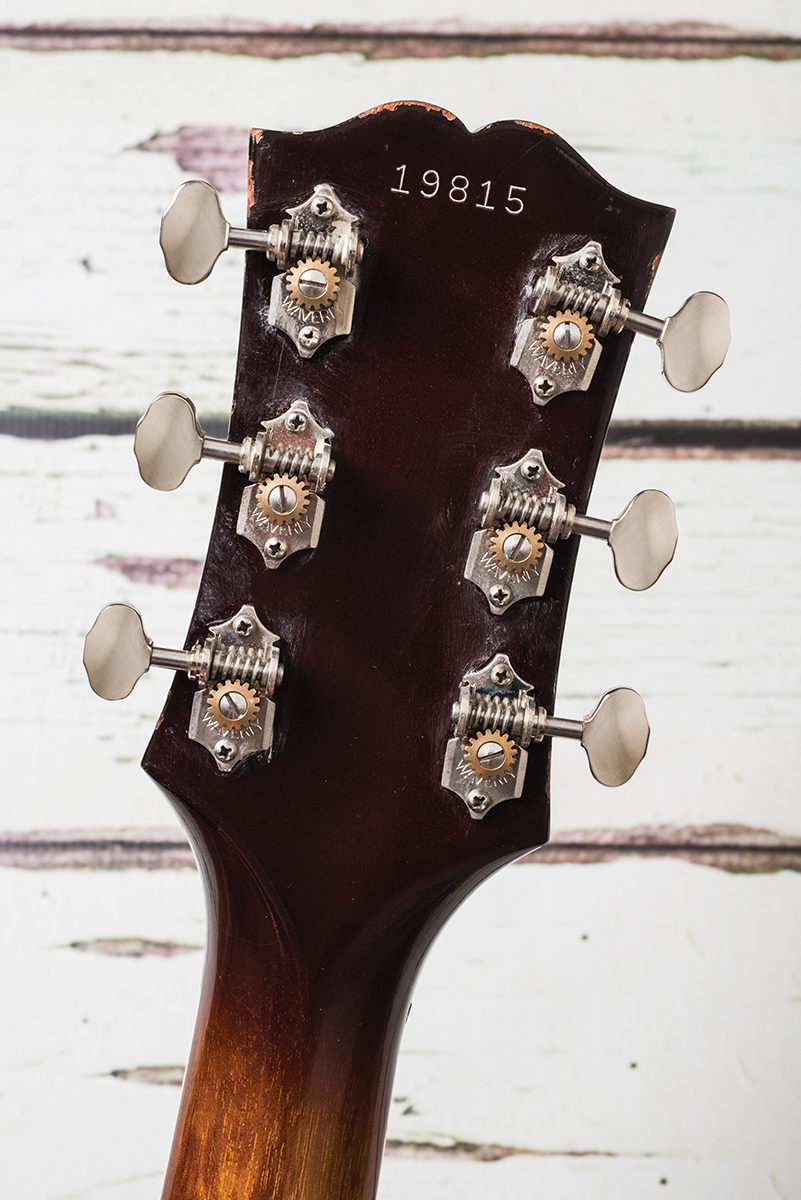 The headstock overlay is peeling off slightly, but it would be well within the scope of any enthusiastic amateur to fix it back down. There are a few chips and dents around the back edges, a bit of rub through under the bridge and some colour fading on the back of the neck, but all things considered, this Slim Jim looks about 40 years younger than it actually is.

Although the bridge is adjusted down as far as it can go, the action still feels a little high. I’m certain there’s nothing wrong with the neck angle or joint, so the solution would be to remove material from the bridge base. There’s lots of it, so that wouldn’t be an issue, but the pickups sit high, and there may be some risk of the strings contacting the covers.
Acoustically, the Guild T-100DP Slim Jim is loud and bright with a naturally snappy twang and lots of sustain, but it doesn’t go that deep in the bass. Even so, it’s fun to play unplugged with its surprisingly modern-feeling medium C neck profile, and the tuning is commendably stable. 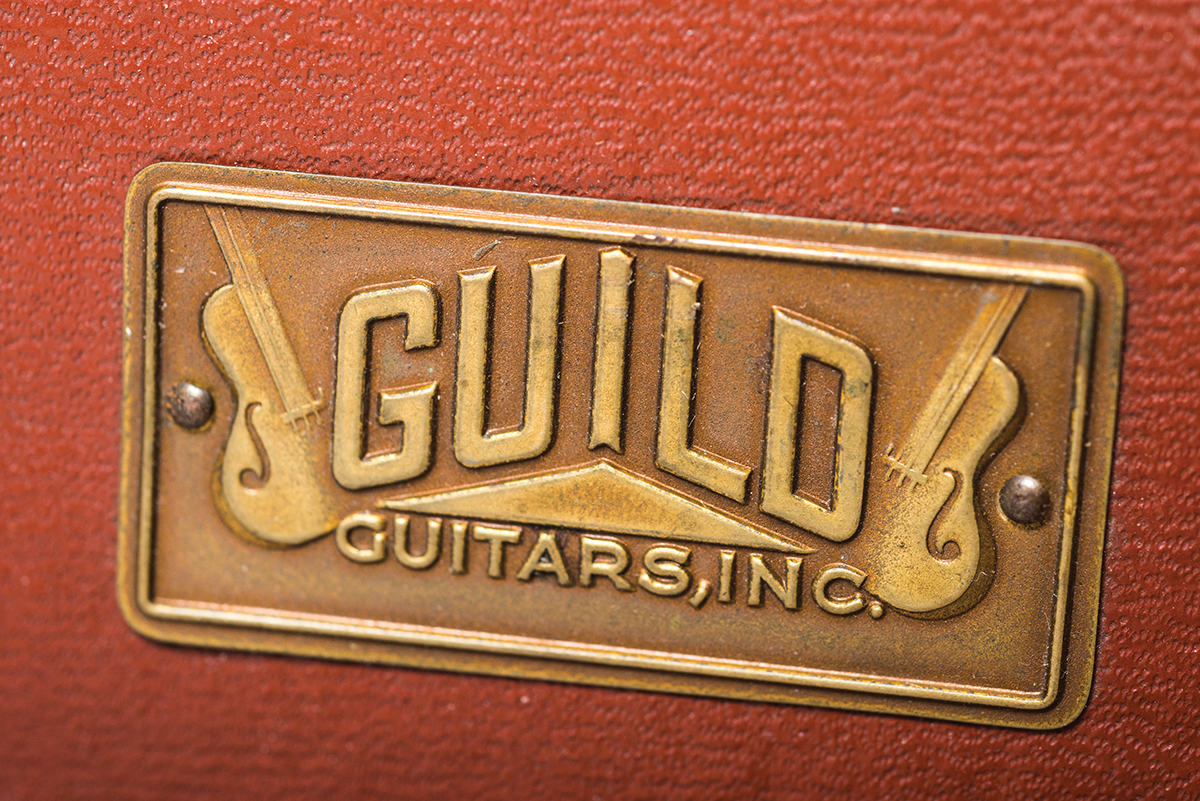 Although the Franz pickups have some P-90 attributes, their tone is cleaner, clearer and quicker to respond. The downside is less warm woodiness and a low-end response that could be described as either lean or well defined. My favourite aspect is the way they combine a pretty and almost delicate treble response with a subtle underlying growl.

In perhaps over-simplified terms, the Guild T-100DP Slim Jim sounds somewhere between a thinline Gibson with P-90s and a Gretsch. It is maybe smoother and more refined than a Gretsch but zingier and ringier than a Gibson, albeit with lower output level. 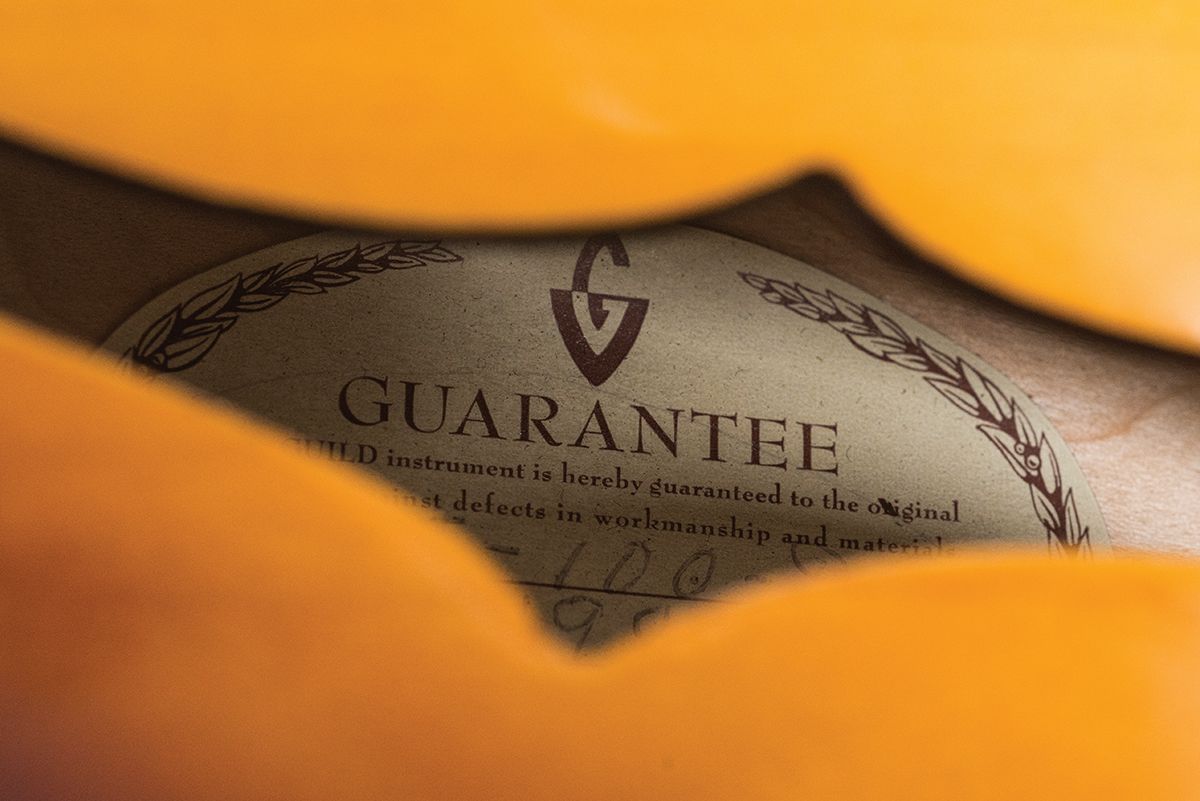 It’s a guitar built more for rock ’n’ roll than jazz. Although you can dial down the treble quite easily, it’s hard to compensate for the lack of fullness with equalisation alone. It’s also so lively played clean that you might feel the need for some compression. That said, overdriven amps are naturally more compressed and the Franz pickups work superbly with slight overdrive and full-on distortion alike, as clarity is never lost. 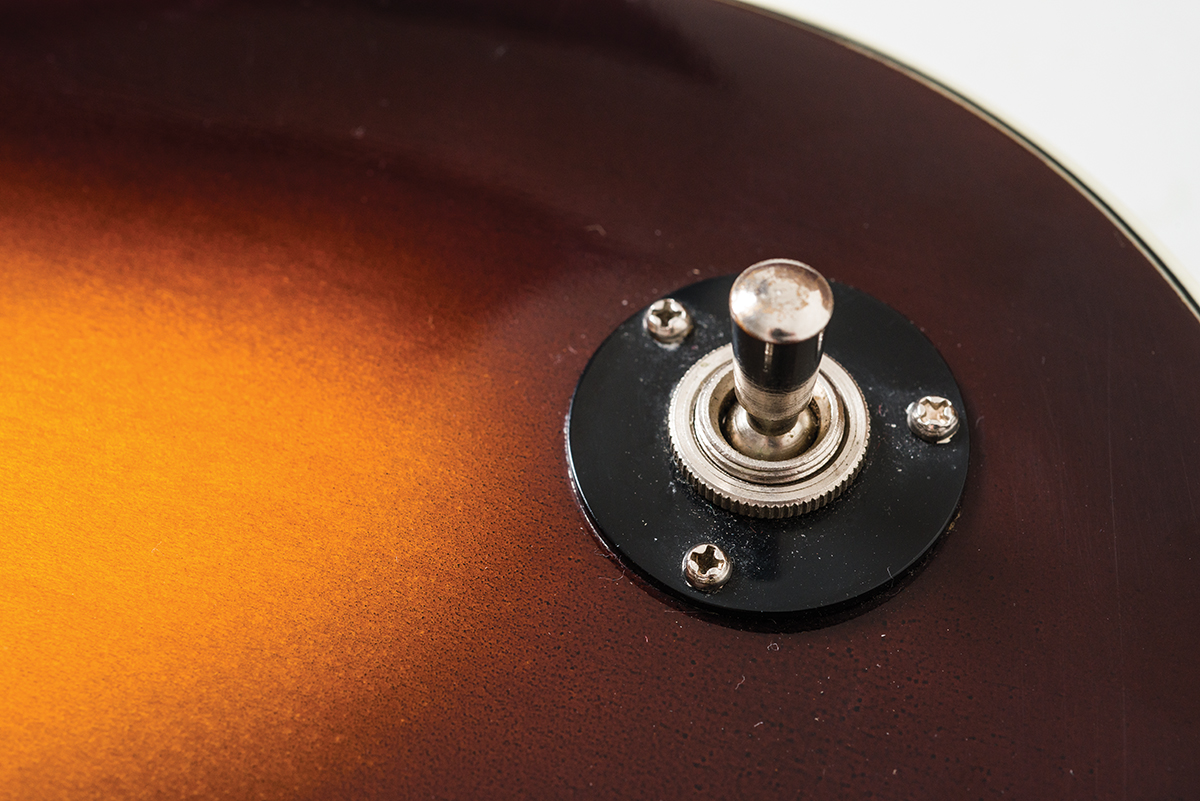 In fact, I’d bet most vintage Slim Jims have spent more time bashing out Louis Louis in suburban garages than My Funny Valentine in local pizza joints. So, 60s rhythm, bluesy soloing and even proto punk are all on the menu. I particularly enjoyed sending the Slim Jim’s pingy exuberance through copious amounts of reverb for psychedelic soundtrack fun, as well as rockabilly tunes with a little slapjack. 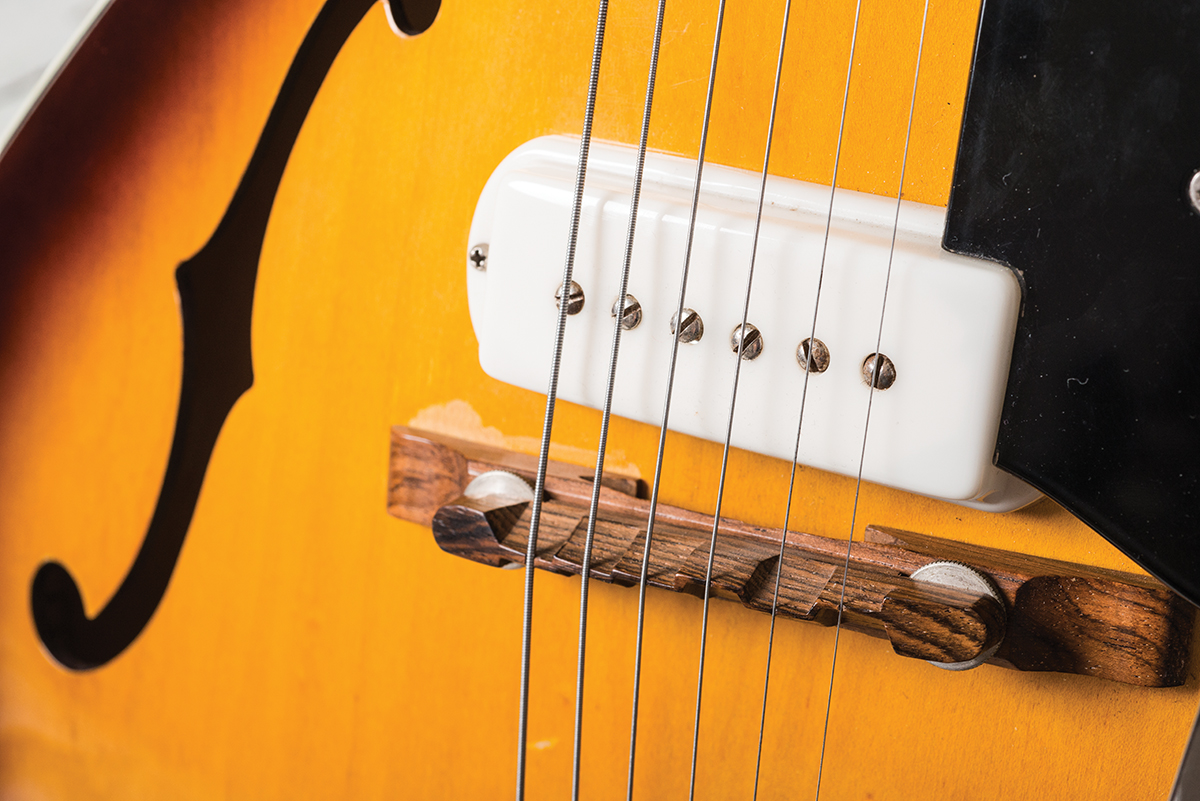 Although they look similar to P-90s, these are Franz pickups made in Queens, New York City, and they’re highly regarded

Although it feels slightly stiff with a set of 11s, this is a superbly built instrument that’s just a decent setup away from a new lease of life. Where else could you find a 55-year-old American thoroughbred in this condition for less than £1,500?