An original custom colour Sea Foam Green Strat is many a Fender collector’s holy grail. We find there’s more to this guitar than just a rare finish… 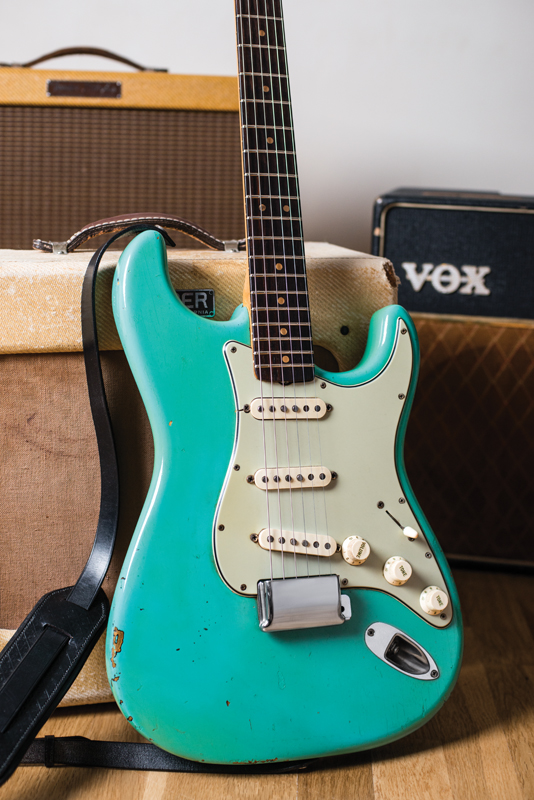 It’s always a thrill to play any pre-CBS Stratocaster, but largely intact examples with an original finish present an even bigger treat. The fact that our subject for this bench test left the factory complete with a custom colour Foam Green paint job means we really are dealing with something very special.

Granted, custom colour Strats don’t sound any better, but they do tend to command a premium with collectors and investors. Rarity counts, and Sea Foam (also referred to simply as Foam) Green is about as rare as it gets.

Try doing an image search for a vintage Strat with this finish, and all you’ll turn up are some relics and a handful of re-fins. There are rumours that Rick Nielsen of Cheap Trick once owned an example, and Kirk Hammett appeared with one in the video for I Disappear, but… that’s about it. 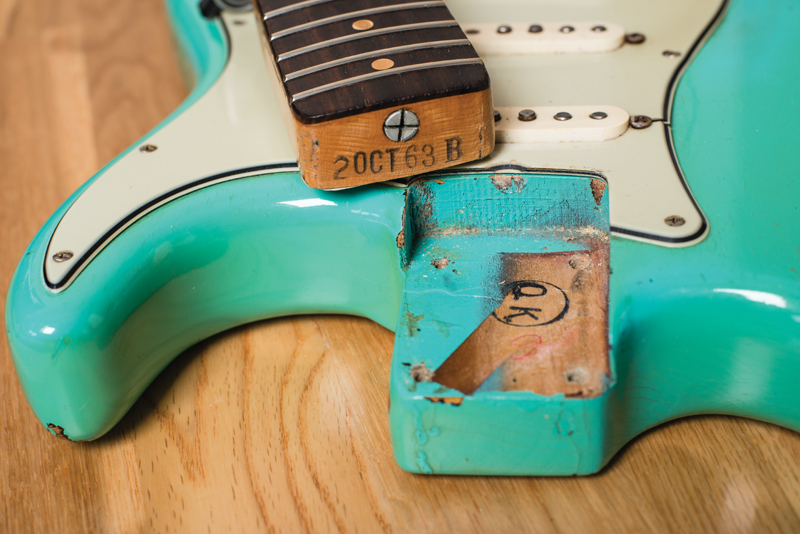 This vintage lovely has a neck date of October 1963, along with a very early ‘L’ series serial number. The body has the later-style pickguard screw hole – shifted closer to the middle pickup – but the grounding is done in the earlier style, with the spring claw soldered directly to the output jack.

The wires are fairly short, so it’s tricky to flip the pickguard over. Perhaps the famously frugal Leo Fender was cutting back on cable costs. As befits an unmolested vintage Fender, the cloth cable looks fresh and clean.

The originality of the finish is the crucial issue. I can report that the body is not branded or stamped to indicate that it’s a factory refinish. A paint stick was used for spraying, and somebody applied masking tape diagonally in the neck pocket to ensure the factory ‘OK’ stamp wasn’t painted over. Another strip of masking tape was placed in the middle pickup rout, but there are no body markings in that area. 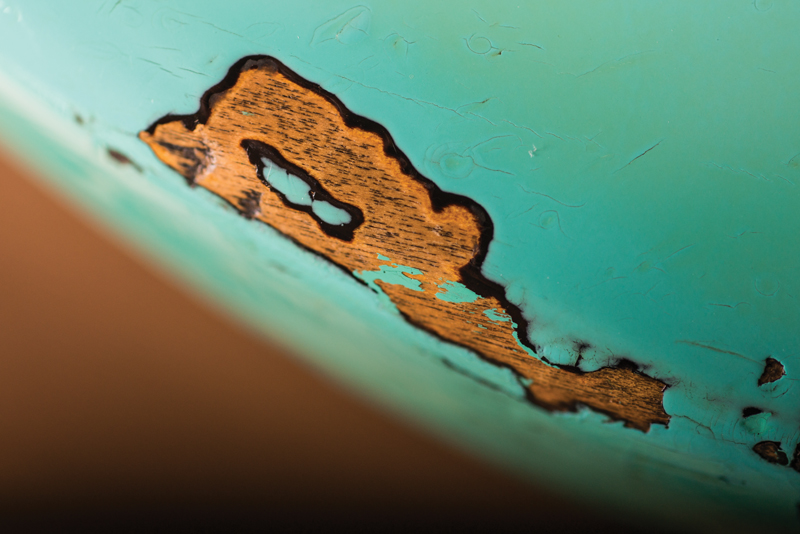 There’s an earlier finish under the Foam Green, and it can only be sunburst. Some areas of green around the sides have rubbed away to reveal black lacquer. You can also see the layers all the way down to the wood where the finish is chipped, and it’s telling that the black can be seen only towards the edges of the body.

Chips nearer the centre reveal clear coats with a yellow tint and traces of a reddish lacquer can be seen around the screw holes under the neck plate and inside the jack cavity. This does seem consistent with a three-tone sunburst.

There is no doubt that the Foam Green was professionally applied and it once looked pristine. Had it been applied over a worn and damaged sunburst, there is no way it would look as good as it does, and if the body had been sanded it’s unlikely so much of the yellow would have survived. The lacquer retains much of its glossiness, but has acquired an attractive and natural patina consistent with playwear. 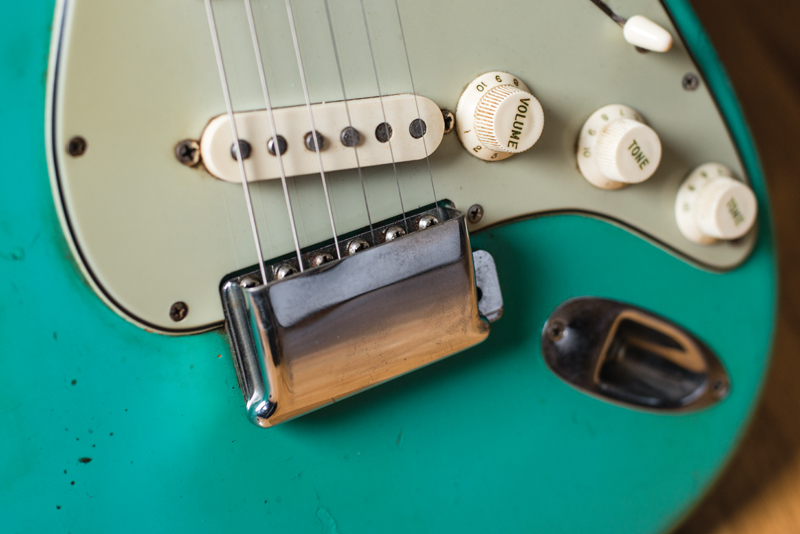 Amateur attempts to touch up the finish have been made in places and the repair paint is a decent colour match, but it was applied by brush rather than drop filled. Under a black light, everything on this guitar looks right – except for the touch-ups.

It’s well documented that Fender would spray over imperfect sunburst bodies to fulfil custom colour orders, in effect making the sunburst a base coat. Close examination and gut instinct lead me to conclude that this Strat was Foam Green when it left the Fender factory.

Apparently, this one spent most of its life in New Zealand, and it has a very original feel. Even the ‘ashtray’ bridge cover and tremolo arm are still with the guitar. All the original plastics are present too, and the pickguard is in pretty good nick, but it’s split in the usual place north of the neck pickup screw. There has been a fair amount of shrinkage, which has pulled the pickups out of shape somewhat.

Looking underneath, the shield plate has been crudely reshaped at the end of the treble horn. This could be the the work of the previous owner, who may have been concerned that the plate was beginning to show due to guard shrinkage. The guard shows little evidence of truss-rod adjustments, and the scoop is rounded and smooth. 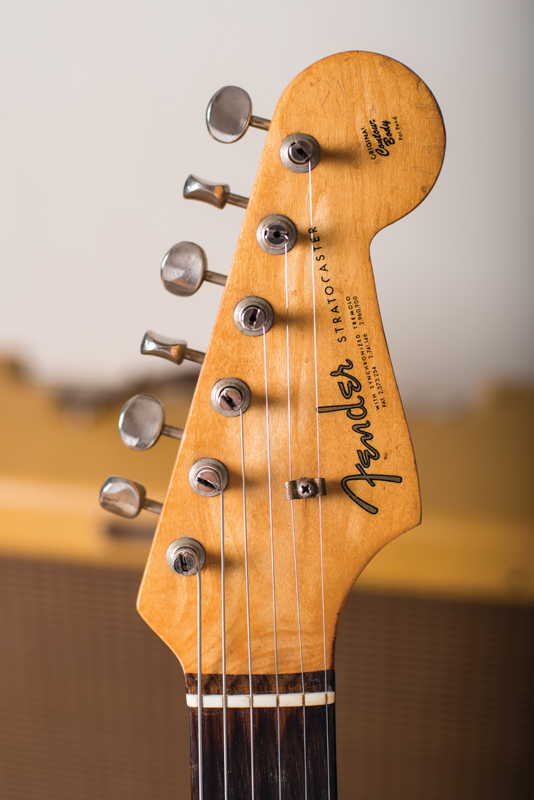 The frets had to be replaced because the wear was so bad. The current owner chose jumbos, which are not original spec, but hey, if you’re pulling out factory frets you may as well replace them with ones you like. Fortunately, the beautiful veneer board, with its lighter than usual Brazilian rosewood, retains most of its depth. The thickness of the veneer would originally have been about 3/32”.

Those who have played original early-60s Strats, or many of the reissues and replicas, may have a fairly clear idea of a typical neck profile for this era. Most likely, it would be something skinny around the first few frets, which thickens out to a palm filling roundness near the 12th fret. This neck feels nothing like that.

The fairly chunky neck has a full roundness all along, so the increase in depth is less noticeable as you move up towards the body. Acoustically, it’s a fairly lively example, but there’s nothing to hint at what happens when you plug it in.

This is one of the most naturally powerful vintage Strats I’ve ever played. The frequency range is extreme, with massive bass weight and sparkling yet smooth highs. It will push most valve amps into overdrive quite quickly, but here’s the thing – none of the pickups is wound hotter than 5.8k. 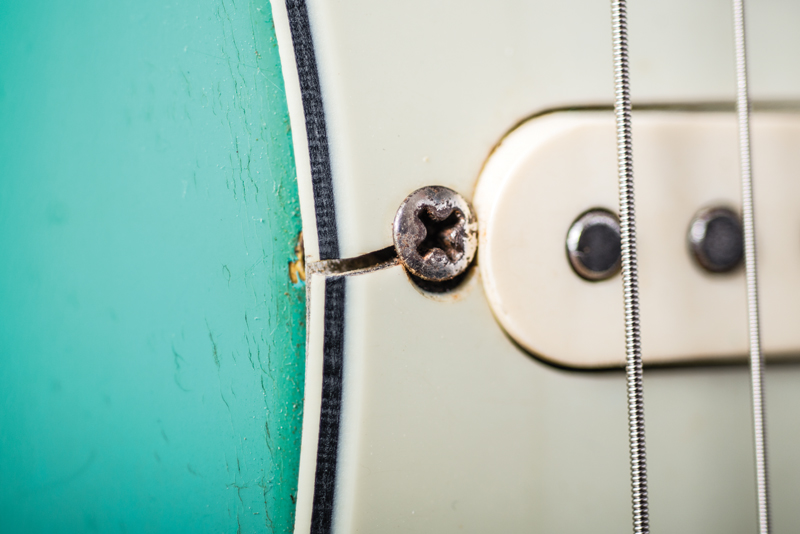 The bridge pickup is about as good as they get. It more than holds its own with the others, producing a spanky midrange with ample low-end weight. There’s also a spectacular jangle on top that never veers towards excessive brightness.

The middle position is where it’s at for rhythm duties, sounding well balanced with a throaty quack. The neck tone is absolutely huge, but as with both of the other pickups there’s always inherent clarity, definition and punch regardless of overdrive levels.

Some 60s rosewood board Strats are associated with ‘glassiness’, but this one doesn’t go there. This Strat is not only a collector’s dream, it’s also a muscular tone monster that does the big, clear, sustaining SRV thing to a tee.