If a played to death pre-CBS Strat is your fantasy guitar, this example from 1964 may be much as you have imagined it. 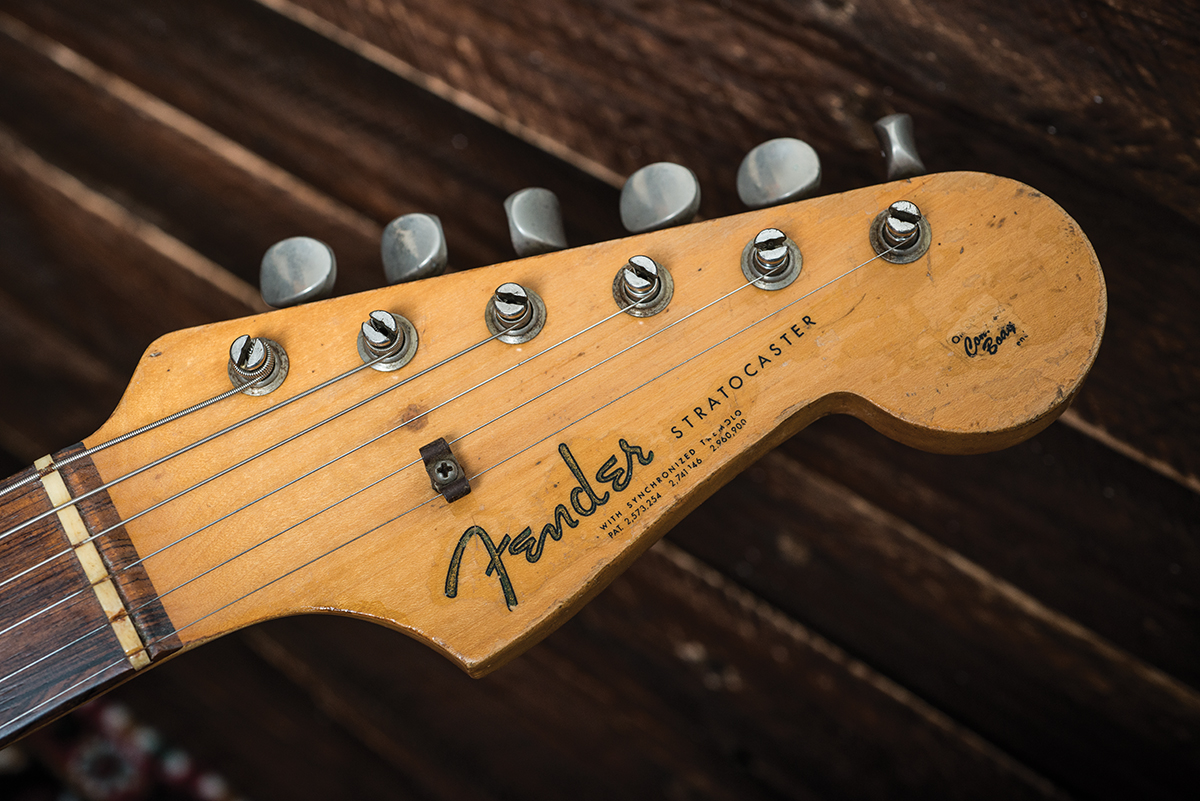 By 1964, the Stratocaster was already a decade old and the design had undergone some significant changes since its inception shortly before the dawn of rock ’n’ roll. This sunburst example was clearly played long and hard, yet somebody loved and respected the thing. 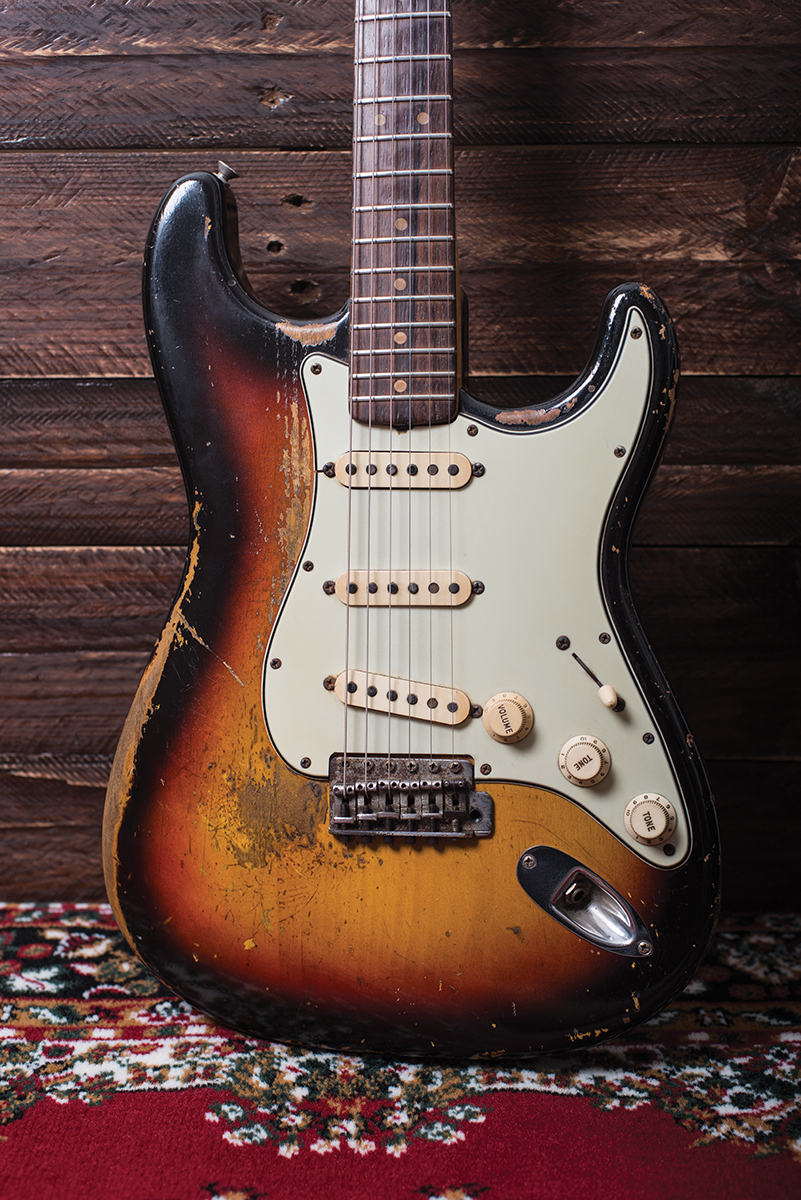 The neck is probably the fattest I’ve ever encountered on a rosewood-board Strat. The width is pretty standard, but it bears little resemblance to the usual ‘skinny at the bottom, fatter up top’ profile seen commonly on early-60s examples or the more modern-feeling C typical of the mid-60s. On this guitar, the neck starts out substantial and ends up as a full and deep C just before the body joint. In fact, it’s borderline clubby. 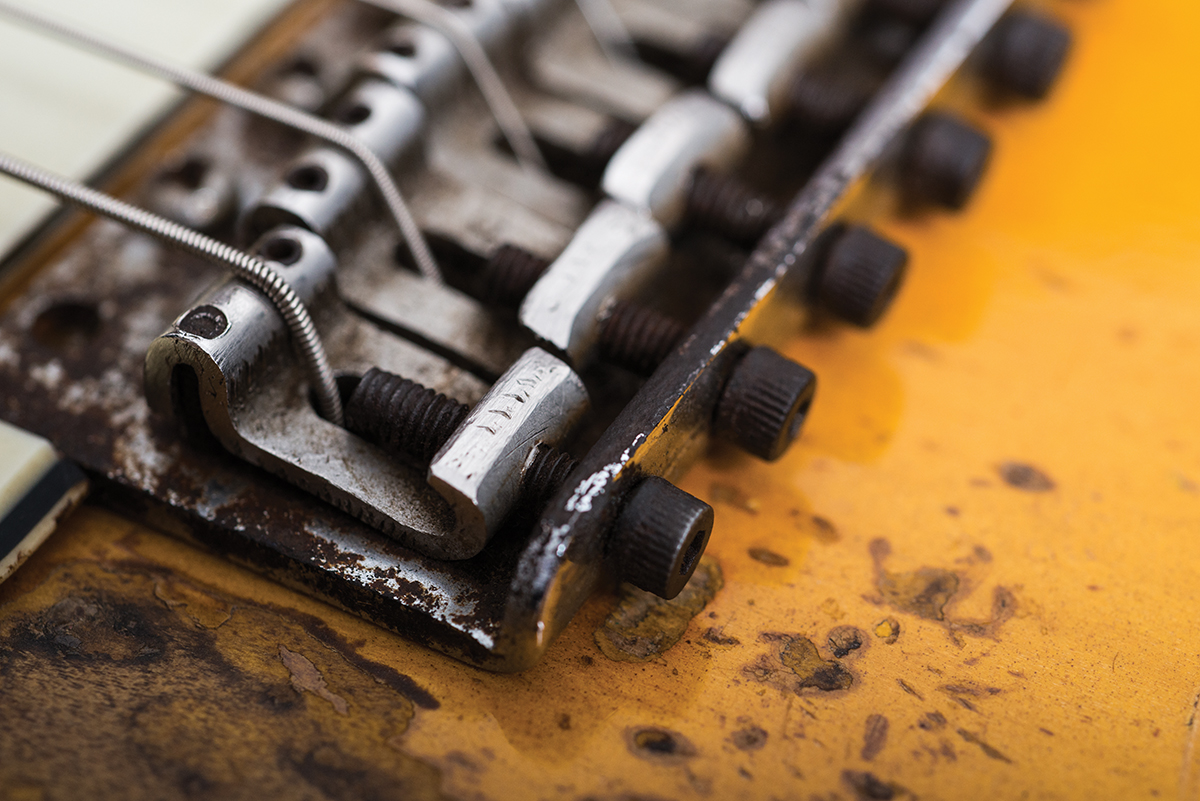 Handmade saddles have replaced five of the originals

Despite its worn appearance, this guitar is extremely clean and has never been subjected to tuner swaps or other dubious modifications. An extra string tree was added but subsequently removed, and the only non-factory parts are five of the saddles. The highly corroded condition of the one remaining original suggests this was a repair born of necessity. 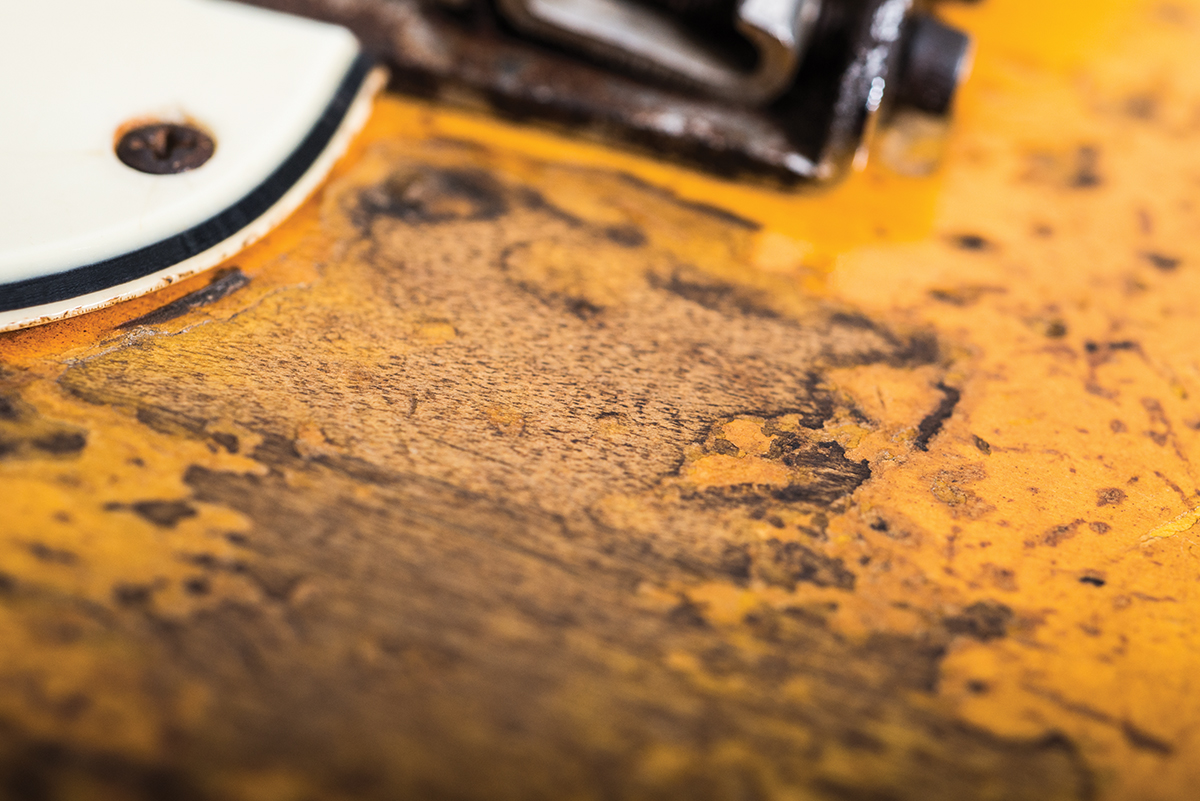 Where the finish has worn away, the bare wood has oxidised to create a dull, grey look

One of the bridge plate screws is missing, but the rest of the vibrato assembly looks bone stock. As is typical with vintage Strats that haven’t been played in anger for some time, the controls and switch have stiffened up.

Everything works, but you don’t need to worry about knocking the selector switch out of position, because it needs some persuasion to shift it. Someone decided to have the playing area at the back of the neck blown over; the job was done professionally, but it’s the only thing that detracts from the look and feel of this superb example of a vintage Strat. 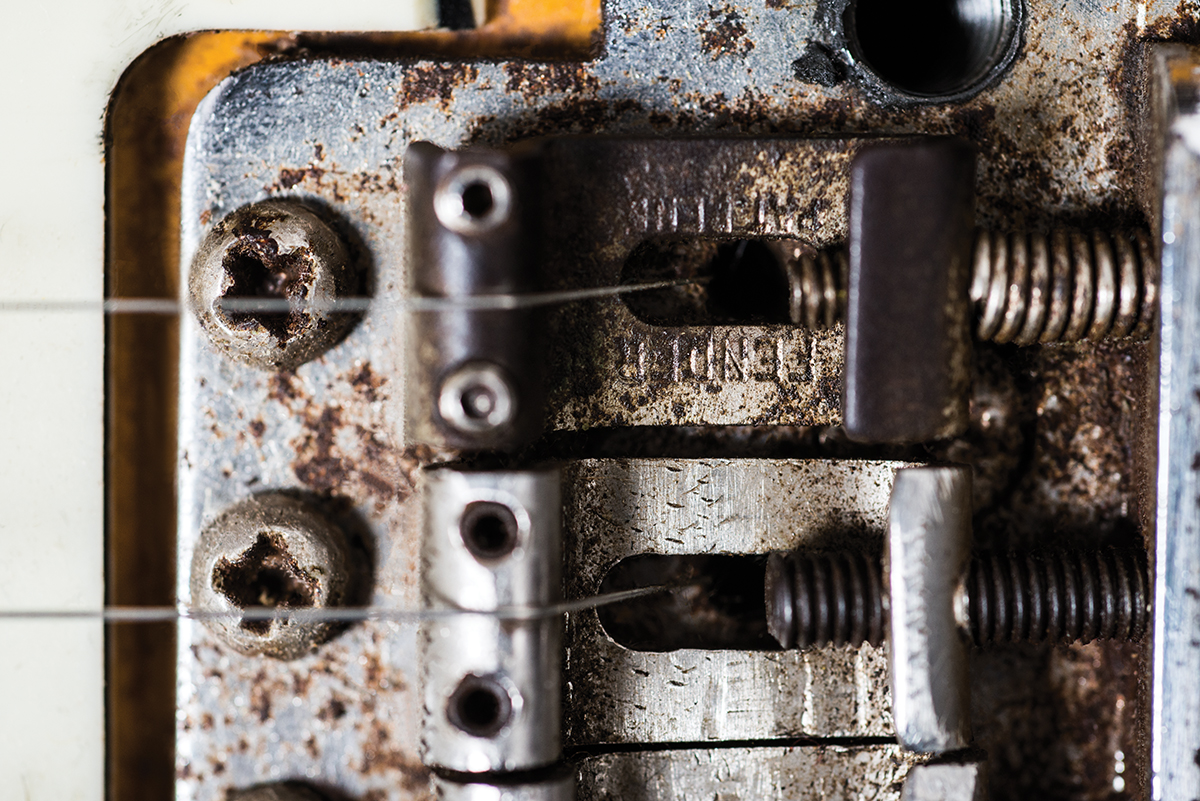 Judging by the condition of the one remaining saddle, it’s unsurprising that the others needed replacing

Besides a small area where the rear of the headstock transitions to the neck, everything black lights as one would hope – including the back of the neck. It seems the fresh lacquer was blown over what remained of the original finish. If this were my guitar, I’d have no hesitation in gently rubbing off the overspray using micromesh to restore the appearance and enhance the vintage feel. 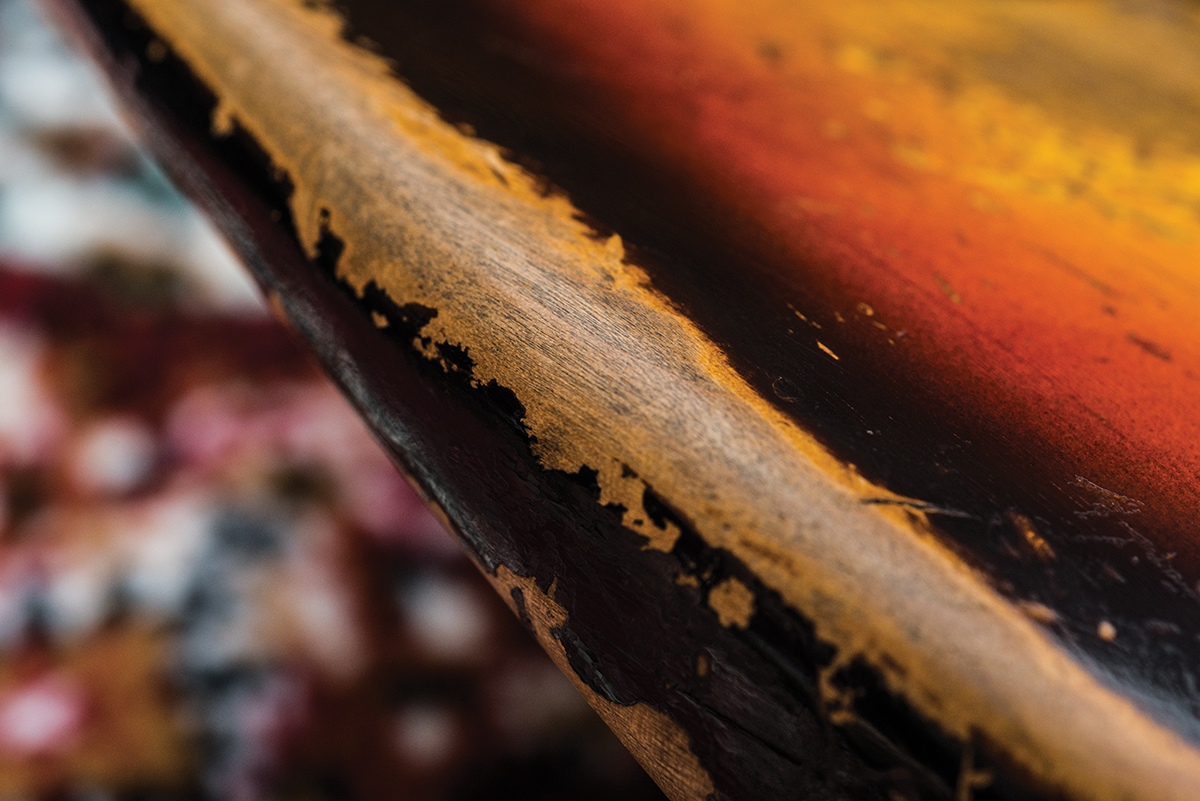 If this guitar was in ‘good’ condition cosmetically, I probably wouldn’t like it half as much as I do. The centre section of the sunburst finish would have been translucent yellow when new, but the clear lacquer top coats have aged to a rich orangey amber. The red band remains well defined without looking too much like a boiled sweet and the edges are a deep dark brown rather than black. On the back, where much of the original finish has worn away to bare wood, the yellow stain can still be seen and the yellow lacquer is more vibrant. 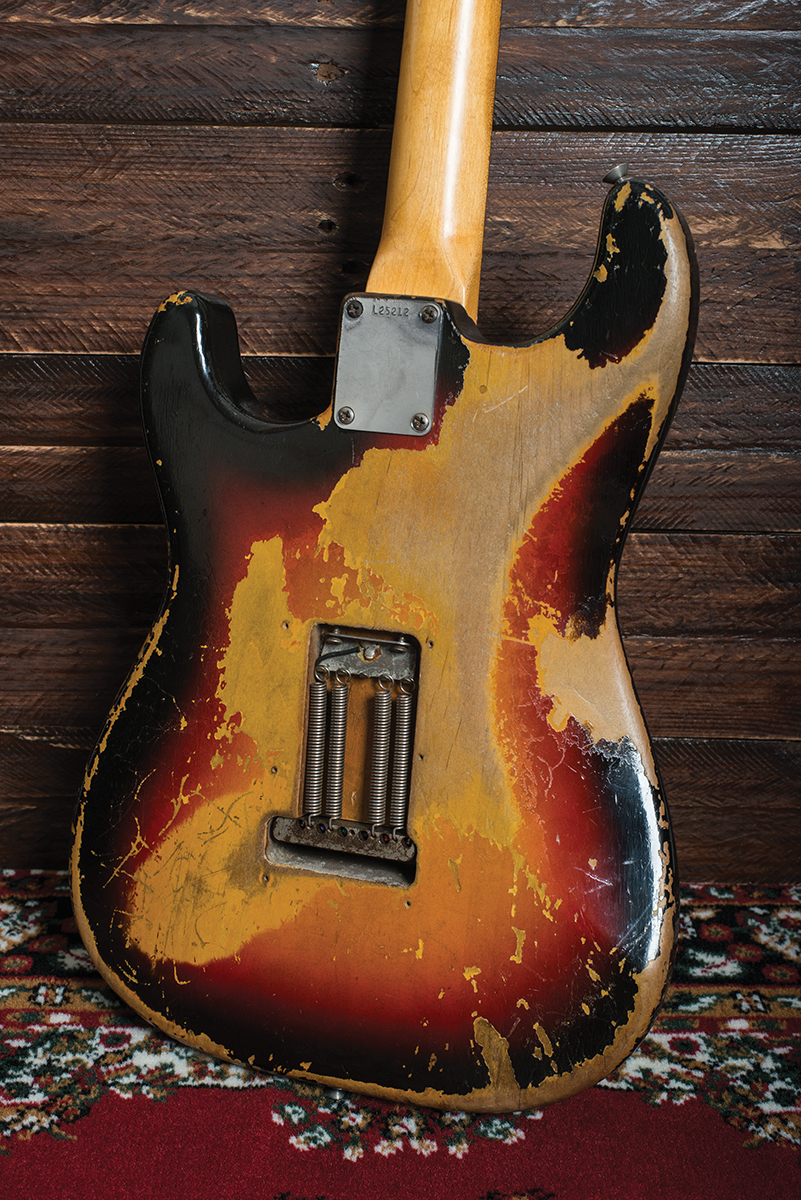 A severe case of buckle rash has removed much of the finish, but the yellow wood stain can still be seen

There is lacquer checking all over the body, but it has formed in tight lines that pretty much follow the grain, and the checking is by no means obvious unless you catch the right angle relative to a light source. The plastic parts are all original, and besides the oft-seen crack above the neck pickup screw, the pickguard is in fine shape. It has shrunk and warped in all the correct places, but not excessively so, and the aluminium shielding plate can be seen underneath.

A neck date stamp of ‘Jan 64’ more or less ties in with the yellow ‘April 64’ date stamp on the black underside of the pickups, and an ‘OK’ stamp can be found in the neck pocket along with the paint stick shadow. 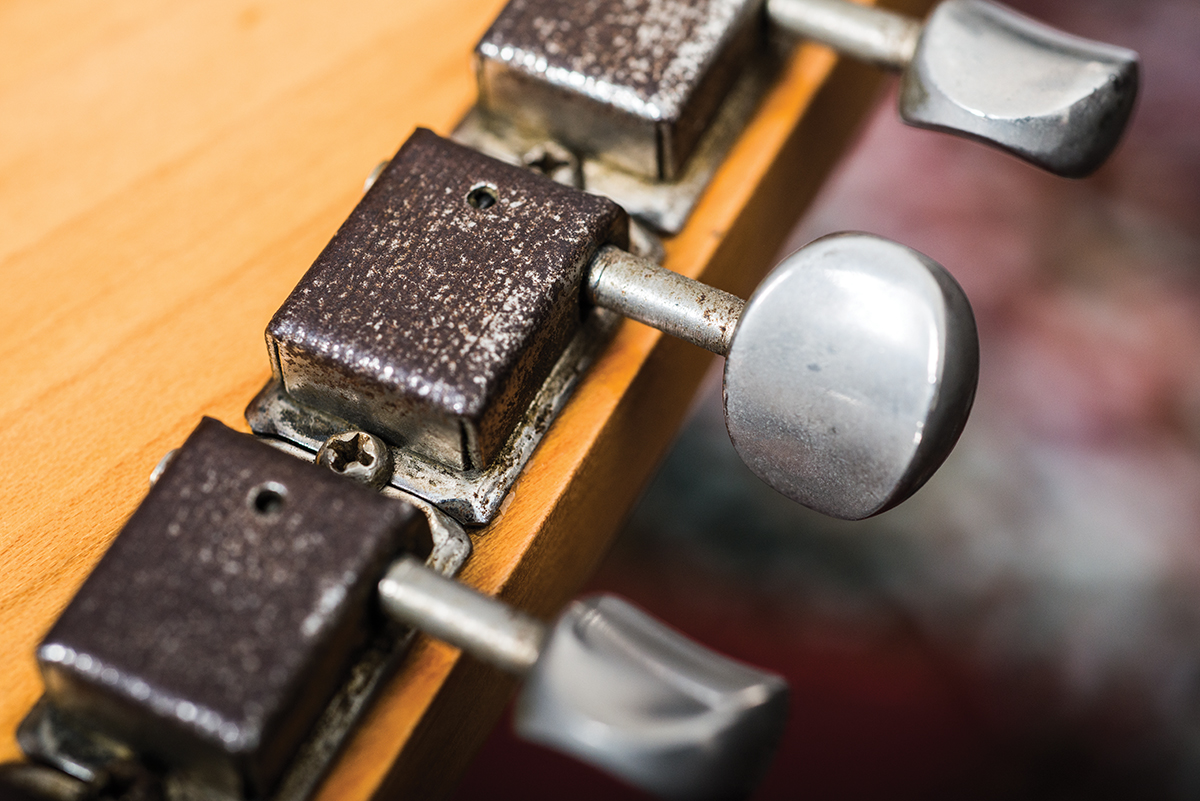 They may look as if they have seen better days, but the original single-line Kluson tuners work just fine

1964 Fender Stratocaster in use

When tapped, the neck and body produce B notes an octave apart, and when playing you can feel the vibrations through the body. It has a loud, full, bright and unusually muscular unplugged tone with ample sustain.

Thanks in part to a refret with jumbo wire, I can’t help wondering if this is what SRV’s favourite Strat may have looked and felt like when he found it hanging in Ray Hennig’s Heart Of Texas Music store in the mid-70s. This is a million miles away from the lithe and sculpted maple-neck Strats of the late 50s, and it’s the sort of guitar that needs to be shown who’s boss. 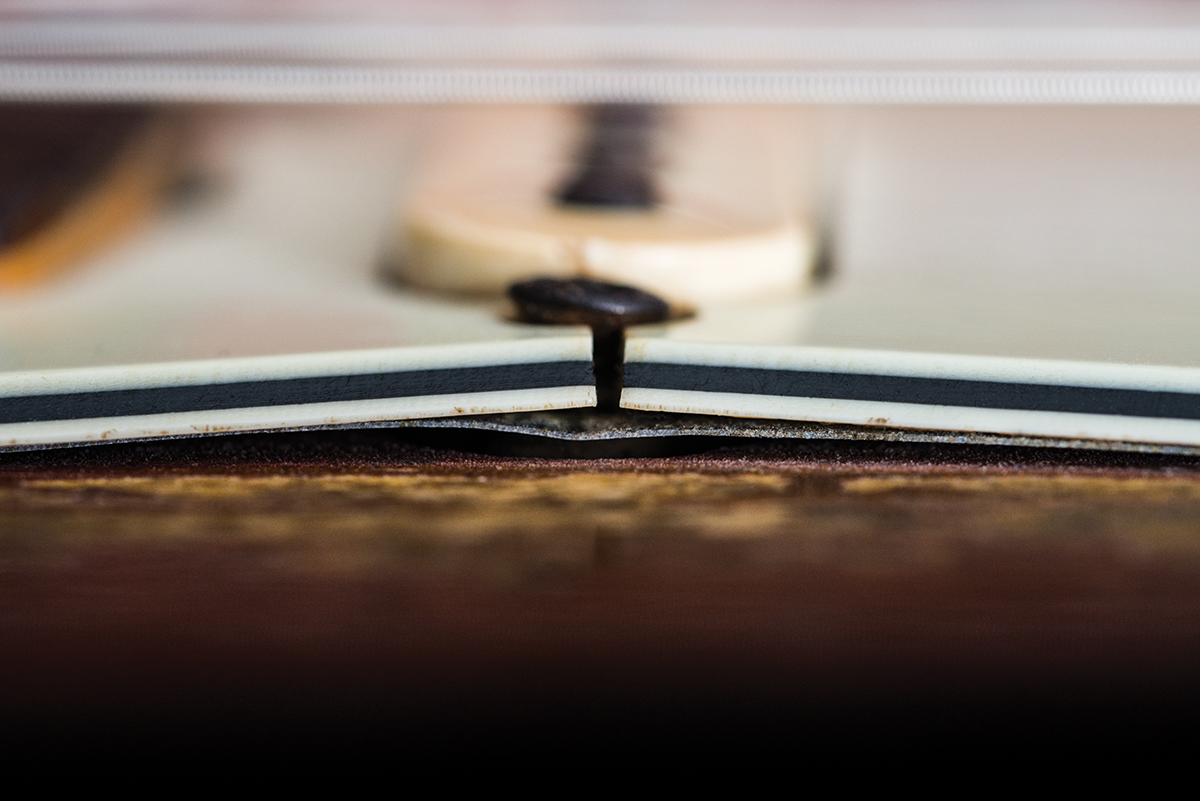 Whoever did the refret had the good judgement to leave the fingerboard well alone. Since it’s a veneer board, there’s not much wood to play with anyway, and although the playwear is extensive and plain to see, it doesn’t compromise playability one bit. However, the action is set pretty high and a basic setup followed by a period of regular playing would be needed to loosen this Strat up and get it back to its best. 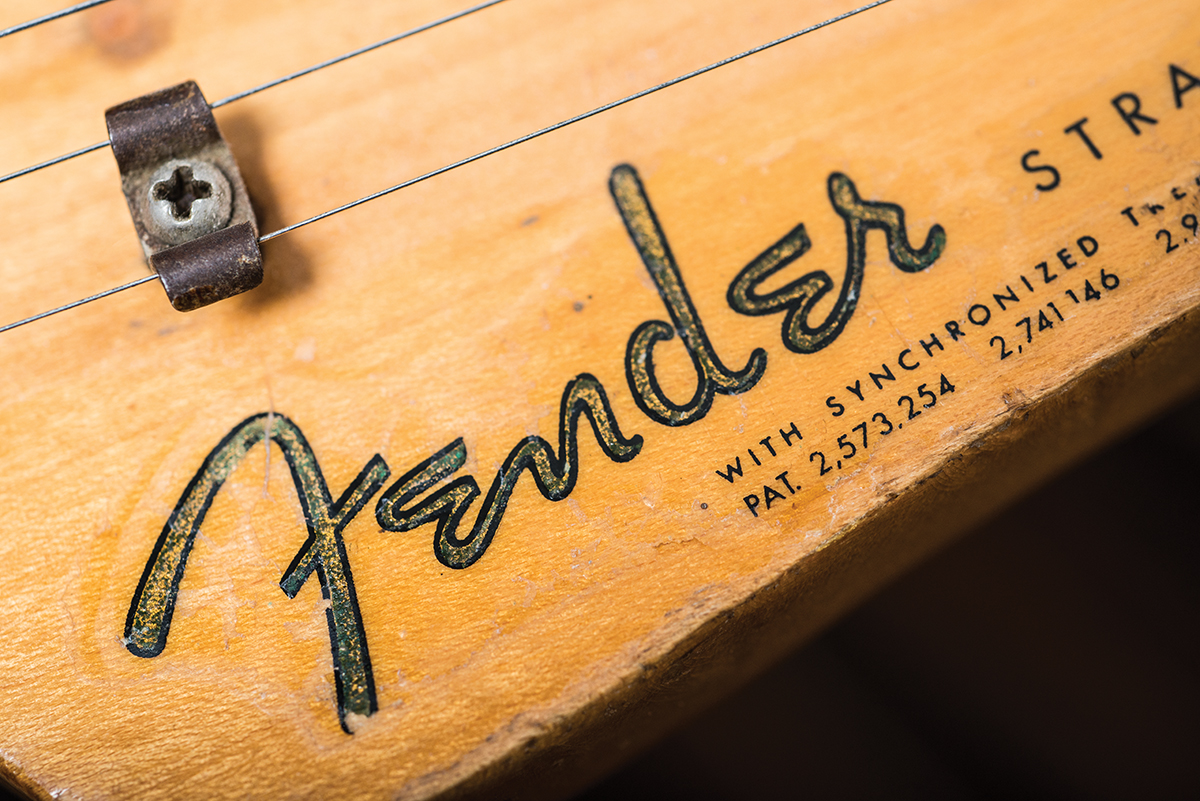 That wouldn’t be a hardship, because the tone is pretty special. It’s almost as if the frequency response has been tweaked to extend both higher and lower than a regular Strat. The low strings sound huge through every pickup setting, but there’s no boom or muddiness. Instead, you get a remarkably solid punch with taut definition and twang. 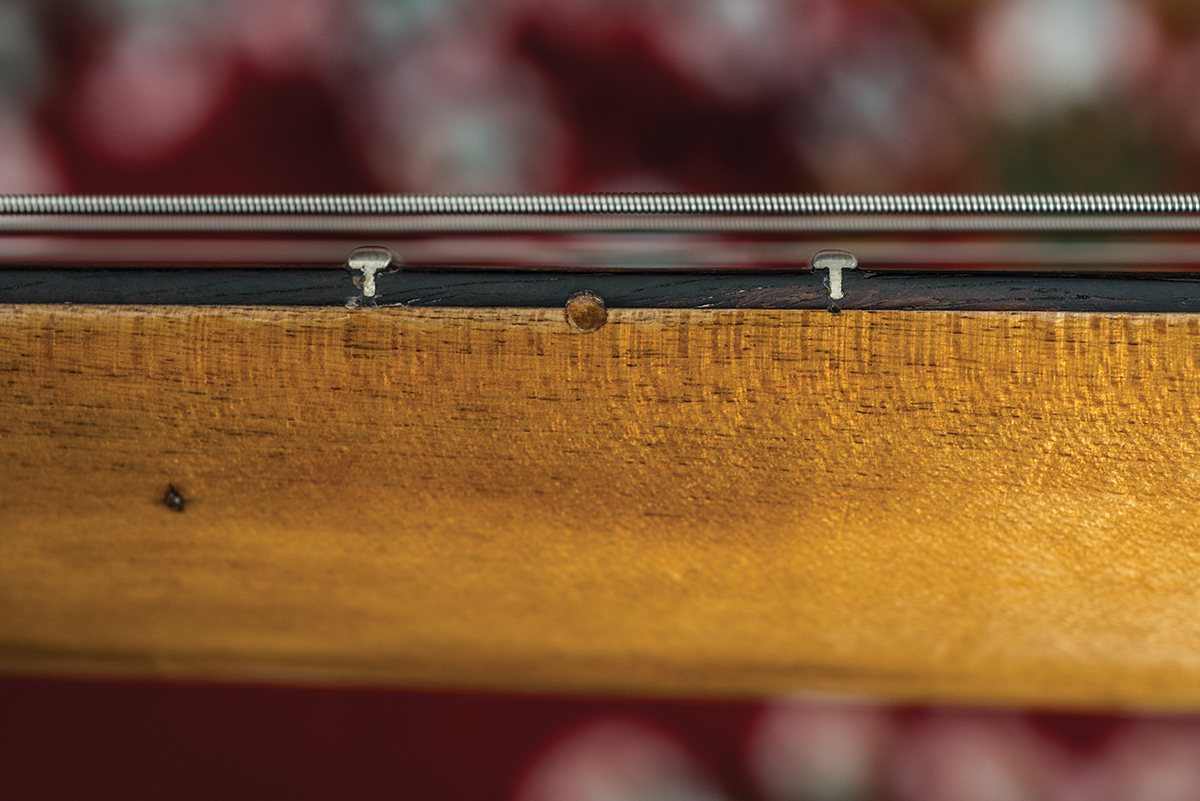 This Strat morphs from poppy, funky and percussive cleans to a full-throated and velvety roar with added gain. Through the TS-9, it does an odd thing whereby the sound gets brighter and sweeter when you turn down the volume. Then, when you turn up, the overdrive thickens and darkens into meaty and effortless sustain. 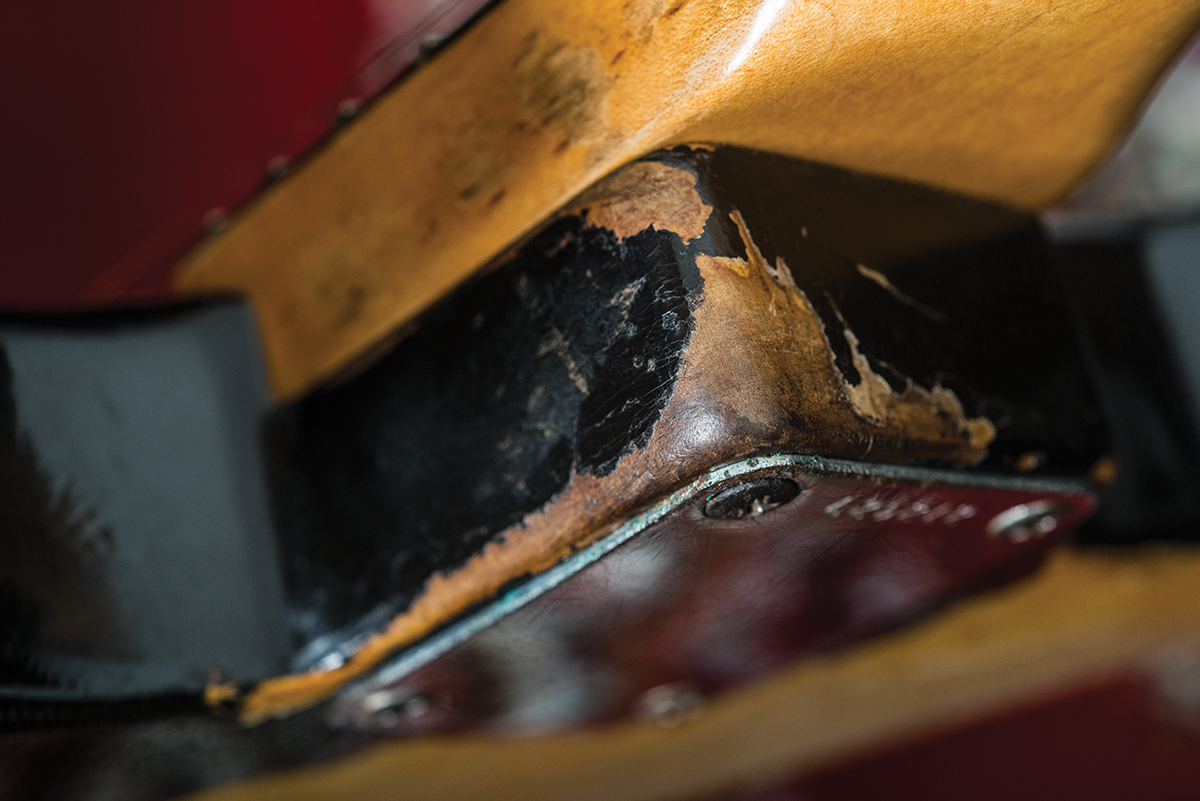 It’s maybe not for fans of delicate and refined Strats, but if you like to dig in hard when soloing and attack the strings with gusto when playing rhythm, this Strat will not shy away. In fact, I found myself instinctively playing harder than normal – more like I’d approach an acoustic.

Perhaps you’re wondering if the tonal character comes from the high action, high-output pickups or a combination of both. The truth is none of the above because I lowered the action before sending it back and the pickups all read around 6k. Every so often, you find a Strat that has more grunt and power than usual, and this just happens to be one of them.