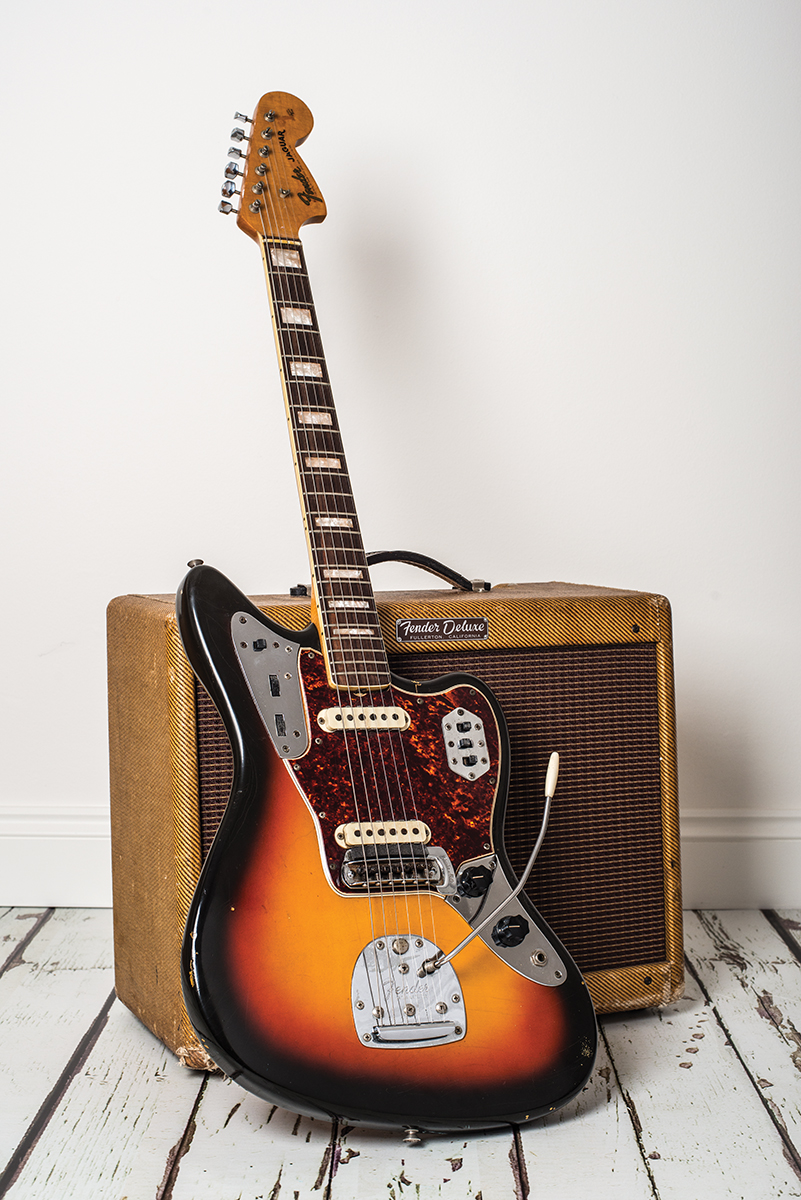 Although Fender made several different types of guitar before the CBS takeover, four models are clearly more significant than all the others. In a sense, the Jaguar was to the Jazzmaster what the Stratocaster was to the Telecaster. Both of these pairings demonstrate clear evolutionary steps, where the subsequent model carried some ideas over from the previous one, while addressing certain issues and introducing new features.
The Jaguar shares the Jazzmaster’s offset body shape, vibrato design and the rhythm-circuit concept, but it’s a very different guitar. Individual pickup switches replace the three-way toggle selector and the third switch activates a bass frequency roll-off filter. 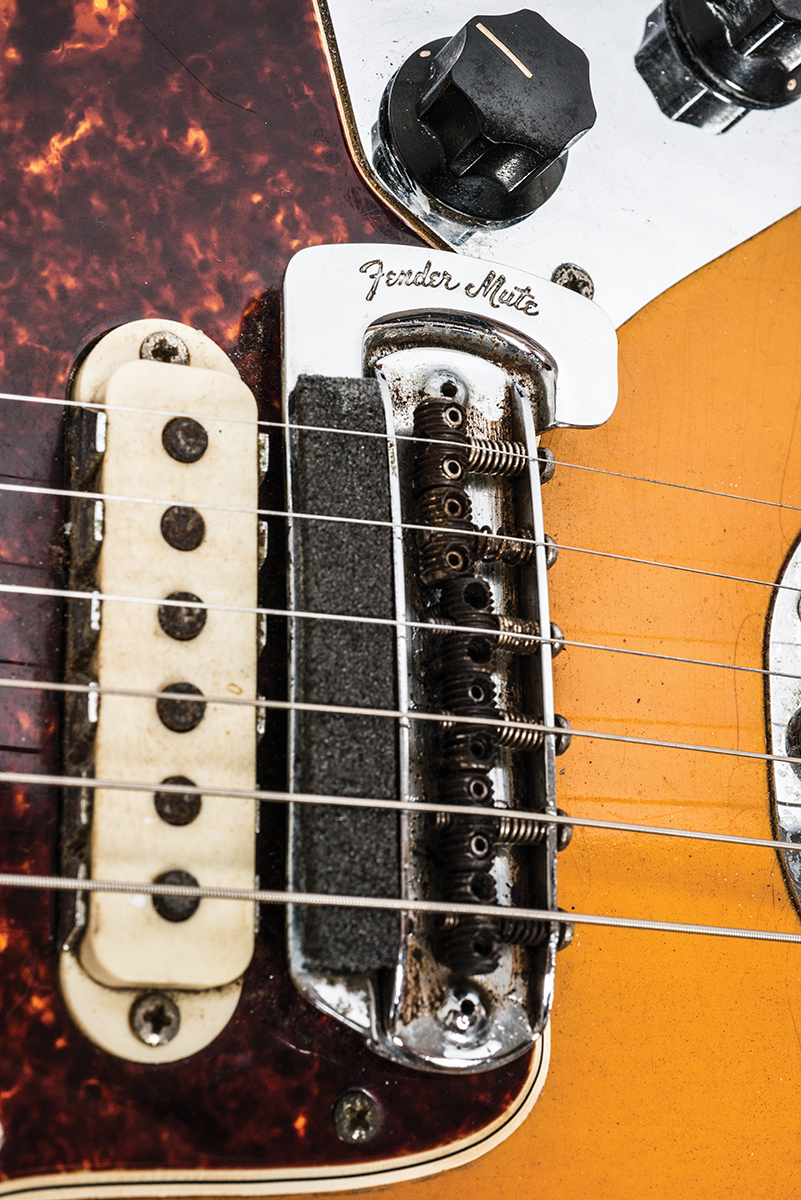 Mechanically activated string ‘mutes’ or dampeners were a popular feature on many guitars at the time, but the Jaguar was the first Fender model to have one onboard. It’s a spring-loaded device, with a foam strip that lifts to butt up against the strings. When deactivated, which will probably be most of the time, it can rattle a bit. The foam on this particular specimen is most likely non-original, but if a wider strip replaced it, the foam would contact the bridge pickup when deactivated and this might help to dampen any unwanted vibration. 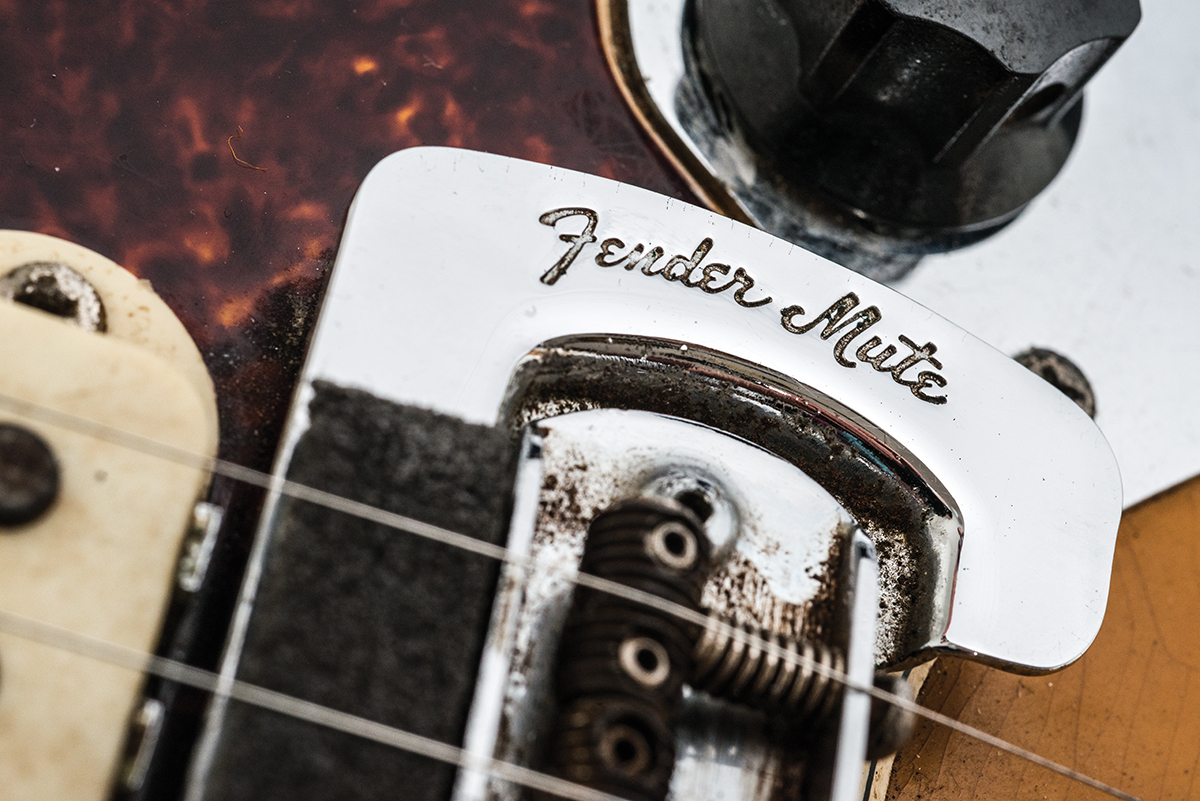 The Jaguar was Fender’s first model with an integral string mute. It’s great if you want to sound like Luther Perkins, but they can rattle

The pickups have a very different shape to the Jazzmaster’s, as Fender opted for a taller, narrower coil. It may look much like a Strat pickup, but the covers and flatwork shapes and sizes are not the same – plus, Fender used a notched metal surround to minimise hum – often called ‘the claw’. 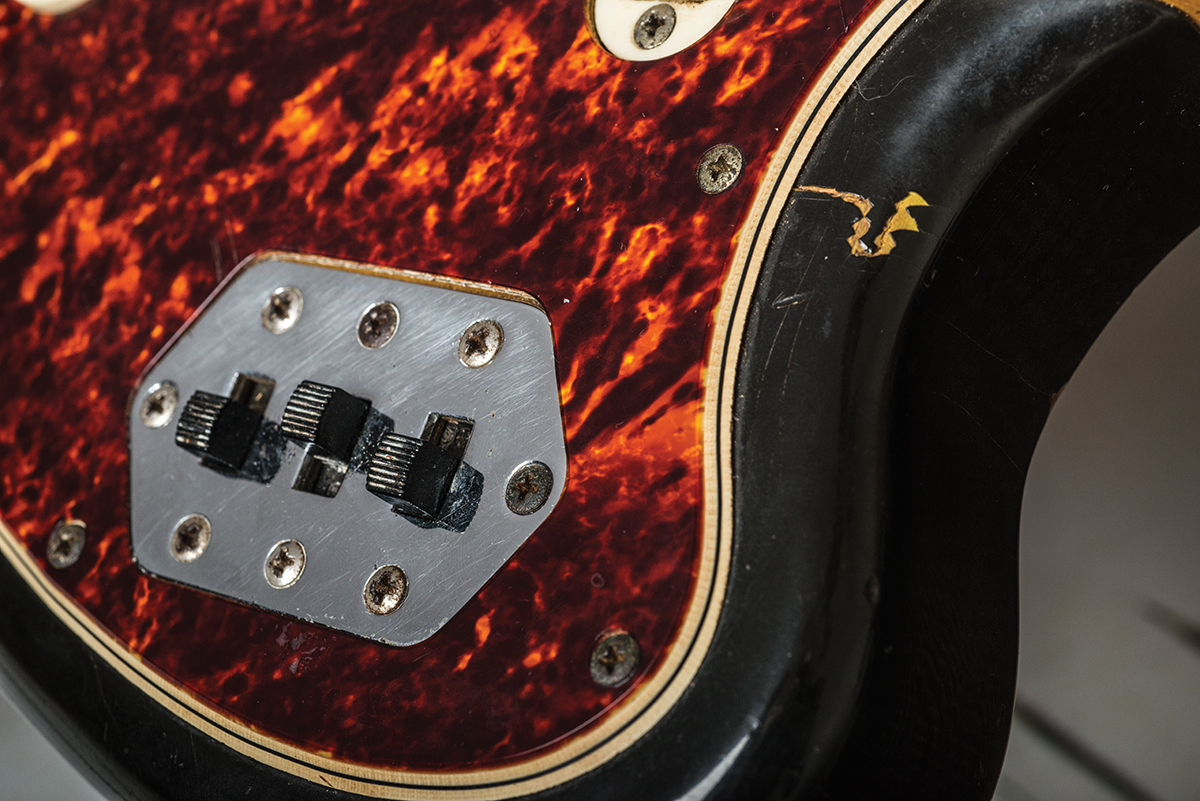 Two of these switches turn the pickups on and off. The third activates a preset bass roll off that opens up some interesting sonic possibilities

These Jaguar pickups have the post-64 staggered magnets, but it’s a very different stagger to Fender’s previous designs. The D and G slugs are highest, with the E slugs slightly shorter. The A and B slugs are the shortest and only just protrude above the cover.
Jaguar pickups are mounted directly onto the body with foam spacers rather than springs for height adjustment. The foam seems original on this guitar, because there’s no longer any upwards pressure and the heights can’t be adjusted. 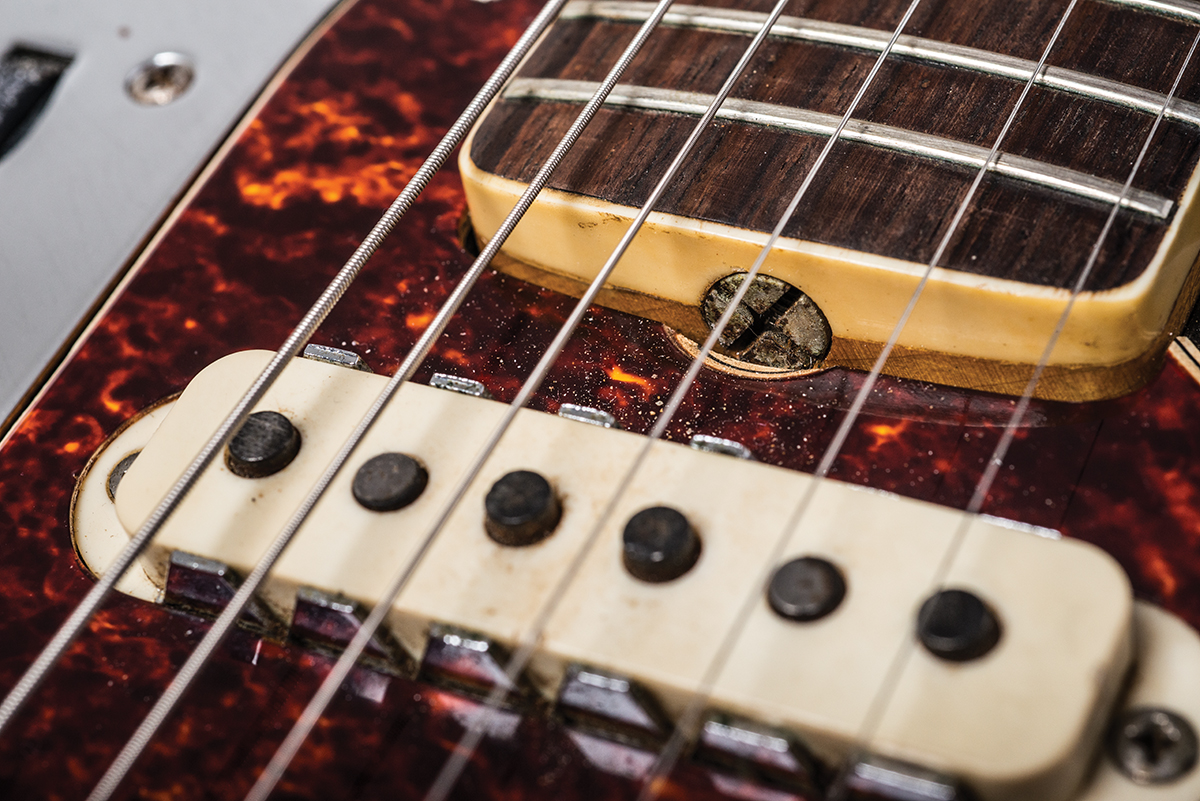 The serial number, bound neck, F-stamped tuners, block inlays and early-style headstock logo all indicate this guitar was probably made during the latter half of 1966, so the October ’66 neck date stamp seems spot on. The volume control pot is a 1M CTS, date-stamped the 17th week of 1966. All electronic components look original and untouched.
The Jaguar’s removable control plates were a return to the Tele concept of easy access for maintenance and, looking under the plates, you can see the vivid contrast between the darkened middle areas of the finish and the vivid custard yellow that was factory-original. The style of the sunburst and the application of the lacquer looks very different to the way Fender did it in the late 50s.

Compared to a ’59 Jazzmaster, the finish shows no sign of shrinking into the wood and it appears much thicker and more opaque. There are barely any grain lines to be seen. The outside edges are darker and the demarcation lines between the red, yellow and brown/black are sharper. 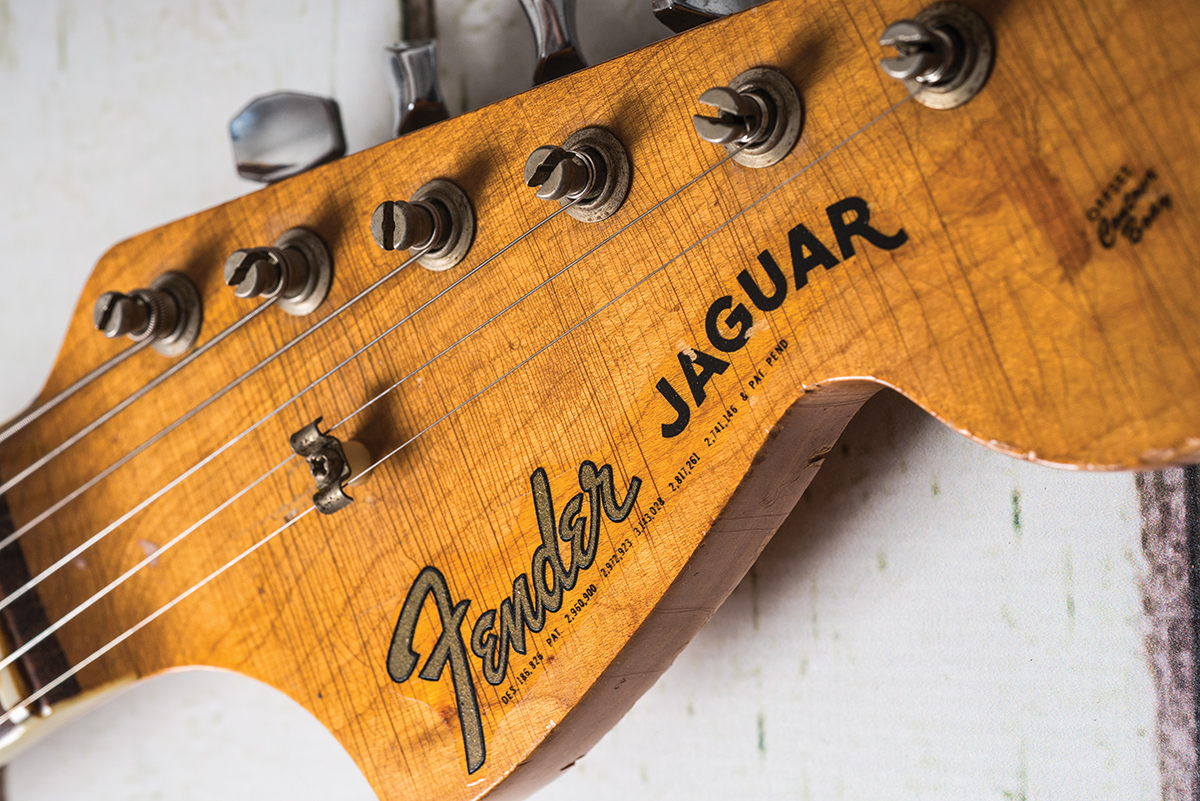 Lacquer checking is less evident and it tends to go across the grain rather than along it. Although most vintage-guitar enthusiasts would probably prefer the older-style sunburst, it’s worth considering that Fender may have been mindful about the advent of television and the sudden importance of getting noticed in a technicolour world by using bold primary colours.

Fender guitars generally had a longer scale length than Gibsons, but at 24 inches, the Jaguar’s was actually shorter. Bound fingerboards were another new feature for Fenders and, as with many of the company’s ventures into territory unknown, you get the sense it was still figuring out how to do it right. This Jaguar’s neck is curved until it meets the binding, then it squares off to the fretboard, resulting in a very pronounced shoulder. 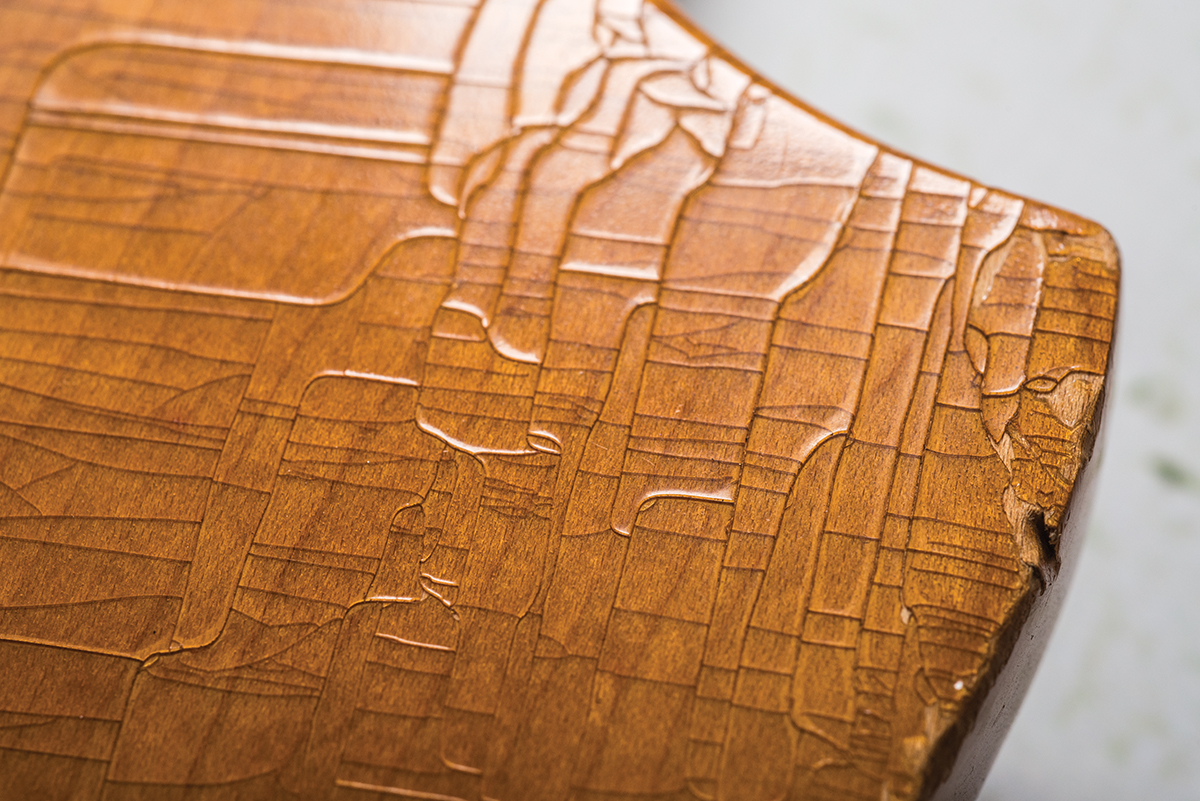 The checking on the rear of the headstock looks so different from the front, you might wonder if the lacquer was applied thicker or whether a different formulation was being used

The nut was installed flush with the fingerboard and the binding was cut around the ends of the nut. You can also see the top of the nut was lacquered over to blend it in. Presumably, the frets once had nibs, but although the original frets remain, the nibs wore away long ago. However, the fingerboard and inlays are in clean and fairly unworn condition.

Shortening the scale length gives the Jaguar a more familiar ‘feel’ than the Jazzmaster, simply because the frets don’t appear to be so far away. However, the flip side is that all the notes are much closer together, which may not be ideal for those with sausage fingers. The short scale also gives a looser and bendier action, but with a little less treble ring in the tone.

As vintage Fenders go, this is a bit of a heavyweight and you can hear it in the unplugged tone. This Jaguar sounds very balanced and it sustains willingly, but you can barely feel the body resonating. The short of finger will appreciate the shorter stretches and, overall, this Jaguar feels very easy to play. 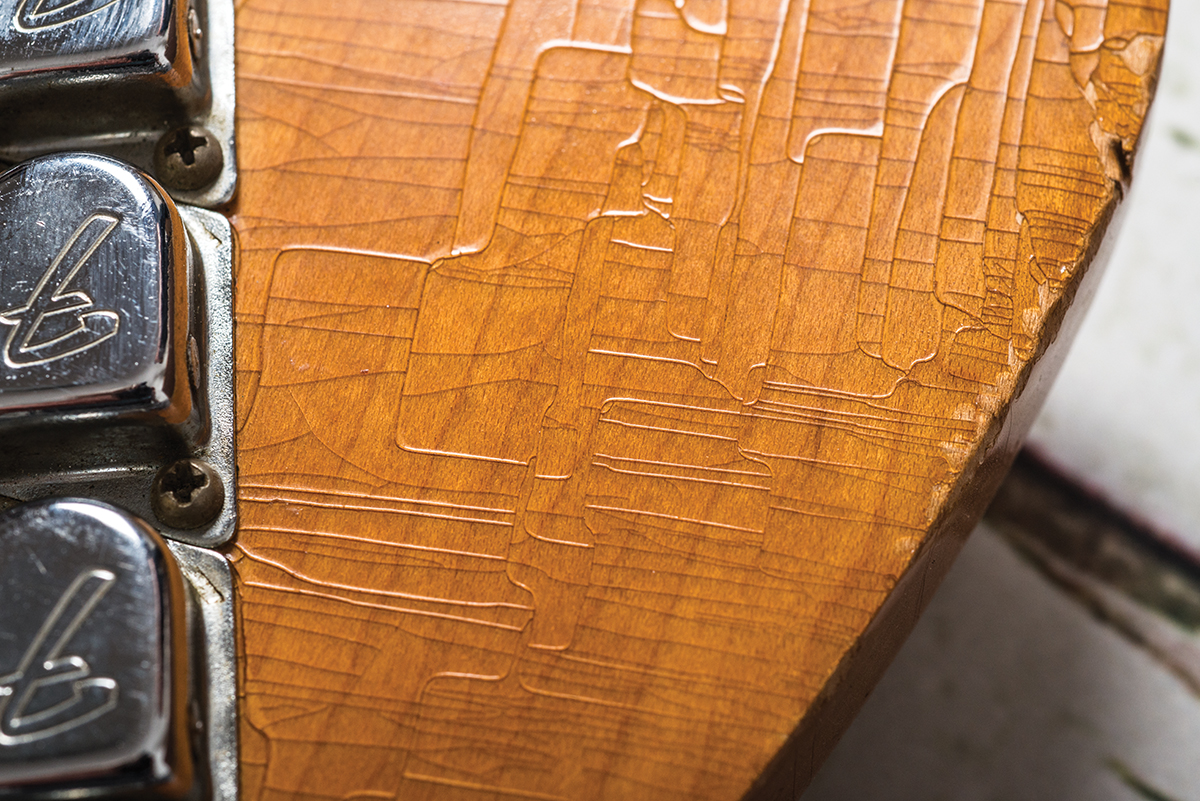 However, there is a problem with one fret divot and because it’s under the B string at the third fret, you can’t work around it. Since the other frets are low but serviceable, it might be better to consider replacing just the third fret rather than attempting to level them all.
Disappointingly, only the bridge pickup was working properly when we had this guitar. The neck pickup output was very low and I couldn’t get a resistance reading. However, the bridge pickup reads 6.3 ohms and the bass roll-off feature is in good shape. 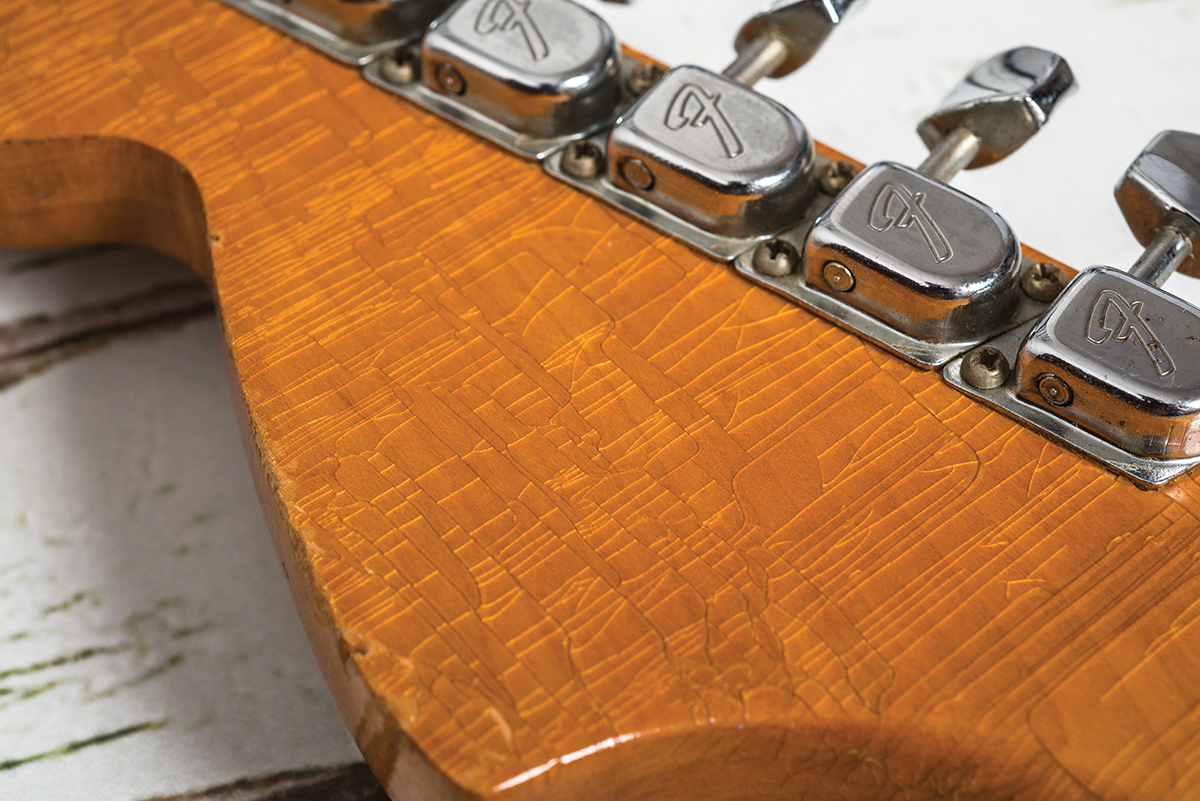 Both pots function normally, albeit a tad noisily, but it’s nothing that a squirt of switch cleaner won’t fix. So, in a sense, this is a review of half a Jaguar, and the worst case scenario is that the neck pickup will need a rewind.

The bridge pickup has a distinctive and unusual voicing, but it should be noted that the top of the cover is 7mm below the strings and the pickup can’t be coaxed upwards. The tone is relatively big and smooth, but the treble sounds more rolled off than you might expect, especially given the 1M volume pot. 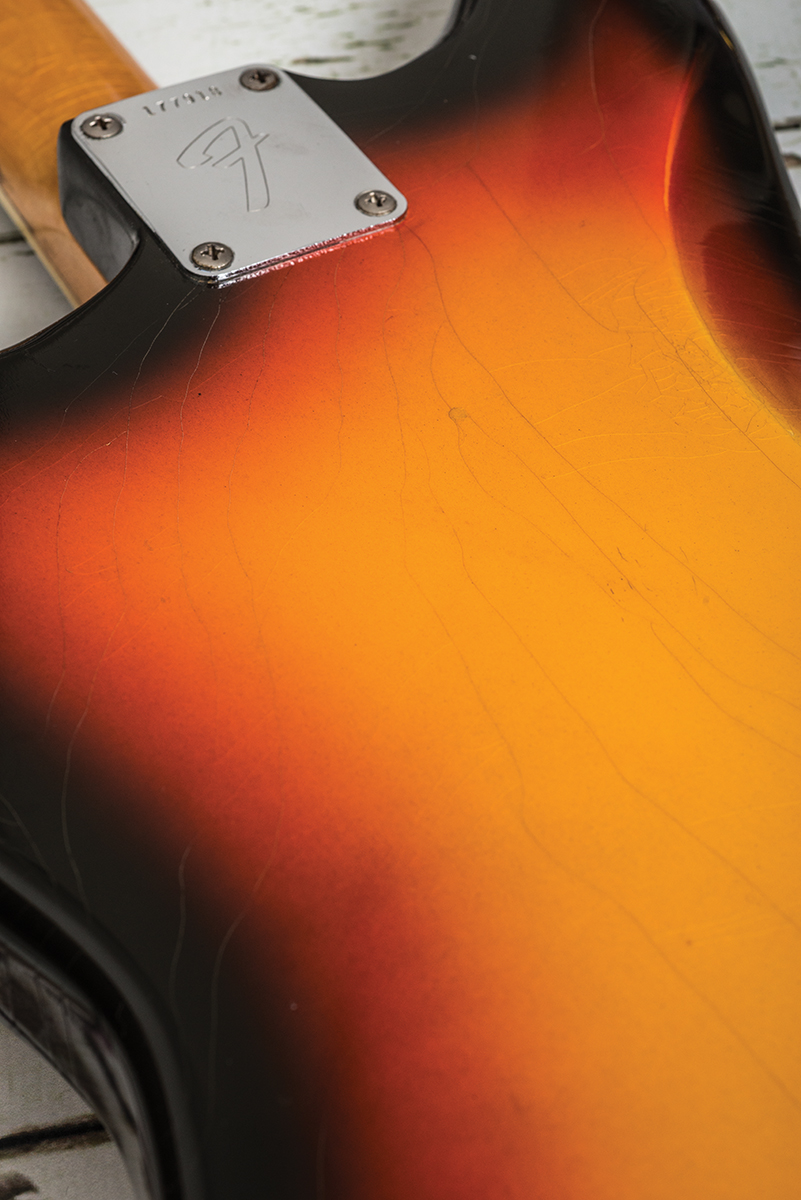 The centre of the burst is an opaque yellow that almost completely obscures the grain, and the red area is bright and unfaded

The bridge pickup’s wiry honk is really enjoyable and it produces absolutely classic 60s-style rhythm sounds. The upper midrange has a strong emphasis that’s not unlike a cocked-wah tone. Although there may not be that much call for bass cutting these days, it works particularly well for funky chops and also for clearing up murky fuzz tones. 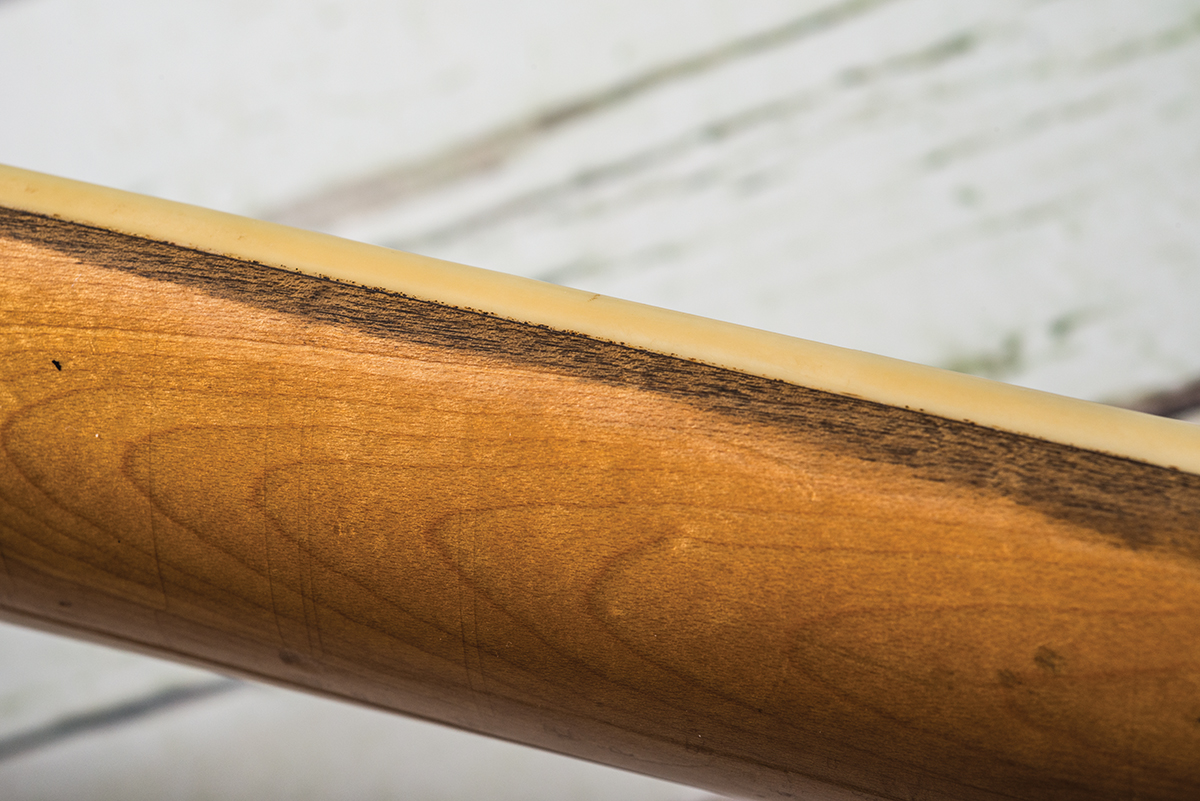 While it’s in great shape, the neck wear provides evidence that this Jaguar has been well played

With brighter fuzzboxes and a touch of reverb, the bass cut puts you straight into Spaghetti Western territory, as attention shifts to the grainy bite and clustered short echos in the springs. Another cool trick you can employ is to activate the bass cut and roll back some of the treble to achieve a band-pass filter effect for an unusual boxy overdrive. 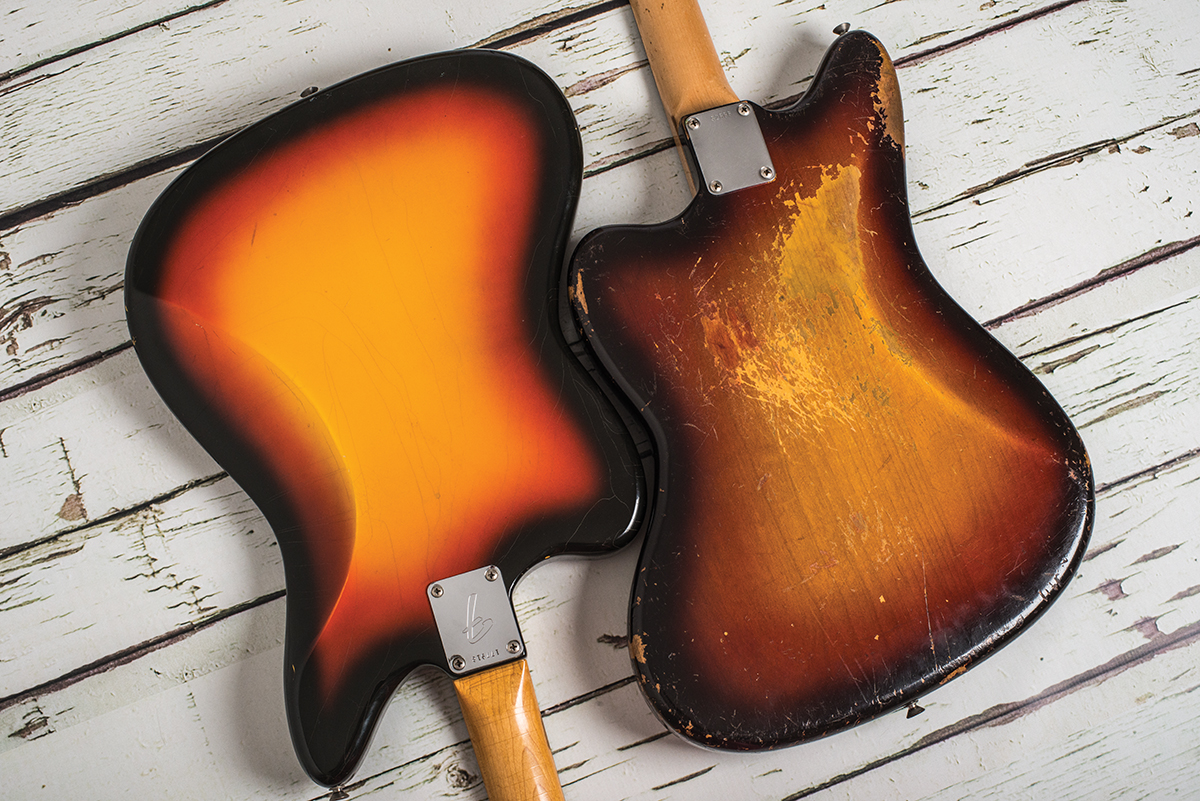 Not even a decade apart, Fender’s mid-60s sunburst style bears little resemblance to the ’59 sunburst on the right

This guitar is in very good, original condition and plays pretty well, even with old strings and an iffy setup. It’s a shame about the neck pickup, but I’ve heard enough to conclude this guitar has loads of potential – a fine example of a late-60s Jaguar.