Back in the 1960s, catalogue guitars were the backbone of the US guitar industry, and this Silvertone 1457 offered ultimate convenience with a guitar and amp combo. 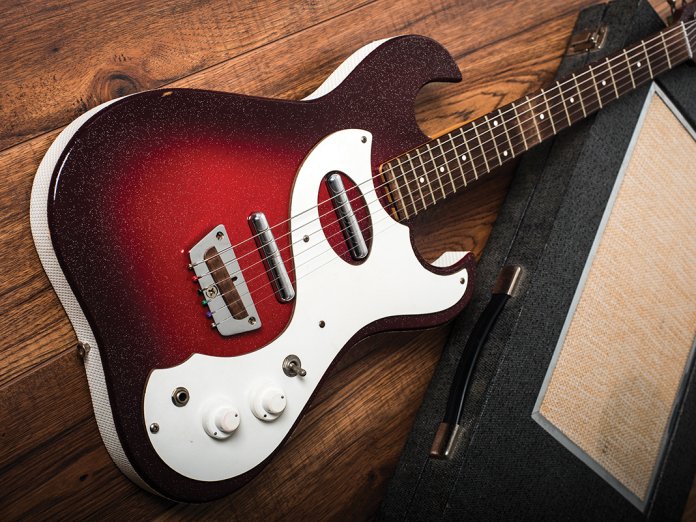 Next time you’re out shopping, pop into Argos and flick through the laminated pages of its famous catalogue. Inside, you’ll find a few budget guitar and amp packages aimed at beginners, but they won’t be anywhere near as cool as this 1964-’66 Silvertone 1457 guitar and case/amp combo, which was sold through the famous Sears mail-order catalogue. 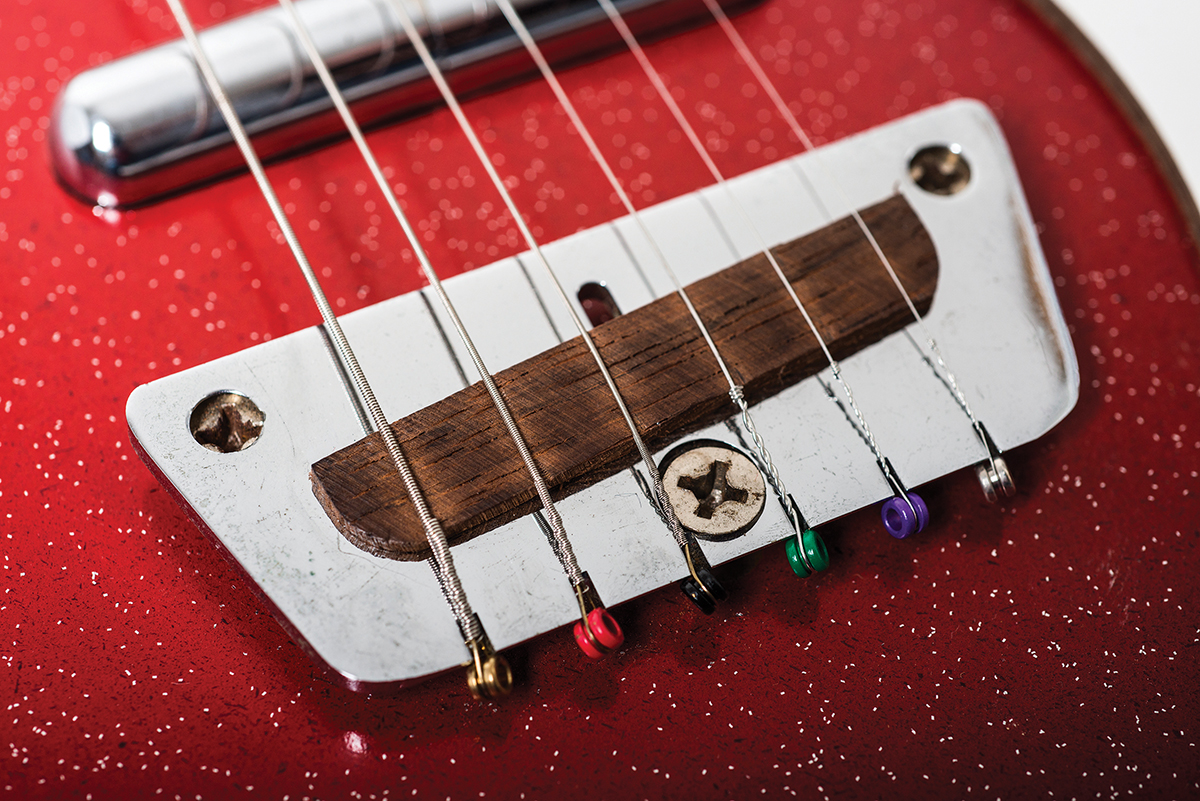 The Danelectro rosewood bridge could be moved around for intonation adjustment

Taking advantage of the explosion of guitar music, Sears commissioned various manufacturers to produce guitars and amps for its catalogue under the Silvertone brand – these included famous names such as Harmony and Kay, but in this instance we have a guitar made by Danelectro, and an amplifier built into a hard case, probably manufactured by Valco. 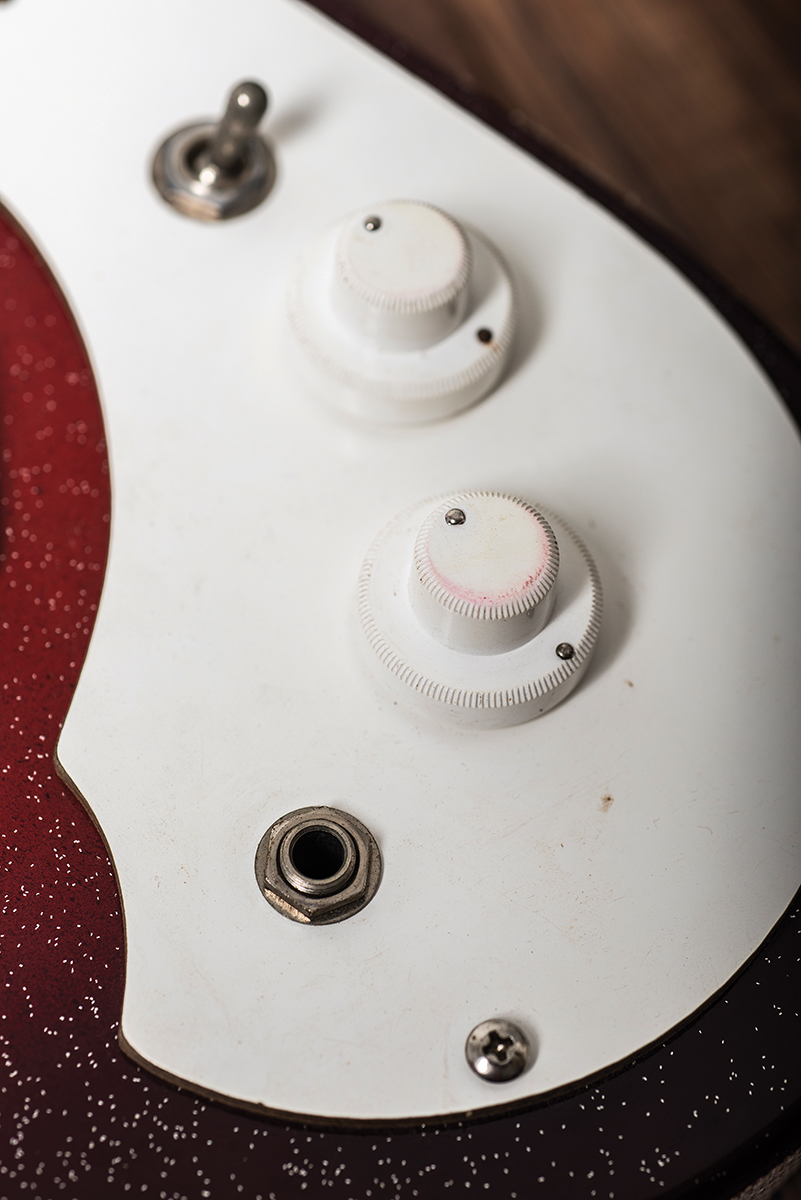 This may say Silvertone on the headstock, but all the usual Danelectro features are present, including the dual-concentric knobs

Sears described this compact combo as “our finest all-in-one guitar outfit” and when new, budding guitarists would have found a 45rpm ‘how-to-play’ record, some beginner charts and a pick inside in the case. There would also have been a wedge-shaped tremolo footswitch covered in the same vinyl as the hardboard case, but none of these items remain with this example. 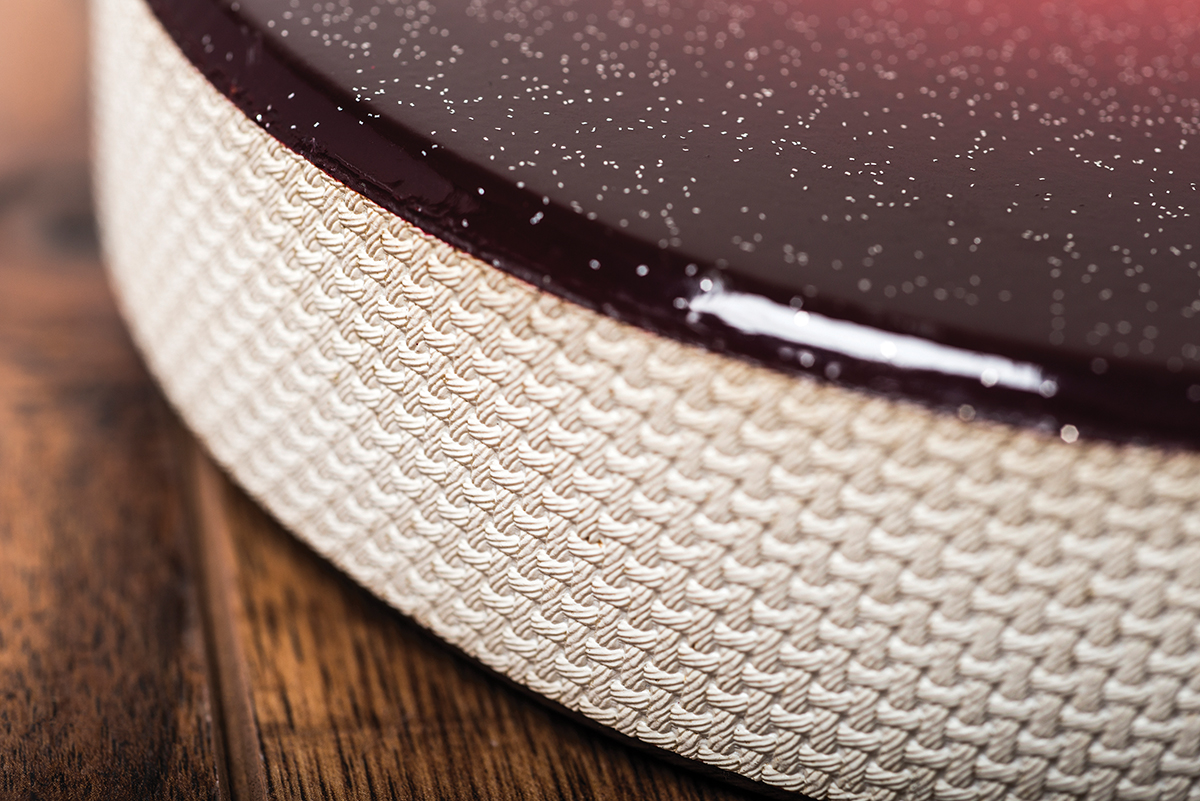 Like most Danelectro guitars, the hardboard body is held together by textured vinyl binding tape

That aside, the condition of both the guitar and amplifier/case is borderline remarkable considering that they were manufactured between 1964 and 1966. The date codes on the amplifier control pots correspond with late ’64, so we’d guess towards the middle of the production run since these were made in large numbers and parts would have been used up quickly. The 1457 replaced the black-finished but otherwise identical 1449 that was produced during 1963 and 1964. The guitar is exactly how it was when it originally left the factory, and aside from a handful of light belt buckle marks and a small chip off the lower bout, it’s almost like an NOS guitar. Curiously, the screw head adjacent to the switch is rusty, but all the others look shiny and new. 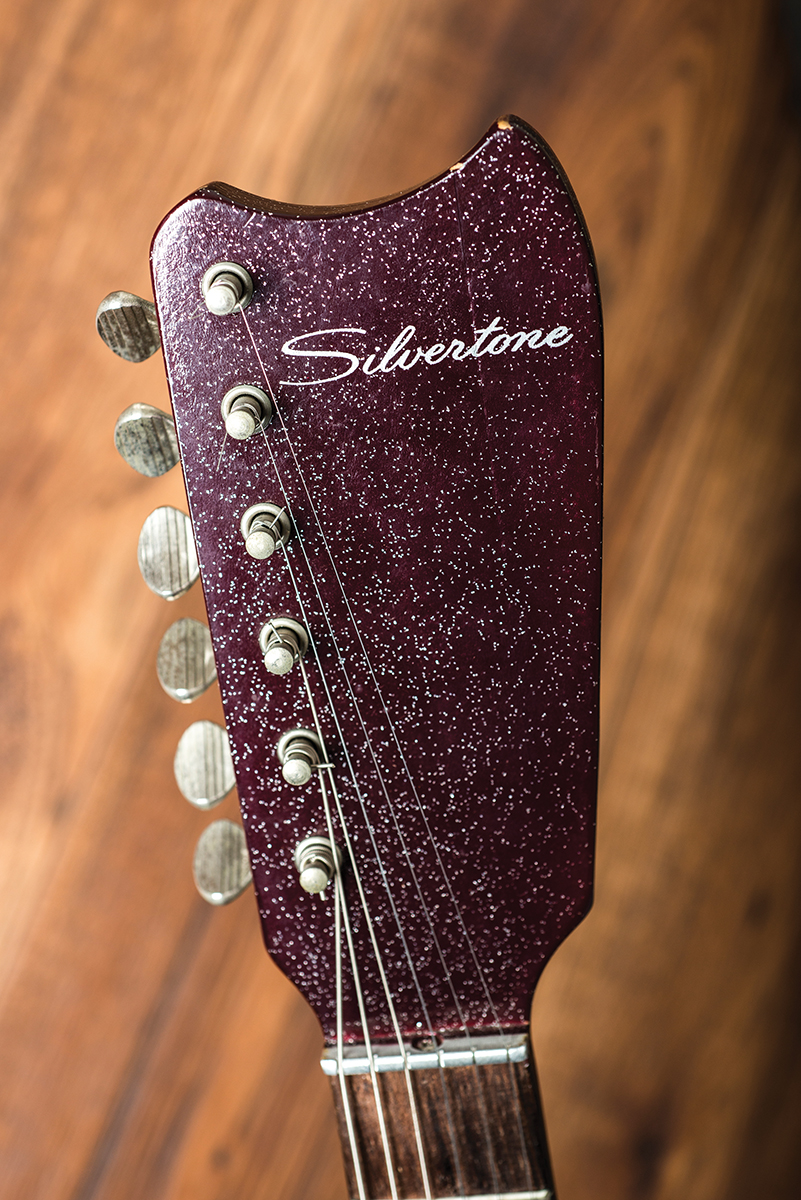 Although described as a ‘Redburst’ the colour is more of a purple burst overlaid with silver glitter. Danelectro’s approach to glitter application was about as discerning as drunk in a kebab shop at 3am. Indeed, glitter is absolutely everywhere – from the exposed wood sides of the neck heel to the back of the neck and even the headstock. It looks fabulous, of course, but it does make the back of the neck feel less than sleek. 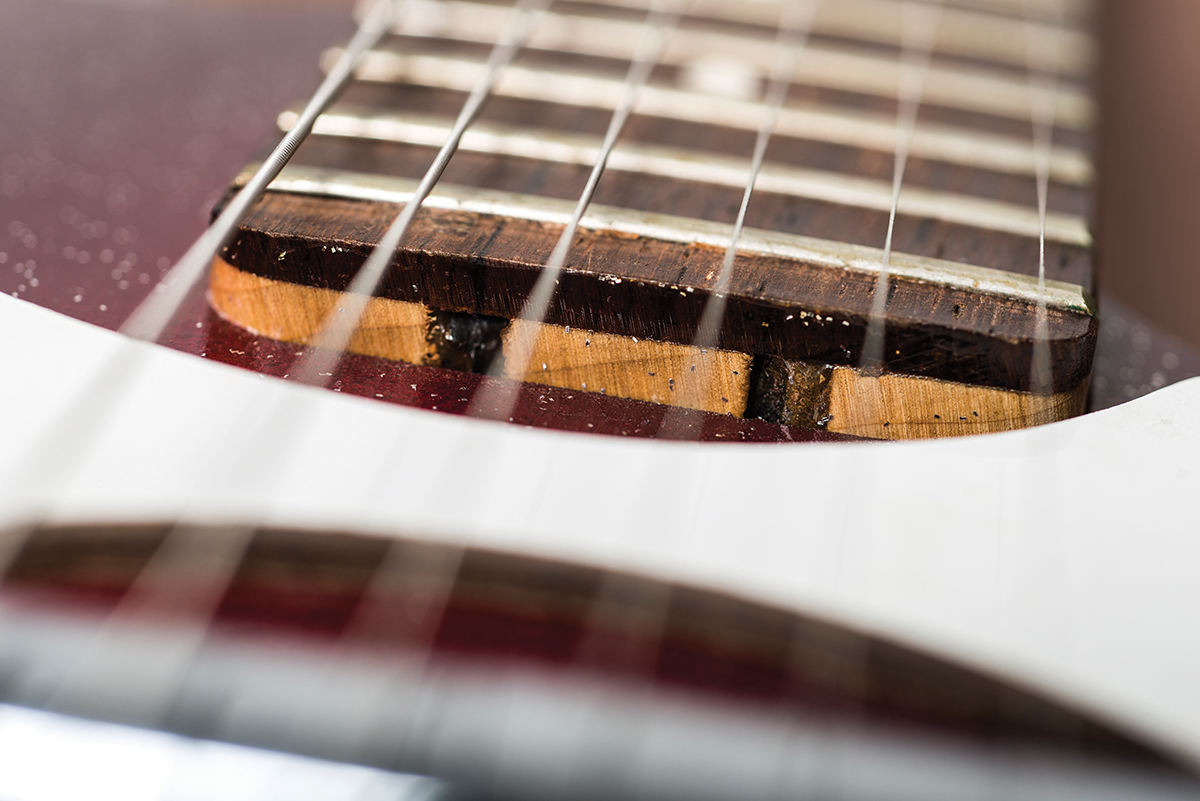 Rather than an adjustable truss rod, the neck is equipped with twin steel beams for reinforcement

All the classic Dano features are present, including dual-concentric knobs, a rosewood bridge wedge that can slide and twist for intonation adjustments and six-in-a-box tuners that work backwards. Best of all there are not just one but two ‘lipstick’ pickups because this is, after all, the more upmarket package. 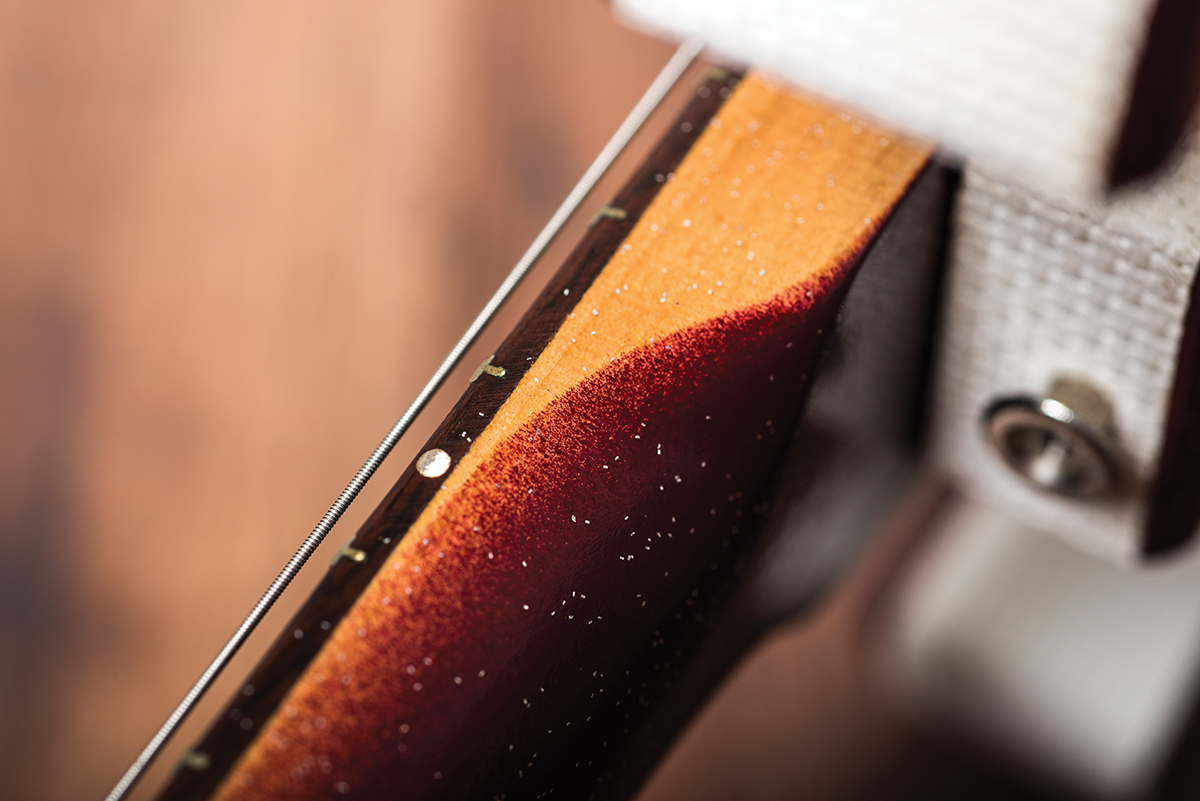 The glitter has been applied with reckless abandon

The amp is so clean and original that it’s still running on Silvertone-branded valves. The lineup includes two 12AX7s, plus a 6V6 and a 6X4 rectifier, and all four can be viewed through circular cutouts in the amp panel. The circuit is a fairly simple single-ended affair with the smallest output transformer we’ve ever seen, but there’s onboard tremolo with speed and strength controls that wobble the bias of the input side of the 12AX7 triode. 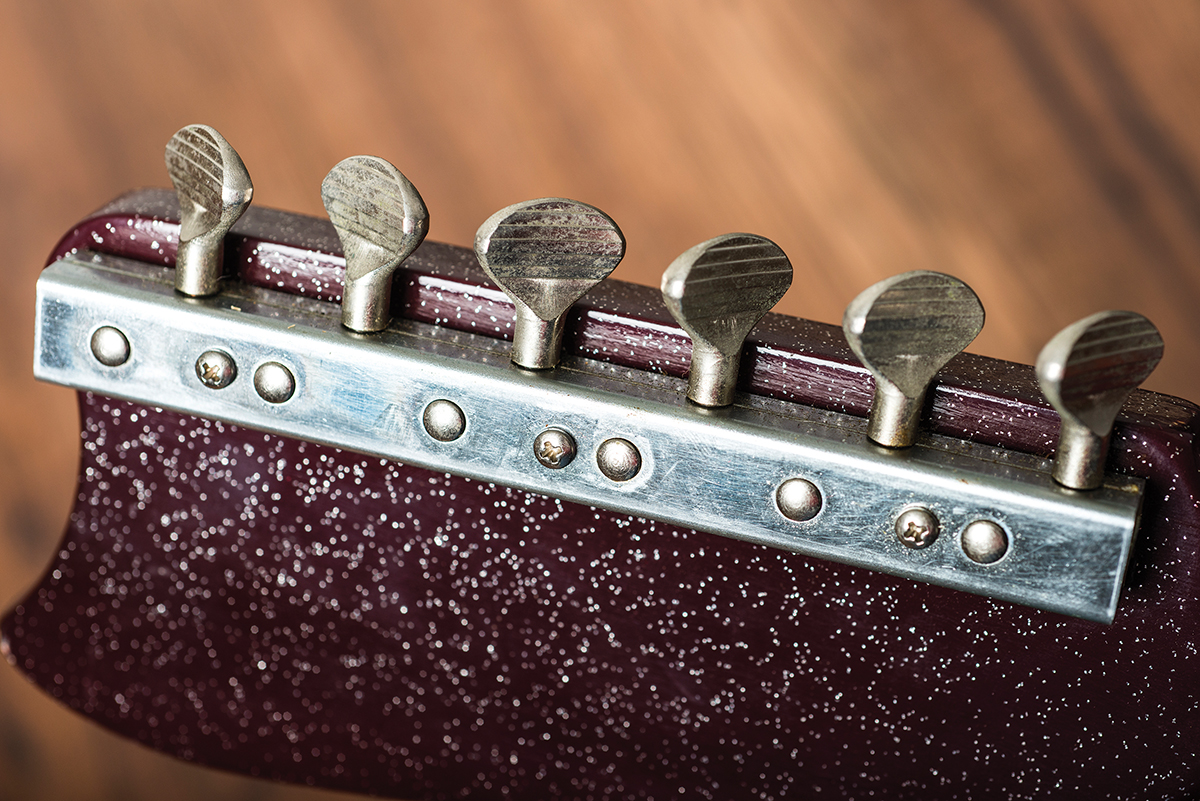 This amp runs on 110 volts, so it needs a step down transformer. Although when we first encountered this amp it had a two-prong mains plug, a properly grounded mains cable with a three-pin plug has since been fitted. Originality extremists may be interested to know that the original plug and cable remains safely inside the case should they prefer to dice with death by reinstalling it. 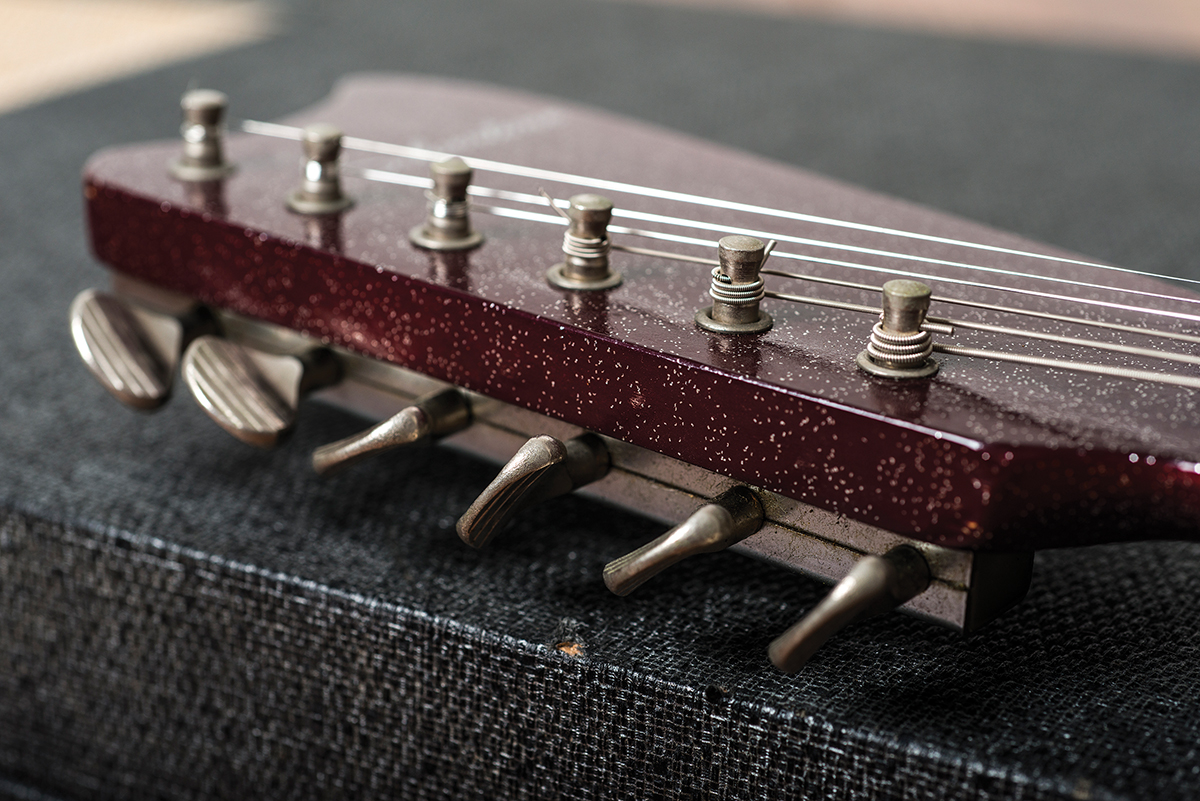 Most of the period pictures show the case standing upright and open. For stability there’s a locking metal bracket at one end of the case and you could use it flat on the floor too. Positioning the case upright places the “big eight-inch speaker” closer to ear height. The amp probably struggles to push four watts through this ceramic Jensen – date-stamped week 44 of 1964.

Just as the bumblebee is the most unlikely of flying insects, Danelectro guitars shouldn’t really work. A sandwich of construction-grade plywood and hardboard wouldn’t strike you as a toneful combination, but almost invariably they’re chimey, resonant instruments. Then again, the neck is maple with a Brazilian rosewood fingerboard, so it’s not all cheap stuff! 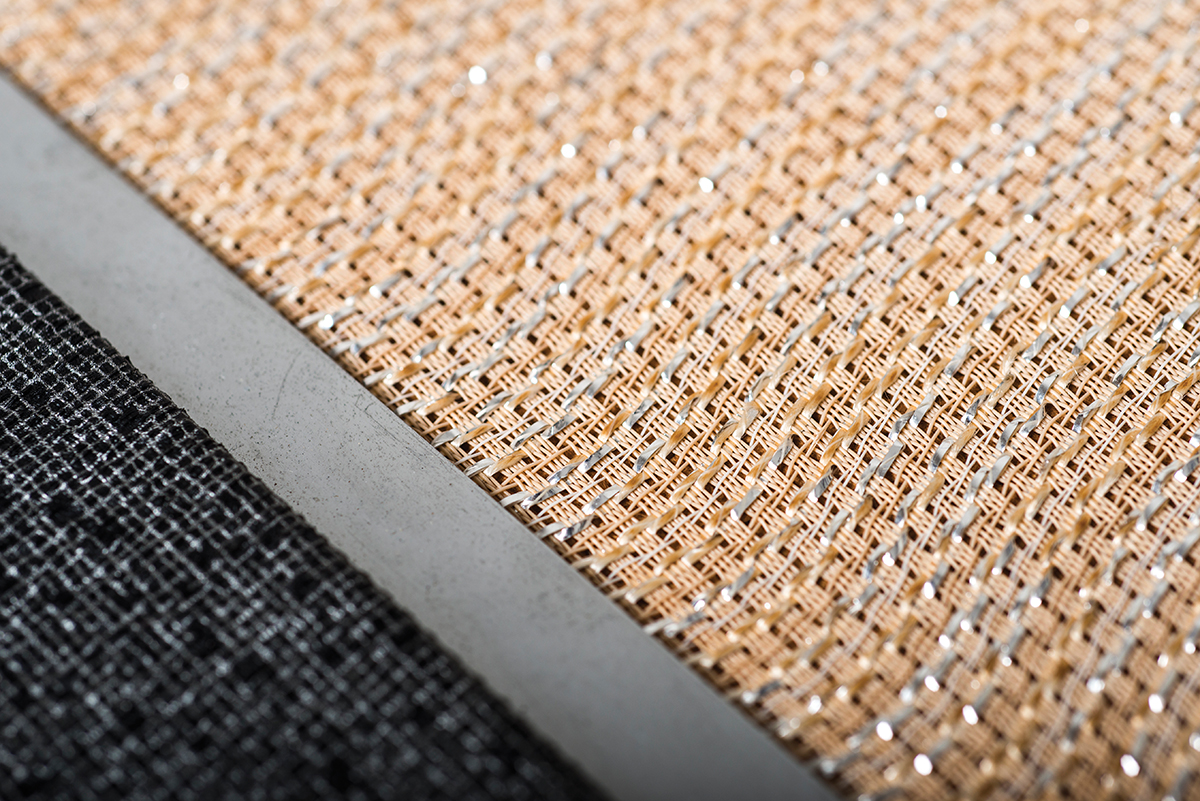 However, nobody ever bothered to sand the rosewood and you can actually see the marks from when the fingerboard was cut on a bandsaw in places. Danelectro’s approach to fret dressing was similar, with these having been levelled, but never crowned or polished. That said, this guitar is moreishly playable with a slinky and buzz free action and stable tuning. 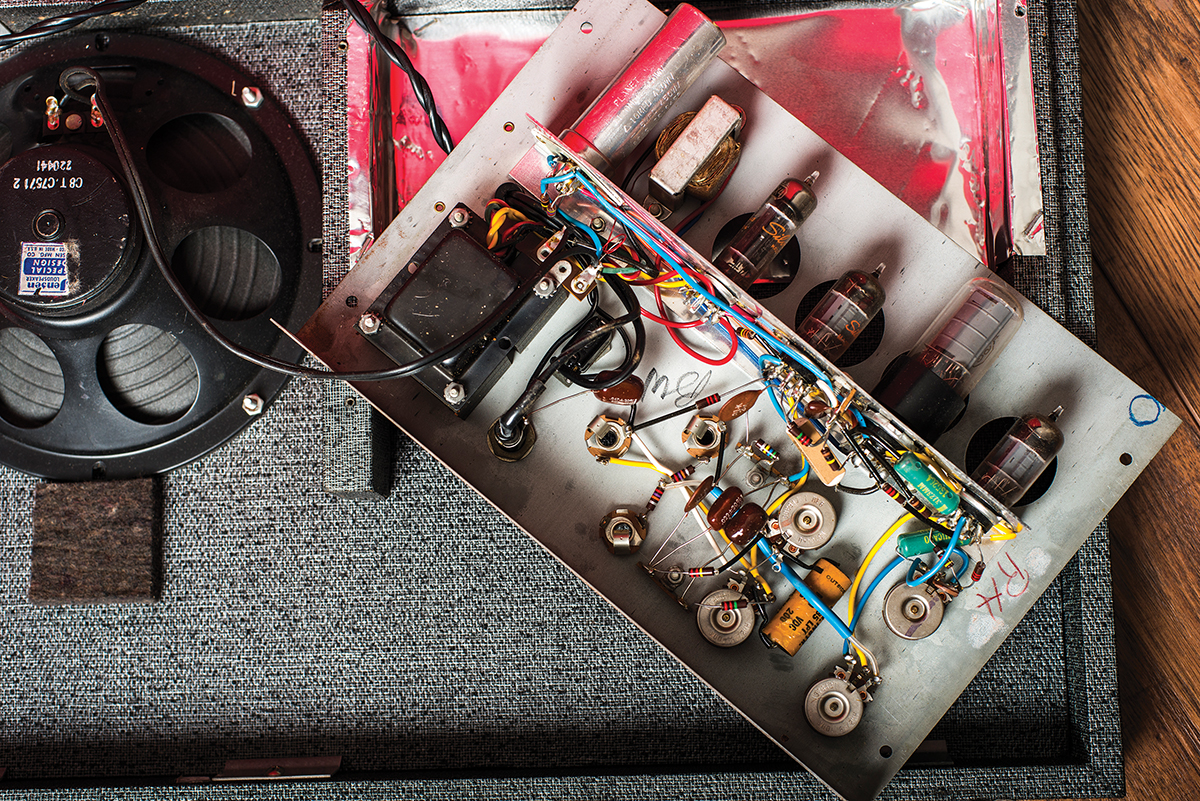 The amp circuit obviously has to be compact, and it features the smallest output transformer we’ve ever seen

The unplugged tone is closer to that of an acoustic than a solidbody. It’s fat, deep, forward in the mids and rings nicely through the treble. The electronics need some cleaning and freeing up after a long period of disuse, so things are initially confusing. The larger knobs at the base are individual volume controls and the smaller ones are for tone. When the switch behaves, you get neck/both/bridge but the middle setting is both in series rather than parallel. So you get the increased output and midrange associated with a humbucker. 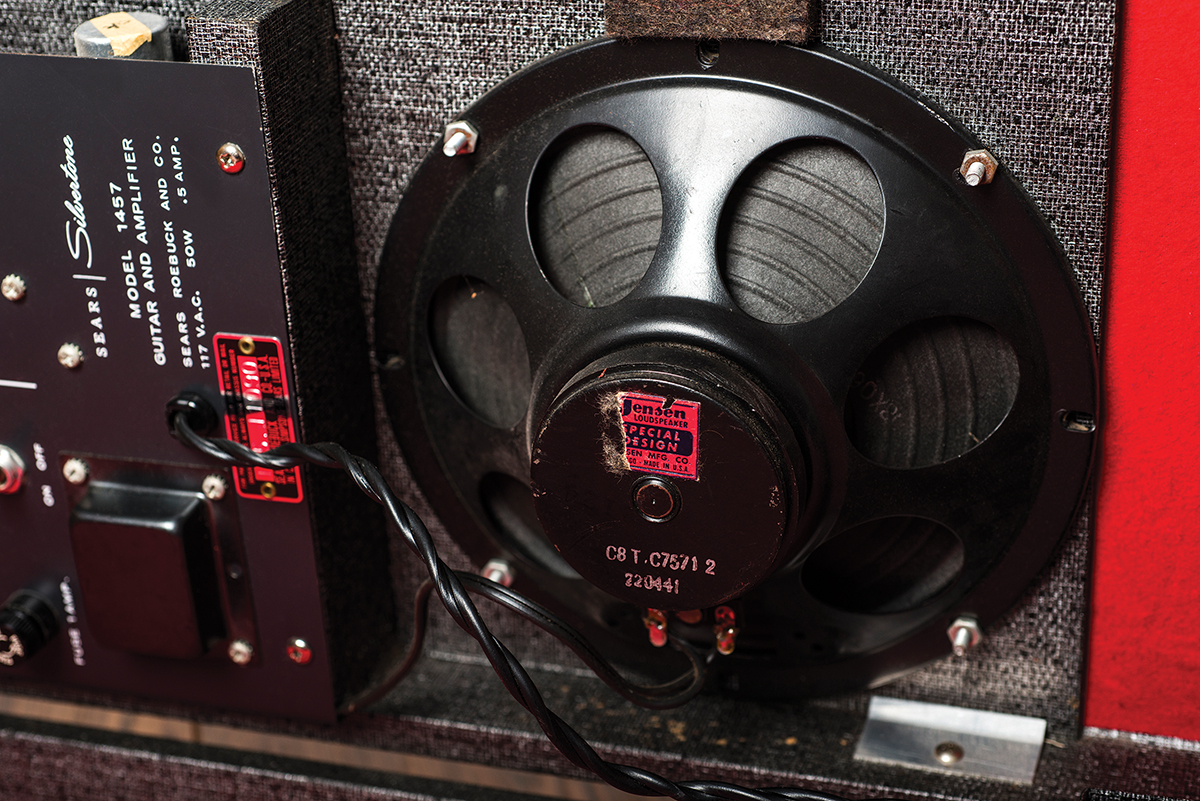 The pickups have an almost hi-fi clarity. The bridge has quack and an endearingly nasal twang while the neck is fatter, woodier and more vocal. Individually both also have a sweet sparkle that even the finest Fender-style single coils would struggle to beat and in series they take on a snarl that can easily overdrive an amp. 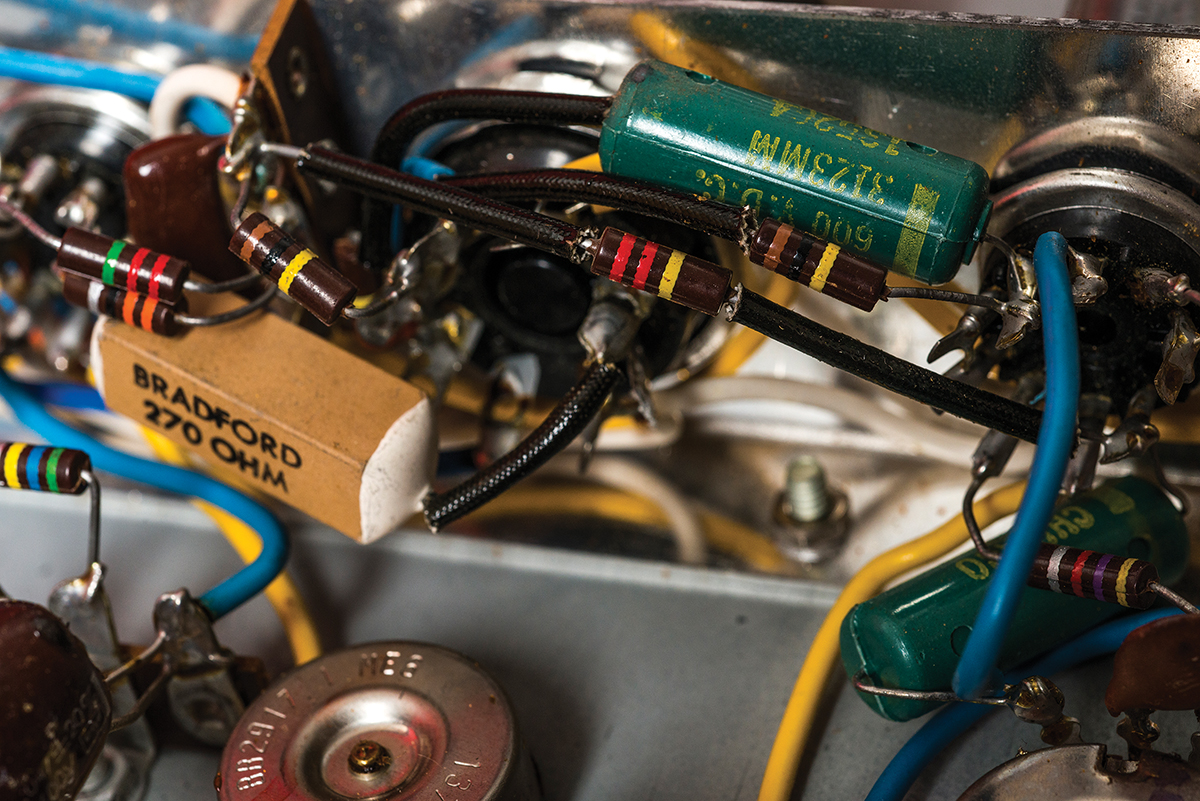 Inside the amp is remarkably clean and tidy for its age

For clean and overdriven roots and blues sounds, this guitar is endlessly intriguing and tremendous fun. After an hour or so the switch and controls started behaving better and with a little bit of a cleanup and minor setup work, this would be an outstanding player’s guitar.

We wish we could report that the amp is an undiscovered gem – though in a limited way it is pretty good. There’s relatively little clean headroom, but the tremolo works really well, it’s surprisingly clear sounding and the overdrive provides garage punk and lo-fi blues fun at socially acceptable volume levels. 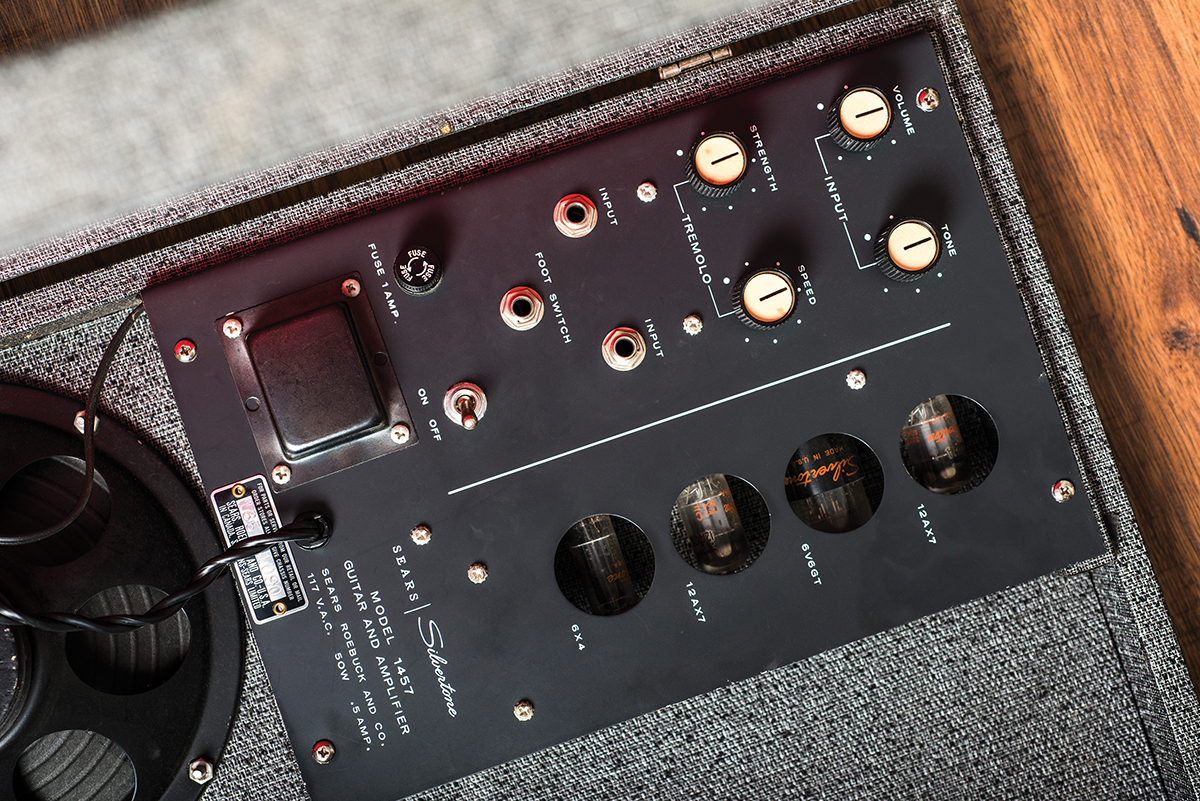 Amp valves can be seen through cutouts in the casing

While the guitar can hold its own with anything when played through a regular amp, it’s transformed into a period piece through the Silvertone amp. Assuming you already have an amp that you like, the case/amp can almost be regarded as a free gift that you’ll enjoy occasionally using at home and in the studio. 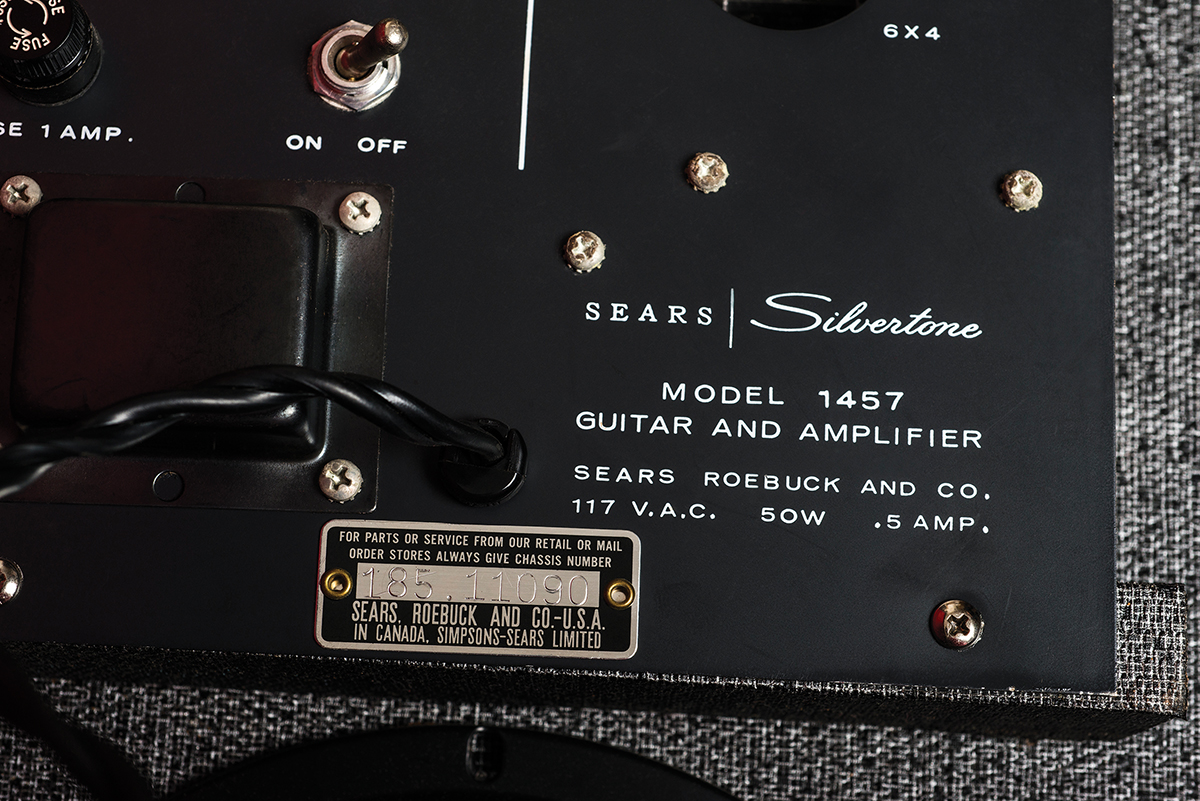 The amp was probably made by Valco in Chicago

Since these all-in-one packages were made for beginners, maybe those who took to playing them traded up quickly, leading to the Silvertones being tucked under the bed and simply forgotten about. Either way, they often look like they haven’t seen a lot of action and there are plenty about in excellent condition. This one is priced about right considering what these sell for in the US and the added costs of import and taxes, and you’d struggle to find a better example. 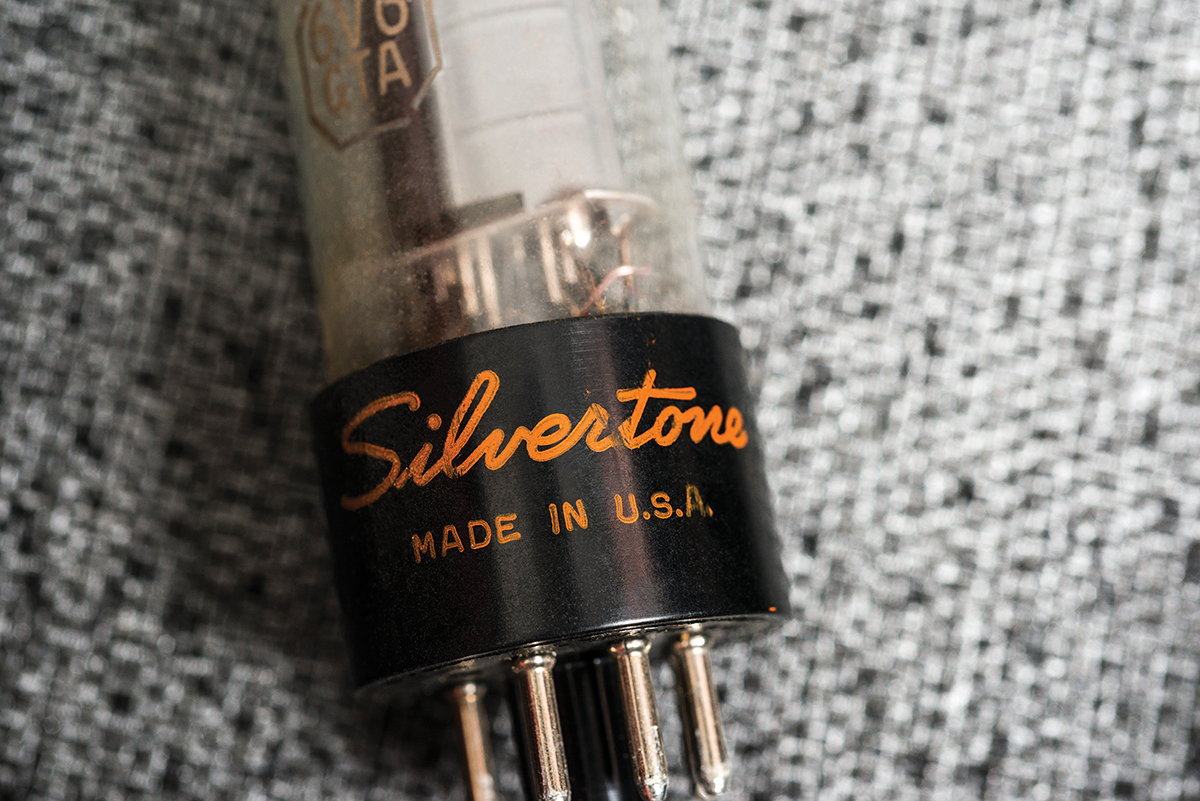 The amplifier even still has its original Silvertone valves