This played-in and wonderfully maintained Les Paul Special challenges some of the conventional wisdom on Gibson’s student rebels. 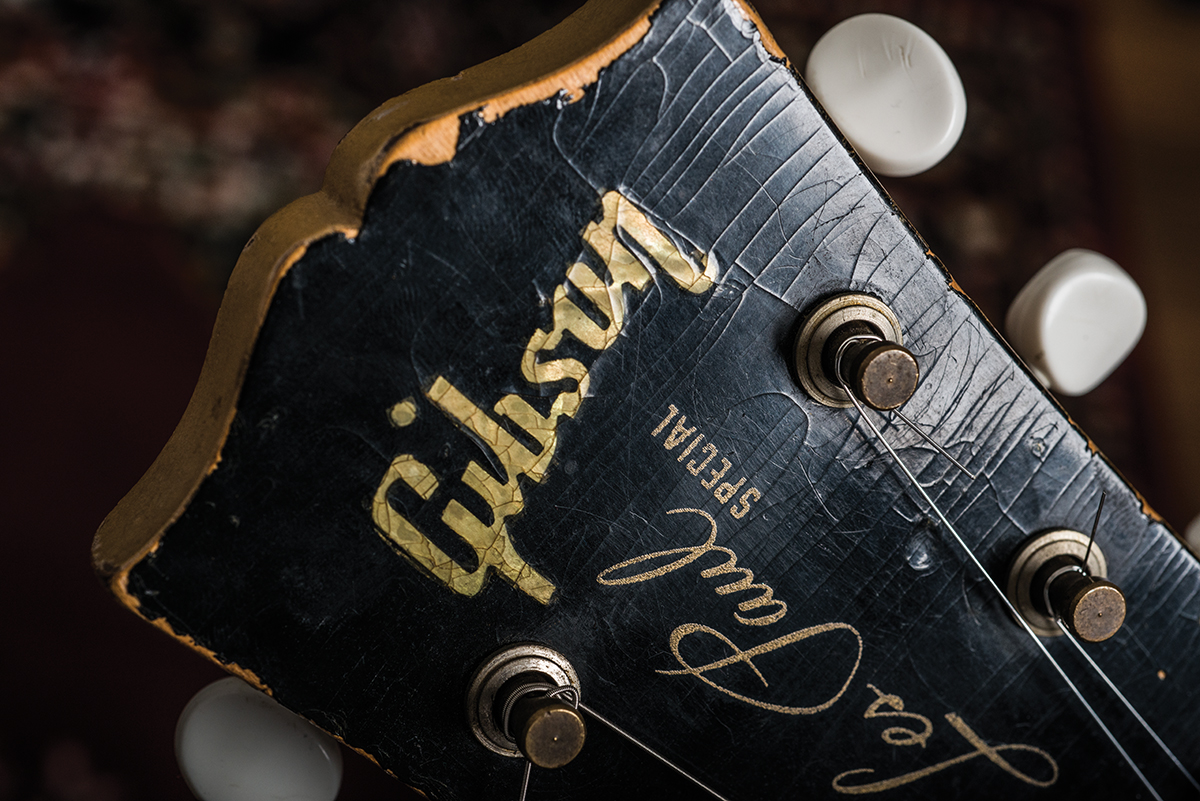 Anyone buying an entry-level electric might reasonably expect a lower grade of wood, pickups and hardware. However, back in the 1950s, Gibson cut corners on its ‘student’ guitars by streamlining the production process with flat rather than carved tops, minimal binding and simpler finishes that required fewer stages on the production line. In every other respect, the quality was up there with the top-of-the-line models. 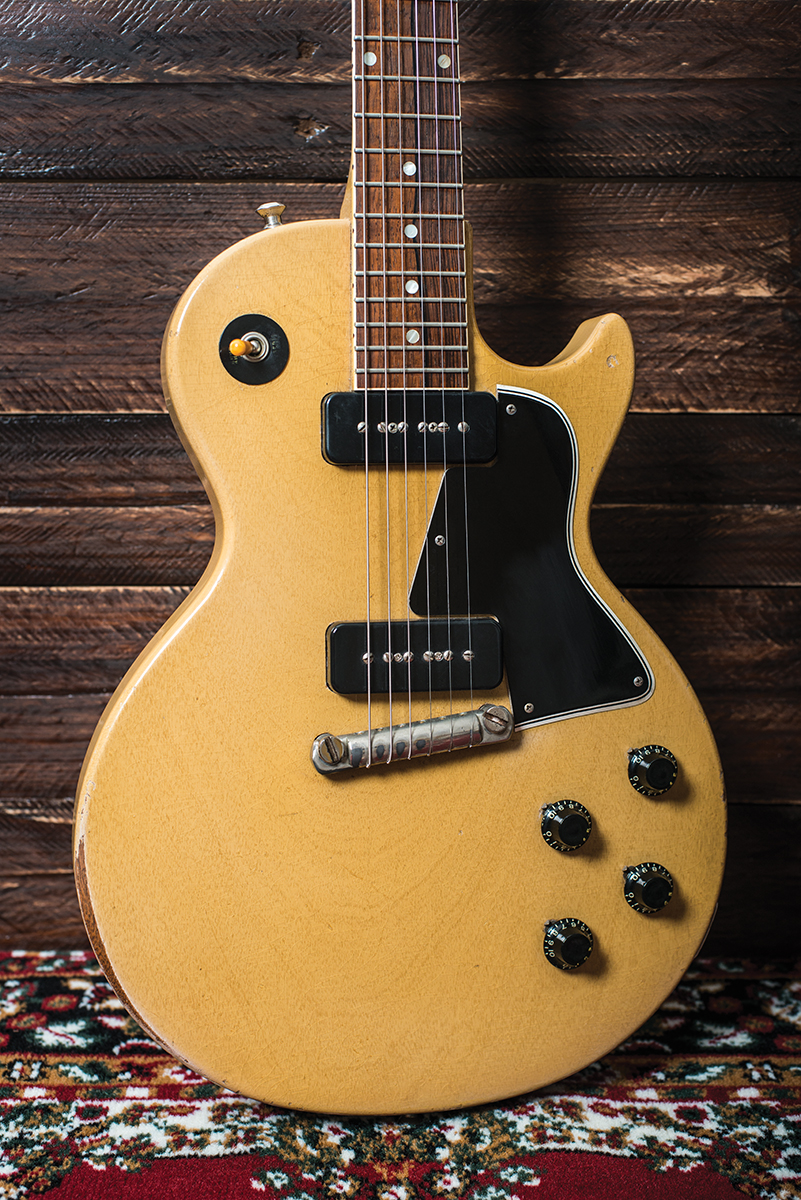 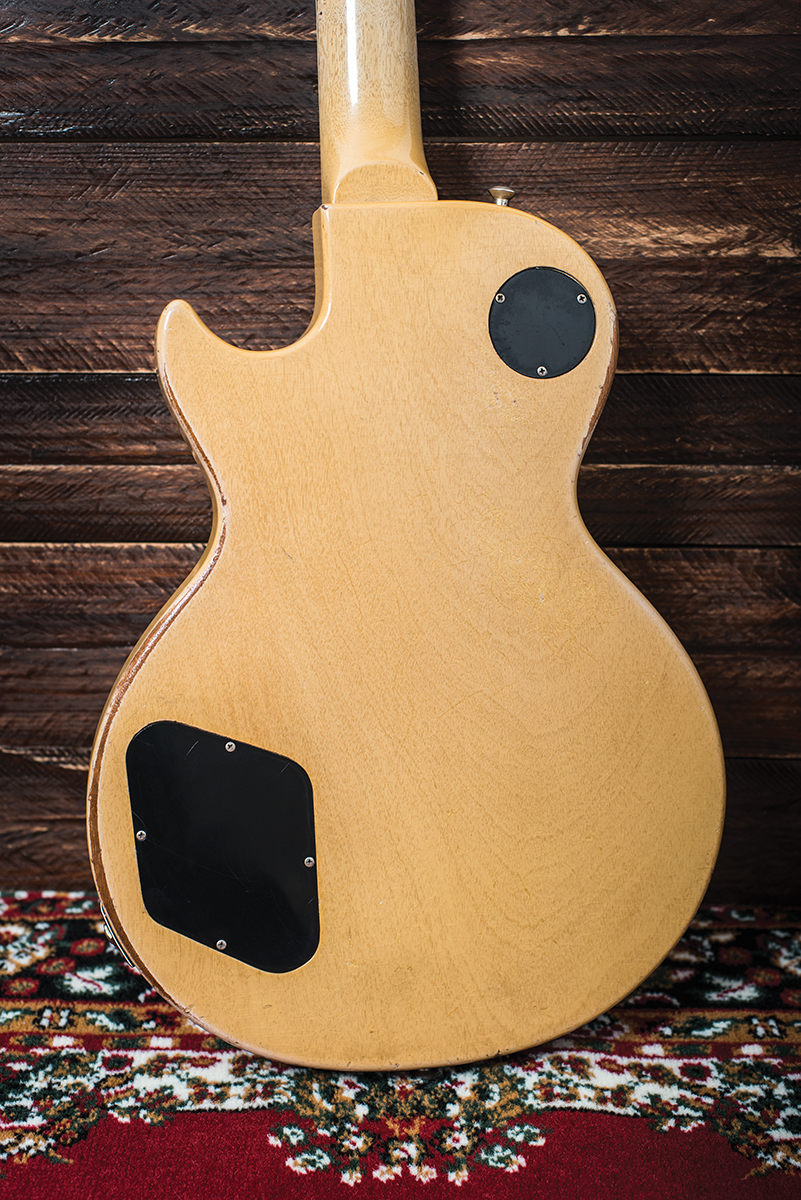 For instance, wrapover tailpieces were deemed perfectly good enough until 1955 and P-90s remained Gibson’s premium pickup until 1957. This Special has the same potentiometers and paper/oil bumblebee capacitors that were fitted in all the top-end Gibsons of the era and the neck is just some trapezoid markers and an inlaid logo away from being the same as a Les Paul Standard’s. 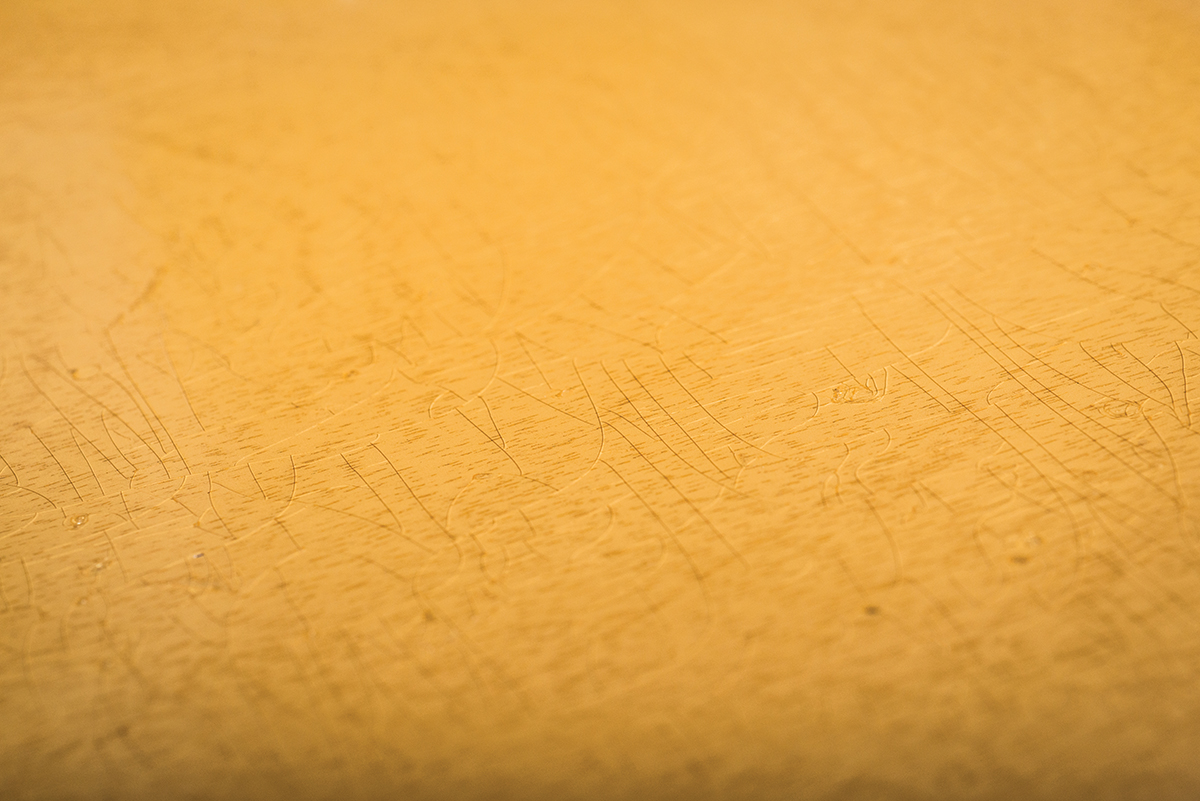 The full but fabulous feel is absolutely identical and it surely seems reasonable to say that ‘budget’ Gibsons of the mid-50s era were actually simplified, rather than compromised. 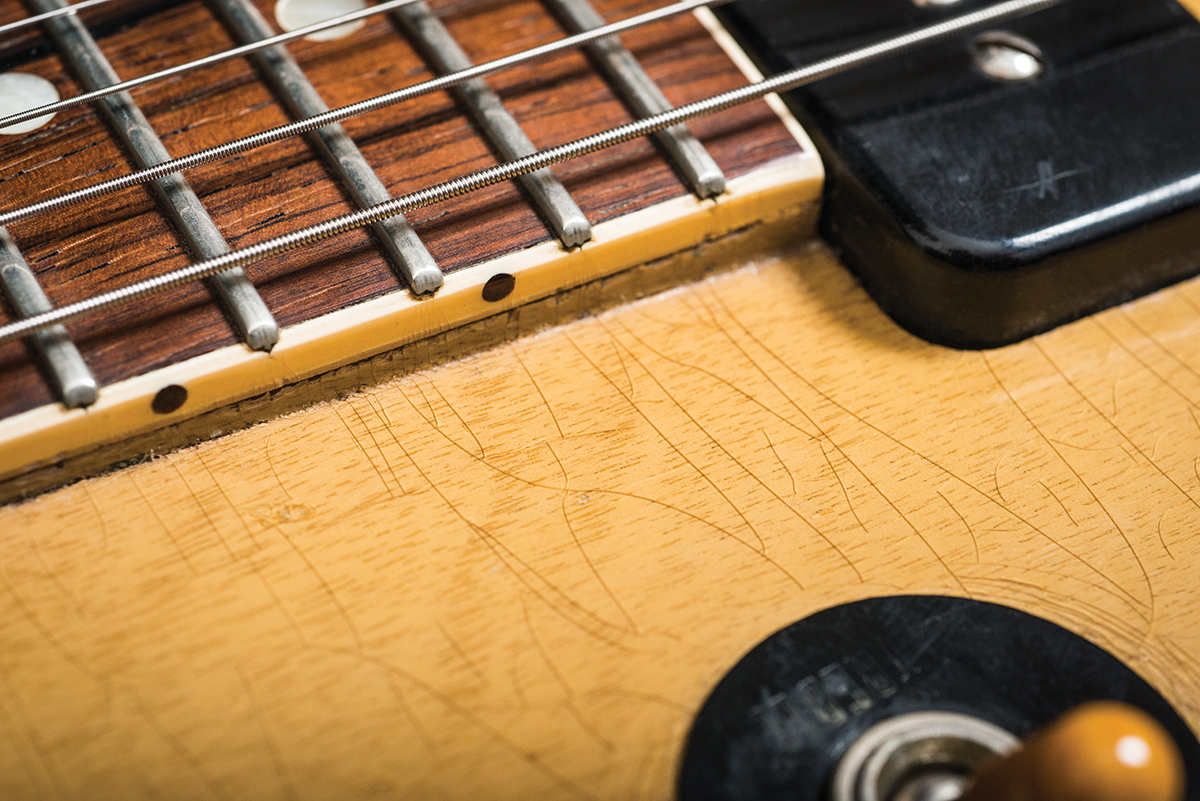 This Special was made in 1956 and it’s a well-played and well-preserved example that was recently shipped over from New York. The wheat-toned early TV finish has been rubbed away in the forearm area and the back of the neck, and there’s copious lacquer checking, with crazed cracking rather than the more uniform lateral lines which you’ll see on so many replicas. 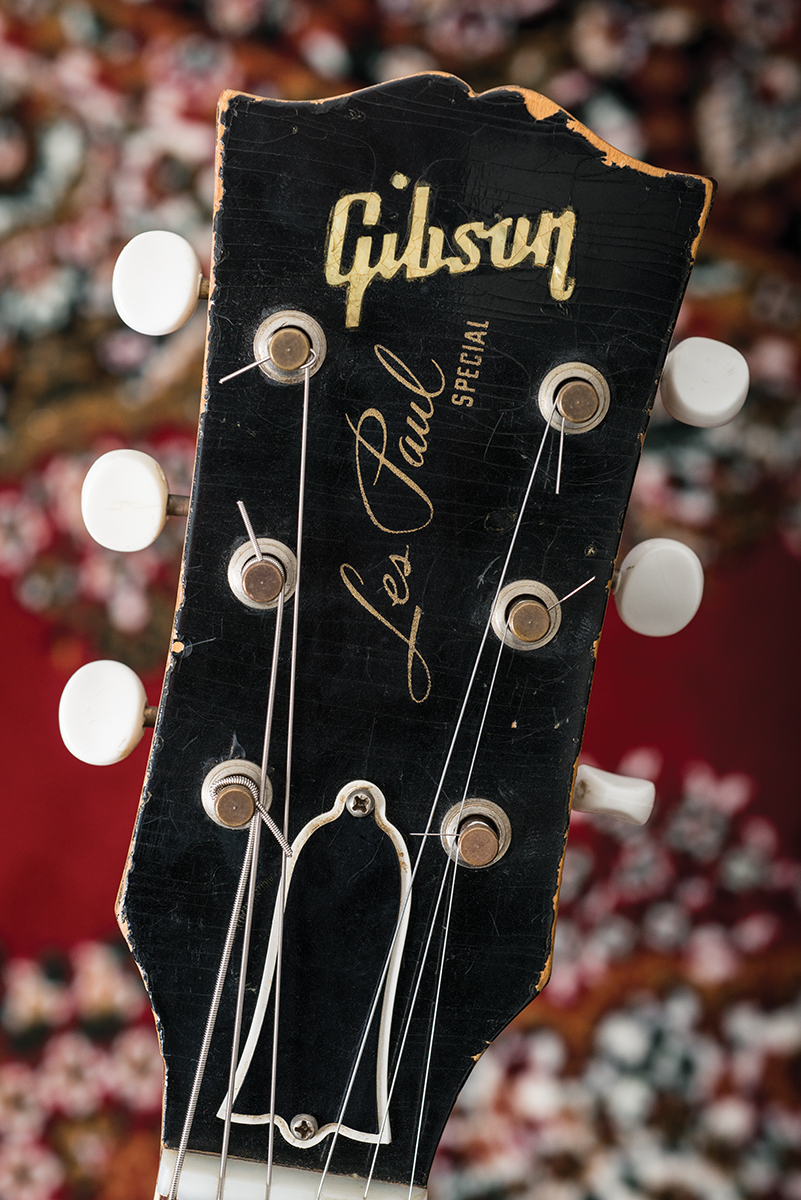 It’s a Special, not a Junior – and it says so on the headstock

The current owner has installed locking strap buttons and the only other non-original parts are the tuner buttons and a shim under the nylon nut. Inside the control cavity, all the solder joints look original and the wiring appears to be untouched since this guitar left the Gibson factory.

A headstock break was repaired back in 1974 and it can be seen to be stable, because no attempt was made to conceal the work. Under black light, everything looks exactly as an original example should.

The changed tuner buttons are among the few non-original features, but this is only really apparent under black light

TV Special in use

Everybody knows that Les Paul Juniors sound better than Specials, right? After all, there’s no neck pickup to compromise the integrity of the neck joint or suck the sustain out of the strings by exerting unnecessary magnetic pull. On the evidence of this guitar, that theory has about as much credence as the ‘resonance damping Goldtop finish’ hypothesis. 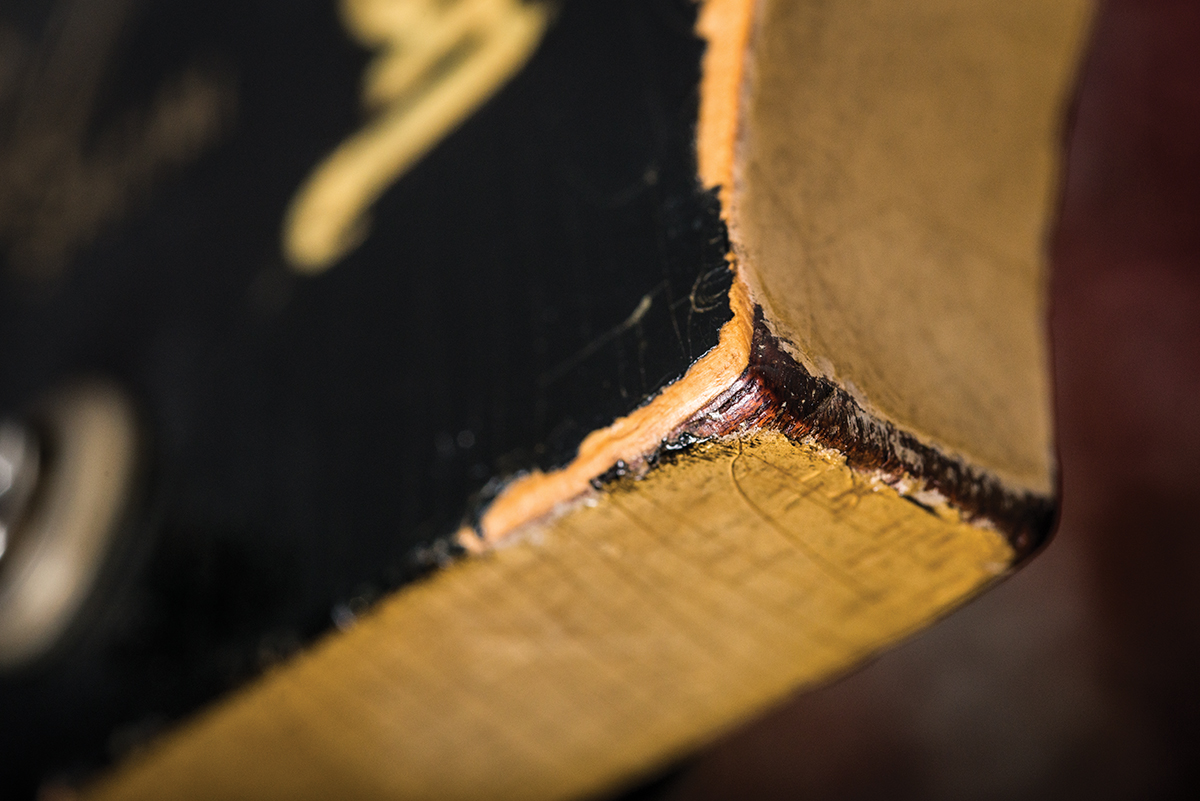 Thanks to the wear on the headstock corner, you can see the holly veneer over the mahogany

It probably helps that owner Neil Ivison is a professional guitar tech because, thanks to his efforts, the playability of this Special is just about perfect. A fine-quality refret has also been carried out, with wire that’s closer to late-50s Gibson spec than the skinnier stuff that would have been used circa 1956. Most would find it a practical and pragmatic upgrade for a player’s grade guitar. 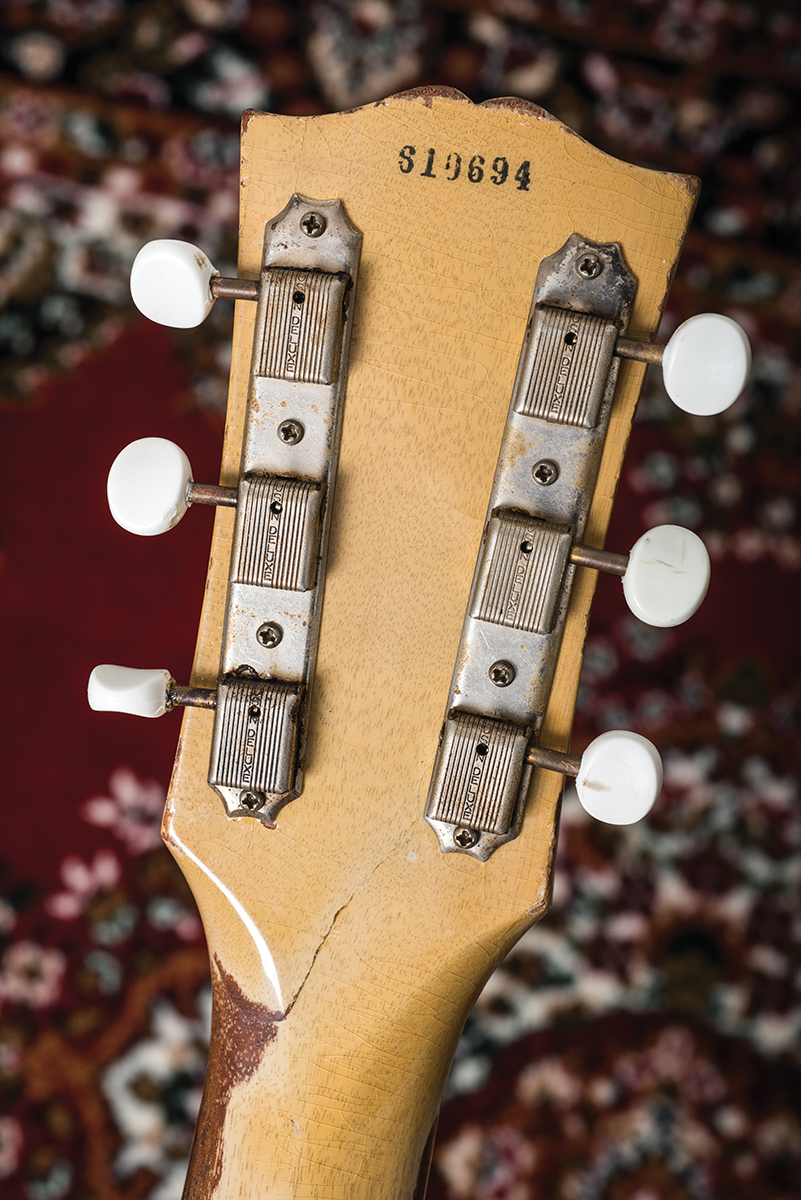 Solid and stable since 1974, no attempt has been made to conceal the headstock repair

Despite (or possibly because of) the absence of a Tune-o-matic bridge, this Special intonates astonishingly well and a super-slinky action combines with rock-solid stability. The played-in feel may be pure vintage, but you could gig this guitar with the realistic expectation of a trouble-free night. In fact, during the entire time I was testing it, this guitar barely needed to be retuned. 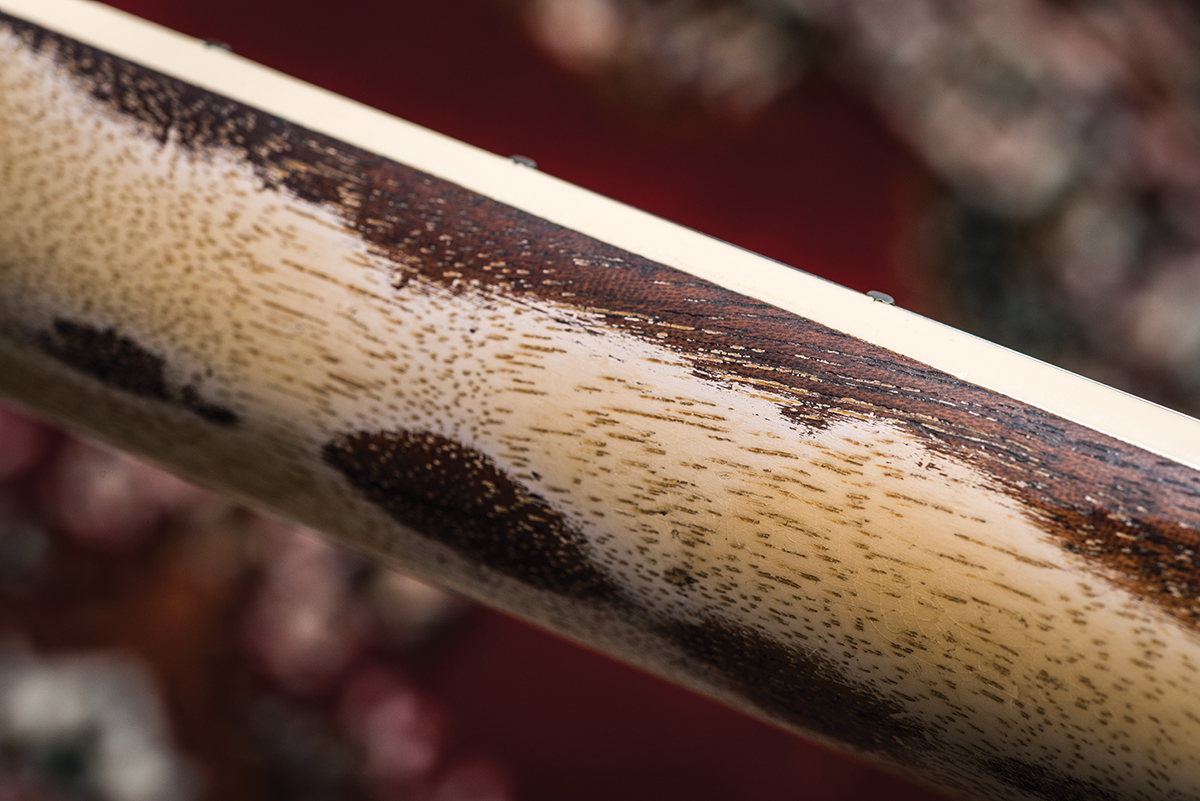 Even unplugged, the sound is huge and loud. The frequency response reaches points above and below the norm for an unplugged solidbody, so you’re treated to sparkle and thump.
Plugged in, the Special’s best feature is the full-on midrange and extraordinary note separation. When you strum through a chord, you can clearly discern every note as the tone see-saws between the upper and lower mids while it sustains. 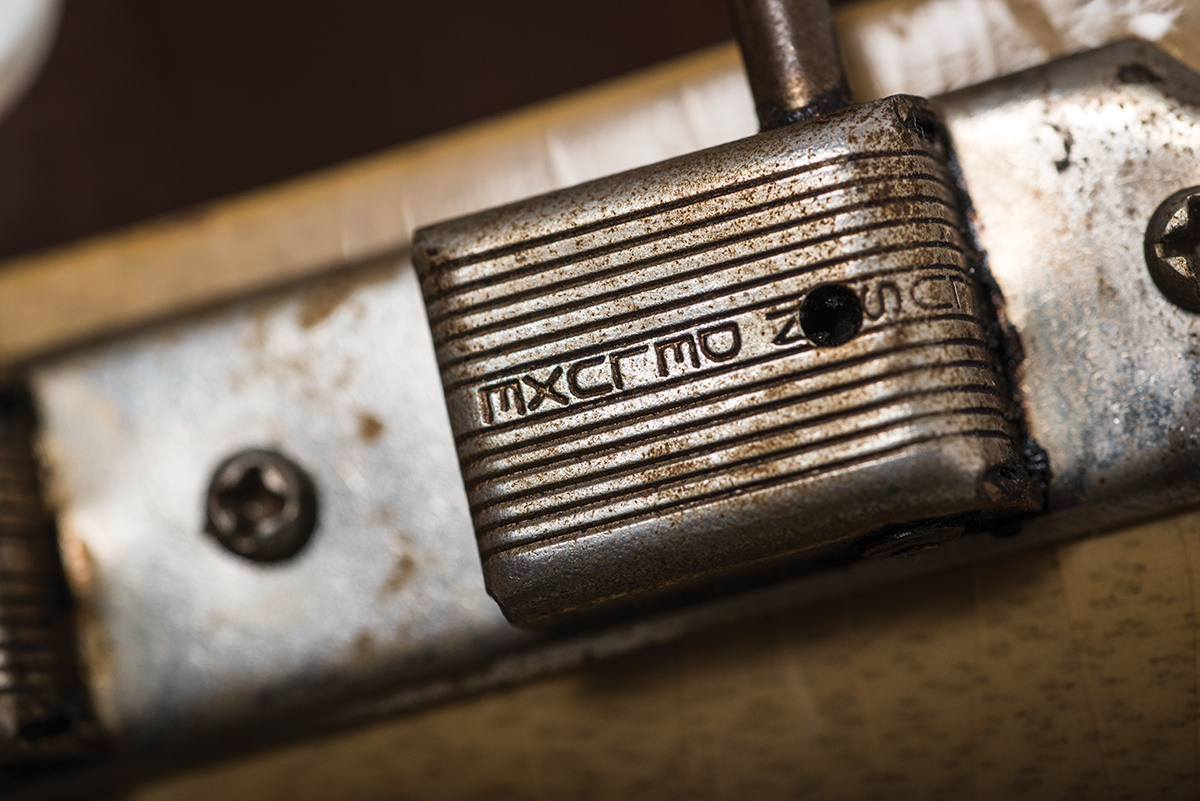 The two pickups sound supremely balanced, yet distinct. Both have enough ‘oomph’ to push a valve amp into a throaty overdrive, but the bass remains clear and the treble is never anything other than sweet. The bridge’s wiry bite when soloing high on the plain strings contrasts with the neck’s more flutey tone and rounded attack. Switch to chords and you get woody depth and horn-like honk from the neck, with snarly but still chiming rock tones and crisper attack from the bridge. 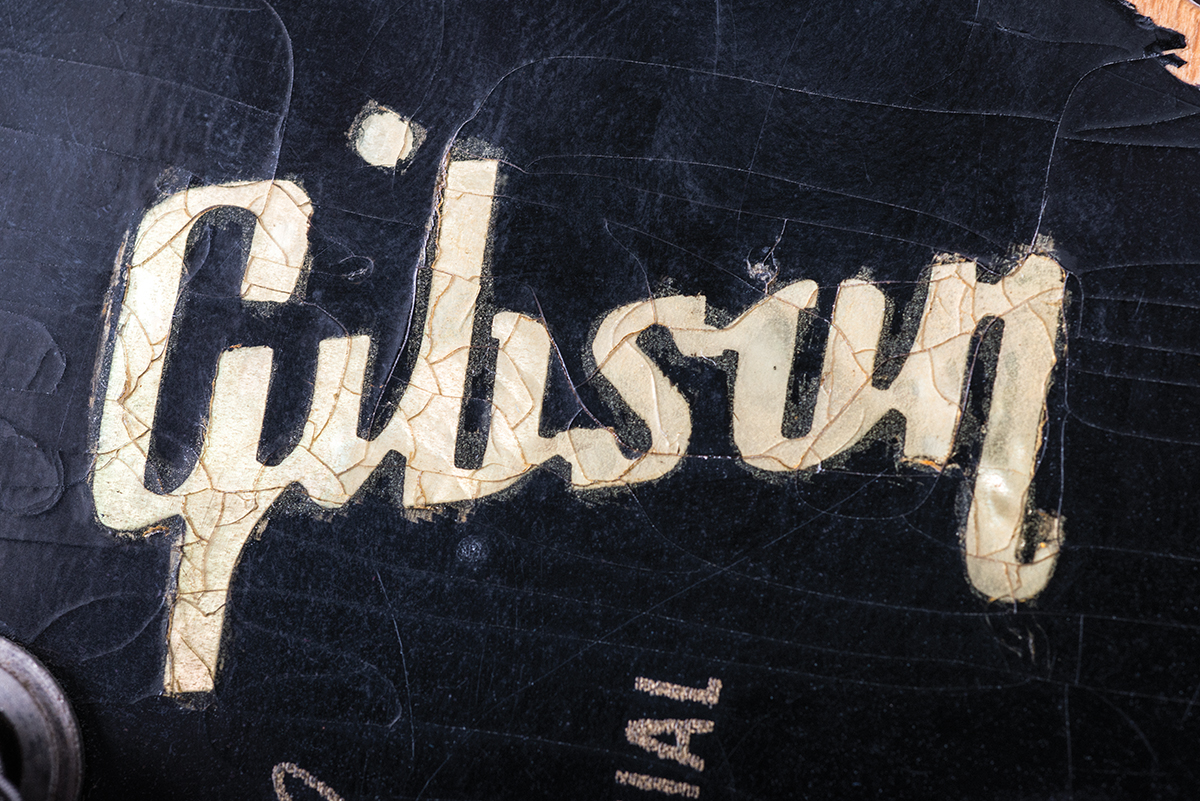 The middle setting is perhaps the pick of the bunch, and even greater than the sum of its parts. The midrange scoops out just a touch to emphasise the bridge’s ring and the neck’s warmth, with a hint of phasiness and a slightly compressed response.
This setting is absolutely perfect for ditching the pick and digging in with your fingers, or exploring the smorgasbord of sounds you can dial in using the controls. 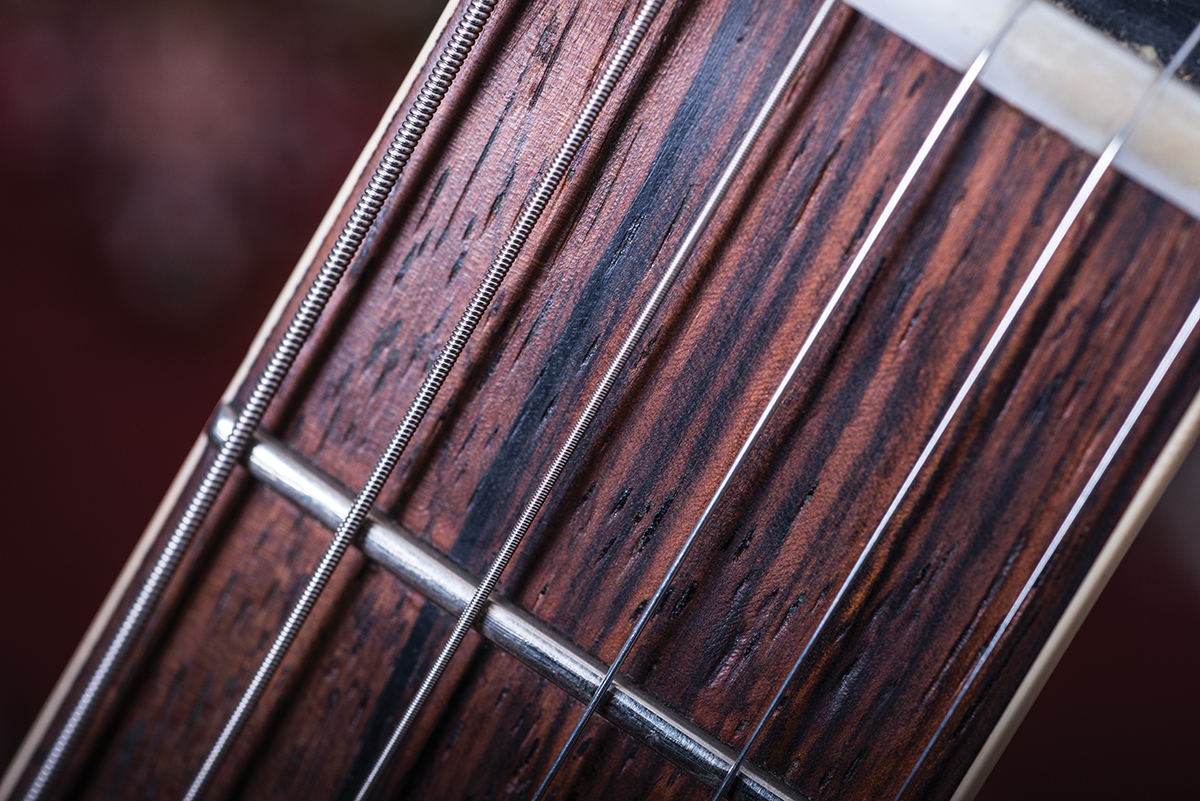 The Brazilian rosewood fingerboard is smooth and clean, with gorgeous colour and grain pattern

Like the best Juniors, this Special retains complete clarity when you turn down the volume controls, and it even manages to pull off the ‘pseudo acoustic guitar’ trick. You can also dial in an approximation of Clapton’s ‘woman’ tone, with overdrive and the tone control backed-off. 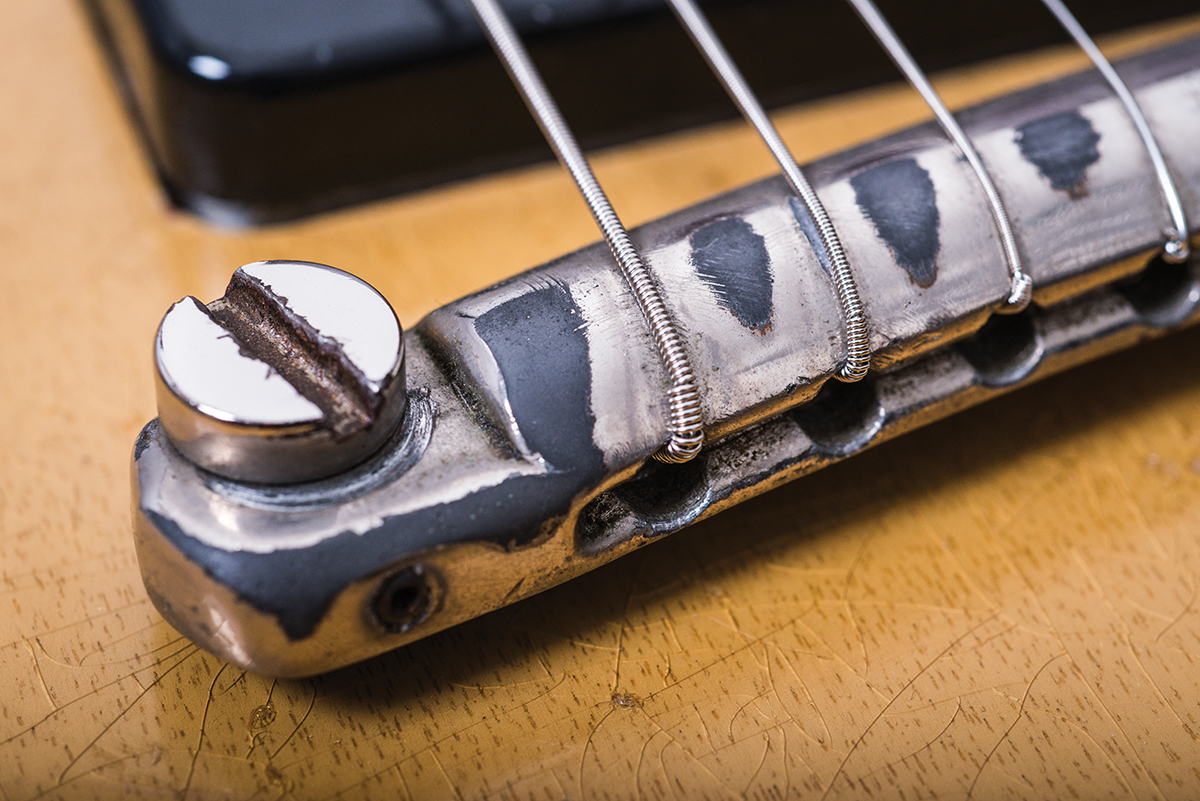 While testing out this guitar, I took the opportunity to compare the Special’s pickups with a variety of bespoke modern P-90s but you may be surprised to learn that the original units sound and respond most like our set of Monty’s PAF replicas. Like last year’s ’55/’57 Goldtop shootout, it’s a reminder that original PAFs were designed simply to buck hum rather than to be a huge sonic departure from P-90s. 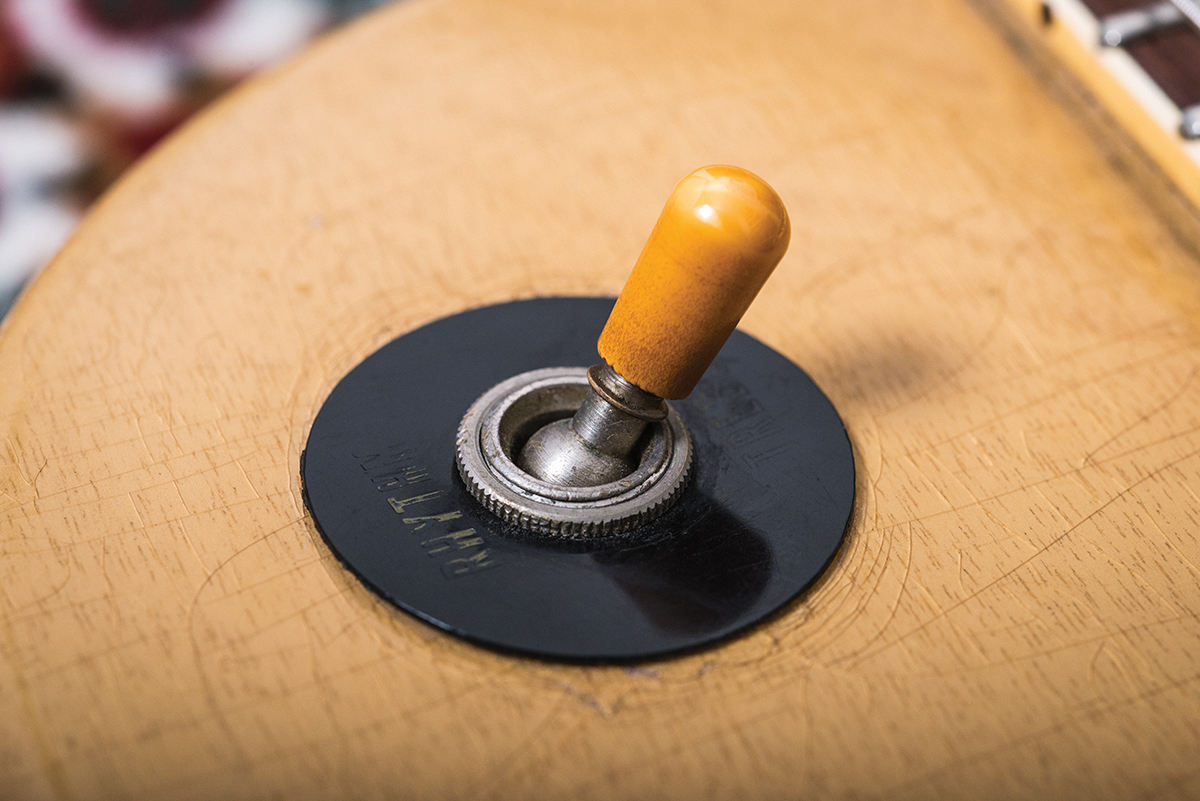 It’s great to see the original poker chip and switch tip are still on the guitar – even Tom Murphy would struggle to mimic this lacquer-checking!

I’ve had the pleasure of playing several vintage Juniors, but this was my first lengthy encounter with a 50s Special. Although I find the single- and double-cutaway Juniors have slightly more visual appeal, I’d choose to own a Special.

In fact, I wish I could own this Special – I can’t really imagine how one of these guitars could sound or play any better. And considering how much more a 50s Goldtop would cost, Specials are still relatively affordable. 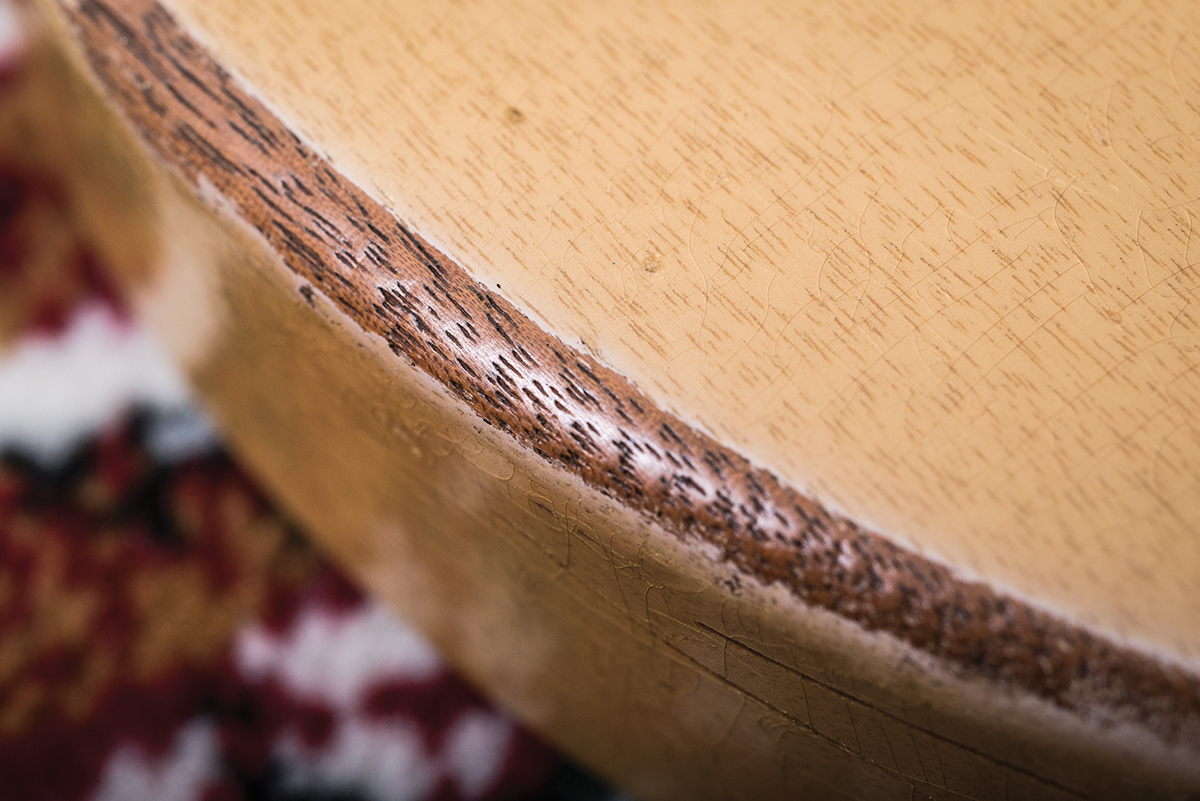 Arm-wear has rubbed through the finish to reveal the mahogany

A Special can do the Junior thing, but a Junior can only do part of the Special thing – precisely one third of it, in fact. Granted, you can get a lot of fantastic tones from a Junior through judicious use of the controls, but there’s a world of difference between a bridge P-90 with its tone control rolled back and a proper neck pickup. 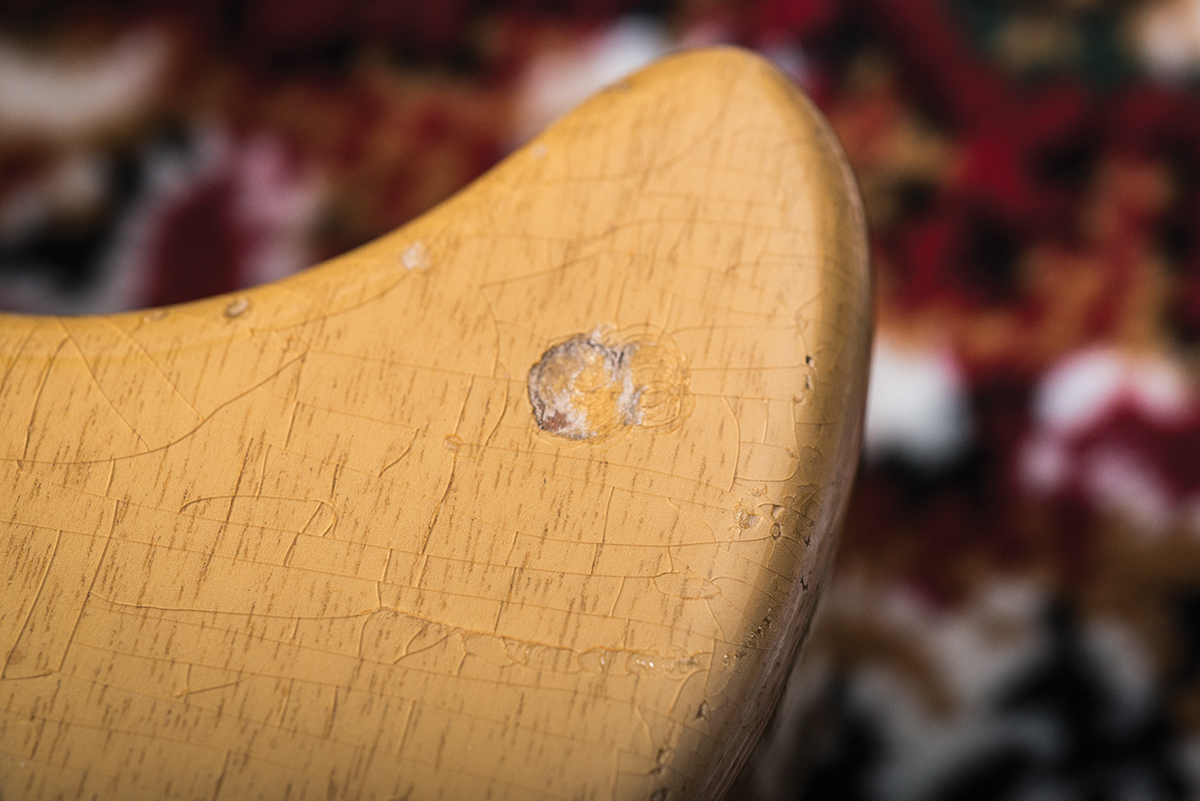 I’ve finally found a cure for the Junior GAS that’s been troubling me, but unfortunately, lusting after a single-cut Special feels even worse.