With its spectacular faded flametop and double-cream pickups, this 1959 Les Paul is a fire-breathing rock monster with a storied past. Time to meet the Richrath Burst. 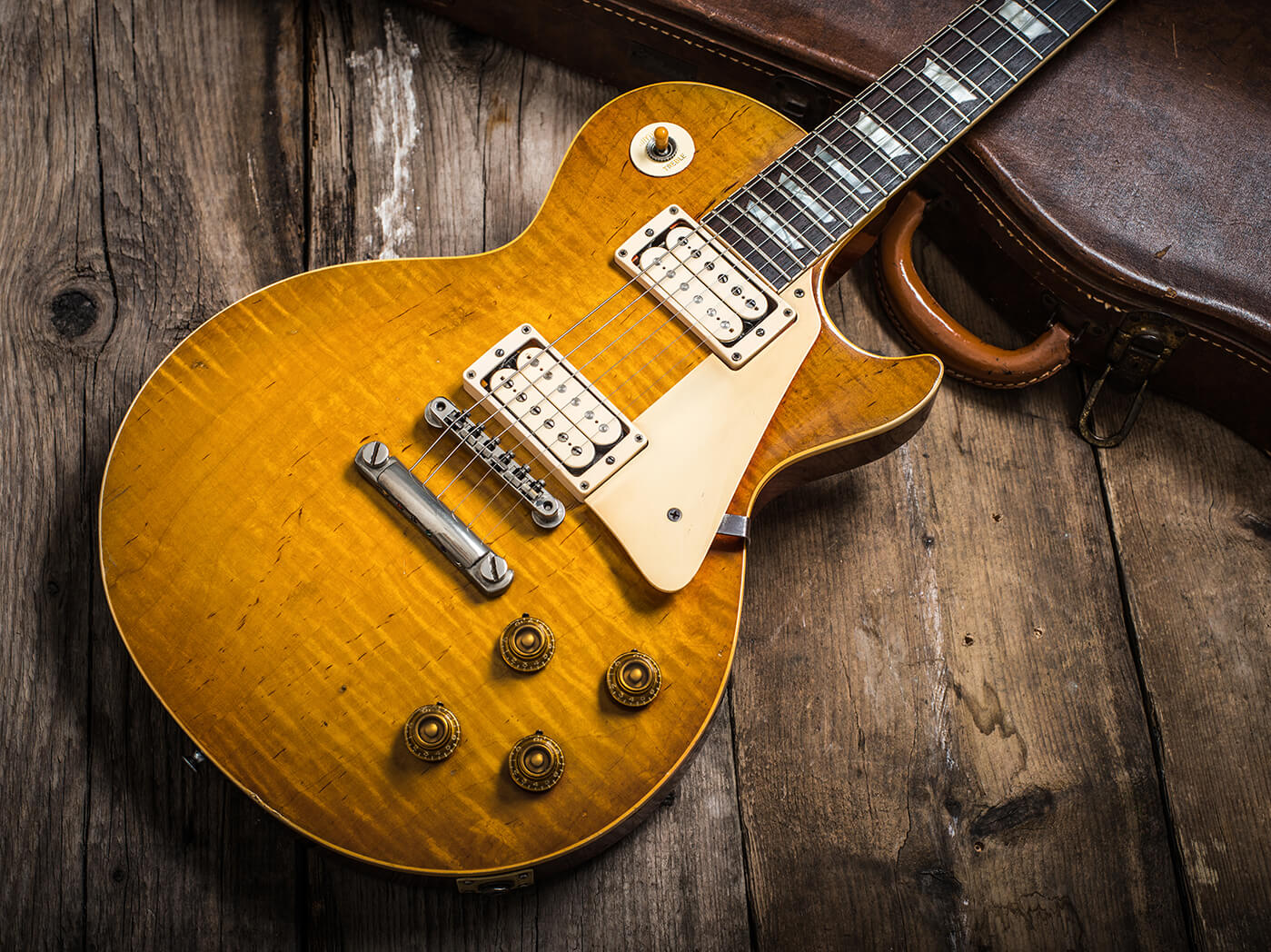 In the world of vintage guitar collecting, provenance is of huge importance. And when it comes to vintage Les Pauls, the stakes are very high indeed. Happily, this is one ’59 that comes with its history well documented and a former celebrity owner.

Currently for sale via Lucky Fret Music Co in London’s Shoreditch neighbourhood, the Richrath Burst (serial number 9 0614) is named after its former owner, REO Speedwagon’s Gary Richrath. In 2018, it was played on stage at Cardiff’s Motorpoint Arena by Joe Bonamassa.

Richrath – REO Speedwagon’s lead guitarist, songwriter and occasional singer between 1970 and 1989 – was a Burst collector. Although there are no known photographs of him playing this guitar, it was acquired by well-known guitar dealer Jacques Mazzoleni in around 1989. The instrument had been in the possession of Richrath’s ex-girlfriend and Mazzoleni’s partner was a friend.

From there, it went to another vintage dealer, Richie Friedman and then to noted collector Kosta Kovachev. The Richrath was traded to yet another dealer, Gil Southworth, before returning to Mazzoleni in 1998.

It wasn’t long before the Richrath Burst made its way to its current owner, who has been in possession of the instrument for 21 years. The guitar also appears in several of Vic DaPra’s books beloved of Les Paul enthusiasts including Burst Believers II and III.

Although the guitar is largely original, close inspection reveals there are a few issues to consider. Although Klusons are the only machineheads ever to have been fitted, one of the tuners doesn’t match the others and removing the replacement unit reveals a ‘PAT APPLD’ stamp on the underside, meaning that it was manufactured between 1953-56.

Photographs from 1994 show the Richrath Burst with covered pickups. Although the current, uncovered set comprises a pair of genuine PAFs, they aren’t original to the guitar.

Swapped pickups might be a concern to some, but the fact that they are highly sought-after units with white bobbins may mitigate this somewhat, along with the pair of original covers stashed inside the case.

Besides the pickup connections on the volume pots, all other solder joints appear untouched. The pots are original, and the ‘bumblebee’ capacitors are the earlier paper-in-oil types.

Visual evidence suggests this guitar was played a lot and the neck finish was duly worn through to the wood in patches. Maybe a previous owner didn’t appreciate the played-in feel, so fresh lacquer was blown over the surviving finish.

Although this gives the neck the glossy feel of a much newer instrument, the wear pattern is still visible. Aside from the worn corner of the body, adjacent to the cutaway, the back was left untouched and the finish on the top is completely original.

Like many Bursts, the Richrath’s fingerboard has been levelled during a recent refret. It’s quite easy to see because the fingerboard binding height tapers downwards towards the body and the tops of some side dots edge into the rollover.

According to the luthier who carried out the refret, levelling the ’board was unavoidable – someone had attempted to repair fingerboard wear divots with filler and there was also a very slight twist. There certainly isn’t now: there are no playability issues whatsoever.

It also helps that string pressure hasn’t caused the original wireless ABR-1 bridge to sag noticeably. There’s a slight curve, but the string radius remains good and the strings are always where your pick or fingers expect them to be – unlike some vintage Gibsons. 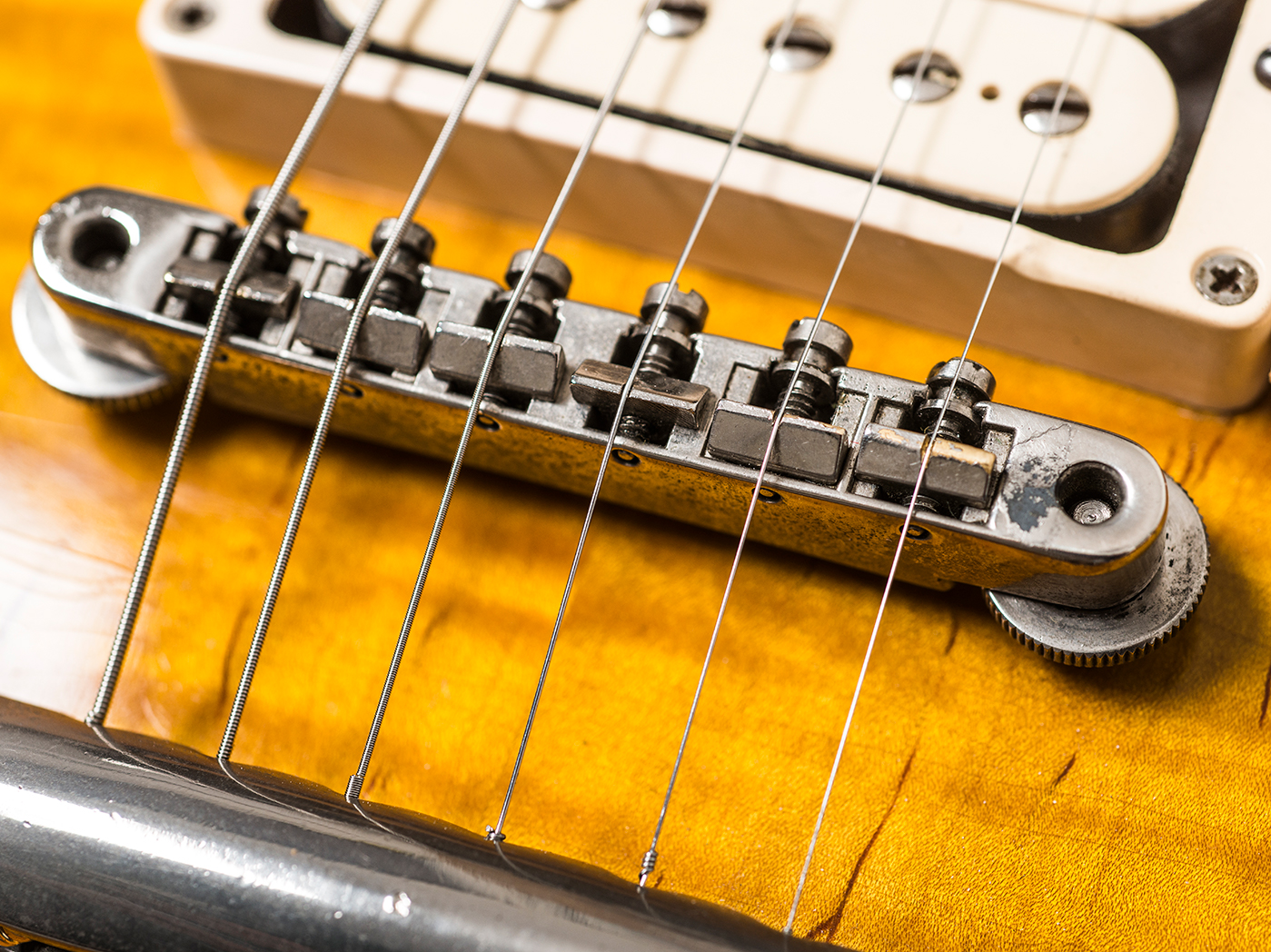 We suspect the Richrath has seen more sunshine than smoky bars, because although it’s unblemished, the top has almost faded into an ‘unburst’. There’s still a hint of extra darkness around the edges of the deep amber lacquer, though and the vivid original cherry red survives as a pickguard-shaped shadow.

The retreated sunburst reveals even more of the outrageous flame and mineral streaks in the bookmatched maple. It has an almost holographic appearance, and when the light hits it at the right angle, the effect is breathtaking.

Having played numerous sunburst Les Pauls from the golden era, we’ve learned that the reality can differ from the widely held fantasy. Some fondly imagine that 1950s Bursts exemplify the raw power, endless sustain and sheer grit of the ultimate rock guitar. Not all Bursts are created equal, but the Richrath ticks those boxes better than most.

It’s certainly on the heavier end of the late-50s spectrum, although it’s relatively lightweight compared to some P-90 Goldtops and 1970s Customs and we suspect that has a bearing on this guitar’s dynamics. Uncovered double-white PAFs are a first for this writer, and they present an opportunity to assess the often-debated issue of uncovered humbuckers sounding louder and brighter than those with covers intact.

We are able to use the Richrath on some studio recordings and discover it has an extraordinary ability to sit in a track. Without excessive brightness or edginess, the subtleties of its tone cut straight through and there’s an evenness to the dynamic response that keeps the Richrath right at the front of a mix. 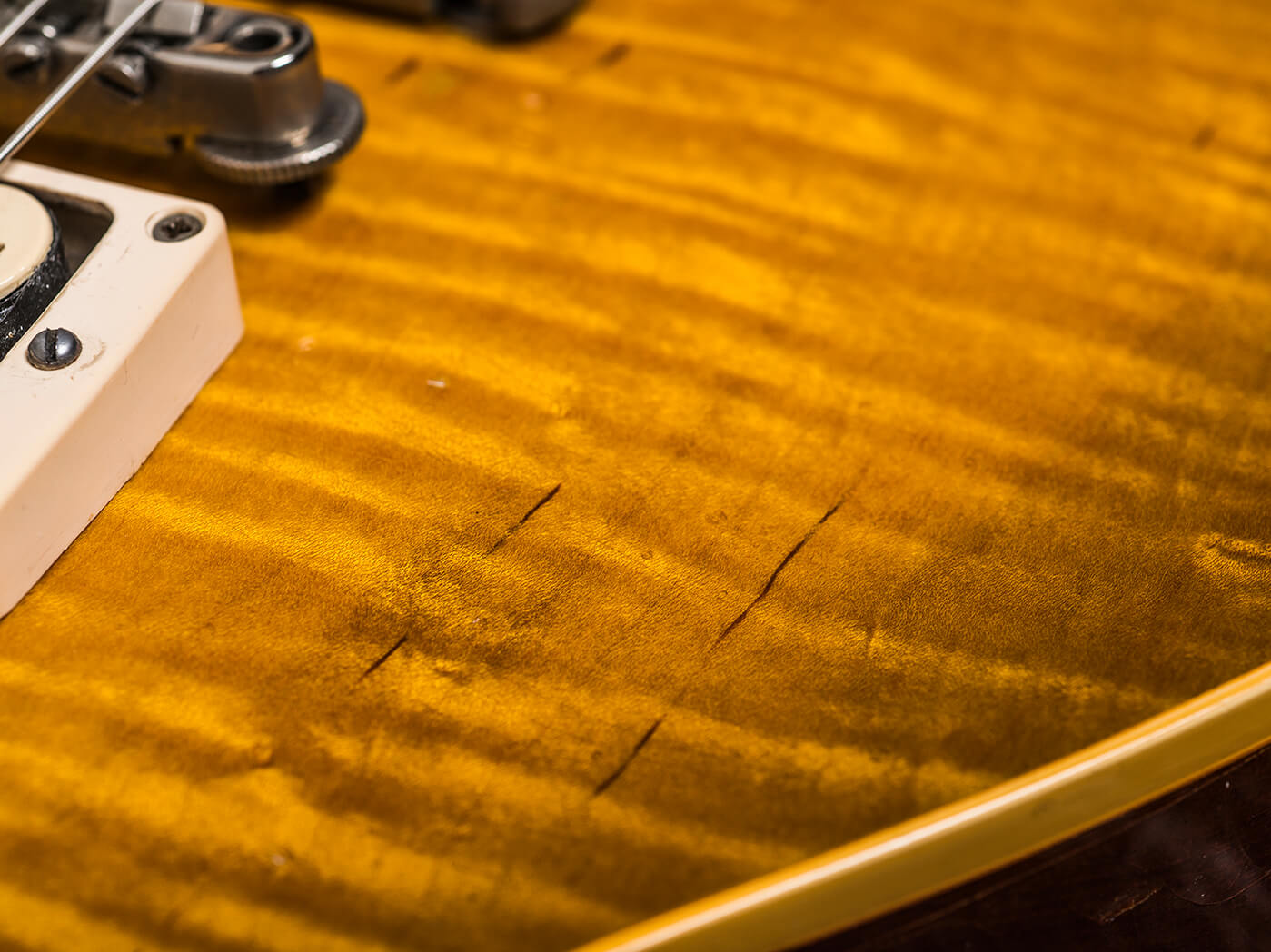 At the same time, an explosive blast of harmonic overtones characterises the attack, along with massively solid single notes and an overall density that makes individual chords sound like they’re double-tracked. It doesn’t take long to determine that this is an out-and-out rock Burst, with exceptional cutting power, otherworldly sustain and sheer balls.

Given its stellar rockin’ abilities, the Richrath’s clean tones come as a bit of a surprise. These are not especially bright-sounding PAFs and there’s nothing to suggest that the cover removal has enhanced the upper mids or extended the treble. But they do sound more powerful than the DC readings alone might suggest – 7.96K (neck) and 8.74K (bridge).

Both pickups are very clear and we encounter a fluid mellowness in the neck position that’s pleasingly devoid of any wooliness in the low end. The bridge position sounds slightly less open and transparent, but compensates with a chewy midrange bark and a hint of cocked-wah resonance. That said, all the controls operate exactly as we would expect on a 1950s Gibson, so the tonal range and clean-up abilities are exceptional.

Some describe 50s Bursts as being like Telecasters on steroids, partly because they can be so snappy and airy. That broadly tallies with our Burst experience thus far, but less so with the Richrath, because it couldn’t be mistaken for anything other than a Les Paul. 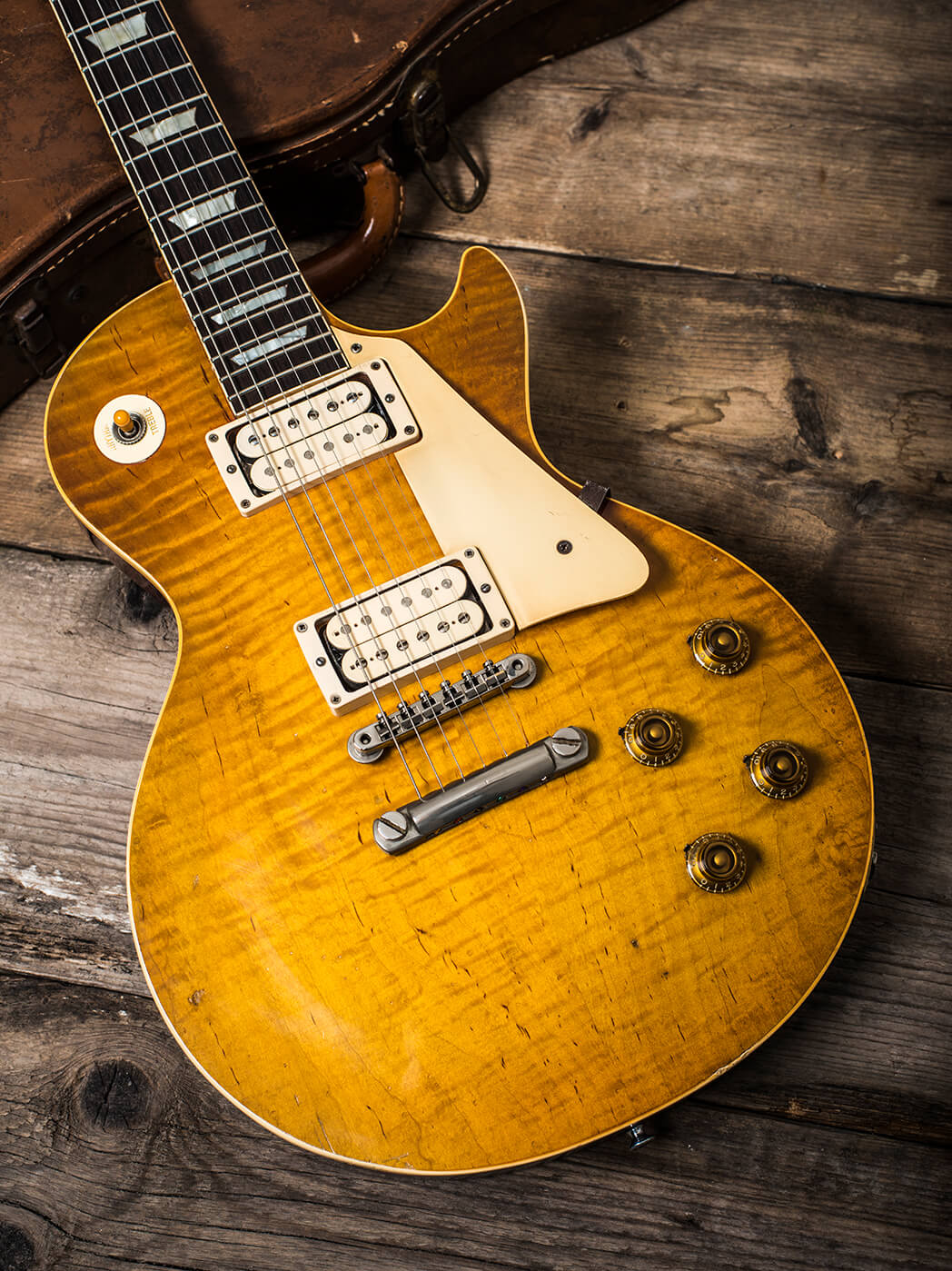 Despite its rocking attributes, the Richrath is not such a wild ride as the Duggie Lock Burst, which Lucky Fret sold shortly before we featured it in early 2018. That guitar seems to have a mind of its own that obliges players to either wrestle back control or hang on for the ride. In contrast, the Richrath has a milder manner and is easier to play, but by no means lacks sonic intrigue.

It’s claimed that some sunburst Les Pauls aren’t that special, and no doubt some are better than others, but we have yet to play an original Burst that truly disappoints. They are all unique, to some extent, but although the Richrath is by far the most rock-oriented Burst we’ve tested, it more than holds its own against the rest of them.