If you’ve ever wondered whether vintage tone is in the wood or the pickups, this pair of custom-colour pre-CBS Fender Stratocasters may help settle the issue. 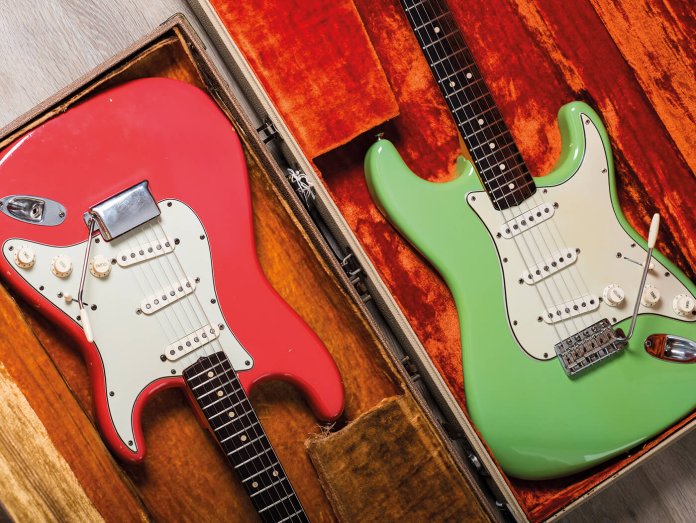 It’s always a treat to get our hands on a vintage Stratocaster, but here we’re really being spoiled. Both of these guitars are very special for entirely different reasons; one was owned and played by the golden-eared Eric Johnson and the other possesses a combination of features that may make it the only example of its kind produced by Fender during the pre-CBS era. 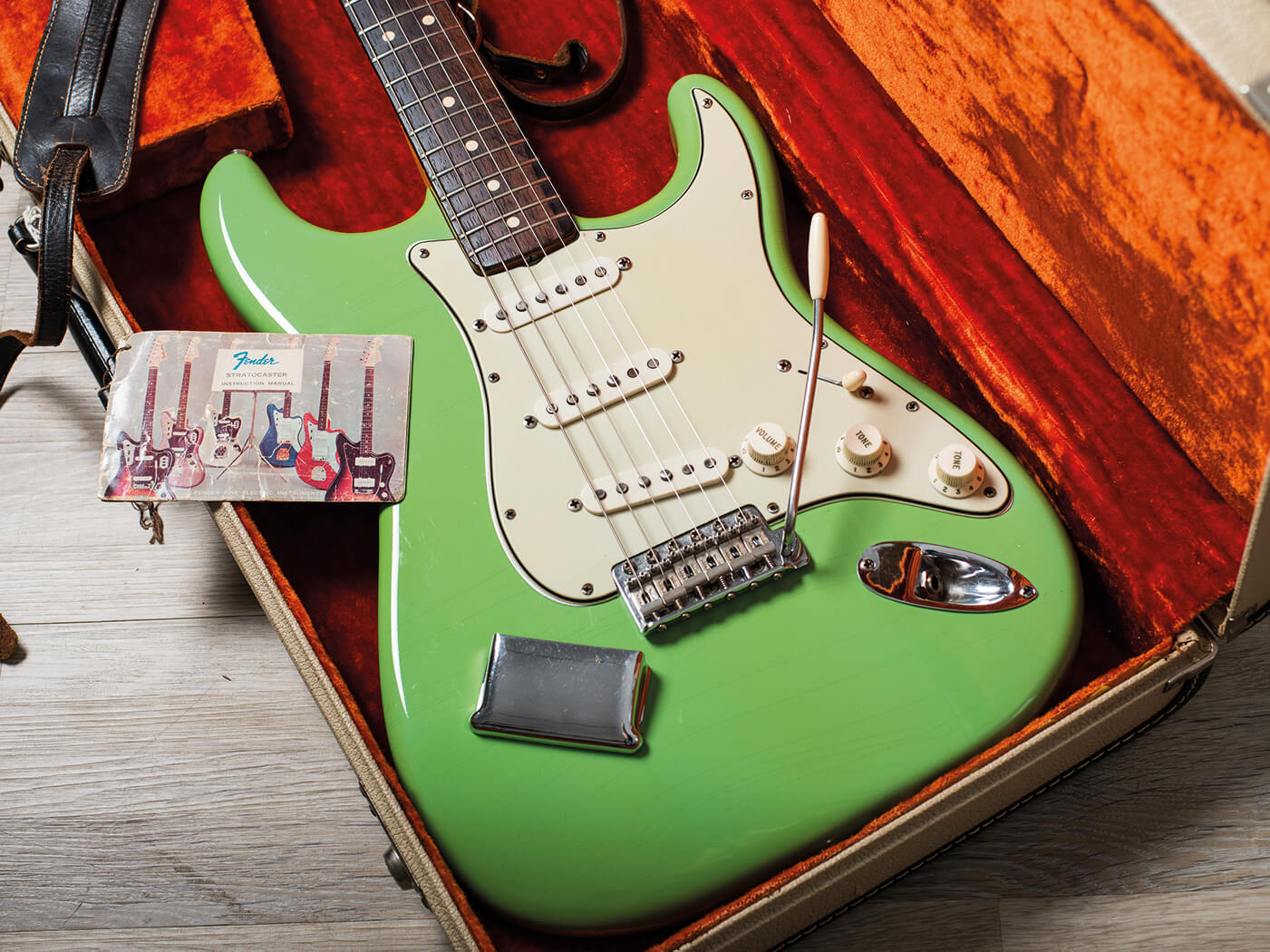 Gibson Les Paul Standards from the late 1950s are rare guitars. Flying Vs and Explorers are rarer still, and Modernes are so rare that some question whether ever existed at all. In contrast, Stratocasters from Fender’s golden era are seldom associated with rarity because they were made in such huge numbers – after all, ease of mass-production was kind of the point, and the genius of the instrument’s design.

Gibsons were made by hand, using painstaking traditional methods and the factory produced a very extensive range of models. Stratocasters are essentially flat pack guitars and Fender produced relatively few models, so what would make this 1963 example not only rare, but potentially the rarest of all vintage Stratocasters?

The most obvious answer is that it’s finished in Surf Green, which is a seldom-seen custom colour. But more thrillingly, the body appears to be korina – or African limba, if you prefer. It was only after its current custodian ATB Guitars acquired the guitar and removed the neck that the discovery was made.

By 1963, Fender had begun using ‘paint sticks’ when bodies were being sprayed. Always attached on the bass side of the neck pocket, they allowed the person spraying the guitar to hold the body and alter the angle, and then hang the body up while the lacquer dried.

Removing the paint stick would reveal a large area of bare wood inside the neck pocket and it’s helpful if you’re trying to determine whether the body is ash or alder – the two wood types commonly used for Stratocaster bodies back in the day.

There are, however, rare exceptions. The most well known are mahogany bodies, and examples do pop up over a fairly wide early-1960s date range. Less well documented are the korina-bodied Strats, and documented examples all originate from a fairly narrow time window that spans the end of 1963 and very early 1964. In other words, the start of the L-Series.

Why Fender briefly used korina is anybody’s guess. The switch from ash to alder was made to speed up the finishing process, and since korina is open pored like ash, it would have been a backwards step.

It could be that some korina was delivered by accident and Fender didn’t want to waste it, or there was a temporary shortage of alder at Fender’s timber suppliers. It could also be because korina turns yellow amber under clear lacquer, and that would have obviated the staining process needed for sunbursts, but it seems likely we’ll never know.

ATB’s korina Strat is noticeably light in weight when you pick it up and it’s in such pristine condition, you get the odd sensation that it’s a recently manufactured guitar. A clear indication to the contrary is the way that the mint-hued but mint-condition pickguard has shrunk back very slightly, exposing the aluminium shield beneath and pulling the pickguard screws inwards.

Although the neck lacquer retains its pale, factory fresh appearance, and there are no signs of playwear or checking, the metallic paint in the decal has begun to oxidise and acquire that vintage greenish tint. It’s interesting to note that nobody has ever attempted to tweak the neck relief without first detaching the neck to expose the truss-rod screw. As a result, the area of wood and green lacquer immediately in front of the truss-rod remain in perfect condition. 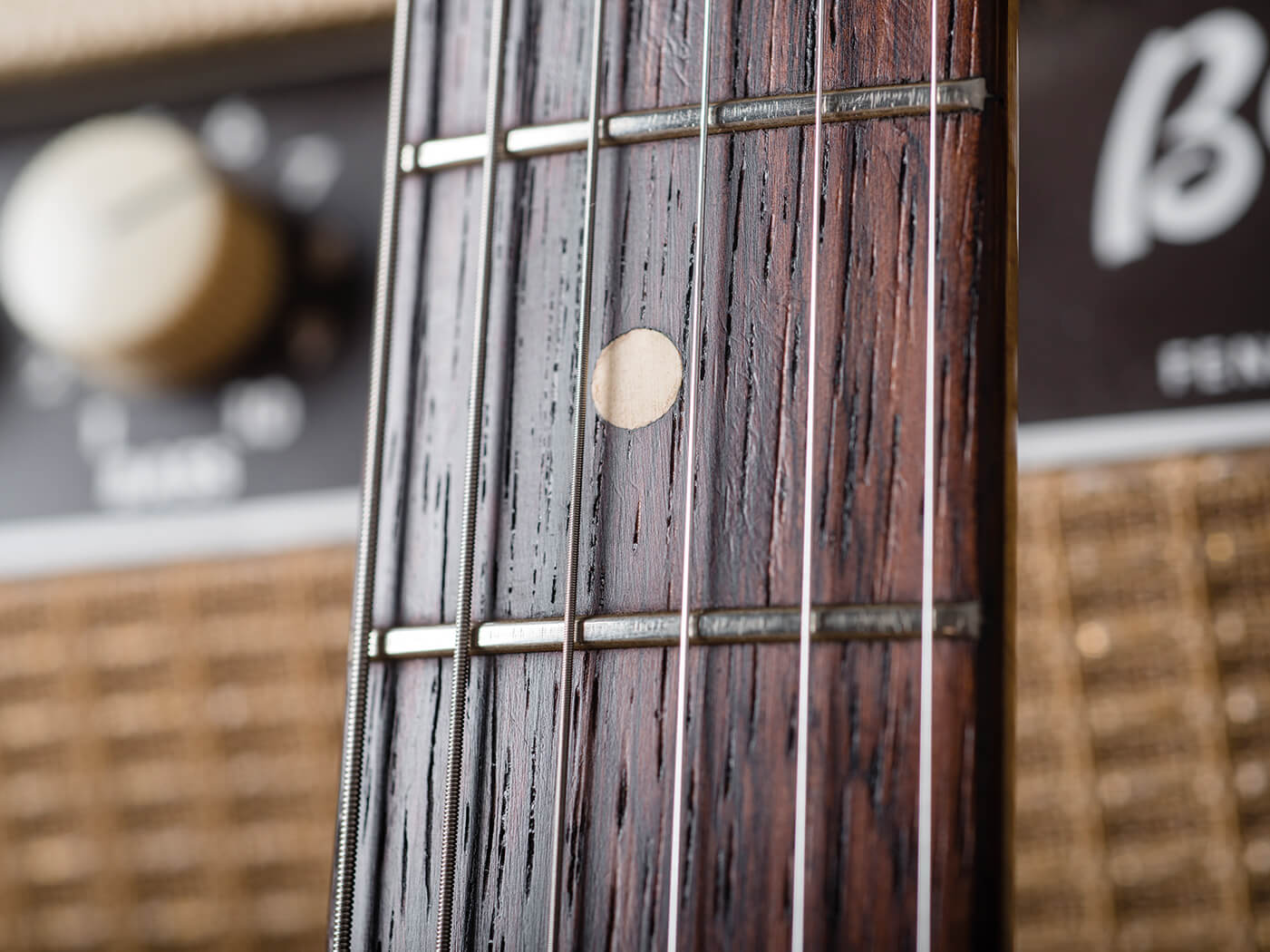 Fender used some lovely Brazilian rosewood for slab and veneer ‘boards but if you appreciate wood figuring, this is a particularly fine example. It varies in shade from dark chocolate brown to near ebony black, with vivid grain patterns in some areas. Beside a few deposits of grime in the control pot mouldings, there’s scant evidence that this guitar was ever played. The bridge and saddles are essentially factory fresh and there is not even a hint of corrosion on the vibrato block.

The colour of the body is somewhat unusual and it differs somewhat from what we’re used to seeing on more modern ‘Surf Green’ guitars – including Custom Shop Relics. No doubt a darkening of the clear coats has caused this change because under the pickguard and spring cover we can see what Surf Green must have looked like when it was freshly applied. Although we cannot state categorically that it’s an original factory finish, with its paint-free screw holes and very natural lacquer checking, we see nothing to indicate that it isn’t.

Having access to a ‘closet classic’ in extremis also reveals other interesting details. The frets are undoubtedly original and almost unplayed. Consequently, we can see that Fender levelled frets but didn’t bother crowning them. Faint file marks are clearly visible and every fret is more or less flat across its entire width.

There is a question mark over the saddles because the tooling marks that are usually evident on the flat area at the back – on all but the rustiest examples – are missing. They are also quite shiny and the lettering stamps look a bit shallower than usual.

Since the saddles can corrode and tarnish far sooner than the automotive-quality chrome plating Fender used on bridge and jack plates, it’s possible that a previous owner decided to have the saddles re-plated to keep their appearance on a par with the rest of the guitar. 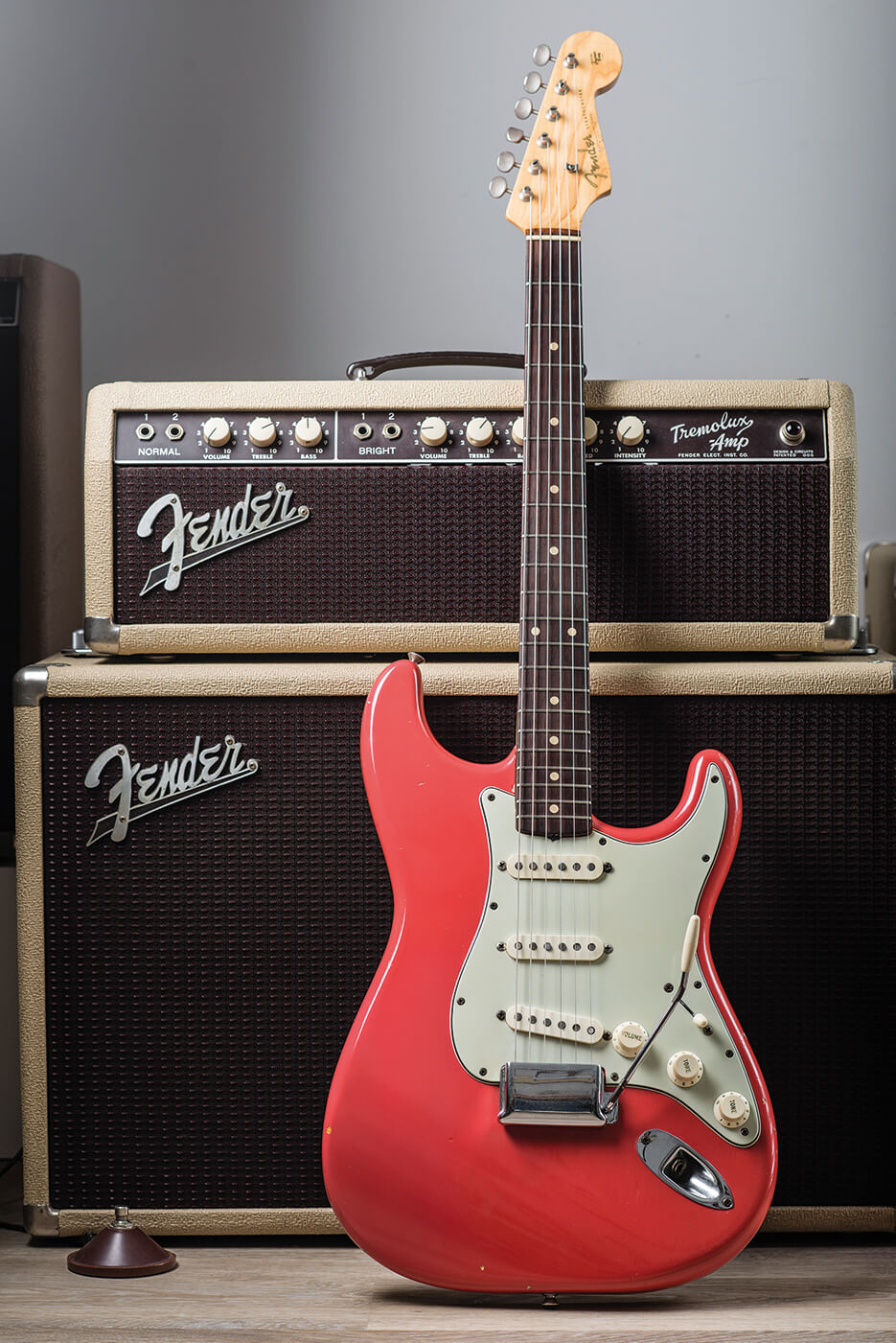 Clearly any Strat Eric Johnson considered good enough to play live and use for recording is going to be a stellar example. This Fiesta Red model from 1961 comes in its original candy-loaded brown Tolex case, along with a picture of Eric playing the guitar and a handwritten letter that confirms that not only did the star own and use it extensively on stage and in the studio, it’s one of the “two favourite rosewood neck Strats” he’s ever owned. High praise indeed.

Looking at this well-preserved example, it’s easy to see why Fiesta Red was often erroneously referred to as ‘salmon pink’ back in the day. It looks nothing like the anaemic farmed fish, but surprisingly close to the wild Alaskan variety.

This Fiesta Red is blown over Dakota Red, which is sprayed over a Desert Sand base coat. Where the lacquer has chipped or rubbed away, you can see the yellow-stained alder beneath. Remember, this is the era before Fender began using Fullerplast.

By any standards, the finish is in great shape for a 1961 Strat, but it’s obvious that this guitar has been well used in addition to being well loved. The front is in better shape cosmetically than the back, which has some odd but not unattractive spiral-shaped marks. They may be dents, or areas where something hot melted the finish.

The pickup covers and knobs are in fantastic condition, having turned very slightly creamy and developed verdigris in the lettering. The pickguard is perfect too, retaining a lighter shade that’s more mint than pistachio.

The slab ’board is unquestionably Brazilian rosewood and it’s in amazing condition, having been levelled when the guitar was refretted. We can’t say if the refret was done during Eric Johnson’s custodianship, but the work was clearly performed by a first-rate luthier.

The fretwork is faultless – so good, in fact, that the perfectly smooth and flat fingerboard is the only real giveaway that any work has been done. Fretwire of a vintage sympathetic gauge was used and there’s no evidence of sanding along the edges of the ’board or repaired chips on the top. All hardware appears correct, including the tooling marks at the rear of the saddles, and the single-line Kluson tuners. The screws in and around the pickguard are rusty, to a greater or lesser extent, but it’s all part of the vibe.

A couple of modifications have been made to the wiring and components. Eric Johnson is known to prefer having the middle-pickup tone control shifted to the bridge pickup, and that easily reversed modification is still in place. Unusually, the original three-way pickup selector has been modified to operate as a five-way switch – making the in-between positions easier to find.

Fender made a lot of Fiesta Red Strats in the pre-CBS era, so this guitar’s most distinguishing feature is the grain on the neck. The maple has very strong and clear lines that run across the headstock face and along the back of the neck. It also appears closer to flat sawn than quarter sawn.

We begin by comparing the overall feel of both guitars. The Fiesta Red 1961 model has a fairly standard weight for an alder-bodied, early-60s Strat, but you don’t need weighing scales to discern that the korina instrument is lighter. There’s little to choose between the necks; the Surf Green guitar has a slightly rounder depth, while the Fiesta Red has more of a classic 1960s feel, starting out skinny and gradually filling out towards the body. 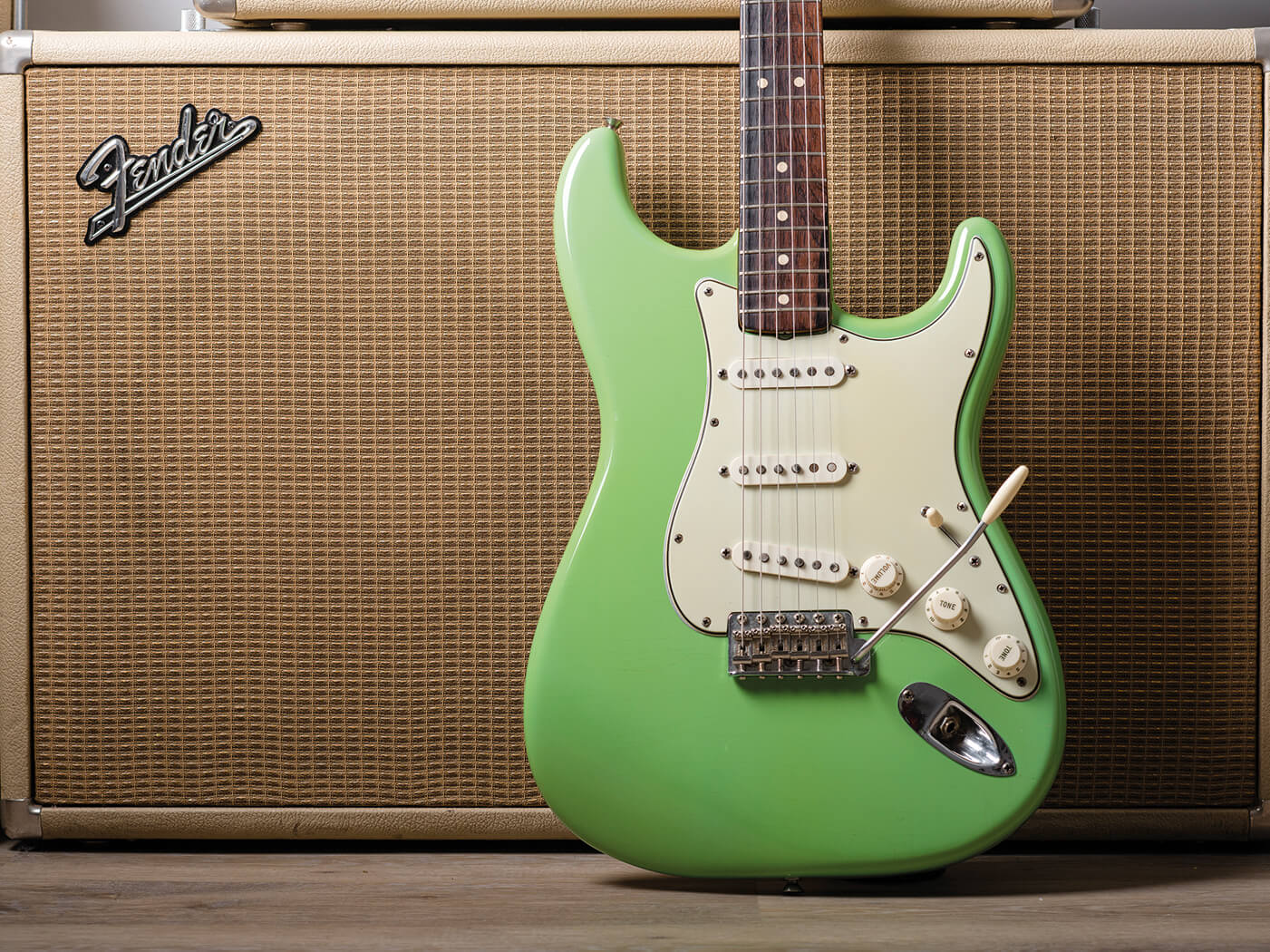 It’s serendipitous that we get to try the Surf Green Strat while we’re in the process of working on a korina Epiphone Flying V. Korina is a light timber, which we have already noted, but experiences with the Flying V suggest it also has a very loud, bright and airy tone. That’s very much the case here, because the green Strat sounds very different to the red model – or indeed any alder-bodied, veneer ’board Strat from this era. The acoustic tone is extremely airy, conspicuously bright and doesn’t generate a lot of low end.

In contrast, the former Eric Johnson guitar is darker, much thicker in the midrange and extends lower. In other words, it’s a lot more balanced across the frequency range. Korina actually sounds way closer to swamp ash than alder, but it’s perhaps not as strong in the bass or as compressed and to our ears, it’s also the loudest of the two.

These acoustic discrepancies carry over into the amplified tones, with the ’61 Fiesta Red producing a smooth and full-bodied growl. In contrast the ’63 Surf Green is noticeably brighter, clearer and more spanky. It looks and feels like an early 60s Strat but sounds and responds more like a mid-50s example, so cognitive dissonance abounds. 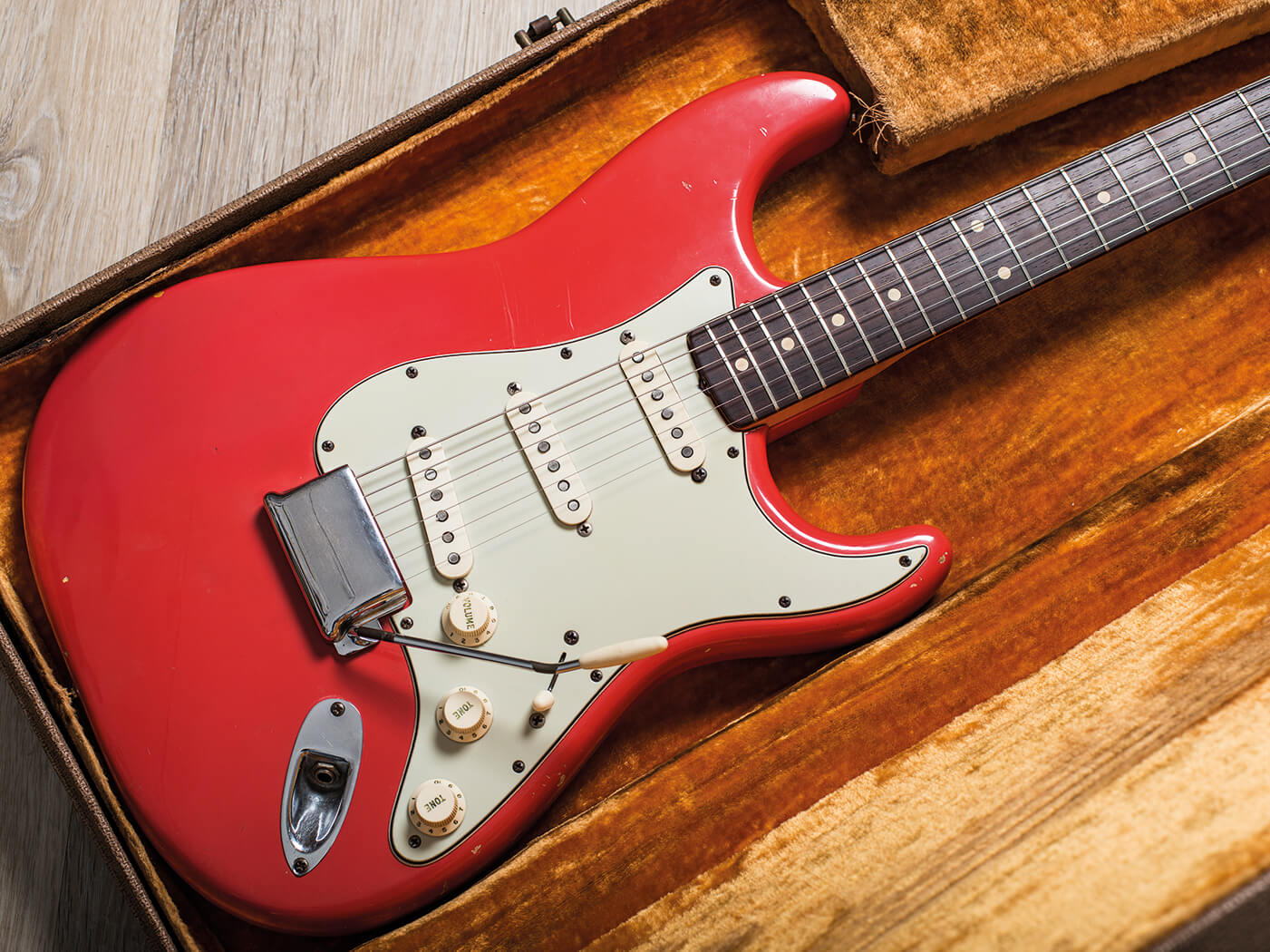 An airy treble characterises Strat pickups from this era, so the korina serves to exaggerate the effect. Even so, it never veers into shrillness and we perceive a greater degree of clarity and detail. However, where the green guitar snarls, the red guitar roars and we find each pickup setting distinct yet equally enjoyable. The alder-body guitar sustains better, too, with that smooth and fluid quality that is so much part of Eric Johnson’s tonal palette.

The Surf Green ’63 is hard to beat for crystal-clean Hendrix tones, wiry blues and cutting funk rhythms, but we find ourselves favouring the neck and middle pickups and rarely venturing onto the bridge. In a straight shootout, the sonic differences between korina and alder are clear and obvious. The green ’63 Strat is a fascinating rarity, both in terms of colour and sound, but it’s some distance away from the quintessential early 60s Strat tone of Eric Johnson’s former squeeze.