Only a year separates these two Gibsons, but the sonic and structural changes are significant. Find out what happens when single and double-cut Les Paul Specials from 1958 and ’59 go head-to-head. 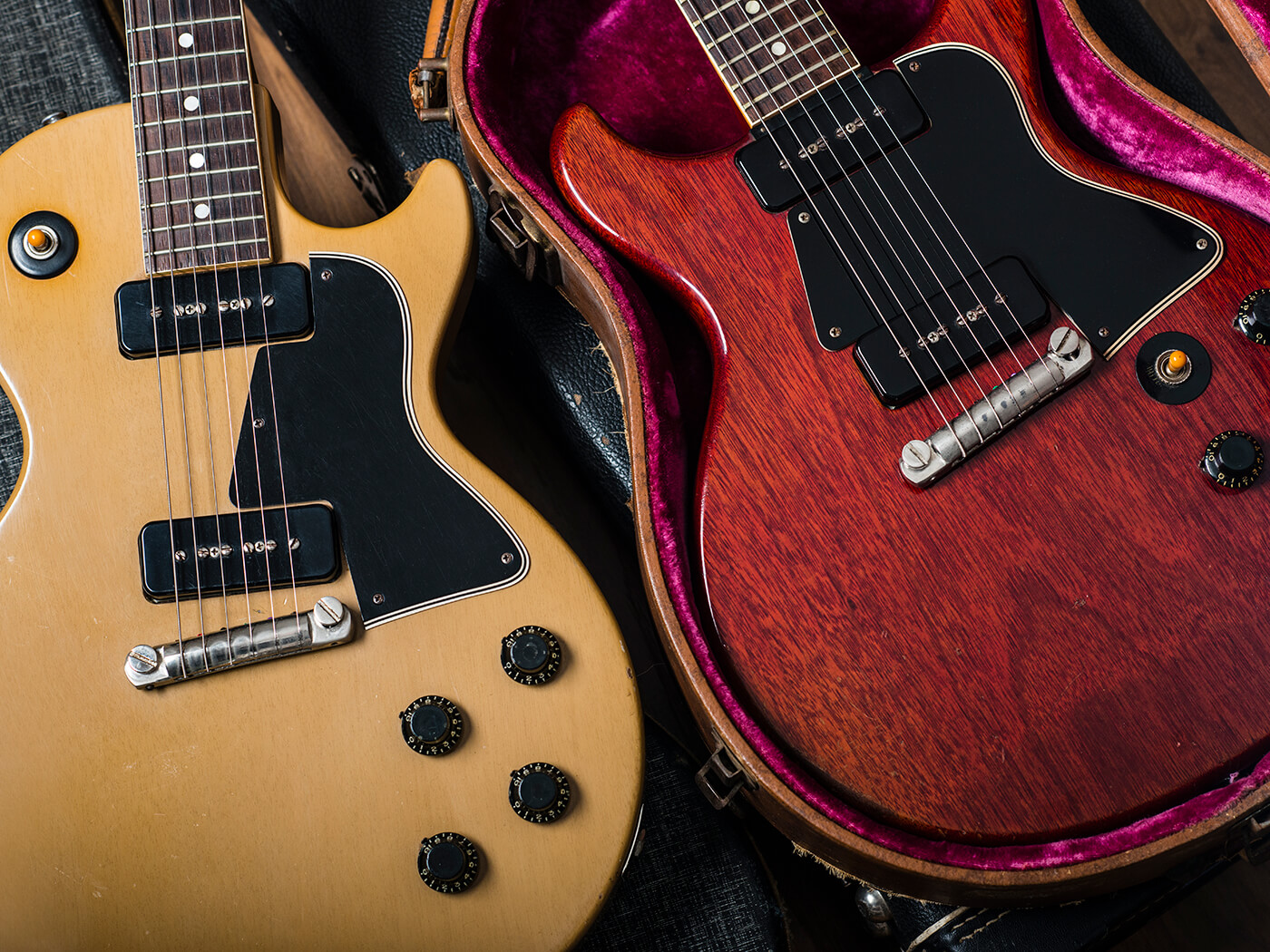 If a week is a long time in politics, a year is a long time in the world of vintage guitars. We’ve said many times that the combination of a slab of Honduran mahogany, old P-90s and a zamak wrapover bridge offers as close to a sure-fire guarantee of great guitar tone as it’s possible to get, but although this pair of 1950s Les Paul Specials have that much in common, there are some significant structural differences. How much difference does a year and an additional cutaway make? Let’s investigate…

The double cutaway superseded the single cutaway in mid-’58 and the differences between them extend beyond the stylistic. Gibson’s radical move towards unobstructed upper fret access necessitated a complete redesign of the neck joint – but we’ll discuss that in more detail later.

The selector switch also had to be relocated, and after the initial run of double cutaways, Gibson began giving the bodies a softer edge roll-over. Our double-cutaway example has five serial numbers after the date digit and the rounder body edges, but since it still has the ‘Special’ logo, it was most likely produced some time during the first half of 1959.
The single-cut’s most distinguishing feature is the rubber washer around the pickup selector switch where you might expect to see a ‘poker chip’. Gibson’s rationale for using rubber parts on electric guitars has long been forgotten, but rubber rings often featured on its high-end jazzboxes and were apparently only fitted to single cutaway Les Paul Specials around March 1958.

If Juniors were the ‘student’ models, Specials must have been seen as a ‘postgraduate’ stepping stone towards Gibson’s higher-end solidbodies. The refinements included a second pickup, fingerboard binding and er… that’s about it. But despite occupying the entry level end of the catalogue, Juniors and Specials were professional quality instruments. Rather than compromise on the pickups and materials, Gibson simply devised a way to build a simpler version of the Les Paul in order to reduce costs.

No doubt taking inspiration from Fender’s Broadcaster/Telecaster, Gibson eschewed the carved maple top and instead used mahogany bodies that were flat on the front and back. And it was the same lightweight Honduras mahogany that was used for Les Paul Goldtops, Customs and the later Bursts. Mahogany necks were still glued in, and Brazilian rosewood was used for the fingerboards.

It’s hard to conceive of a better preserved single-cutaway TV Special than this example. Besides a bit of buckle rash and a few scrapes around the lower bout, the finish is in remarkable condition and there’s barely any neck wear. Gibson’s TV finish varied over the years, but we’d describe this as Dijon mustard with a hint of olive-green drab. There’s no pale undercoat and you can just about see the grain through the finish.

At the time of writing, the guitar is fitted with a bridge that may not be original. The top is quite sharp, rather than rounded, it’s skewed towards the bass side so the strings run off centre, and the measurements differ slightly from the indisputably original bridge on the ’59. However, we’re assured this guitar will be sold with a genuine vintage bridge.

The cherry guitar’s finish is in almost as fine shape. There’s a bit more patina in the form of lacquer checking and neck wear at the headstock end, but the colour remains remarkably unfaded. Both guitars retain their full complement of factory-fitted Centralab potentiometers and oil-filled ‘bumblebee’ capacitors, and the correct three-on-a-plate single line Klusons are the only tuners ever to have been fitted.

If you’ve never played a vintage Gibson before, you may feel a little intimidated by the neck depth. But if you persevere, you might find you soon forget the ‘size’ and ease into the sublime playability. Once your brain adjusts, 1950s Gibsons such as these have an ‘old slippers’ level of comfort and familiarity.

We’ve become quite accustomed to the 50s Gibson feel over the last few years, and would no longer describe these necks as being especially fat. As for the ‘baseball bat’ comparison, we can only assume it was devised by people who had never spent much time with guitars such as these, or were simply oblivious to the finesse and subtlety of Gibson’s 50s profiles.
Both guitars feel fantastic in the hand and there’s little to choose between them. The single cutaway’s neck is a fraction deeper, while the double cutaway’s depth remains slightly more consistent along its length, but in essence, they’re pretty much the same.

We find the single cutaway balances in the lap a little better, but again it’s barely noticeable, and the double cutaway has none of the neck heaviness associated with SGs. It does have a bit of neck whip, so Townshend/Frisell-style vibrato is on the cards, but the whole structure feels more solid and stable than a typical SG.

The single cutaway’s frets are almost uniformly flat on top, and whether that’s down to playwear or fret levelling is open to question. The upshot is that the wider frets are actually lower in height at 0.75mm (0.03”). We find the narrower frets easier to play, but again we’re splitting hairs. The double cutaway guitar has a replaced nut, but it appears to be vintage correct nylon.

Some might argue that having just two guitars to compare isn’t much of a sample group from which to draw definitive conclusions regarding tonal qualities of single and double cutaway Les Paul Specials. Nevertheless, the unplugged characteristics of these guitars are so distinct, we’re confident that our observations are broadly applicable.

Both guitars weigh about the same, and the materials are identical, yet the double cutaway is noticeably brighter and louder. It’s comparable to a really nice early SG Special, but we hear a tad more heft in the low mids as well as a more complex and shinier treble response. There’s also a pleasing solidity and clarity to the tone that combines woodiness with a gnarly bite.

All these seductive sonics incline us towards the double cutaway at first, but our viewpoint becomes more nuanced as the single cutaway’s subtle charms gradually reveal themselves. It may be less bright and quick to respond, but we soon realise that the oft-cited correlation between single cutaways and superior sustain could be a fair assessment.

Listening carefully to the ADSR (attack, decay, sustain and release) curve, the double cutaway responds with a very fast attack that holds its level for a second or so. It then drops off quite suddenly to sustain well – albeit at a slightly lower level before a gradual fade out. In contrast, the single cutaway holds its peak level longer, with the fade to silence occurring in a more even and gradual way – over quite some time. In other words, the decay phase is largely absent from its ADSR curve.

It’s a far warmer and mellower tone that is more in keeping with our expectations of a 1950s Gibson solidbody, and not dissimilar to a 1954 Goldtop we have on hand to compare. However, the single cutaway sounds brighter and louder than the Goldtop – probably because there’s no maple cap to subdue the mahogany’s natural sonic exuberance.

Time to amp up, and it’s immediately apparent that the pickups both reflect and emphasise the characteristics we hear in the unplugged tones. Bear in mind that only a year or so separates these guitars, but the pickups have vastly different tonal qualities.

Without sending the pickups off for metallurgical analysis, it’s impossible to provide a definitive explanation. It’s widely accepted that P-90s were made with alnico III magnets until ‘around’ 1957, after which Gibson supposedly switched to alnico V. Then again, vintage pickup restorers have concluded that the grade of alnico magnets Gibson used was often dictated by availability. Therefore, manufacturing dates often indicate a range of possibilities rather than absolute certainties.

What’s certain is that the single cutaway’s P-90s sound exactly like the alnico III P-90s in our ’54 Goldtop and ’56 ES-225. They’re ultra transparent, without sounding especially bright, and they have a smoothness and fluidity that we love. The bridge has a snarly quack, providing countrified cleans that ease into raunchier rock tones with added overdrive.

Over at the neck, the tone has a pure and rounded quality that is old-school jazz to a tee when played clean, and becomes almost vocally expressive through a cranked amp. The middle position’s phasey mid-scoop and slightly compressed transient attack is a third tonal option that is entirely distinct from the other two.

Besides the possibility of different magnets, we should also factor in the proximity of the pickups to the strings. There’s quite a gap on the single cutaway guitar, but barely any on the ’59. Although there is some scope for adjustment with ‘soapbar’ P-90s, the main reason is the redesigned neck joint.

The double cutaway instrument’s fingerboard terminates at the point where the neck joins the body and the neck extends beyond the neck pickup rout by almost 30mm. In order to keep the neck tenon flush with the top, Gibson had to set the neck deeper into the body. This requires the bridge to be set lower too, for a viable playing action. 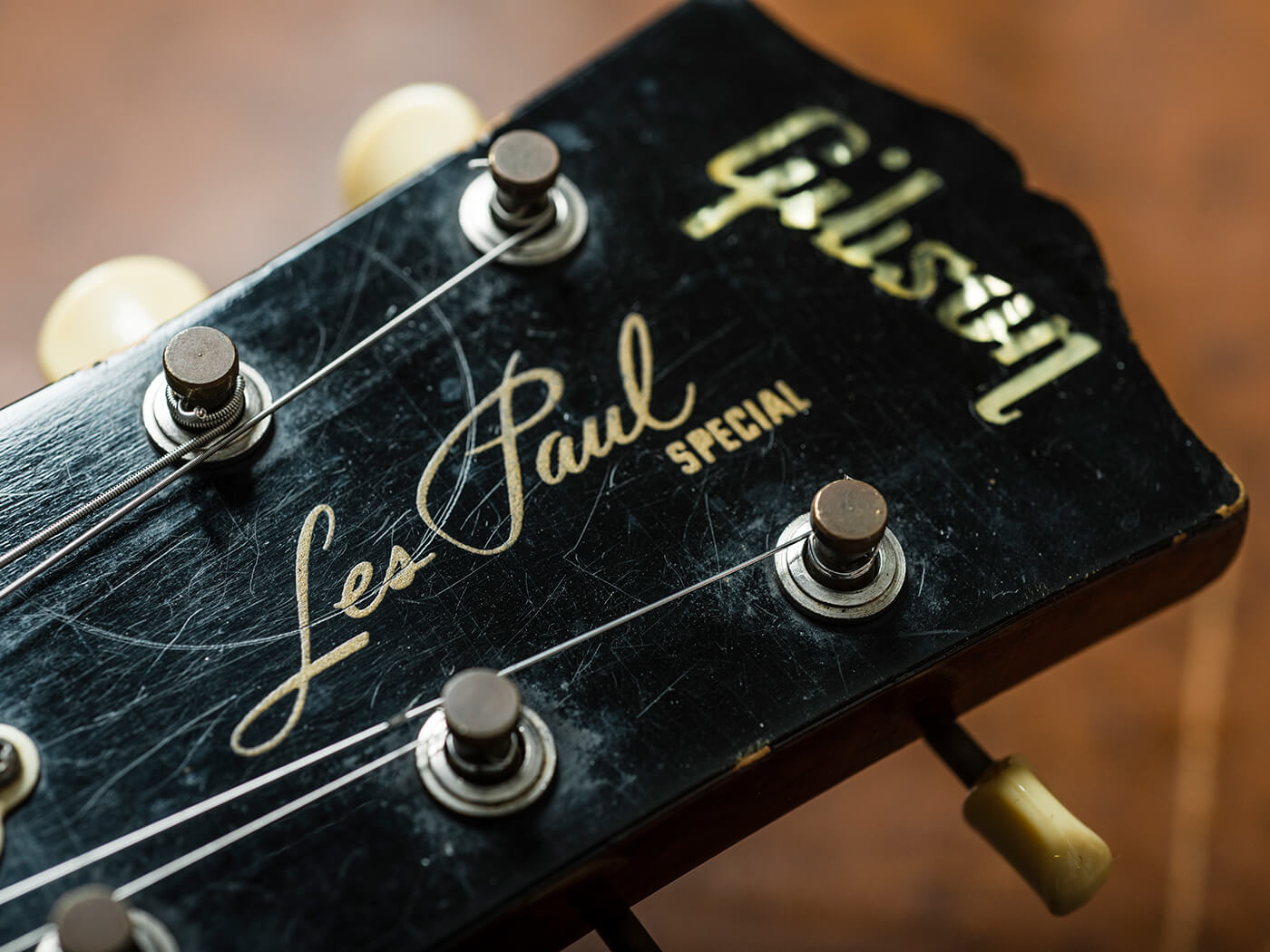 Furthermore, Gibson must have been keen to avoid compromising structural stability by routing too deep into the tenon to accommodate the neck pickup. As a result, it sits about 5mm closer to the strings by default, and the bridge pickup is set similarly to maintain balance.

Gibson pickups of the 1950s are extremely sensitive to height adjustment and jacking P-90s up like this brings out their brighter and more aggressive qualities. That’s very much the case with this double-cut Special.

The pickups are more powerful, but in actuality they probably don’t produce significantly more output than the 1958 model’s units. We suspect the 1959 P-90s create an impression of greater loudness by emphasising the upper midrange frequencies – much like PAFs with their covers removed.

There’s no denying that the double-cutaway guitar is a far wilder and hairier ride, but the older P-90s counter with a more even frequency response. With less push in the upper mids, the single cutaway’s tone has a smoother and creamier quality that, to our ears, sounds more musical. For reference, the bridge and neck readings of the single and double cutaway models are 8.28k/8.21k and 8.77k/8.41k respectively.

Of the eight 1950s P-90s in the room at the time of writing, the 1959 Special’s bridge pickup displays the least microphony. Consequently, the neck pickup it’s paired with actually sounds clearer and has a more extended treble response. Where the 1958 LP’s bridge pickup has a wiry vintage quack, the double-cut’s has more of a throaty bark, but somewhat less complexity, chime and tonal depth.

On the plus side, it’s less susceptible to high gain squeal and provides a consummate rock tone. The double cutaway’s tone is also far punchier, more up front and has tighter lows. It’s the Special you need for chiming, cutting and crunching through a mix, and with brightness to spare, there’s a bit more scope for working the controls. 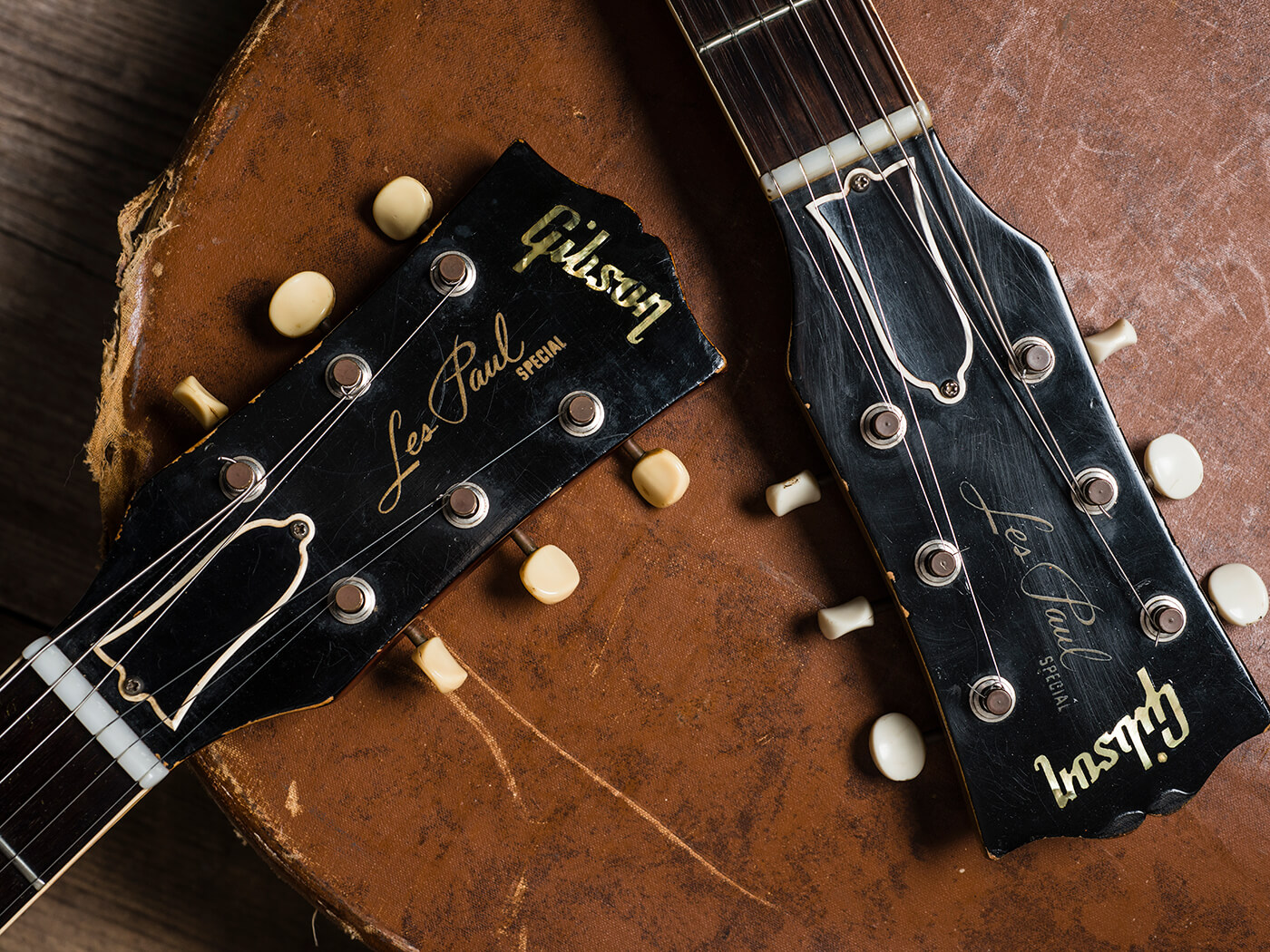 Either of these Specials would be a dream guitar to own, but which one is the best? The answer depends more on your playing style, sonic tastes, aesthetic preferences and how the guitars are being used.

Taken in isolation, we find the single-cutaway 1958 model sweeter sounding and more inspiring to play. We also feel it might be the superior studio guitar. But out there in the real world of rehearsals, and gigging, with the perpetual struggle to hear oneself properly, we suspect the double-cut ’59 could win out.