Fender Deluxe amplifiers date back to the early days of the company but, by the mid-1960s, they were almost unrecognisable when compared to amps from the tweed era. We take a look at what happened during the first half of the 60s and compare amplifiers from the brown and black-panel eras.

By the time Fender introduced the Deluxe Reverb in 1963, its resemblance to the first tweed Deluxe – the 5A3 of 1948 – was virtually nonexistent. During the intervening years, there were numerous other Deluxe models released into the world as the circuitry, cosmetics, output power and onboard features gradually evolved.

Most of you will be aware of the three distinct eras of pre-CBS Fender amplification – tweed, brown and black-panel – but a surprising amount changed in just a few short years in the early 1960s. Here, we’re comparing a 1961 brown Deluxe with a 1965 Deluxe Reverb courtesy of boutique guitar-recording and reamping studio Vintage Tone Factory.

The last of the tweed Deluxe models were made in 1961 and, that same year, Fender completely revolutionised the Deluxe amplifier. It was a new look for a new decade, with tough brown Tolex covering a larger pine cabinet and a brown control panel on the front with clear white labelling.

Round brown ‘cupcake’ control knobs replaced the old-school chicken heads but the tweed Deluxe’s two channel arrangement was retained. Fender finally acknowledged that nobody was plugging microphones into their guitar amps and the new channel designations were ‘normal’ and ‘bright’.

Up to and including the 5E3, all Fender Deluxes were cathode biased, and the brown Deluxe was the first to have fixed-biased 6V6s. This allowed Fender the opportunity to adapt the oscillator circuit from the tweed Vibrolux and make the 6G3 the first Deluxe with onboard tremolo.

The brown Deluxe also ushered in a new era for speakers, with ceramic Oxfords gradually replacing alnico Jensens, though our test subject is now fitted with an alnico Celestion Ruby. Besides a replaced leather handle, this amp is in near-mint condition cosmetically and is completely original externally. That’s no guarantee the amp is in similarly authentic condition electronically, so let’s look inside.

Relatively little electronic work has been done beyond a sympathetic restoration and some safety enhancements. Most of the original blue Ajax signal capacitors have gone, but the SoZo replacements look the part and the cloth-covered wiring appears almost new.

All the electrolytic capacitors are replacements and besides one resistor on the bias board, the resistors are all original carbon composites. Mallory 150s have also replaced two of the tremolo capacitors and thankfully there’s a grounded mains cable. 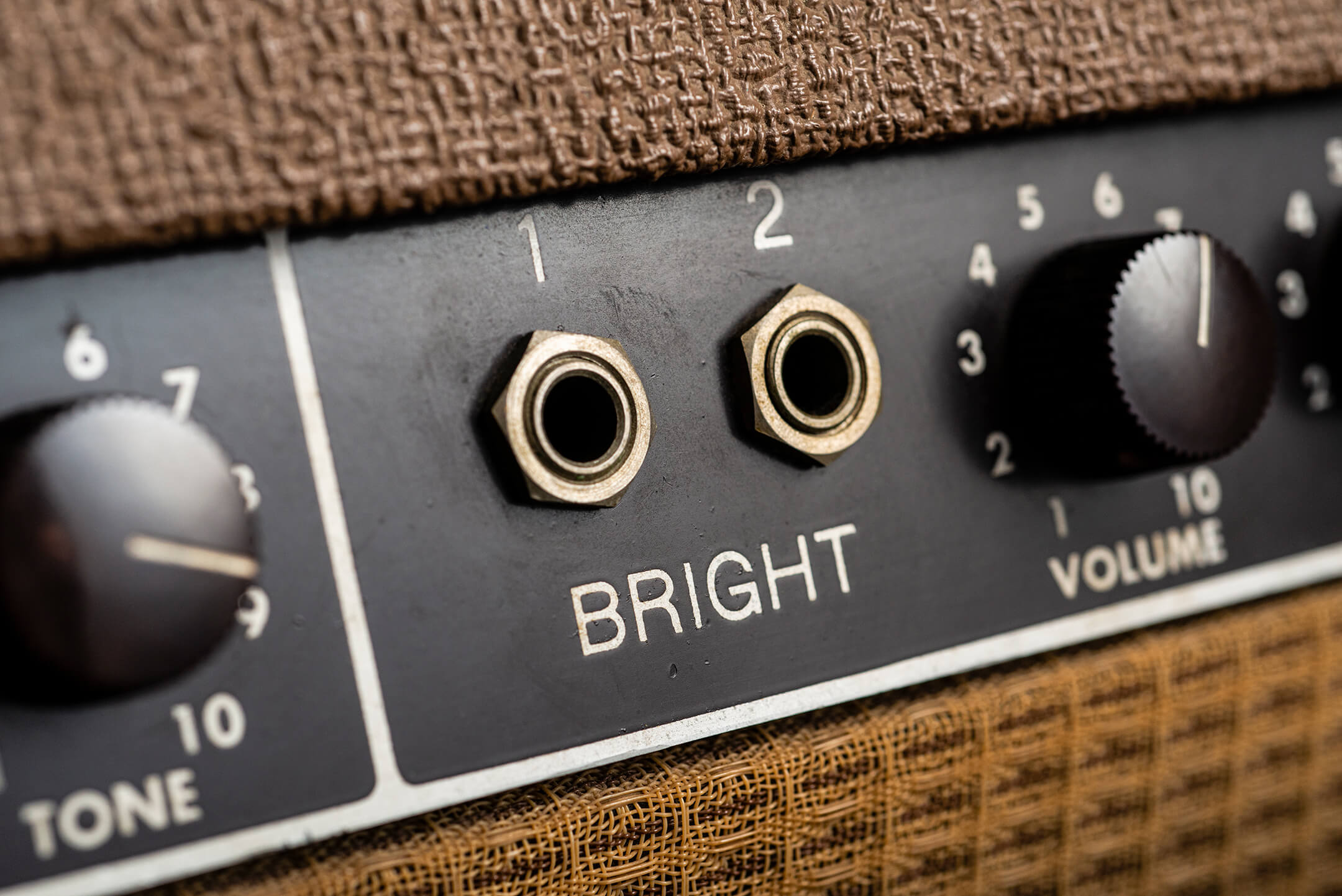 For the 6G3 circuit, Fender used post-output-transformer negative feedback in a Deluxe for the first time since the tweed 5C3. The 5E3’s zero gain cathodyne phase inverter was abandoned in favour of a long-tail pair type, with a 12AX7 that’s able to push the power tubes into overdrive.

Only two components differentiate the bright and normal channels, with the latter having a 0.01uF capacitor on its separate tone control rather than a 0.02uF. There’s also 0.002uF bypass capacitor across the first tube’s plate resistor in the normal channel that dumps some treble content to ground.

The two channels reconvene before their shared second gain stage via two 220k mixer resistors. These effectively separate the two channels and eliminate the volume control interactivity that many players use to shift 5E3s into wilder territories. Final tweaks include a more robust GZ34 rectifier tube that raises B+1 voltage to a nominal 375v. This combines with the fixed biasing to increase power from the 5E3’s 15 watts to 20 watts.

With enough clean headroom and volume for today’s gigging environment, plus sumptuous onboard spring reverb and tremolo, easy portability and sweet overdrive when pushed, it’s little wonder that many players regard the Deluxe Reverb as the ultimate do-it-all Fender amp.

However, black-panel Deluxe Reverbs were not all created equal and our first task is figuring out which model this is. The first version of the Deluxe Reverb was the AA763. Fender subsequently made a few minor modifications to increase clean headroom, which included reducing the tail resistor value from 27k to 22k and changing one of the plate resistors from 100k to 82k.

The reverb mix resistor went from 4.7M to 3.3M to make the reverb level less dominant and grid stopper resistors were reintroduced for the 6V6s to control blocking distortion and sweeten the overdrive characteristic. The value of the tonestack’s midrange capacitor was also altered. 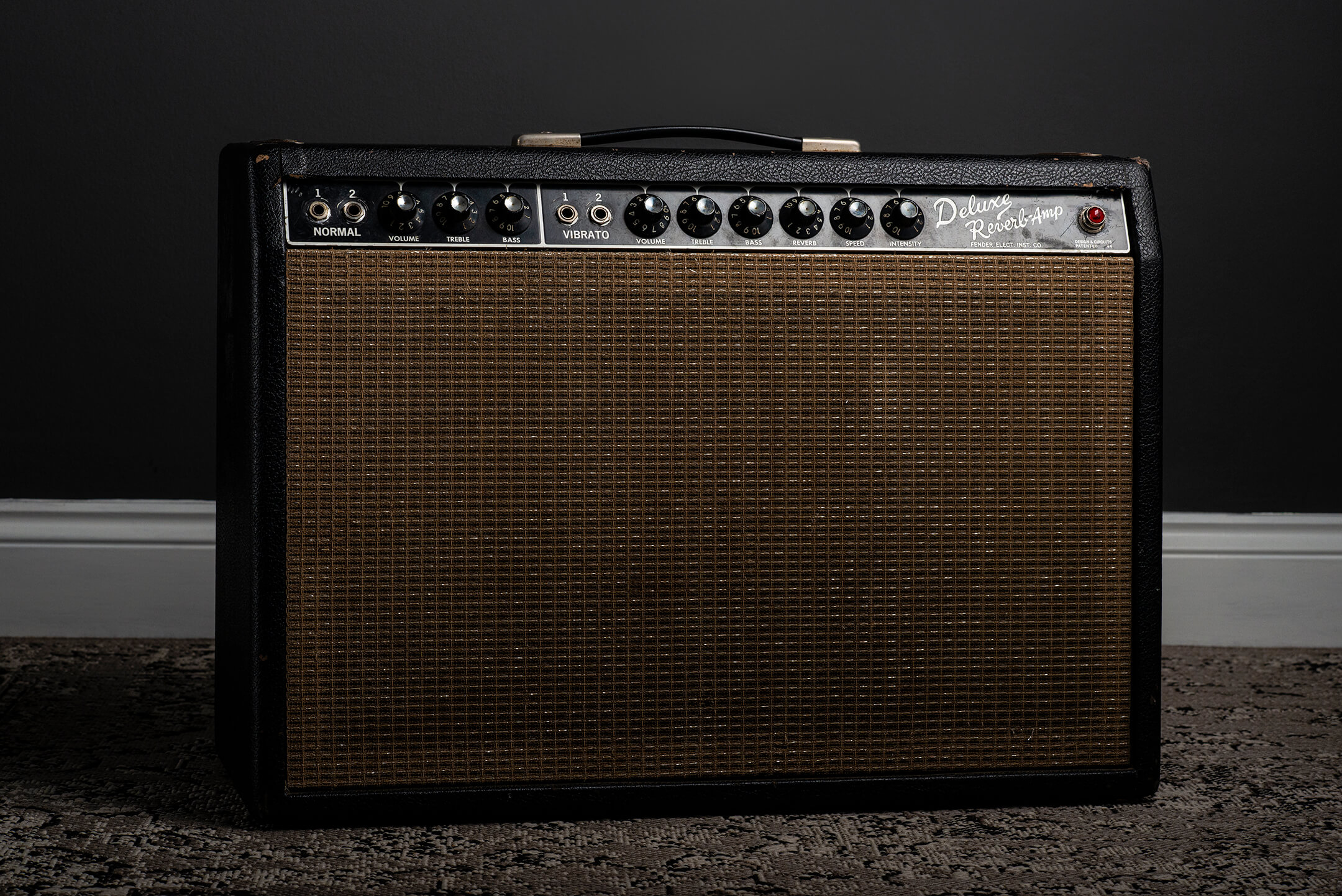 Finally, the cathode resistor on the driver side of the tremolo valve was increased from 56k to 100k and the model designation became the AB763. It’s considered the ultimate version of the Deluxe Reverb and it’s the one we have here.

This Deluxe Reverb’s tube chart has an ‘OD’ stamp, which corresponds with April 1965. The chassis number and original transformer codes are consistent with this, but the power transformer is a modern TAD replacement.

Fender’s standalone reverb unit was introduced in 1961 and, by 1963, onboard spring reverb started to be incorporated into amps. Fender simply persisted with established model names and tagged ‘Reverb’ on the end. The Deluxe Reverb cabinet is wider than the 6G3’s and the differences between the circuits are so numerous that it’s tantamount to a complete redesign. But here we’ll confine ourselves to explaining the key differences.

The long-tail phase inverter was retained, along with the fixed-bias 6V6 power tube pairing, but a 12AT7 phase inverter tube is used rather than a 12AX7. The 6V6s got a nominal 415v on their plates, which actually exceeds the recommended maximum voltage for 6V6s, and Fender added screen and stopper resistors. 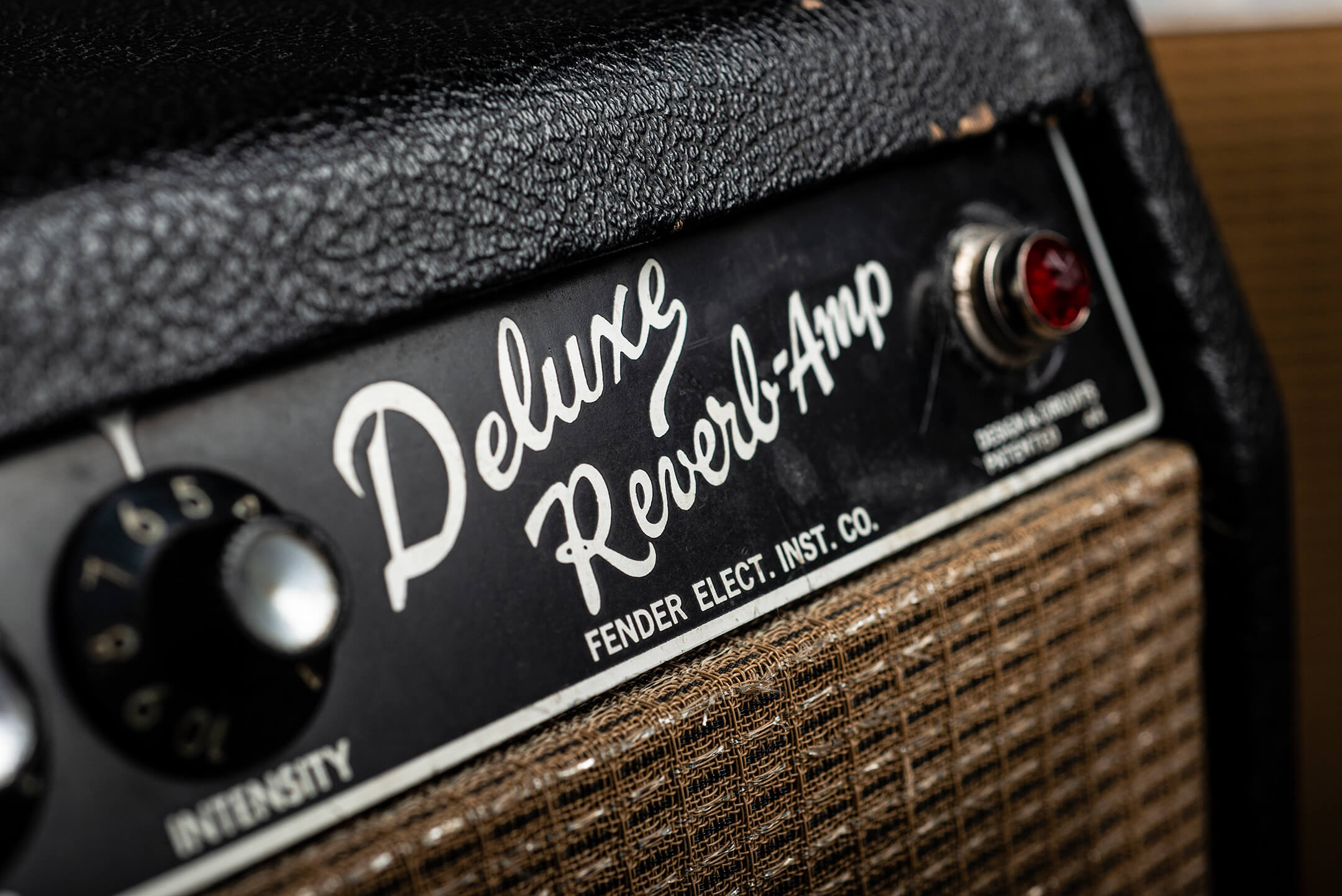 The tremolo was completely redesigned and rather than acting on the power tube bias, it’s applied to the preamp stage of the vibrato channel, just before the phase inverter. Unlike the brown Deluxe’s single triode tremolo circuit, the black-panel design uses both sides of a 12AX7 and an optocoupler, which combines a light source and a photoresistor.

The spring reverb feed comes after the tonestack. A 12AT7 is configured in parallel as a driver for the spring pan and a single 7025 triode stage is used for signal recovery before the reverb and dry signals are re-combined via a reverb level control and a mixer resistor.

All these features are significant, but the Deluxe Reverb tonestack makes the biggest sonic difference of all. For both the reverb and non-reverb black-panel Deluxes, Fender moved to a more sophisticated treble/middle/bass tonestack – albeit with fixed mids. 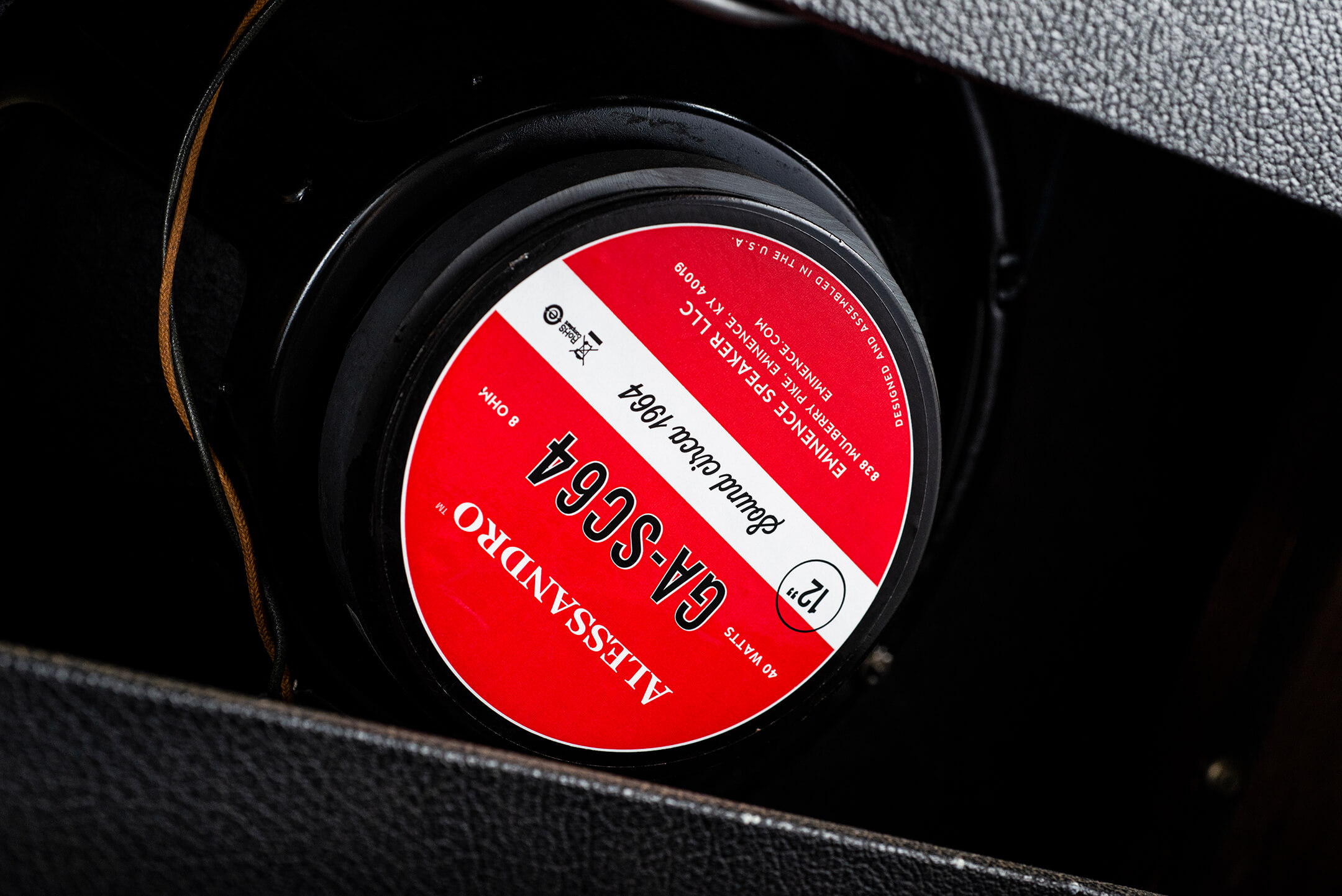 With treble and bass at zero, the frequency response is nominally flat, but with both set higher, it’s often described as a ‘mid scoop’. In reality, once it has passed through a second gain stage, it’s more of a bass and treble boost.

Externally, this Deluxe Reverb is not in quite such fine condition as our 6G3 Deluxe, but electronically it’s closer to factory spec. There’s a full complement of blue Ajax signal capacitors and only the electrolytics have been renewed. A couple of 1R resistors have been connected between the 6V6 cathodes for easy bias setting, and the preamp plate resistors have been changed to keep noise levels low.

This amp has also been safely grounded and runs on UK mains voltage thanks to a factory selector switch on the rear panel. An Oxford 12K5-6 would most likely have been the original speaker but the Eminence GA-SC64 here is an appropriate modern alternative.

At some point, it’s probable that most of us have played a Deluxe Reverb or something very similar. The same cannot be said for the rarer brown Deluxe since it was something of a stopgap that Fender only made from 1961 to 1963.

The 6G3 Deluxe was even something of a one-off in the context of brown-panel Fenders. That said, Billy Gibbons used a brown Deluxe on the early ZZ Top albums and Joe Bonamassa is a big fan, with some regarding these amps as mini Marshalls disguised as Fenders.

The main reason is that the first tube has 220k plate load resistors rather than the usual 100k units, and the cathodes share a 1.5k resistor. This results in a very hot front end similar to the blonde Bassman, so the brown Deluxe is naturally inclined towards overdrive.

With a Telecaster it stays clean up to about three, by which point it’s reasonably loud. It’s a warm and wonderfully clear tone, with such touch sensitivity that we’ve never played another 1960s Fender amp that makes us feel so musically connected. 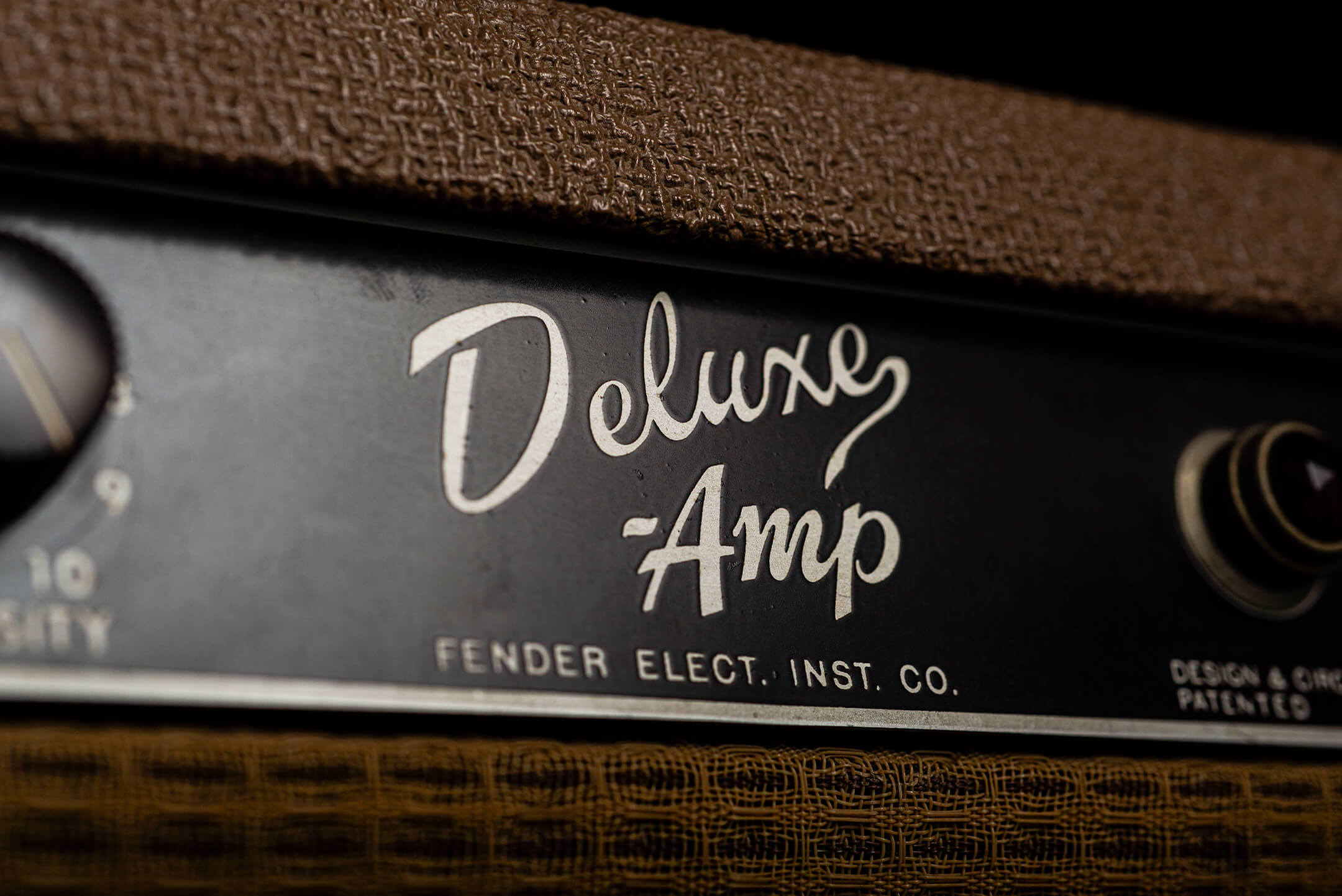 The tremolo is deep, strong and yet never interferes with the front of a note or seems to be the wrong stage in the cycle when you want some punch and definition. It’s swampy perfection.

Pushing beyond three, it’s overdrive heaven as the tone smooths, blooms and eases into uncanny sustain. Massive amounts of overdrive are available but it has none of a 5E3’s ferocious fuzz or boxiness, and it holds together far better.

We find the Marshall analogy potentially misleading because it’s largely based on the 6G3’s appetite for overdrive. The brown Deluxe tone is more cultured, devoid of fizz and has a creamy righteous growl that doesn’t sound remotely ‘British’ in origin – even with this Celestion onboard.

To get the most out of it you need to get used to the volume and tone control interaction. Both increase the gain as they’re turned up, but the volume control also adds girth while the tone control emphasises treble frequencies.

That gives you some leeway to set the volume, treble and overdrive, and subtly shape the midrange. The normal channel sounds identical but darker – while it’s not the most versatile amp, the core tone is so amazing it hardly matters.

Moving onto the Deluxe Reverb, setting both channels identically reveals that extra treble doesn’t necessarily equate to extra clarity. We find the normal channel has a fuller and more ‘straight through’ sort of tone with a naturally balanced quality, but there’s not a world of difference.

The vibrato channel sparkles and has a sweetness in the treble response that never becomes searing. With a Strat it’s an undeniably pretty combination and the reverb is huge, deep and three-dimensional. It also integrates seamlessly with the dry signal to create a wonderfully unified whole.

The tremolo has a choppy and fluttering quality with reasonably fast attack and decay times. The tremolo circuit might need some attention because the effect cuts out before the speed achieves Bang Bang frequencies and we might prefer the slower settings to be even slower.

But this isn’t about swampy pulsations tugging rhythmically on your heart strings. It’s a classic effect of course – and, in combination with the reverb, one that’s instantly recognisable from countless classic recordings – but overall we prefer the voicing of the brown Deluxe’s tremolo circuit.

With the Strat, things stay reasonably clean all the way up to about seven on the volume control. Above that, overdrive eases in and sustain is enhanced, but it never becomes ‘heavy’ as such and we do find ourselves needing some stompbox assistance to push things into SRV territory. Plug in a Gibson with P-90s or humbuckers and you’ll find there’s a real sweet spot where compression and break-up enter the fray between four and five on the volume control.

In contrast, the 6G3 Deluxe is essentially a stepping stone between the tweed and black-panel eras. It’s more roots than country and more Houston honk than Tennessee twang. The Deluxe Reverb is clearly the more sophisticated and iconic amp, but if Fender had simply added spring reverb to the 6G3 and called time on Deluxe development, that would have been fine by us.