Some of the biggest names in pop history have played Epiphone Casinos, but this is one of the rarest of them all. 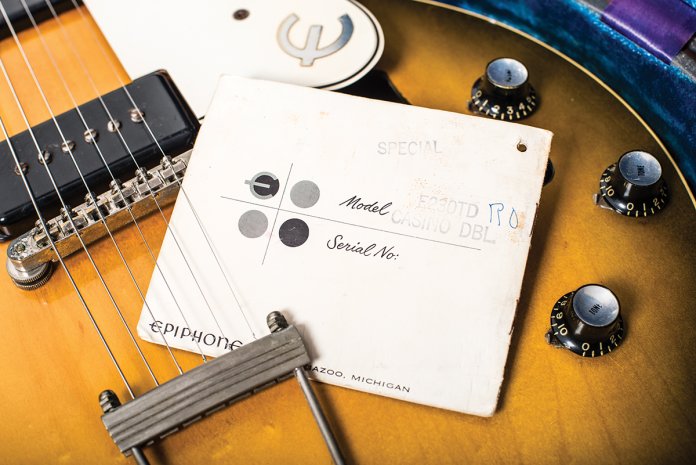 The thinline, hollowbody Epiphone Casino was introduced in 1961, two years after its close cousin, the Gibson ES-330. Though the Casino wouldn’t go on to become as big a seller as the ES-330 (production of which peaked at 4,898 in 1967, versus the Casino’s 1,814), Epiphone shipping records indicate that in its year of introduction, the company shipped a healthy 110 E230T single-pickup, 176 E230TD twin-pickup and 153 E230TDV twin-pickup models equipped with the company’s Tremotone vibrato tailpiece. 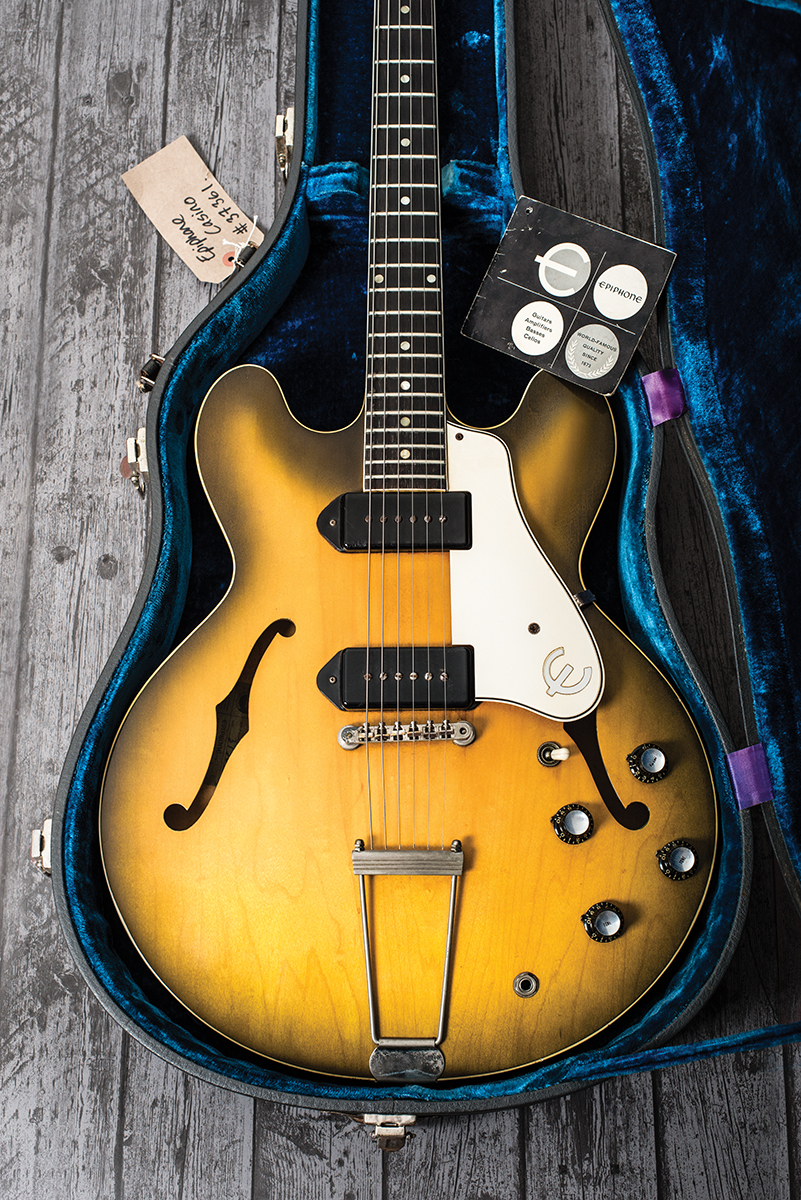 Our Casino’s serial number – 37361 – and trapeze tailpiece suggest that it is one of the 176 E230TD models to leave the Kalamazoo factory in 1961, and its dot fingerboard inlays, black pickup covers and ‘short’ headstock are also period correct. 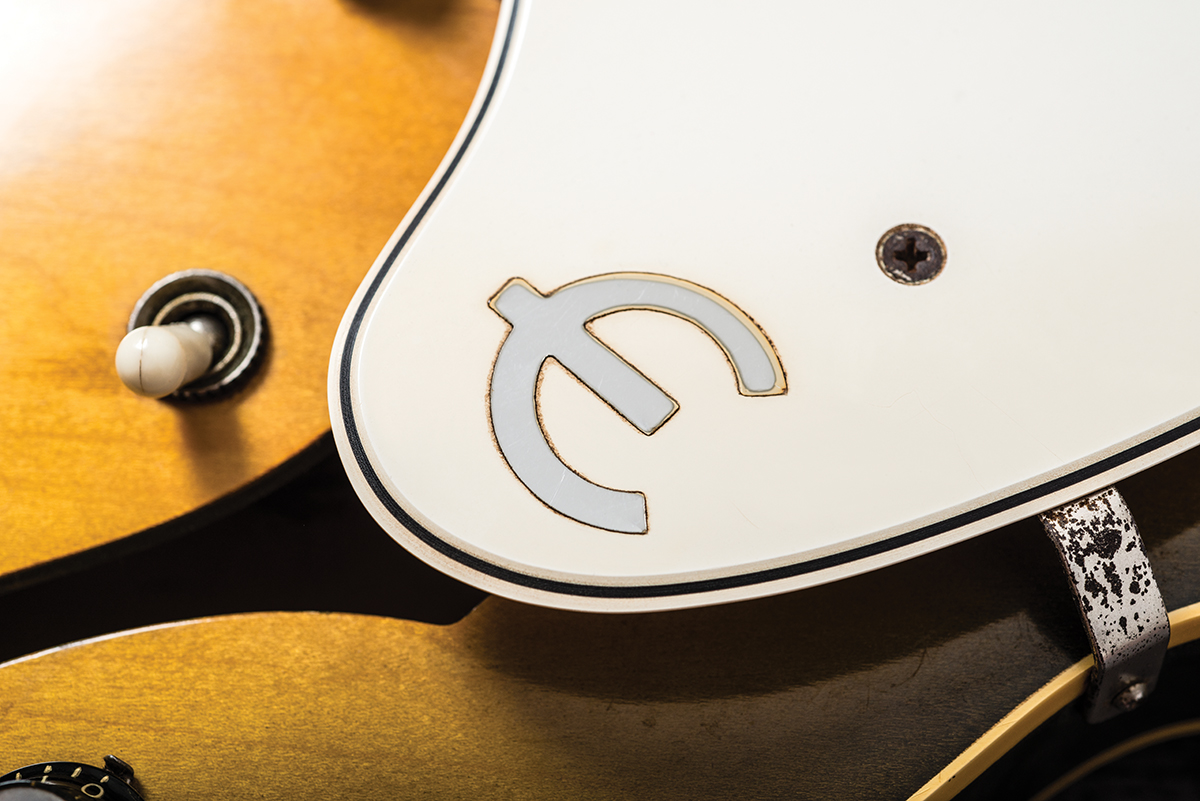 The Casino’s three-ply scratchplate is original, as is the switch tip

Single-parallelogram inlays would replace dots in 1962, the black plastic dog-ear P-90 covers were nickel by ’63 and the Gibson-like ‘open book’ headstock outline became thinner and longer in ’64.

Though the company’s shipping records don’t list the colour breakdown for the first year of the Casino’s manufacture, the 1961 Epiphone catalogue – in which the Casino resides alongside the shortlived Windsor, positioning what might be the company’s worst- and best-known models on the same page – lists the Casino, “dramatic in appearance and tonal

qualities, ultra-modern,” as being available in Royal Tan or “shaded” (aka Sunburst) finishes. 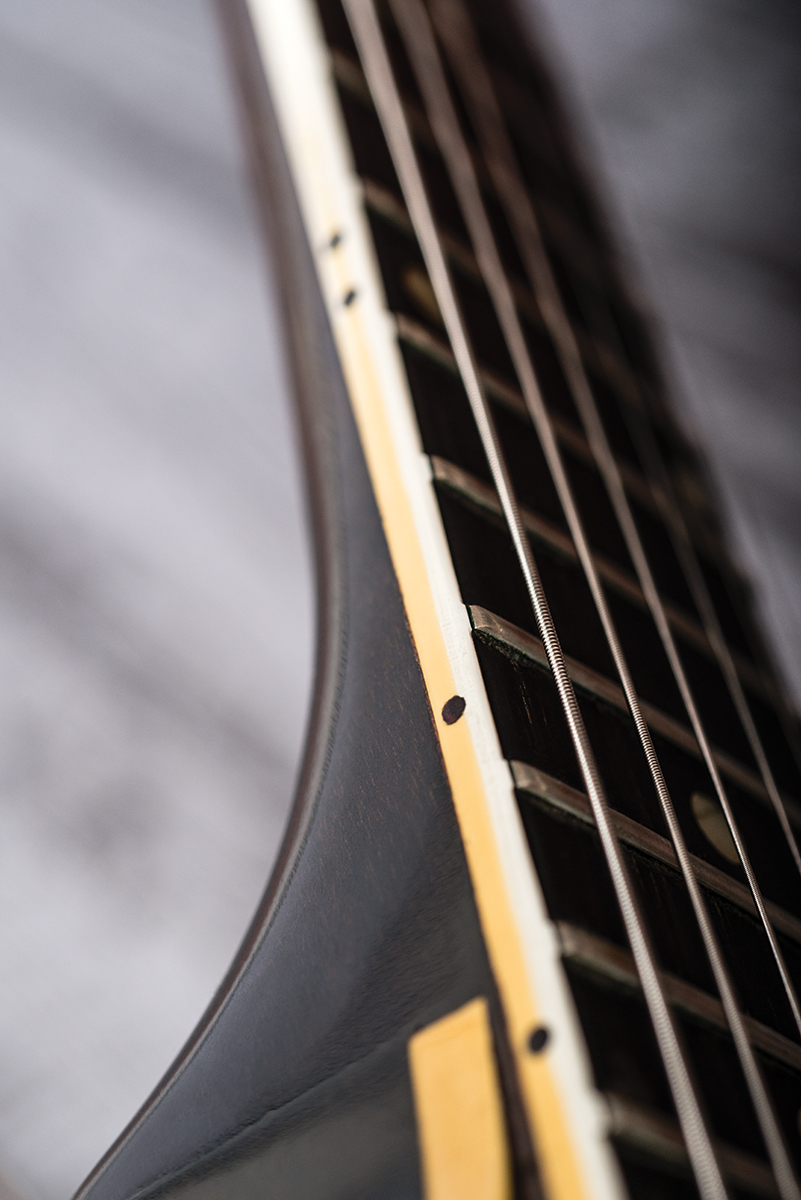 And yet the instrument in front of us is neither sunburst, nor does it have the lighter yellow-orange ’burst of a Royal Tan. As well as its original dark grey, blue-lined hardcase, this Casino comes complete with the original hang-tag booklet, the rear of which is stamped ‘special’ along with the model name and number, while ‘RO’ – for Royal Olive – is handwritten. 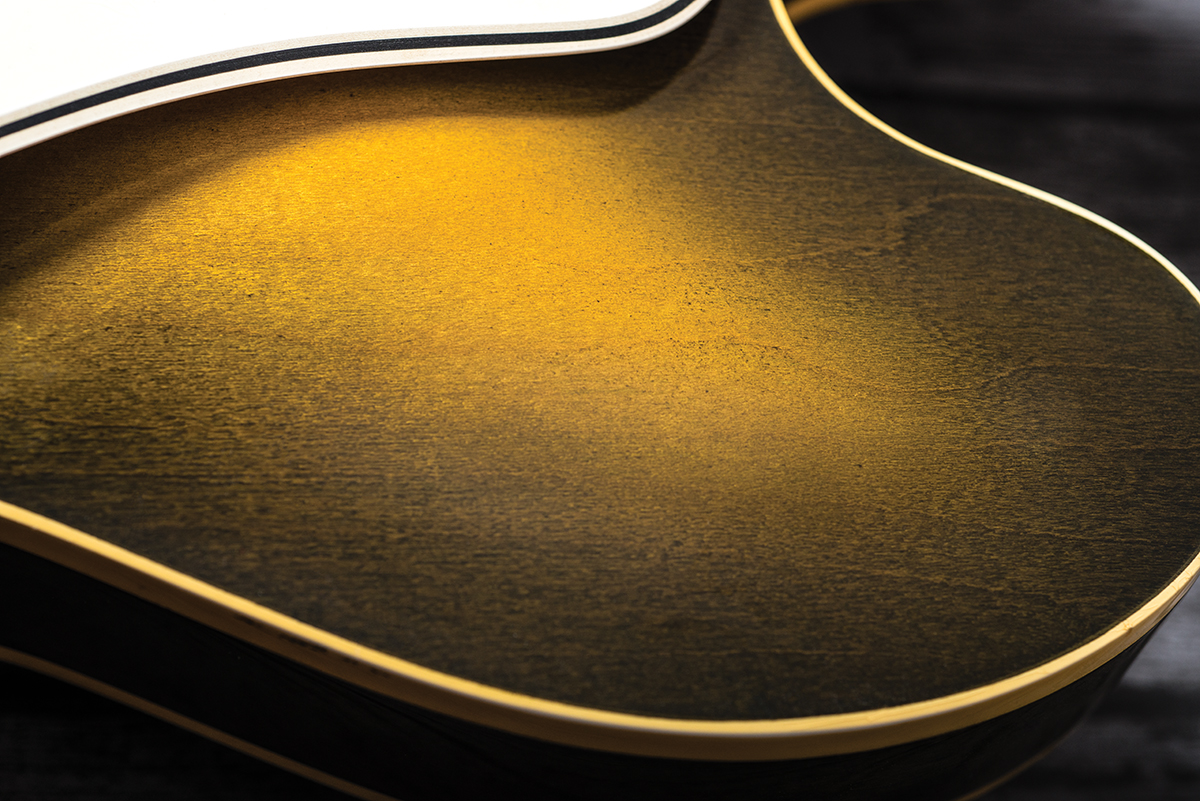 Royal Olive – a curious yellow-green ’burst with the greenish hue continued around the back where it would usually be brown – was a common-enough finish on the single-cut Sorrento thinline but here, on a Casino, it must have been a special order. Is this the only Royal Olive Casino ever made? It’s impossible to say, but it’s certainly an extremely rare bird. 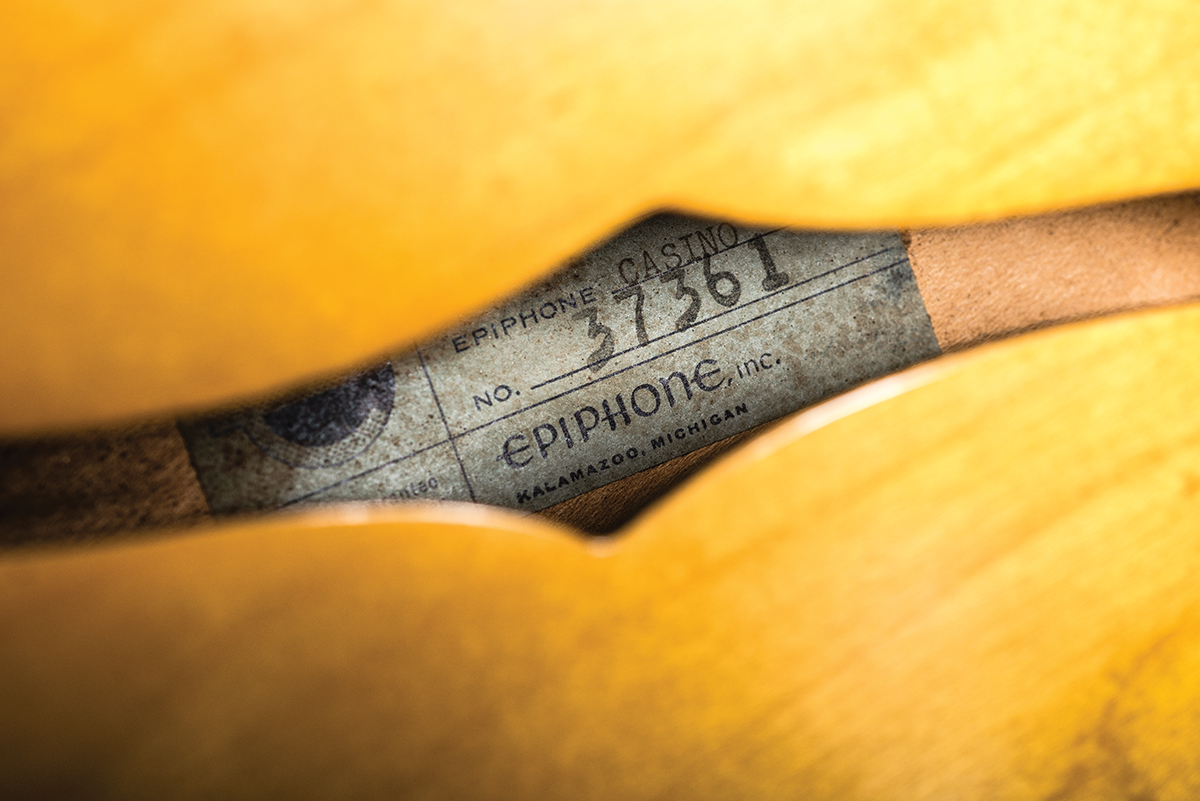 Despite carrying out extensive searches for another example, this is the only one we can find on the whole of the internet, and the only one that the vintage experts we spoke to have heard of. If there are any other Royal Olive Casinos sitting in their cases under beds somewhere, we’d still estimate the total to number only in the single digits.

In use
Regardless of scarcity, this is simply a great hollowbody electric guitar. The first thing that strikes you upon taking it out of the case is the rather slim and flat neck profile, typical of the Kalamazoo factory’s output in 1961 when ES-335s and ES-330s gained a new, speedy neck profile, too. 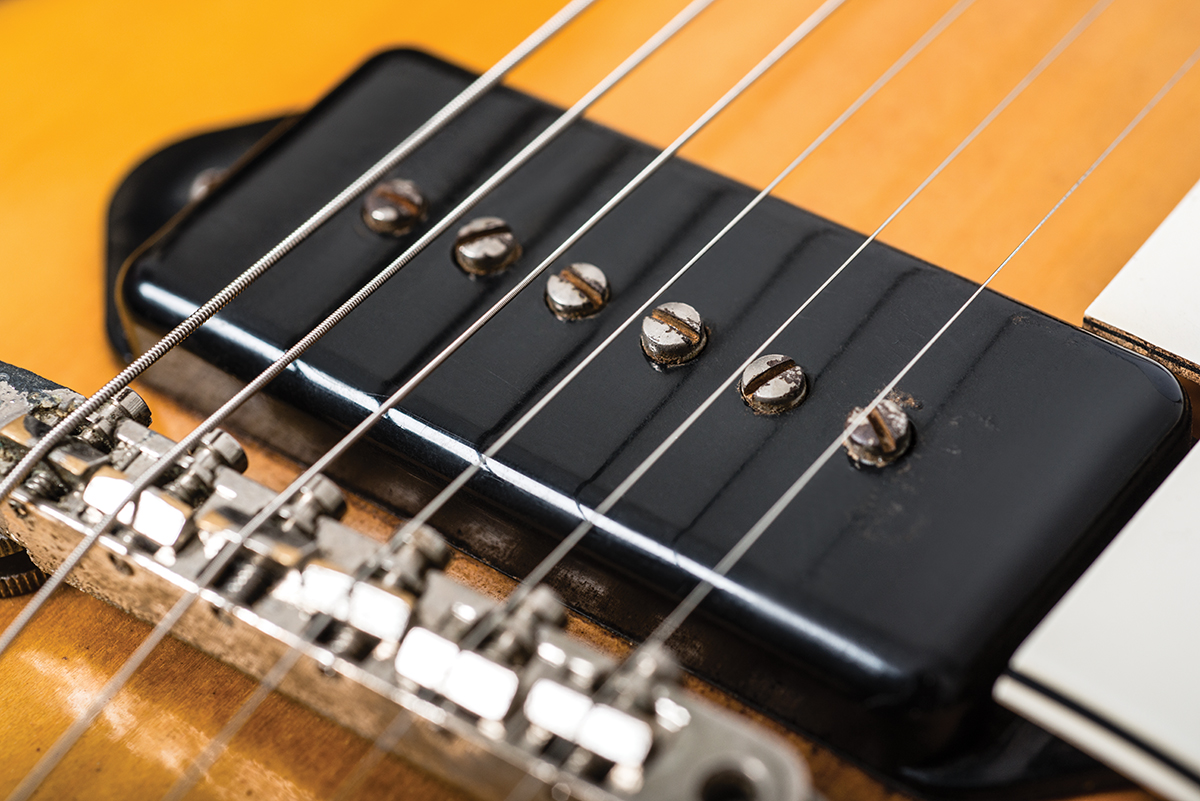 The bridge P-90 is bright, woody and bursting with 60s sonic authenticity

That, in combination with the short headstock and lightweight, original Kluson Deluxe tuners means that, despite the fully-hollow body and lack of a vibrato tailpiece, strapped-

on balance isn’t too neck-heavy. However, like an original ES-330, it’s noticeable that these are much lighter and more fragile-feeling instruments than modern reissues. We’d advise reining in those Townshendian influences… 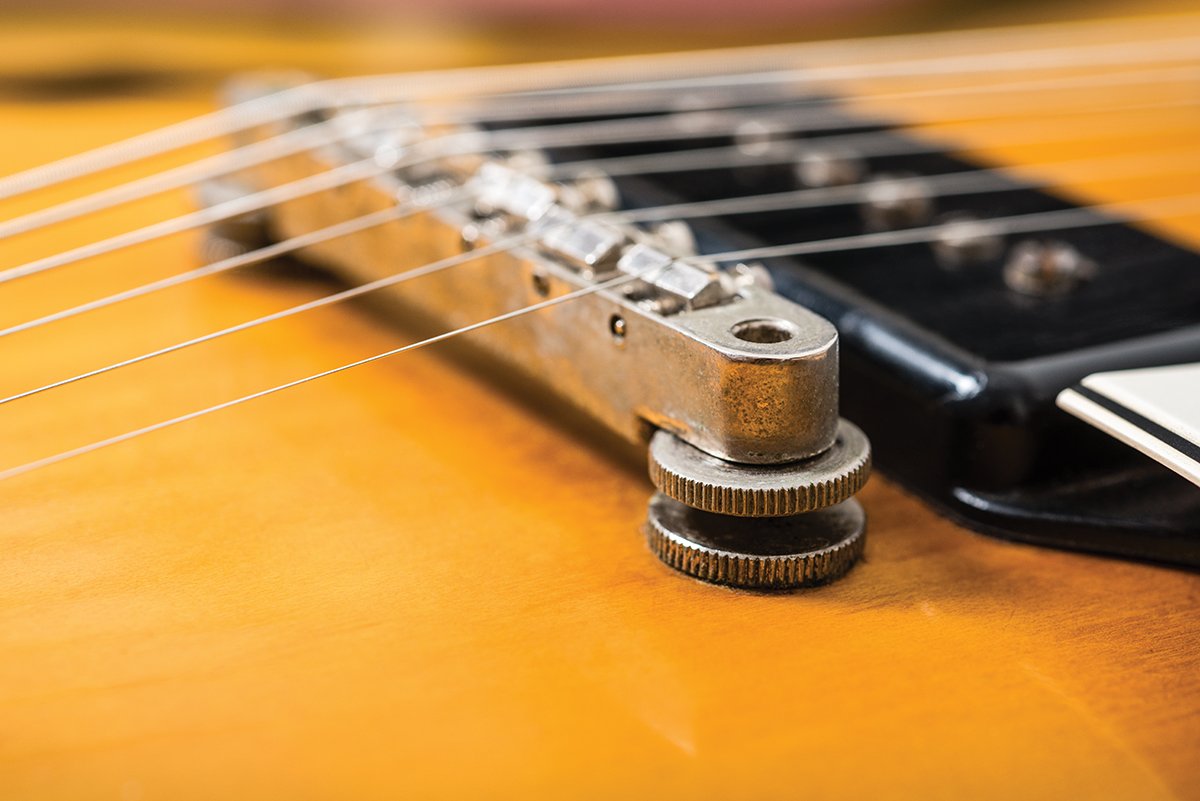 Note two thumbwheels on each side of the Tune-o-matic: likely a factory addition designed to alleviate potentially destructive string tension on the posts

Plugged into a suitably vintage late-50s Fender Vibrolux and a modern Swart AST (itself based on a vintage Gibson circuit), the bridge P-90 proves bright but woody – hard picking down by the Tune-o-matic bridge delivers that twangy early-Stones lead tone with unsurprising yet addictive authenticity, while chiming open-string arpeggios evoke mid-period Beatles with a slightly banjo-like plonkiness that’s really evocative of the period. 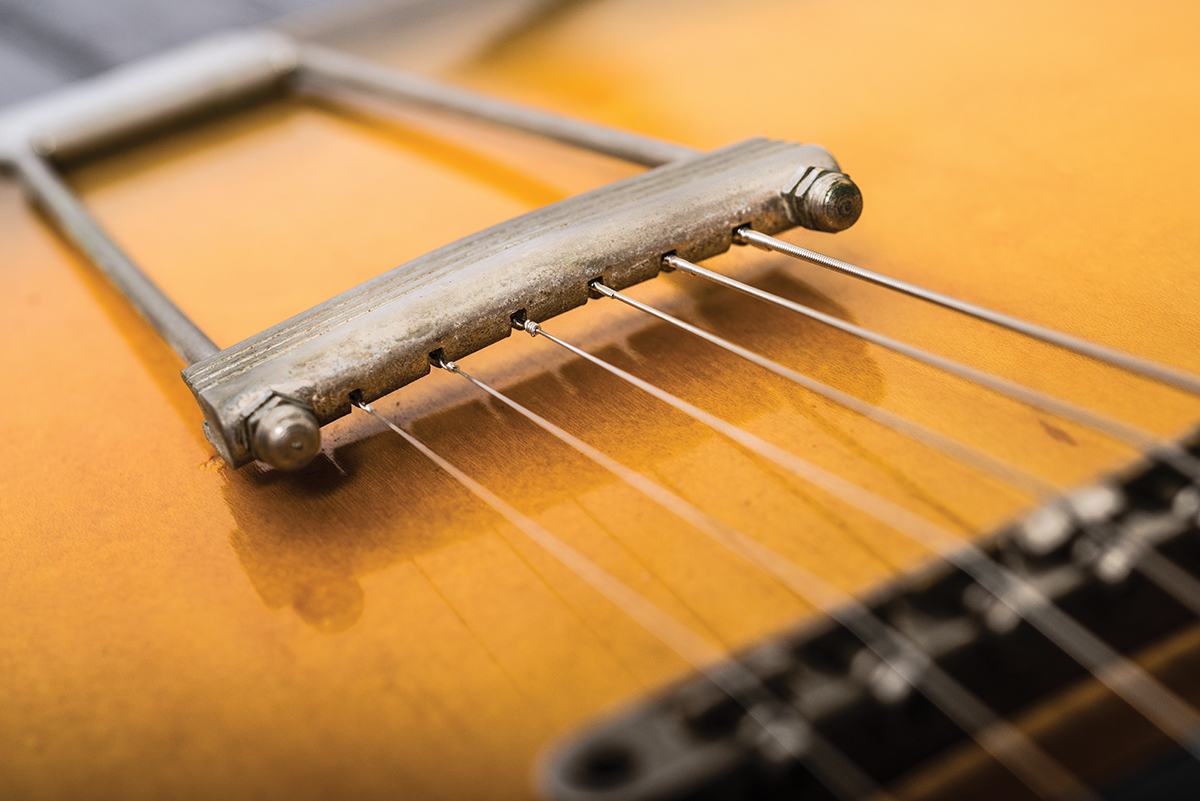 The original trapeze tailpiece is present and correct

It’s pure Revolver, even if the actual instruments on that record were a mixed bag.
Winding up the gain delivers creamy lead sounds with real bite when you dig in; it’s wonderfully dynamic. If you can drag yourself away from the bridge pickup, you’ll find a beautifully voiced neck pickup that’s not too dark, but is nicely smoky for blues-y lead. The 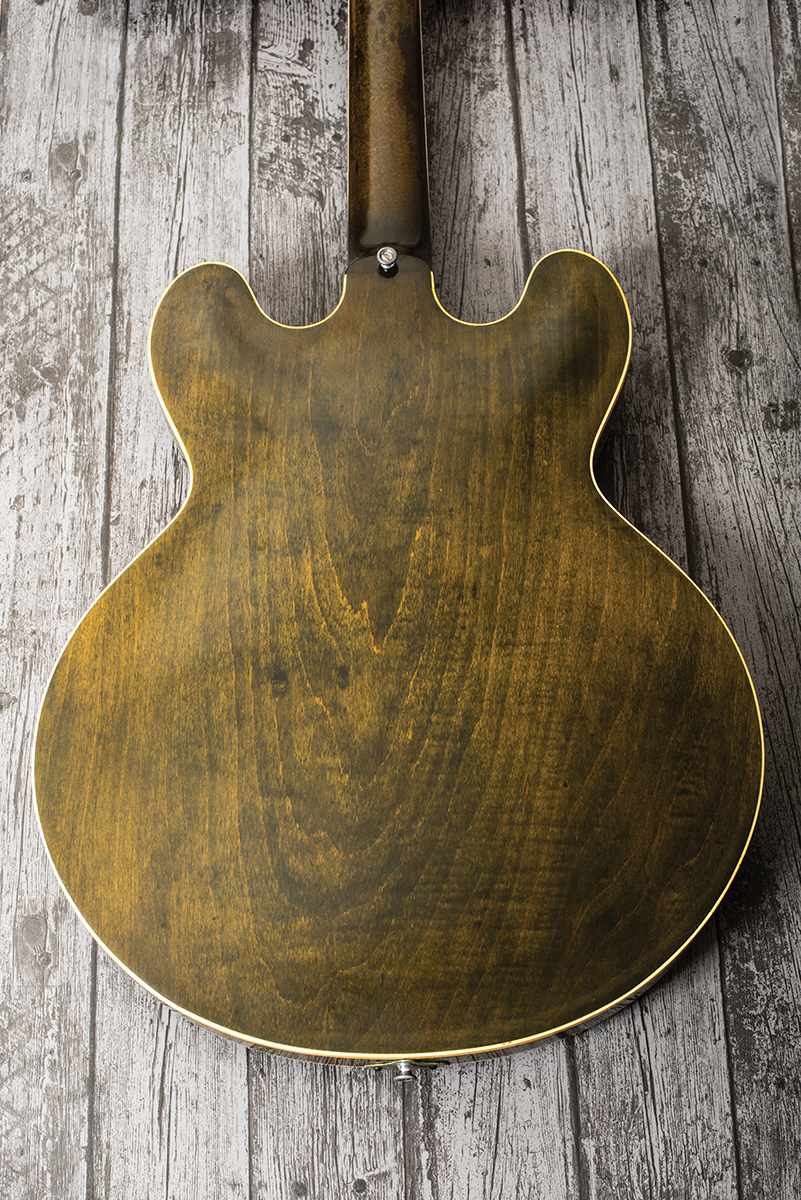 The green hue in the Royal Olive finish extends to the back, which would have been brown on regular Sunburst models

Like any vintage hollowbody, controlling feedback can be something of a challenge at stage volume levels, but when you do strike a balance, you are rewarded with musical and moreish feedback and effortless bloom. 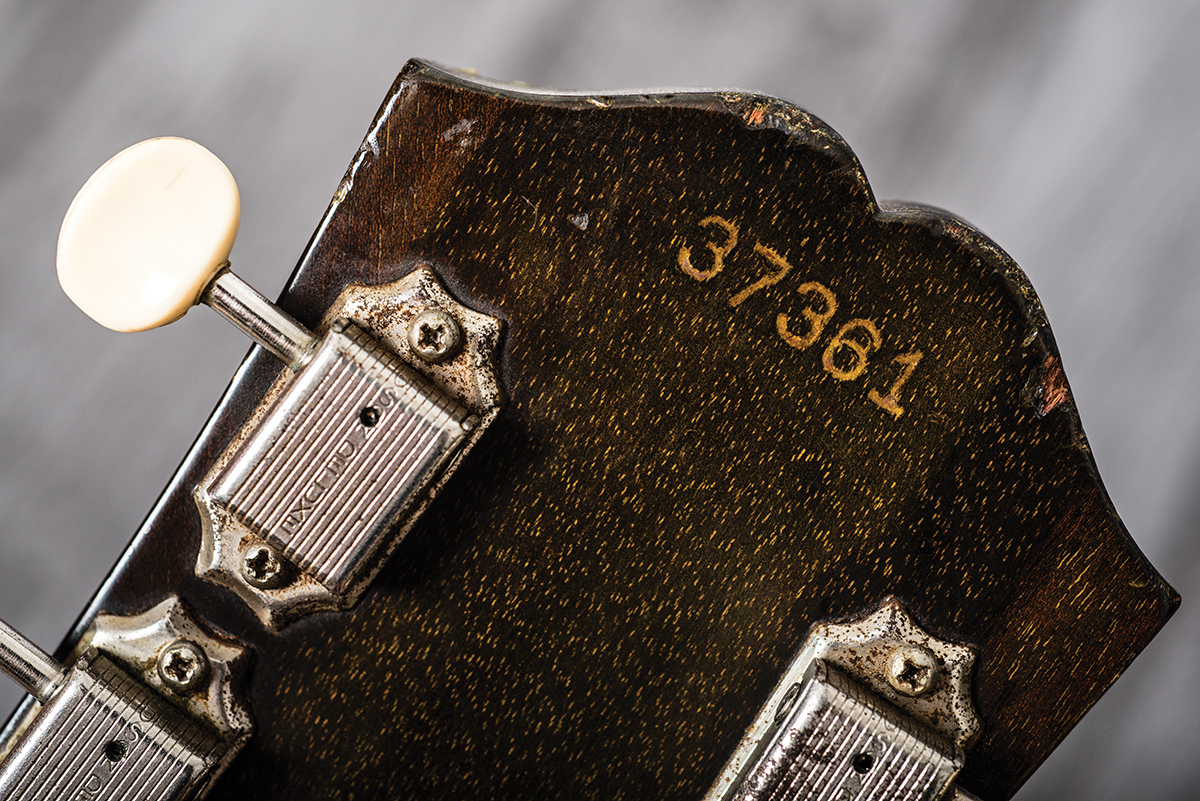 ealing to the collector than the real-world player, but it would be a shame if this guitar didn’t end up in the loving arms of someone who uses it to create music for decades to come. It really is a delight to plug in. 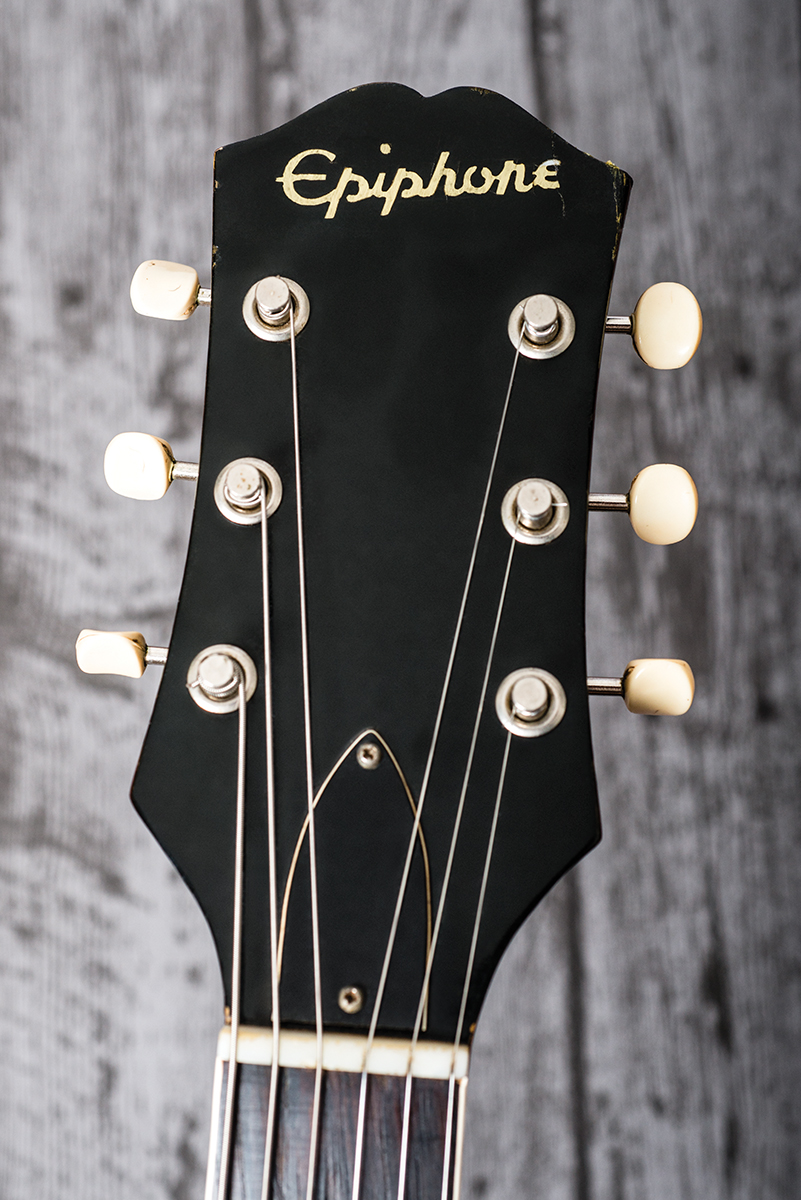