Its name may have unsavoury connotations, but don’t let that put you off – this might just be the bargain vintage amplifier you’ve been looking for. 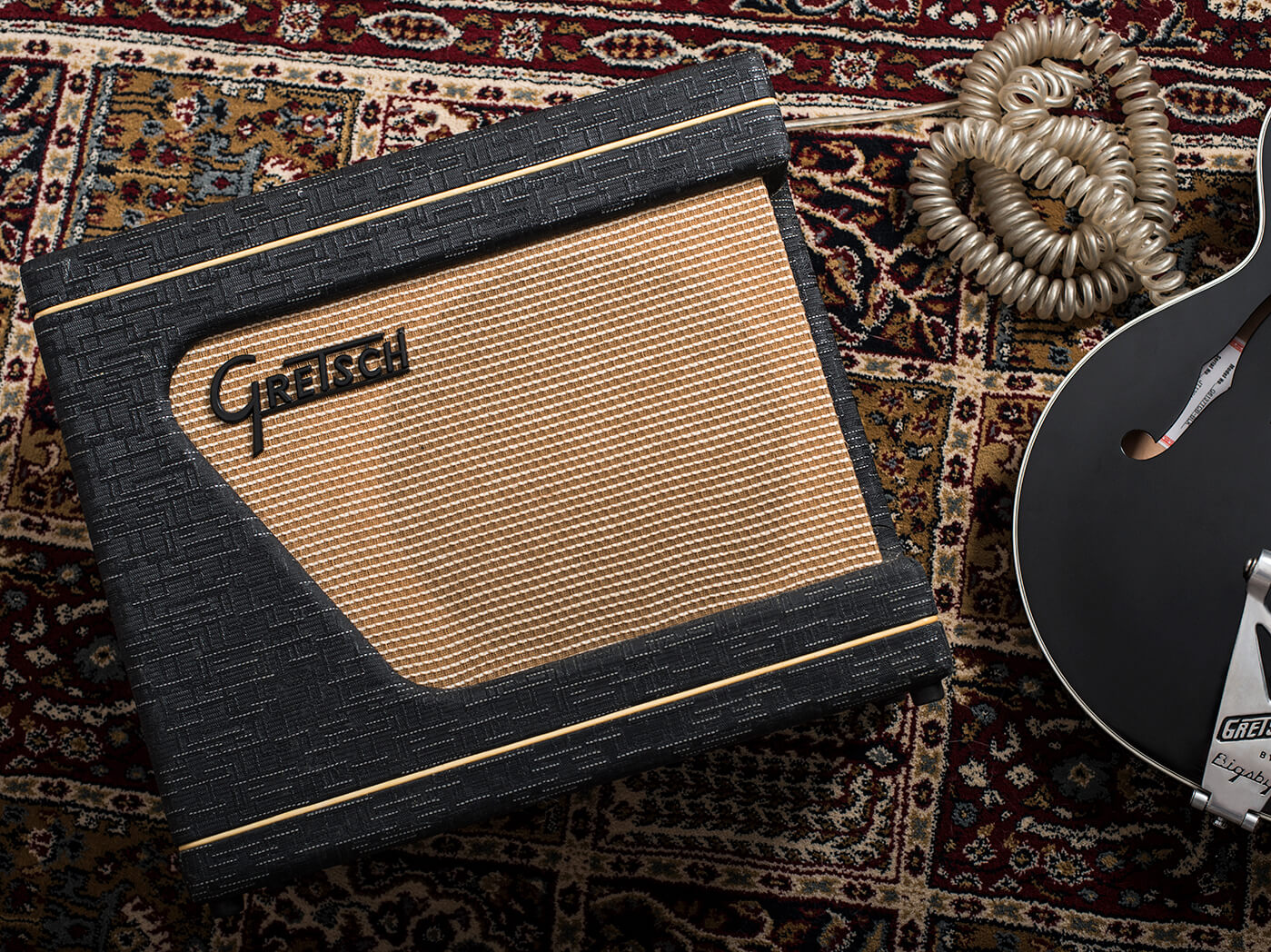 When vintage Strat and Telecaster values started climbing in the late 1980s and early 90s, some discerning players turned to Jazzmasters, Jaguars and Juniors as cheaper alternatives. So far, the same phenomenon hasn’t occurred with amplifiers. Collectors may be snapping up all the great Fenders, Voxes and Marshalls, but there are still vintage bargains from other makers to be had.

This 1961 Gretsch 6156 Playboy is a case in point-to-point. The cabinet is just a little smaller than a tweed Deluxe’s and there’s a 10-inch Jensen C10R speaker onboard, but we’re talking about 18 watts of 6973 valve power with vibrato, too. 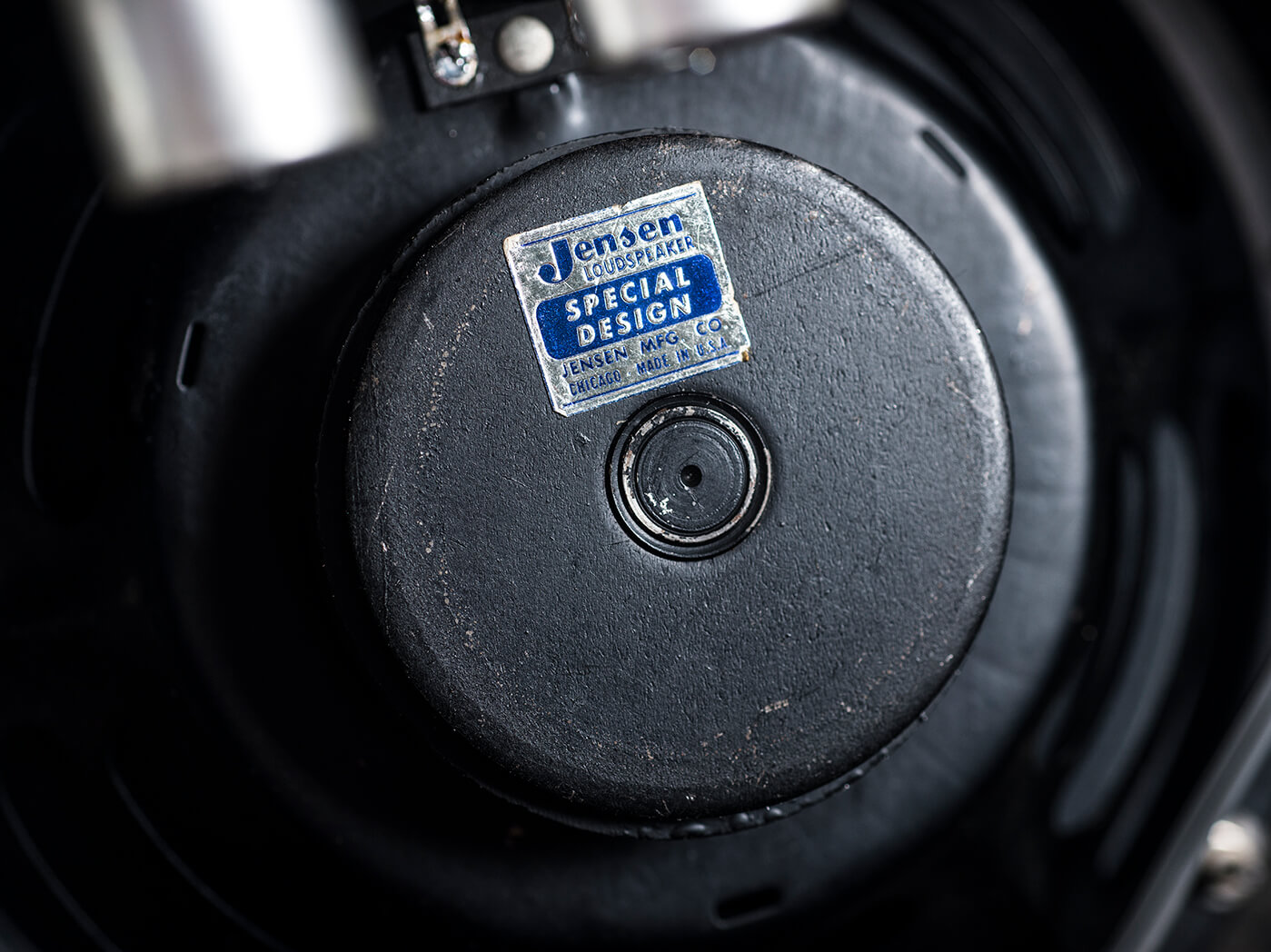 The 6973 power valves may seem unfamiliar, but we recently reviewed a Supro 1696RT Black Magick that also featured them. These power tubes may or may not have been fitted in Jimmy Page’s fabled Supro, but we like them a lot. They were mostly used in hi-fi and jukebox amps rather than guitar amps, and although the 6973 looks like an EL84, it’s quite different.

Comparing 6973s with EL84s, Dave Hunter finds them “louder, chunkier, and just bigger… with firmer lows and a meaty, if not overcooked, midrange”. It’s probably no coincidence that 6973s are found in Gretsch and Supro amplifiers, because Valco built amps for both brands. 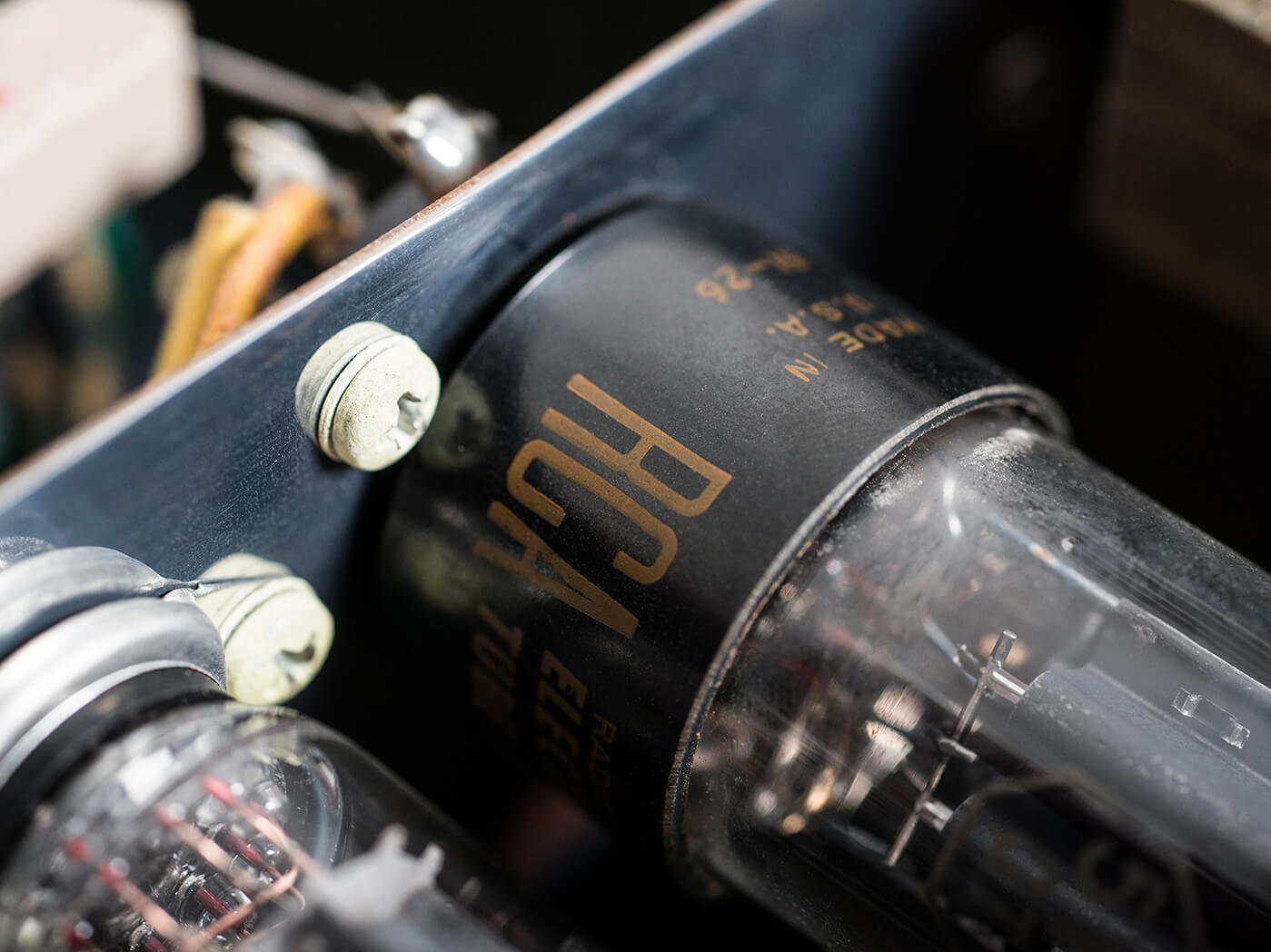 Judging by the speaker code and the chrome control panel, we’d date this amp to 1961, although the model itself was introduced in the mid 1950s. Given that it’s a mint example, it’s reasonable to compare the build and finish to Fender amps of that era.

As much as we admire vintage tweeds, this Gretsch looks and feels like a higher quality amp. It must have appeared more modern at the time, too. The textured covering epitomises mid-century chic and the contrasting white (now cream) piping is a classy touch. Then there’s the handle, which has the same covering as the amp on the underside and a chrome strip across the top to match the control panel. 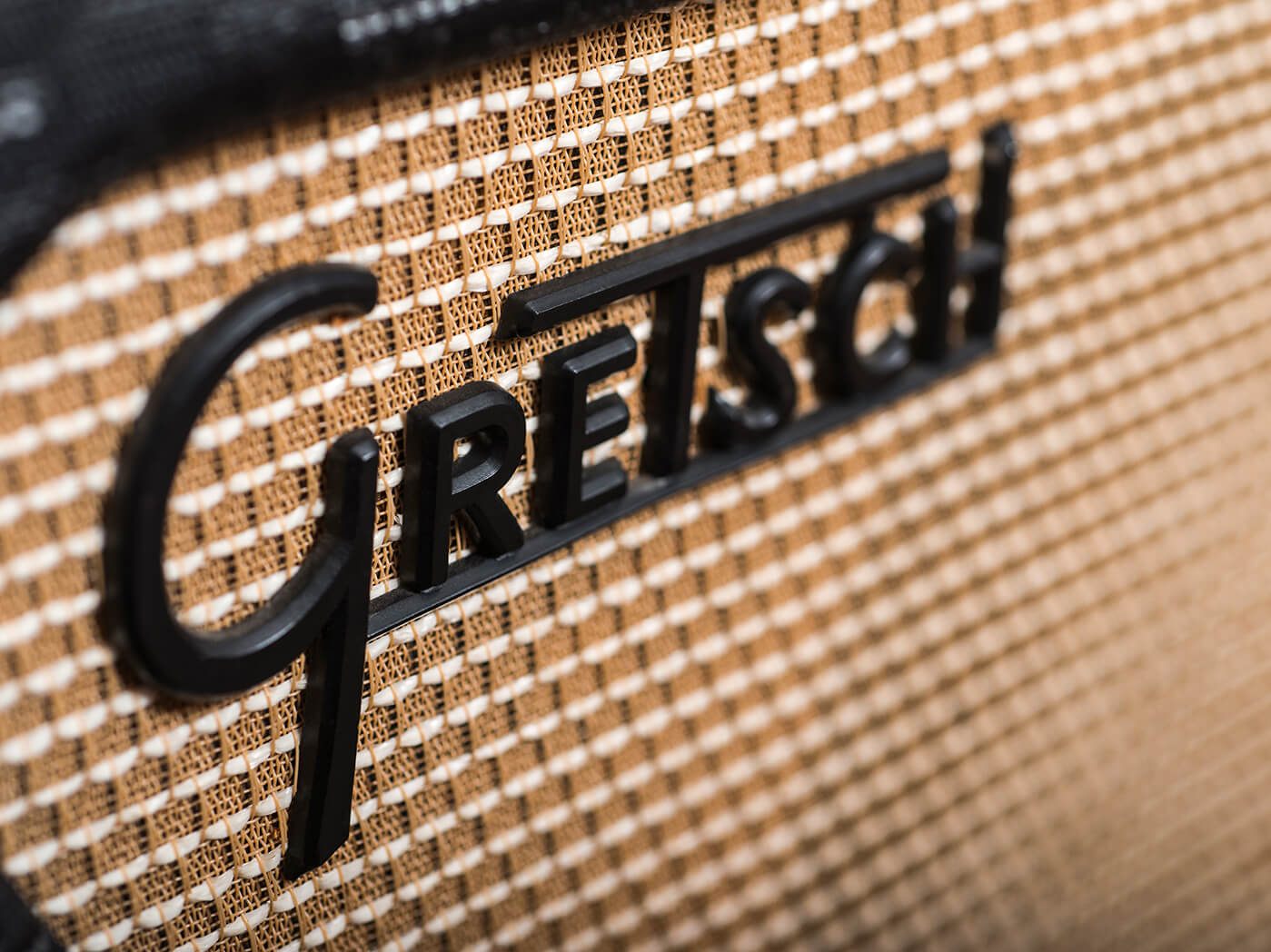 Since Gretsch contracted out its amp work, establishing a brand identity must have been paramount. The G-branded control knobs are identical to those on Gretsch guitars; the aforementioned covering is the same as that used on Gretsch guitar cases of the era and there’s a ‘T-roof’ logo prominently displayed inside the cabinet’s asymmetrical speaker cut-out. 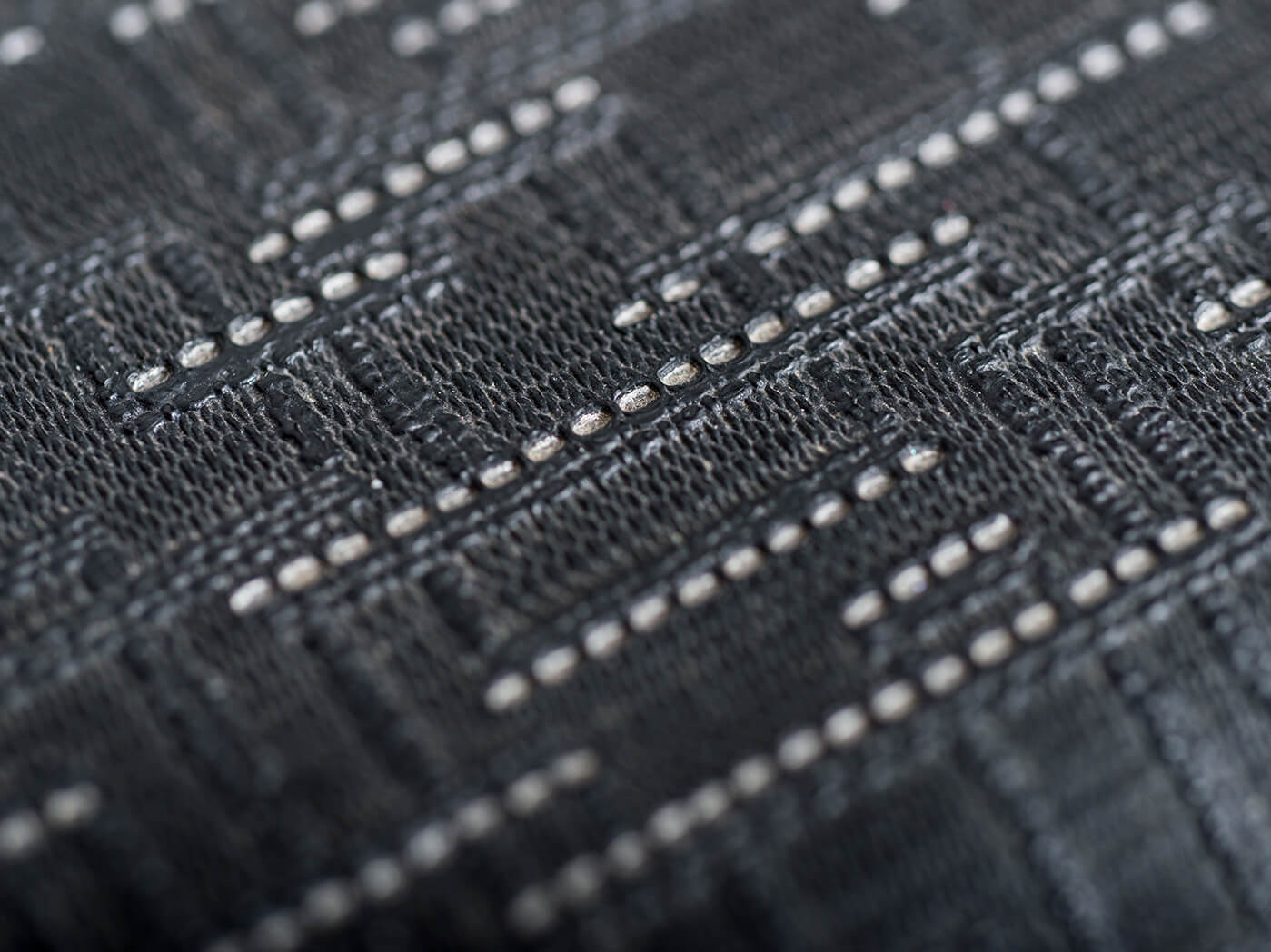 The way that the cut-out continues around the front-right corner is possibly the defining motif of Gretsch amps. Looking inside, we can see a rectangular plywood speaker baffle with a side section attached at a right angle. The wheat grille cloth is stapled flat onto the baffle assembly and then screwed onto the inside of the cabinet.

The silk-screened control panel has a busy look, but there’s not that much going on. The basic controls are simple enough, with just volume and tone to play with. In the centre, there’s a mismatched ‘hand switch’ control knob for tremolo speed that doubles up as an on/off switch for the tremolo effect. There’s also a socket for a footswitch to activate the tremolo, but no control for intensity.

Three inputs are provided – one labelled treble and the others labelled bass. The power switch is a three-way device, which is off in the centre, in standby when moved to the rear and fully operational when shifted towards the front. We haven’t encountered this on an amp from this era before, but it’s commonly seen on modern amps. Strictly speaking, a 5Y3 rectifier valve means that standby mode isn’t necessary for the 6156 circuit, but opinions may differ. 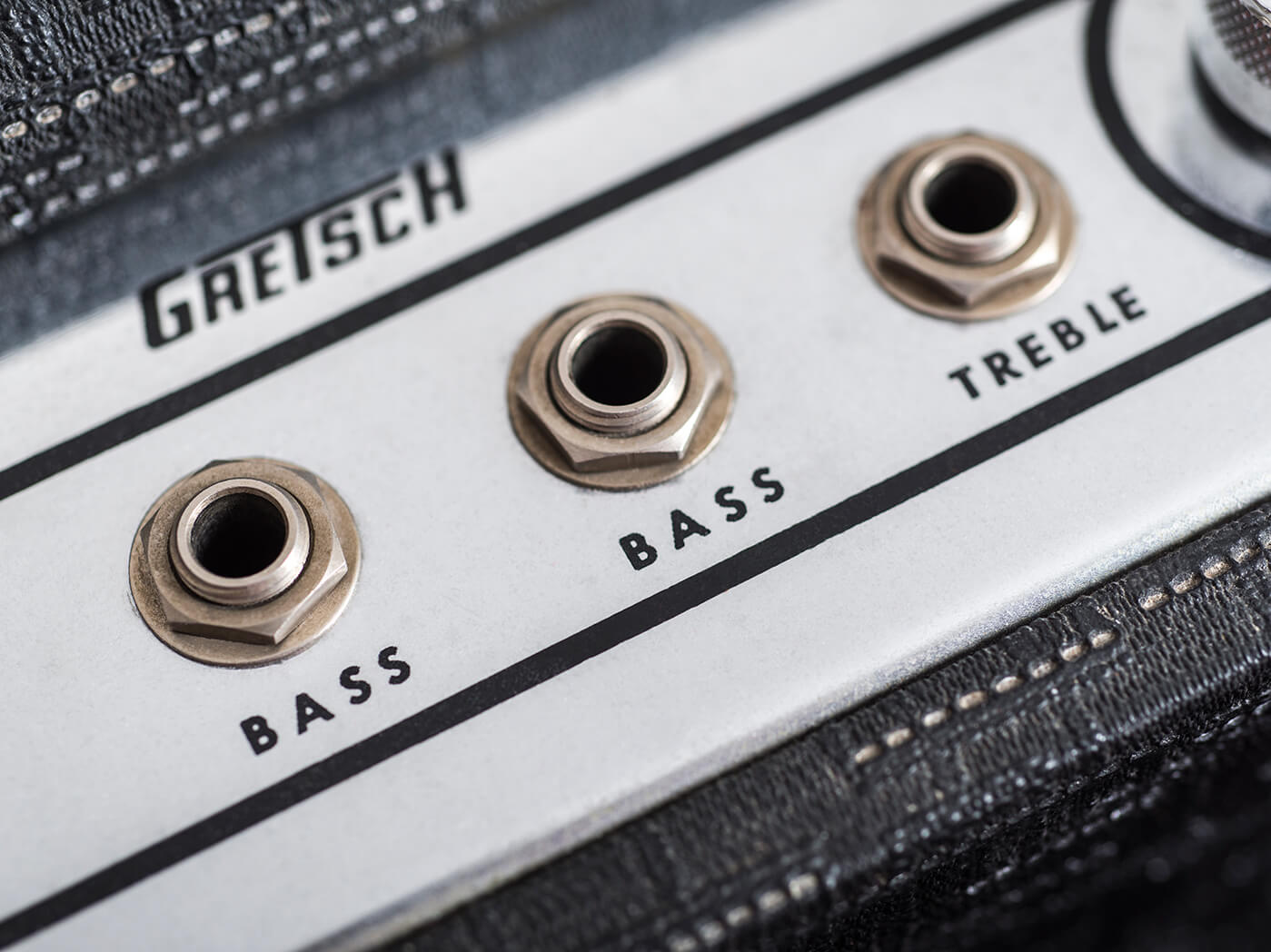 We must also mention the large pilot-light cover. At first sight, it appears like a nondescript dome of white plastic; but when illuminated, mouldings on the underside help to turn it into a pearly, iridescent shell.

Popping off the back panel reveals circuitry that has remained untouched since this amp was built. Using a combination of tag strip and point-to-point wiring, Valco’s construction practices may not provide the easy serviceability and logical layout of a tweed Fender, but the build quality is impressive nonetheless. We see carbon-composite resistors throughout and all the capacitors, besides the electrolytics, are ceramic disk types.

As an all-original vintage amp, it’s no surprise that the 6156 still has its two-prong mains plug, so it’s not grounded and therefore not safe in its current state. As a workaround, we use a jumper wire with alligator clips to connect the amp chassis to our step-down transformer’s metal frame and temporarily ground the amp. This makes it safe enough for testing, but it’s not a long-term solution. 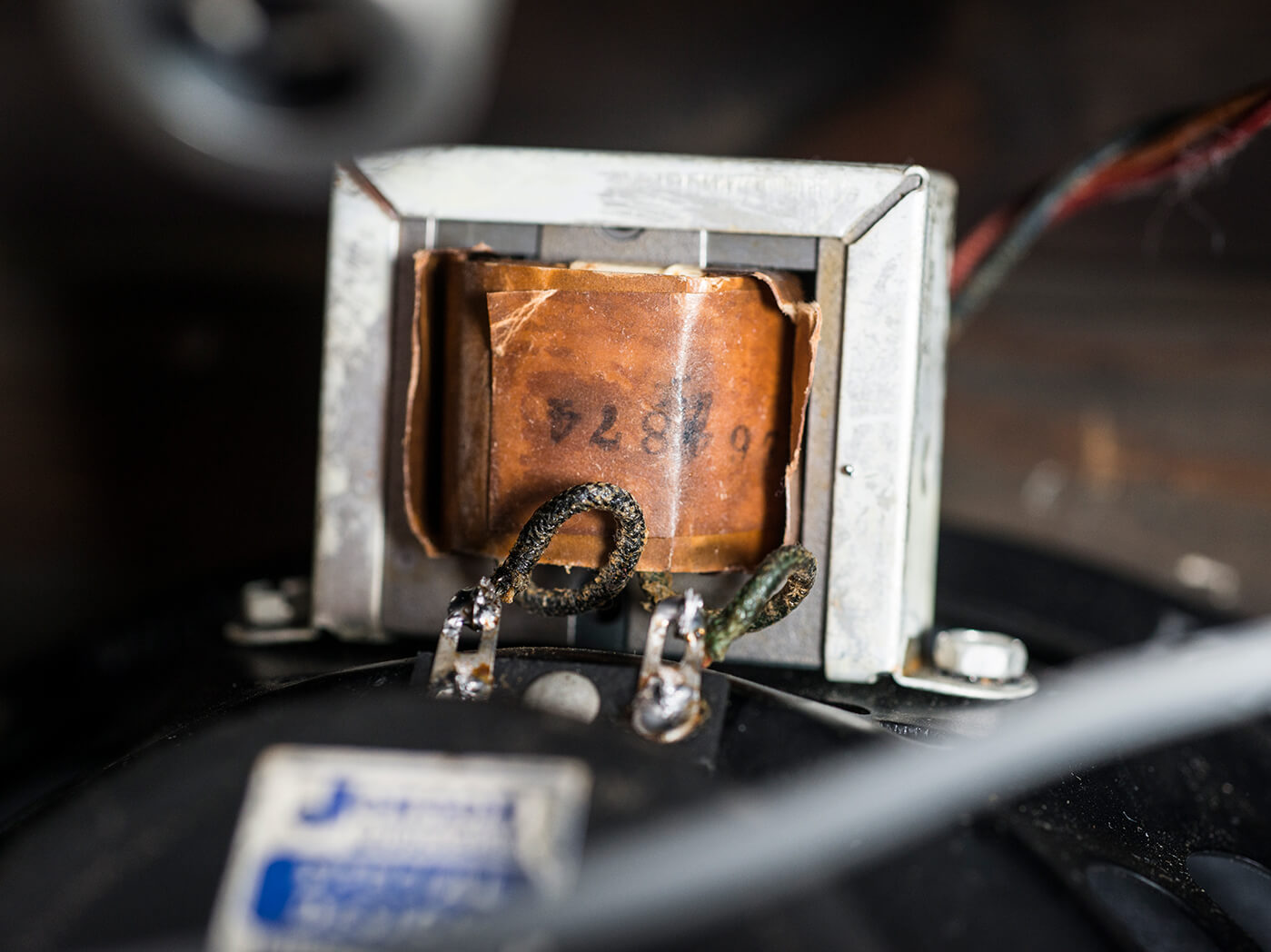 Starting with a Gretsch guitar (naturally) plugged into the treble input, it’s immediately noticeable how much brighter the 6156 sounds than the aforementioned Supro Black Magick. The midrange is also less prominent and at low-to-medium volume levels, the 6156 has a very clear and transparent tone. 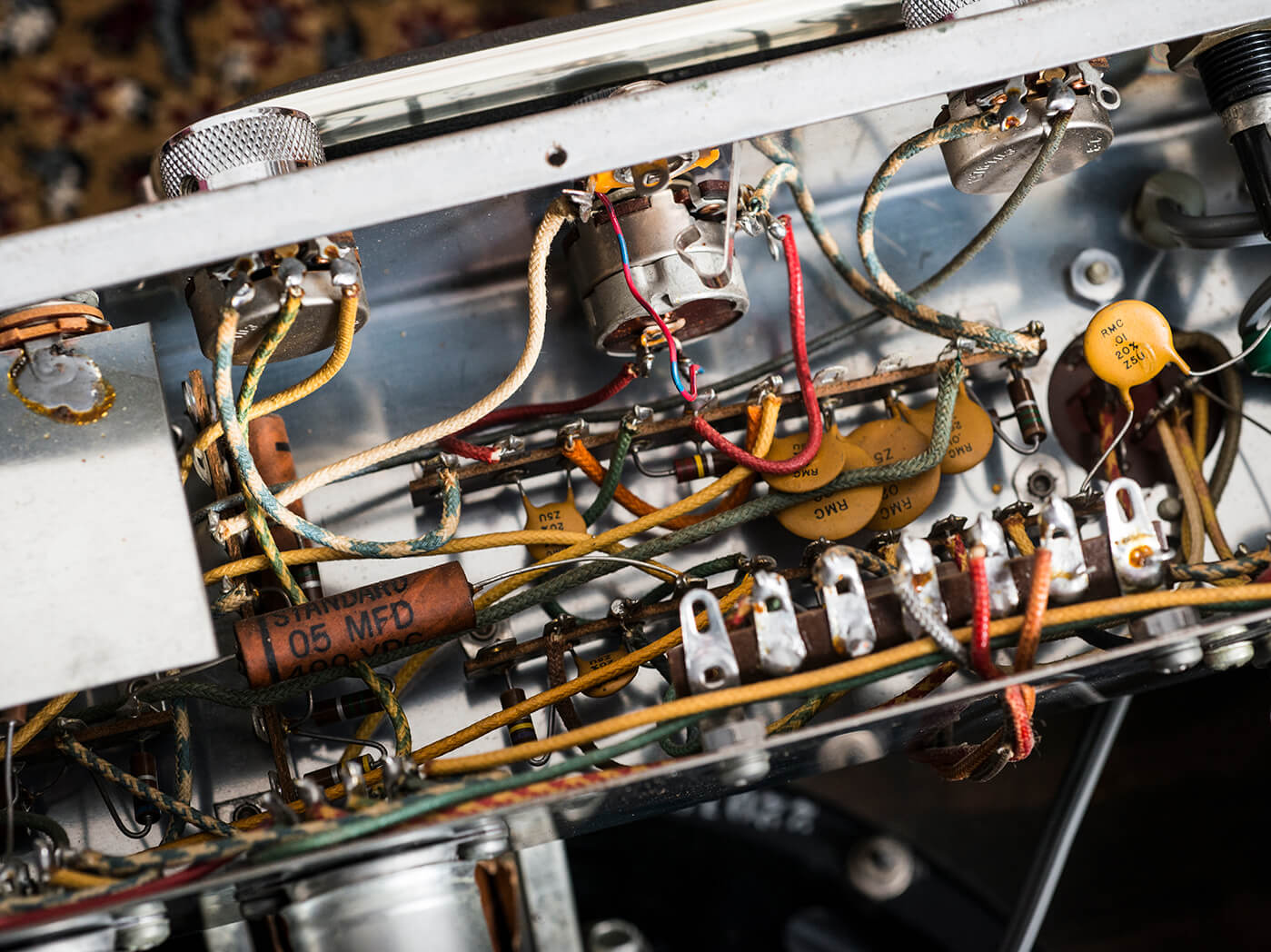 The level is pretty much identical when you plug into the bass input, but the thicker mids contribute a really enjoyable growl as the 6156 begins to overdrive – there’s no need to keep the tone control set low. The overdrive character is also smoother and less raspy, going from garage punk to classic rock. 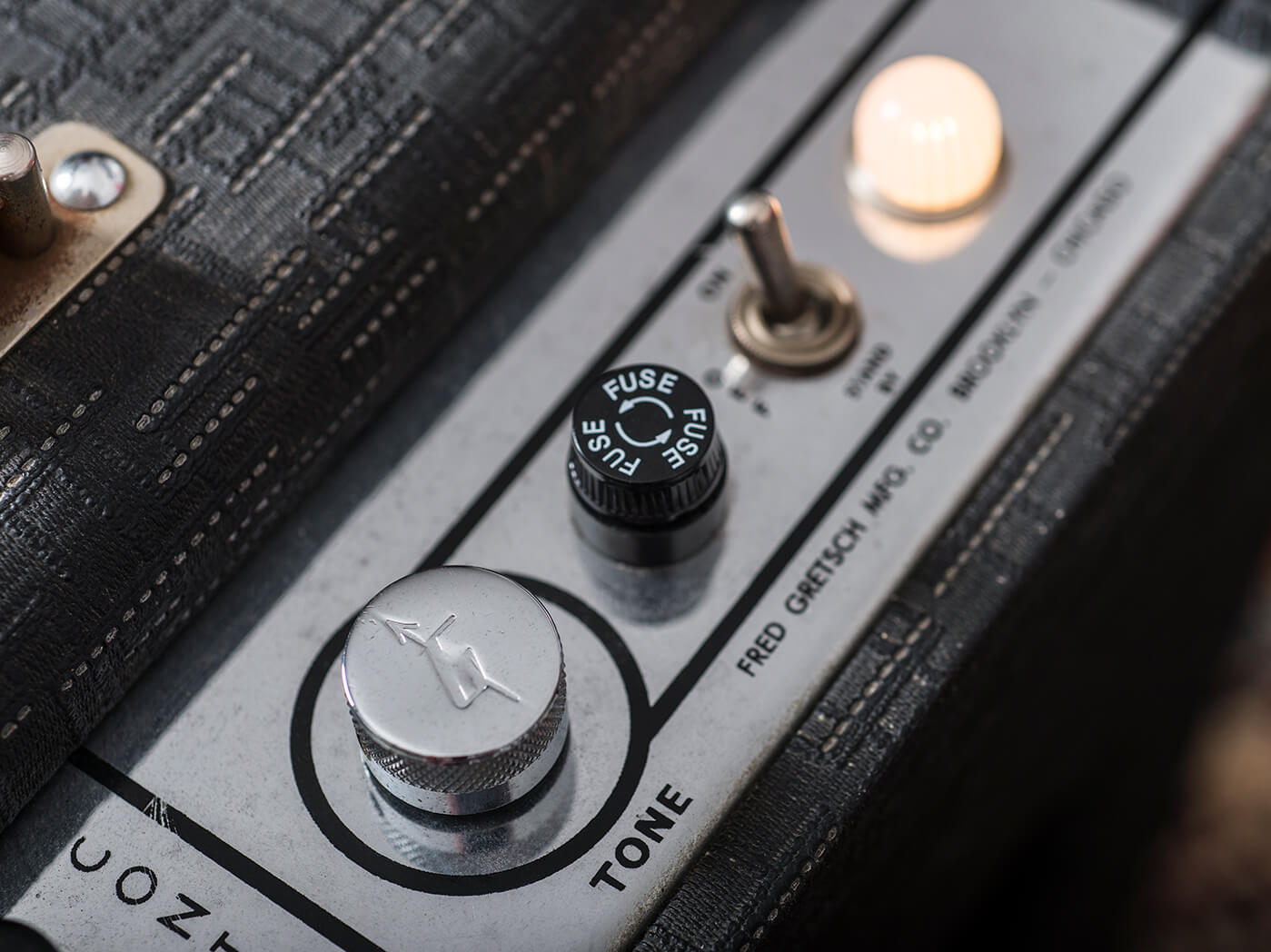 Swapping over to a P-90 loaded Goldtop and raising the volume towards maximum, the 6156 eases into a creamy overdrive that sounds a lot closer to the Supro. It’s not the ferocious fuzziness of a late-50s tweed, but if you prefer harmonically richer overdrive with more buttery smoothness, the 6156 can oblige. Our only concern is the speaker, because we hear it struggling at maximum volume.

The tremolo manages to be both pretty and swampy and it’s one of the nicest amp trems we’ve heard. The speed range isn’t the widest, but it matters little and our only complaint is the absence of an intensity control. If we owned this amplifier, we might consider ditching the footswitch socket and installing an intensity control in its place. 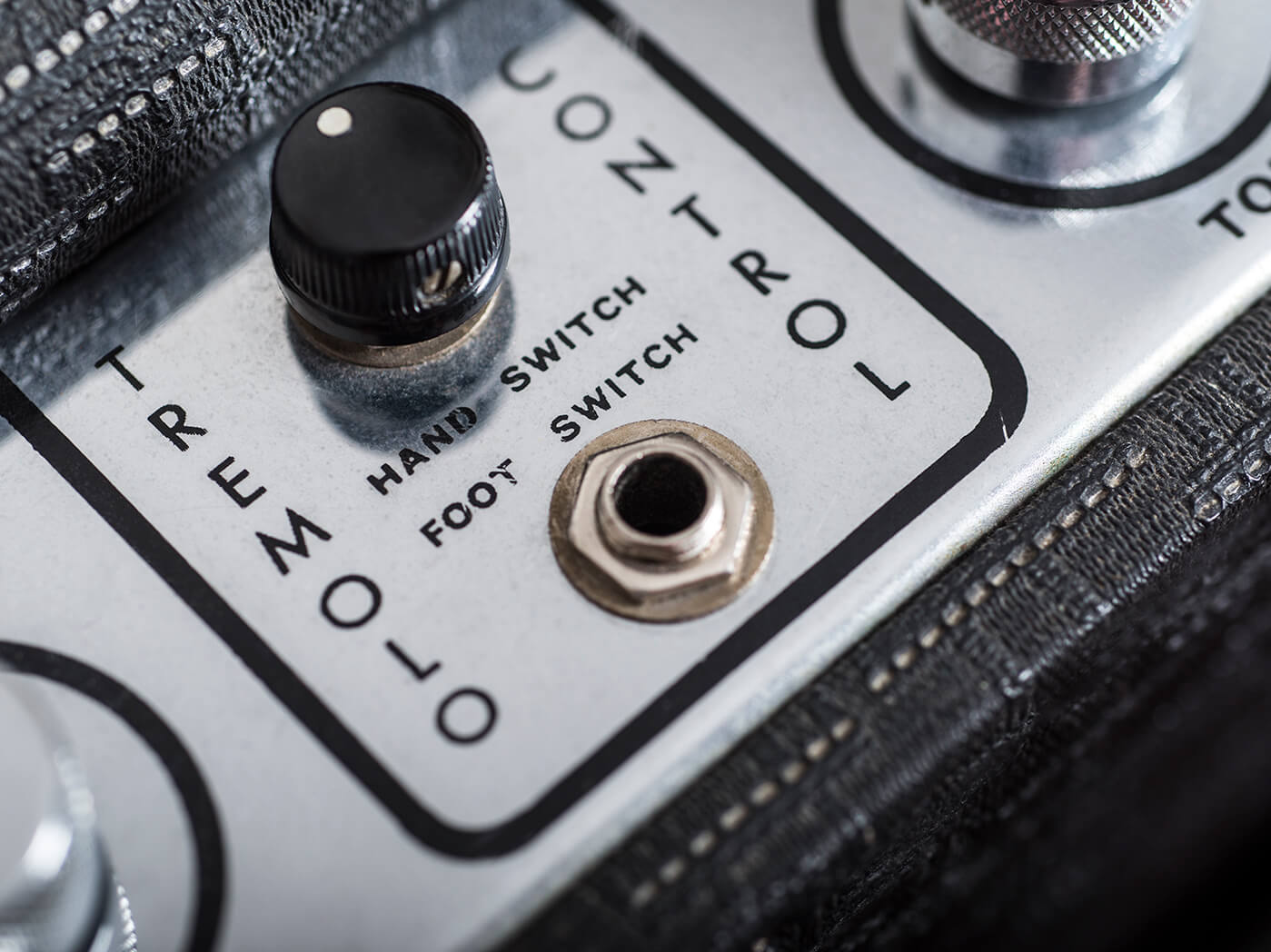 It’s already a fabulous amp, but with a couple of sympathetic mods, we think the 6156 could be punching it out with the heavyweights. When you consider that highly original and mint Gretsch amps are still available for about half the price of similarly powered pristine Fender tweeds, perhaps it makes sense to buy one while you still can.