Like the V and Explorer before it, Gibson’s 60s Firebird range was a radical rethink of the possibilities of guitar design. Of the many Firebirds over the years, the VII is regarded as the pinnacle. 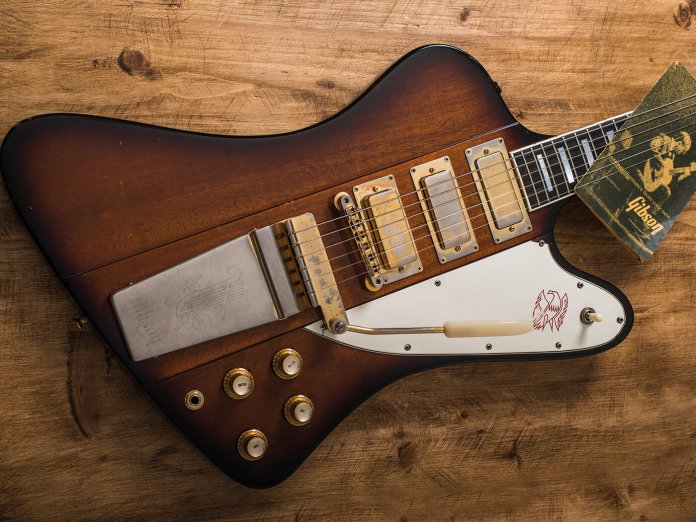 Although Ray Dietrich’s Firebird may appear on the surface to be a toned-down version of the Explorer, it’s actually a more radical design. Even today, through-neck guitars are hardly commonplace, so in 1963, the Firebird’s construction was truly groundbreaking. The VII we have here is characterised by its three mini-humbucker pickups, an ABR-1 bridge and a Maestro Vibrola – and as befits a top-of-the-line model, all the hardware is gold-plated, too. 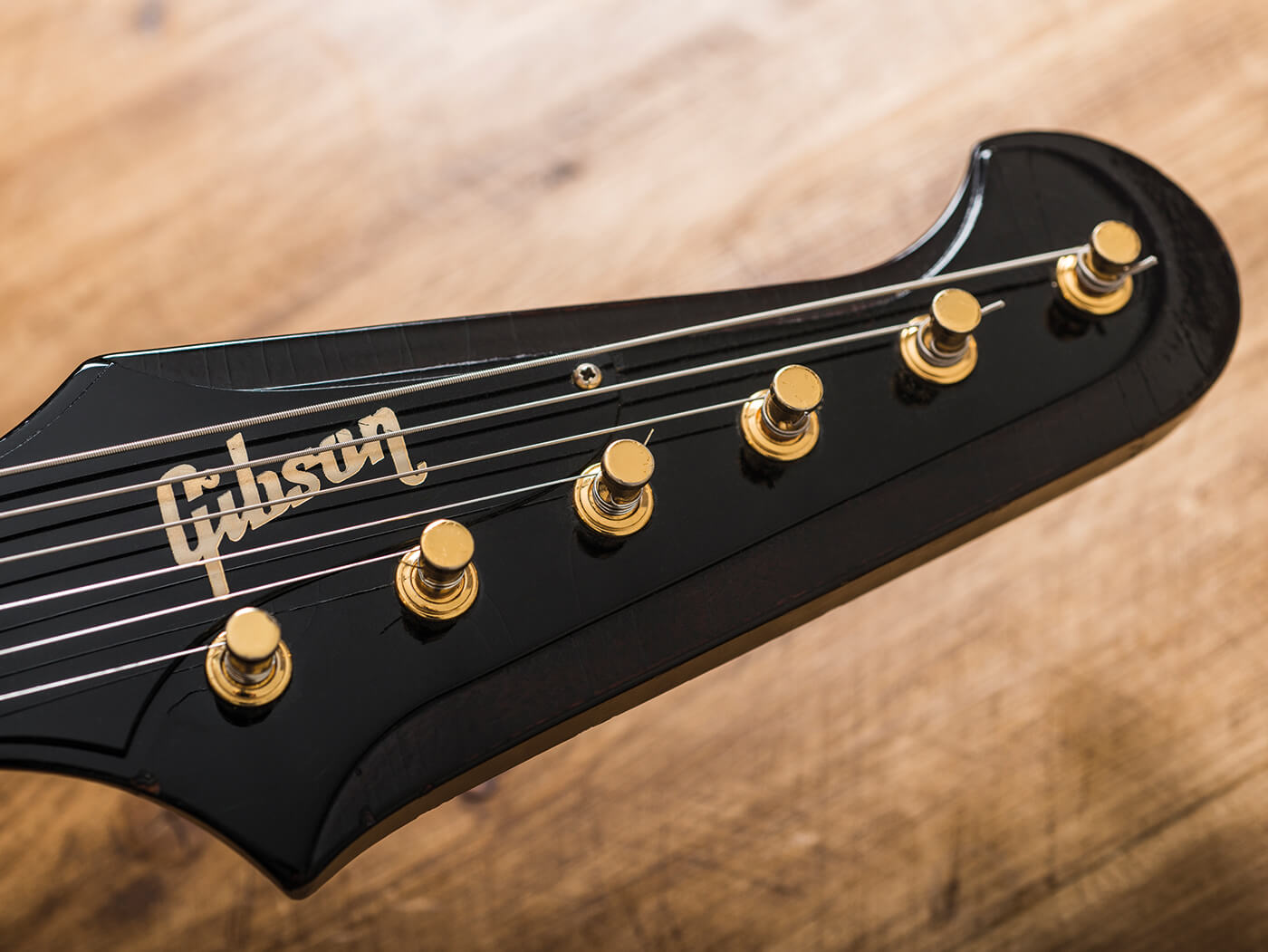 This example’s overall condition is wonderful; it’s clearly been well played and there’s lateral lacquer checking all across the body, neck and headstock. On the back, the finish is a fairly uniform tobacco brown, with the mahogany grain clearly visible – especially where it’s slightly lighter on the back of the neck. At the front, the tobacco brown tips over the edges and the sunburst transitions to a more amber centre, with a hint of redness at the crossover. The pickguard has a mellow, aged quality, with a touch of wear on the Firebird logo and shrinkage around the screw holes. The hole at the end of the horn has three cracks but is hanging together, unlike the corner in the cutaway, which has snapped off.

On a personal note, this writer has always had a thing for reverse-bodied Firebirds. Maybe it’s an affection for Southern rock – or perhaps it was that Firebird on the wall of a long-vanished music shop he once ogled but never dared to try as a teenager. Finally having the opportunity to spend some quality time with a Firebird VII, he’s now forced to admit that they make him look a bit ridiculous.

If you’re rakishly thin, over six feet tall and have long flowing locks, this guitar will make a 70s rock god of you. But if you look more like a shorter, chubbier and Welsher version of Hugh Grant, you may need to think this one through. Joking aside, though, with reverse Firebirds there are some serious ergonomic as well as aesthetic considerations.

Firebirds are five inches longer than Strats and some things don’t quite line up where you’d normally expect them to be. For instance, there alway seems to be a two-fret offset, but Jazzmasters can be similar – and it’s easy enough to adjust to. Perpetually grabbing the wrong tuner also comes with the territory, but that takes longer to overcome.

The startling imbalance caused by the sheer mass of those banjo tuners obliges you to hang on for the ride at all times. It’s little wonder that this specimen must be one of relatively few to have survived the last four decades without a headstock repair: from both a playing and ownership perspective, this is a guitar that demands some commitment.

That said, everything else about this guitar makes for a very easy playing experience. The medium-depth neck benefits from soft shoulders and the gentle heel carve combines with a deep cutaway to make the ebony fretboard ‘access all areas’. It’s a super-smooth surface and, with plenty of life in these frets, string bends feel effortless.

Although some attempt has clearly been made to set the intonation, some saddles are at their limit and yet the intonation is still slightly off. There may be some scope for improvement if some of the saddles are spun around, but it may be that Gibson simply installed the bridge too close to the neck in the first place. The company had form on this, which is why some vintage Gibsons – 50s ’Bursts included – have been modified with relocated post holes.

The vibrato is fun, and you get about as much pitch fluctuation as you would with a Bigsby-equipped Telecaster. Adding gentle vibrato to chords and bent notes is fine, and so long as you don’t get crazy, the tuning holds true.

The unplugged tone promises great things and it’s way more complex than a slightly later non-reverse Firebird we have on hand to compare. It has a similarly dense harmonic ‘sprang’, but there’s also some of the nasal woodiness we tend to associate with semi-acoustics and really resonant Les Pauls. The Firebird adds something of its own, too, with deep but clear lows, surprisingly chimey treble and the sort of sustain that through-neck construction promises, but often fails to deliver.

It’s remarkable how much of the acoustic character comes through these mini-humbuckers. There’s a touch of microphony, which no doubt helps, combined with extended treble and a serious bit of poke. Common comparisons to Strats are largely based on the Firebird’s brightness, but this is a loud, clear and powerful guitar that has its own creamy and vocal character.

Spend a minute on the bridge and you’ll understand why Allen Collins favoured a Firebird to cut through Skynyrd’s three-guitar line-up – even if he did have a P-90 in the bridge. We have rarely heard so much punch from a neck pickup and although it’s set low in the body, it produces just as much level as the throatier and more wiry bridge. Both pickups provide an intriguing mix of sonic power and transparency, and they offer great dynamic response.

We’re not entirely sure if we have a handle on what the middle pickup is doing, because there are some intermittent electronics issues. Initially, it sounds like it’s wired out-of-phase with the others, which proves to be a fabulously funky but meaty tone. Then things begin going awry, the middle setting eventually cutting out, but the guys at ATB Guitars will doubtless remedy any wiring issues ahead of a prospective sale.

As cool as Firebird VIIs are, we’re not convinced that the funky middle setting and some of the other interesting sounds we get to hear (all too briefly) warrant the added clutter and complication of the controls. Although we suspect we’d enjoy a twin-pickup Firebird V or perhaps a Firebird III even more, this is the top-of-the-range Firebird… and it’s a wonderful example.