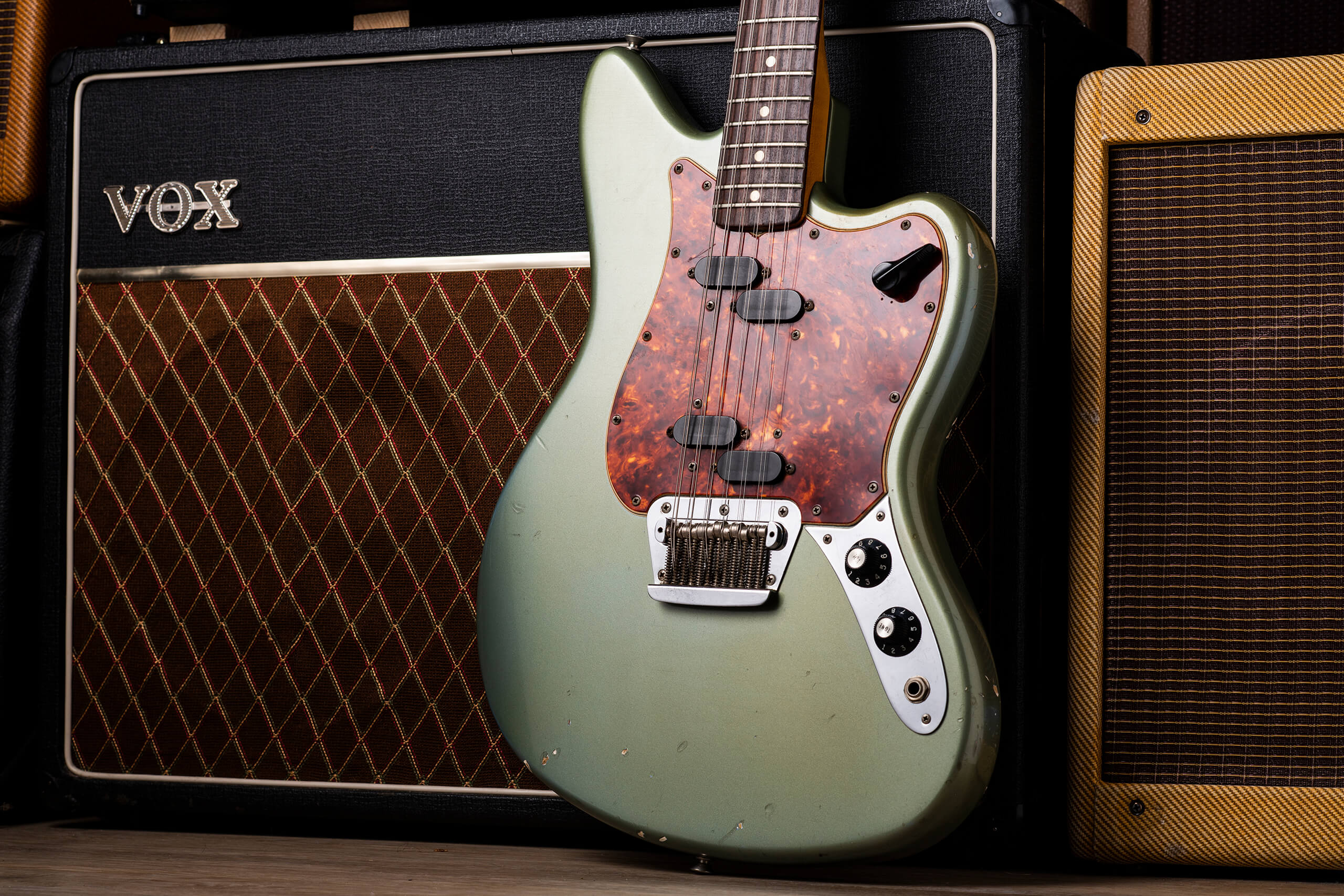 The Electric XII was only manufactured from 1965 to 1970, but its contribution to the sonic legacy of guitar music is significant.

Unless you’ve recently beamed in from another dimension, you’ve almost certainly heard a Fender Electric XII in action. From Pete Townshend on Tommy to Jimmy Page on Beck’s Bolero and of course, Stairway, plus numerous classic recordings by Tim Buckley, Tom Petty, The Velvet Underground… the list goes on.

This Electric XII comes in a rare custom colour and has sounds to die for but before we get into that, let’s take a closer look. The model was introduced in the summer of 1965 and sometime in 1966 Electric XII necks acquired white binding. Pearloid dot markers and an unbound rosewood veneer board indicate that this is a fairly early example and a November ’65 neck stamp provides confirmation.

Blocks replaced dots in the summer of 1966, but the vast majority of Electric XIIs we’ve seen appear to have unbound necks with dot markers. By 1968, Fender moved to a black decal and ‘F’ stamped tuners. This example has had later tuners retrofitted – screw holes for the original Klusons can be seen on the back of the headstock  beside the outer units.

“You get a sense of how the colour originally looked on the headstock, where the decal has shielded the clear coats from UV light”

Other than that, the only things that appear to have been changed since this guitar left the factory are the strings. It’s a lot less fiddly to string up an Electric XII than that other mighty electrified 12-string, the Rickenbacker 360/12, but at the headstock end, you do need to thread the six inside strings through small holes in the string retainer. 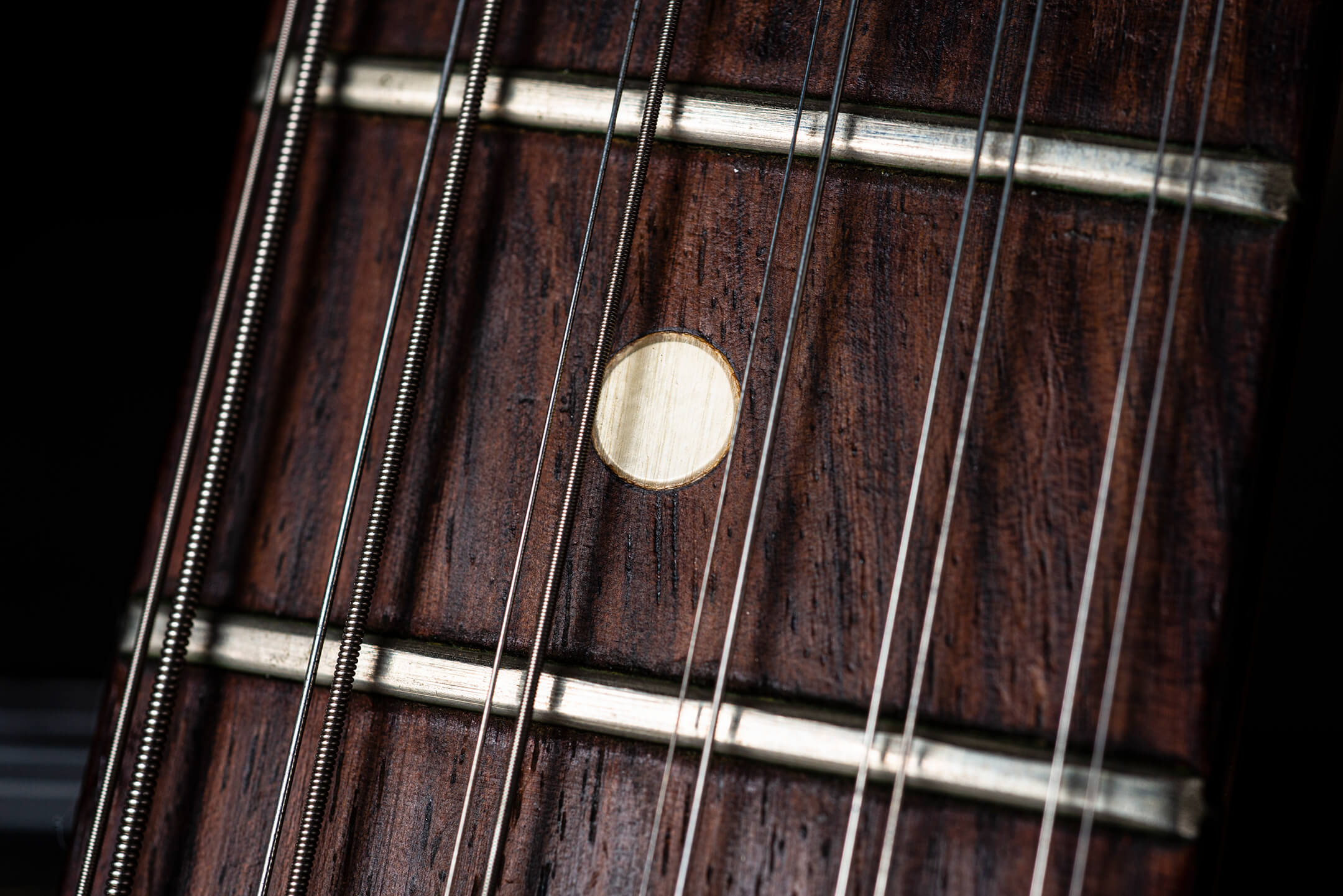 Leo’s concept for a fully intonatable 12-string bridge has never been bettered. It’s compact, easy to adjust and fixes the sting spacing. Each cylindrical saddle differs in diameter to achieve the desired string arc and the action is set via a screw at each end of the bridge plate.

As is occasionally the case with vintage custom colour Fenders, the name of the finish is more applicable to the way the guitar originally looked than the way it looks now. What was once Blue Ice Metallic has become a light metallic green, but we think it looks absolutely amazing all the same. 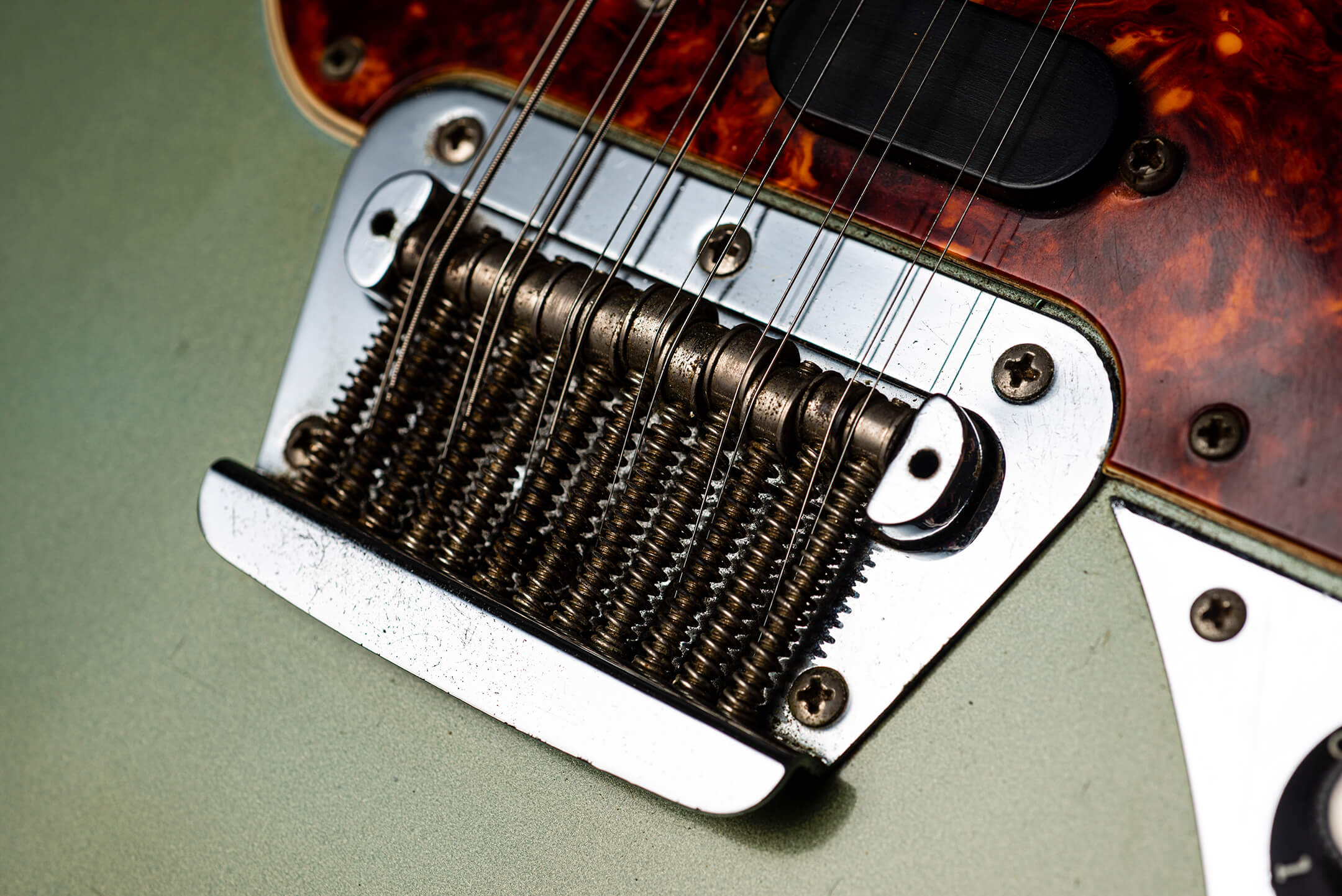 You get a sense of how the colour originally looked on the headstock, where the decal has shielded the clear coats from UV light. It’s even more vivid under the metal control plate, where we also find two one-meg potentiometers, a 0.022uF tone capacitor and the signature of the person who wired it up. Sadly, it’s almost indecipherable. 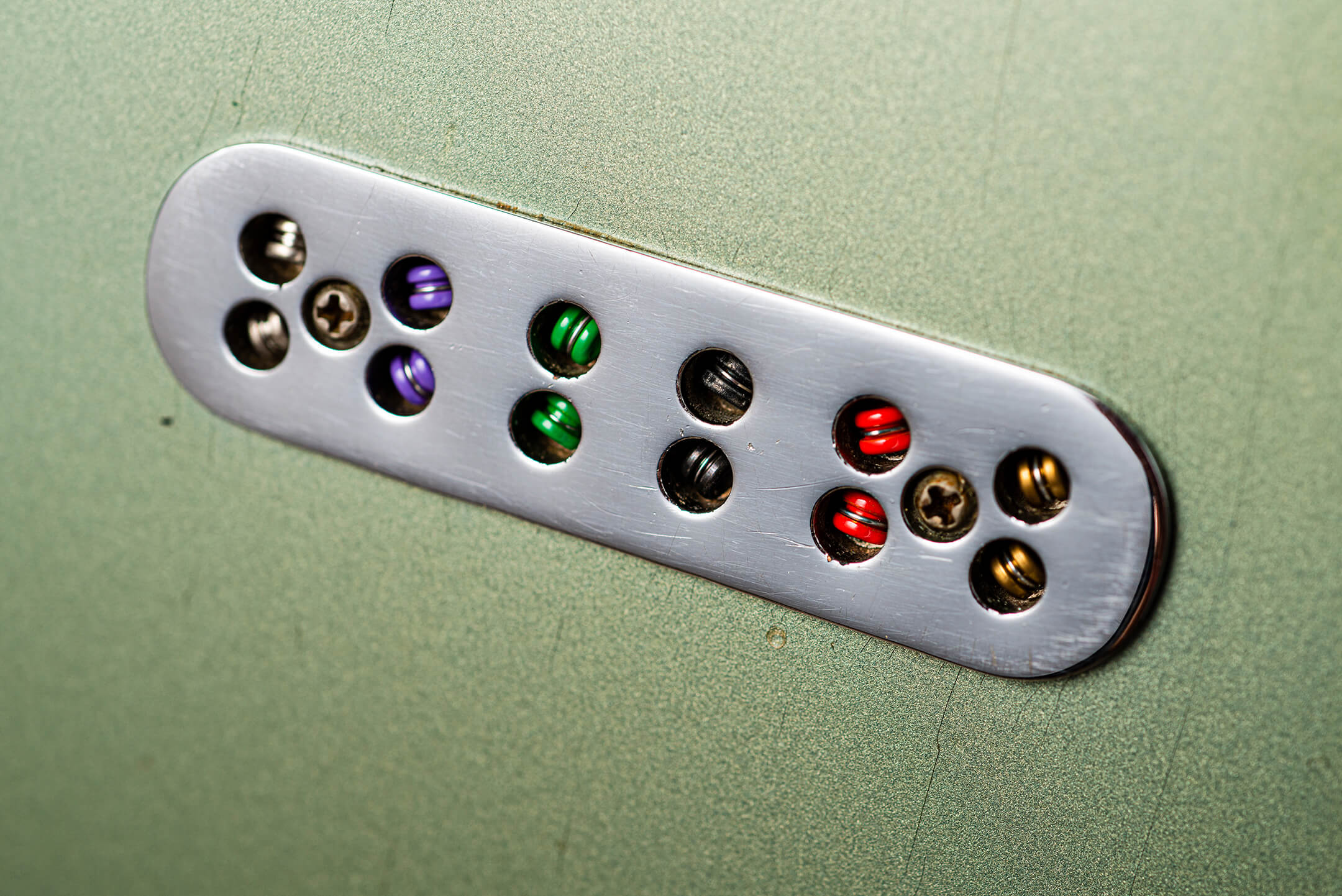 You could describe this as a four pickup guitar because in one of his last designs for the company that carries his name, Leo opted to use two coils for each pickup rather than one – much as he did on the Precision Bass and persisted with throughout his subsequent career with G&L.

Lacquer checking is fairly minimal on the body and matching headstock face, as is often the case with thin nitro over Lucite. Checking is more evident on the back of headstock, which looks pretty amazing, but otherwise the finish is in excellent condition.

The guitar has clearly been played a lot because much of the lacquer has worn through on the back of the neck, but we find it enhances the playing feel – there really is nothing quite like a well-played Fender neck from the early to mid 1960s. 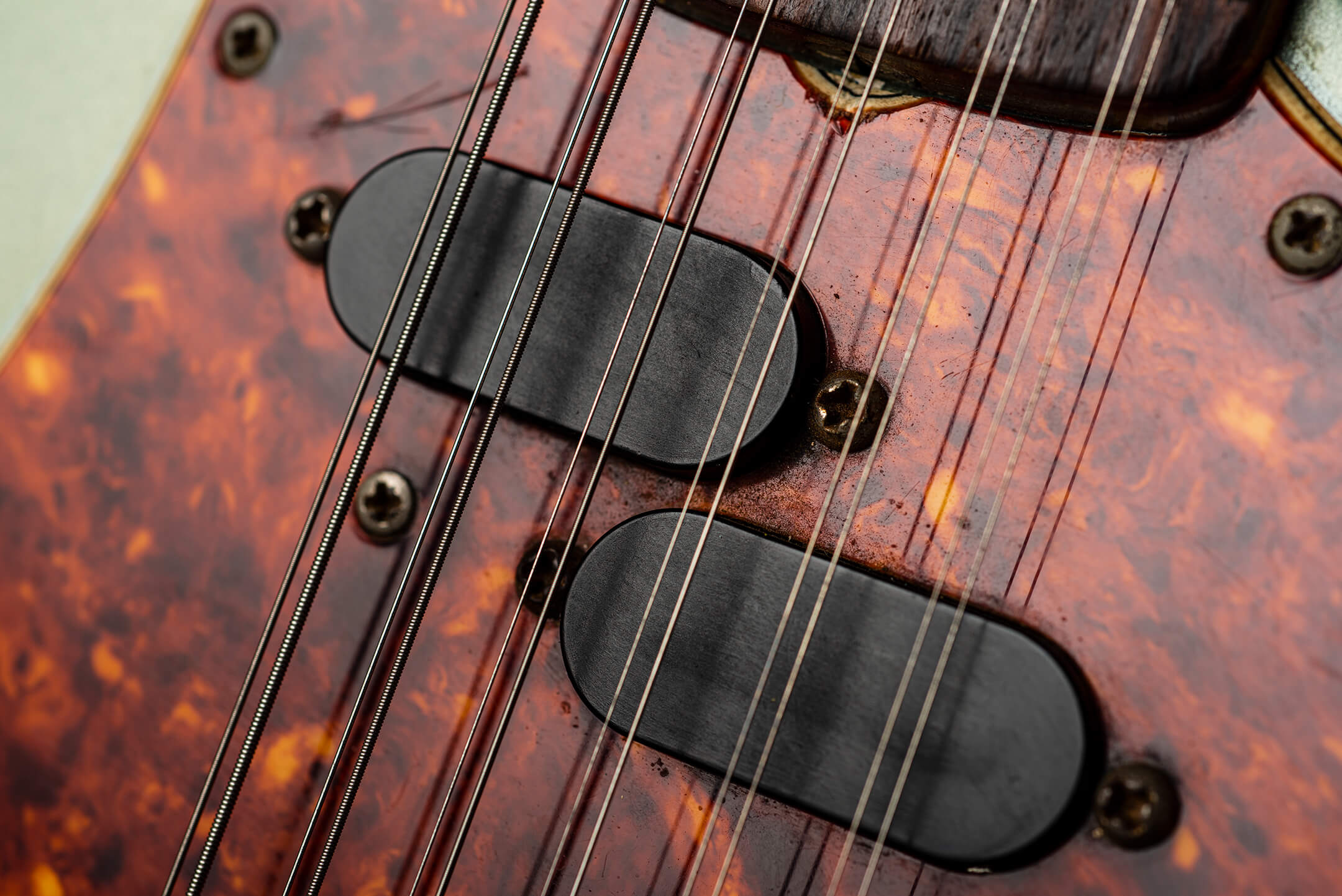 If you’ve never played a Fender Electric XII before – or indeed a Coronado XII – when you do, you will almost certainly be struck by the easy playability. So often 12-string guitars have a daunting action, or the strings are so cramped together they’re fiendishly tricky to play.

In contrast, Fender widened its standard neck for this model and the action is as low as you’d expect on well-sorted Strat or Tele. Granted, you’re unlikely to attempt whole tone bends on this guitar, but it requires little extra effort to play and the wider-than-usual original frets are in great shape. 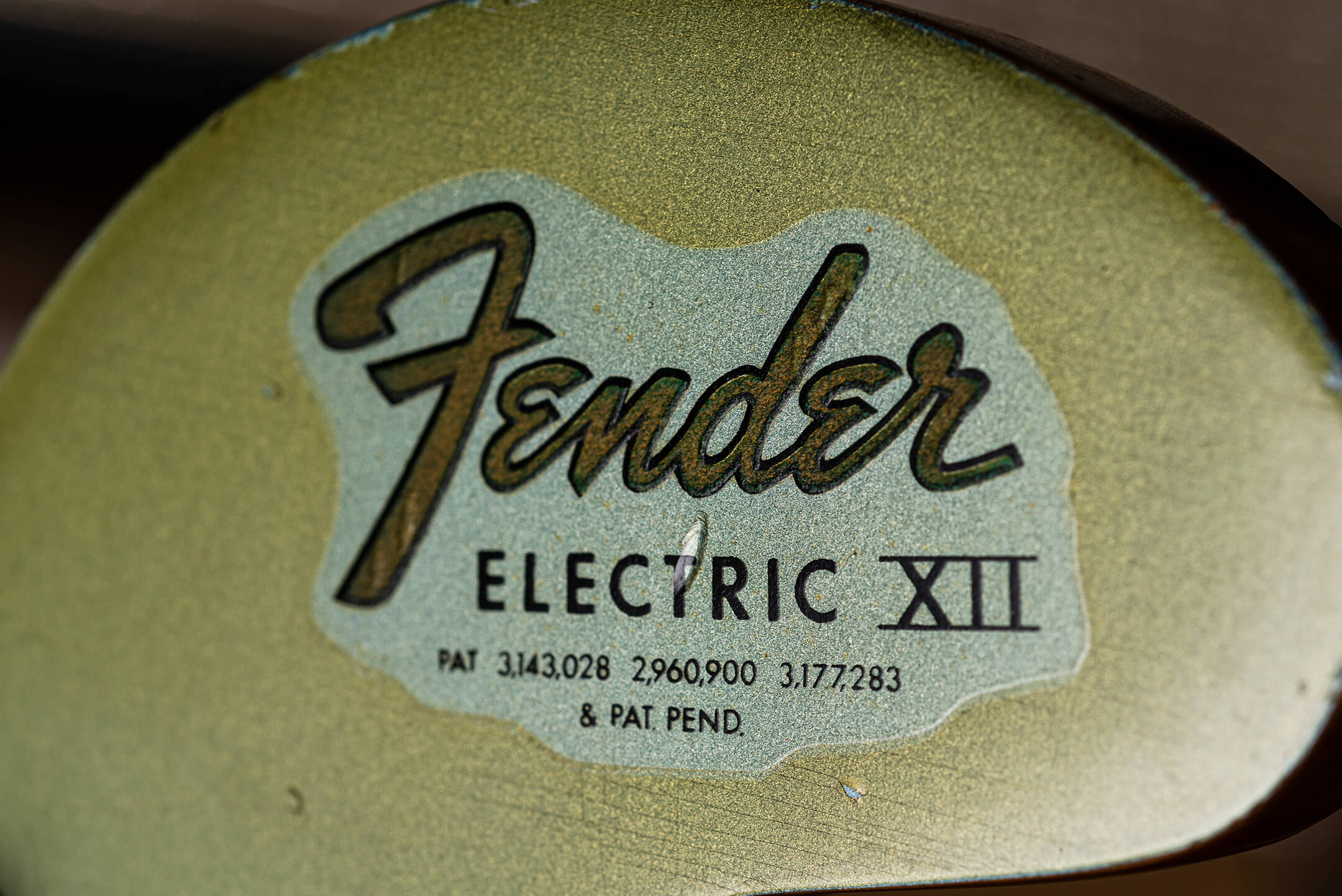 The unplugged tone bodes well, with smooth dynamics, impressive sustain and a wide but balanced frequency response. The intonation is also remarkably accurate and it’s one of those electric guitars that is almost as inspiring to play unplugged as it is through an amplifier.

The volume and tone controls combine with the four-way switch to produce an impressive range of tones. No doubt Fender explored the various possibilities offered by four independent coils, but the arrangement here doesn’t quite tally with the published specs.

The options supposedly include neck, neck/bridge in parallel and bridge only. By lightly tapping the tops of these coils with a screwdriver, we can determine which are active with any given setting. Placing the switch in the down position selects the two neck coils for a fat but chiming tone. The next position activates both bridge coils and it’s instantly recognisable as the setting Jimmy Page used for Stairway.

Following on, you get all four coils, but they’re combined in a way that sounds somewhat out of phase while not lacking in body. Imagine a dreamy electric harpsichord, somewhere in Southern California. The final position takes you back to the two neck coils, and is sonically indistinguishable from the first position. 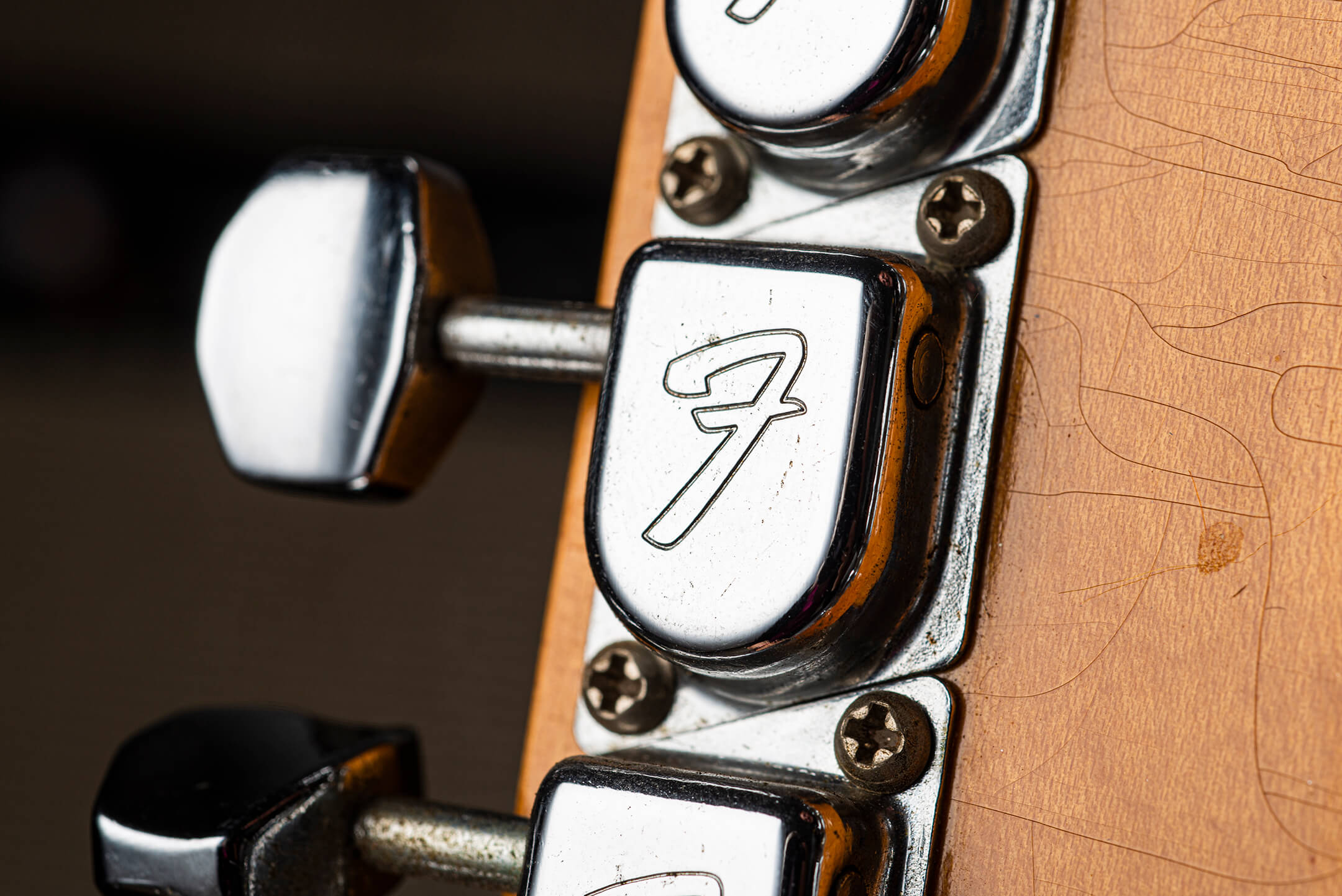 The neck/bridge in series option is therefore absent and since there’s no evidence that this guitar has been modded, we speculate that some earlier Electric XIIs – such as this one – may have left the factory before Fender finalised the wiring configuration.

Nevertheless, all the settings sound full, clear and detailed. Each has a distinct personality and they sound so wonderful plugged straight into an amp that there’s no pressing need for the compression that so many 12-string players swear by.

The phrase ‘electric 12-string’ inevitably evokes the chiming Rickenbackers sounds of George Harrison and Roger McGuinn, but play Fender’s version for a few moments and you’ll hear classic tones that are equally recognisable.

The Electric XII is much easier to play and far more versatile than the Rickenbacker 12s we’ve encountered and it doesn’t box you into a sonic corner that you’ll never jangle your way out of. The Fender design would certainly be our choice if we had to choose just one electric 12-string, and they don’t come much better than this example.