Much is made of the desirability of pre-CBS Fenders, but how does a 1952 Telecaster from the golden era stand up to a model from 1968? Time to find out if the answer is as cut and dried as you might think. 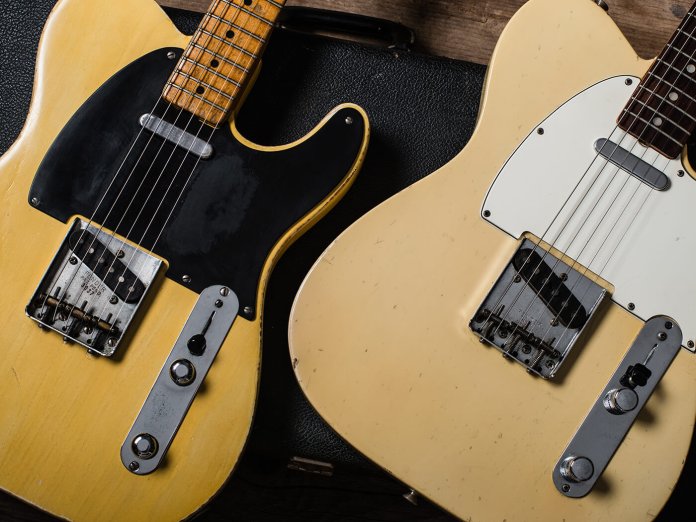 In the vintage guitar market, the terms ‘pre-CBS’ and ‘CBS-era’ have become pretty loaded. Leo Fender sold his companies to the giant Columbia Broadcasting System on 5 January 1965, and any product made by Fender prior to that date is unequivocally ‘pre-CBS’.

The distinction is crucial because the values of Fender guitars made a matter of weeks apart can vary dramatically. Much hinges on which side of the takeover date the guitar happened to be made, along with various other features, but it’s actually a grey area. For some time, Fender guitars remained essentially unchanged and Leo Fender carried on working for CBS in a consultancy role for a couple more years.

CBS instituted changes to manufacturing processes, largely for monetary rather than musical reasons, but these were rolled out gradually. The upshot is that the full gamut of features that typify the CBS era, and made it notorious, weren’t fully in place until late 1968. Some came later still.

The 1968 Olympic White Telecaster featured here is right on the cusp and showcases a combination of pre-CBS and CBS-era features. Most importantly, Fender still had stocks of lightweight ash, so the body feels like an old one. Peeking under the control plate, it’s clear that Fender was still using cloth insulated wire for pickups and control wiring, rather than PVC. Best of all, the necks were still being sprayed with nitrocellulose lacquer.

The same can’t be said of the body, but at least its tougher finish has managed to survive well and age gracefully. That said, the neck is in fine shape, too, but there’s still sufficient patina to make some observations about the wear patterns.

Almost all of the lacquer checking is confined to the front and back of the headstock. There’s a small area on the heel where it protrudes from the body, but none of the checking compromises the integrity of the finish and besides two small marks, the lacquer on the back of the neck is in perfect, unworn condition.

The Olympic White finish retains its original creamy hue and has managed to avoid turning mustard. Under the pickguard the colour is a shade lighter, but almost identical, and we can assume this is pretty much what the finish looked like when it was sprayed at the factory.

There are plenty of dents and a few small chips, but none of the crazing we would expect to see if the body finish was nitrocellulose. You can tell that Fender was spraying its new poly finishes quite thinly, and there’s even some playing induced rub-through on the lower bout. 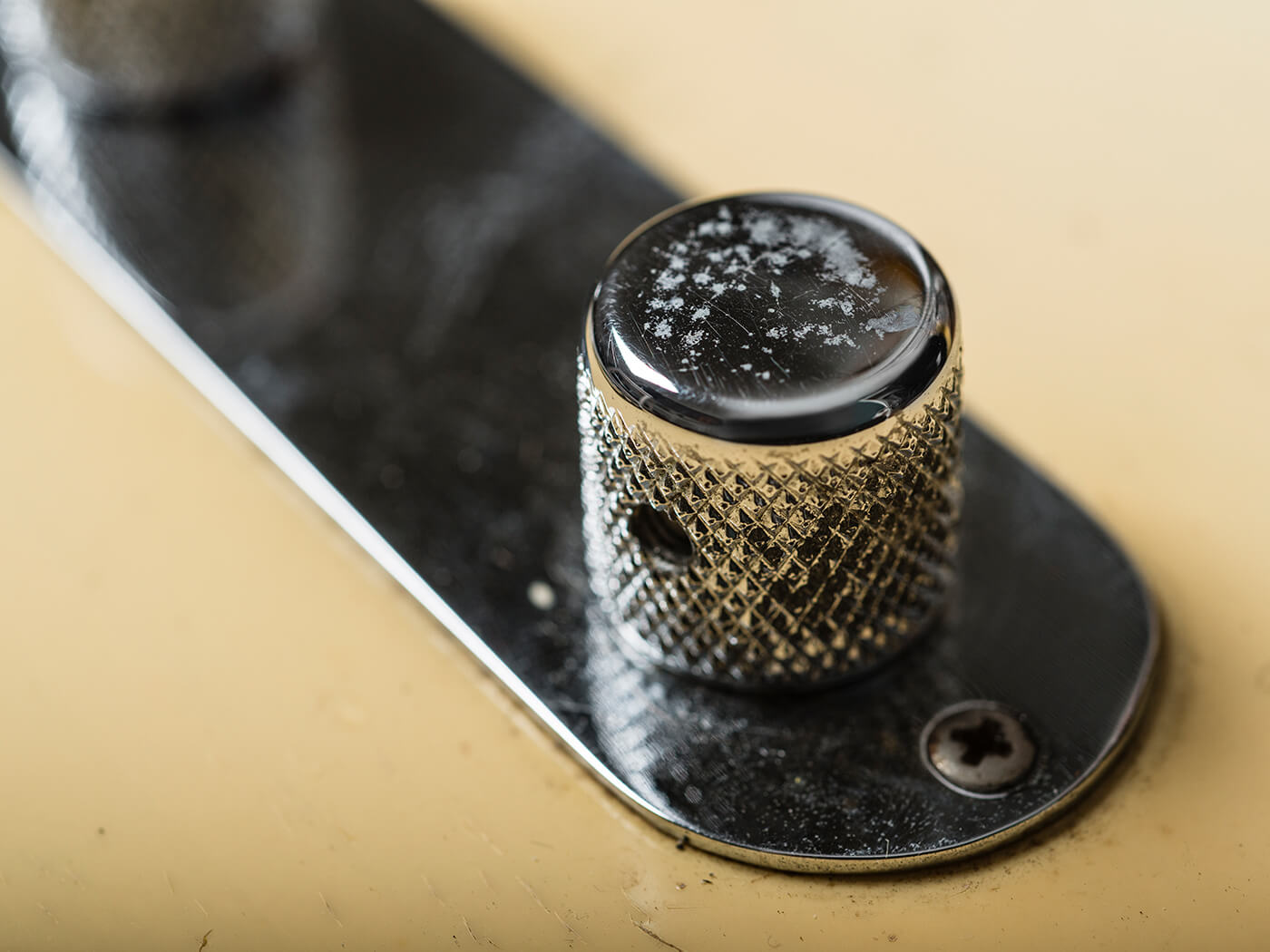 By 1968, Fender had settled on a headstock logo, with a bolder and blacker look than the earlier ‘spaghetti’ and ‘transition’ designs. Some have speculated that the CBS executives were keen for the headstock decals to show up better on television and this reinforced branding initiative was extended to the F-stamped neck plate, and bespoke tuners that replaced the double line Klusons.

In one of the few CBS-era moves that garnered widespread approval, Fender finally abandoned 1950s Telecaster wiring with its faux-bass preset. Players had been requesting this for years, and reconfiguring the wiring to a now-conventional neck/both/bridge arrangement was commonplace.

Fender made the change in late 1967 and introduced another new feature – a 0.001uF ceramic capacitor was wired across the volume potentiometer lugs so players could turn down without losing treble. You might call it the golden era of vintage Telecaster wiring, but it was short-lived. 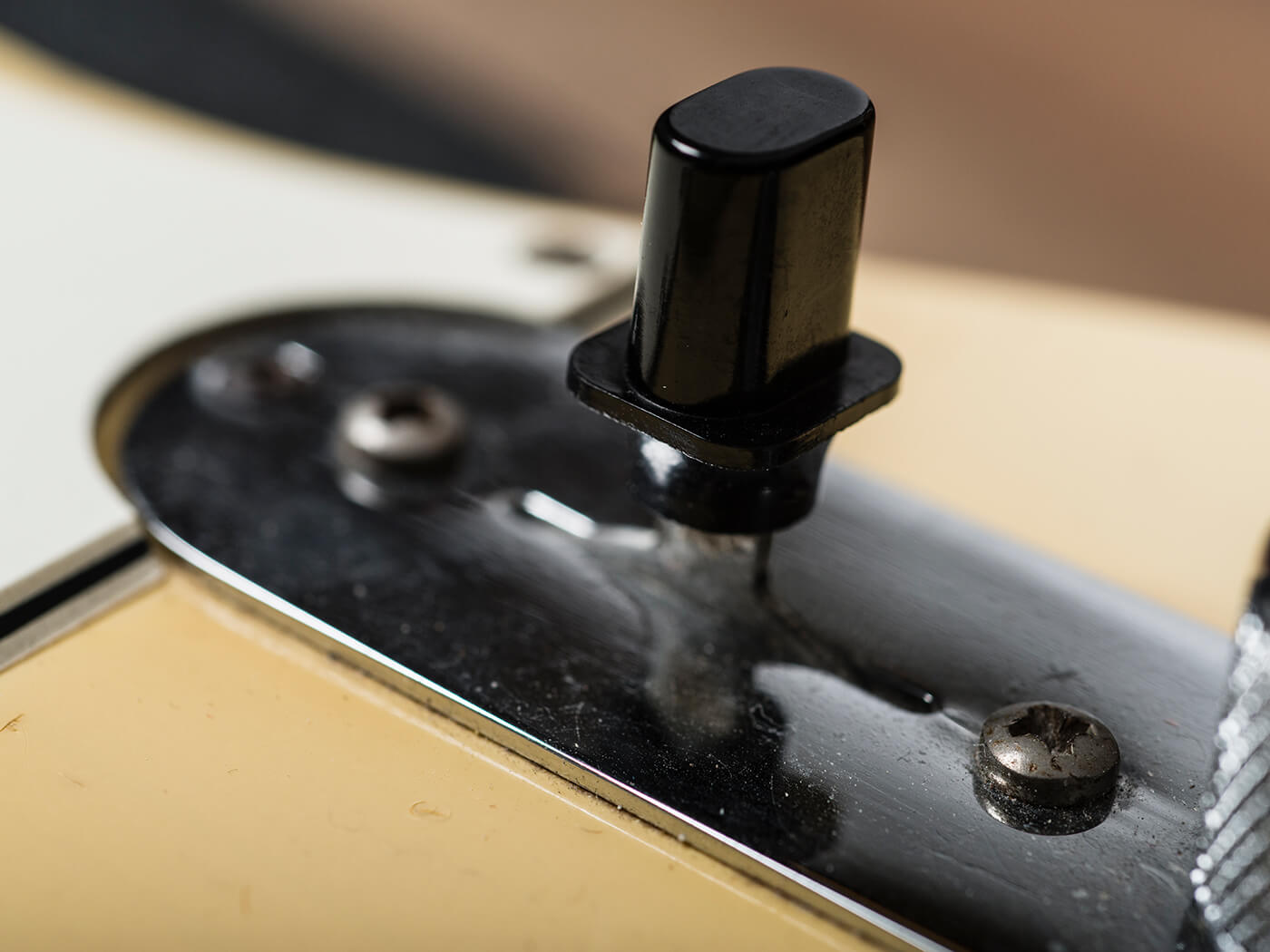 In 1969, Fender made the now-bewildering decision to put 1-meg potentiometers into Telecasters for added brightness. When combined with ever thinner and brighter sounding CBS-era pickups, as well as the treble bleed cap, the results could be rather brittle. Fortunately, this 1968 model was fitted with 250k CTS potentiometers, which date to the latter part of 1965.

Fender introduced rosewood veneer fingerboards in 1963, and this remained the favoured construction method for ‘rosewood necks’ until 1980. The change to pearloid dot markers may have been driven by the need for something tougher and classier than the previous clay dots. Although associated with the CBS era, Fender started introducing them in 1964, and yes, they did prove to be more durable.

This guitar’s fingerboard displays no discernible playwear and there are years left in the factory fitted frets. Although Fender would sometimes use pau ferro as well as rosewood during the late 1960s, the colour and swirly grain pattern of this fingerboard look like Indian rosewood. Having hopefully established this ’68 model’s credentials for taking on the ’52, it’s time to move on.

Saying a 1952 Blackguard Telecaster has some history might seem like a statement of the obvious, but this guitar has been in the movies – it was apparently used as a period-correct prop in 2015 Hank Williams biopic I Saw The Light. Getting into character always means dressing for the part and since this guitar had previously been stripped to natural wood, the production company specified that it should be restored to factory blonde.

The refinish was carried out by Don Opperman, who previously worked as a guitar tech for Stevie Ray Vaughan and Joe Walsh. It’s not the most accomplished relic finish we’ve seen, but to be fair to Mr Opperman, it was done in a tremendous hurry due to the film’s tight production schedule. 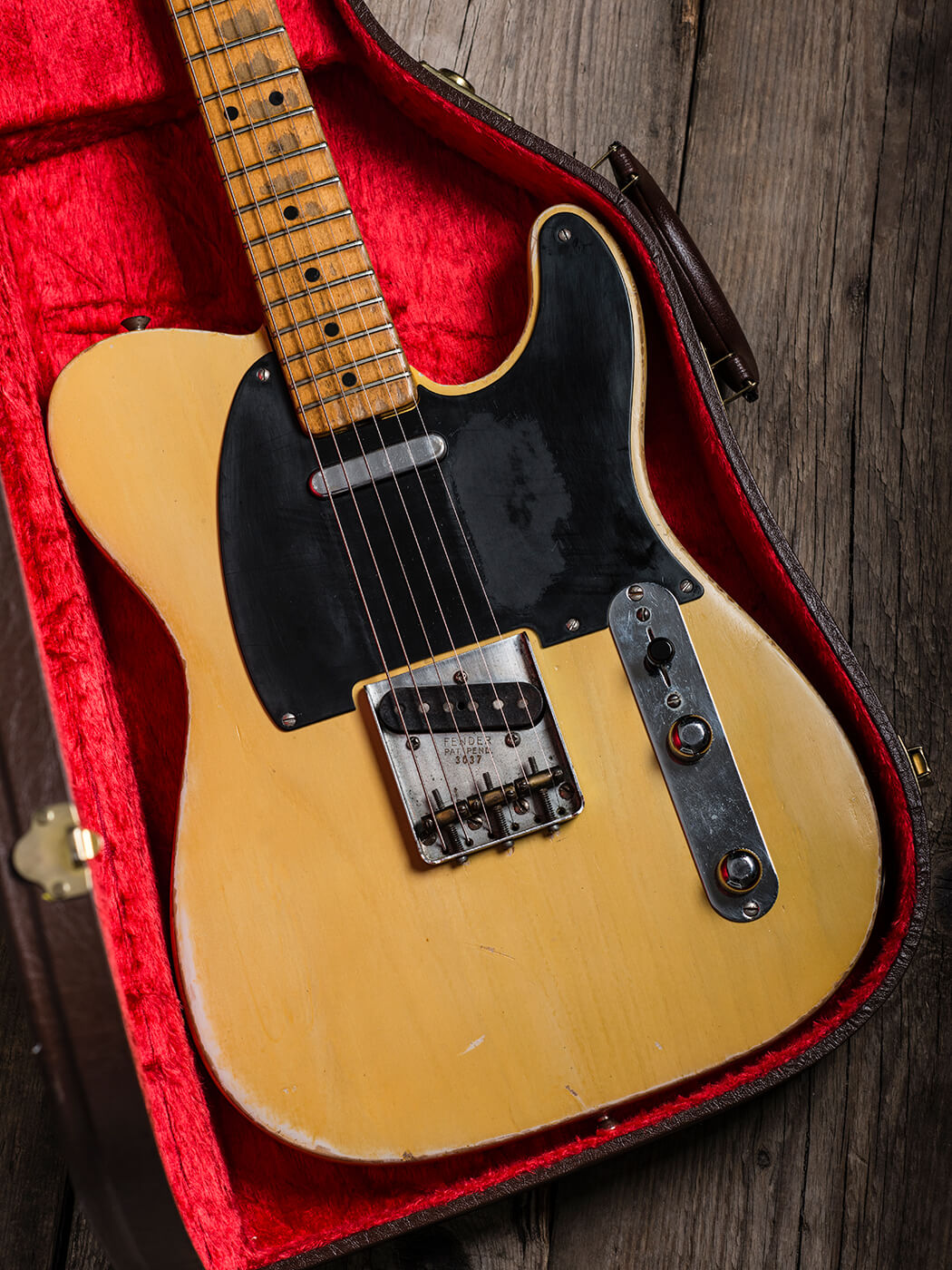 Clearly any future owner would have the option of getting a top-notch refinish done, and you’d still be saving a ton of money on the cost of an all-original instrument. Of course, much of the guitar’s value depends on the condition of the neck and the originality of the parts, and on that front it’s mostly good news.

The neck finish is totally original, and the decal is in such fine condition, it looks almost new. All the hardware is correct for a 1952 Telecaster, too, including the bridge, brass saddles and no-line Kluson tuners.

One tuner differs from the rest because it has a second post hole, but the fact that it is also a no-line unit indicates it was made between 1953 and 1956. Sources differ on the specific dates, so the suggestion that it could have been on the guitar from new isn’t beyond the realms of possibility. Its patina is absolutely identical to the other five, so it’s hardly a deal breaker. But if it’s a concern, you may find a vintage parts dealer who will offer a straight swap. 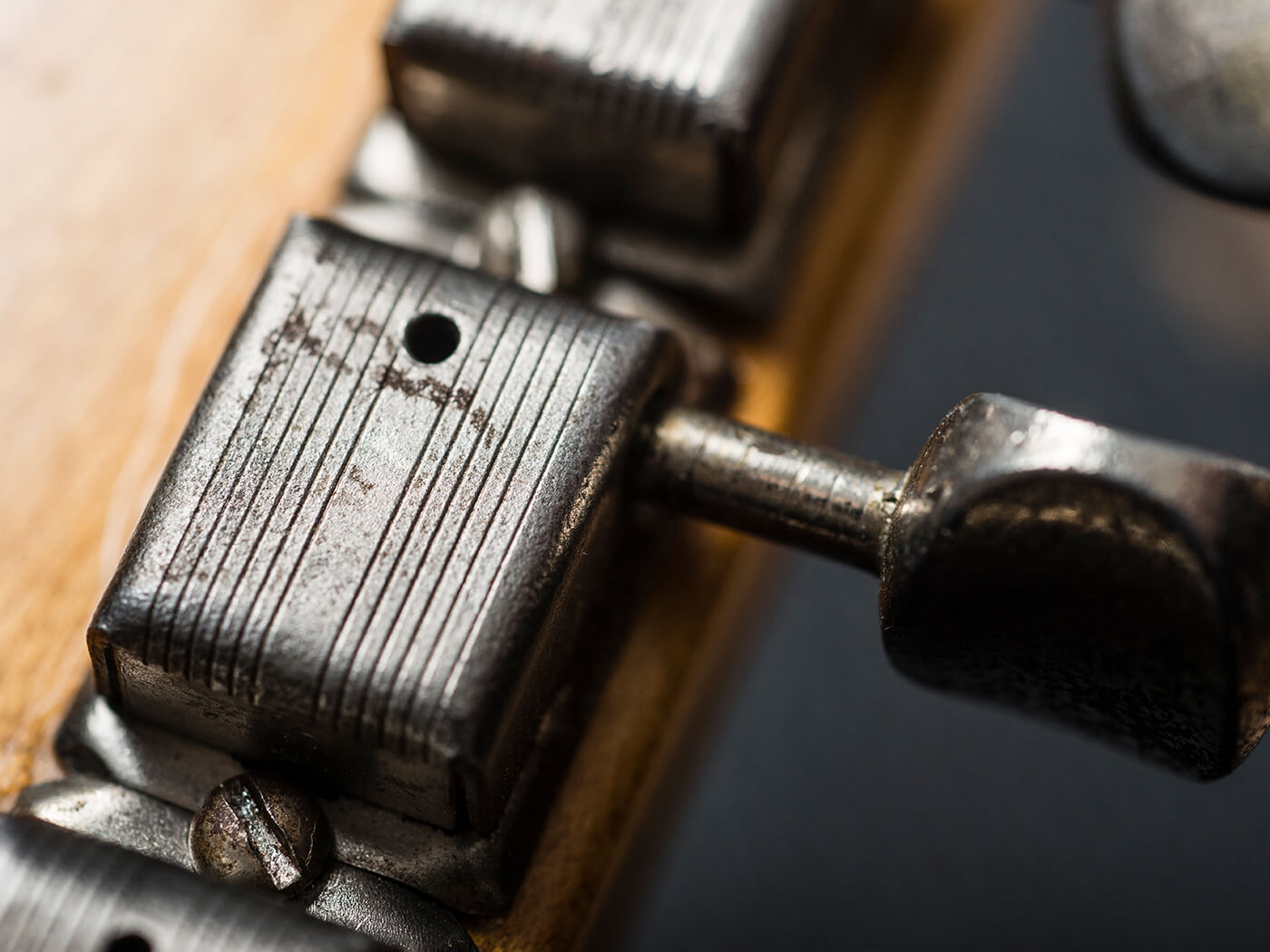 On the control side, things are all original, too – but as we discussed earlier, that’s something of a mixed blessing. The three-way switch gives you the neck pickup with a preset treble roll-off, the neck pickup alone and the bridge pickup. Both pickups are routed to the tone control, but the switch spring is so strong that we can’t get it to stay in the unofficial in-between position that we’ve been able to coax from original Blackguards in the past.

It’s also interesting to observe how the pickup wires were originally pushed through eyelets in the switch wafer before being soldered to the tags. It’s a very neat, old-school way of doing it, and possibly provides a bit of strain relief too.

Here we come to this guitar’s second significant issue. Although the neck pickup works perfectly, the bridge pickup’s coil had broken down was rewound by House Of Tone pickups. The correct 42-gauge plain enamel magnet wire was used, and the original wrapping string was reinstated.

You may also notice that the bridge pickup and strap button screws are cross-heads rather than flat-heads, but both are an easy fix. The black pickguard itself is a repro, but Ivison Guitars has done such a stellar job, we might not have noticed if we weren’t forewarned.

Both of these Telecasters have ash bodies and the weights are not too far apart, but the unplugged tones are distinct. They sustain impressively and have an airy chime, but the ’52 has more shimmer and the ’68 has extra midrange warmth and weight.

The main point of difference is on the wound strings, where the ’52 pops and twangs while the ’68 has a slightly more muted and woody quality. That could have something to do with the 1968 model having steel saddles rather than brass, or the replaced nut needing a bit of fettling. Or maybe it’s just an older set of strings, because we have never found late-60s Teles to be shy in the twang department.

Regarding playing feel, these guitars are closer than you might expect. The ’52 doesn’t have a particularly fat neck profile and it isn’t the work of Tadeo Gomez, who applied his sculpting skills (and signature) to the body rather than the neck of this guitar.

It has the softest of ‘C’ profiles along its entire length, and it doesn’t feel clubby in any way. In fact, this neck has an extremely comfortable and surprisingly modern feel, and even with the slightly worn frets it’s fast and effortless to play.

The ’68 neck has a slightly fuller ‘C’ profile, with a gently tapering depth that’s just as comfortable and effortless. We prefer the smooth satin feel of the ’52 neck, but if the pampered ’68 were subjected to a couple of years of serious gigging, it would probably end up feeling much the same.

Through a tweed Deluxe, the ’68 sounds astonishing. The bridge pickup is bright and fat, and there’s nothing shrill about it. The neck pickup has the softened highs we associate with the breed, yet it’s super clear and warm. It’s also perfectly balanced with the bridge pickup, and that’s fundamental for the great in-between setting.

The value of the treble bleed cap was poorly chosen because the tone becomes way too thin when you turn the volume down. But other than that, this ’68 has phenomenal tonal depth and range, and it snarls, bites and clangs with the best 1960s Teles.

This writer has an original 1954 Fender lap steel pickup in his own Tele, so we can attest to the fact that the ’52 model’s bridge pickup hasn’t suffered by being rewound. It has more chime, quack and cluck than the ’68, but we also find the string-to-string balance more even and it’s somehow refined as well as a bit wild. The neck pickup is a tad jazzier and darker than the Olympic White guitar’s unit, but it’s still an eminently usable tone.

We can’t rewire the controls, but we can clip a jumper cable across the switch to hear both pickups together and the result is breathtaking. The midrange scoops, the natural compression is accentuated and a phasiness comes in that’s perfect for country picking and rockabilly. We also find the ’52 sustains a little longer than the ’68.

Rewiring controls potentially devalues a guitar by casting doubt on the originality of the finish. But when a guitar is known to have been refinished, this isn’t an issue and we would change the controls of this ’52 to ‘modern’ spec in a heartbeat – the pseudo bass setting really isn’t useful at all. As for the refinish, well it almost halves the value without negatively impacting tone or playability. So, go figure.

The ’68 is equally fabulous in a snappier, edgier and punkier sort of way. As an instrument it’s as different to the 1952 model as a mid 60s Strat would be to a ’54, or a 1953 Goldtop would be to a Burst. Ultimately, it’s a matter of taste, but we know that the Blackguard will live longest in our memory.