Looking for a bang-for-the-buck vintage Gibson archtop? Try this 1963 ES-125TCD

Some of Gibson’s more affordable archtop models offer the best bang for your buck on the vintage market. We check out one such example, purchased new back in ’63 just 160 miles west of Kalamazoo. 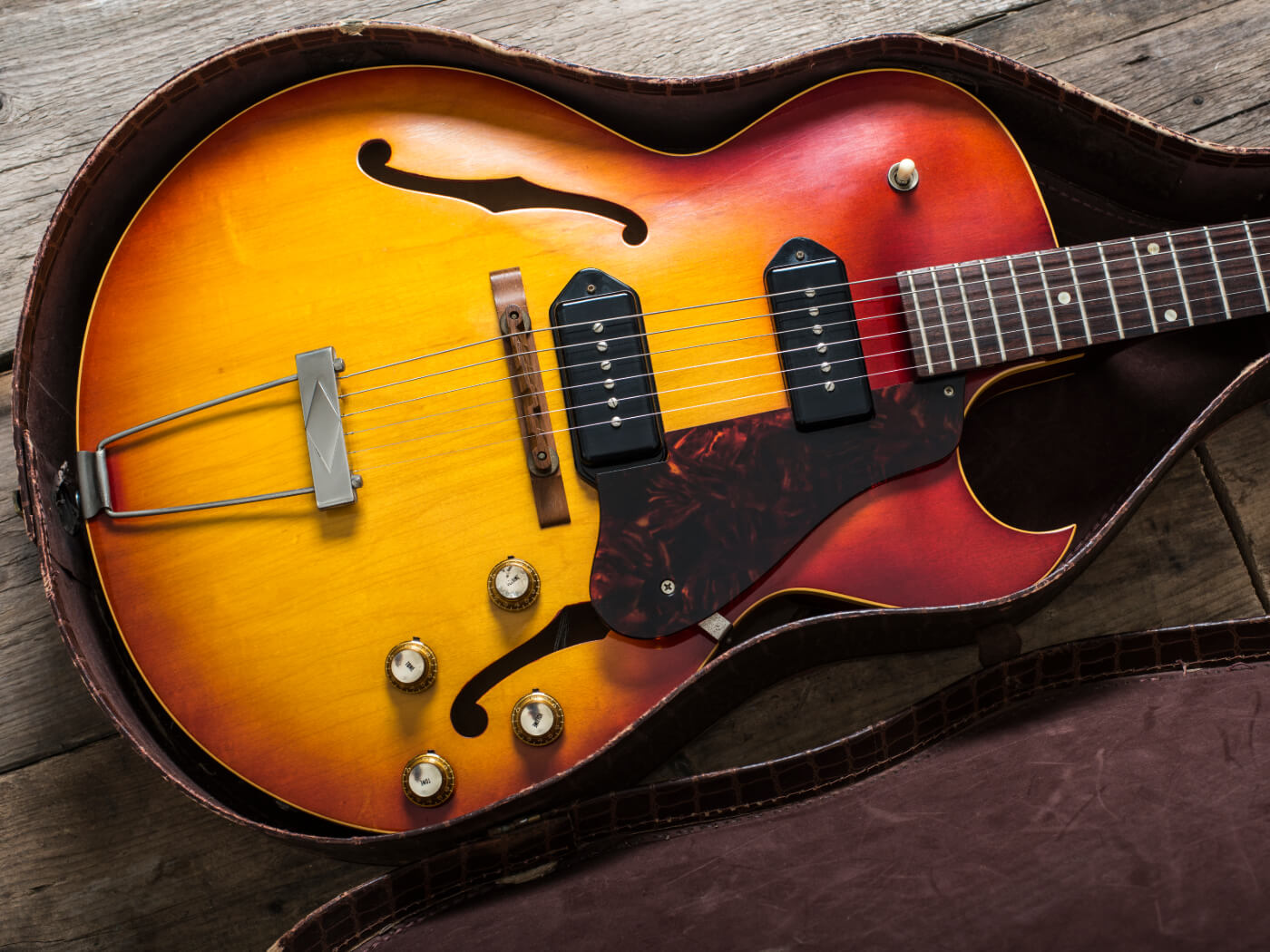 The little pieces of history that sometimes accompany old instruments are a wonderful part of the vintage experience. Although this guitar arrived at our door courtesy of ATB Guitars in Cheltenham, England, the original purchase order reveals that it was purchased new from Willis Music in Mount Clemens, Michigan, on 21 May 1963 by Audrey Euesden, whose initials survive on the ‘crocodile’ case.

Although the case itself has seen better days, the guitar inside is near mint. Its model designation is printed onto the inside of the back, just under the bass side f-hole, and the letters provide clues regarding the evolution of the ES-125 model. 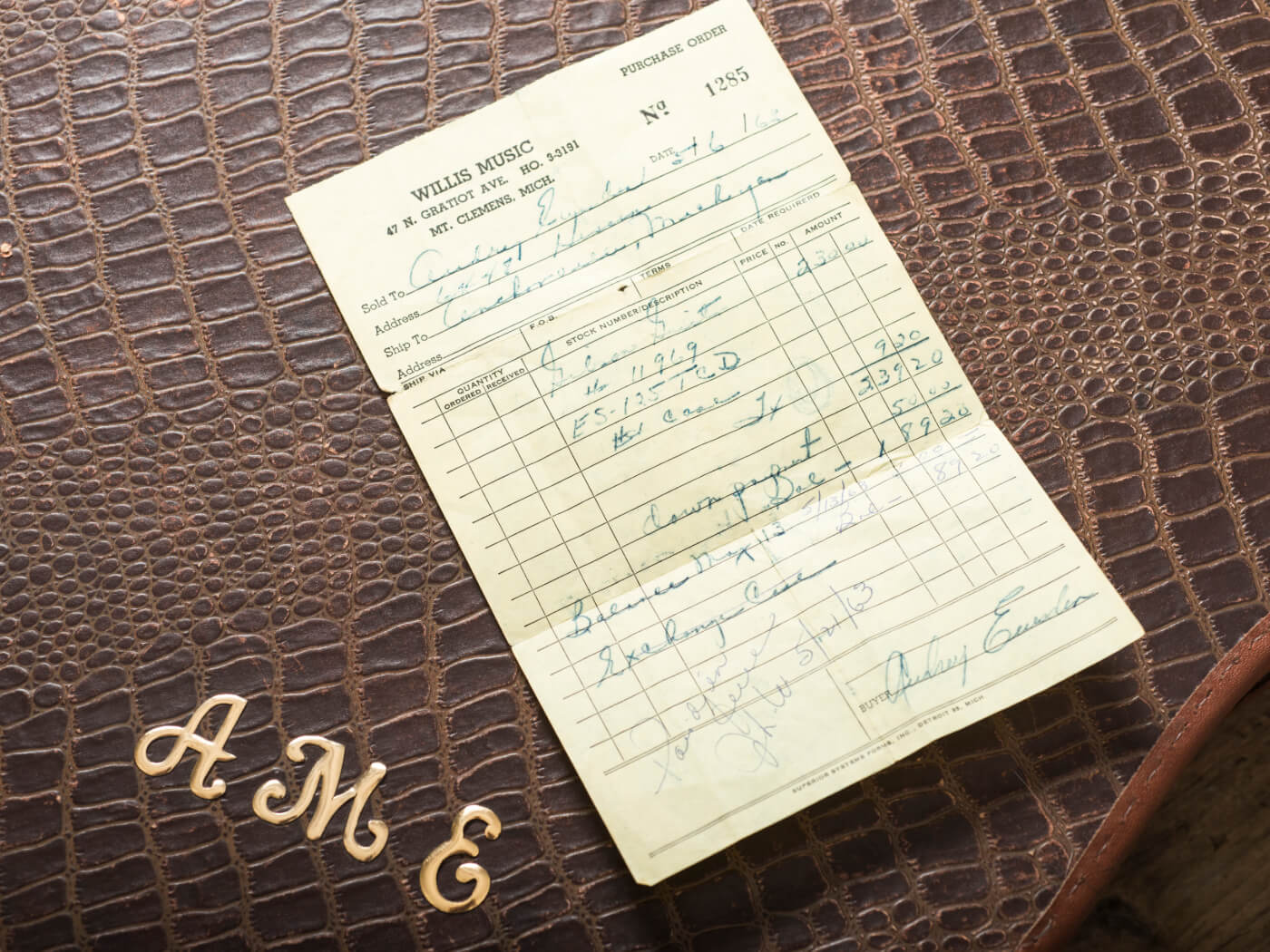 Superficially, the ES-125TCD most closely resembles an ES-225, but it’s perhaps more accurate to think of it as Gibson’s attempt at an entry-level jazzbox. It is to the ES-175 what the single-cutaway Les Paul Special is to a Standard – namely a version that’s simpler to manufacture with no refinements and ‘lower-quality’ pickups. Of course, golden-era P-90s are nothing of the sort, but it didn’t seem that way when the humbucker was cutting-edge technology.

You could argue that the ES-225 had two successors in Gibson’s hollowbody thinline range. In terms of build quality, there’s the ES-330, but the ES-125TCD retains the 225’s shape, neck design and more of the general vibe.

However, the ES-125TCD has a screen-printed headstock logo rather than an inlay, the fingerboard is unbound and there’s the single-ply black truss-rod cover used for ‘student’ models. The bevelled five-ply pickguard is gone too, and replaced with single-ply ‘tortoiseshell’. Both can warp to the point of interfering with playability, but this example is pretty flat.

By 1959, the ES-225 had acquired the same nickel-plated trapeze tailpiece seen here, along with a floating tune-o-matic bridge. In contrast, ES-125s always had carved rosewood bridges, but the most significant change was made inside.

The ES-225 had a substantial maple block glued under the top, right between the parallel braces. This feature, which gave the ES-225 some of the sustain characteristics and feedback resistance of a semi-solid, was dropped for the ES-330 and all the ES-125TC models. 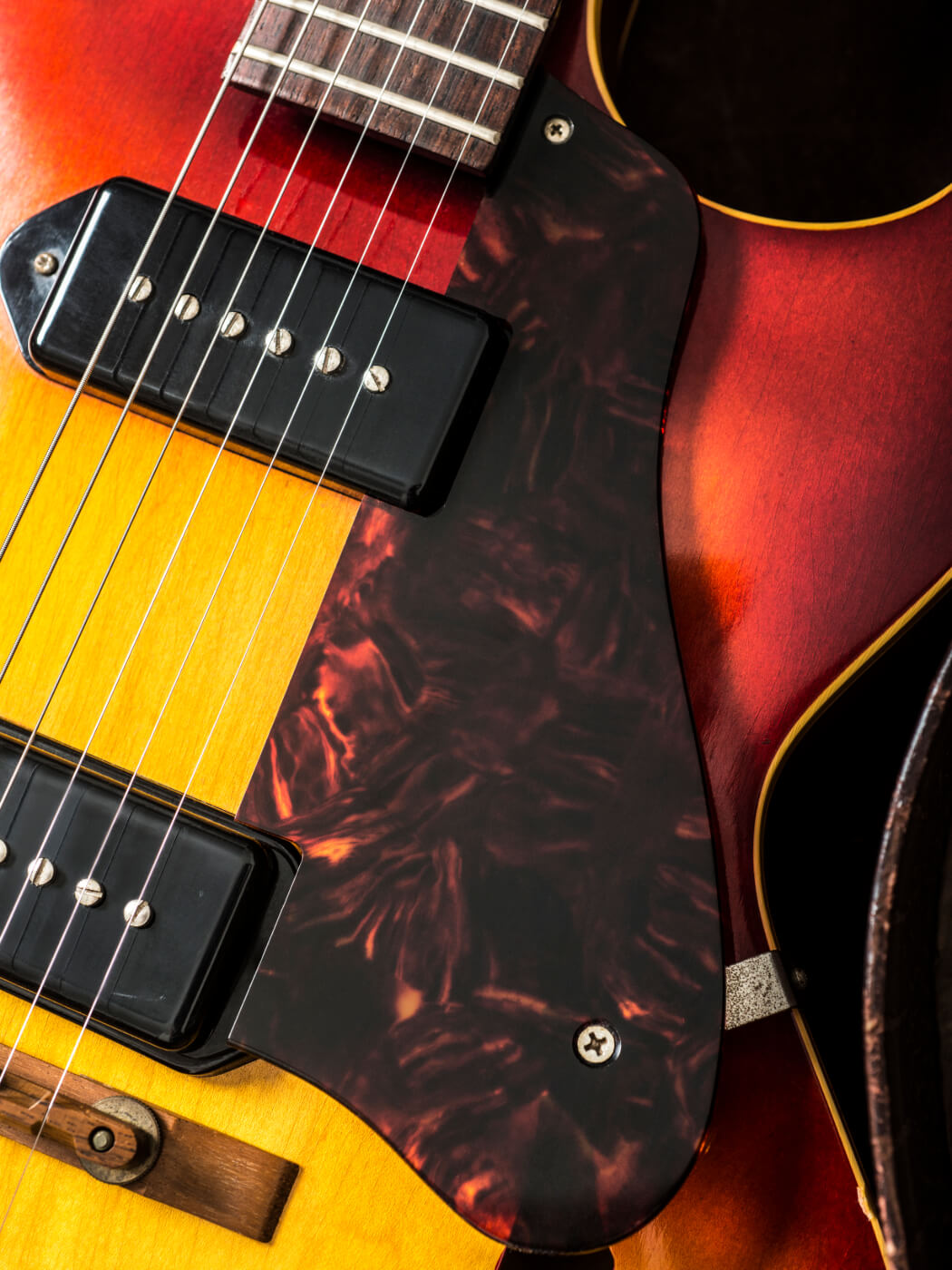 Peeking inside with an inspection mirror, we see four intact original potentiometers and a pair of Sprague ‘black beauty’ capacitors. Outside there are four ‘mirror’ knobs identical to those used on the last of the Bursts.

The cherry sunburst is much the same, too, and removing the pickguard confirms that the ‘tomato soup’ redness has barely faded. The cherry back and sides are no less vibrant, and while the top veneer is a single piece, there’s a centre join at the back.

Clearly these are all 1960s Gibson features, but the biggest giveaway is the neck profile and this example is fairly typical of the era. It bears no resemblance to the fatter 50s profiles and instead feels closer to the type of neck carve you might associate with Fenders of 1963. There’s not a great deal of depth and it feels more like a flattened D than a C. It has a standard width, it’s fast, comfortable and oddly contemporary. 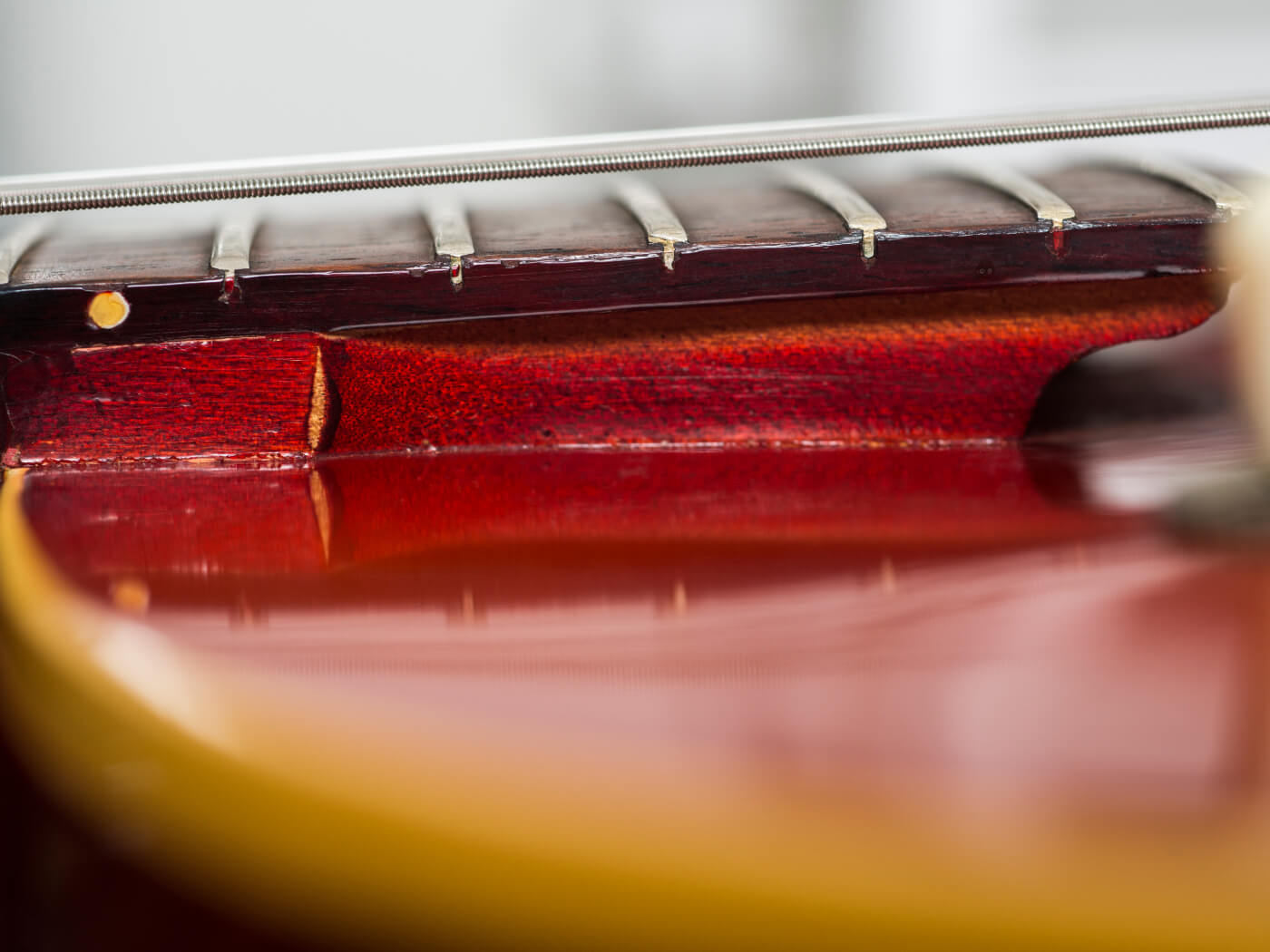 The overall condition is outstanding. There’s lacquer checking all over, but we’re talking fine lines rather than finish flakiness. Although there’s one dent on the front edge of the lower bout, between the pickguard bracket and controls, there’s almost no playwear on the back of the neck and the headstock has never needed to be repaired.

The fingerboard is in similarly fine fettle, and an absence of dirt shows the colour and complexity of the Brazilian rosewood in all its beauty. Since this guitar has not been used heavily, the wide and medium height frets have plenty more miles left in them and very few flat spots. The guitar plays perfectly as is, and the frets are a light dressing away from perfection. 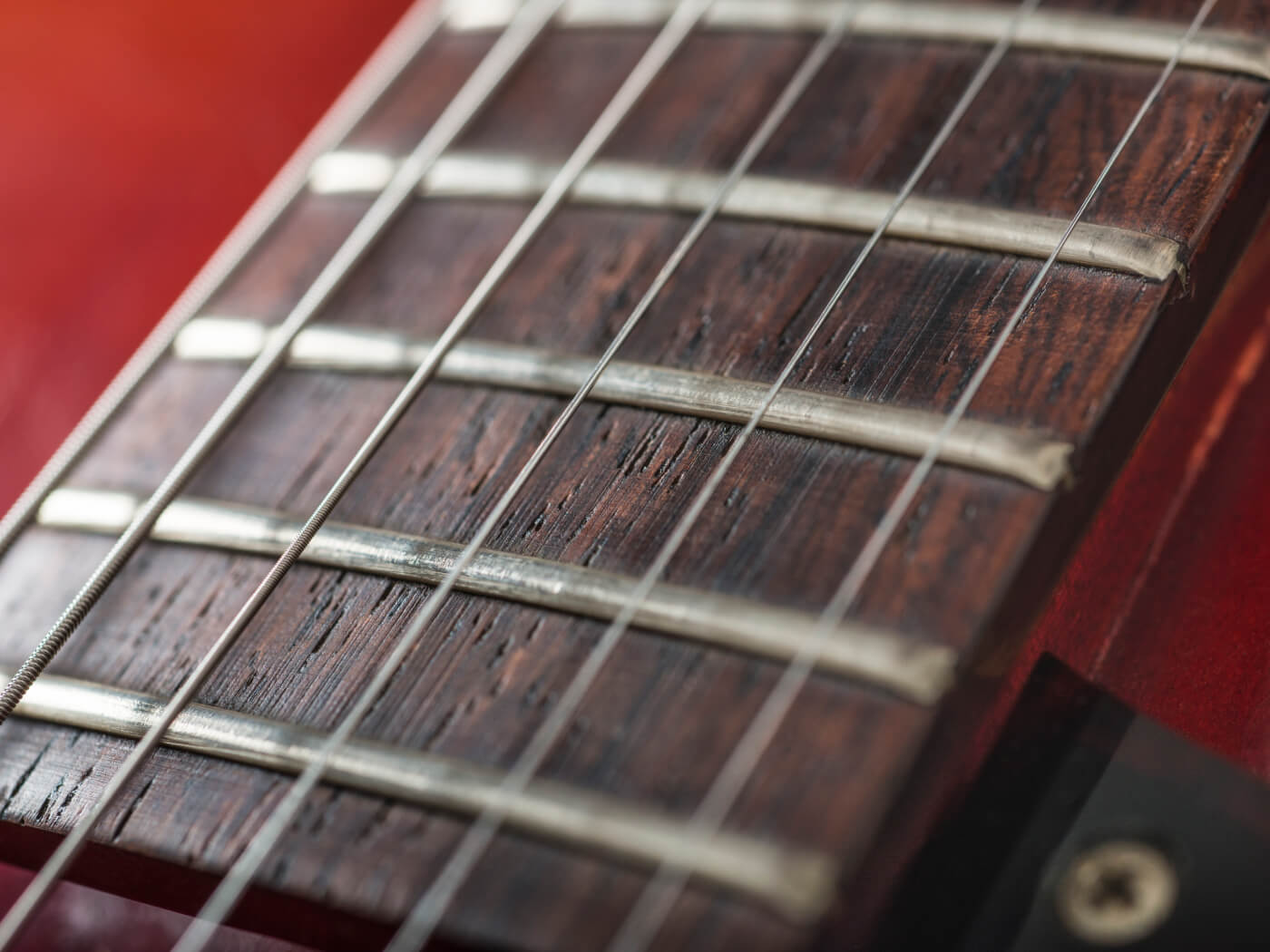 Played unplugged, the ES-125 has pretty impressive bass for a thinline, and it’s loud, clear and bright. Far more so than our own ES-225, but there isn’t anything like as much sustain. The ES-125 actually sounds closer to our ES-330, but it has a distinct twangy woodiness that can almost certainly be attributed to the bridge.

Whether you like the wooden bridge tone is a matter of personal taste, but the fact that it’s impossible to get the unwound G string to intonate perfectly is a stone-cold fact. This bridge was elegantly and precisely carved for string sets with a wound G, but no doubt somebody out there is making a drop-in replacement for those of us who use a plain G.

After raising the bridge pickup’s pole screws by a couple of turns, we get the two pickups to balance out. The controls are all working and noise free, and first impressions are that the ES-125TCD has a lot of character and a decent range of sounds. It’s also extremely clear and detailed, irrespective of pickup selection. 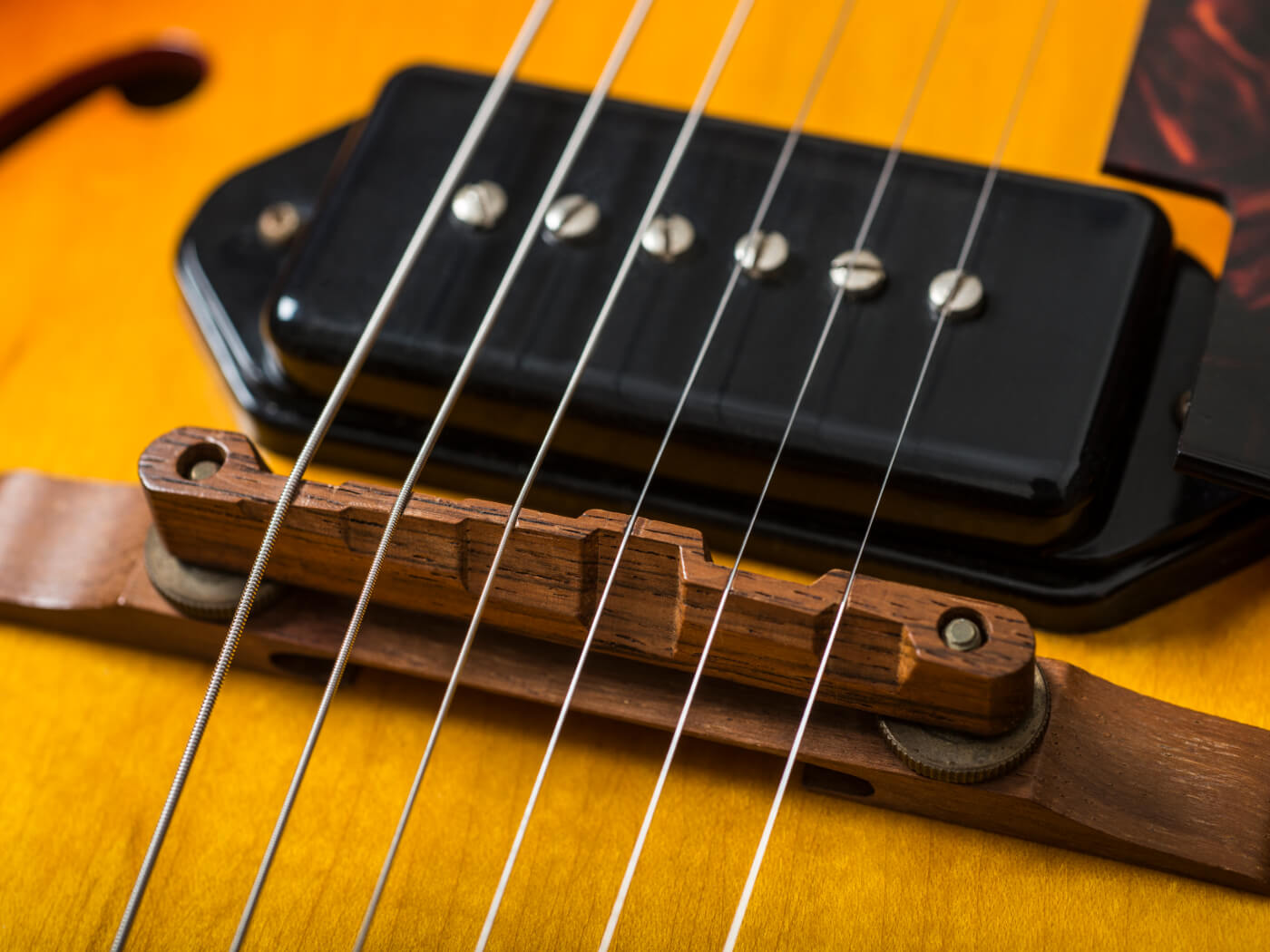 The woody twang we hear unplugged is best captured by the bridge pickup, which also adds some quackiness to the midrange. The neck pickup has a purer and more rounded quality that is vocal rather than quacky. It’s a fine tone for chord melodies and jazzy improvisations, while the bridge excels at jangly arpeggios and garagey rhythm tones.

It’s a fun guitar with overdrive too, although a feedback-prone handful at anything approaching gig volume. With this bridge the ES-125’s capabilities as a soloing guitar are somewhat limited, but there’s a simple solution.

An ABR-1 bridge will drop straight onto the bridge base and we decide to test it. There are noticeable improvements in sustain and definition, and the tone edges closer to that of our ES-330. An ABR-1 will solve the intonation issues, too, although the most famous ES-125TCD player of all – George Thorogood – seems to prefer wood bridges. Then again, he plays slide and uses heavy strings. 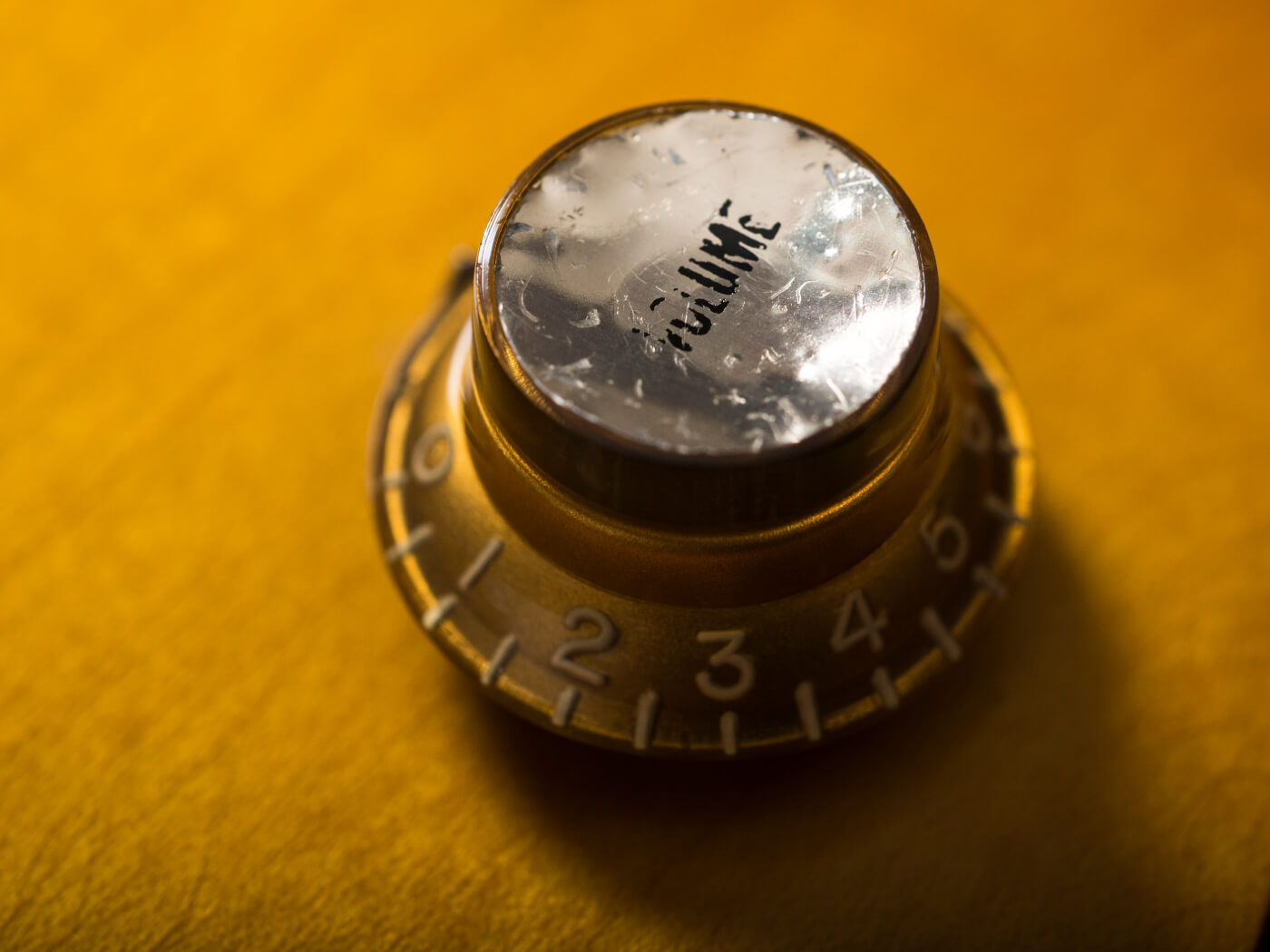 Considering that ES-225s and ES125TCDs are currently priced in the same ballpark on the vintage market, why would you choose one over the other? ES-225s have better sustain and feedback resistance, fatter necks and P-90s that are warmer and more nuanced. ES125TCDs have slimmer necks, a brighter and more percussive tone, and the 1960s P-90s are that bit pokier and more aggressive. As ever, it’s a matter of taste… 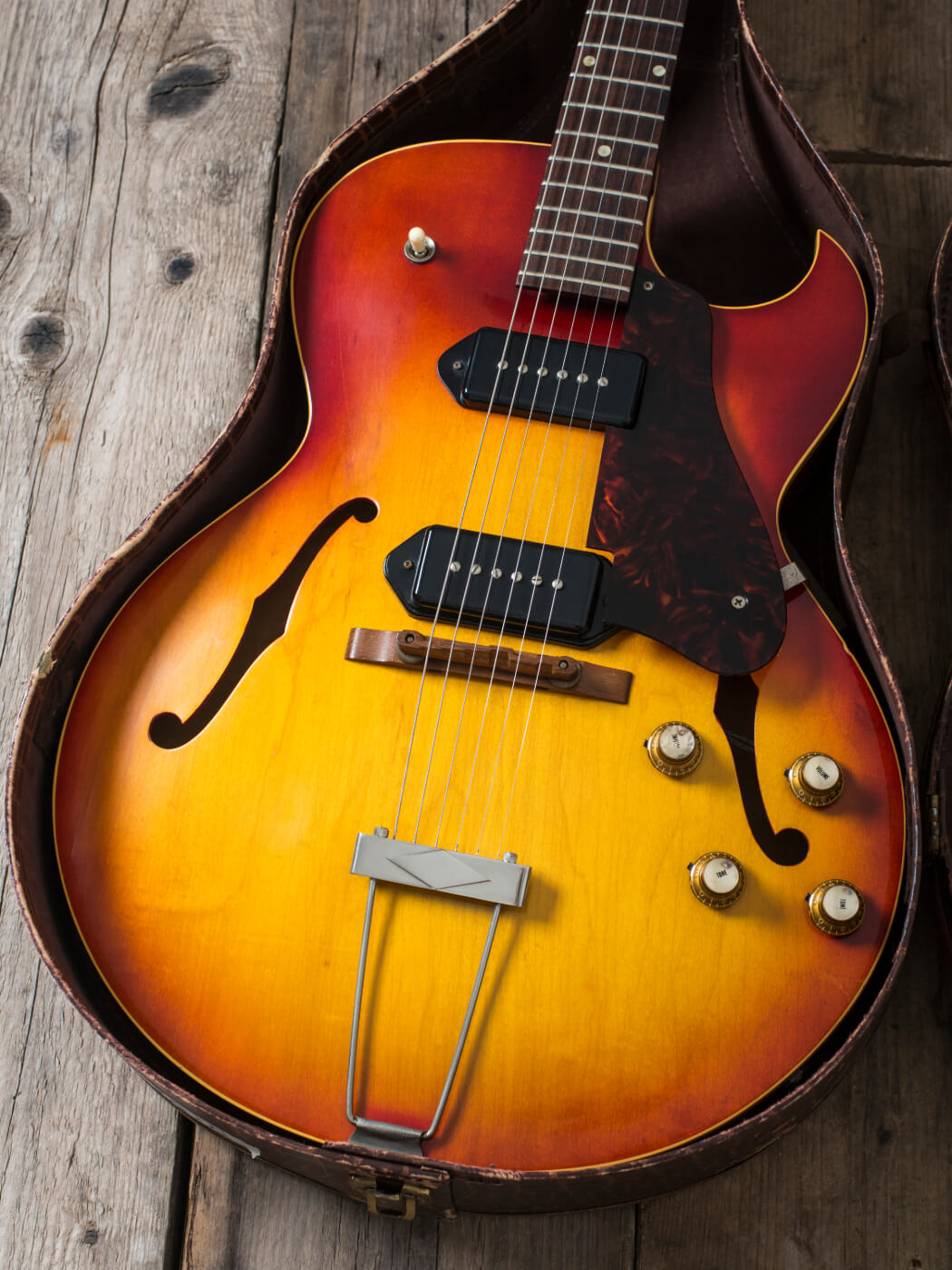