The Gibson Skylark is an underrated small amp from the late 50s and early 60s that many vintage collectors are focusing on as a viable alternative to pricier Fender equivalents. Read on to discover that great things really do come in small packages…

Almost all guitarists love vintage Fender tweed amps – and as a result, they’re not exactly cheap. Late-50s Bassmans and Twins reside in the ‘forget about it’ bracket for most ordinary players, but if a re-tweed isn’t a deal breaker for you, some well-used models will cost you about the same as a boutique amp from a top builder, or sometimes even less. Granted, a couple of grand is still a considerable outlay, so some vintage amp fans are turning their attention to other brands.

We’ve long considered Gibson amps to be both underappreciated and undervalued, because they can give you the looks and the tone to rival many of their more celebrated tweed equivalents, but for a lot less money. On this side of the pond, the obstacles are that relatively few made it to the UK in the first place, and that you’ll almost certainly need a step-down transformer. 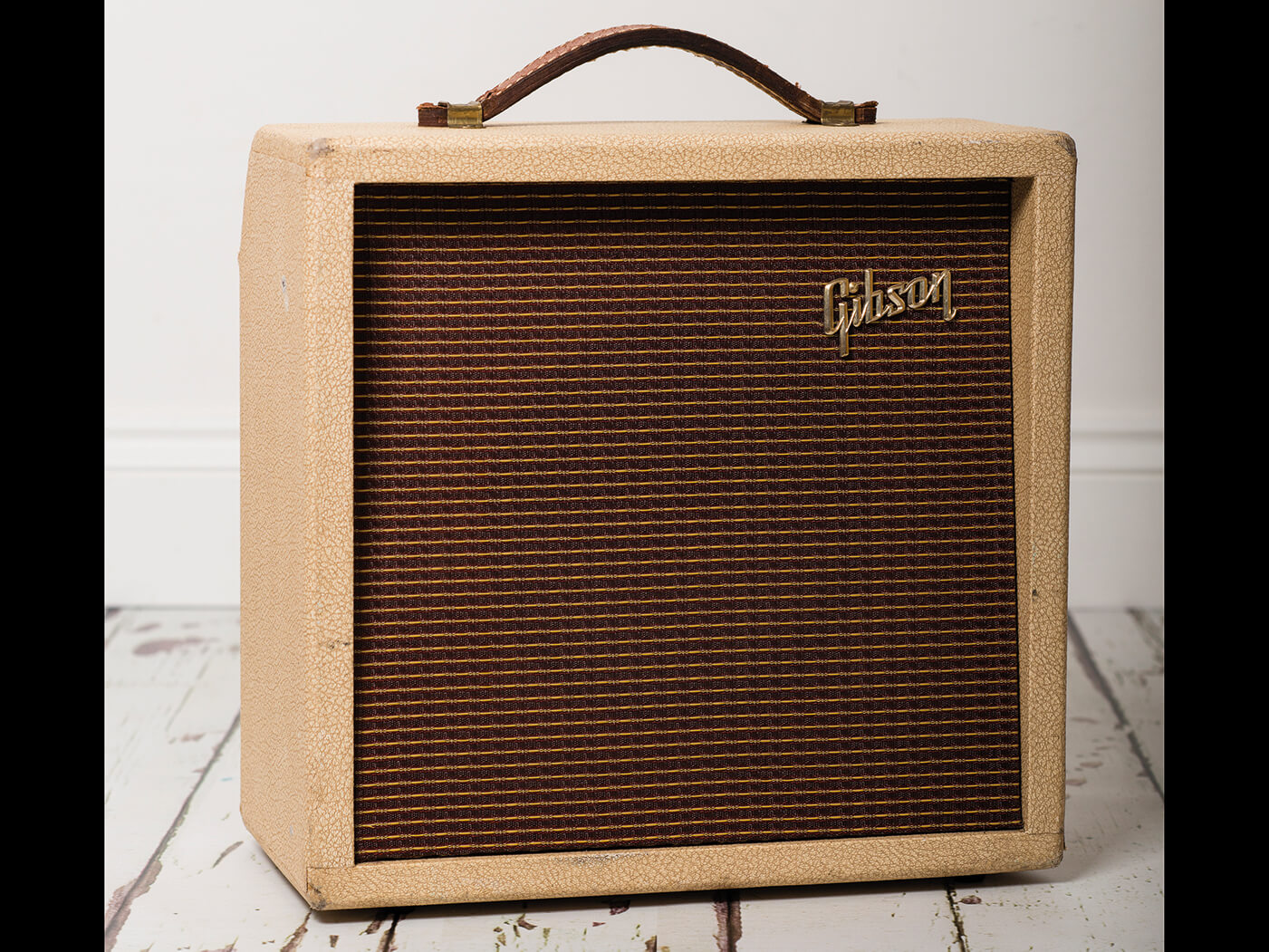 There’s a double whammy of further complications, too. The layouts often left the components vulnerable to heat damage, and the more complex models are also harder to repair and restore than the maintenance-minded designs of Leo Fender. The GA-5 Skylark model is a good bet, though. Since they have barely a handful of components, servicing these little guys isn’t a problem and they don’t generate much heat, either.

Because the serial numbers are less than reliable, pinpointing an exact manufacturing date for Gibson amps is never more than an educated guess. However, we do have a rough timeline, because pre-1958 GA-5s had a ‘TV’ front and a 6SJ7 pentode for V1. The pentode was superseded around 1957 with a ‘narrow panel’ cabinet redesign and in 1958, a 12AX7 started to be used in position one. Post-1963 models acquired a pair of 6AQ7 power valves, delivering 10 watts of output.

This is an example of the second version of the GA-5 and the date code on the Centralab volume pot indicates the fifth week of 1960. Although we can’t say for sure, this amp was certainly made before 1963 but most likely some time during 1960.

Could’ve been a contender

In the vintage market, GA-5s are often cited as an affordable alternative to the tweed Fender Champ. This is based on the physical size, 4-watt power, 8-inch speaker and an identical valve complement, but it’s not necessarily a valid comparison. The earlier 5C1 Champ and the first version of the GA-5 were certainly all-but-identical electronically. However, if you compare the later 5F1 Champ with this version of the GA-5, the circuits are noticeably different. The 5Y3 rectifier is the same but the GA-5 has a slightly beefed-up power supply with higher-value filter capacitors. From this, we might expect less compressed dynamics and maybe firmer lows.

All the signal-cap values are identical at 0.022uF, and the GA-5 is loaded with a bumblebee and two Sprague black beauties. It’s a wonder they haven’t already been pillaged by rapacious Les Paul enthusiasts, because they’re exactly the same as the tone capacitors used in many vintage Gibson guitars.

Additionally, both the 12AX7’s plate resistors are 220K rather than 100K, and the first stage has a 20uF cathode bypass capacitor. This capacitor should provide a full frequency boost, so we’re expecting a fair bit of overdrive when we fire this one up.

Clearly, these weren’t really gigging amps, so rarely venturing beyond the bedroom or suburban garage has ensured that plenty of GA-5s, Champs and so forth have survived in good condition. This one is in great shape and still has its original tan leather handle with brass fixings. The power light is missing a jewel, but a modern replacement would be cheap, easy to source and would appear identical.

Unlike a 5F1 Champ, the GA-5 features true point-to-point wiring – and it was very nicely done. The original 3-in-1 filter capacitor has been replaced with modern electrolytics. The work has been performed to a professional standard, but the original capacitor is included with the amplifier. Incidentally, we tested it and all three stages are indeed toast. Maybe a future owner could find a tech crazy enough to restuff the cardboard tube and restore the original look – although this wouldn’t make the amp sound any different. While they’re at it, they could replace the original mains wiring with modern wire in order to ground the amp properly. This amp’s originality is charming, but safety is more important.

The GA-5 is a far crunchier, sweeter and wilder ride than any Blackface or Silverface Champ and it has a bigger voice than a comparable tweed. The overdrive comes on very quickly, but it’s creamy, harmonically loaded and surprisingly devoid of small-amp boxiness and single-ended harshness. The bass stays remarkably composed, even when the amp is being pushed and far from being overly compressed, the dynamic response is lively and touch-sensitive. Like all the Gibson amps we’ve tried, the treble hovers on the edge of darkness, but the GA-5 does become brighter as the volume control is turned up.

One effective way to use this amp is to turn it up until you’re getting sufficient brightness, and then turn down the volume control on your guitar. If you have good P-90s or PAF replicas wired 50s style, or a treble-bleed capacitor on your volume control, then the brightness is maintained, the GA-5 cleans up really well and you can explore a wide range of clean and overdriven tones.

This GA-5 is comfortably one of the most enjoyable and best-sounding small amps we have ever tried, and it’s easy to see why its ‘big amp in miniature’ tonality makes the model so highly regarded for studio work. You can certainly get a righteously honking grind at levels that wouldn’t trouble even the most delicate ribbon microphone. And then, once you’re over the initial excitement, try turning down to experience that dark Gibson sparkle on the edge of breakup at acoustic-guitar volume levels.