This iconic 1930s resonator bears a few battle scars and has been spared a refinish. It’s a prime specimen. 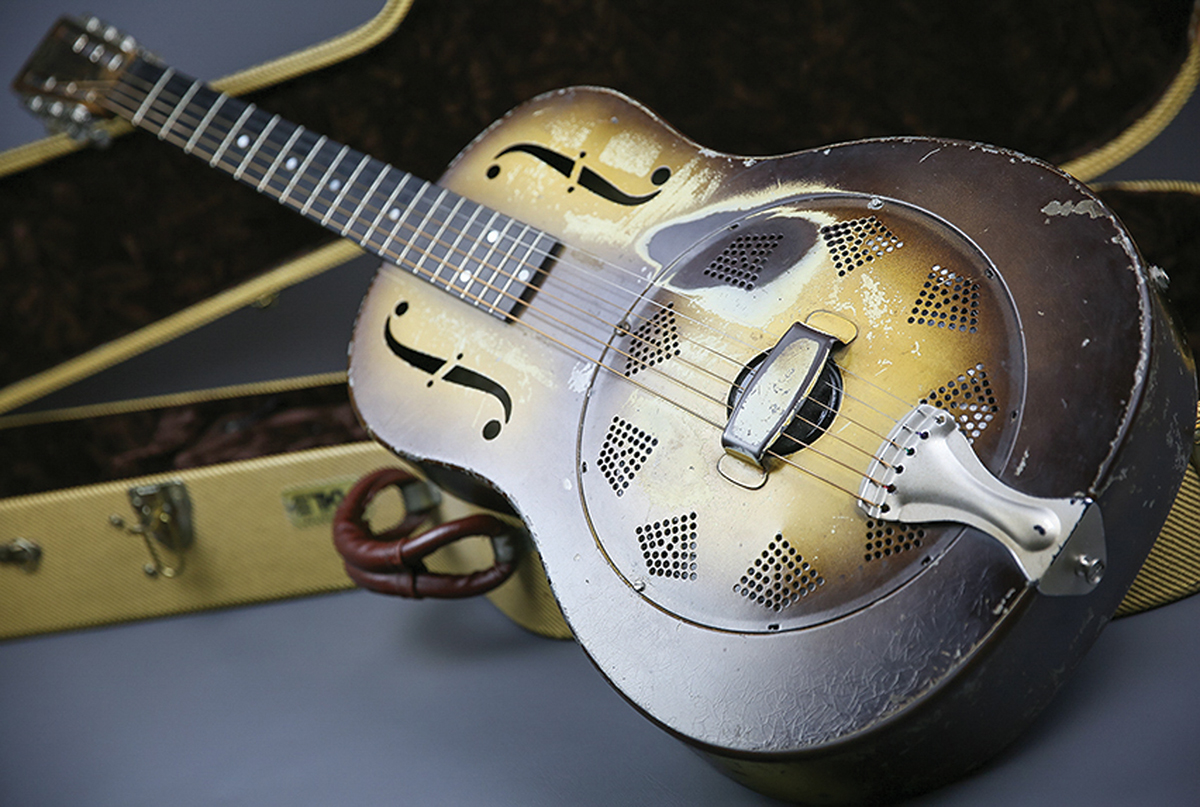 When it comes to steel-bodied resonator guitars, the original National Triolian is an icon. This particular 1932 example at Greenwoods Music in Liverpool matches the year and look of the Triolian used famously by Rory Gallagher, and exemplifies everything we love about the model.

Produced from 1928 to 1941, the Triolian was built with a wood body for its first two years of production before the switch to steel in 1929. That switch made all the difference; what resulted was a unique, brighter sound and a durable body less vulnerable to climate change, one that produced a gorgeous patina with playing wear. The particular geography of distress across this specimen’s body and neck is one of the best we’ve seen. We are endlessly grateful that the stories written on its body have not been erased with an ill-advised restoration. 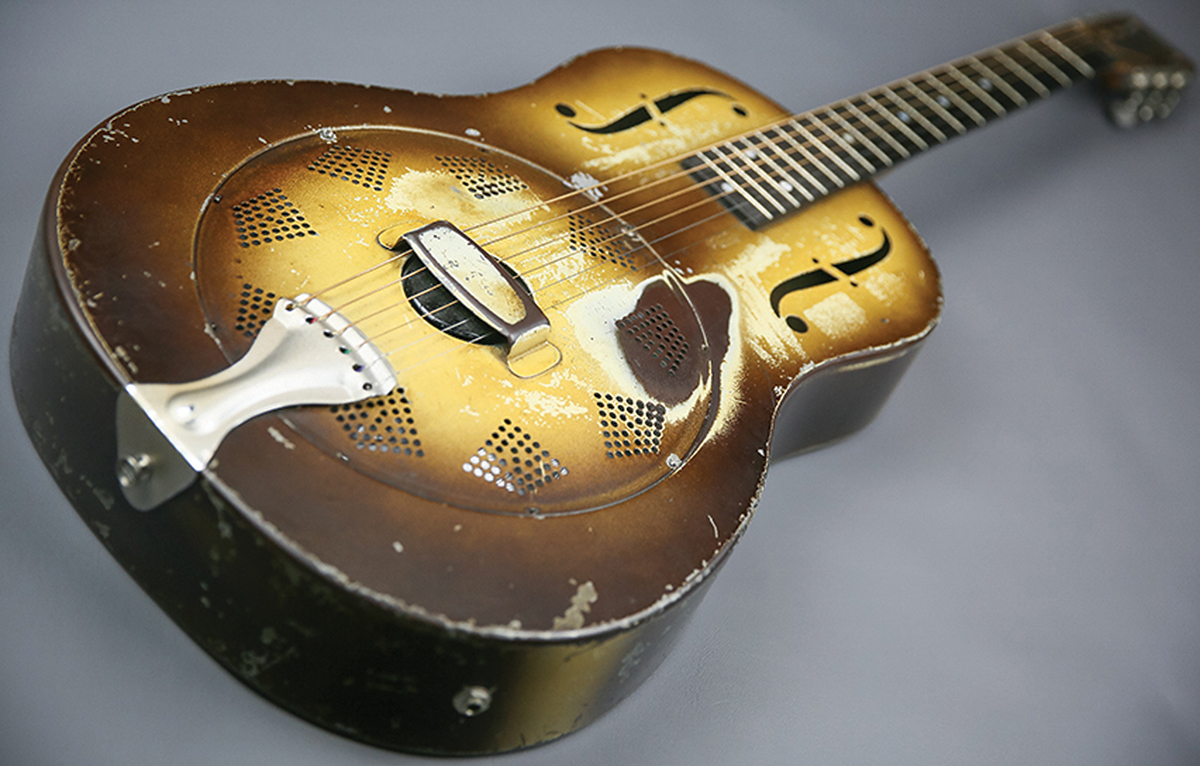 The notoriously thin and vulnerable polychrome finishes used on Depression-era Triolians, combined with a galvanised steel surface, led to paint flaking and blistering – a flaw that led to many refinish jobs and precious few completely original specimens.

Billed as a step up from its sister model the Duolian, the Triolian still had only a single resonator cone, despite its name. The main differences are in the wood choice for the neck – mahogany for the Duolian, maple for the Triolian – and some small aesthetic changes.

The Triolian had a 12-fret neck until 1935 and a slotted headstock until 1936. Square-back necks for lap playing were offered from 1933 until production ended in 1941. Today, steel-bodied Triolians from the early 30s can fetch well over £3,000 on the open market. 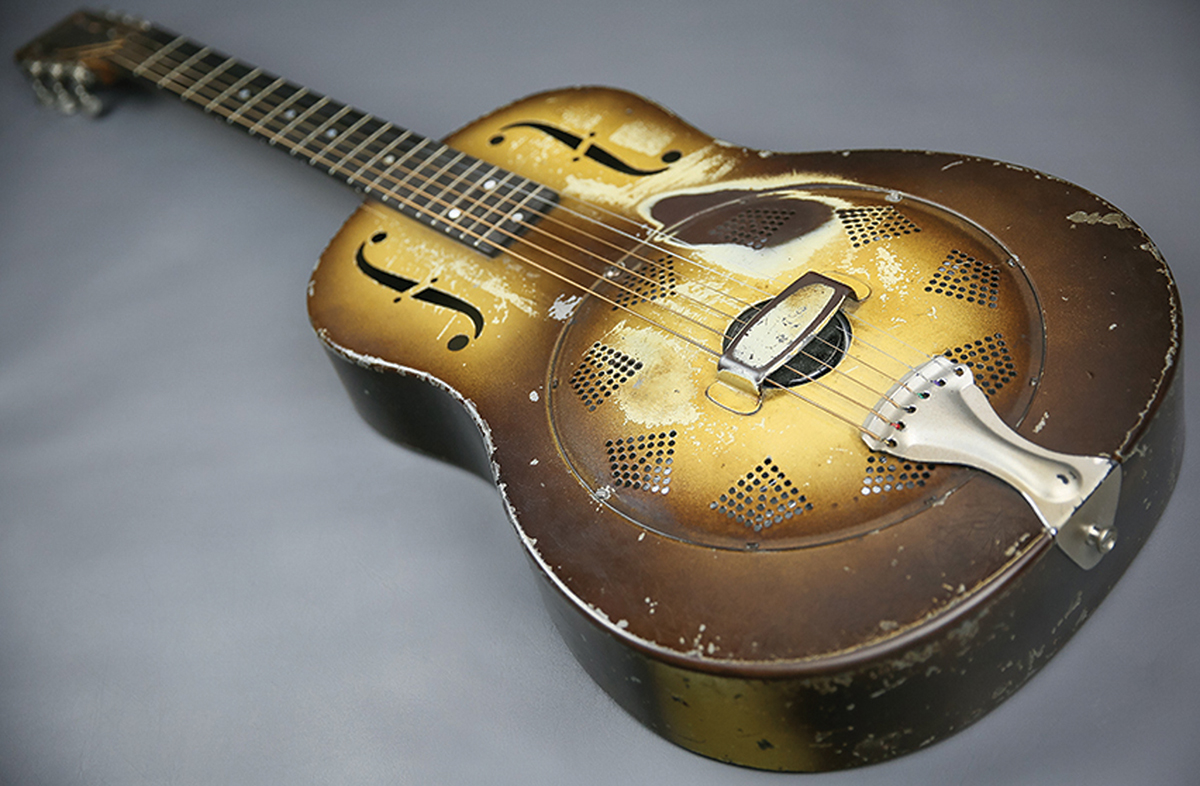 This model is an artifact from a unique period in the history of the National String Instrument Corporation. Founded in Los Angeles by John Dopyera, George Beauchamp, Ted Kleinmeyer and Paul Barth, the original company gave rise to the Dobro Manufacturing Company (formed by Dopyera with his brothers when he left) and ultimately Rickenbacker (formed by Beauchamp and Barth with others).

This specimen was produced just as Dobro and National reunited, though they continued separate production, branding and distribution for some time.