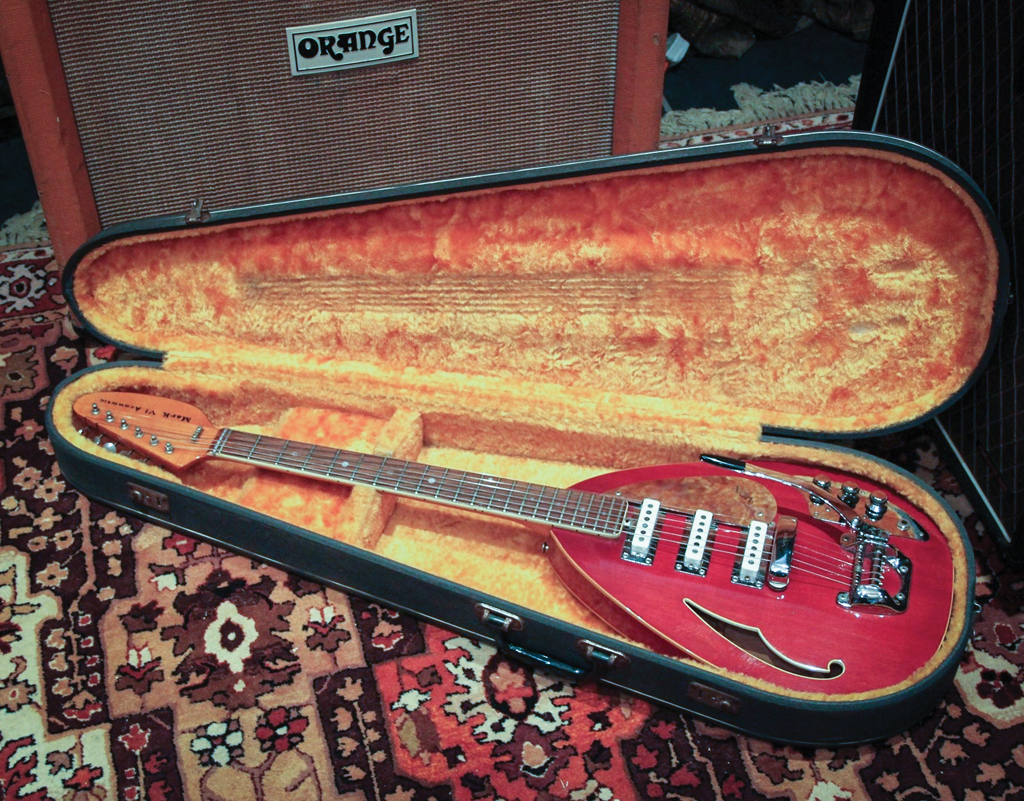 In the 1960s, JMI’s Vox brand shifted its focus from cheap, student-level guitars to the realm of pricier professional models packed with luxurious appointments. Whereas the company’s less expensive models featured ‘copycat’ body styles that did little more than pay tribute to the American Fenders of the era (see the single-pickup Stroller and dual-pickup Clubman for examples of these Strat-a-likes, both produced in a modest furniture factory), the professional models made use of striking designs contracted through the London Design Centre in 1962 in an effort to separate Vox from the crowd.

The first foray into the high-end market was the Phantom VI, a solidbody electric assembled in Vox’s Dartford plant using parts from various sub-contractors in the UK and Italy. The Phantom VI’s ‘coffin’ shape melded with Strat-style configuration of three single-coil pickups, winning over British Invasion bands such as The Dave Clark Five and The Hollies, as well as American outfits such as Paul Revere & the Raiders. Four-string bass and 12-string guitar versions were also produced as part of the line, priced at around double what the student models fetched.

With the success of the Phantom VI, Vox put into production another new body shape with the 1963 release of the Mark VI. This ‘teardrop’ guitar used the same Eko-built neck with paddle headstock and rolling vibrola tailpiece as the Phantom, swapping the rotary pickup selector for a more ergonomic three-position toggle switch. Rolling Stones guitarist Brian Jones was an early adopter of the Mark VI model, later going on to earn his own signature model, which curiously did not see commercial release in the 60s.

Reverb.com’s shop The Music Locker, in Derby, carries a rare Vox Mark VI Acoustic model – a semi-hollow electric gem with archetypal Vox ‘teardrop’ body. All-original with a gorgeous Trans Red finish and mirrored pickguard and control plate, this Mark VI Acoustic was one of Vox’s most expensive instruments of the time and has a more mellow, full sound than its solidbody brethren. This particular guitar has aged beautifully over the years and is in true collector’s grade condition, complete with an ultra-funky, shag-lined original case to round out that 60s vibe.