Ultravox’s mighty Midge Ure played in Thin Lizzy for about seven and a half minutes, y’know, so this hard-rocking, whammy-equipped Vintage signature guitar is entirely right and proper. Review by Marcus Leadley 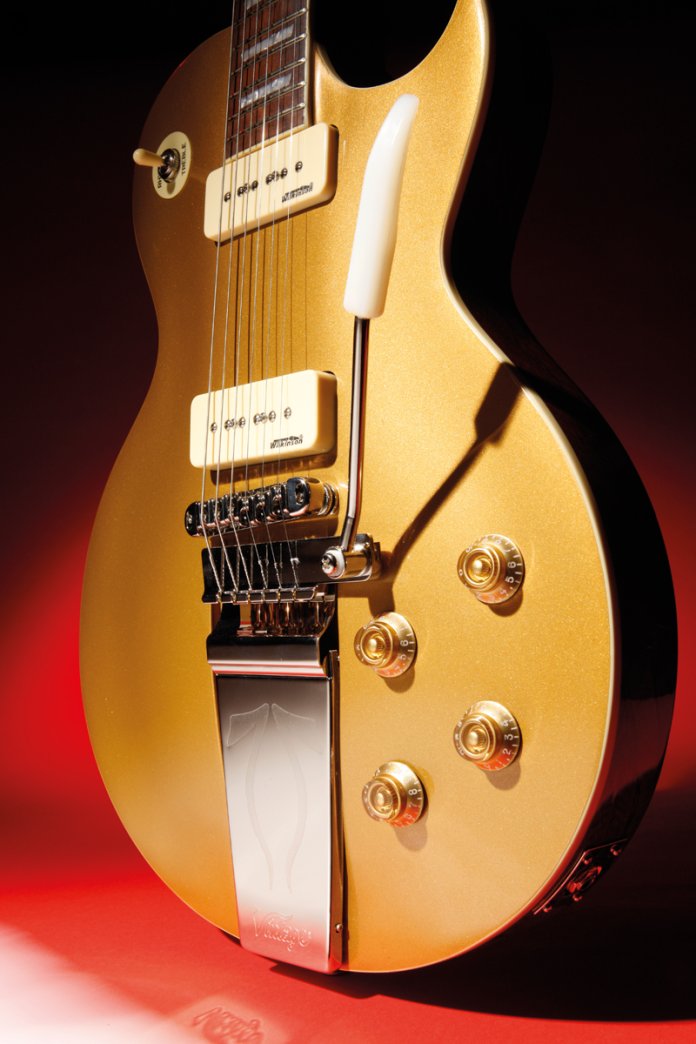 Midge (that’s Jim backwards, apparently) Ure has had a fascinating career. While many of us will associate him with the art-house pop of Visage and Ultravox plus the fact that he co-wrote and produced the second biggest-selling UK single of all time, his brief time with Thin Lizzy substantiates some proper rock guitar credentials. 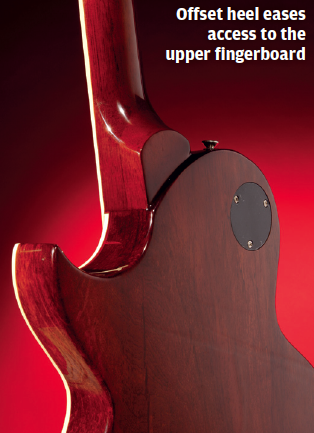 He’s still a very active songwriter, solo and band performer, and his love affair with Vintage guitars has been ongoing since 2010. Since then, the V100 and the Lemon Drop have been his two main stage guitars, and the sounds he pulls out of them make a compelling augment for taking Vintage guitars seriously.

This signature model is essentially a modified V100GT Gold Top but with an added Gibson-style vibrola. Though it features the same PW90SK pickups that are fitted the V100GT, here they are connected to a master tone control and a Vari-coil rotary control rather than a pair of independent tone controls.

The PW90SKs themselves are stacked soapbar-style pickups that offer the hum-cancelling properties of a humbucker but with a bit more single-coil type bite, and the Vari-coil allows you to ‘dial’ the second coil in or out, so you can manipulate the sound to a much greater degree. 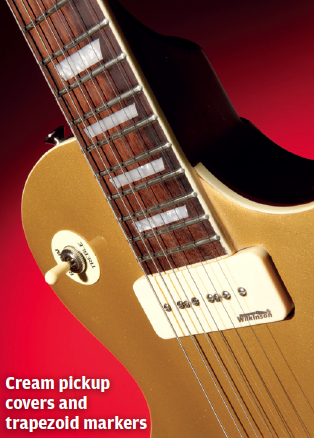 First impressions are very favourable. The Les Paul-inspired design is a classic and the Gold Top finish with cream pickup covers is a look that echoes the style of the early/mid 1950s. As well as a subtle redesign for the headstock there are a couple of significant shifts away from the old formula.

The upper shoulder curves in towards the neck rather in the manner of the old Aria PE guitars, while the neck joint has what designer Trevor Wilkinson refers to as an ‘offset heel’, intended to facilitate better upper octave access. It’s an elegant solution.

While the vibrola looks at home, this unit was really designed to fit flat-top solid guitars like the SG, and its use here requires a significant rout behind the bridge which extends pretty much to the tail of the guitar. You’d never know it, but the body is also very slightly oversized so that the distance between the vibrola and the bridge can be correct without creating an overhang at the tail end. Clever stuff. 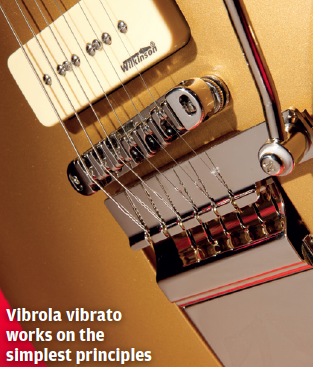 Wilkinson has paired the vibrola with a GBR Roller Bridge and the tuning is very stable. The body is built from mahogany with a carved maple cap subsequently glued on: classic LP stuff. While the exact structure of the body could only be revealed by destructive methods, removing the rear control covers reveals significant cavities in both upper and lower bouts, so there is a degree of chambering; the body certainly rings beautifully and the sustain is very good.

The neck is also made from mahogany and, as is the case with most Vintage instruments, the headstock is scarf-jointed on below the third fret. This means they use less wood (and save money) but it doesn’t affect the performance and arguably produces a stronger neck that’s very unlikely to warp. The bound rosewood fingerboard look and feels very nice and the fretting and finishing are in line with the generally high standard that the Chinese factory delivers for instruments in the Vintage Reissued series. 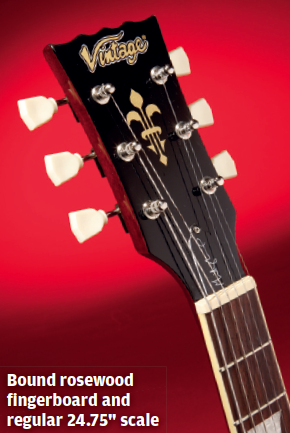 Sounds
The traditional P90 pickup still remains popular for its sweet, singing but raucous tone. These Wilkinson PW90SKs are the same Platinum Series pickups used for high-end Fret-King guitars; though clearly based on the familiar P90 theme, they develop the concept further via the stacked coils and also by containing both an alnico and a ceramic magnet to attain a certain balance between output and character.

The basic single-coil clean tone is well-articulated across all three settings. The bridge pickup delivers a bright but sweet tone that sounds great for melody playing and ’60s style shimmery pop. The twin pickup setting is tonally more complex, which makes a good starting point for experimentation, and the neck pickup has a rounded low-end response, which makes it especially good for accompanying vocals and for general rhythm work.
You can add a little of the second coil to any of these tones to warm the sound up and smoothen the bright side. Going all the way to humbucker mode works well both with the twin pickup option and the neck unit, especially if you want jazzier tones. The bridge pickup humbucker tone is a little too squeezed in the midrange for my taste, but this comes into its own when you ramp up the gain, as it really starts to wail.

The range of lead voices you can create is quite something; the combination of the Vari-coil and the tone control provides a multitude of shades and different dynamics. The Vari-coil can also be used live to nuance your sound on the fly, and this can be very expressive and creative. 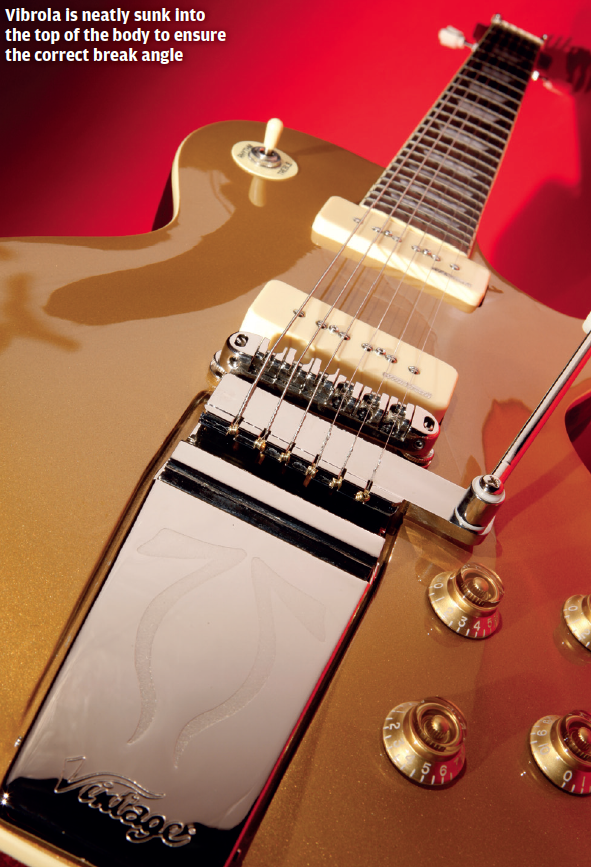 Verdict
Does the addition of the Vari-coil and the vibrola justify the upcharge of £110 above the basic price of a Vintage V100 Gold Top? Yes, we believe it does, not only for the classy looks but also because the Midge Ure model’s tweaks do offer some real sonic advantages. Thanks to its clever housing the vibrola works surprisingly well on this style of guitar, and the bridge design is such that you have too get quite aggressive before you need to retune.

The artist branding is limited to a simple signature on the truss rod cover, so whether you’re a Midge fan or not is pretty much irrelevant; the main thing is that while this is a relatively low-cost instrument, you can be confident that a pro musician, who could pretty well play anything, walks on stage with the very same guitar. It’s the quintessence of a genuine celebrity endorsement… and what could be better than a great sound at a fair price? 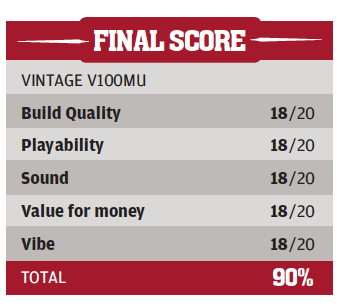