The AC10 is arguably the least appreciated of the classic Vox amps, but it’s back as the AC10 C1. 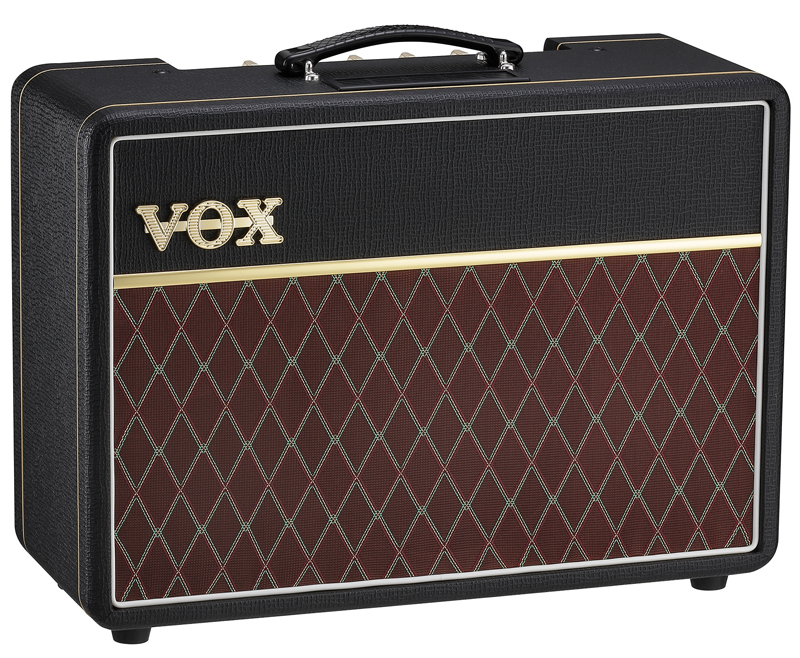 Starting in 1959, the AC10 was shipped in various forms. The early `TV front’ cabinets gave way to the more familiar Vox-style designs in 1961 and beige turned to black in 1963. The AC10 started out life with a single 10-inch ELAC or Goodmans speaker and from 1962 onwards an AC10 Twin with two 10-inch speakers was available as well.

Electronically, it was a bit of an oddball because Vox used some unusual valves. The EF86 pentode had been employed in all of the earliest Vox amps; it was notoriously microphonic and Vox had stopped using them in its more powerful amps.

Even so, it was deemed adequate for the AC10. Stranger still was the ECF82, which combined a triode and a pentode in one glass envelope. This valve handled both preamp and tremolo functions. In common with the Marshall 18W and the Watkins Dominator, the AC10 had an EZ81 rectifier, two cathode biased EL84 power valves, plus a `vibrato’ (tremolo) channel. The amp was constructed in Vox’s usual manner with components mounted on tag board, and equalisation was confined to a single tone control. 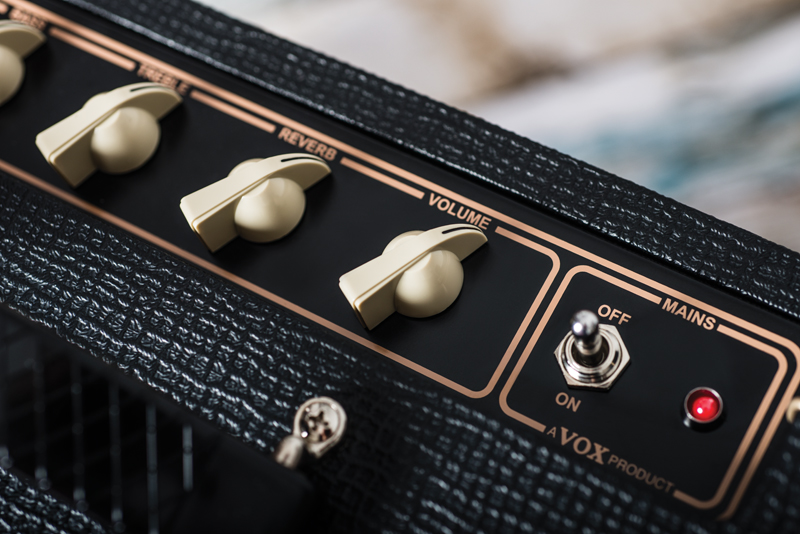 Besides establishing the pedigree of the AC10, I’m detailing all of this to demonstrate that the only important features the AC10 C1 shares with its forebears are the EL84s, the 10-watt power rating and the name.

Built in China, this amp is more of a re-imagining than a reissue. The C1 version has a single channel with bass and treble controls that are based on Vox’s top boost circuit. The tremolo is omitted but you get reverb instead. The originals were non-master volume amps, but the C1 has gain and master volume controls.

The components are assembled on printed circuit boards with the valve sockets and control potentiometers mounted on the boards rather than the chassis.

The C1 cabinet is smaller than both versions of the AC10 combo. It’s more or less a closed-back cabinet, with just a small vent at the base of the rear panel. Inside, there’s a single 10-inch Celestion VX10 speaker, along with a jack to run an external 16-Ohm speaker cabinet. Connecting to an external speaker disengages the internal one.

The AC10 C1 is also the first valve amp I’ve seen with an automatic power-off function. It’s installed to comply with European regulation and will power down the amp if two hours pass with no audio signal detected.

Cathode biased Vox amps are known to run hot, but fear not. Standing over the amp and playing a powerchord, I felt a blast of air from the top vent hit me full in the face. So there’s plenty of air moving around inside the cabinet to keep things cool. 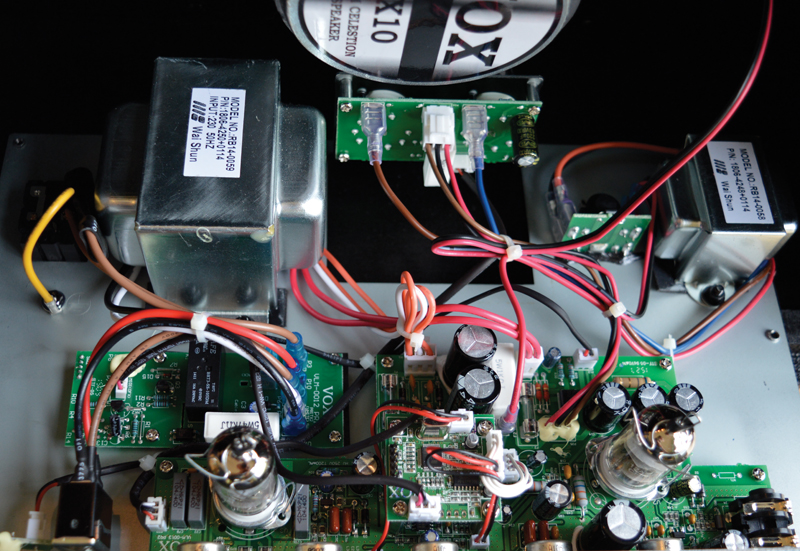 The C1’s tone controls respond and interact in a peculiar and slightly unpredictable way that’s not dissimilar to the old Vox top boost arrangement. Bass response seems to be fairly neutral about halfway up, so you can roll it off or boost it. Turning up the treble control increases high-frequency response much as you might expect, but beyond the halfway point the bass begins to roll off as treble is increased.

There also appears to be some degree of crossover between the controls, which changes the timbre of the midrange. So some familiarisation is required before you can start to get the hang of the tone controls, which means dialling in a sound can take a bit longer than you’d usually expect. It also means there is a greater range of tones than you might normally get from a regular two-band equaliser.

It was fortunate to have an original ’63 AC10 on hand to compare with the C1. Better still, the vintage example was retrofitted with a top boost module and the input resistors had been changed to AC15 spec to make it louder and brighter. Despite all the construction changes between the C1 and the vintage AC10, the tonal similarities were more apparent than the differences.

With the reverb turned off, the C1 can sound very much like a vintage AC10’s normal channel. Compared to the old one, the treble isn’t quite as sweet, but the C1’s bass response is considerably tighter and better defined. The most impressive thing is the way the C1 captures the harmonically loaded and slightly blurry chime that characterises the classic Vox sound. 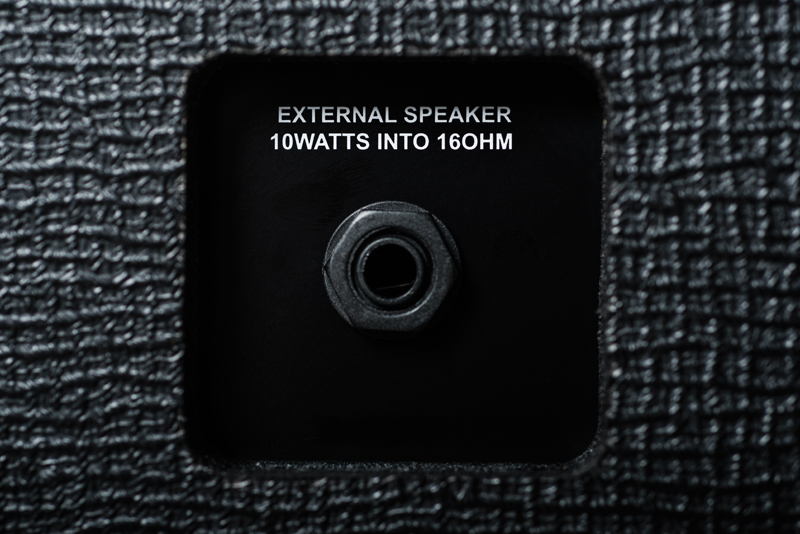 If you prefer a bit more vintage looseness in the lows, the C1 can oblige when you ramp up the bass control. The point is it’s something you can dial in to taste rather than something you’re obliged to live with. So we can say that the C1 does sound a lot like an original – but only up to a point.

In sheer gain terms, the C1 matches the old AC10 – then pushes things a lot further still. The C1 can get very overdriven, but the bass end holds together extremely well, and even with single coils the treble remains devoid of harshness. The C1 also cleans up really well when you back off your guitar volume, and the master volume does a fantastic job of reining back this surprisingly loud little combo to bedroom levels.

We compared the VX10 speaker with a Celestion Alnico Gold and a G10M. The C1 in combination with the Gold delivered all the old-school Vox jangle you could want and the G10M was smoother in the highs and fuller in the mids. The VX10 was voiced somewhere between the two and the C1’s cabinet provides more thump and bass extension than the open-back design.

On balance, reverb will probably be more useful than tremolo in a plug and play amp such as the C1, and it sounds pretty decent. The C1 may be an AC10 in name only, but it undeniably looks and sounds like a Vox. For Brit-flavoured chewy mids, jangly treble and classic valve grind at an affordable price, you couldn’t ask for much more. 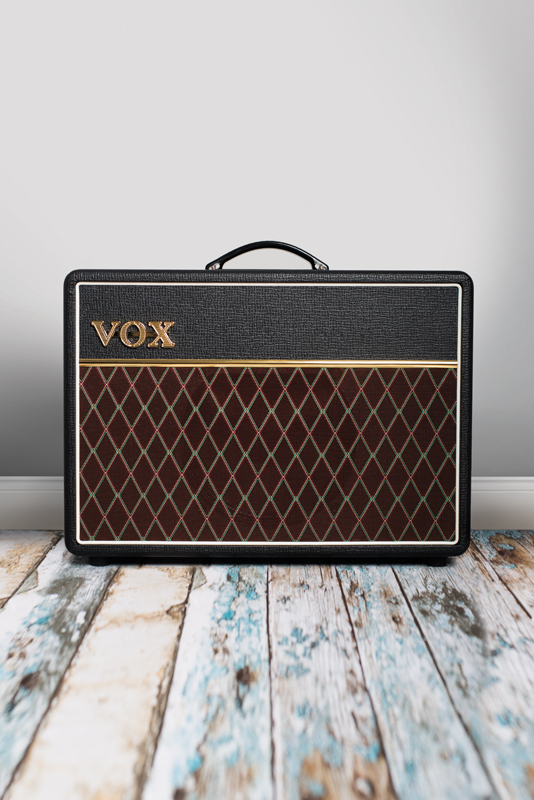 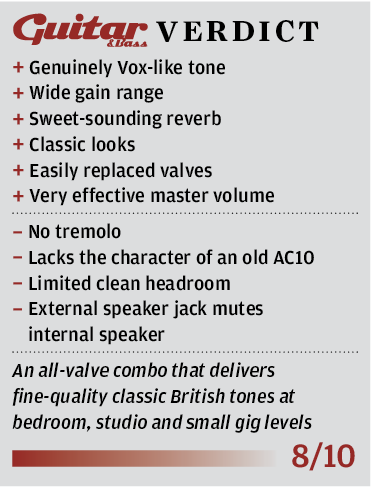