Can an S-type ‘tremolo’ emulate the tuning stability of a Floyd Rose without changing the looks or tone? Huw Price tests the Wudtone… 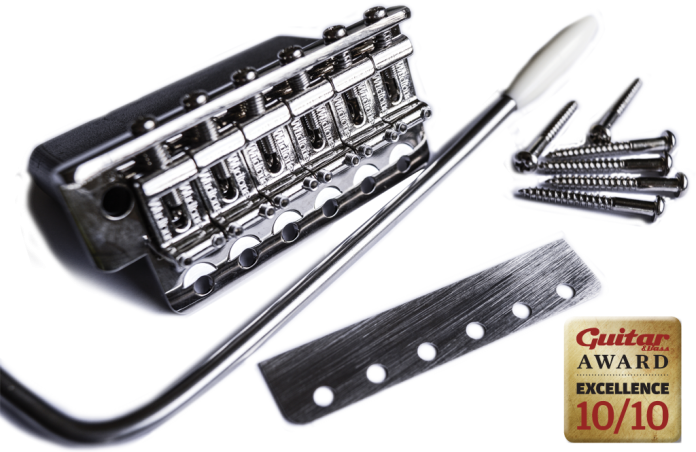 The basic operating principle of Leo Fender’s vibrato design was just fine, but over the decades, various attempts have been made to refine it. Some have been more successful than others and it is argued that Fender’s original version sounds best because the front of the bridge plate remains in contact with the body: base plates with knife-edge pivots tend to float above.

Andy Preston of Wudtone is both a guitarist and a trained engineer, so he has combined his experience in both fields to improve the feel, stability and sound of the Strat `trem’. Wudtone bridge plates come in two varieties ± the CP Vintage has traditional looks and materials, while the Holy Grail is made from higher tensile steel for increased dynamic efficiency and sustain. The point where the strings emerge from the block and wrap over through the saddle is a common breaking point. Wudtone plates are milled to form a string-friendly curve.

Observe a regular vibrato in action and you’ll notice how the front of the plate slides down the retaining screws as the trem is dipped. This occurs because the rear of the screw head fouls against the plate. Wudtone plates have angled recesses for the screw head, which allow the plate to pivot against the screws, rather than slide.To enhance bridge-to-body contact, Wudtone uses a 0.5mm stainless-steel whacker plate under the bridge plate. Like the screw recesses, it’s virtually invisible when installed and Wudtone claims improved feel and tone.

Wudtone sells the bridge plate, whacker plate and block individually, along with complete units that include springs and a claw. Various sizes and options are available for vintage reissues, plus American-, Far Eastern- and Mexican-made instruments and customised string spacing.

Fitting the whacker plate is quick and easy, and it doesn’t require string removal. Simply slacken the strings and hold them with a capo to maintain the tuner-post wraps. Then remove the springs and the six screws at the front of the bridge plate. Lift the vibrato assembly out, position the whacker plate, then reinstall the screws, springs and tune up.

I noticed a tiny bit more definition and clarity along with a lighter feel. It’s hard to describe, but everything felt slightly freer and smoother. Since the bridge sits a little higher, you will need to lower the saddles to compensate.

Next, I installed the plate and block assembly. I didn’t perceive any change in tone, but considering I was replacing a pre-CBS bridge and saddles, that can be regarded as an accolade. However, the Wudtone made my Strat’s tuning more stable than ever.

Wudtone makes some bold claims, but they’re all fully justified. It’s an upgrade that appears bone-stock unless you look at it very closely… but is it an improvement? It most certainly is. 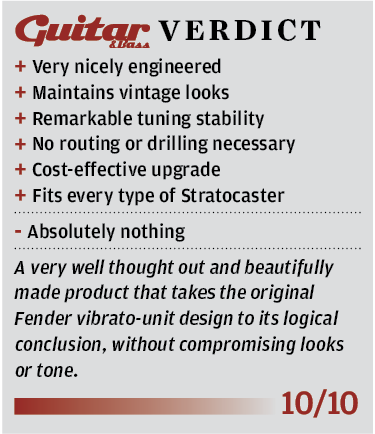