The Guitar.com Awards 2022: The Industry Awards

From sustainability trailblazers to tone democratisers, these are the guitar industry winners from 2022. 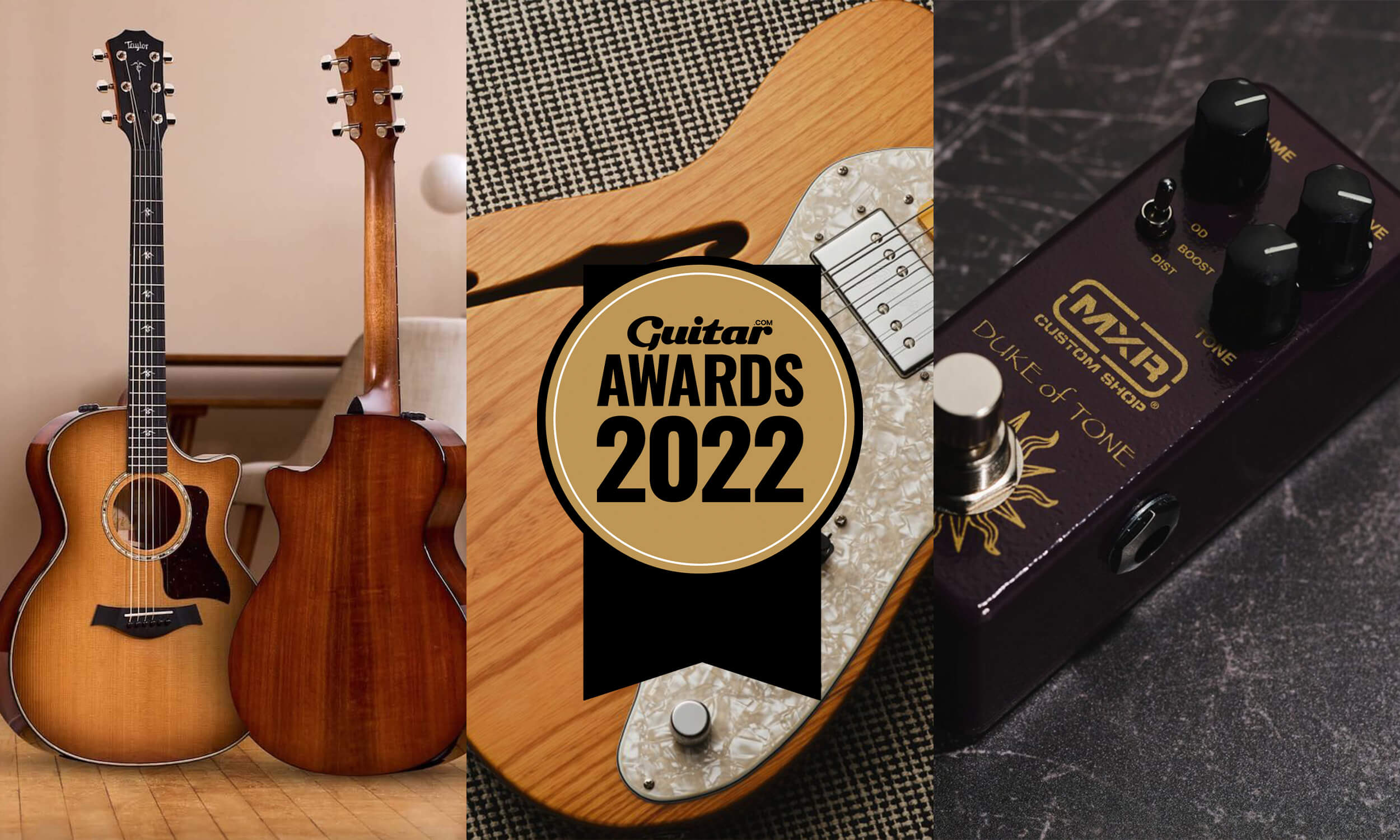 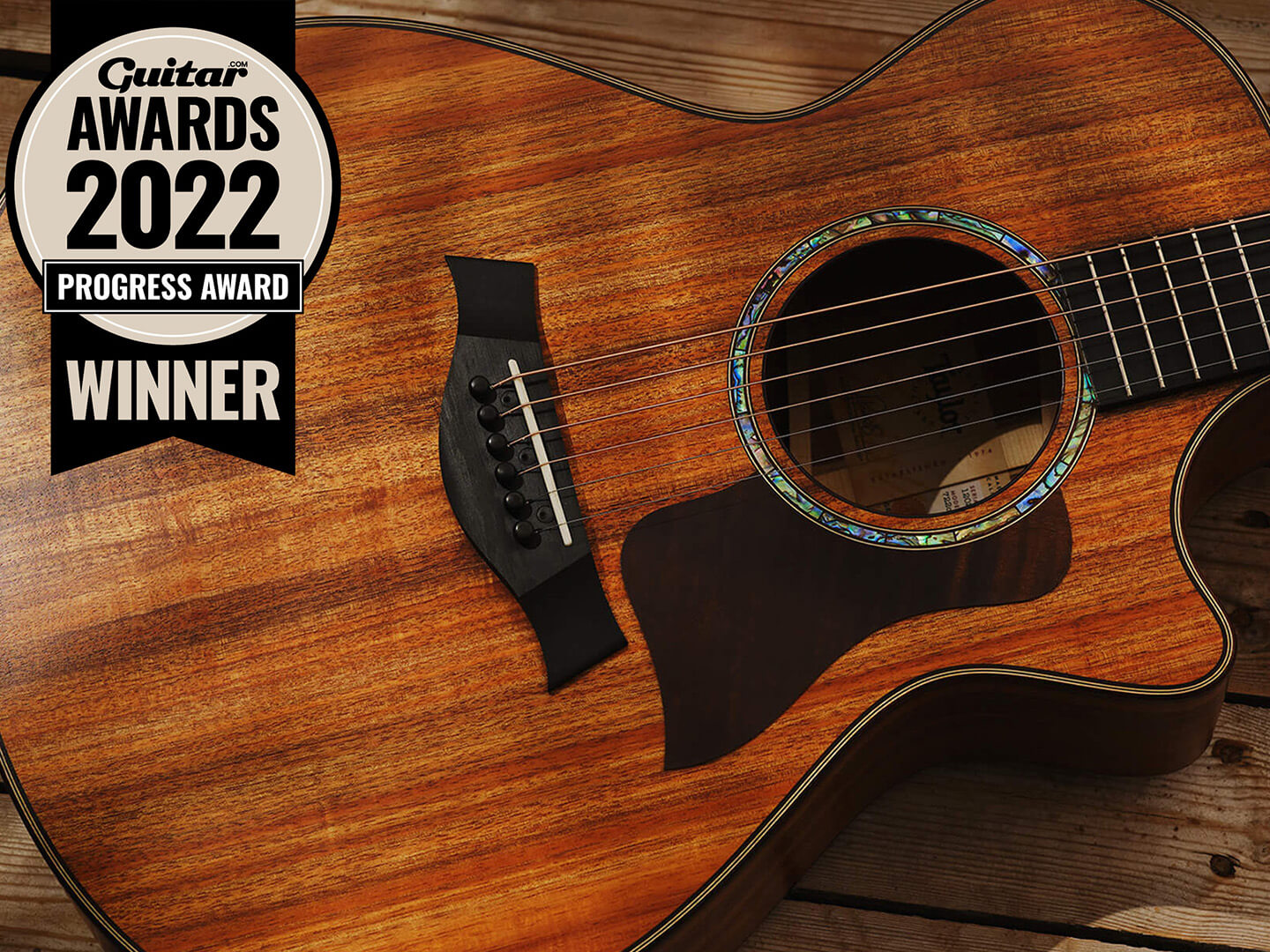 An old (and possibly apocryphal) Greek proverb says that, ‘a society grows great when old men plant trees in whose shade they’ll never sit’. While we’d never accuse Taylor’s founders Bob Taylor and Kurt Listug of being old men (as new CEO Andy Powers told us of the brand’s leadership trio, “We’re all present and accounted for!”) there’s little doubt that the pair, and the company they’ve built, has done more than any other major guitar brand in ensuring that people will be able to make inspiring musical instruments out of wonderful tonewoods long after they’re gone.

From the company’s trailblazing Ebony Project in Cameroon to its innovative cultivation and harvesting of koa in Hawaii, Taylor has been leading the way in how guitar brands think about the raw materials they consume and the ways in which they can reduce their environmental impact for many years now, but 2022 saw them take things to another level.
In 2022, Taylor launched the 700 Series Koa, a total overhaul of the brand’s flagship range that saw Powers reengineer the company’s hallmark body designs to make use of select-grade Hawaiian koa that both looks and sounds very different from a traditional spruce/rosewood affair, while their thin matt finishes also feel very different to a standard high-gloss acoustic.

It’s a risky move to present the ever-conservative world of acoustic guitar players with something so unconventional and say that this isn’t just a gimmick, but a core part of the top-of-the-line Taylor range, but it’s a statement worth making. Guitar building is changing, and will have to change even more as old-growth wood becomes increasingly scarce and expensive – and unlike in the electric world where a coat of paint can obscure the wood beneath, this change will be felt even more keenly.

Which makes the 700 Series Koa, and the sourcing of new tonewoods from unexpected places – such as the new Urban Ironbark 500 Series instruments also launched this year – all the more important to the future of the industry in general. These initiatives aren’t just helping Taylor educate its own audience about the sonic excellence of alternative tonewoods – they’re laying the groundwork for a more diverse and sustainable future for the industry as a whole, even if that alienates some traditionalists in the short term. It’s no small thing, and in generations to come we may all be reaping the benefits. 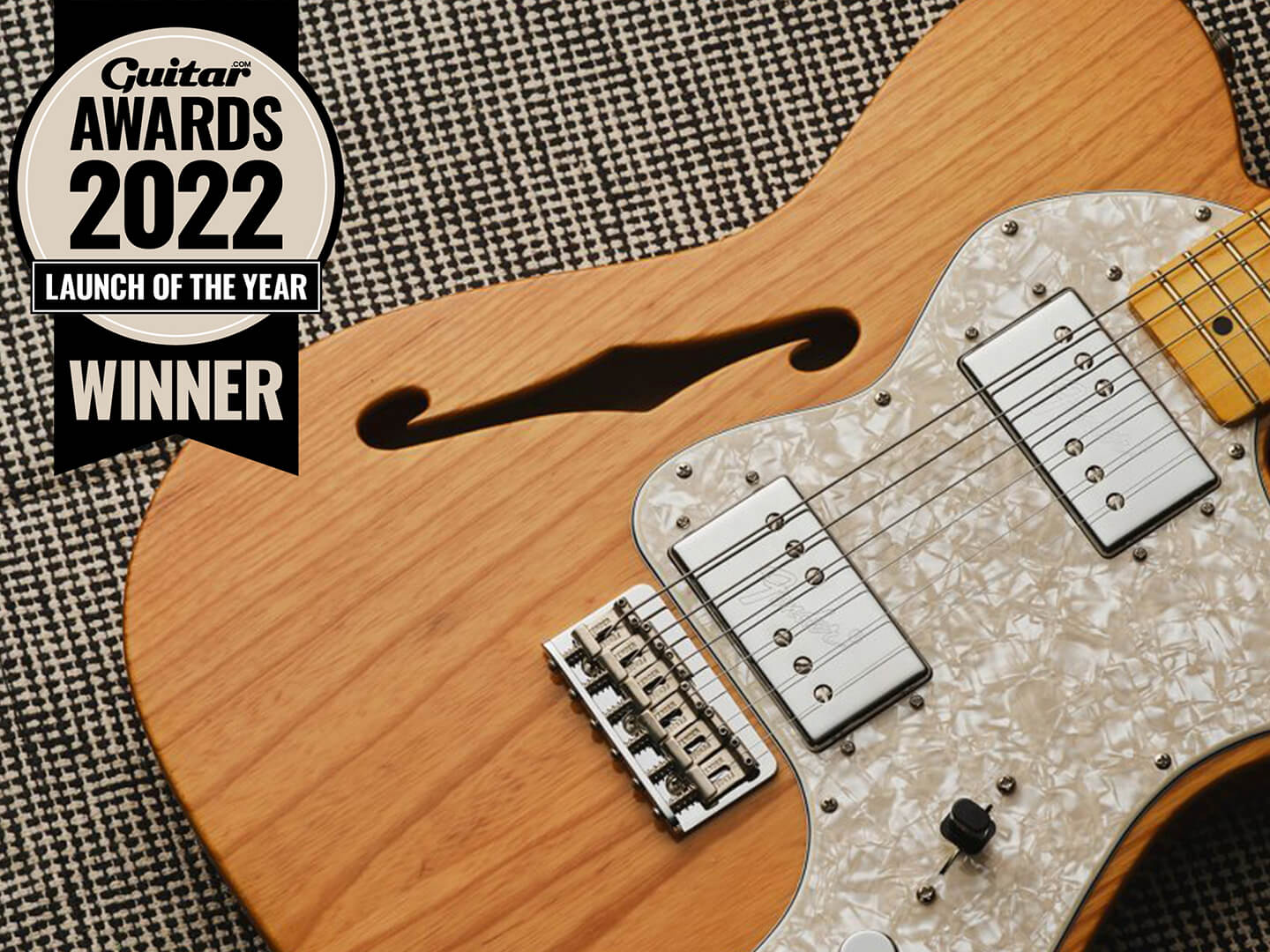 As fiction’s favourite advertising genius Don Draper once opined, “It’s useless to be creative unless you can sell what you create”. Back in the day, a clever ad in the back of a catalogue or a magazine would be all you needed to shift product by the boatload, but in 2022 we live in a strange dichotomy – there have never been more ways for brands to reach their audience, yet it’s never been harder to capture their attention.

It’s been a strange year for Fender. After decades of unprecedented growth and dominance in the guitar world, 2022 saw company-wide layoffs – most notably at the brand’s US factory – that spooked a guitar public used to seeing nothing but good news coming from the guitar giant.

It’s all the more impressive then, that barely a few short weeks later, Fender was rolling out perhaps its most important launch in a decade, and doing so in a style and fashion that reminded everyone exactly how you make people want an electric guitar in 2022.
The original American Vintage guitars have entered into the modern classic territory since they were discontinued in 2018, and so enthusiasm for the range’s second coming would always have been high.

But to ramp that up with a Patti Smith-narrated launch video, celebrating not just the enduring power and purpose of the Golden Era instruments that the AVII range was meticulously recreating, but of the guitar itself, is goosebump-inducing. Follow that up with a campaign that brought in everyone from James Bay to Jeff Beck to the Brothers Osbourne and you have a launch that goes beyond simply trying to sell you a guitar, but one that sells you the idea of guitar as an ever-present in pop culture.

And that’s before we even get into the fact that the guitars themselves have broadly been hailed as a triumph, giving vintage obsessives guitars that truly do look, sound and feel almost exactly like the instruments that rolled off the production line decades ago – without the five or six-figure pricetag. 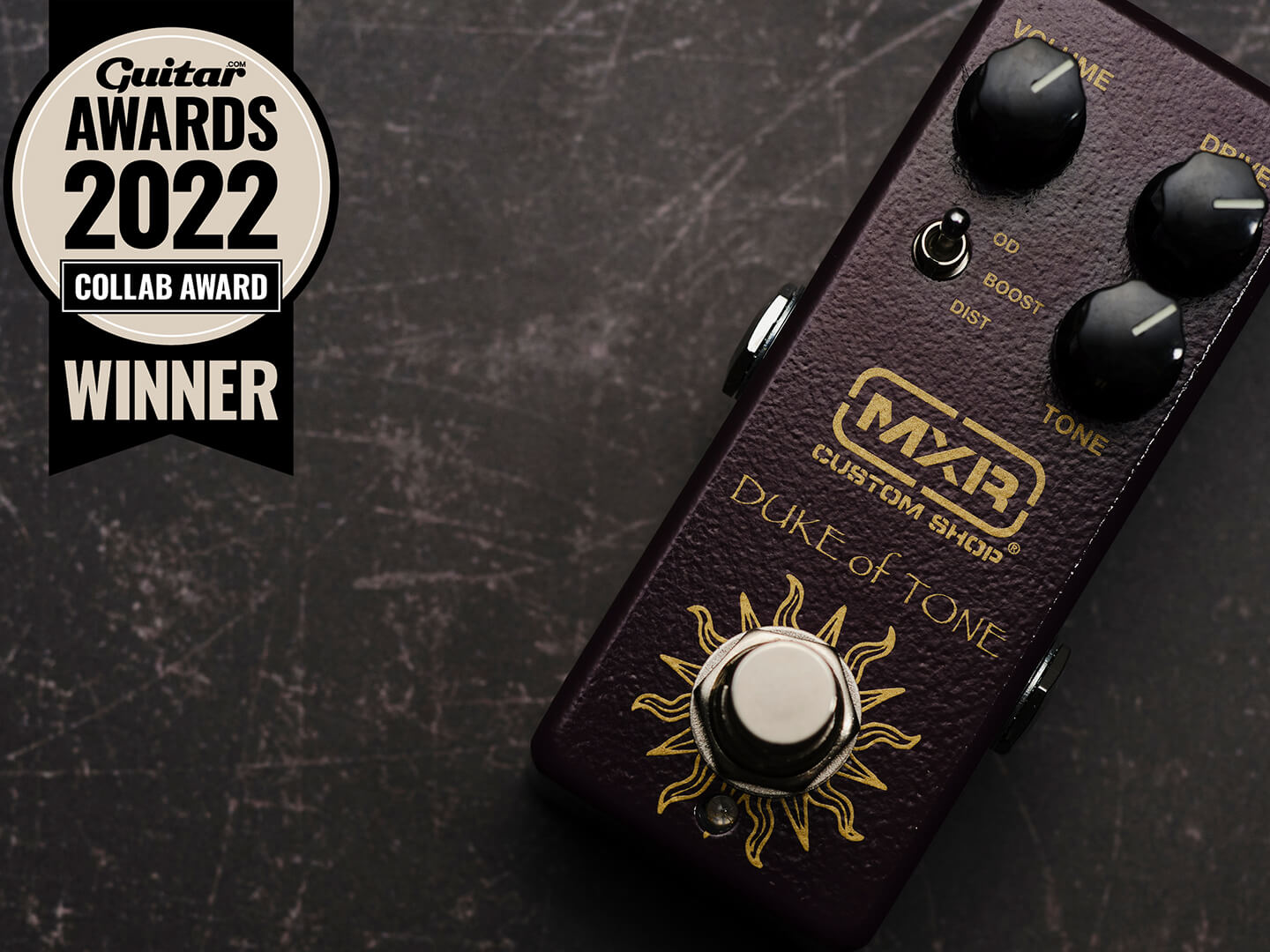 Two heads are, as the saying goes, better than one – but the guitar industry has always been at the vanguard of collaborative design, going all the way back to when Les Paul and John Huis teamed up to make a solidbody guitar, and beyond.

Pedals have become a hotbed for collaboration in recent years, with brands putting their heads together with artists or other builders to create interesting and unique products that might not have even been conceived otherwise.

But 2022’s most exciting collab did something altogether different – it brought a sound that had previously been the preserve of the very few and effectively democratised it, giving everyone the chance to sample the very best of modern boutique pedal building.

That product is, of course, the MXR/AnalogMan Duke Of Tone. The AnalogMan King Of Tone is one of those mythical pedals that you see on pro boards everywhere, but good luck getting one – unless you’re prepared to pay eye-watering used prices, the current waiting list for a new KoT is four years.

All of which made even the prospect of the Duke Of Tone – effectively half a KoT in a mini-pedal enclosure – exciting before we even played one. But when we did, we couldn’t quite believe it – this wasn’t just a ‘quite close’ take on the original, it was remarkably close, with some tweaks and changes to the layout and functionality that some might even prefer to the real thing.

To do all this in a pedal that is under £200, and isn’t limited in any way, is a gift to the ordinary guitarist who couldn’t contemplate spending £700+ on a pedal, or waiting four years for one. As the AnalogMan himself, Mike Piera told us, the purpose of his team-up with MXR was all about “Getting our pedals out to more people all over the world.” Thanks to Mike and his fellow pedal pioneer Jeorge Tripps, we can all enjoy the fruits of his genius for the first time.