Brad Williams’s work recording guitars in the television industry has seen him gather a vast collection of instruments. 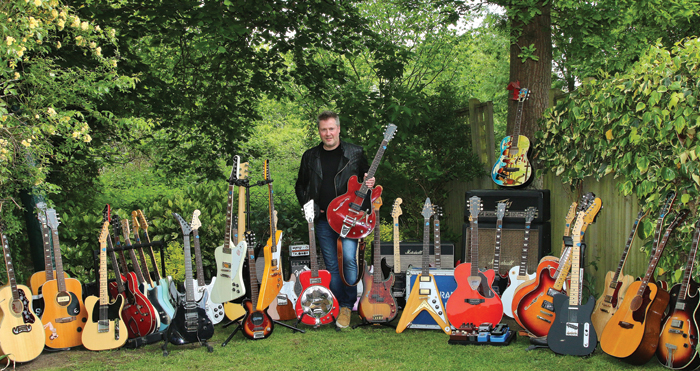 Brad Williams handles audio sound designs for an international TV company, a job which frequently involves recording guitars and necessitates getting an authentic sound from a classic model from a particular era. Naturally, this has led to Brad amassing a sizable personal guitar and bass collection over the years – which has also served him well in his secondary career as a live and session guitarist.

Brad takes up the tale and takes Guitar & Bass on a guided tour through his enviable collection: “I’ve gathered quite a few for their specific working abilities, which have also proved invaluable within a career as a touring guitarist and session player.

“When I was just 10, I was obsessed with recording my own songs, making amps out of old stereograms and guitars, including a Telecaster I shaped from my mum’s kitchen bread board.”

“My older sister played The Stones, Zeppelin, Lynyrd Skynyrd and the like flat-out in our house. I find it a bit scary now as an adult, how I understood it all, being so young.”

“The turning point was AC/DC. When they were a raw band, I played Bad Boy Boogie, from the If You Want Blood… album a billion times. I was pleased that I had found something that I could identify with, something I felt was mine.” 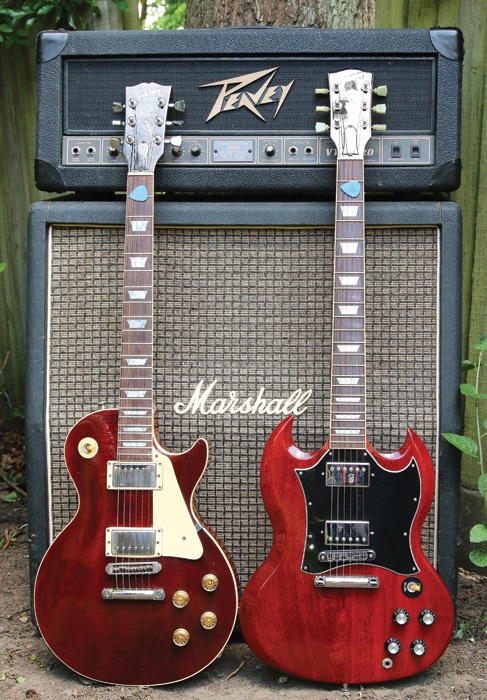 “This SG dates from 2008, and I feel it is the only way that I can get close to Angus Young’s sound. I’m sure all that mahogany, scale length and body depth is all part of the sonic equation.”

“I was always very out of step with what was fashionable in the guitar and amp world, mainly because I couldn’t afford it. This was in the 80s, when guitarists were enjoying the pointy headstock period, hence I got a really good deal on this Gibson Les Paul, which I used through a beaten 60s Marshall half stack with a wah pedal. Both have been with me from the beginning; all my gear is treated with respect, although I use it like I would drive to work in a car every day.” 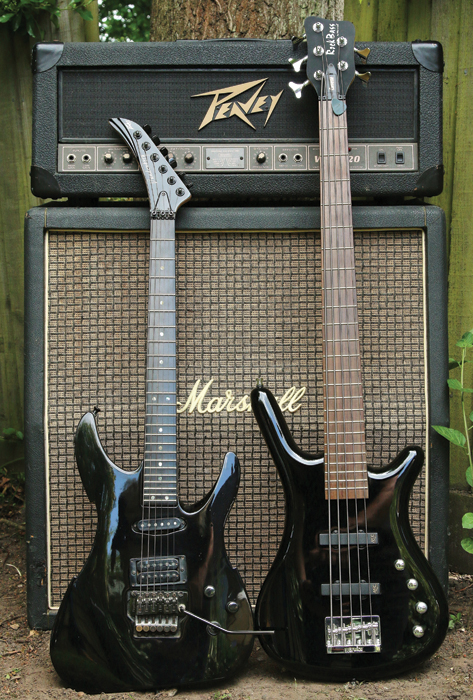 “This would be pre-Slash and before a Les Paul became fashionable again. Then I toured and recorded with Pigs From A Gun, and with Mike Peters from The Alarm with a Peavey Vandenberg. The Floyd Rose still comes in handy for deep dive bombs here and there when I record TV and film soundtracks.” 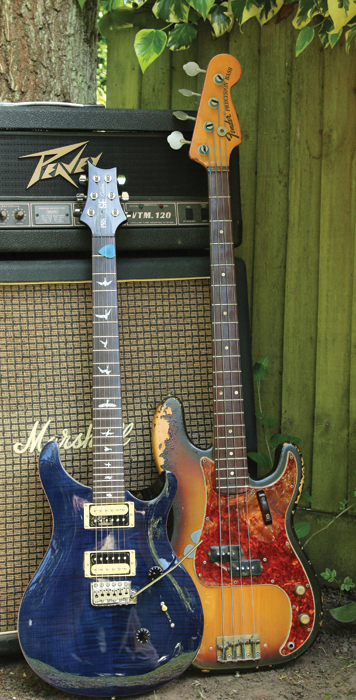 “It still sounds awesome through this devastatingly loud Peavey VTM 120-watt head. Eventually, I had a ton of session work at some cool studios, including The Church – run by Dave Stewart. My dear old ’68 Fender Precision is a first choice every time for bass sessions. It’s really dried out, which I’m sure contributes to the tonal character.” 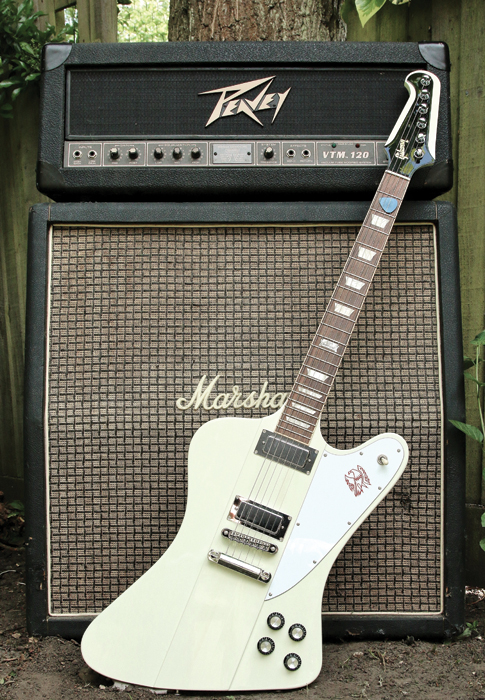 “I kind of relate this Gibson Firebird 2012 Anniversary model as a show-off Tele. I had an older one with banjo pegs, but I couldn’t get on with it.” 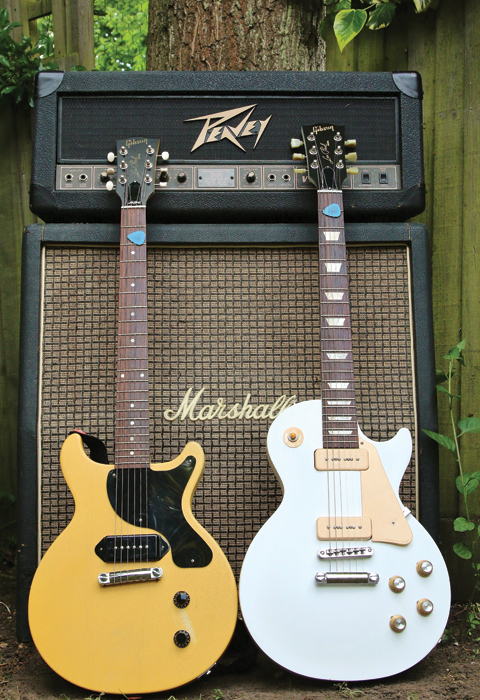 “The bass player in my band, Stone Blower, had a Thunderbird bass. They’re great stage guitars. I adore the mini humbucker at full tilt, as I do a decent P-90, which I have here on this Les Paul Junior. It’s a Japanese import with a slightly slimmer body; again, I love the whole simplicity Tele-type concept. Best of all, though, the P-90 just gives that little extra grunt.”

With a job as exacting and demanding as Brad’s, it’s essential that his guitars are as reliable as possible, as he explains. 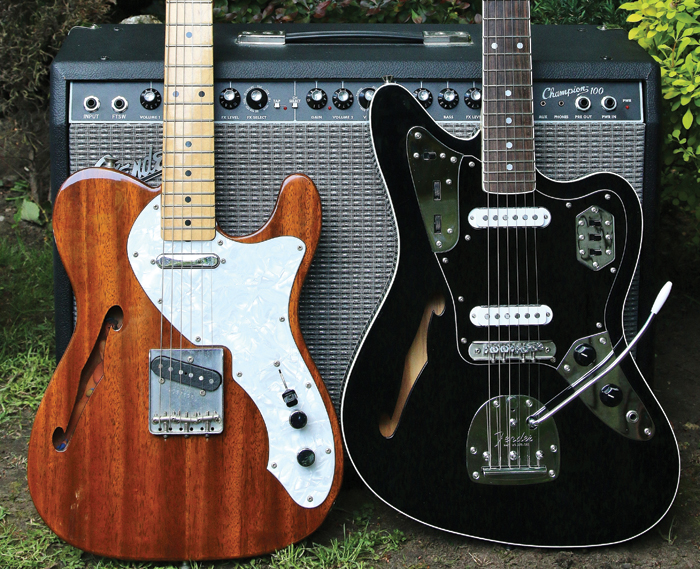 “I need guitars that play and sound great and don’t constantly need setting up or tuning, and if I want a real twang, it’s a Tele every time. In relation to Malcolm Young’s strong rhythm playing, although he used a Gretsch, of course, I acquired this mahogany-bodied Thinline model first. I love the simplicity, sound and reliability. I think the only limitations on a Tele are technical ones, which I’ve overcome by replacing hardware, upping the internal screening, and installing over-wound pickups; my favourites are some units from The Creamery.”

“This Fender Jaguar was a Japanese-only model, from 2012, and a bit of a hybrid with a thinline-type body with binding and a 24-inch scale. It’s a perfectly balanced guitar, both physically and sonically.” 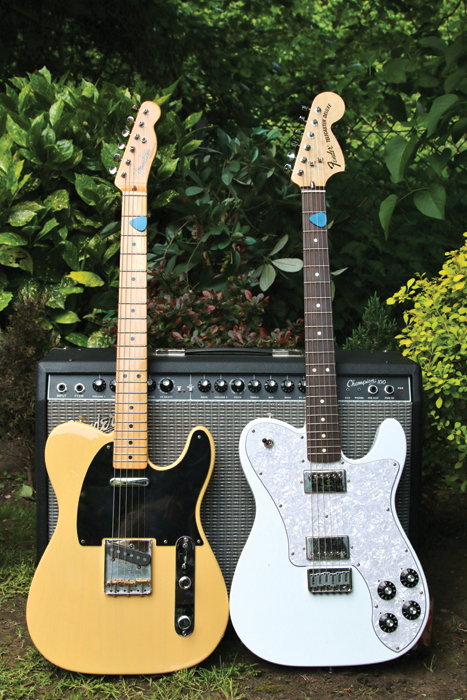 “I also have this Mexican Baja Tele. I don’t see any reason to pay for a more expensive model. I originally bought this Chris Shiflett Mexican Tele Deluxe signature model, not for the Foo Fighters connection, but with the intension of modifying it, but it’s too good to change and I think it outshines some of the USA-made Fenders for the price.”

While his collection contains so many ‘essential’ guitars, Brad admits that he still has a yearning to construct his own designs. 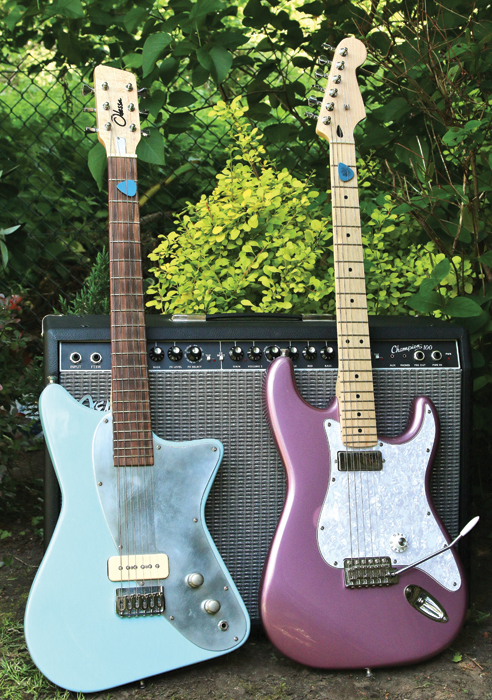 “I’d always thought how simple I could make a Strat look,” he explains. “I call this next one a Strelecaster, with a single Tele neck pickup fitted to a Strat body. Inside, it has what they call the swimming pool routing, it’s cavernous, so there’s quite an acoustic vibe, a real unique tone. It worked so well, I fitted an over-wound Firebird mini humbucker in the neck position to my ‘Firecaster’, that’s finished in Burgundy Mist.”

“I love classic guitars, but I like something unusual as well, like this ultra-cool Odessa DeadBeat finished in Bermuda Blue. This guitar sounds amazing – British builder Mike Wiltshire is the luthier behind these.”

“I gave him the measurements for a huge neck profile, we talk about a baseball bat neck, but this exceeds that by a mile, it’s massive. It’s a total tone machine, with an overwound Lollar P-90. The body is European ash, the neck is maple and we used pau ferro for the fingerboard, hence it ain’t no lightweight.” 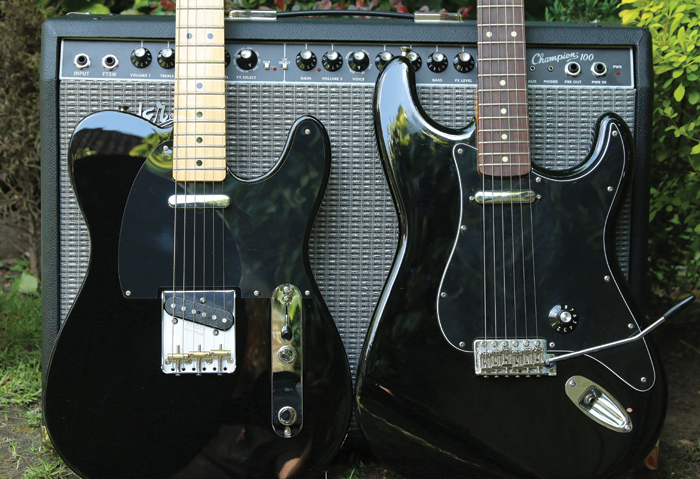 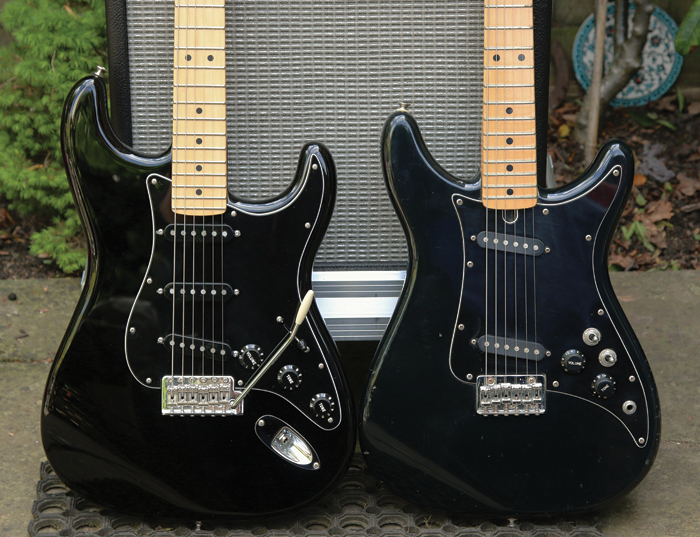 “I have a few black guitars; this Strat has a nod toward Dave Gilmour’s, and is fitted with Texas Specials. I like the 70s vibe with this one, there’s a sort of Stranglers vibe about it, like the earlier black Baja Tele. This Fender Lead II is a bit like a cut-down Strat. I believe Eric Clapton’s model was the first to start the Hard Rock Cafe vibe with guitars on the walls.” 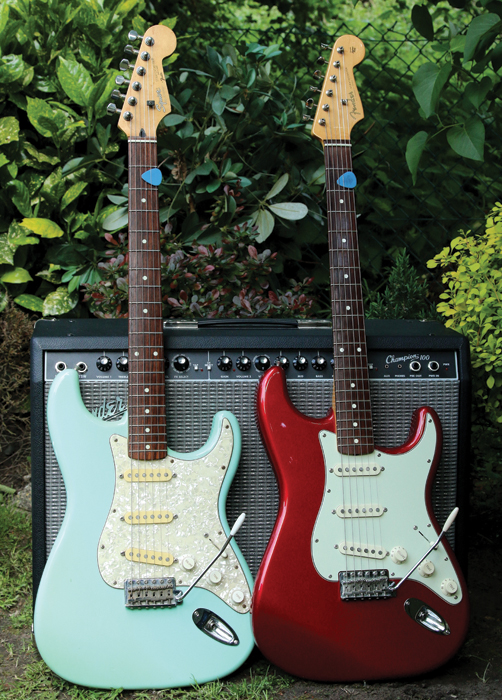 “I fell out of love with Strats for a while after having a host of different models, so I thought I’d just have a Squier for the sake of it. This faded Daphne Blue model 60s reissue was so good it remained a favourite for a long time, and was used on a lot of film scores.” 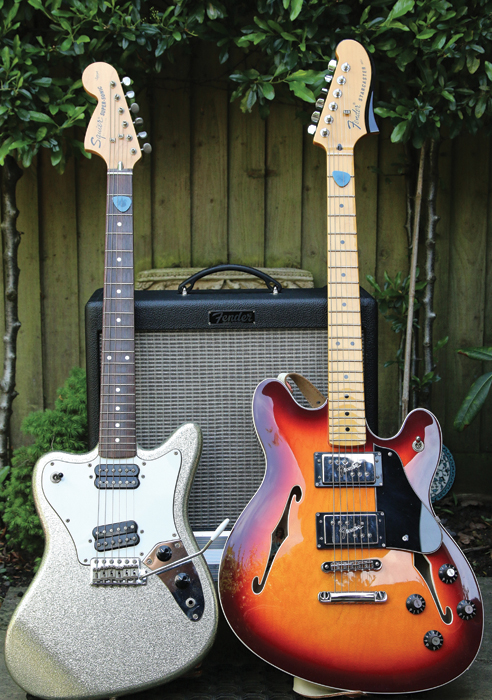 “So Strats are back in fashion for me. I’ve always been a fan of Stevie Ray Vaughan and Hendrix; this Squier Super-Sonic has the upside-down, left-handed vibe for a right-handed player. The silver sparkle finish has toned down to shades of gold over the years.”

“I love the concept of this guitar and the playability, but it just doesn’t sound that brilliant, and although it would solve the problem, I’m loathe to change the pickups.”

“Thanks to the likes of Radiohead’s Jonny Greenwood and Dave Keuning from The Killers, the good old Fender Starcaster has had a new lease of life; this one is a reissue and leans towards a slightly quirky theme, which I like. It’s cool-sounding with the Wide Range pickups. I’m looking out for an original at the moment.” 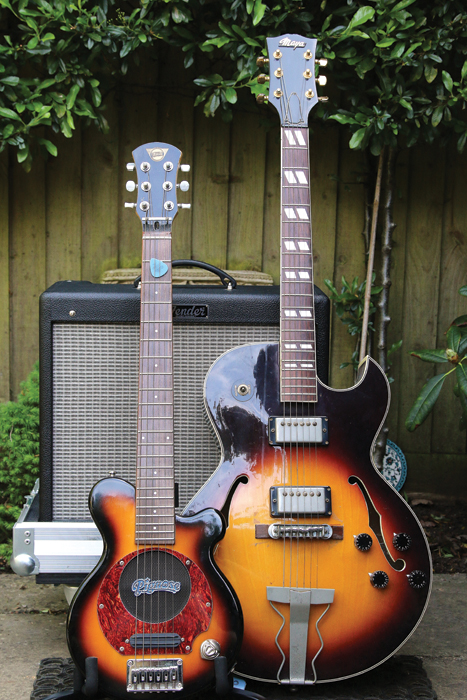 “I have a few semi-acoustic guitars, most are quite new, although this 70s ES-175 copy made by Japanese brand Maya, is a little tired now. I like to feel the vibrations from a semi-acoustic against your body and the fight against feedback.” 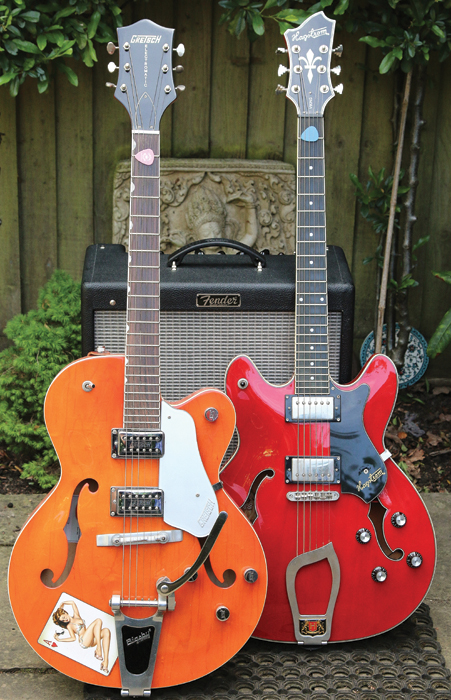 “This Hagstrom Viking II semi is beautifully made and very versatile, handling anything from country to heavy metal.” 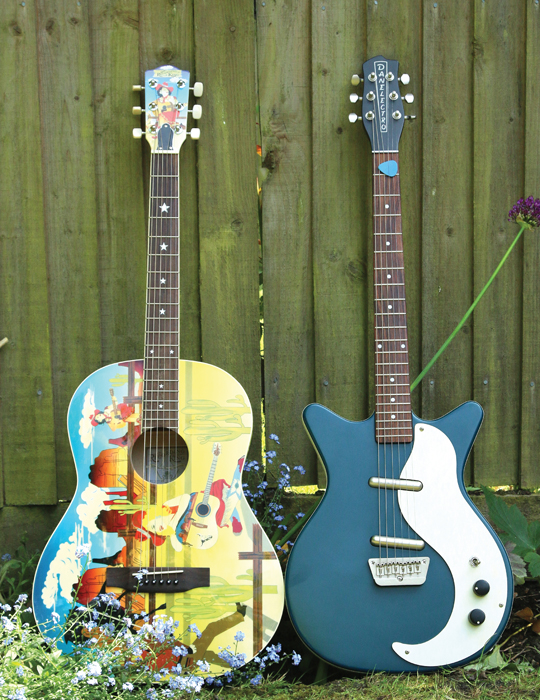 “I originally bought this Recording King Rodeo Sweetheart with the cowboy theme for my kids, but I thought it was so cool that I’ve nicked it back. I just like ladies on guitars, and several here have the vintage-style pinup stickers on.” 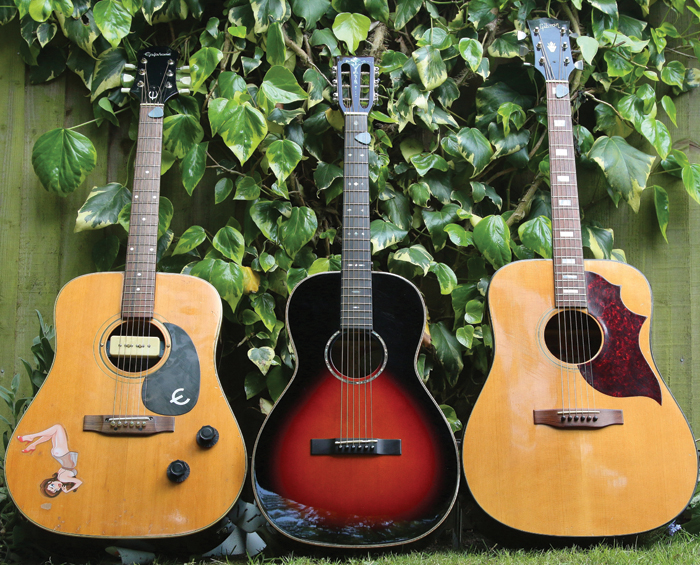 “I have a few acoustics that are primarily for writing and recording with, including this Epiphone Jumbo loaded with an over-wound P-90 and controls off an old army field radio from Nebraska, and my ’72 Gibson SJ Deluxe Gibson; this guitar is such an inspirational writing tool, and my burning-building guitar.” 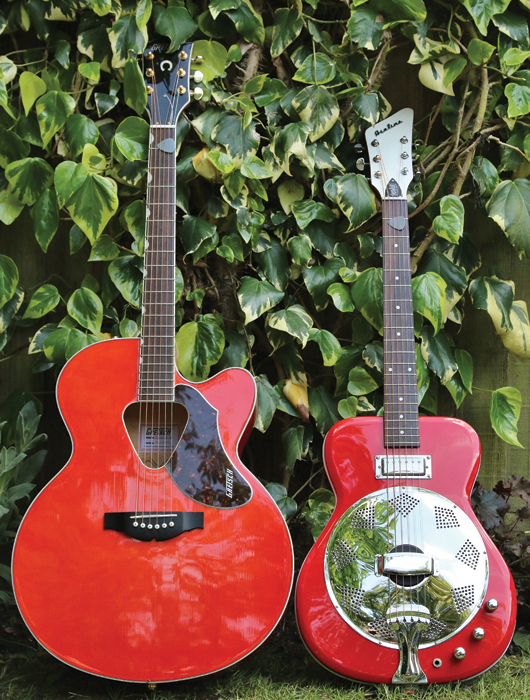 “I’ve been asked many times what comes first for me, cosmetics or sound. It’s both, like this Eastwood Airline – it sounds fantastic and looks amazing. Jack White is one of many players who have given retro catalogue guitars the exposure they deserve.” 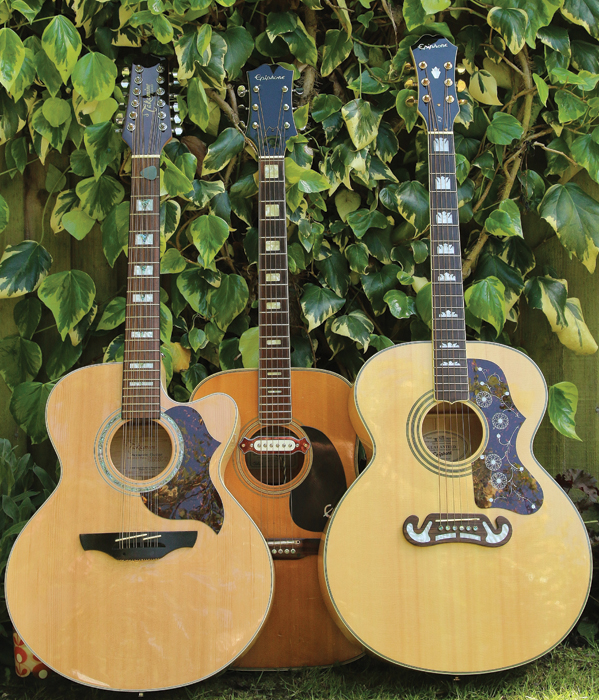 Brad’s collection also includes a Takamine 12-string, an Epiphone EJ200, two Epiphone Sheratons and a P-90 loaded Casino, and finally he strikes a cool pose with his favourite Gibson semi-acoustic, an ES-330. 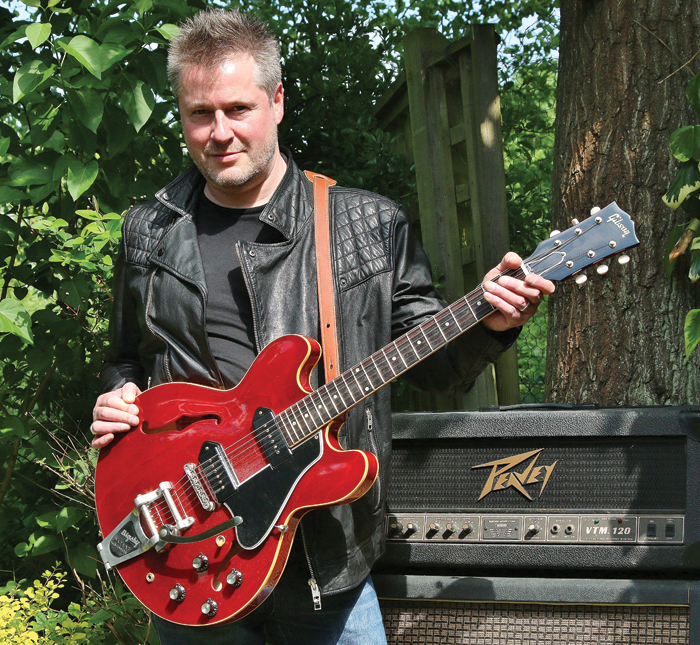 “Yeah, it’s a limited-edition Gibson Memphis VOS ES-330L, the closest – I feel – to a vintage classic. I love the Cherry finish. I feel that a lot of the original spec contributes to the sound – from the under-wound dog-eared P-90s to animal hide glue used in the construction.”

“Once again, it reflects my need for authentic guitars that deliver original sounds, which is so important in my job. I hate it to sound pretentious, I’m not against new gear, but I’m attracted to the original birth of rock music sounds. I personally feel that  you can’t replicate them without anything but the real thing. I’m lucky, as a lot of the gear I have here I originally bought as a necessity, and it has become vintage with age.”