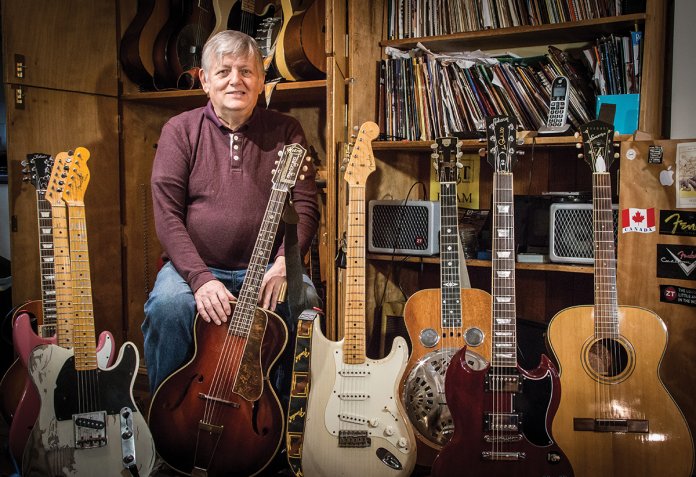 As a guitar teacher, Phil Armitage prefers the personal approach rather than teaching over the internet. His career as a teacher began in 1993, when he first started as an examiner for the London College Of Music, having since taught in schools, colleges and even prisons.

“The London College of Music looked great on my CV,” says Phil. “And actually started off my career as a guitar teacher. But a few years ago, I noticed I was the oldest geezer walking down the corridors, so as soon as I got my pension I thought, I’m having a change. “The idea of packing up as a teacher didn’t enter my head, so I decided to teach from my studio here in the North of England.” His new way of doing things also led to a reordering of his guitar collection, in the rigorously organised way that exemplifies a logical teacher’s brain. 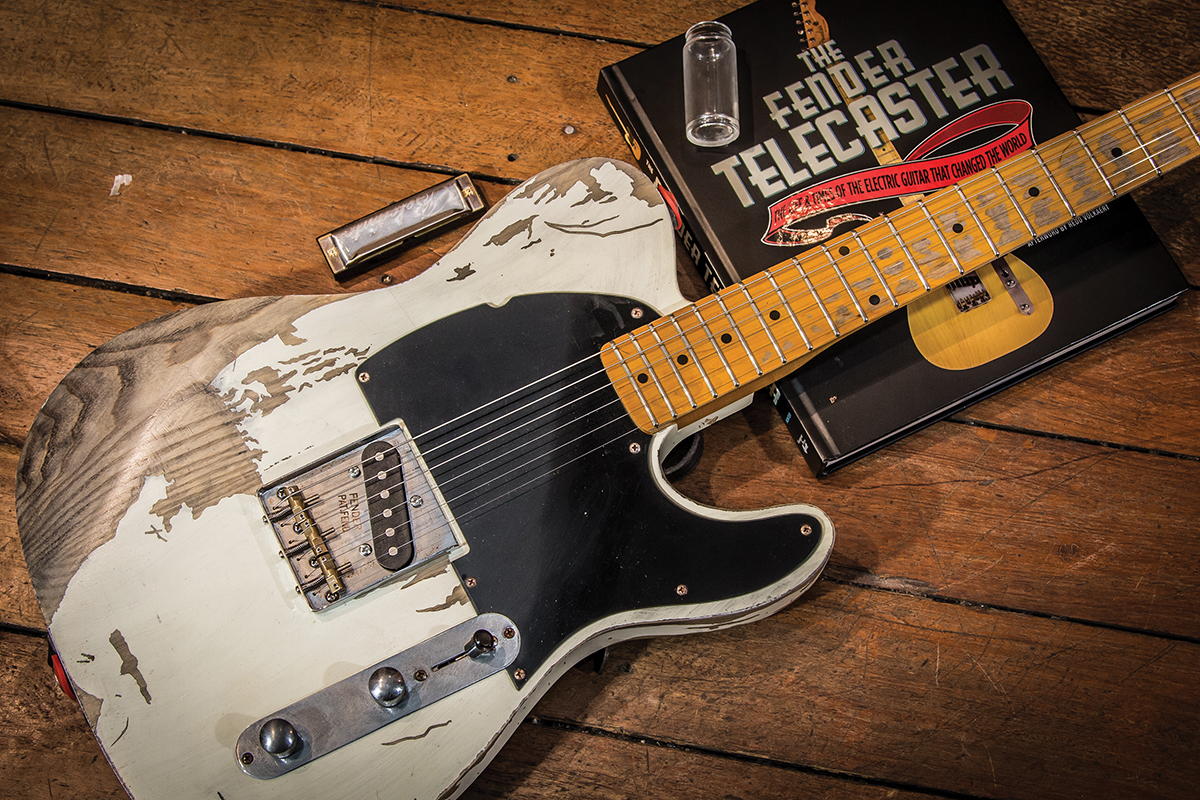 “As a guitar teacher and a performer, my philosophy is, while I’m teaching music, it’s also important for me to play in front of an audience, and this new move also gave me the opportunity to organise and divide my guitar collection into four categories,” he explains.

“I have a separate cupboard for quality gigging guitars – these are models that I look after, but are not that valuable – another cupboard houses the all-important guitars for teaching, another for guitars that I hope will appreciate in value, and one for guitars that have personal or sentimental reasons. I’ve spent years slowly trading my way up through the ranks and I’m always on the lookout at guitar shows across the country for that special deal. When a new one arrives, there’s always the honeymoon period when I think it’s the best of the bunch, but if it sits in the cupboard for six months, I’ll move it on.” 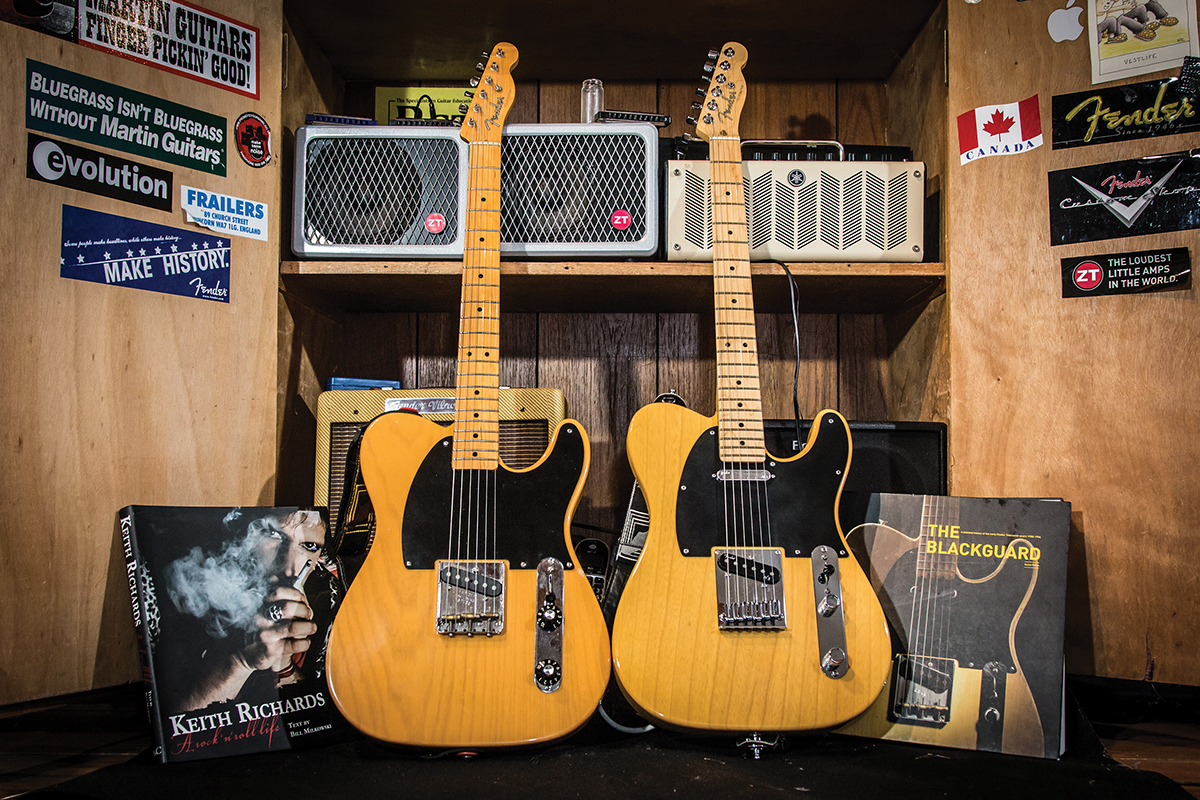 Phil’s ’52 Esquire reissue (left) and his Deluxe Tele, both in Butterscotch finish

Phil is prepared to teach the guitar in any style and while folk and classical are always a breath of fresh air, as you might imagine, rock and blues are the genres that inevitably lead the way.

“There are a lot of blues roots in my guitar collection and while I’m happy teaching all styles, it’s a joy of joys for me when a student wants to learn blues on an acoustic guitar. I love teaching and talking about all the early iconic blues players, John Lee Hooker, Jimmy Reed and Big Bill Broonzy for example and the thumb picking style of Texas country bluesman, Mance Lipscomb, who played the same model Harmony Sovereign as I have, which dates from around 1957.

“It took me 10 years to find one in this condition with a solid spruce top and mahogany back and sides. Lipscomb had a style where he played with a thumbpick while palm-muting the low E string. This is also the ultimate test to see if an acoustic qualifies as a really good blues guitar, if the muted string barks and sustains, that’s a good ’un.” 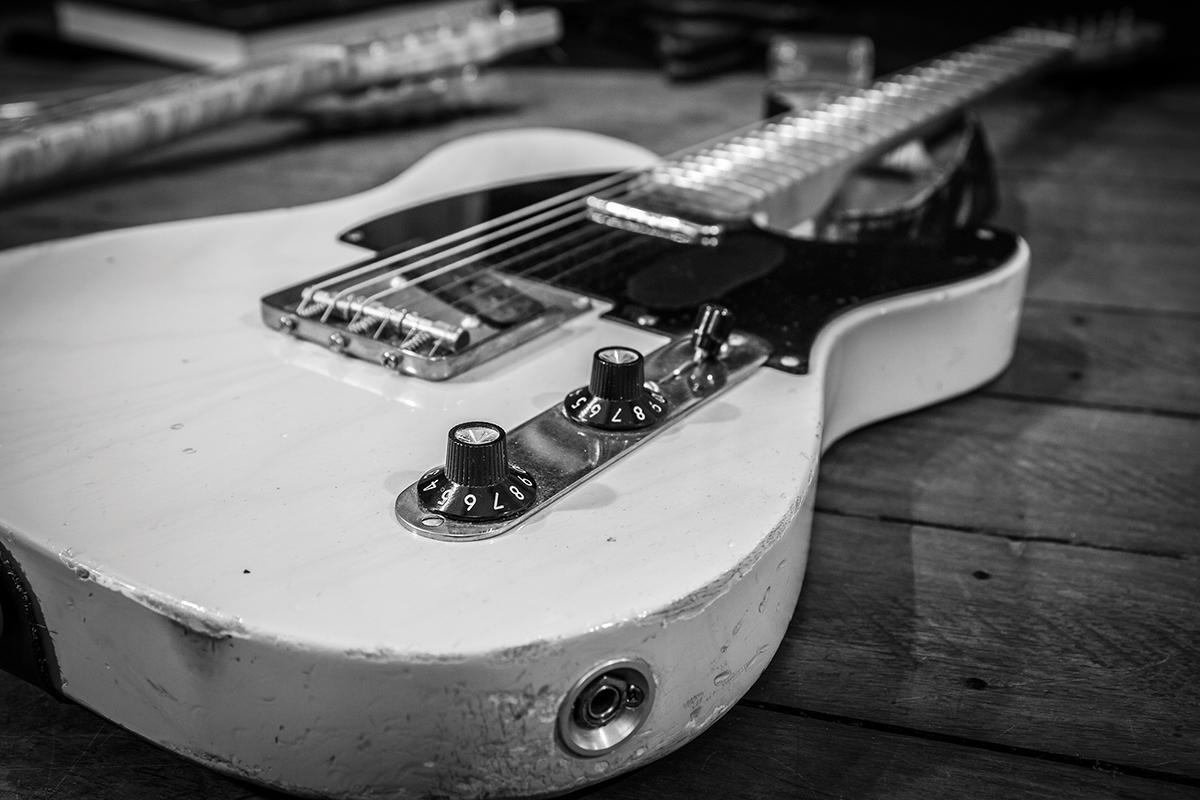 The Sovereign isn’t Phil’s only Harmony, however, but his Metro Deluxe is something of an enigma. “It’s a bit of a mystery as I can’t find much information about it,” he reveals.

“Judging by the detail of the art deco inlays in the headstock and fingerboard, I’d say it was a typical f-hole acoustic archtop from the late 30s. It would have originally been used to belt out big chords in a dance band or similar. The action is way too high, but I’ve decided to leave it alone as it works well for slide. I still think that if you want to get as close as you can to the original sound, you really need a guitar from that period to do it with. A lot of these models have ladder bracing which I feel plays a major part within the sound of these classic acoustic guitars.” 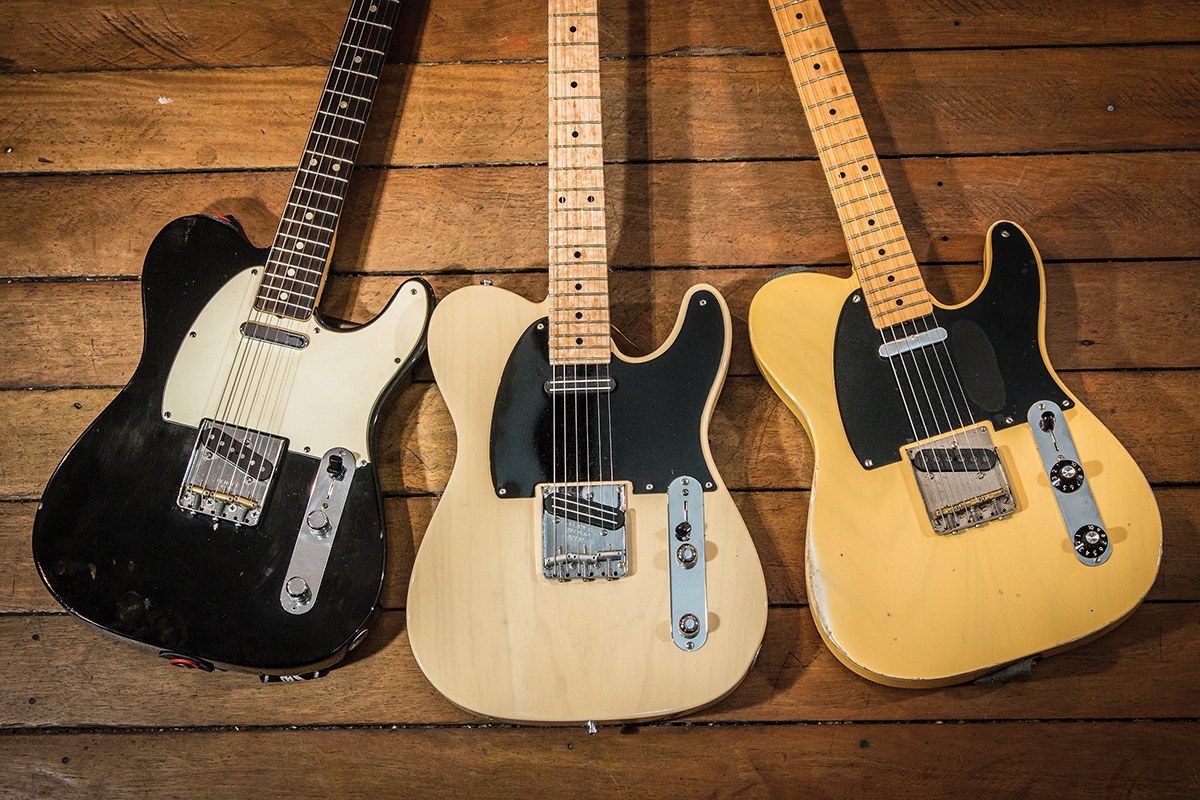 Phil is of course well educated when it comes to guitar knowledge, but he can still recall the first time he heard an electric guitar as a 12-year-old lad…

“It was Buddy Holly,” says Phil, “I knew nothing about electric guitars let alone what a Strat was or looked like, I just adored the big, percussive clear guitar tone he had. The technical turning point was when I heard Green Onions by Booker T and the MG’s. Steve Cropper’s guitar break on that Tele lit it all up for me.”

The impact of Fender’s two premier models on him soon led to him getting some of his own. “I then took an interest in the guitars themselves and the different sounds that they could produce. I started to realise that all the music I liked involved a Tele or a Strat, even the back beat on most of the Motown records was played on a Tele. I have six at the moment which have their own positions within the cupboard categories!” 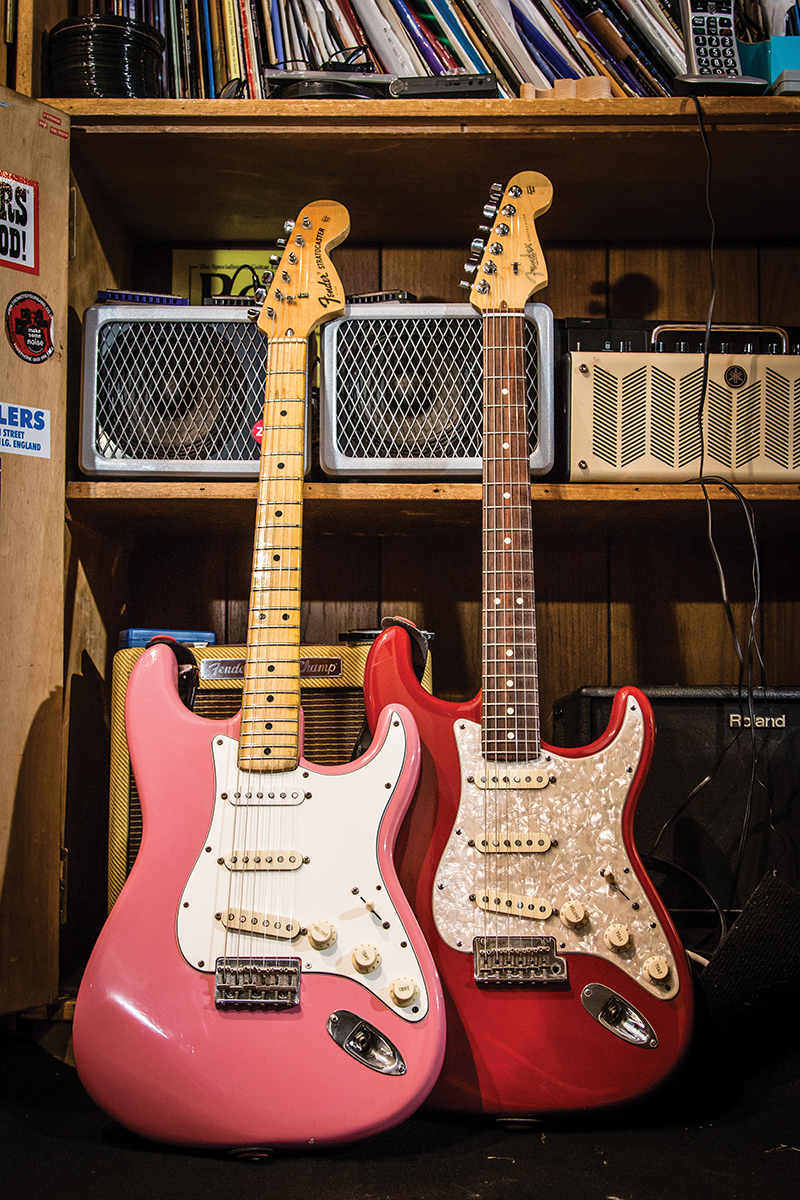 Phil’s ’73 pink Strat is his favourite, but he also loves his 2011 Thin Skin in Dakota Red

Certainly from the ‘sentimental’ cupboard is his black 1971 Tele. “It was my second electric after my Watkins Rapier 44,” Phil explains. “It was five years old when I bought it, and in bad shape – I think it must have belonged to a punk! I put up with it for a while, but eventually had it resprayed and refretted.

“My ’51 reissue Relic Nocaster dating from 2003 is another from the personal corner – I purchased it with some inheritance money, so I think of this one as my dad’s guitar. I like a light weight guitar and every little helps and, as you can see, I’ve replaced the metal control knobs with plastic Fender amp controls. This is my favourite Tele which I’ve been using for teaching electric guitar ever since.”

Another to get the amp knob mod is his butterscotch ’52 Esquire reissue. “I actually prefer these controls to the originals,” he affirms. “I picked up on the idea after seeing them on the Muddy Waters signature Tele. I really like this Esquire, I feel there’s something different on how you approach a one-pickup guitar. There’s more of an awareness as you learn how to focus, on how hard to hit the strings for example and what is achievable from the guitar. I can almost relate this by to walking around the house with one eye closed!” 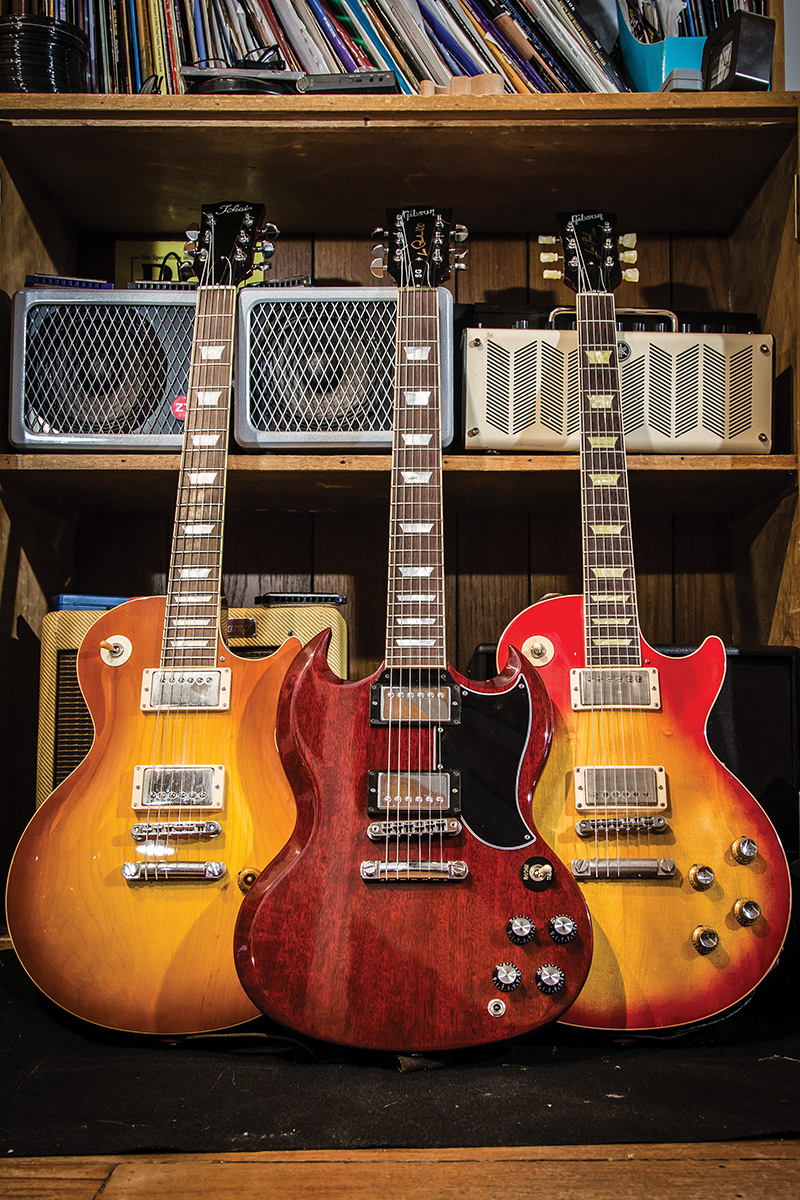 For teaching rock, Phil has a stable of humbucker-loaded guitars, including his 2015 SG Special and a Tokai Love Rock

Another Tele that Phil brings out to share with us is his most expensive, a Danny Gatton Custom Shop model. “When I bought it, it was the most expensive Custom Shop Tele that Fender made, and I waited six frustrating months for it to arrive!” Phil recalls. “The Bill Lawrence pickups are pretty hot, but while they are also noise free, I feel they dampen a little natural Tele twang and sparkle. Gatton also asked for cubic zirconium side dots, which supposedly reflect the light so they can be seen easier on stage.”

The most battered T-type he brings out for us is actually a faithful Chinese-made replica he picked up recently. “I’ve been after a Jeff Beck Esquire Tele for a long time, but have yet to find one with a price tag that suits my wallet,” Phil says. “I saw this at a guitar show and was impressed by the relic work, the playability and the sound. It’s not the real thing of course, but it’s a real joy to play and sounds really good.” 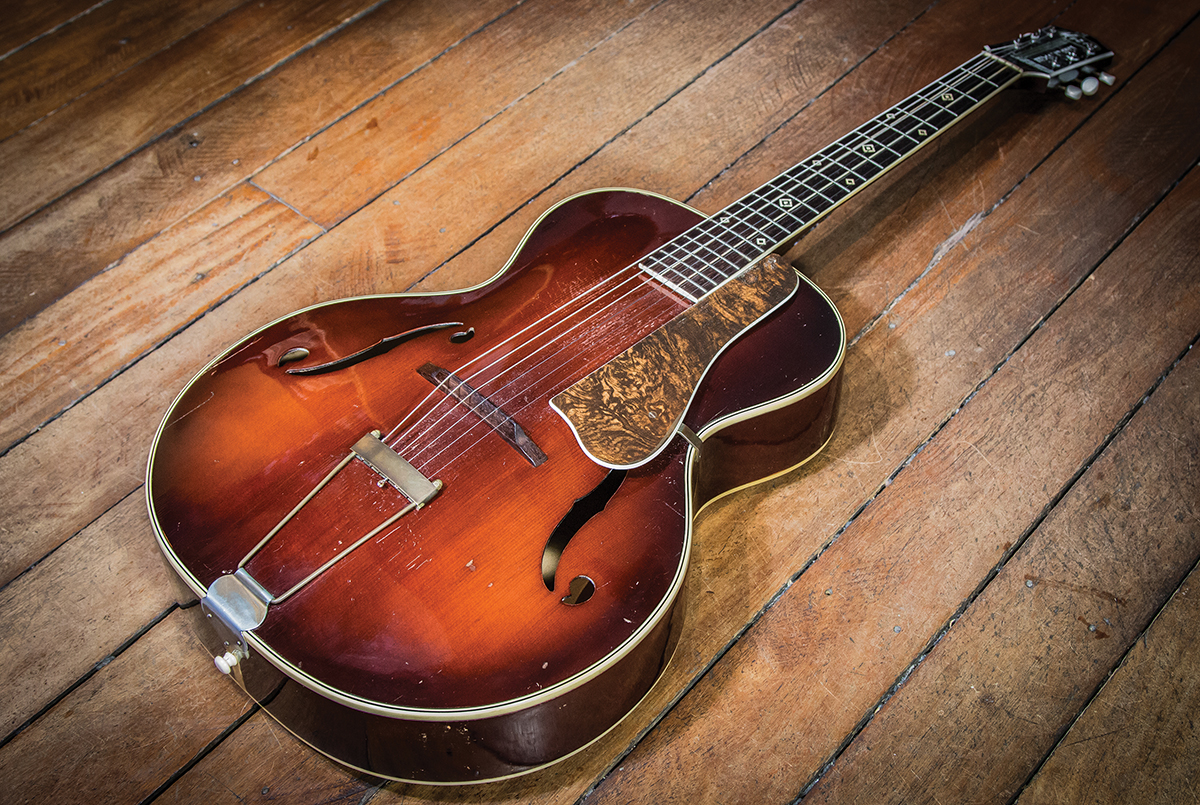 Phil’s Harmony Metro Deluxe is a bit of a mystery, but probably from the 1930s

To this day, Phil is still a passionate Buddy Holly fan and his collection reflects that fandom. “At the moment I have three Strats,” he observes. “I’ve owned my pink ’73 Strat for about 20 years, it’s what I call a keeper, with the best sound out of the three. I’d have to be in a desperate situation before I sold this one. I actually swapped it for a Parker NiteFly at a guitar show.

It has been refinished and loaded with a couple of Seymour Duncan pickups, this is a real player with a fixed bridge, which seems to be popular with collectors at the moment. I also have a Thin Skin model in Dakota Red from 2011. The lightweight body has a thin nitrocellulose finish instead of the more modern urethane or polyester finishes, this gives it a really cool 50s/60s vibe.”

Another of his Strats might have a famous connection – if you believe the rumours… “I was in a shop in the north of England looking for a Custom Shop Strat,” Phil remembers. “I picked up on a buzz that was going around that this 2003 Custom Shop Relic ’56 was once part of Peter Green’s collection. I don’t have any provenance, but it would be nice to think that it belonged to him. For playability and sound, this one is as good as it gets.” 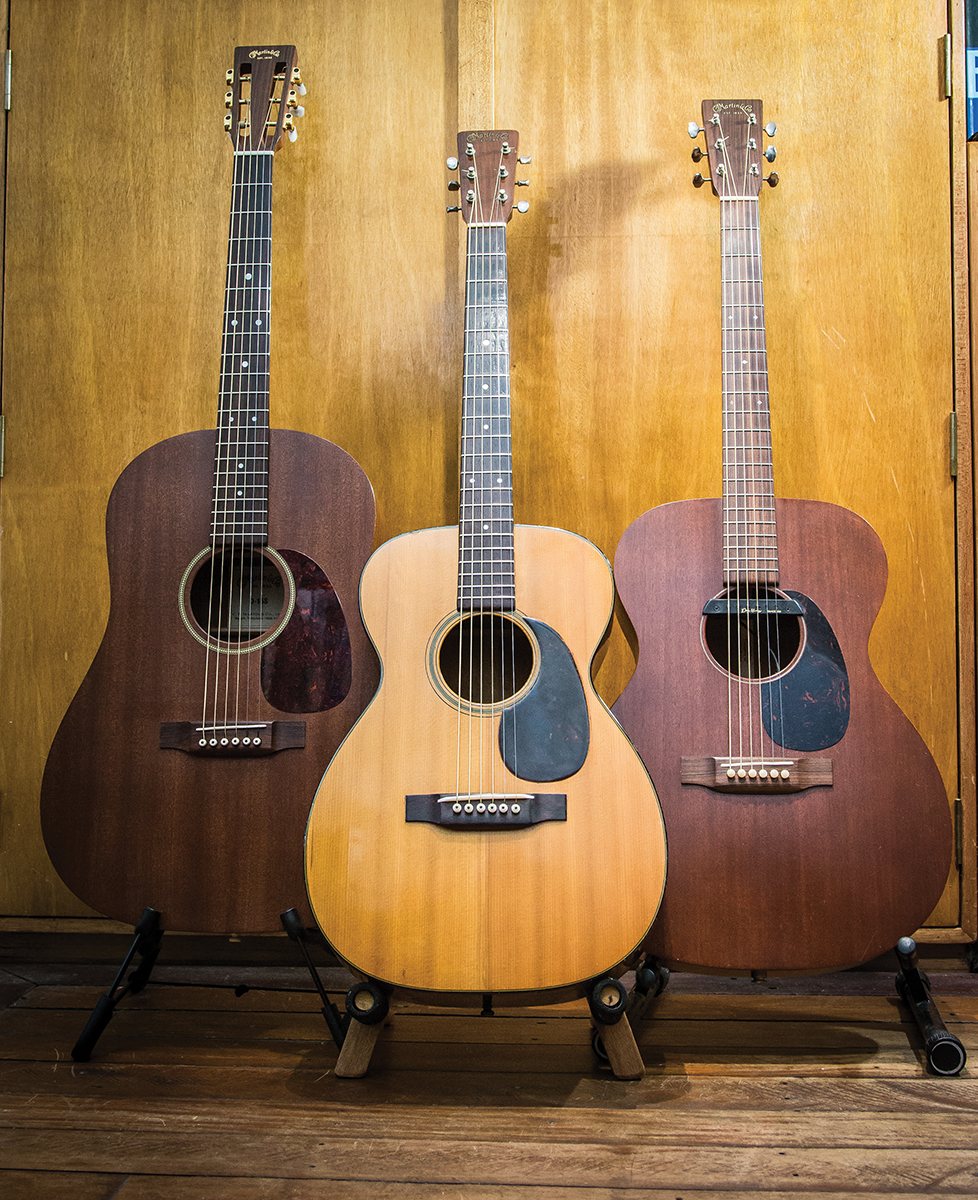 When playing live, Phil leans more toward the lighter side of acoustic blues and folk, and he uses guitars to suit this, while still owning higher-output guitars for teaching the heavier side of rock.

“I rarely use any of these live,” he explains. “But for teaching metal and rock guitar there is a need for humbucker-loaded guitars and my Gibson SG 2015 Special and Japanese Tokai Love Rock are perfect for the job. Floor effects help of course for overdrive in a small room and the small Yamaha THR5 and ZT Lunchbox combo, delivers a big sound in a confined space. They are great amps, also loud enough to gig with. 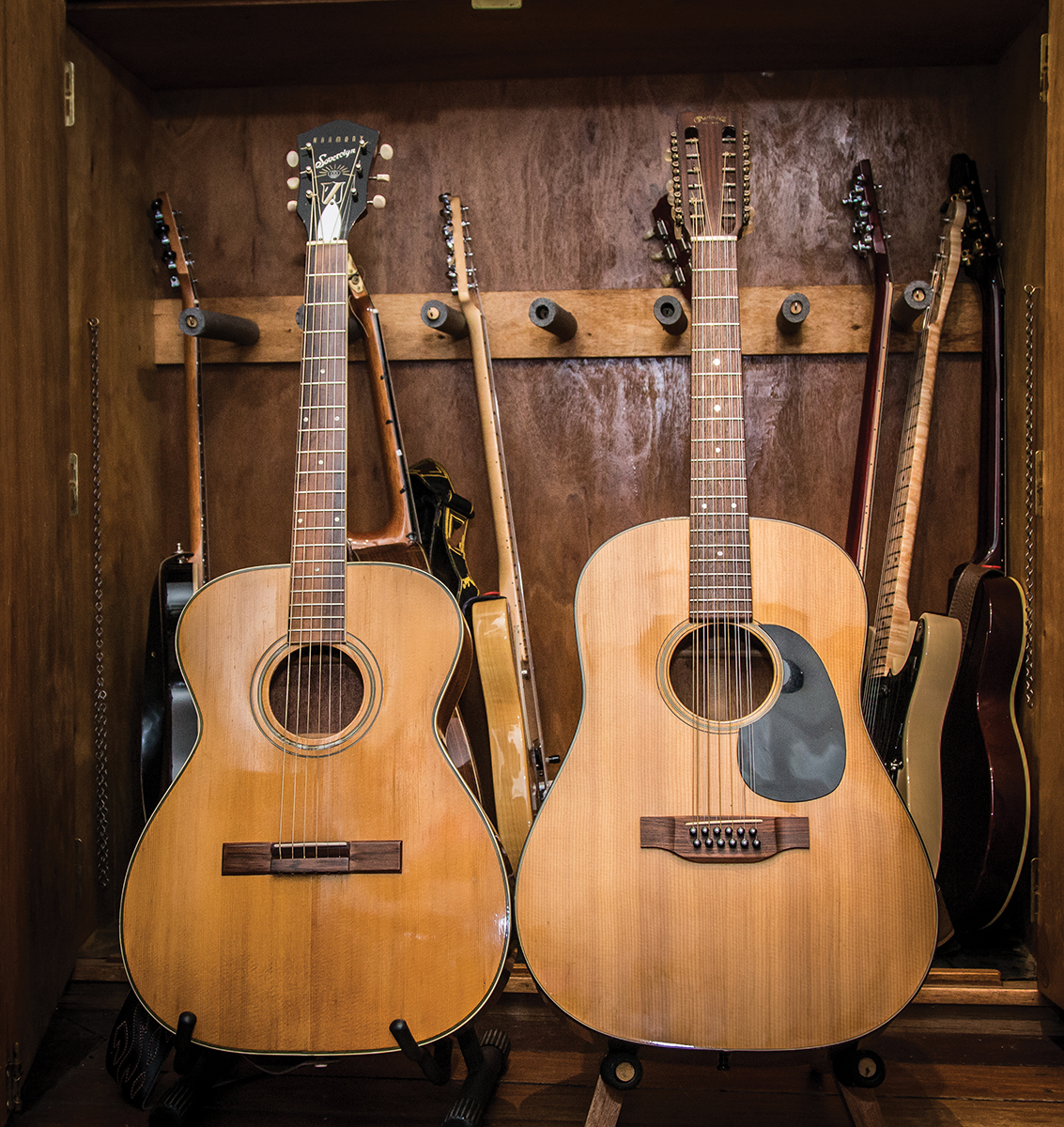 “The Tokai is really heavy though, but then again, Les Pauls were back in the day, the trend now is for ultra-light, chambered bodies. I have an ’06 Gibson 1960 Les Paul reissue, which is on the light side and in pristine condition. I actually swapped this one for a Gibson acoustic.”

Speaking of acoustics, Phil is putting together an intriguing collection. “It’s building quite nicely now,” he confirms. “In addition to the vintage Harmony models. I have a Dobro square-necked lap steel choice with the inverted tuners on the headstock and a wooden bodied National Estralita. I love the warmer mellow sound compared to metal bodied resonators – I had the latter with all the surfing characters on the back, but I found it far too metallic, this one is gorgeous. 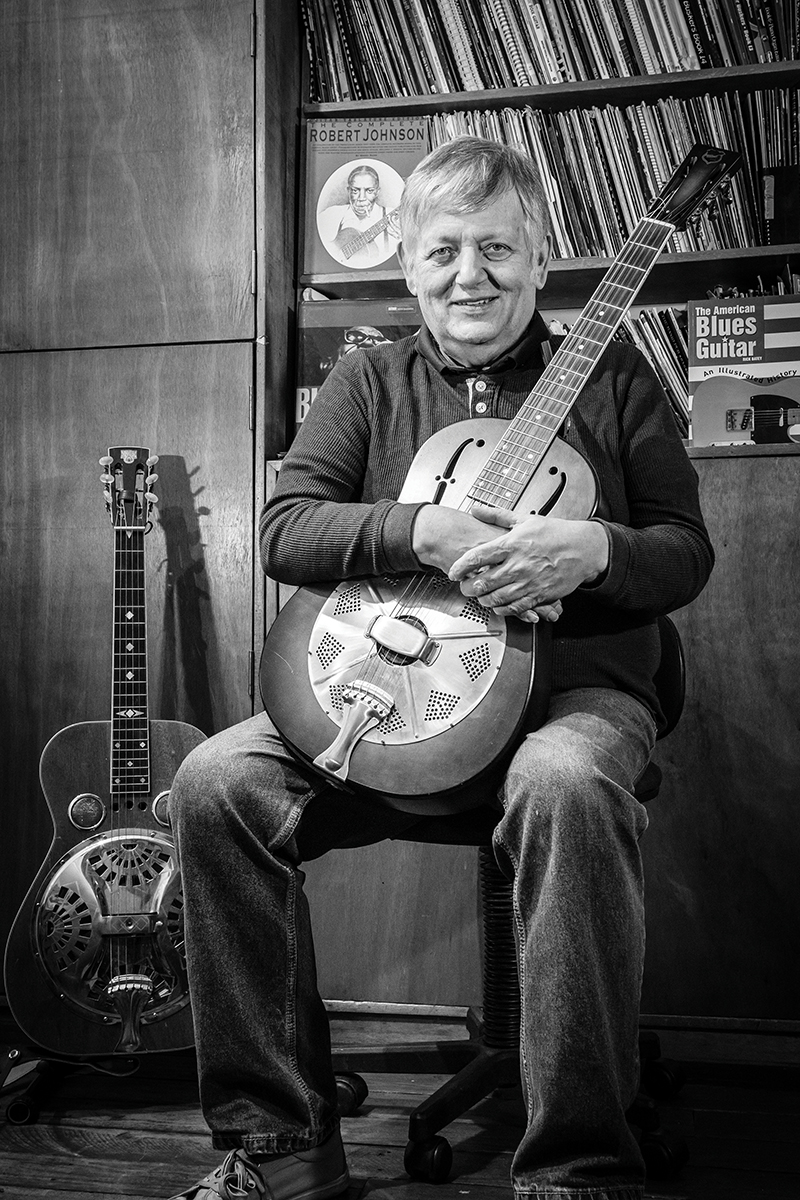 Phil with his National Estralita resonator, with his Dobro lap steel on the floor

“I also have three Martins that cover most popular styles of acoustic playing. My 70s Martin D-12/20 and D-15S – with their dreadnought bodies and 12th fret neck to body join – are perfect for big strummy chords, while the 000-15M also has a warm and balanced tone and is my number one guitar for teaching. The star of the show though is my 0-18 dating from 1950. I bought this little beauty with my superannuation money, I thought what the heck, I worked hard for so long, I’ll treat myself. I call this one my heirloom guitar.”

Looking back on a life in guitars, Phil has found that his focus on playing in his day job has made the process of collecting all the more rewarding. “When your hobby becomes your work, you then need a hobby”, he reflects. “And my hobby is collecting guitars. It was always my intention to profit from music and I feel I’ve achieved that goal, but I’m not going to stop!”