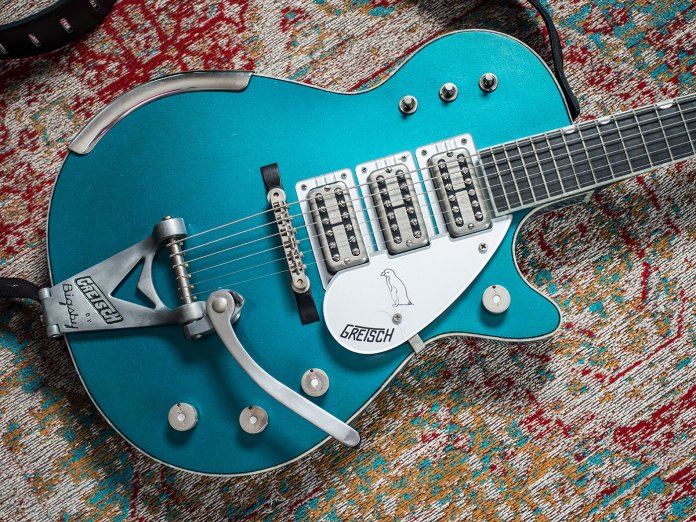 Continuing with our tour of Scott Holiday’s insane collection of axes, we turn our attention to a guitar that might just be our pick of the whole bunch. What’s cooler than a Gretsch Penguin? How about one with three pickups, in blue?

“Stephen Stern became one of my favourite luthiers and somebody I paid attention to,” Scott reveals when we ask how the guitar came about. “On [2011 album] Pressure & Time, I used Dave Cobb’s Custom Shop White Penguin pretty frequently – it had a lot to do with the sound of that record. And also on Head Down [2012] I used that guitar a lot. We couldn’t say enough nice things about it; we just loved the shit out of that guitar. It just felt like a real ’59 Penguin… it sounded, felt and looked real. This thing was like the real deal!

“So I fell in love with Stephen’s work and Gretsch particularly. That was probably when I fell in love with that Gretsch aesthetic as well. I always had it in the back of my head that I would do something with Stephen. Then recently Fred Gretsch wrote me, and we were talking about all the Bigsbys that I have on all my guitars and our relationship, and he was really gracious over there and asked me if I wanted to do something with them. And I said no, I’ve got it covered, thank you but I have all the Bigsbys I need. And then I thought, wait a minute! I need to hook up with Stephen… 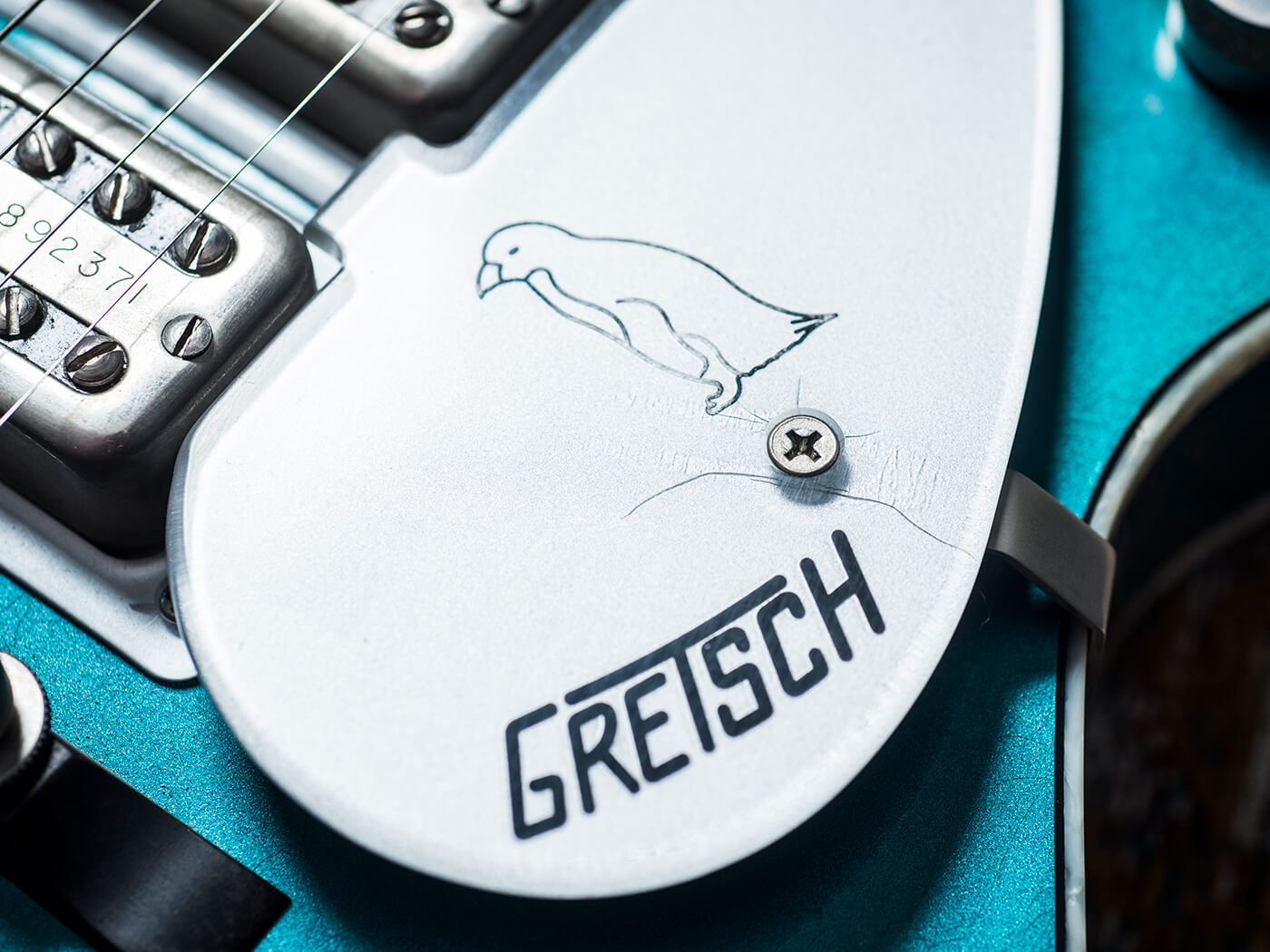 “So I wrote Fred back and said ‘I want to work with Gretsch, I want to do something, I don’t know what I was thinking! I do want something!’ And I joked with them and said I’d had this guitar in my photos that I’ve carried around in my phone for years – you guys made this Blue Penguin guitar and I literally told myself, I’m getting this one day, I need to find it. Well, they only made one of ’em ever, and I decided I wanted to see if I could get Stephen to build me that.

“They were super-stoked to have me work with them. Me and Stephen hooked up and became friends and I went up to Corona in California here and met with him, talked guitars and got nerdy. He wanted to do it, it got approved and we did that guitar together. So there’s now two of them in existence and mine probably sounds better because it has the pickups I like in it! Other than the TV Jones Power’Tron pickups that I love, I didn’t really change anything. They were trying to get me to do a signature on the ’guard – I hate that shit! I don’t put my name on it. I play it. It’s a Gretsch, Stephen you put your name on it, then I’m good!

“So it basically looks like a 1959 Blue Penguin and if it was from that era, it would be worth a million dollars. This one isn’t – but it plays like it! It’s really unbelievable. This is the other guitar that I used on the new album the most. My two best friends were this Gretsch and the Kauer Super Chief. They sound entirely different, but based on that Gretsch being chambered and the pickups, the way those Gretsches play, they’re really airy and open-sounding.

“With the Power’Tron Plus and Power’Trons in there, they get really robust and strong. So you get this juxtaposition that works beautifully and really has become a bedrock of my tone. That’s one of the Rival Sons guitar sounds that I think is quintessential: these Filter’Tron pickups, with a little bit of gain it has an airier, earthier kind of woody sound that’s still real big. It fills up a lot of space, and as the only guitar player, that’s important.”

Scott Holiday’s enthusiasm for all things guitar is thoroughly infectious. Before we wrap up, the conversation turns to yet another custom instrument that’s on the drawing board – we wonder if he’ll ever run out of ideas for new builds and collaborations. “How can I have so many fucking guitars and still be excited to do this?”, he laughs. “I feel like I’m like the Grinch of guitar players, or like the greediest… the Scrooge McDuck of guitarists! I have a doubleneck coming and I’m still trying to build another guitar. I’m the king of GAS, man!” Long may he reign.