“After years of building electric replicas, I felt I had to do something that’s mine”: Dave Dearnaley on his acoustics

We catch up with Cardiff-based luthier to find out more about his voyage into the acoustic world. 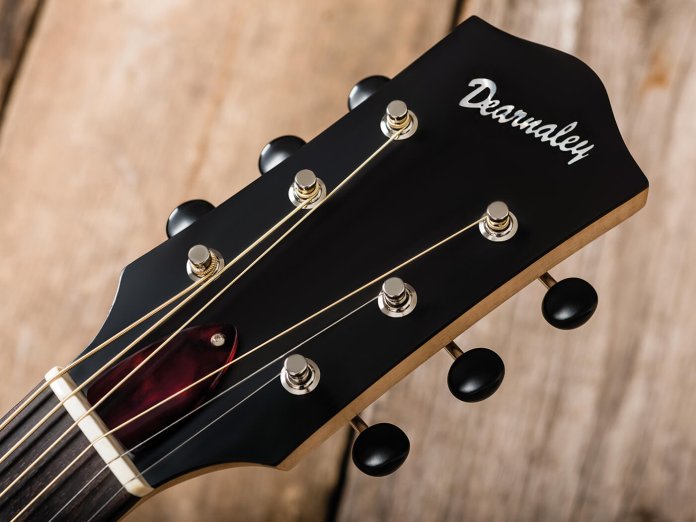 What made you switch to building acoustic guitars?

“It was probably because I’d spent so long building electrics, but it was always the plan. I bought a load of timber sets many years ago, not that I had any use for it at the time – and I just put them into storage until five years ago, when I built the first one.

“I was almost shamed into it by a customer who built a couple of acoustic kits. I’d given him advice and he knew about my timber stash. He’s an engineer and as a thank you, he made me a side-bending jig.

“That was the beginning, although I did make an acoustic when I first started doing repairs around 1978. I bent the sides in the bath and built it on the kitchen table. I used it for years, but young children and damp farmhouses eventually did for it. I still have the carcass in my workshop.”

Your acoustic designs are very much your own…

“After years of building electric replicas, I felt I had to do something that’s mine. The shape came from a ladder-braced German clunker that I’d had since the 80s. It wasn’t worth restoring, but I always found its shape particularly appealing.

“I do like the spookiness of ladder bracing, but it’s too limiting, so I decided to formulate an X-brace design to fit that shape. After building four, the next thing was to adapt the design for a 14th-fret neck join. I drew a new layout and, by happy accident, the numbers just fell right. The bridge is exactly halfway between the end block and the lateral brace, so it’s slap in the middle of the vibrational plate.”

Which other builders inspire you?

“Somebody turned me onto Ervin Somogyi and I read his book. There’s a lot of science and rigour in it and it pointed out some things that I’d not previously considered that are important. A lot of Somogyi’s ideas reinforced what I felt instinctively, but I don’t hold with the ‘guitars as art’ thing.

“Then I started looking at some of the British makers, in particular Stefan Sobell, because I’ve always been a fan and I own one of his guitars. His approach is completely different to Somogyi’s and I found myself wondering who’s right? I suppose I’ve ended up using elements of both, but all of my stuff is a work in progress.” 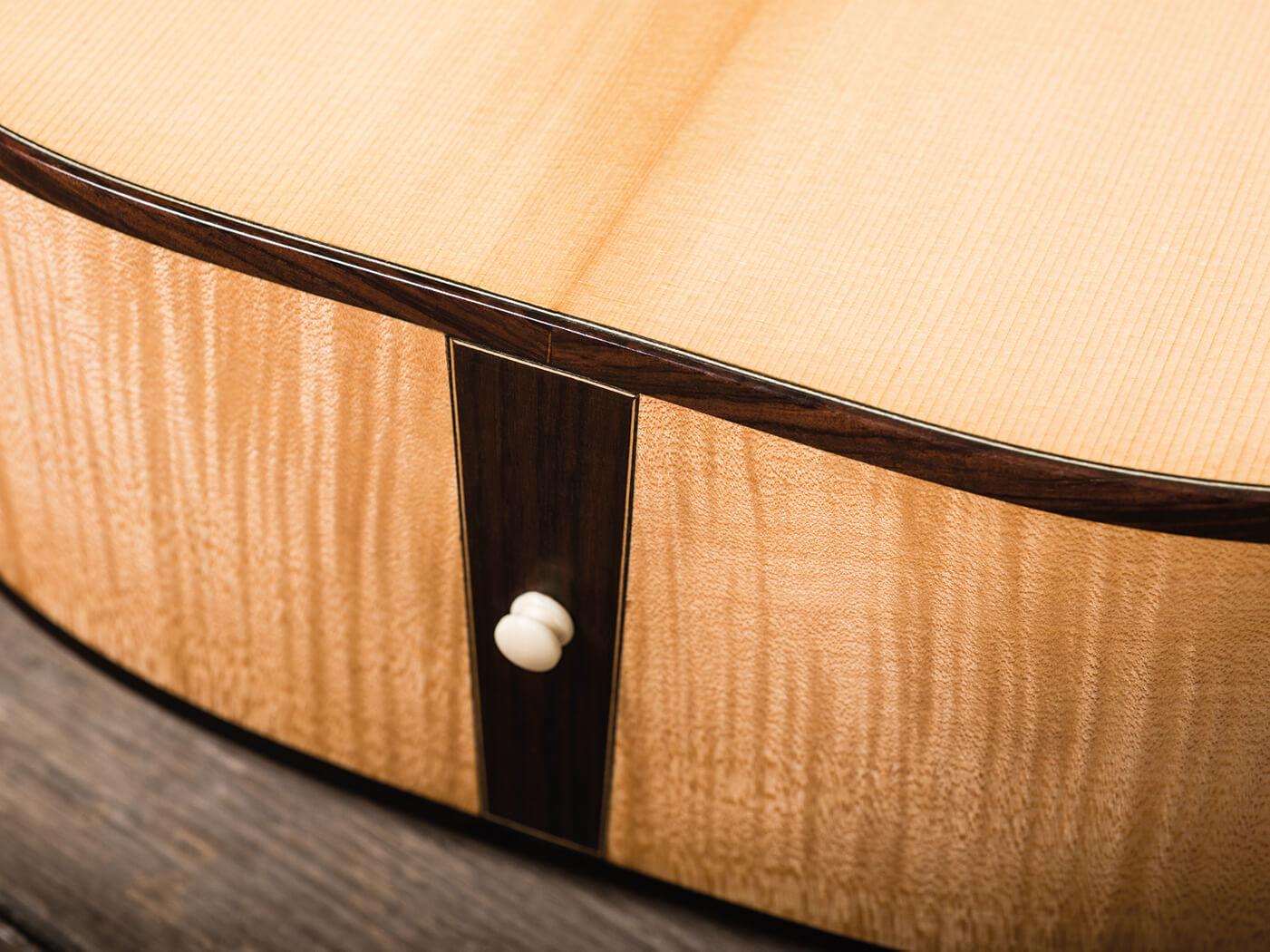 How are the guitars constructed?

“My tops and backs are cylinder built, on a 20-foot radius. With top thicknesses, I don’t work to a number, because every piece of wood is different. It’s more about feeling it than listening to it. Spruce cut on the quarter is pretty floppy, laterally, so it will almost sag into a cylinder. I fit the braces to that curve, so although the tops look stressed, I’m building them with as little stress as possible.

“The sides are sanded using the cylinder to meet the curvature of the tops, so everything fits together like an Airfix kit. Once I’ve established the lowest points, I rock the rims lengthways as I’m sanding to introduce little angles at the front and back. So, it’s almost like a dish build, but with the emphasis on the lateral rather than the longitudinal.

“The spruce I’m using for the braces is ancient and it was salvaged from the rafters of Oriel College in Oxford. It’s about 300 years old and it’s extremely light, but really stiff. Most of the timber I’m using for the bodies I’ve had since 1974, so it’s very stable.” 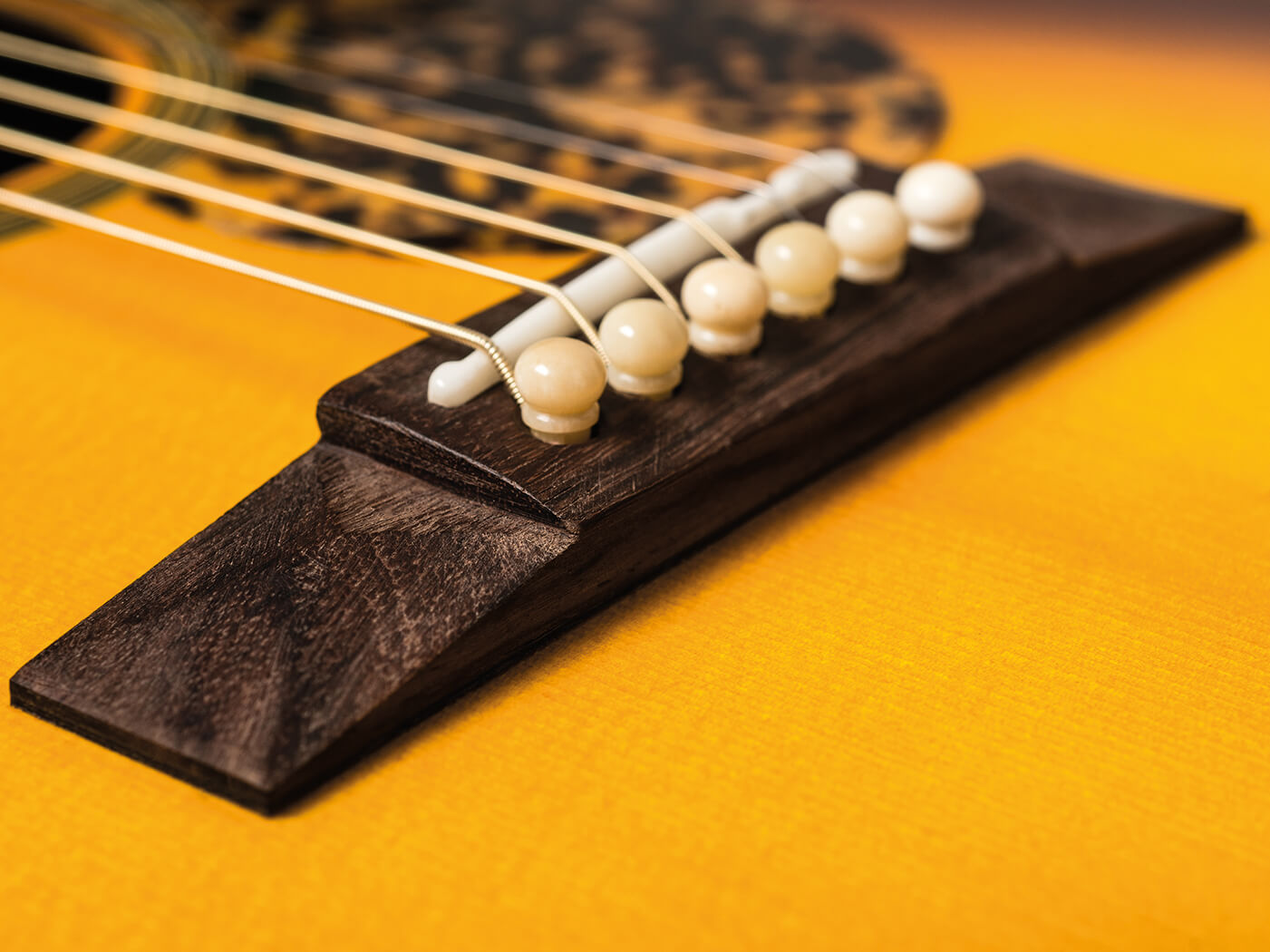 What’s the thinking behind your bridge design?

“It’s structural engineering, really. You can compare its function to a roof truss or I-beam. I like pyramid bridges, but then I gleaned from Somogyi that the ends, beyond the scoops each side of the centre section, tend to flap about as the top is vibrating.

“Sobell considers the bridge the most important brace, but I’m not so keen on his spatula design. My bridge is intended to work like a spatula bridge, but have a more traditional look. It’s all about losing mass but keeping rigidity.”

You’re not into decorative flourishes, but there are no compromises on the build…

“If you’re going to make a guitar by hand, why would you employ cost-cutting measures? The steel-string guitar was designed for mass production, but since the late 60s, people have got into hand-building what is essentially a factory instrument. Why would I stack the heel or scarf the headstock to save timber? If I’m asking a premium price, I want to be making a premium product.”