John Beattie is a rugby union institution, but while the former Scotland and Lions back rower may be a celebrated player and broadcaster, his undoubted passion is guitars. We find out how the BBC presenter found the sound that he’d first started looking for 40 years ago… 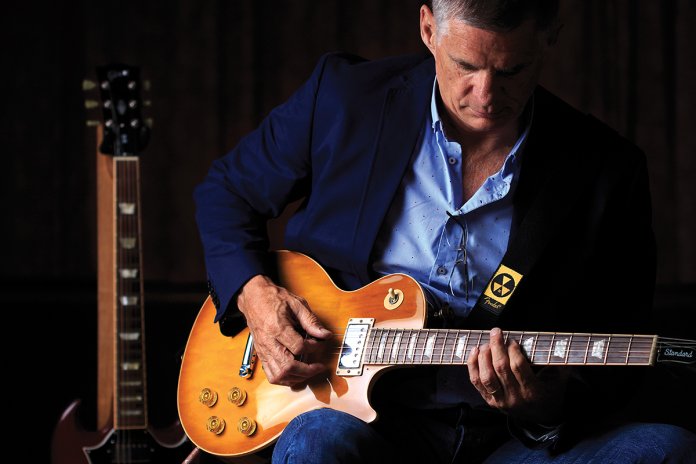 For viewers and fans, this year’s Commonwealth Games in Australia was a spectacular celebration of sand, sea and sporting excellence with an Antipodean twist. For three weeks, passion and endeavour were the maxims to follow from down under. For John Beattie, however, while covering the games for the BBC was a pleasure and a privilege, it also meant he was away from his beloved guitars… and that just wouldn’t do.

“I was there for three weeks, so I just had to buy a guitar,” concedes the 60-year-old former Scotland flanker, who now works as a commentator and presenter for the BBC. “I phoned up lots of places and asked about renting one, but was quoted £20 a day. Instead, I bought a Chinese Les Paul copy called a Haze from a pawn shop. It had active pickups and I played it every day for an hour in my room overlooking the Gold Coast beach. I also bought a wee battery-powered Orange practice amp to go with it, and it was magical.”

Despite being best known for his rugby career – which included 25 caps for his country and tours with the British & Irish Lions to both South Africa and New Zealand – and his TV and radio work, away from the pitch Beattie’s first love is the guitar.

“Everybody thinks because you’re a rugby player; you’re a numpty, but we were a musical family,” he explains. “Music was number one in our house. Unlike rugby, music isn’t competitive, or at least it shouldn’t be. But like rugby, it is teamwork. You’re in a team of people trying to make something lovely.”

Beattie shares his passion for guitars with his brothers. Family get-togethers often end up in sibling jams supported by backing tracks polished off with three-piece harmonies. He also takes his obsession to the stage with John Beattie’s Ruckstars – a band that gigs every couple of weeks with an ever-changing line-up of seasoned musicians and TV celebrities.

In fact, Beattie cut his stage teeth in the mid-1980s with Nobby Clark, the original lead singer and founder member of the Bay City Rollers. But it wasn’t until after the year 2000 that he approached Jackie Bird, the Scottish journalist and newsreader, about singing in a band that would feature Wet Wet Wet’s drummer Tommy Cunningham and James MacPherson of Taggart fame. “We played the West End Festival in Glasgow and that gave me the bug.”

His fervour for guitars came to a head recently, when he used social media to offer his services to local Glaswegian bands. It proved to be a pivotal tweet. “I was home alone for the weekend so I put something out on Facebook and Twitter asking if any band wanted a guitarist for the evening. The Dead Flowers, who play at The Cave in Paisley, got in touch. The guys were very generous and the guitarist had a huge Gibson Les Paul in Honeyburst. I played it and it just felt right. I thought; I’m getting one of these.”

And so he did. “I’ve always fancied a Les Paul,” he explains. “I grew up with the sound of Jimmy Page and Paul Kossoff, but it seemed to be the guitar everyone else had. And yet, I knew that it could do things other guitars just couldn’t do.”

After his drop-in gig with The Dead Flowers, Beattie contacted a friend who runs an instrument hire company and ordered up five Les Pauls to test out. “One of the guitars had hardly been used because it was so heavy,” he says. “I weighed it on the bathroom scales and it came in at 11.5lbs. It had strap locks and locking tuners, and I thought it was wonderful. I restrung it with 0.010-gauge strings and stuck it through my amplifier and it sounded magic. I took it to the Thornhill Music Festival and liked it because it didn’t swing around too much because of the weight. It had a lovely playable fat neck and a weird, cleanish, humbuckery sustain that I loved.” 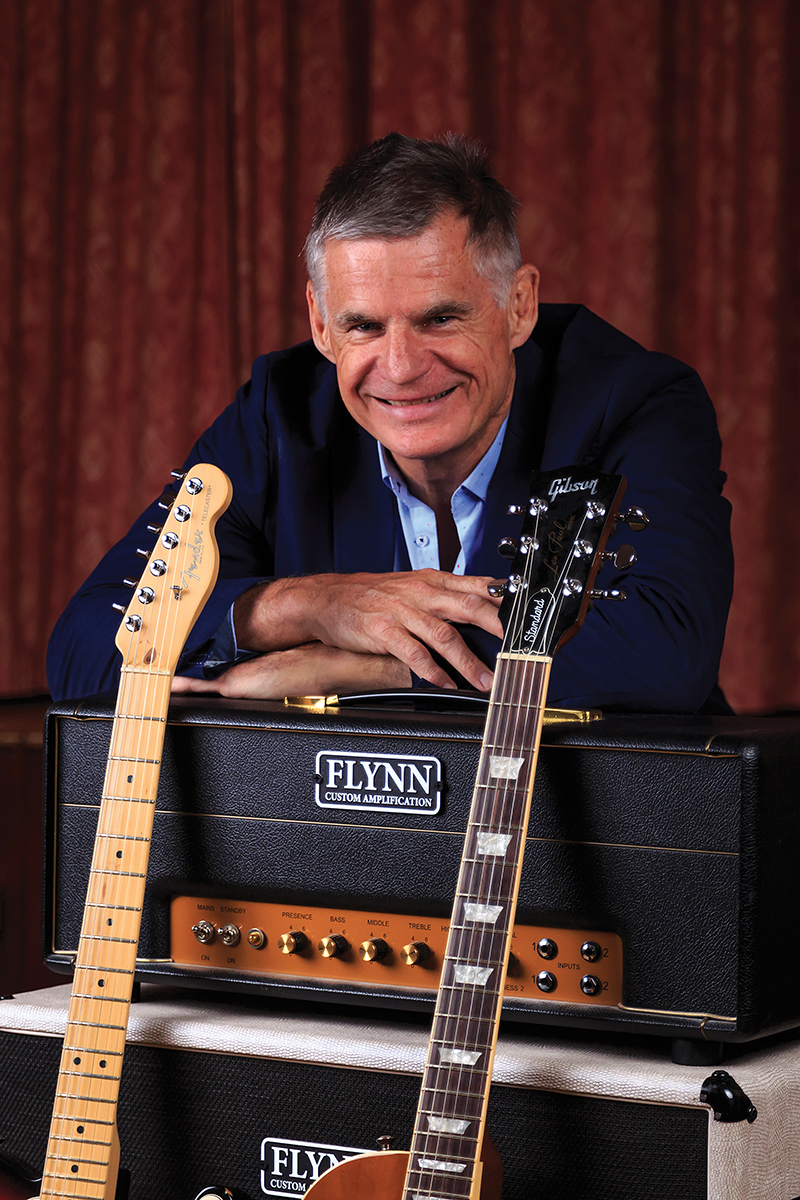 The hefty 1998 Les Paul Standard was duly acquired and became the latest addition to Beattie’s considered collection earlier this year. Losing himself in its tones transports him far away from the commentator’s box at Murrayfield or the BBC studios in Glasgow, where he presents his daily radio show discussing the contentious topics of the day.

“The Les Paul felt like a guitar that could do some work,” he enthuses. “And it plays and sounds exactly the way a Les Paul should. You can hear every classic rock album you’ve ever heard when you play it. That’s how they got that sound. That’s where that noise comes from. I know it sounds silly coming from an ex-rugby player, but the guitar spoke to me.”

The reassuring warmth of a Les Paul is brought to life when Beattie plugs it into his Flynn Brit Plexi 45 – a JTM 45 clone that is paired with a 2×12 cabinet. This ballsy, straight-ahead amp also hails from Glasgow and the workshop of Stevie Flynn, who has established Scotland’s biggest vintage valve amp service and repair centre. Happily enough, he also builds hand-wired boutique amplifiers that accentuate the clarity of Beattie’s Les Paul, and stresses the pick attack that is a big part of his playing. 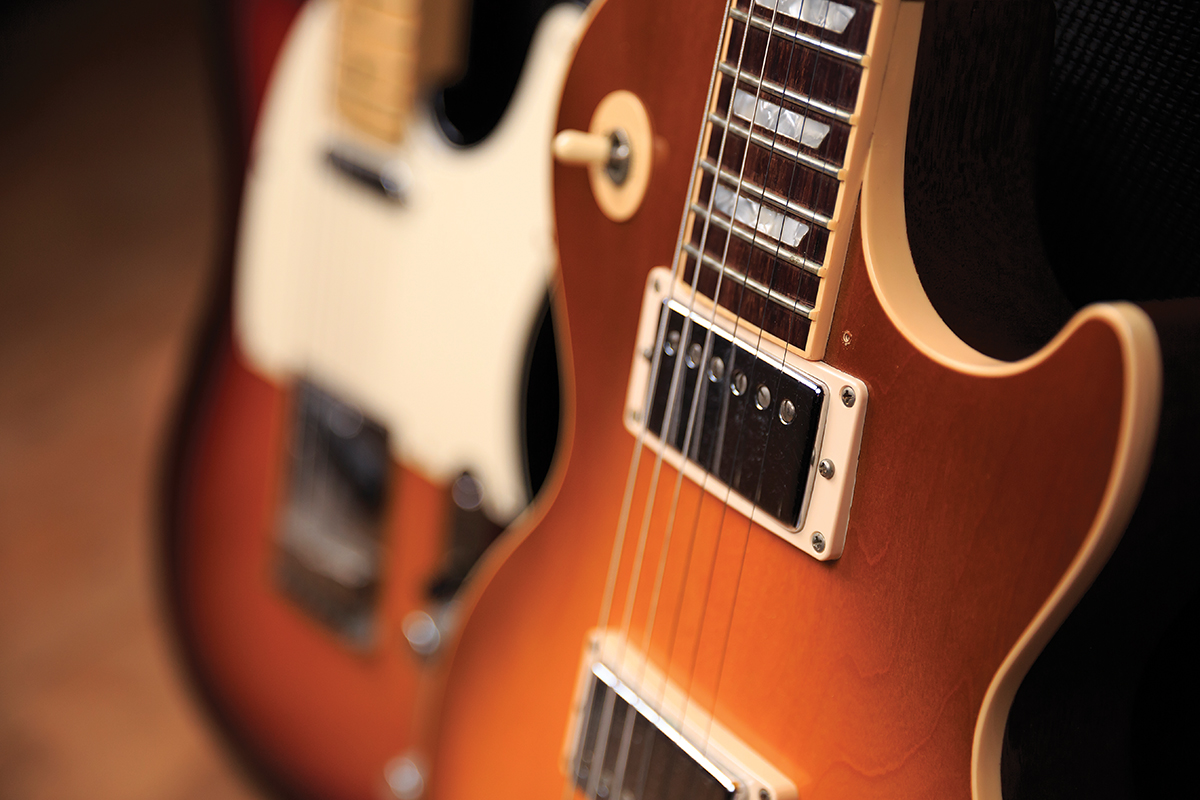 “Stevie Flynn is a great amp maker,” says Beattie. “I didn’t want to buy a Fender or a Marshall or a Mesa/Boogie. I wanted to find a local amp builder and help a local guy. When Stevie plugged his beautiful Les Paul Goldtop with mini-humbuckers into the amp – it was that sound. That AC/DC sound, or you could tweak it and it could be Paul Kossoff or Peter Green or Eric Clapton from the Bluesbreakers.”

Beattie had found his sound and completed a journey that had started more than 40 years earlier with an Ibanez Les Paul copy, and ended in a throwaway tweet when he was at a loose end one evening. The initial musical stimulus to pick up that old Ibanez came in the form of The Seekers, Status Quo and The Who. And while rugby, civil engineering and chartered accountancy offered career progression in various areas – rugby union was still an amateur sport until 1995 – Beattie was always playing his guitar, with one man influencing him more than any other. 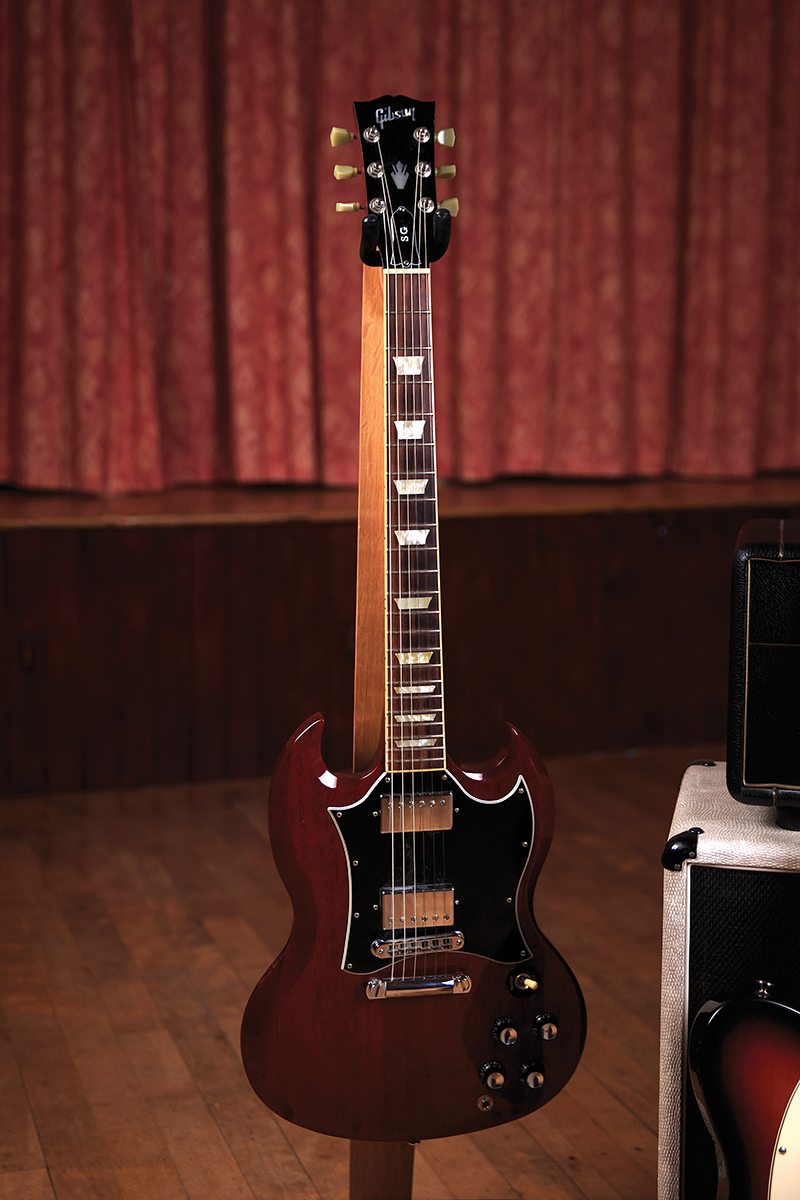 “The one person I would love to interview and hang out with would be Angus Young,” he says plainly. “I think of all the riffs he and his brother wrote, the way they got two guitars chopping in and out and how the two guitars sound different but blend so well together. There are other guitarists who are faster, like Joe Bonamassa, or more influential, like Jimi Hendrix, but in terms of the sound that I would aspire to; it would be Angus Young.”
Young was also pivotal in forming Beattie’s set-up and, in particular, his approach to pedals. “I don’t use any effects,” he affirms. “I used to, but I don’t any more. There’s something about the guitar straight into the amp that I am very happy with.

“If you’re in your bedroom and you’re playing with loads of effects, you can hear them all. If you’re playing in a band, there’s no depth to your sound because there are so many effects. It’s the Angus Young thing. I know he went through a Schaffer system, but why complicate things? Why worry about it when the beauty is plugging the guitar into the amp and using your volume and tone pots.”

He does have one tip to add a bit of colour to your tone. “Sometimes I angle my amp and reflect it off the ceiling or I’ll turn it away from myself to get the sound off the back wall,” he explains. “Sometimes I will deliberately not point the amp forward, but sideways or up to get a wee bit of reverb and delay. It depends on the room.” 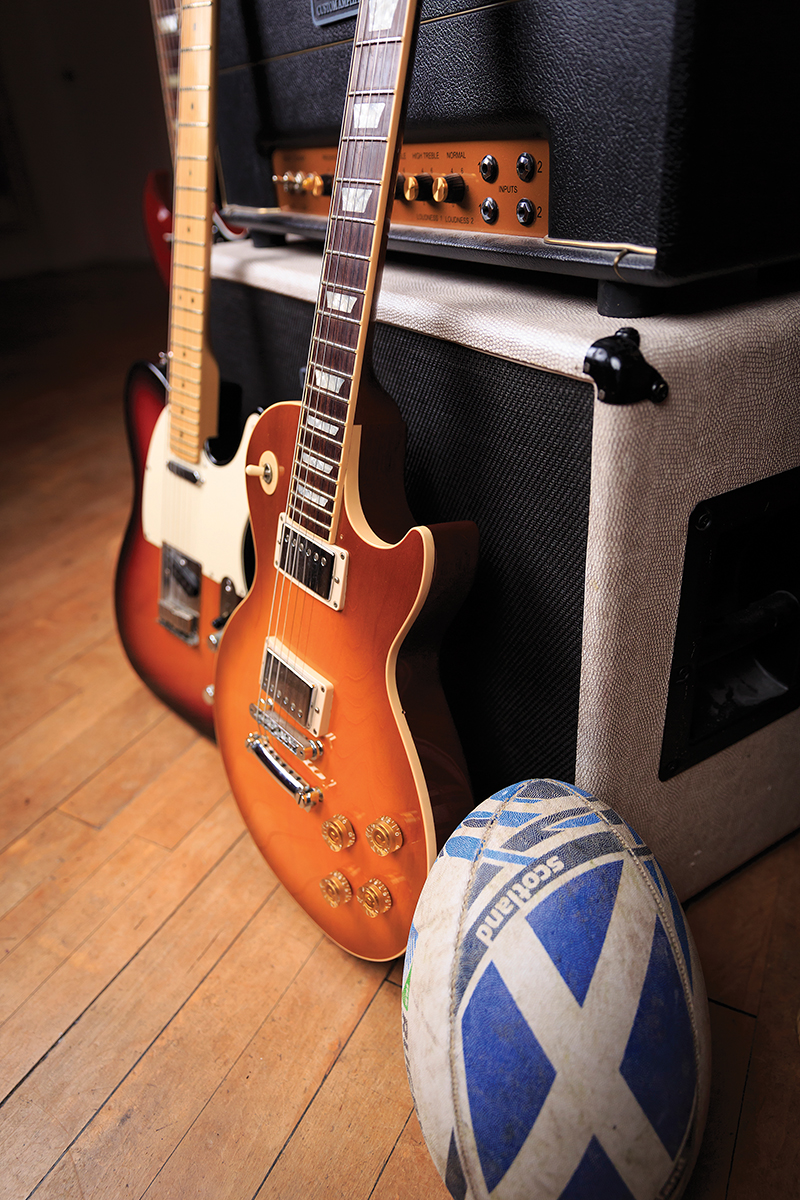 While the Les Paul has become John’s go-to instrument in recent months, the rest of his carefully considered guitar collection has plenty to offer as well. As an Angus Young disciple, it’s no surprise that the first guitar he pulls out is a Gibson SG, but it’s one with a bit of a story behind it.

“That goes back to when I shared a flat with two ex-marines in Edinburgh when I played rugby for Scotland and would secretly learn every AC/DC song I could,” Beattie recalls. “I wanted an SG because I wanted that sound. Of all the gigs I’ve done, I’ve used the SG the most. I’ve had it the longest and it can sound beautiful. It occupies that space above the bass and below the voice.

“The only disconcerting thing is it can feel light. I know that Angus Young is so tiny, the SG looks big on him, but with me – I’m six foot four and 15 stone – the SG feels little. But that’s probably me, rather than the guitar!” While the SG was his weapon of choice for many years, everyone needs a bit of variety in their collection, and for John, his Telecaster provides the non-Gibson sounds.

“It’s a guitar that can do more than any other,” he explains. “And it’s tough. It can sound like Francis Rossi, Brad Paisley, Keith Urban, Jimmy Page… but it won’t sound like Paul Kossoff! So it’s limited to its niche… but it’s a wonderful niche! Of all the guitars, the Tele is the easiest rhythm guitar. It’s crisp because of the single coils and it feels tight with good string tension so you can play rhythm right up the neck. You can’t play rhythm up the neck on the SG the way you can with a Telecaster.”

The most unique guitar in his collection is another workhorse – a single-cut WWR Custom Guitars one-off made for John by Motherwell luthier, Wilson Reid.

“I’d played a couple of his guitars and liked them,” John recalls. “So I explained I wanted a guitar made of a big slab of mahogany, a fat neck, one P-90 and a wraparound bridge to keep it as simple as possible. Not many people play with just one pickup and I thought; ‘I’d like to do that – I like to be different’.

“He made it and I loved it. He did a great job – I wanted it sanded and oiled like you would with a kitchen worktop. I wanted it to be rough, so if you were ever in a fight, you could pick it up and whack someone with it! I wanted it to be completely bomb-proof.” 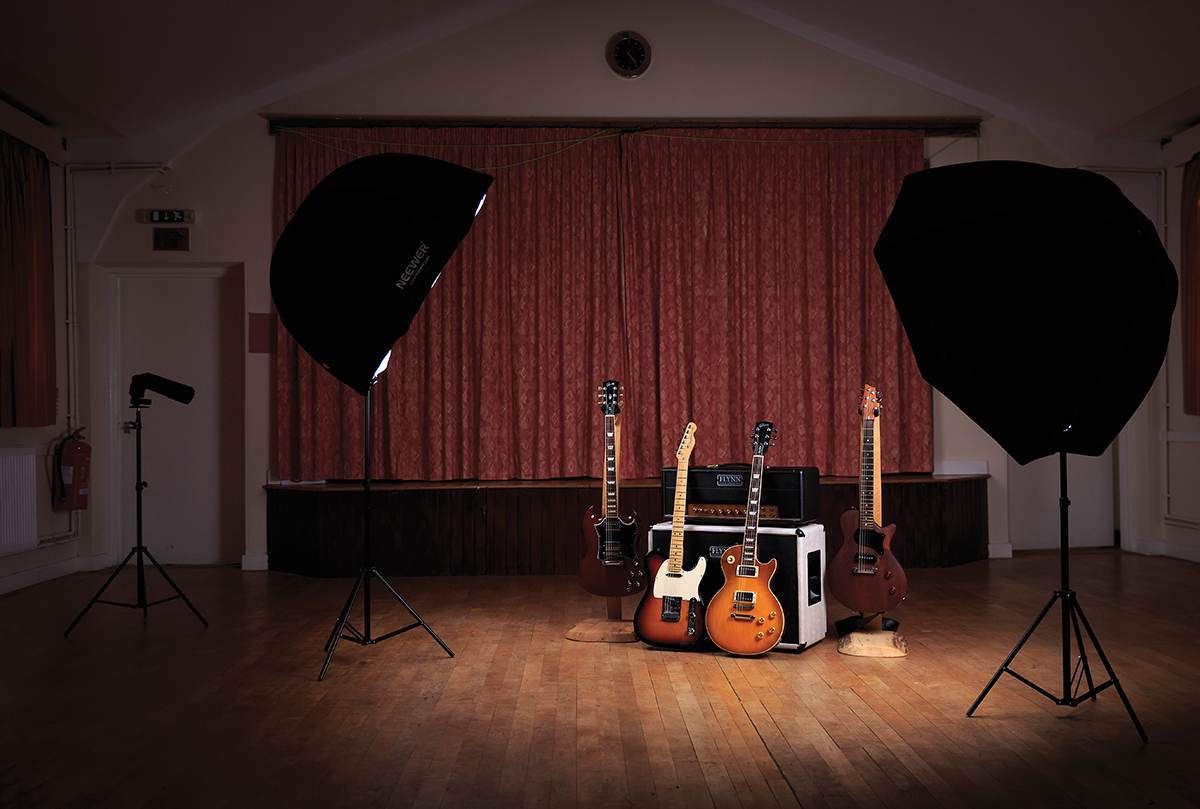 Clearly, Beattie is a no-nonsense rock ’n’ roller, and while his reputation for strength and toughness on the pitch might tie in nicely with this musical persona, in reality the North Borneo-born Scotsman is a team player who likes nothing more than getting up on stage and making an audience dance.

“I’ve lived a charmed life. I’ve played rugby at a level I never thought I would. It’s given me more fame and more glory than playing the guitar,” he says. “But if you can get 500 people dancing; that’s as good a feeling. It’s fulfilling because people know you’re a rugby player and you can smash into people and you were born in the jungle. A tough boy. But when they see you on stage, playing guitar and it’s not nonsense coming out of my fingers; that’s nice.”

Thanks to All Things Wood for supplying us with the guitar stands used in this feature.