The world of nylon-string guitars doesn’t have to be intimidating.

Earlier this month, Cordoba introduced its first electro-acoustic nylon-string, the Stage. It draws on the brand’s rich history of making traditional nylon-string guitars, as well as instruments that aim to bridge the gap for steel-string players. But what makes the Cordoba Stage special? And why might you want to use a hybrid in the first place?

Multi-functional guitars are having a little bit of a moment. The most obvious example is Fender’s Acoustasonic range, aiming to make a steel string sound and feel much more accessible to electric guitarists. and Modern guitarists are always looking for new ways to expand their sonic palettes, and luckily modern pickup technology and construction methods have both made doing so much easier, all within a single guitar.

In making a hybrid instrument, there’s always the risk of it becoming a ‘jack of all trades, master of none’. But given Cordoba’s reputation for top-of-the-line nylon-string guitars, it wasn’t exactly going to stake its name on something that sounds anything less than excellent.

Both the Stage’s build and electrics work to make it sound like an authentic nylon-string guitars. First, the build: the body is made of fully-chambered mahogany, meaning the spruce top can vibrate freely for a full, clear unamplified sound, and for optimal sound transfer into the under-saddle pickup and the internal sensors. 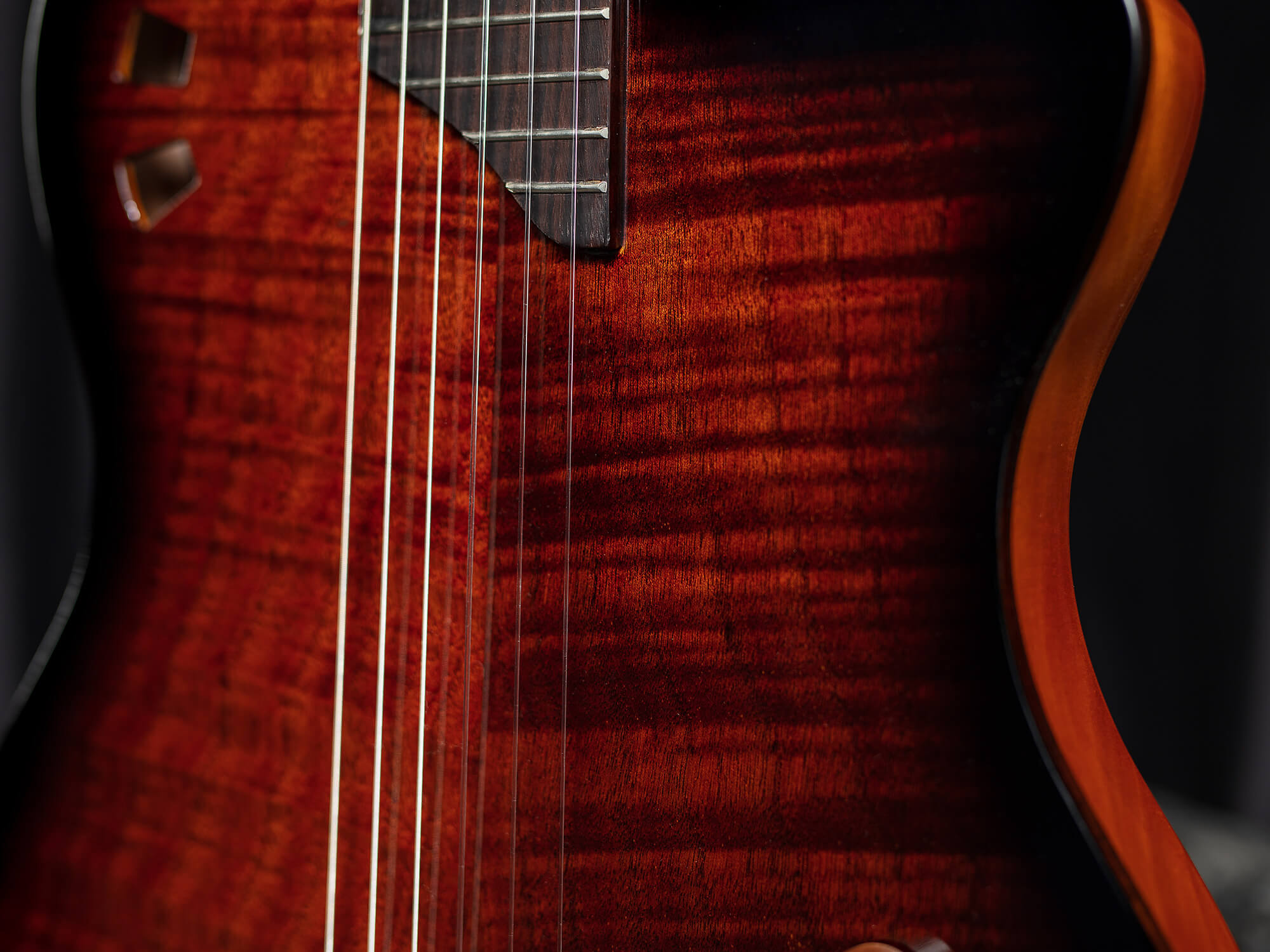 And the under-saddle pickup is no ordinary unit. The entire electronics loadout is the result of Cordoba partnering with Fishman to develop an all-new system, one that outputs the best possible amplified sound from the guitar. An under-saddle transducer is paired with an internal dual-body sensor microphone setup for a healthy balance of clarity and airiness: the under-saddle piezo transducer provides the clarity and attack, while the body sensor system offsets that with a more natural sound. If you need more airiness, or a dryer tone, the balance between the body sensor and the undersaddle pickup is adjusted easily with an onboard blend knob.

The finely-tuned electrics and the solid construction also work to eliminate on-stage feedback. Depending on your amplification situation, if you’re holding a very resonant classical guitar that’s plugged into a PA or a monitor, it’s a recipe for howling feedback. This can often be dialled back by the sound-person, but this most likely will involve scooping a big chunk out of your sound around the resonant frequency of your instrument. With a guitar that’s already designed to eliminate feedback, it means every part of its natural sound will come across to the audience.

And so the Stage’s build and electronics work holistically together to create an easily-controllable and great-sounding nylon-string guitar – but all that’s for naught if you can’t play the thing.

Why wouldn’t you be able to? Well, if you play electric or steel-string acoustic and you’ve been considering introducing nylon-string guitar sounds to your music, you might have stopped by a guitar shop and given a traditional nylon-string guitar a go. If you have, you’ll have noticed right away that the neck and fretboard are vastly different to what you’re used to: there’s often no fretboard radius at all, and the neck is much, much wider. If you’re not used to the much wider spacing and the complete lack of a radius, nylon-string guitars can be intimidating, requiring a lot of work to get used to, and switching back and forth between thinner, radiused necks can further complicate things. 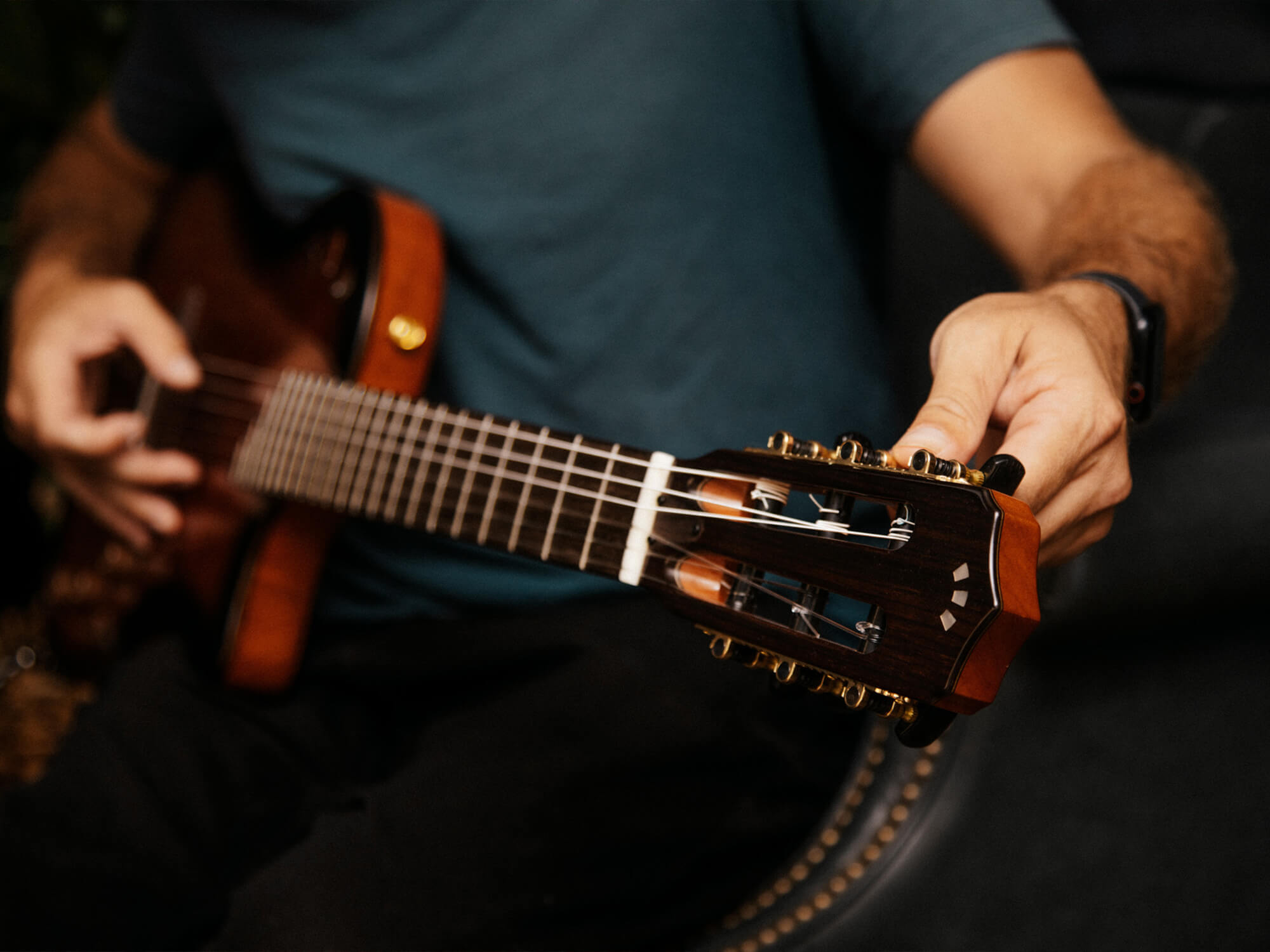 The Cordoba Stage has aimed to make the nylon-string guitar sound accessible to players who might not want to climb that particular wall. Rather than a traditional 52 mm, the Stage sports a 48 mm nut width. This isn’t quite as thin as a steel-string’s nut, often around 43 mm, meaning it still provides the wider string-spacing that classical chord voicings sometimes require. The fretboard also has a 16-inch radius, meaning chord shapes will feel a lot more natural if you’re used to electric, or have just found that traditional nylon-string guitarshave too wide a string spacing for your hands or playing style.

And the solid, chambered body that works to reduce feedback and increase resonance also helps the guitar be as thin as it is, while still sounding full and clear: it measures in at only 40 mm from top to back, thinner than even most steel-string acoustics.

Best of both worlds

The sound of a nylon-string guitar can be absolutely beautiful, and offer something completely different to what you might be used to. Similar to how the Fender Acoustasonic can bridge the gap between electric and acoustic, the Stage can make nylon-string guitars accessible to both steel-string and electric players. If you want to introduce the sound of nylon-strings to your repertoire, but are worried about the ergonomic challenges, you need not worry any longer. 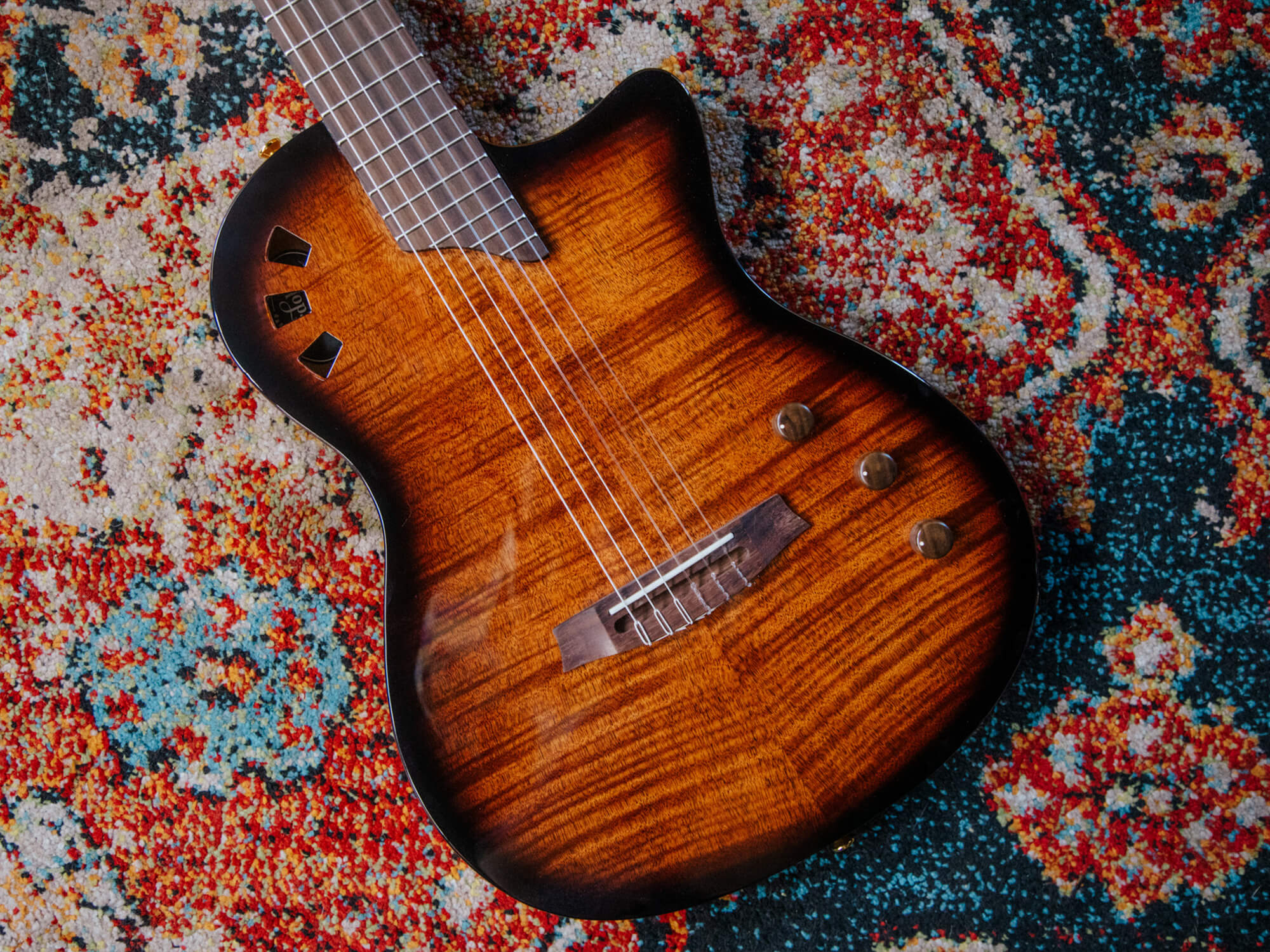 And, of course, hybrids go both ways: if you’re a classical player, but you’re finding yourself wanting a more ergonomic instrument, or you’re tired of having to dial out the feedback before every live performance, the Stage is a great choice for your next guitar.