All About… Ted McCarty

Ted McCarty was arguably the most influential CEO of any guitar company, and he designed more iconic hardware and guitars than pretty much anyone else. 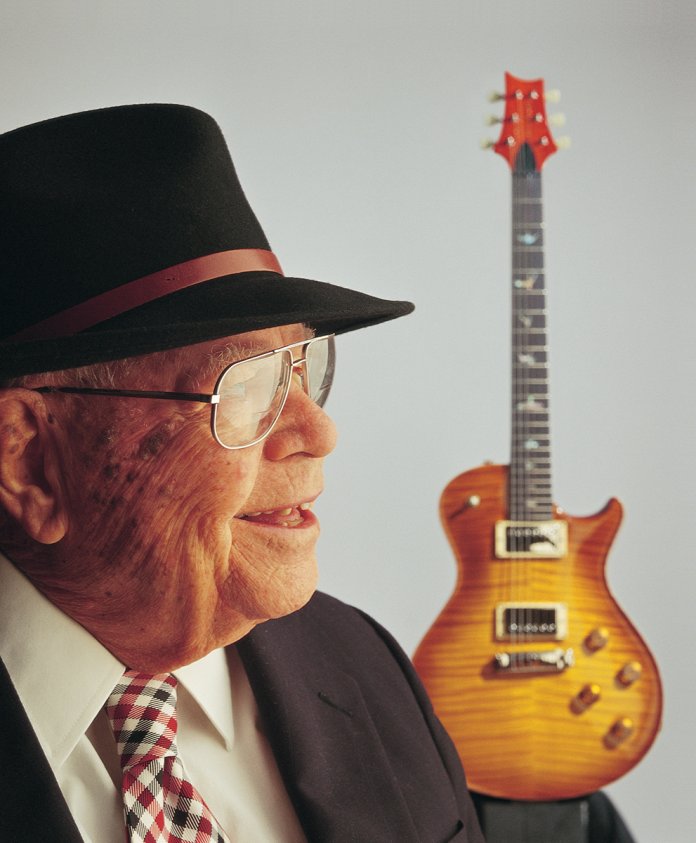 In a parallel universe, who can say what would have happened if Brach’s candy company had successfully managed to lure Ted McCarty away from Wurlitzer in 1948 – but instead he ended up at Gibson, where he became the company’s most beloved and influential head honcho, and a designer who changed the electric guitar forever.

Ted was born in Somerset, Kentucky in 1909 and by the time he was three, his mother had died. Soon after, Ted and his five-year-old bother went to live with their great aunt and uncle in Cincinnati. It was there he attended university, graduating in engineering while managing the college book shop.

Based in Cincinnati, Wurlitzer was a successful manufacturer of musical instruments and jukeboxes. Ted successfully applied for a job in 1936, but it was his experience in retailing rather than his engineering skills that got him hired. Ted stayed with Wurlitzer for 12 years, travelling all over the US with his family and living in several different cities. Brach’s had asked Ted to join as chairman, but with the company’s owner holidaying in the Bahamas, nobody was authorised to give the go ahead.

Ted was still waiting when he had lunch with Maurice Berlin, the owner of Gibson’s parent company Chicago Musical Instruments. The men had become friendly when Ted was a buyer for Wurlitzer. During their lunch, Berlin said, “Since you’re not busy, why don’t you go over to Kalamazoo on my expense account and see if you can find out what’s going on over there, and why I’m losing so much money?”.

Ted agreed, spending time at the factory and speaking at length with John Huis, who was then foreman in the finishing department. His report concluded the company was top-heavy and highlighted low morale due to fractious employee relations with general manager, Guy Hart. Clearly Berlin was impressed because he offered Ted a job with the promise, ”If you can turn the place around and make a profit, I’ll make you president of the company.”

That’s exactly what happened. Gibson had ceased instrument production during the Second World War because government restrictions on steel precluded installing trussrods, so the firm helped with the war effort instead. Post-war, Gibson was struggling to get making guitars again, and when Ted joined on 15 March 1948 he immediately set about restructuring the management and improving the working environment.

By May, Gibson was making money again, Guy Hart resigned in November and John Huis was promoted to superintendent. Ted was made executive vice president in June 1949, and then president a year later. Things stayed that way until he left in 1966 with Gibson operating at a profit throughout.

Joining Gibson gave Ted the opportunity to get back to his engineering roots. His business acumen was obvious, but when we look at the parts and models Ted designed and instigated, his achievements as a guitar innovator are equally impressive.

Let’s start with the stop tailpiece. In a 1978 interview for Guitar Player, Ted recalled: “Les Paul triggered the idea with his trapeze bar tailpiece. I got to looking at the bar type and decided that it had a couple of problems. I figured that if we fastened it on studs it would sustain just as well, maybe better, and we could raise and lower the studs; then with two setscrews, you could intonate it a little.

Most agree a stop tailpiece does wonders for sustain, and is tonally superior to the Tune-O-Matic bridge – although Ted invented that, too, in July 1952. Later, when it emerged that the saddles had a tendency to fall out, he devised the retaining wire to solve the problem.
Ted’s tenure had already seen the introduction of the ES-175, the Les Paul Goldtop and Custom, and the Junior and Special models that were the first affordable Gibsons to be designed for beginners. 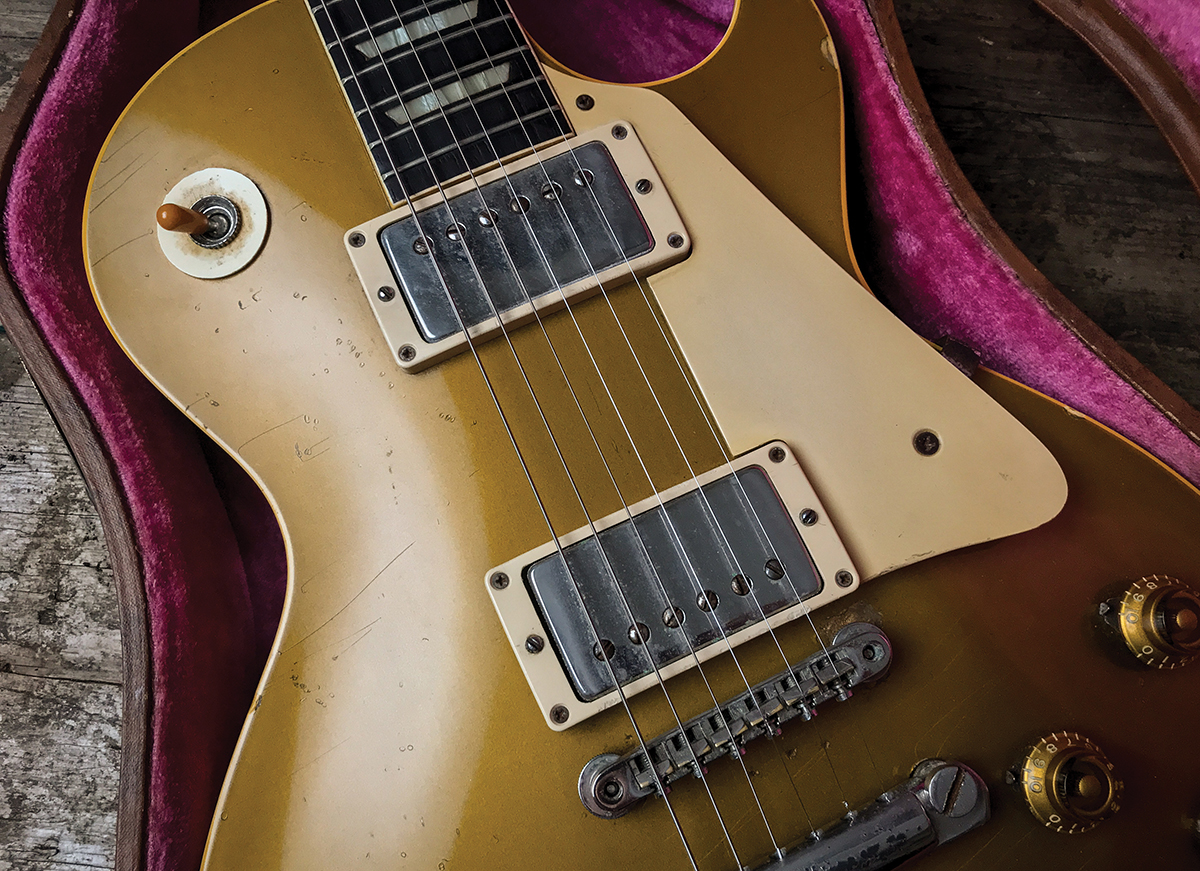 Business was good, but as a marketing guy, Ted was aware that Gibson guitars were seen as old fashioned in some areas of the market – particularly compared to Fenders. To redress the balance, he came up with the concept for the Flying V, Explorer and the fabled Moderne.

Ted recounted to Tom Wheeler how he “designed those three guitars with the help of a local artist… the dealers thought we were too stodgy, too traditional, so we decided to knock them off their feet”. Although they weren’t a commercial success, the Flying V and Explorer were just ahead of their time and would subsequently be relaunched. In the context of mid 1950s guitar making, this was guitar design at its boldest and most audacious.

Although the ES-335 is somewhat more traditional in appearance, its design concept is no less radical and you guessed it – Ted McCarty had a hand in designing that, too. Although he credited his engineering team with the overall design of the ES-335, ES-345 and ES-355 series, he claimed it was his idea to “put the solid maple bar down the middle”.

The semi-solids were much more successful than the ‘korina trio’ but Ted still felt Gibson needed a small and lighter solidbody once Les Paul sales had begun to tail off. That’s when he set about designing the SG and this time it was just radical enough. The name may have changed from Les Paul to SG soon after its introduction, but the model has been in continuous production since 1961 and it’s Gibson’s biggest selling model of all time.

Although Ted didn’t design the Firebird, he had a clear concept of what he wanted. Rather than do the drawings himself, Ted employed car designer Ray Dietrich, telling him that Gibson “needed something new and refreshing”. It may be radical in design, but the Firebird is more practical from a player’s perspective than any of the korina models. The various drawings Dietrich came up with were presented to the CMI sales people and based on their closer relationships with the dealers, they decided which to put into production.

However involved Ted became with hardware development and designing electric guitars, he still had a company to run. Fender’s electric bass models were very successful and Ted felt Gibson should take a share of that market.

Complications arose because all of Gibson’s acoustic bass building tooling and equipment had gone missing during the war. At the time Epiphone was still in the bass business and knowing that owner Orphie Stathopoulo wanted to sell the company, Ted let him know Gibson would be interested.

In 1957 Ted got the call and Gibson bought the Epiphone name and all the company equipment – but not the company itself, because Ted didn’t want to take on its liabilities. Employees were dispatched to New York and Philadelphia to collect everything from Epiphone’s production facilities. It was only after everything was set up in rented premises in Kalamazoo that Ted discovered they had all of Epiphone’s guitar jigs, too.

Calling a meeting with Maurice Berlin, it was decided that Gibson could now start producing Epiphone guitars as well as basses. One reason for this was that Gibson operated a franchise program to avoid having competing dealers within the same location. Since that meant good dealers were denied the chance to stock Gibsons, it meant they could be offered Epiphones instead.

By around 1960, all Epiphones were being made at the Gibson facility and such was the quality, they were direct competition for Gibsons. It was only after Norlin’s takeover of Gibson that the Epiphone brand was used for cheaper guitars produced overseas.

Clearly Ted was a shrewd businessman, and it has been documented that under his stewardship Gibson’s workforce expanded tenfold, production went from 5,000 to 100,000 guitars per annum, sales grew by 1,250 per cent, and profits increased by 15 times. Nevertheless, by the mid 1960s Ted could sense trouble brewing and he began looking for new opportunities. 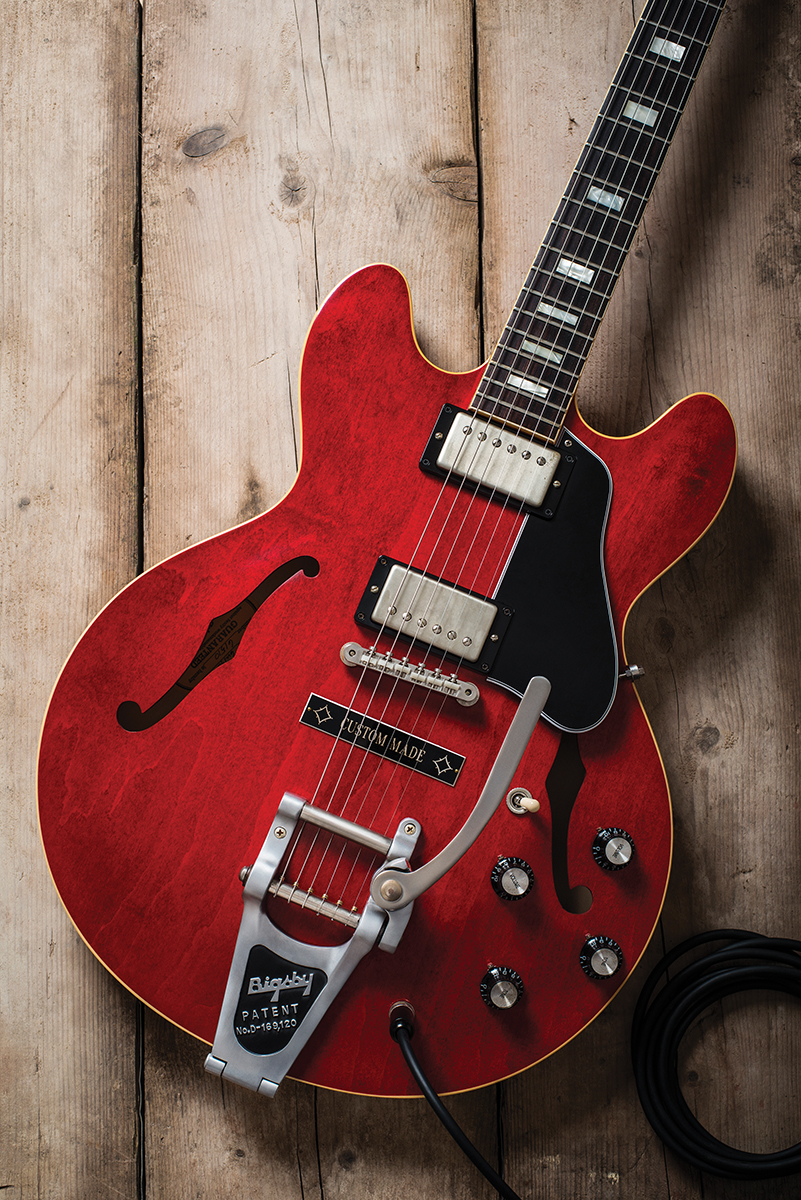 Ted and John Huis, who was by then Gibson’s vice-president, bought Bigsby Accessories Inc, in 1965. They tendered their resignations, with Ted leaving Gibson on 30 June 1966. Ted’s relationship with Paul Bigsby went back a long way because Gibson had been the first manufacturer to put Bigsbys on factory made guitars. He even helped to re-design the fixed Bigsby handle so it could be moved out of the way.

Bigsby production was moved from California to Kalamazoo and after a rocky patch during the late 1960s, the two former Gibson men managed to make a success of it. Ted actually spent more than twice as long with Bigsby as he did with Gibson. He and John Huis also diversified, buying a company called Flex-Lite that manufactured specialist lighting. At times Flex-Lite’s profits were needed to keep Bigsby afloat.

Paul Reed Smith became aware of Ted because his name kept appearing on Gibson patents. Smith has always sought out teachers and mentors so in 1986 Ted got a call offering him consultancy work. Smith “wanted to know what glues he used, what he glued the frets in with, how he levelled the fretboards, how he dried them, how he bound them and how he glued the necks on”.

By that time Ted’s wife’s health was failing and Ted was losing his eyesight, so travelling was problematic. Instead Smith flew out to meet him and spent a week with Ted at his residence in Maui, Hawaii and the men established a lasting friendship.

It’s worth considering that PRS was then a custom guitar builder but with Ted hired as a consultant, Smith essentially “downloaded the hard disk” and transitioned into factory scale production. Having played such a massive part in developing all of Gibson’s most iconic electric guitars, it’s curious that the only guitar that bears his name is the PRS McCarty Model. Although Ted asserted the guitar was entirely Smith’s design, Smith says: “everything Ted was teaching me is incorporated. He taught me how to make PAFs”.

Like Leo Fender, Ted couldn’t actually play the guitar, but he applied his engineering chops to improve the tone and playability of Gibson’s products and address the needs of musicians. In other words, he provided guitarists with what they needed rather than what he thought they needed and he valued quality over gimmicks. And when the korina models were introduced, Ted didn’t don a denim jacket to smash an L5 onstage. Ted died in April 2001 aged 91, but his huge legacy will never be forgotten.