Once you understand how patterns on the fretboard work, you can use them as shortcuts to find other notes and new ways to play your favorite riffs. 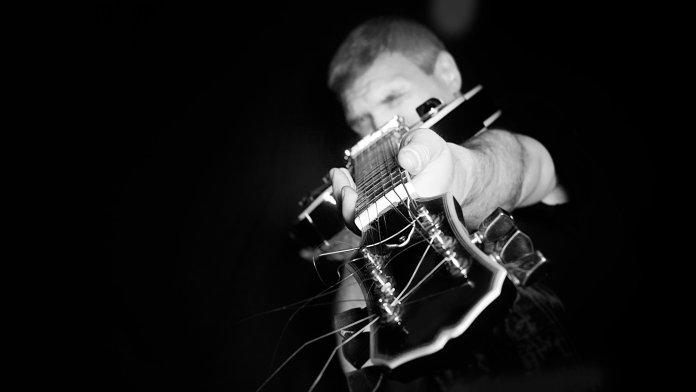 Few would argue against the point that Deep Purple’s “Smoke on the Water” has one of the most iconic riffs ever written. Which is probably why every guitarist around the world knows how to play it. But you don’t have to stick to the tabs you find online—there’s more than one way to play the riff on a guitar.

That’s what this lesson is about. We’ll show you how to use a few fretboard patterns as ‘shortcuts’ to discover new ways of playing the same riff or melody, whether it’s in a higher register or a different key. Employing these shortcuts will help you conquer the fretboard quickly and easily, without having to memorize all the notes.

There are two shortcuts we’ll introduce. The first revolves around using two notes as reference points to determine the positions of all other notes along the same string. And the second uses a pair of numbers—or ‘coordinates’—to help you find the easiest path from a note to its higher octaves.

We’ll use the E string to demonstrate this. You’ll first need to figure out where the E and B notes are. (Spoiler alert: The former’s on the open string and the latter on the seventh fret.)

Next, you can figure out F’s and C’s positions because these two notes are one semitone—or one fret—above E and B, respectively.

That brings the count up to four out of seven natural notes on the E string. Finding the remaining three is as simple: They are each located two frets away from their closest neighbors. For instance, the note after F, a G, is two frets up. Likewise, the note after C, a D, is two frets up, too. So the final note, an A, must then be on the last empty position: the fifth fret.

The pattern works on all strings. On the A string, the B note is located on the second fret, and the E on the seventh fret:

With this information, you can derive the positions of the C and F notes.

And all that’s left is finding the D and G.

And there we have it—a simple way to find all seven natural notes on any string with only the E and B.

Octaves make you a more versatile musician. They let you play melodies and riffs at a higher pitch, and, in this case, can help you find notes across strings.

The distance between a note and its higher octave is exactly 12 semitones, which is equivalent to 12 frets. But sliding up half the fretboard isn’t the best way to go from a note to its higher octave. Instead, try using ‘coordinates.’

A coordinate, in our case, comprises two numbers; for example, (2, 2). The first number denotes the number of strings to skip forward and the latter tells you how many frets to move up. So (2, 2) can be read as “two strings up, two frets up” and (2, 3) refers to “two strings up, three frets up.”

These two coordinates happen to be very useful formulas for reaching higher octaves: Use a (2, 2) movement if you start with a note on the two thickest strings, and use a (2, 3) movement if the note is on the middle two strings.

Imagine if a musical phrase begins on the A1 note, and you, the lead guitarist, want to play the same melody but in a higher octave. How would you do this?

The straightforward answer would be to use the (2, 2) coordinate to reach A3, because ‘traveling’ from A1 to A3 seems relatively easy. Right? Fortunately, it is.

What if you want an even higher pitch? No biggie. From A3, simply use the (2, 3) coordinate to land on A5. In this case, the second number is a three because of the way the B string is tuned.

So (2, 2) and (2, 3) are useful shortcuts to remember. They let you travel 12 semitones without having to flex your brain counting.

So how do these shortcuts work in practice?

The tubes have finally heated up and the band is ready to rock out. “Smoke on the Water” is on the setlist, and the bassist is armed and ready with that progression, which begins on an E note. (We know Roger Glover didn’t do this, but let’s just say your bassist is the flashy sort.) As the guitarist, how would you come up with something to complement the bassist?

Using what you’ve just learned, you can find E notes in the higher octaves, and begin the progression from those points. Here are a few examples:

Looking at the bassist’s fingers, you know that the E note lies on the open E string. To get to the next octave, use a (2, 2) movement and you’ll hop over to the D string. Playing the progression on this E note will yield a higher-pitched version of the melody.

What if you wanted to play that phrase in an even higher pitch? You can start with the E note on the D string from the previous example. A (2, 3) movement will now bring you to a higher E, which is on the B string. Beginning from this note, your progression will be two octaves higher than if you had started on the open E string.

With an E note on the A string, you can use a (2, 2), followed by a (2, 3), to figure out the position of two Es in the higher octaves. Either can be used as a starting point for a progression that starts in E.

Changing the key of the song

Now, your vocalist realizes he can’t hit the low notes, so he decides to raise the key by three semitones, from E to G. The progression now begins with a G, and you need to find a G note to start off with.

First, you’ll need to locate an E—say it’s the one on the D string. Then, use a (2, 3) movement to get to a higher octave. From here, it’s easy to find the F, which is one fret up, and then the G, which is a further two frets up. And if your singer wants to change the key again, you can use the shortcuts, too—or slap him in the back of his head for being wishy-washy.

With what you’ve learned, you can create new ways to play the same musical phrases, ending up with unique voicings that you might not have heard before. It’s also a great way to get acquainted with the higher areas of the fretboard, which you’ll need if you’re an aspiring lead guitarist.

Lzzy Hale on celebrating the women of heavy music “We defied the social norms of what this genre used to stand for and we’re...

Alex Lifeson declares his “touring days are over”, explains why he’s no longer interested in soloing