Session ace David Henriksson continues his exploration of the CAGED system by showing you how to bringing arpeggios into the equation can help take your playing to another level. 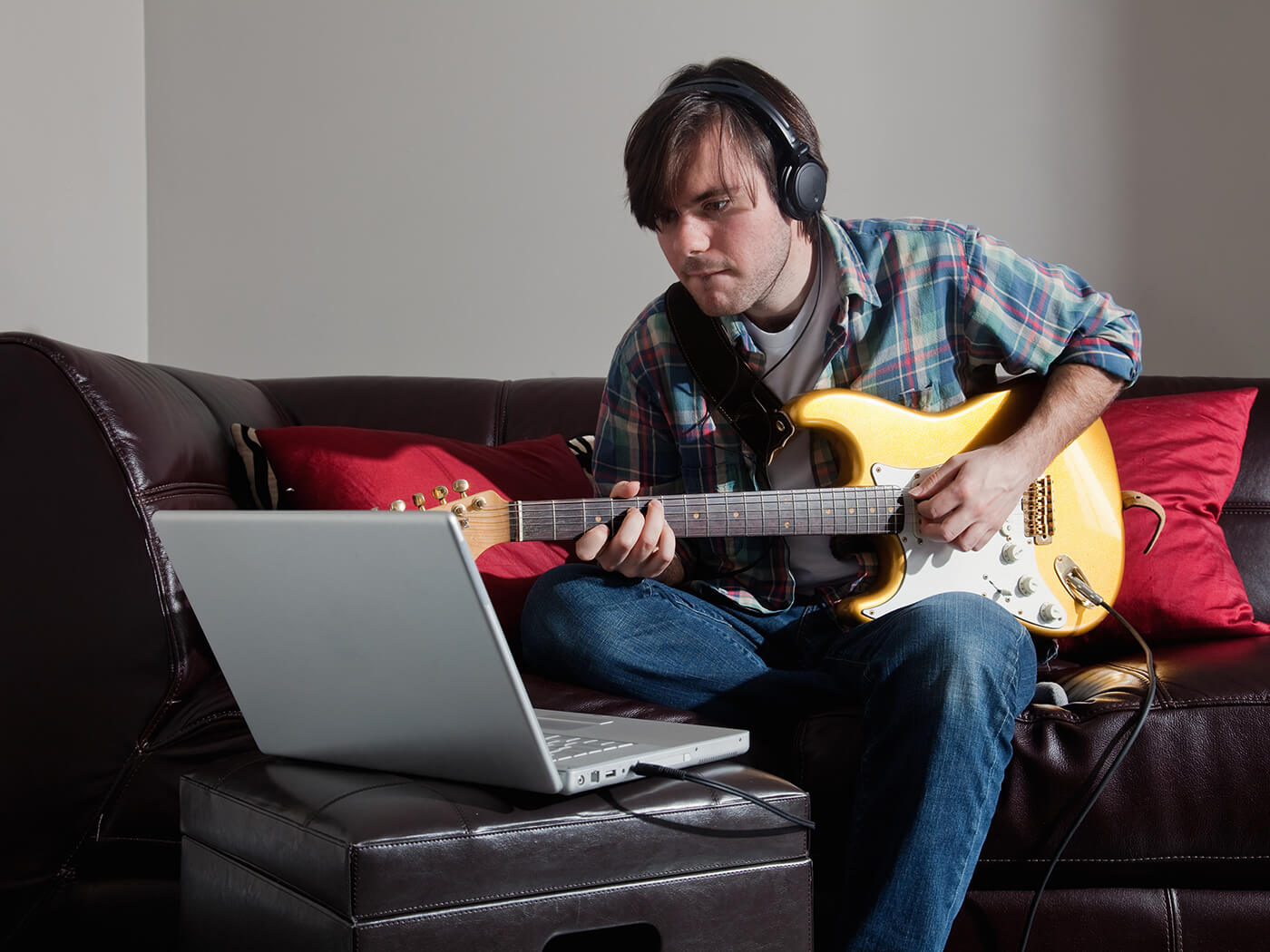 In the 5th part of this lesson series we’ll focus on arpeggios and how to see their connection to the CAGED system. Since arpeggios are basically chord tones played individually, you should see a lot of similarities to the previous parts about triads and extended chords. However, in the case of arpeggios we’re not limited to play just one note per string, so you’ll see some variation with fingerings.

Let’s start by checking out the harmonised C major scale in 7th arpeggios within a limited range of the fretboard (fret 7-10 in this case) and see which CAGED patterns we can relate them to. 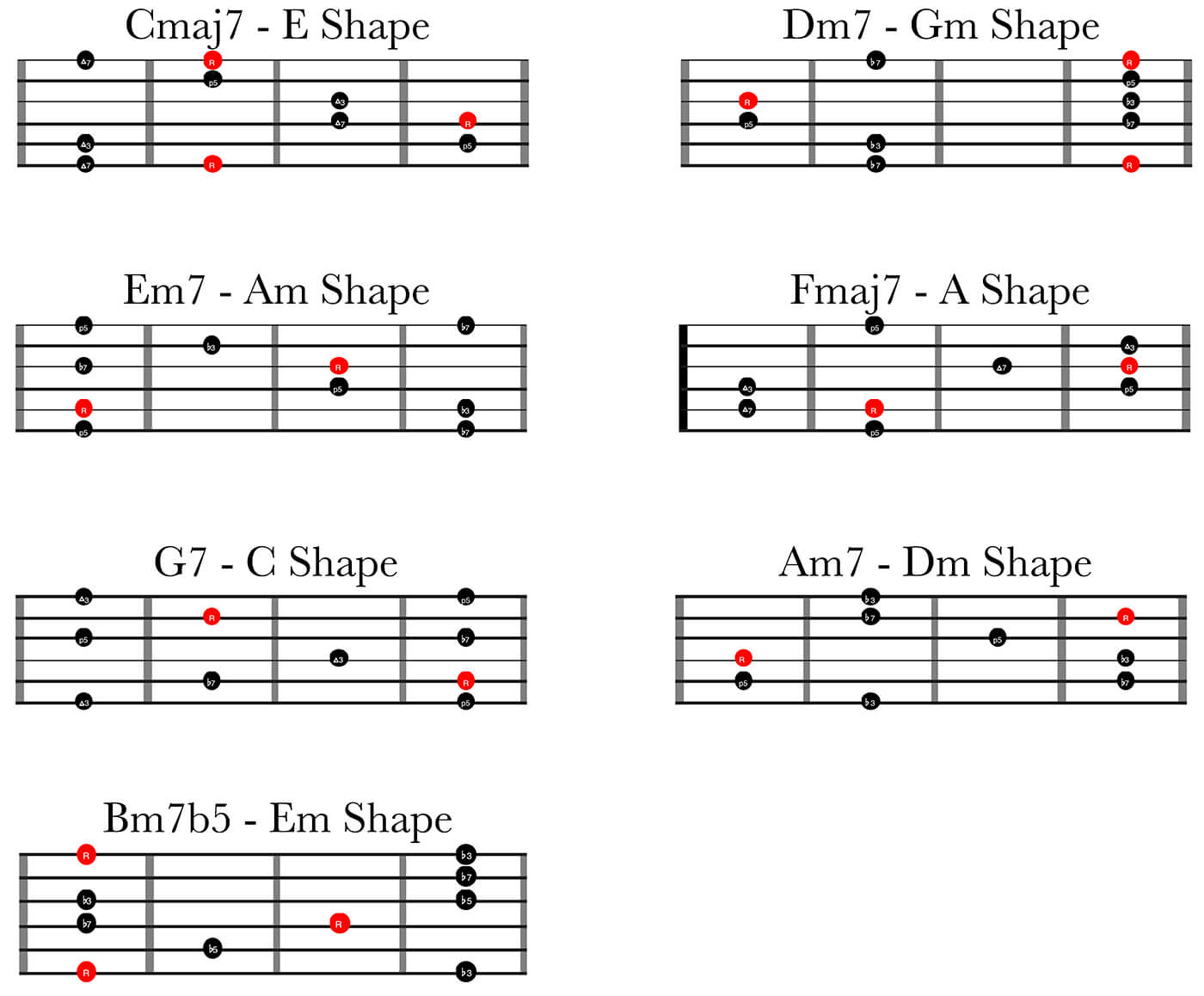 All of these notes are within the E shaped C major scale, but when we’re playing arpeggios it makes a lot of sense to actually shift your mindset towards seeing each individual CAGED shape for every new arpeggio to make it easier to locate the chord tones. If you haven’t worked a lot with arpeggios in the past I suggest that you start from the lowest root note available in your current position, this to make sure you have a good idea of where your harmonic centre is. Further down the line you can also play the lower chord tones that are available within each shape. Below you’ll find the same arpeggios but with fingerings starting from the Cmaj7 in the D Shape and all shapes will be between the 9th through 13th fret. 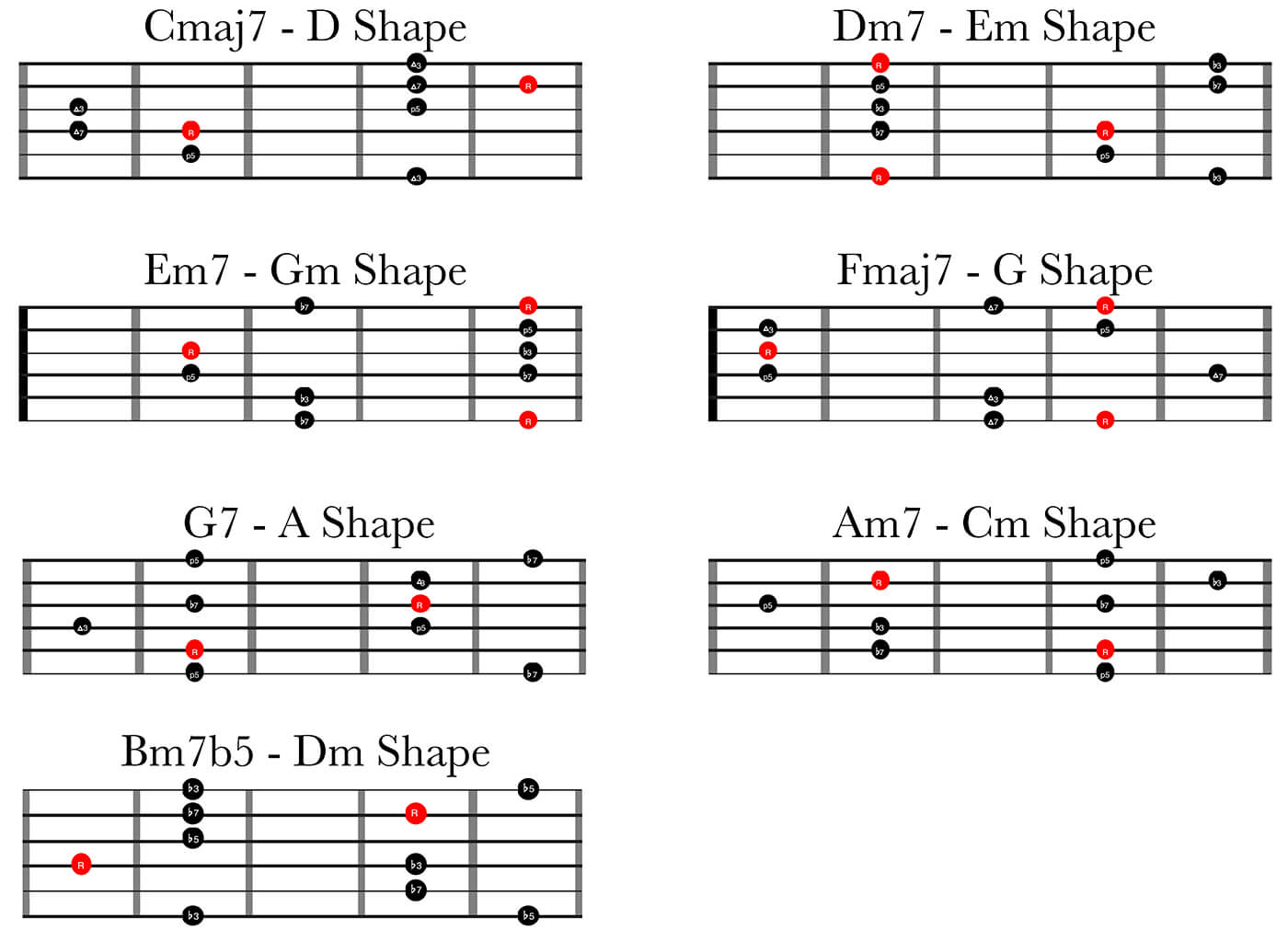 Now I want you to do the same thing while starting from the remaining three positions. Due to the standard tuning of a six-string guitar, consisting of perfect 4th intervals between all adjacent string pairs except for the G and B strings, we can find some useful two string arpeggio shapes which are moveable across the fretboard while keeping the exact same fingerings.

In the examples below I’m showing a major 7th arpeggio played with two notes per string, which is then moved between the different string sets and CAGED shapes. There’s also a minor add9 arpeggio with three notes on the lower string and just one note on the higher string, this is moved the same way as the maj7 arpeggio. Now check these out:

Also try to use the chord formulas we discussed in part 4 of this article series to find fingerings for minor 7, dominant 7, m7♭5, mmaj7, 6, add9 and so on.

Let’s check out some examples of how to use arpeggios in couple of jazz blues turnarounds. The first example truly just outline the chord changes by playing the root, 3rd, 5th and 7th of each given chord. The A7 and Bm7 are played ascending while the F♯7 and the E7 are played descending. Notice that every chord transition happens with a half step movement. The arpeggio is outlined with solid dots while the hollow dots shows the rest of the CAGED shape it’s derived from. This example is demonstrated between the 5th-12th fret. 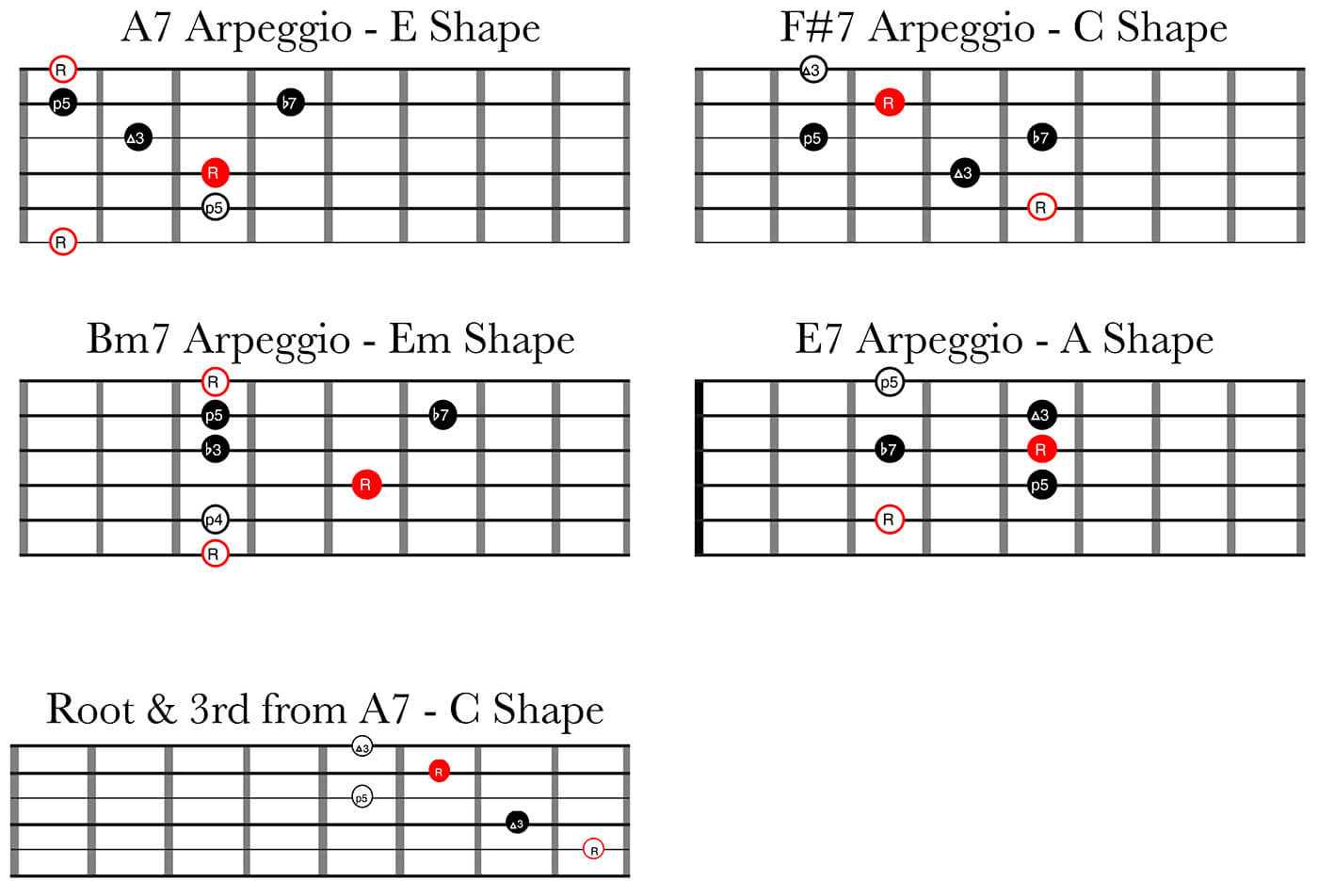 In the second example I’m demonstrating how to play superimposed arpeggios to give the sound of extended chords. Superimposing means playing a chord or arpeggio based off of a different root note. Here it starts with a C♯m7♭5 over the A7 chord – giving an A9 sound. Then A♯dim7 over F♯7 – giving an F♯7♭9 chord. Followed by a Dmaj7 over Bm7 – resulting in a Bm9 sound. And finally a Fm(add9) over E7 – adding the very jazzy alterations of the ♯5, ♯9 and ♭9. In this example the superimposed arpeggio is shown with solid dots while the hollow notes shows the rest of the underlying chord. This example is demonstrated between the 9th-13th fret. 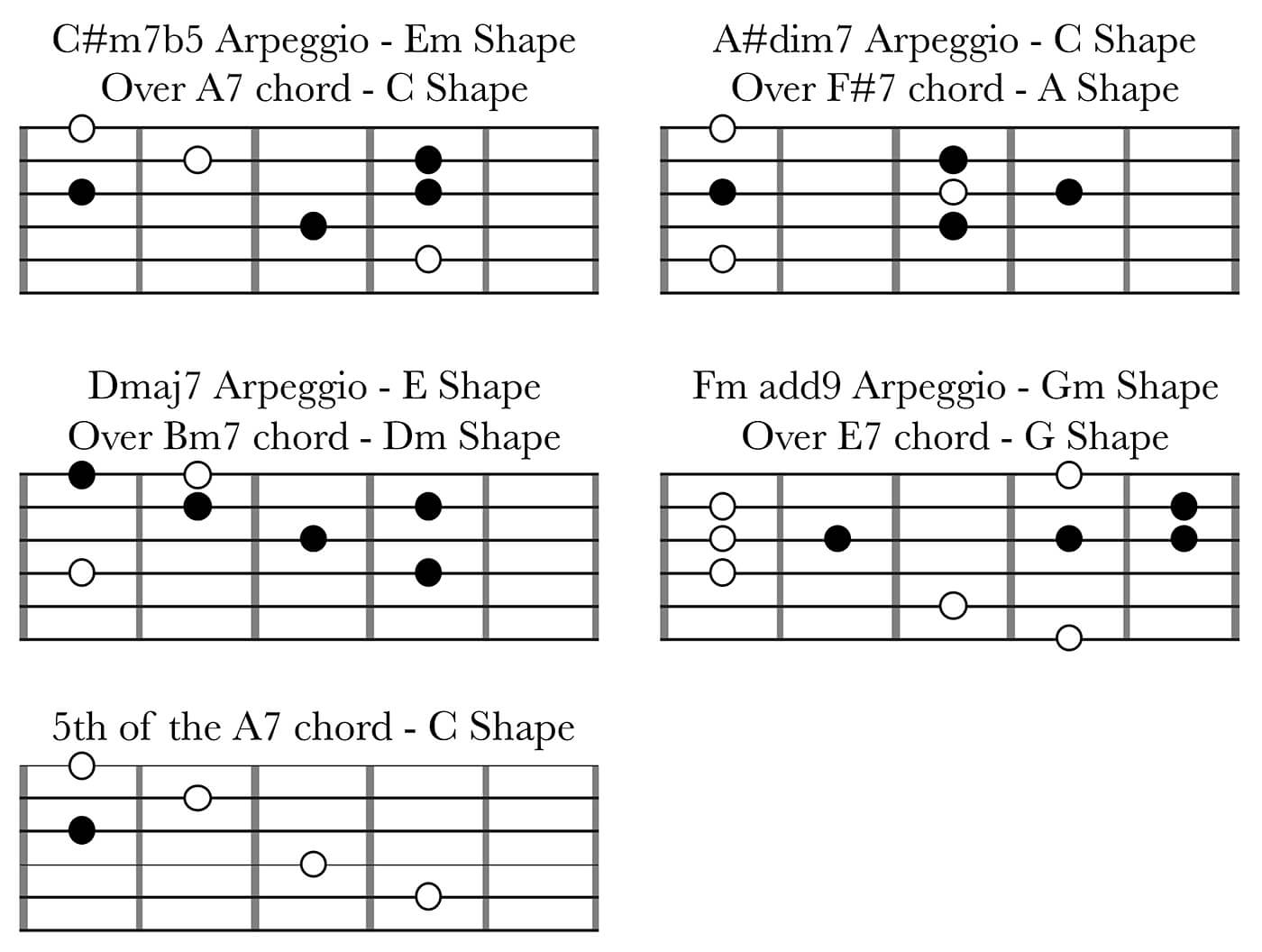 Since we got into using superimposed arpeggios over a chord progression, let’s also check out a few creative ways of superimposing triads over a static chord. The first one is played over an Amaj7(♯11) and contains the following triads:

Together all these notes is an A major scale with a raised 4th degree (commonly referred to as a ♯11) , this is also called the Lydian mode. Since this mode has both a major 3rd, major 7th and a sharp 11th it fits very well over an Amaj7 (♯11) chord. Instead of just playing stepwise melodies through the scale it’s common to use triads since they are strong melodic and harmonic building blocks, and stringed together like this it really shows the full harmonic qualities of the scale without actually sounding like a scalar line. Let’s try it: 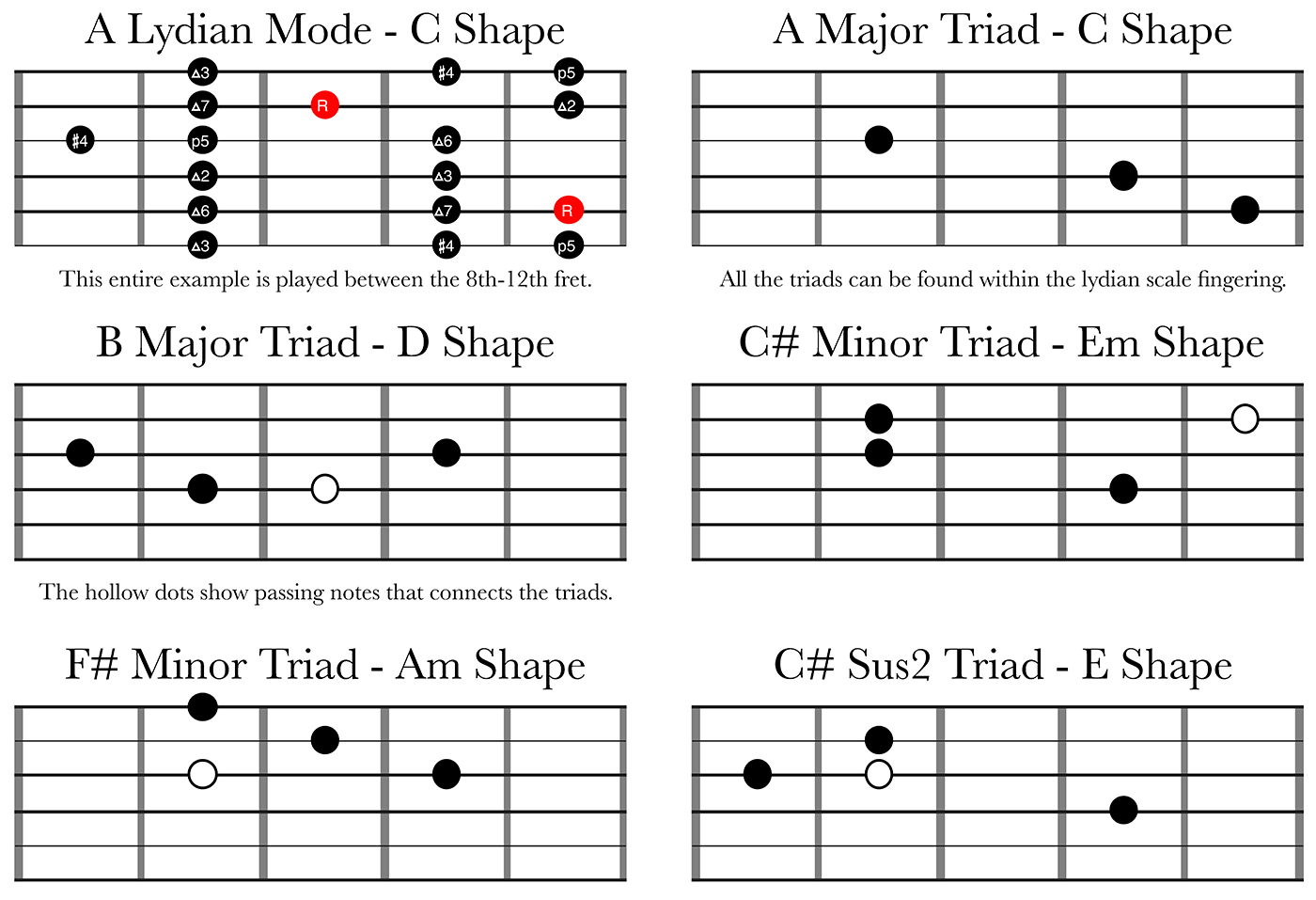 The next one is played over an Am6/9 and contains the following triads:

Together all these notes is an A minor scale with a raised 6th degree, this is also called the Dorian mode. The last arpeggio is an odd one, it’s a C major triad with a flattened 5th. Since the 5th of C is a G it would make sense to call the flat 5th a Gb but since the F♯ is within the A Dorian mode I chose to stick with that. This is called an enharmonic equivalent, meaning two notes that sound the same but is ”spelled” differently depending on context. All of this can we played within on position of the A Dorian mode, but it’s still important to visualise the individual triads and what CAGED shape they are derived from. Let’s give this one a shot as well: 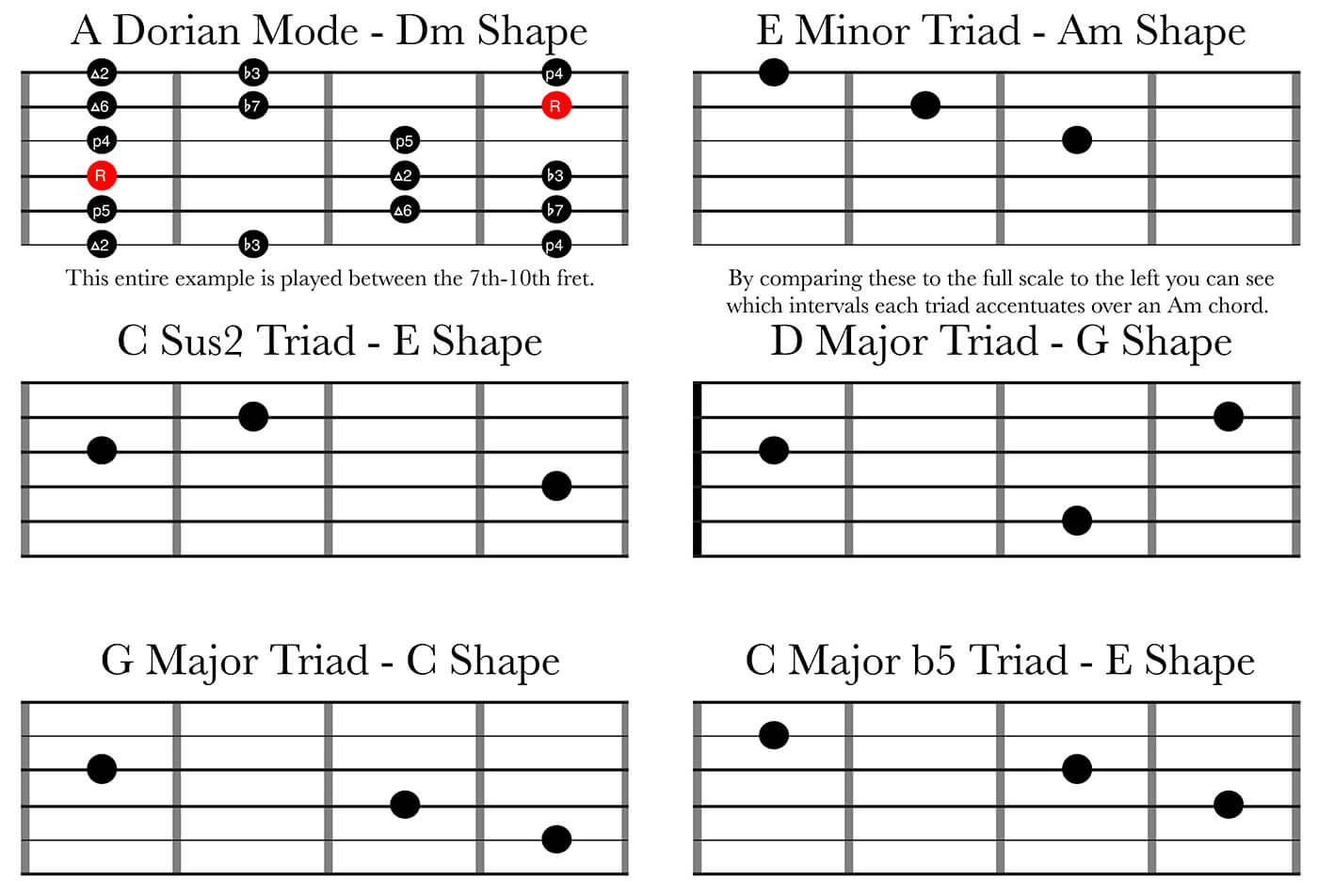 I hope this lesson has given you some insight and inspiration how arpeggios can be used. When improvising or composing solos arpeggios can truly be a great tool to make sure the melody connects to the chord progression. Next month, in our final part of this lesson series, we’ll dive deeper into scales and their connection to the CAGED system. You can expect to learn about modes of the major scale, melodic and harmonic minor, diminished scales and so on. Meanwhile, happy practicing! Over and out…