Continuing our journey through the guitar styles of the legendary Three Kings, this time it’s the turn of Flying V-toting blue icon Albert. 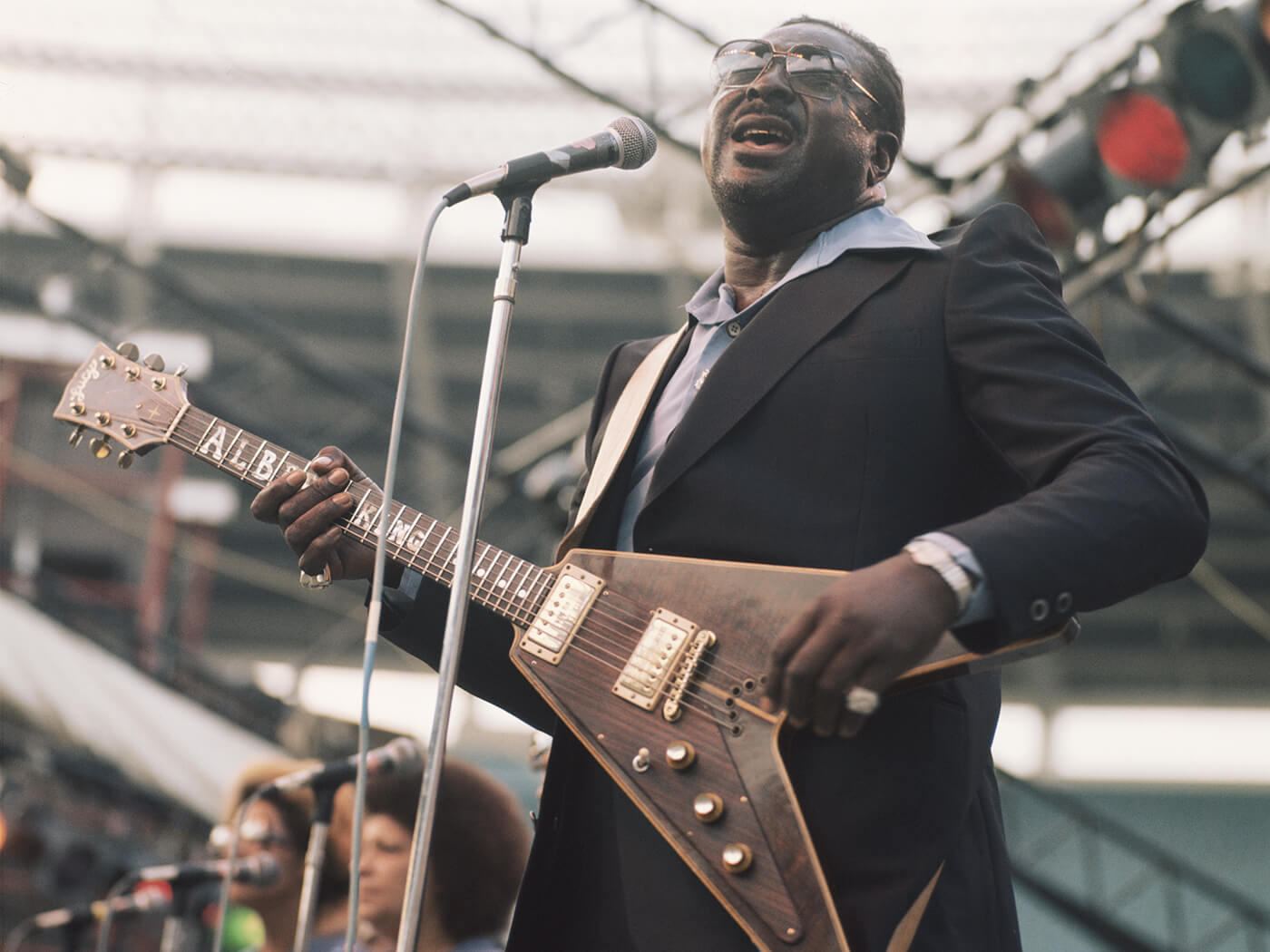 The impact of Albert King’s playing is as much about the guitarists he would go on to influence as the way he played himself – after all, without Albert’s music we might not have Stevie Ray Vaughan or Eric Clapton. But that doesn’t mean that King’s playing isn’t iconic, influential and important all by itself.

With his right-handed Flying V strung conventionally, but then flipped to be played left-handed, the Indianola, Missisippi native’s style was always likely to be different. But his unconventional set-up doesn’t account for the raw, dramatic power of King’s playing, which was often littered with some truly jaw-dropping bends – often a tone and half or two tones in width.

If you haven’t heard it recently, before we get into this lesson stick on his iconic 1967 album, Born Under A Bad Sign and bask in the genius of one of the true kings of the blues.

This first lick, like all of the licks here, is in the key of C♯ minor, and is a typical Albert King-style run. You’ll notice that we start with a bend on the second beat of the bar, followed by a run down the first shape of the minor pentatonic scale. By not coming in on the first beat, it give the part a slinky, behind the beat feel. The second bar uses the second shape of the scale to pull off a textbook Albert King lick, which is also a go-to for Eric Clapton.

The double bend is a hallmark of King’s solos, and you’ll see one at the end of the first bar here. Bend the 14th fret up a tone, release it, and bend it up again as the bars cross over. The rest of the lick demonstrates how you don’t need many notes to make a great guitar part – there are only three in the whole thing!

Sometimes a ‘wrong’ note can be effectively used in blues playing to create interesting textures, and it’s something King was a master of. In this case, you’ll notice we’re playing the F on the 13th fret of the top E string, which does not sit well in the minor pentatonic. The trick is bend it up half a step to so it’s in key, creating almost a slide guitar effect.

You can’t examine Albert King’s playing without tackling some huge, ambitious overbends. This lick is based around the third shape of the minor pentatonic and features some two-tone bends, which will take some practise! Namely, tou’re bending the 17th fret up to the pitch of the 21st. Play the target note first of all and get that in your head, then attempt the bend – Albert used light (0.009-0.052) strings, which makes these big bends easier. The first bar ends with a double bend. The first bend is a full tone, release that to the starting pitch then push it up two tones without repicking the note.

This final example uses the second shape of the minor pentatonic in the lower strings. It’s made up of some note patterns that may initially feel a little unusual under the fingers, as we start with a tone and a half bend before a three-note chromatic rundown. This lick has triplets on the second and fourth beats so be careful of the timing of those. You’ll notice that we end on the root note here, so it’s a great part to play when you’re returning to the I chord in a 12-bar blues.

Leigh Fuge is a guitar teacher and professional musician from Swansea, UK. He has taught hundreds of students face to face and via the MGR Music platform. He has more than 10 years of experience working as a touring musician, session guitarist and teacher. Visit mgrmusic.com to find out about guitar tutors in your area.