In our penultimate guide to the basics of country guitar playing, Nashville session man David Henricksson shows you how to create pedal steel-style sounds to elevate your licks.

After last month’s focus on doublestops it’s time to level up and start adding some country-flavoured bends – a lot of these ideas are inspired by the way pedal steel players use their foot pedals and knee levers. One of the reasons we’re going through these concepts after doing the doublestop lesson is because a lot of these phrases also use doublestops but with the added texture, expression and melodic possibilities that string bending offers. We’ll go through examples where the bends help us to highlight the chord tones of a static chord, outlining chord changes with, adding a slippery feel by using chromatic passing tones and much more. Get your fretting hands fingers ready for a bendy workout and your picking hand into hybrid picking mode and let’s head straight to the first idea!

We’ll start off with quite an easy idea. The key to make it sound good here is to focus on the intonation of your bend (which might sound quite obvious) but I’m referring to especially when you’re hitting the unbent B string. It’s quite common to hear players bend the G string perfectly up to pitch but then accidentally drop it a little flat when hitting the B string. Since we’re trying to imitate the sound of a pedal steel here, we’re gonna want to make these strings ring along with each other, therefore focusing on the bend even where you’re hitting another note is the challenge here. Check out the two examples where the melodic framework is the same but the rhythm changes. Experiment a bit and try to find your own variations in longer lines, listen to the audio examples for inspiration.

This example shows how you can outline the transition from the I to the IV chord as well as from the I to the V chord, all with quite simple bending ideas. We’ll start by bending into the major third from a whole step below and then adding the fifth on top and when transitioning to the IV chord we’ll bend up to the flat seventh from a half step below and adding the root note (this creates a certain dissonance due to the major second interval between the F and G) but then we release the bent note down to E and by that we’re outlining the major third and fifth of the IV chord. Now try to go through the same thought process and explain the transition from G7 to D7 to yourself.

Compared to the previous examples, now we’re gonna move between a few different positions.  This idea is based on a repetitive rhythm that is countrified even more thanks to the added ghost notes. The first two bars outlines a dominant 7th chord and instead of presenting which intervals are targeted, I’m gonna tell you which CAGED shapes I see these bends around. The first one is based around the D shape, the second around the E shape, in the second bar the two bends are based around the G shape and E shape respectively. As you can see it’s backwards compared to how the CAGED is spelled out, because we’re moving down the neck towards the nut. If this makes sense to you, you’ve probably come a long way in understanding the layout of the fretboard. Otherwise I’d highly encourage you to look deeper into the CAGED system.

This is a kinda slippery sounding phrase, mostly because it doesn’t just outline chord tones like the previous examples but it also includes some chromatic passing notes with bends. I’d start by playing this without the bends first, then you’ll notice you’re outlining a D major triad, a C♯ major triad, a C major triad, a D7 (without the fifth) before ending on the major third and root of the G chord. The D is very obvious right? The C is built off of the seventh degree from the mixolydian mode (which is the most common to use for dominant 7th chords), so that also makes sense. The D7 leads us in a very natural way to the G, but how does that C♯ major triad fit in with all of this?? Well, placed chromatically in between two triads that are within the key it adds a little cool twist but it resolves so quickly so our ears won’t think it sounds weird. Now just add those bends and you have a really awesome lick.

Remember what I said about focusing on the intonation of the bent notes on the G string while hitting notes on higher strings in Ex. 1? Well, if you practiced that properly, it’ll certainly help you here. Using this bent note as a pivotal point we’ll play a descending E mixolydian scale on the high E and B strings. With some practice you’ll start to hear how the overtones really melt into each other in a rich and beautiful way.

This doesn’t have the same pedal steel influence as the previous ideas but these bends together with the ghost notes will (hopefully) take you into chicken pickin’ heaven. Let’s start with a descending mixolydian line, starting from the flat seventh and bending a whole step on the G string to target the same notes on the B string. The ghost notes on the G string is what adds the spice here, I think, so make sure to focus on getting them right. I play a downstroke on the G string, pull the B string with my middle finger to give it a snap, then do the ghost note with an upstroke on the muted G string. The final part of the lick is a blend between the mixolydian mode and the blues scale with some half step bends that gives it a bit of a jazzy feel thanks to all the chromatics in there.

Sore fingertips? Well, I don’t blame you if that’s the case! I hope you learned some stuff and feel like these ideas and concepts opened up your mind on how to implement bending in your playing in a fresh way. Next time we’ll put all these techniques we’ve worked on; open string ideas, double stops and pedal steel inspired bends, and put them together into a full solo. Practice hard ’til then, but also be careful with those calluses, some of these bending ideas have a tendency to wear them out. See ya next month! 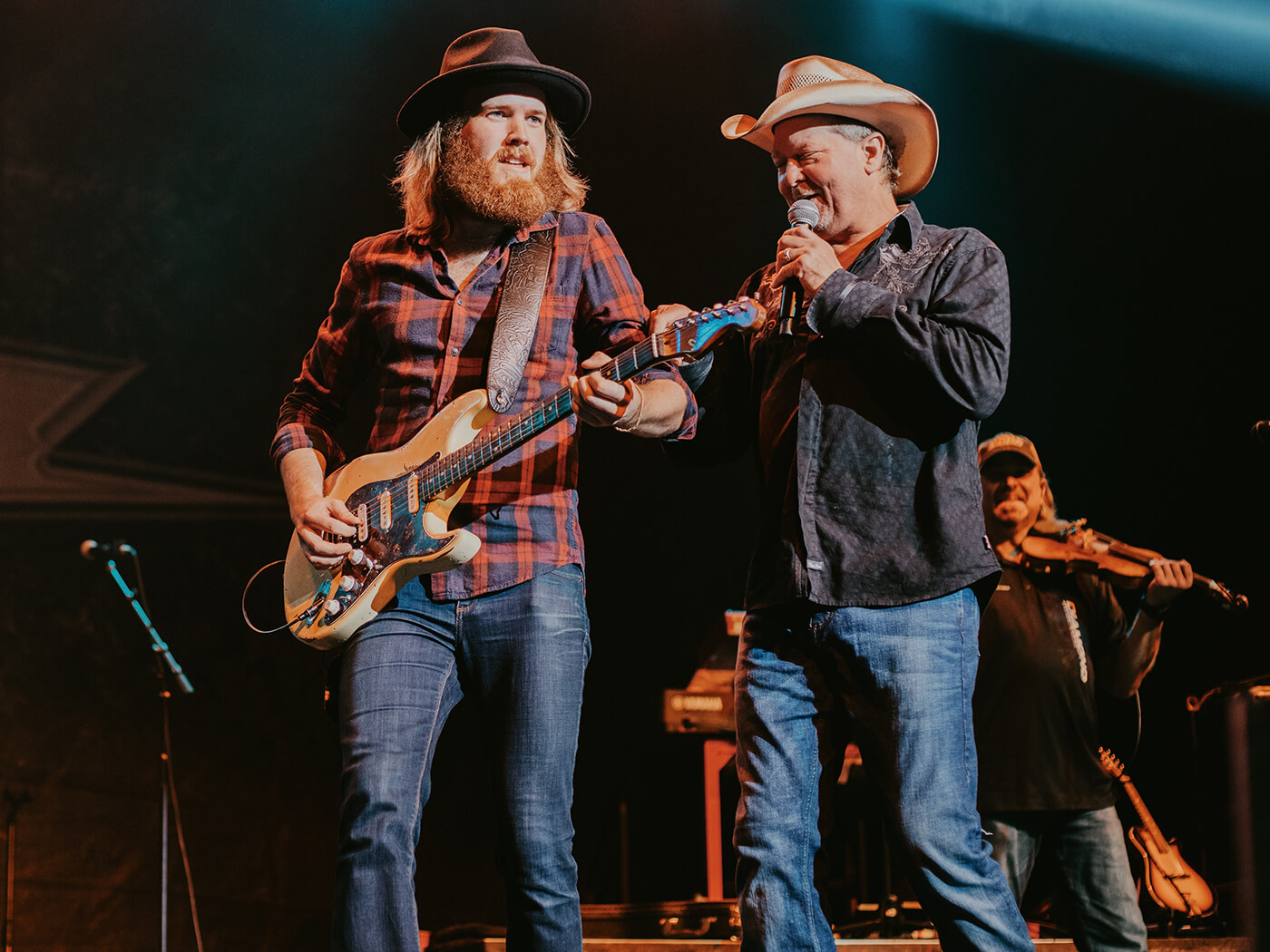