In our new-look Chord Clinic column, we’re going to explore the interesting variations on classic chords that can add some variety and interest to your playing and songwriting. 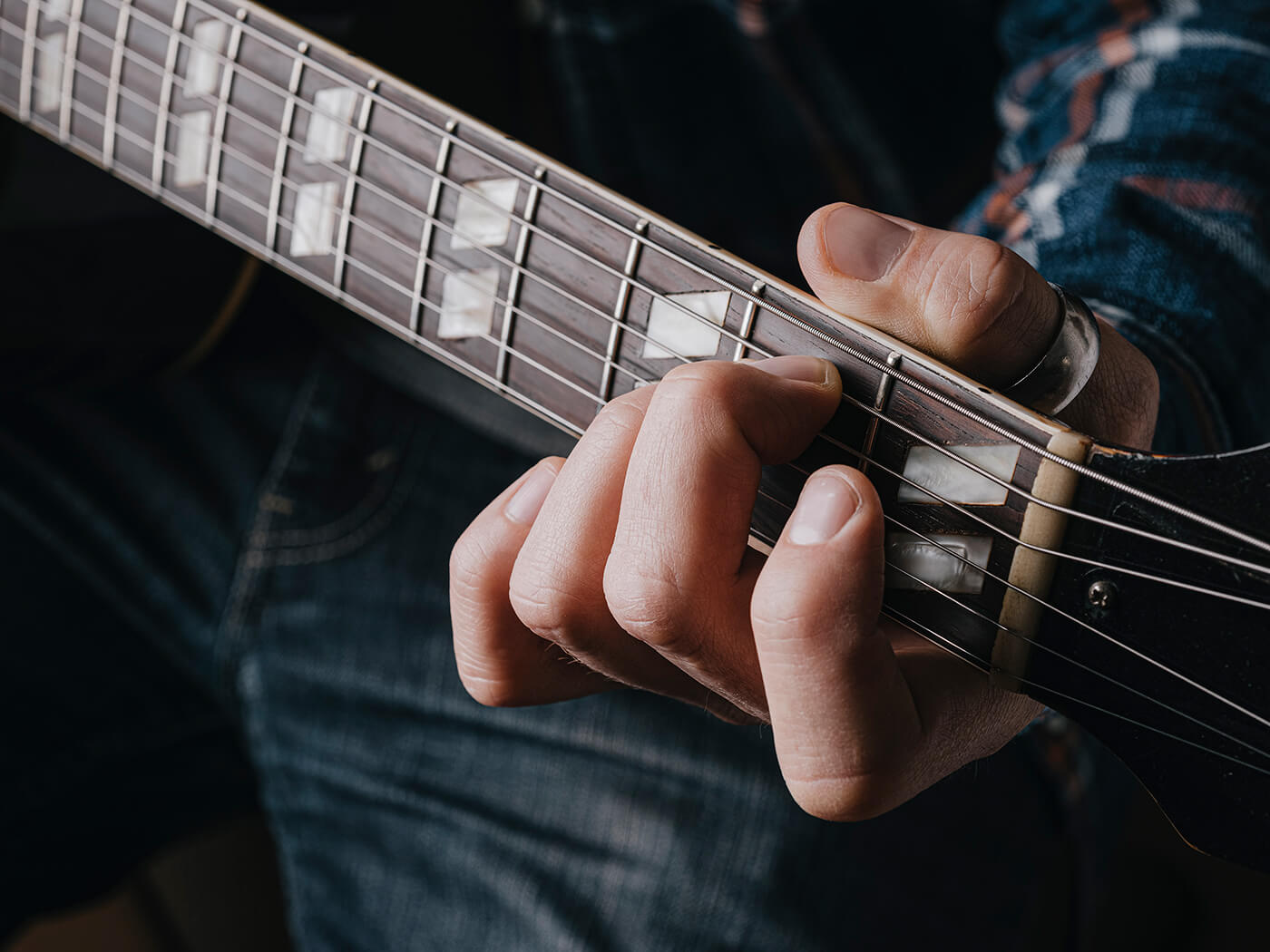 E minor is one of the easiest chords you can play on the guitar. It only requires two fingers and, being the lowest pitch minor chord you can play in standard tuning, has considerable heft. Like all minor chords it needs just three notes, the root, third and fifth, which are E, G and B. The note G is three frets higher than E, making it a minor third and giving the chord its minor flavour. For comparison, G♯ is the major third and would make a major chord if added to E and B.

E minor is the opening chord of Neil Young‘s moody Separate Ways, and we like the subtle tremolo on E minor in the Venture’s version of Pipeline. You can also hear Gabrielle Aplin give this chord a good strumming at the start of Keep On Walking. Enjoy playing these examples and we’ll be back next month with more chordy goodness. 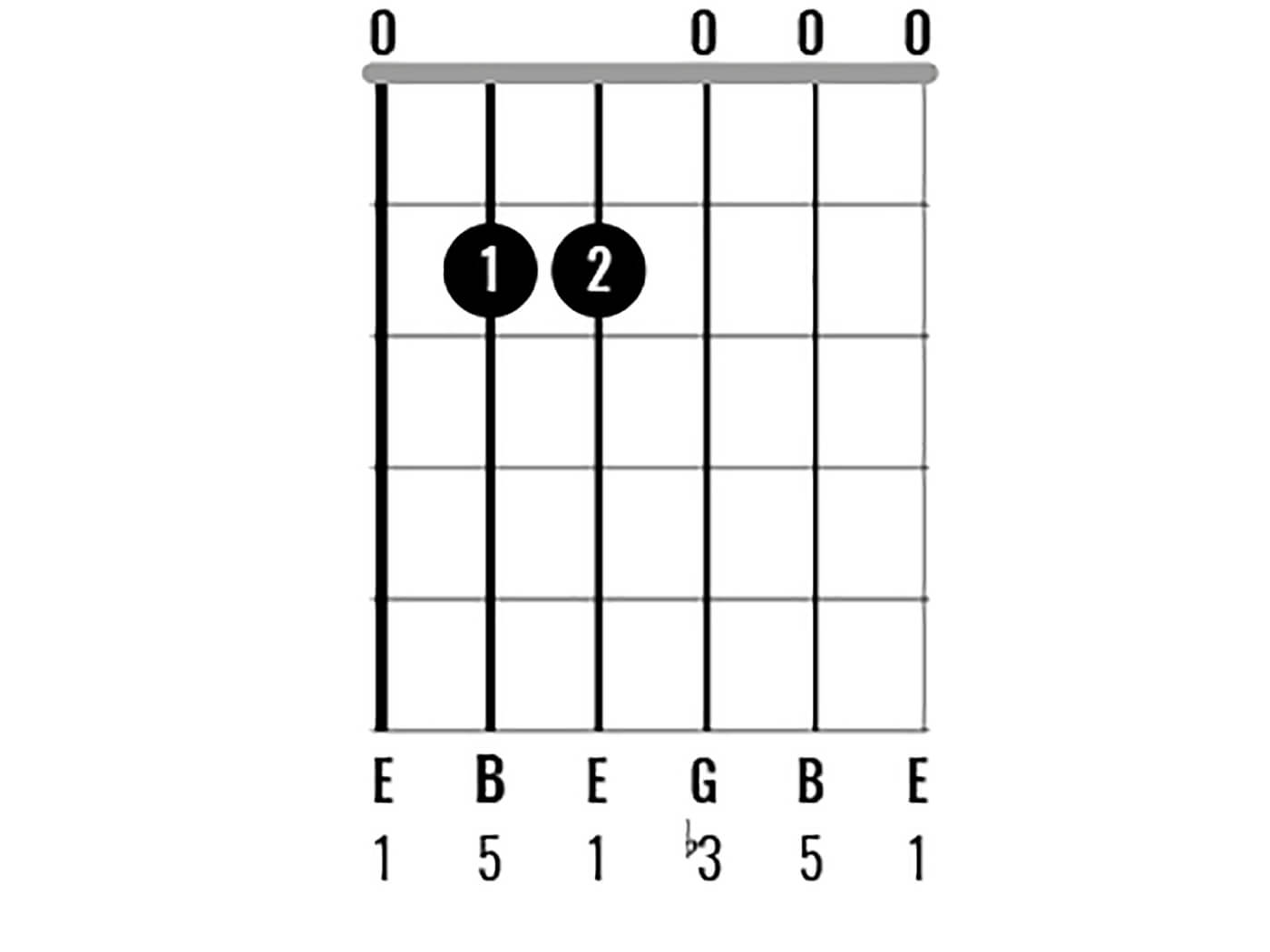 Chords like this are known as open-string chords as they contain a mix of open strings and fretted notes. In this open string version of E minor some notes are repeated – B occurs twice and E three times.

A chord which you can play with only two fingers means you have a few spare fingers to add other interesting notes. Here we’ve added C♯, the major 6, to create an edgy-sounding E minor 6th chord. 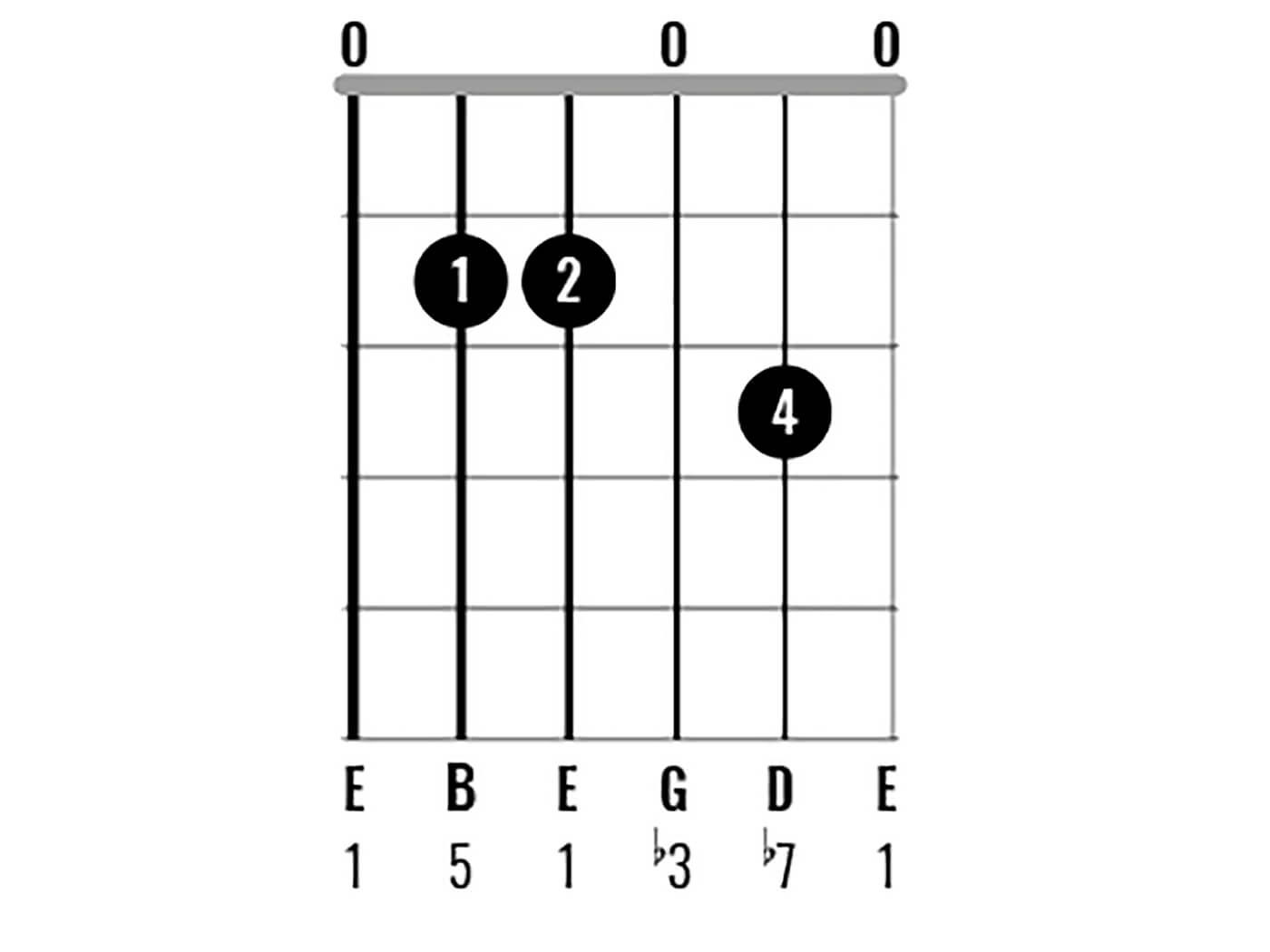 Adding the note D to the basic chord gives us E minor 7. Try combining it with figures one and two to add movement while broadly staying in E minor. 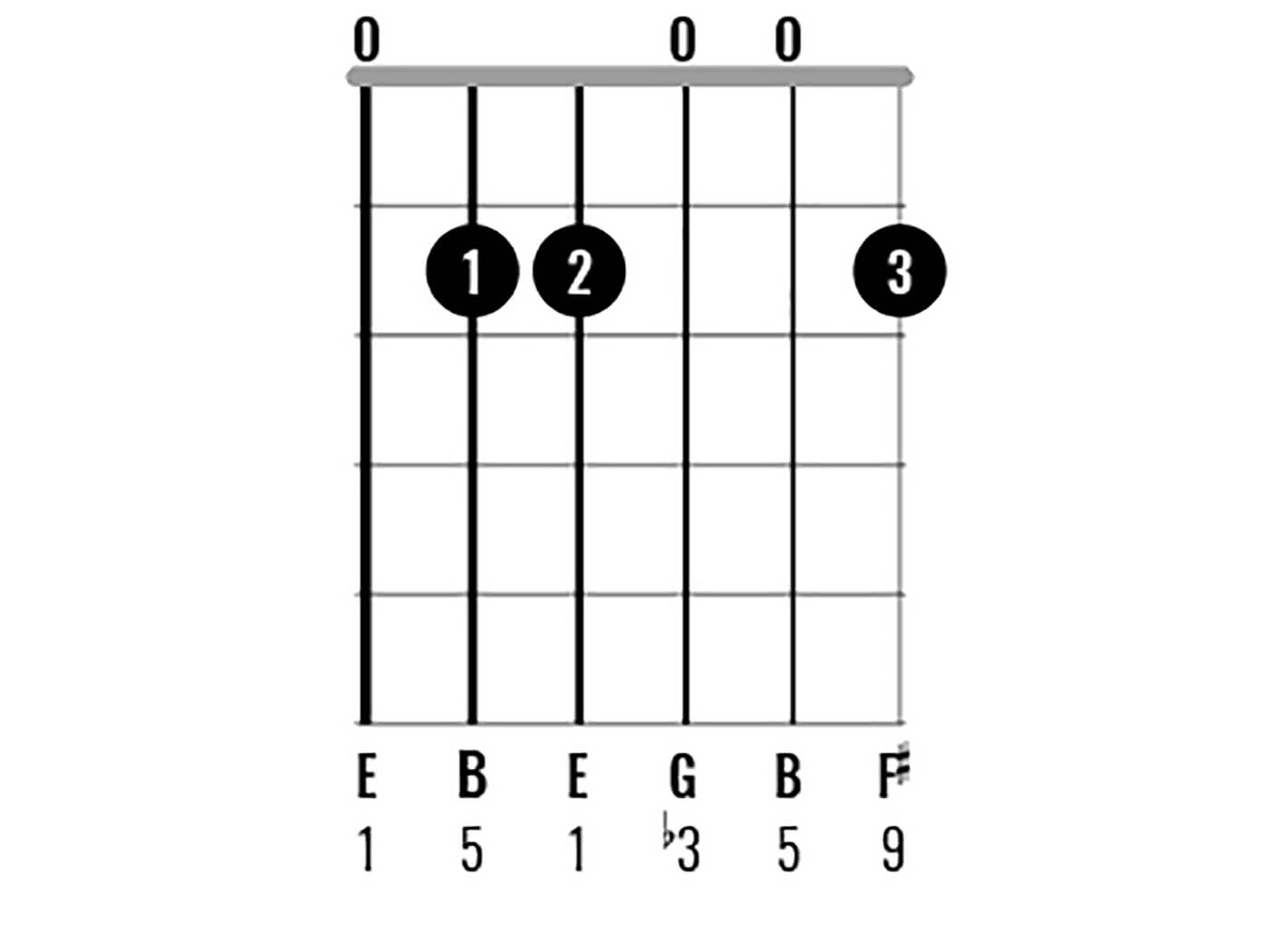 The added note trick works well on the top string too. Here we have added F♯, which is the ninth note up the E minor scale and gives us a chord of E minor add nine. Have a listen to Paul Weller’s You Do Something To Me for inspiration on how you can incorporate this chord into your playing. 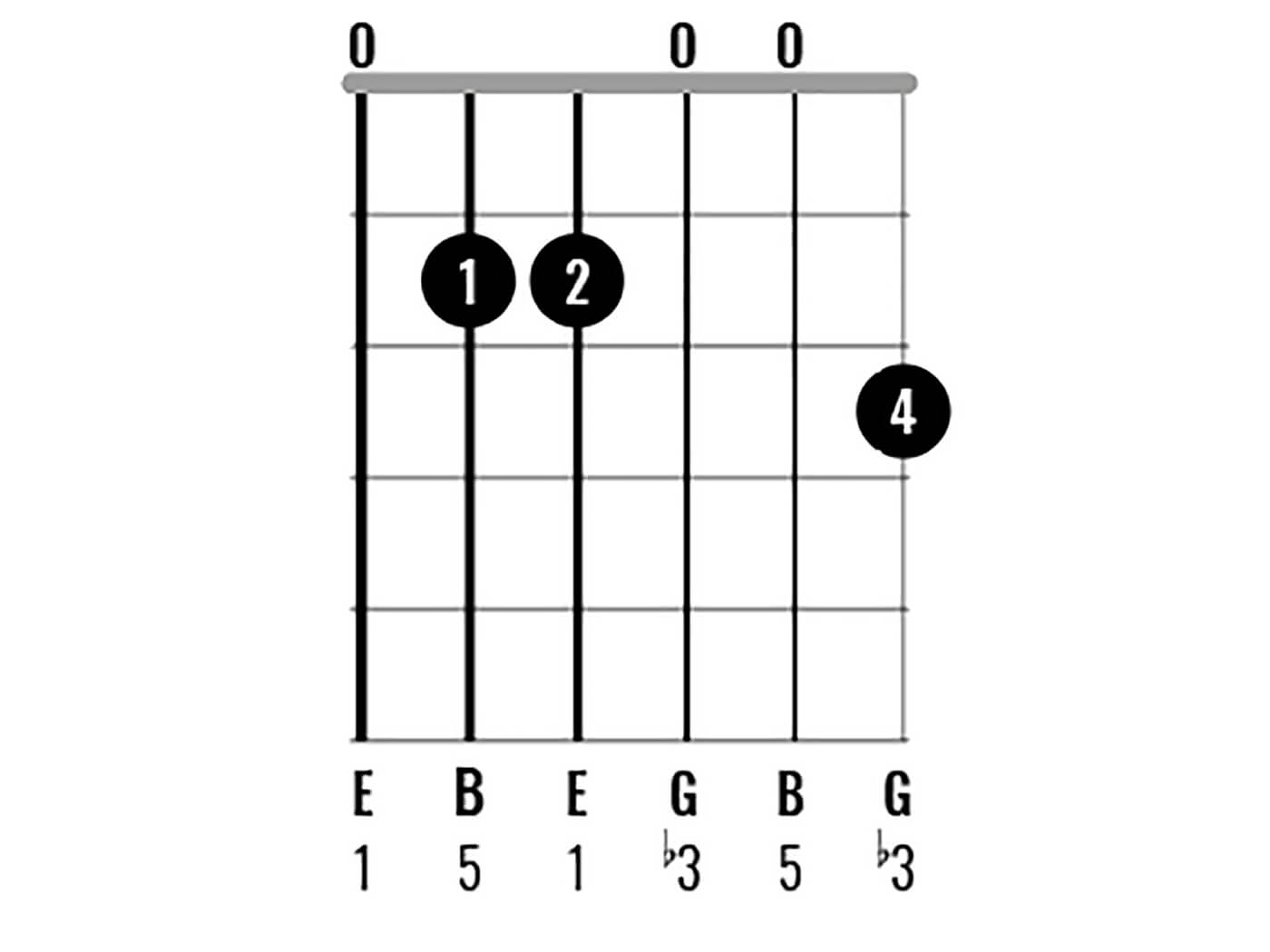 Here we’ve added the note G on the top string which works well combined with Figure 4. It doesn’t change the name of the chord as G is in the chord already – it’s just another voicing of E minor. 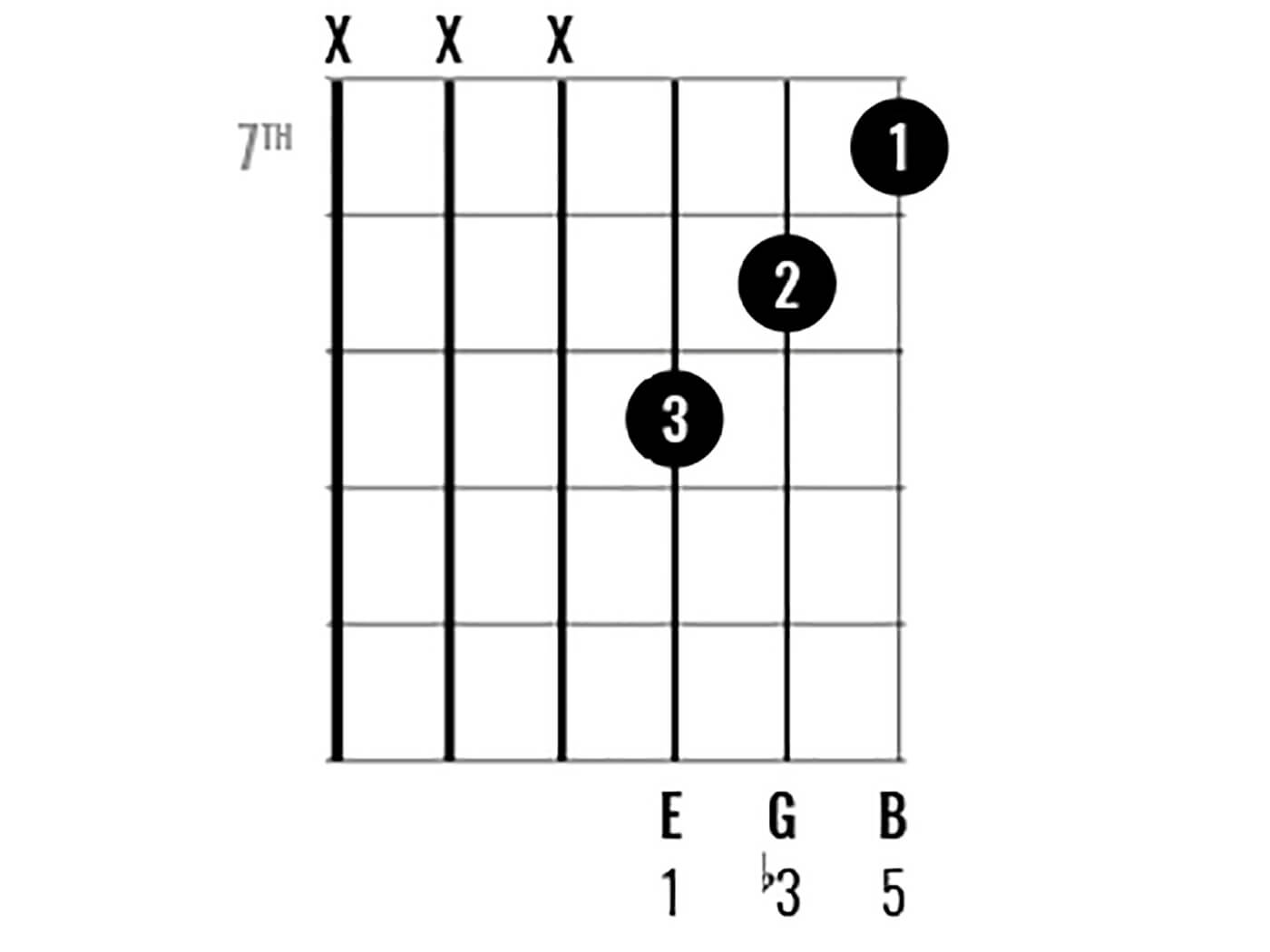 Anywhere you play the notes E, G and B together it’s an E minor chord. If E is the lowest note the chord is in root position. Three note chords played higher up the neck are great for choppy or funky rhythm parts. 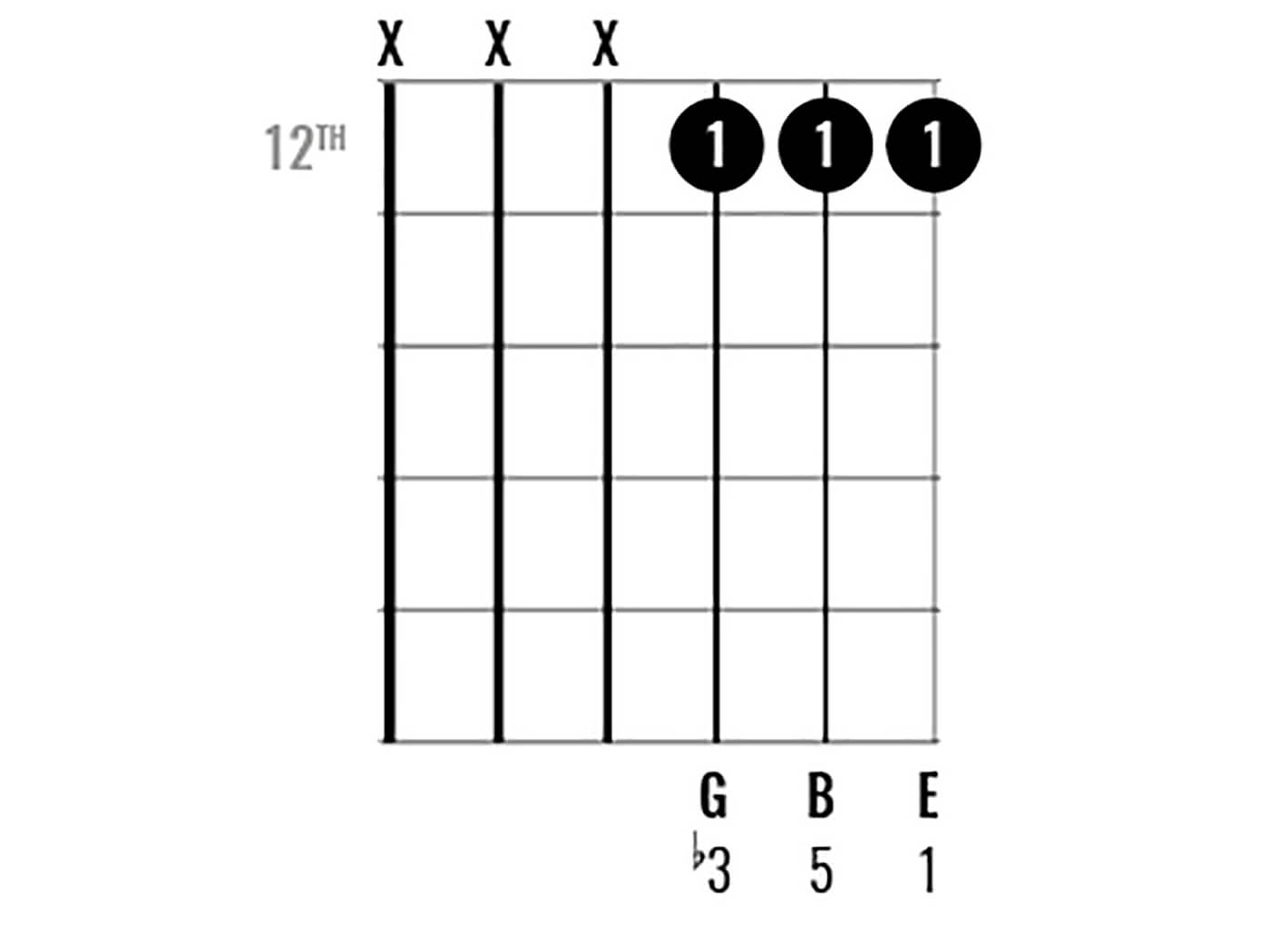 Here we have a first inversion E minor chord, because G, which is the third, is the lowest note. Try combining it with Figure 6 for some funky strumming. We use a forward slash followed by the bass note when the chord is not in root position. 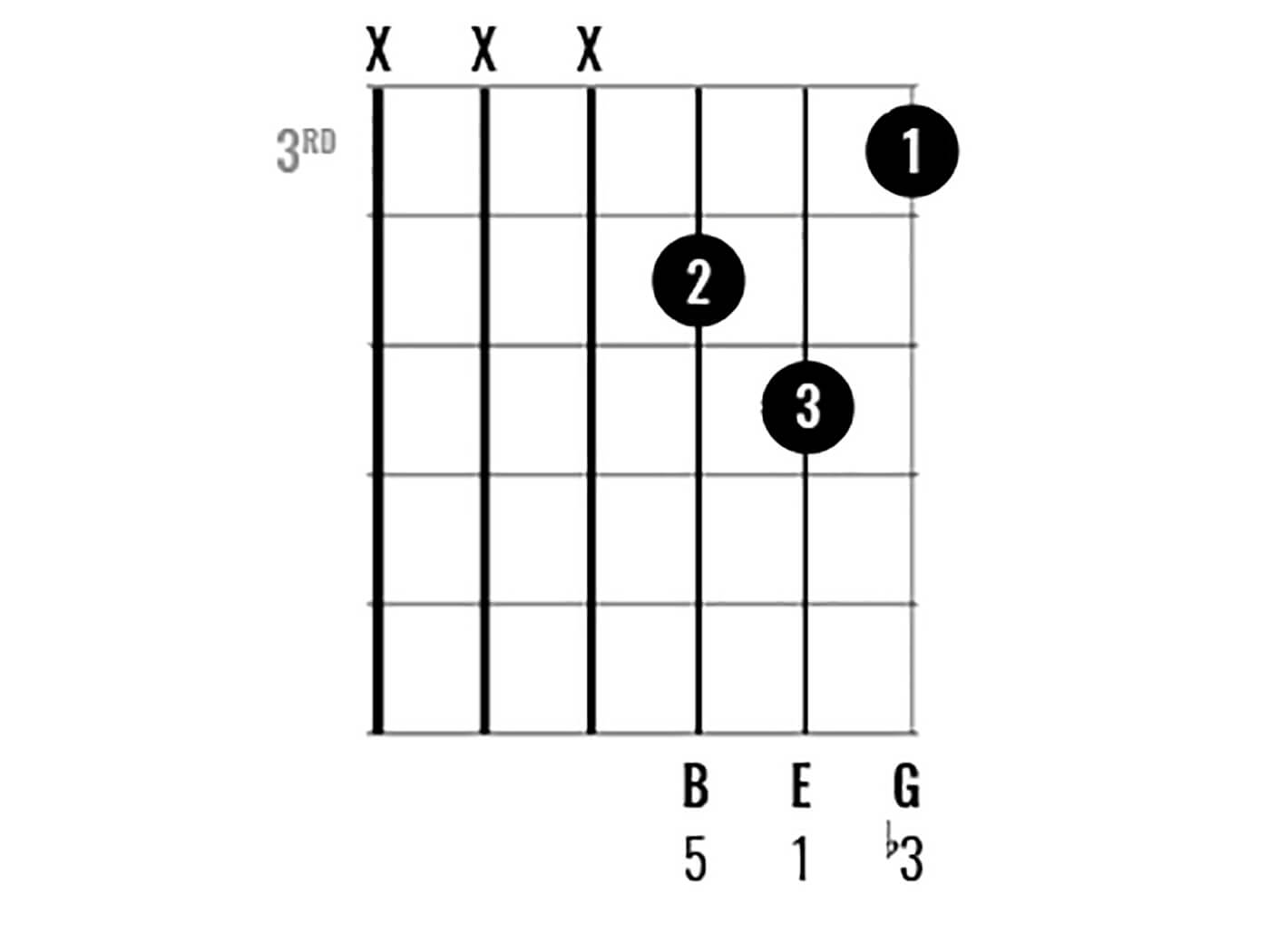 This time we have a second inversion – the 5th of the chord, B is in the bass, so it’s another slash chord. Try finger picking figures 6, 7 and 8 while picking the open low E string with your thumb. 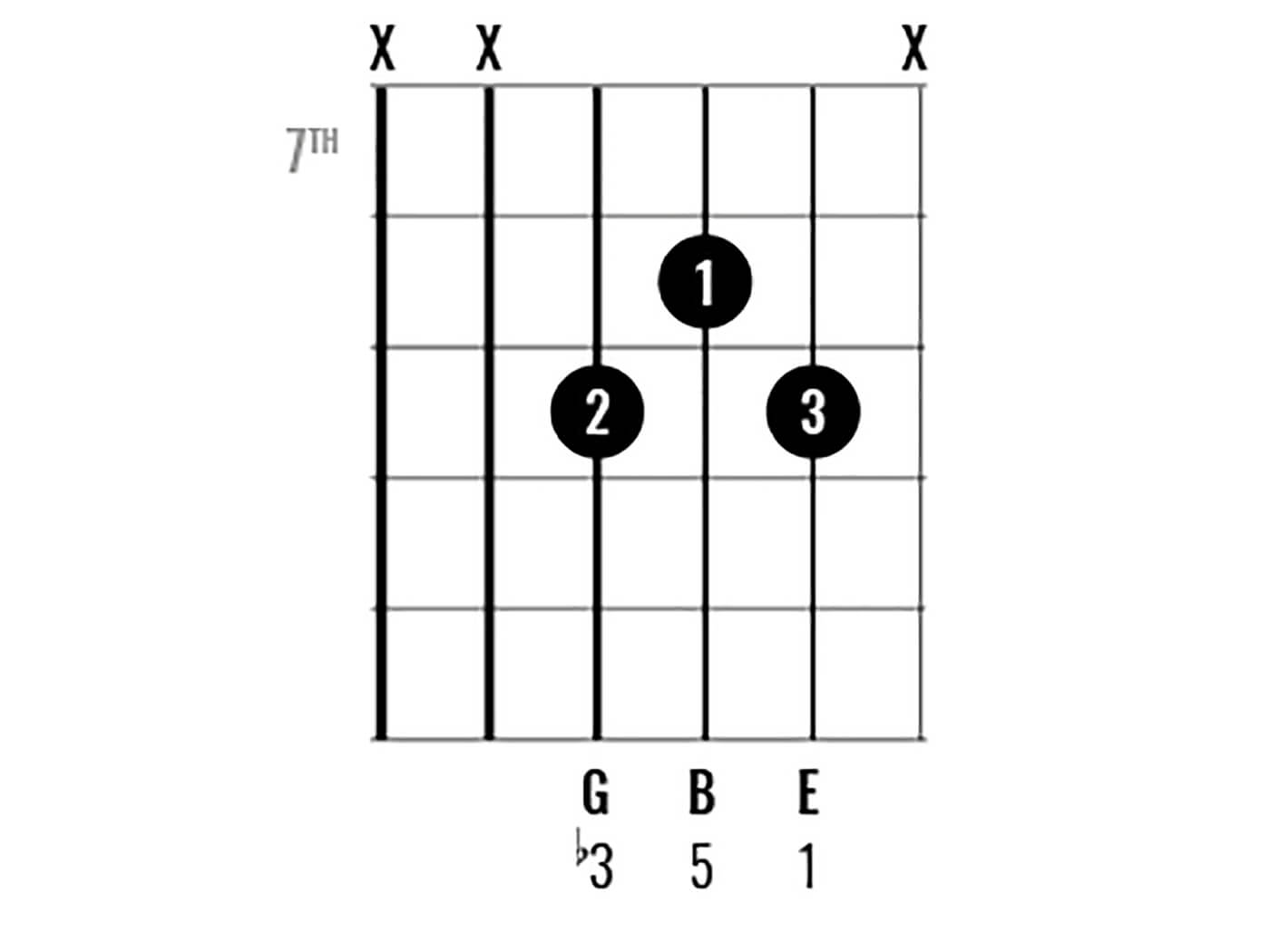 Here we have a different first inversion shape, this time on the 4th, 3rd and 2nd strings. See if you can work out root position and second inversions on the same three strings. You can also let the first string ring open against these inversions for added jangle. 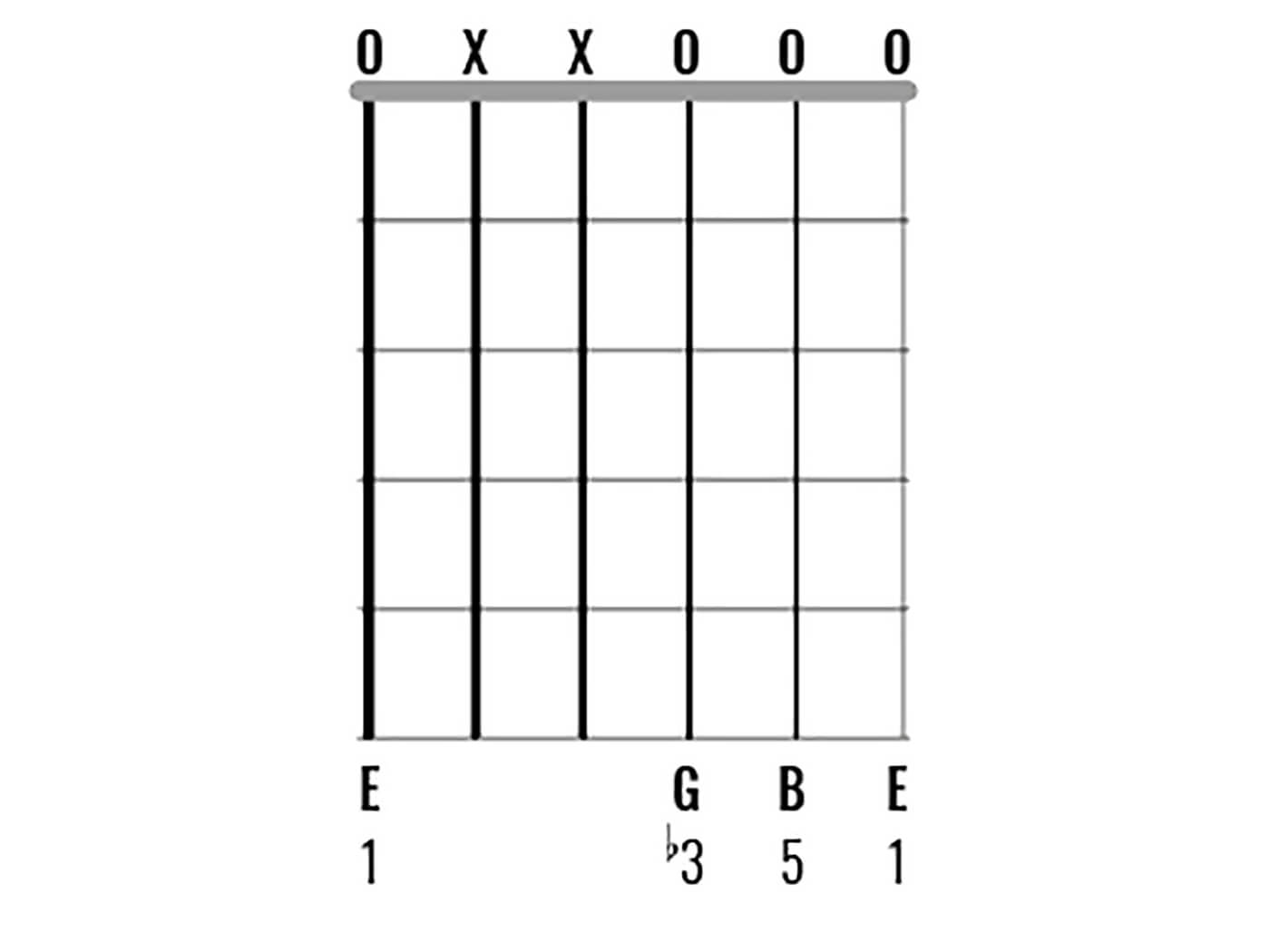 Finally – drum roll please – the easiest chord on the guitar, but for finger pickers only. The open strings make a root position E minor with no fret hand fingers needed. Your picking hand thumb plays the open E bass note and the index, middle and ring fingers take care of the top 3 strings, one finger each. Try some arpeggios and mix in some C, G and D chords, and your four-chord song is on its way.