Triads are some of the simplest chords playable on a guitar, but move them around over a pedal note and things start to get really interesting. 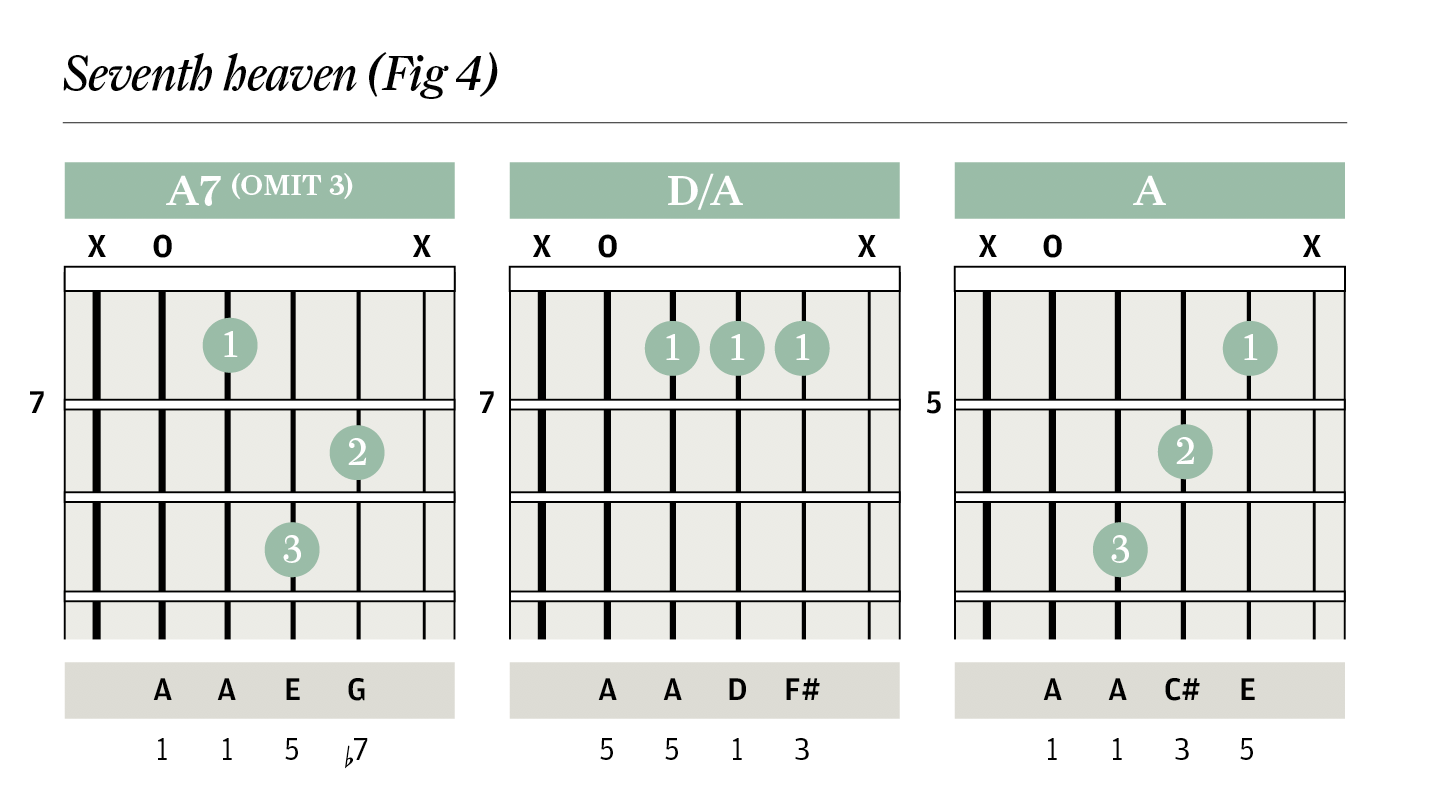 Triads, which are three-note chords consisting of a root, third and fifth, can fall under the fingers very easily on the guitar, and are great tools for creating rhythm parts. One way to make triads sound interesting is to play them over a pedal note.

We mentioned pedal notes last month – in case you didn’t catch it, the idea of a pedal note originated when organists held down a long bass note using the pedal keyboard under their feet, while allowing the harmony to change up above on the keyboard, played with the hands. In all the following examples we are going to refer to the three highest notes as the triad and the bass note as the pedal note.

The chords in figure 1, E followed by D with E bass, can be alternated back and forth within one bar of music; try picking the bass note first and then strumming the upper three notes of the triad. Incidentally, both of these triads have the fifth of the chord as their lowest note, which makes them what we call a second inversion.

Chord sequences such as these are effective because the D/E chord creates tension and the E chord provides stability or resolution. Have a listen to Martha And The Vandellas’ Dancing In The Street for inspiration, and notice how much time it is possible to spend on this kind of simple alternating chord riff.

Figure 2 takes as its starting point the kind of rhythm part that Eddie Van Halen often came up with. Play the C and D chords with downstrokes in a rhythm of your choosing, and sound the open E pedal in any gaps in the rhythm. In the next bar, switch to the A and E triads, again keeping the open E string going as much as possible. 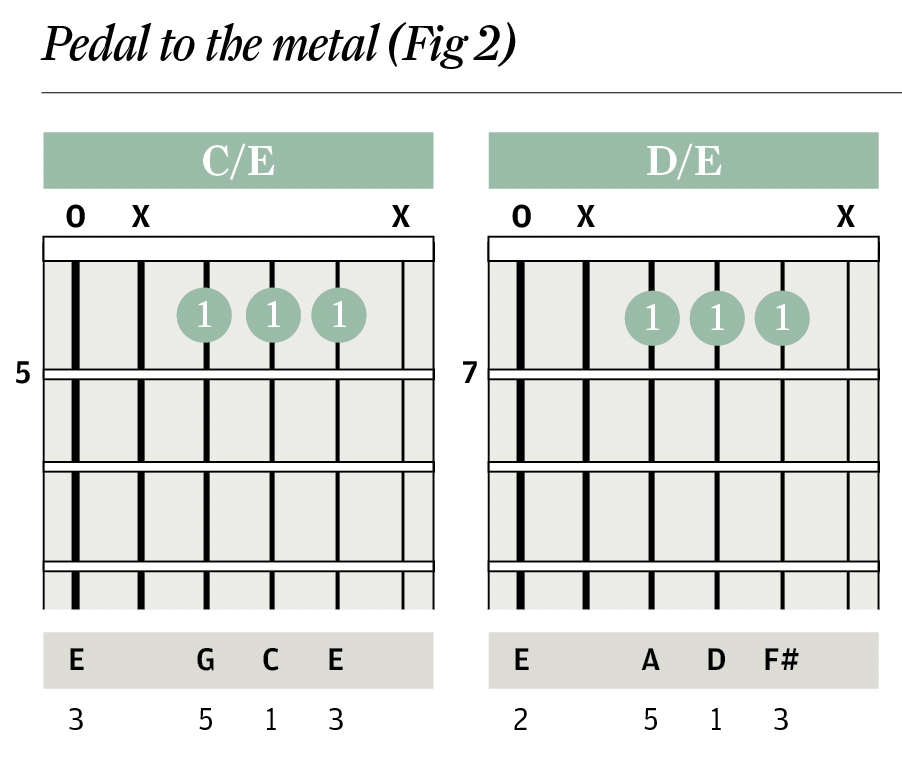 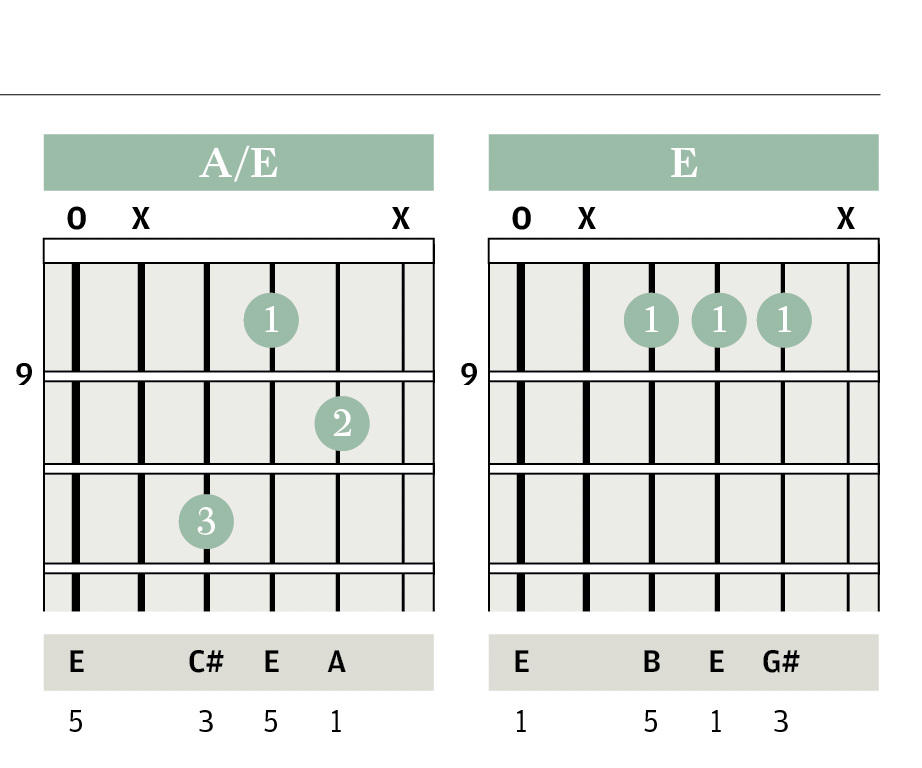 The A triad is in first inversion, as it has the third, C sharp, in the bass. We were inspired by Running With The Devil, but in that track, the bass guitar provides the pedal note – so we thought we’d see if it was possible to do something in a similar vein entirely on guitar.
A song section could mix ordinary chords in one bar with triads over pedal notes in the next. This is the approach we have taken in figure 3, where the A minor seven and A minor chords could occupy the first bar, and the second bar could consist of G/D and D. Bar three of this four-bar sequence would be the A minor chords again, and in bar four we can add in the C/D chord as well. Notice that the G chord is in second inversion, but the C and D triads are both in root position.

Check out the “and it makes me wonder” section of Led Zeppelin’s Stairway To Heaven for an example of a song using this approach. Notice that, unlike the previous examples, this one has two tonal centres that switch between A and D. 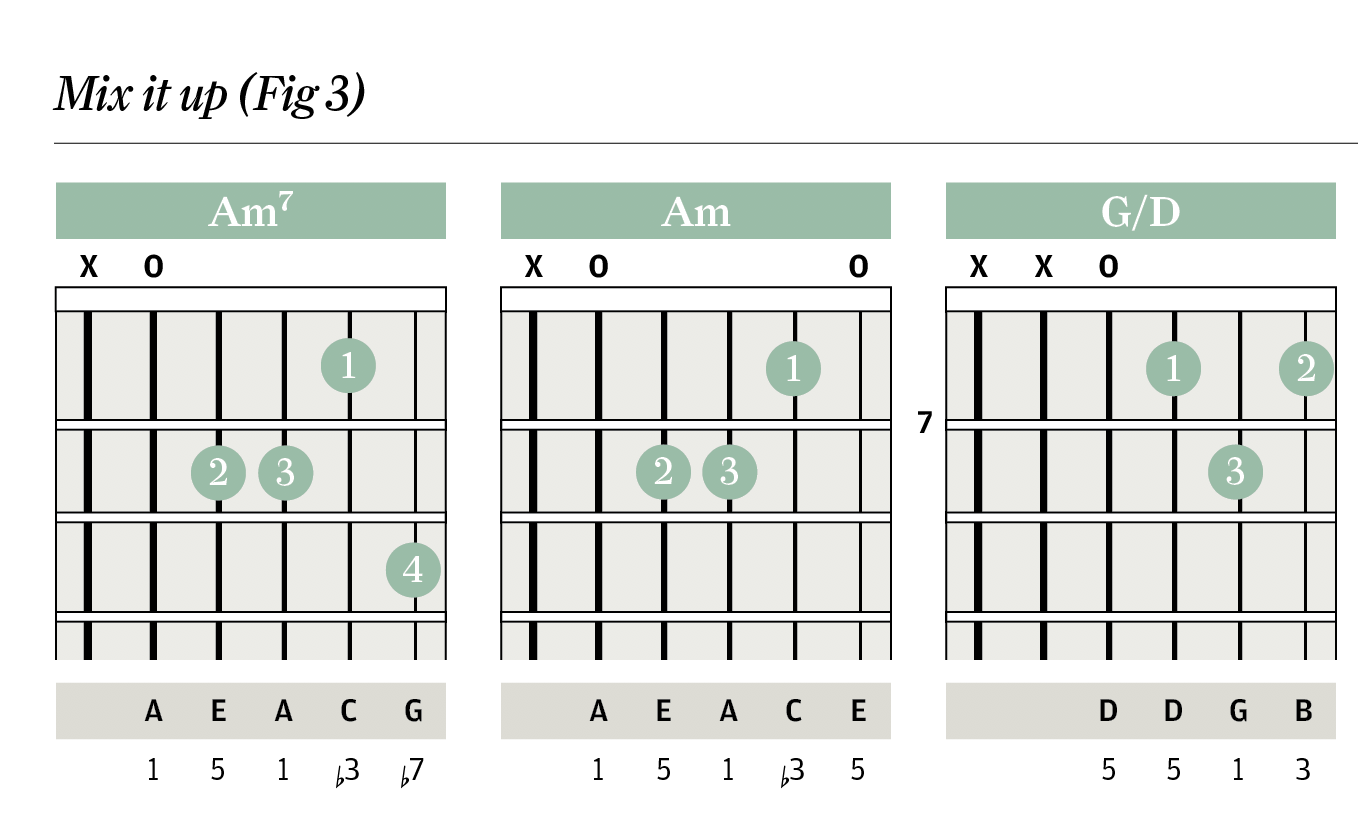 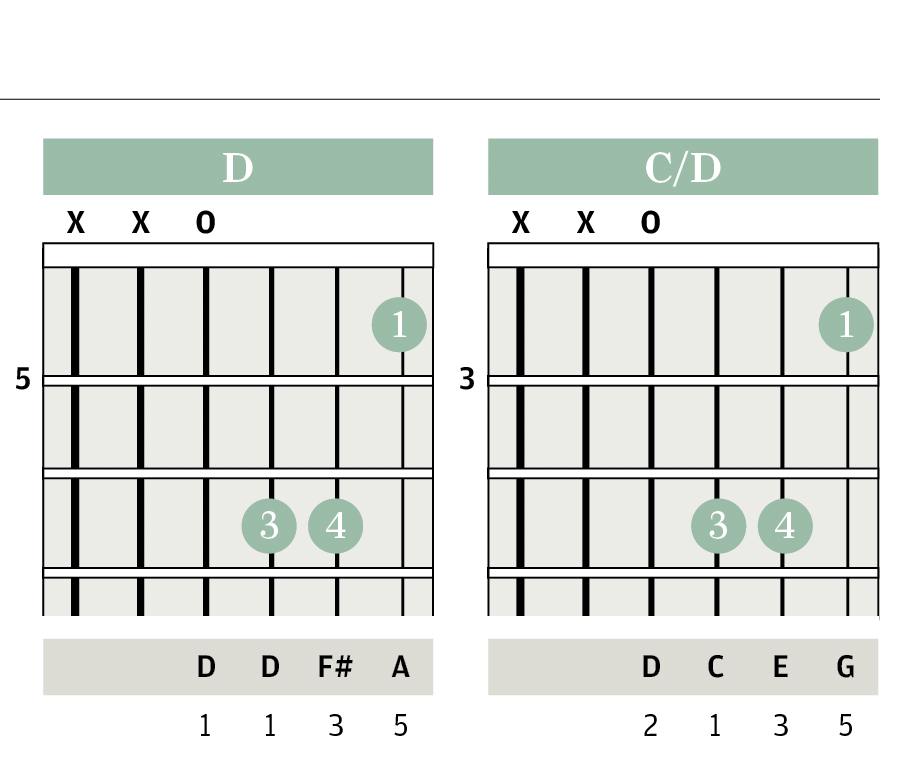 There’s no reason why you can’t extend a triad to include the seventh and still use pedal notes. In figure 4, the first chord hints at A7, but keeps to three notes by cunningly leaving out the third of the chord, C sharp.

We put this riff in the key of A so that we could use the open A string as a pedal over which the three-note chords can move. For inspiration, have a listen to the Spencer Davis Group’s Gimme Some Lovin’ at the point where the organ comes in during the intro. That song is in the key of G, so it is not going to sound the same, but it will give you an idea of how this kind of approach can work.

So far, we’ve used only major triads. Figure 5 changes that by starting off with a minor chord and doesn’t stop there, going on to include an add11, a 7sus4 and a seventh. If you have a pedal note that sounds throughout a chord sequence it can be very effective if you abandon the pedal note for a brief moment – that’s what is happening when the second-to-last chord, G6, appears.

It creates surprise and tension, followed by satisfaction when the pedal note reappears in the last bar. You could try playing this chord sequence as a series of rising arpeggios, which makes it sound as though it may have been written 300 years ago by JS Bach.
Our inspiration for this chord sequence was the intro to The Who’s Pinball Wizard, in which the F sharp on the fourth fret of the D string is played as a persistent pedal note in virtually every bar. Our sequence is different and has been turned into an eight-bar sequence, which can be looped round and round.

Your mission, should you choose to accept it: experiment with triads in different inversions over pedal notes and come up with some riffs of your own. See you next time!