An introduction to intervals, major and minor scales, and box shapes. 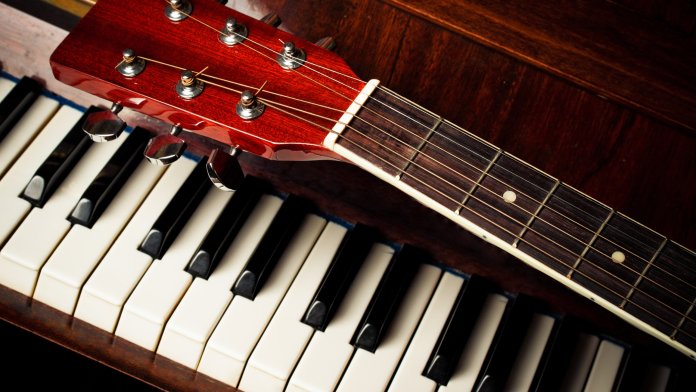 We all love guitar solos, but not everyone enjoys spending time figuring out the notes that make them up. Fortunately, there’s a pattern to most of them. Solos are built upon scales that help us break down even the most complicated riffs into simpler components. And that’s what this lesson is about.

After reading this article you’ll be able to:

An interval is the distance between two notes. There are two types of intervals: whole steps (also called a “tone”), and half steps (or a “semitone”). To put it in guitar terms, a half step is equivalent to a one-fret movement. A whole step, on the other hand, is akin to moving up (or down) the fretboard by two frets. And when you play a string of notes in certain intervals, you get a scale. Like this one:

Intervals on the fretboard

Here’s how that diagram of intervals looks on the E string of the fretboard.

In this diagram, the notes E, F, G, A, B and C have been highlighted. Since the F is a half step up from the E, the two notes are one fret apart—in this case the open E string and the first fret. And since the G is a whole step up from the F, they’re two frets apart, with the G on the third fret.

What about the A, B and C? As the A note falls on the fifth fret of the E string, the B has to be one step (or two frets) up, hence the seventh fret. The C, on the other hand, is only a half step (or one fret) from the B: the eighth fret.

So where would you find the D note? Knowing that the interval between a C and D is one step, you’ll need to move up two frets from the C to arrive at the D, on the tenth fret.

What happens if you play all seven notes of the first diagram in that exact sequence? You’d end up with the C major scale. That’s a seven-note scale comprising only natural notes, meaning no sharps and flats.

The C major scale is highly memorable, and can be hummed even by the terminally tone-deaf. And there’s a good reason for this: It boasts a distinctively ‘happy’ vibe that sets it apart from other scales. Go ahead and whistle the melody to “Do-Re-Mi”—that’s the C major scale.

The diagram below depicts one of the many ways the scale is arranged on the fretboard.

This particular C major scale shape can be broken down into two equal parts: Both quartets of notes, on the A and D strings, are spaced out according to a “whole-whole-half step” pattern.

This means that you start with the C, then go up a whole step to the D, then another whole step to the E, before finishing with a half step to the F. Broken down, you’d have gone five frets up the board. And this “whole-whole-half step” pattern repeats itself from the G note on the next, thinner string.

The A minor scale

Minor scales are more melancholic, yet they share a few characteristics with their upbeat major cousins. For example, both scales comprise seven notes. And if you look at their intervals, you’ll find five whole steps and two half steps, just like in a major scale. What differs, however, is the sequence of the whole and half steps.

For example, here’s an A minor scale and the intervals between the notes.

Yes, you’ll notice that the notes are exactly the same as those in the C major scale.  But the A minor is considered a different scale because its sequence of intervals doesn’t tally with that of the C major.

And here’s one way the A minor scale can be arranged on the fretboard.

But there’s an easier way to play those major and minor scales, and they’re called “box shapes.” With these, you won’t have to move your entire hand up and down the fretboard when you’re running scales. Here’s the box shape for the C major.

Compared to the earlier diagram, this shape is spread across three strings. Which means you only need to move your fingers—and not your entire arm—to play it.

And here’s the box shape for the A minor:

Now that the pattern begins on a G, you’ll get a G major scale. Notice that although the pattern remains the same, the notes have changed. And there’s a new type of note in the F sharp, or F#.

Sharps? We’ll leave that tale for next time.