First he came for synths, now he’s coming for instrument cases. What would happen if guitars were next on the list? 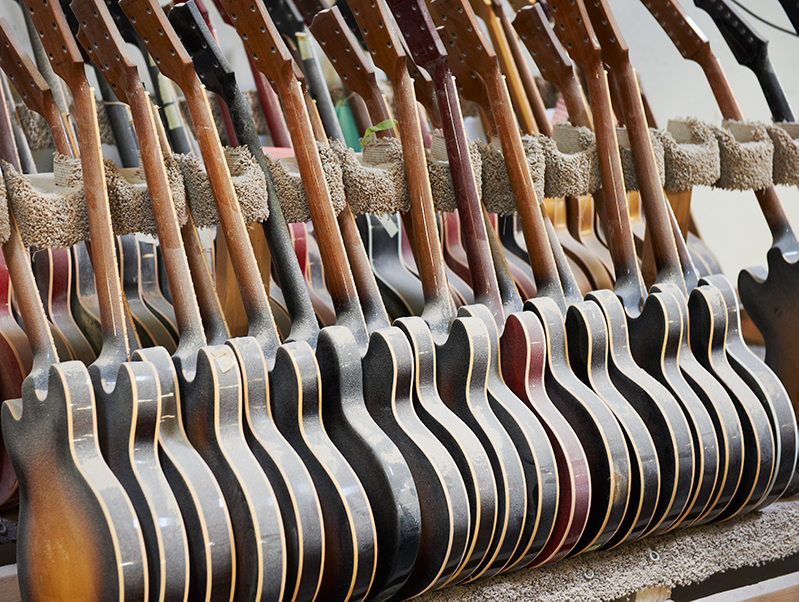 Earlier this month, Moog Synthesizers responded to the Trump administration’s tariffs on China imports with a strongly worded open letter. The company claimed the tariffs would “drastically increase” its costs, pressure it to lay off employees, and potentially force it to move some manufacturing overseas. Put plainly, Moog believes the China tariffs would hinder rather than help American businesses.

Guitar manufacturers like Fender and Gibson, however, may not agree with Moog. On the contrary, if the tariffs expand to include China-made guitars and basses, these big brands may welcome the news. The tariffs will potentially spur a seismic shift in the way musical instrument companies—in particular Gibson, due to its ownership of Epiphone—market and price their products. And they could very well make the US-made guitar great again.

Moog was referring to the 25% tariff on $34 billion worth of imported China goods, which includes the components the company needs to build its synths. Pedal companies are similarly affected by the price hike. But this batch of tariffs turned out to be the first part of an ongoing saga.

Last week, the US fired another salvo: It is considering implementing by August 30 a new round of tariffs, this time of 10% on $200 billion worth of China-made goods. And for the first time, “musical instruments” is directly mentioned in the list of tariffed products. That said, there’s no need to run out to the store and snap up all the made-in-China guitars you can find, hoping to sell them for a profit on Reverb.com when the prices go up.

The actual product category referred to in the US Trade Representative’s list refers to musical instrument cases. Yet, as the US and China become deeper embroiled in a trade war, and with President Donald Trump threatening even more tariffs, it isn’t far-fetched to see full-fledged musical instruments make the list.

A 2018 IBISWorld report pegged musical instrument manufacturing in China as an $8 billion industry, a sizeable amount of which comes from export revenue. According to Music Trades, the US in 2016 imported $160 million worth of guitars from China, subjected to a 3.2% tariff. These guitars are mostly low-cost models, including those from Epiphone, Ibanez, Squier by Fender and Washburn.

Higher tariffs, however, do not necessarily spell doom and gloom for these brands. They may simply decide to pull out of China and move overseas manufacturing operations to Indonesia, for example. But uprooting a supply chain that has been working efficiently for many years could bear serious product and quality ramifications.

Guitars are crafted products, after all. They depend significantly on source materials and labor, even in today’s world of automated tools and CNC machines. Made-in-America guitars that use components sourced from China may have a price hike to deal with, which may result in companies passing on costs to consumers. However, there could be certain benefits to the equation.

And those advantages may be hiding in dirty laundry.

Back in January, the US implemented a 20% tariff on the first 1.2 million washing machines imported every year. Samsung and LG responded by raising prices. But Whirlpool Corporation, which for long had sought protection from the US government to curb its loss in market share, celebrated. Its stock price soared the highest it had been in nearly two years, and it added 200 jobs to its Clyde, Ohio, factory in anticipation of increased demand.

“We were pleased with the tariffs,” Paul Fiser, a Whirlpool manager in Clyde, told The Washington Post. “Some of the overseas companies were dumping product, and we can make as good as anybody, given a level play field.”

Whether a beleaguered company like Gibson will experience the Whirlpool effect is hard to tell. On one hand, more expensive Chinese guitars mean its American-made Gibson Les Pauls will become more competitively priced, leading to an increase in demand. On the other hand, it would also shrink the cost difference between a low-end Gibson and a high-end Epiphone.

For Gibson, if the drop in sales on its China-made product outweighs the increase in contribution margin from its US-made product, it could wreak havoc on its business given its ongoing restructuring process. Yet, if the balance is in favor of Gibson’s American-made product, Trump’s tariffs could be precisely what the Nashville company needs to accelerate the recovery of the beloved brand.

The typical guitarist, though, may have to bear the brunt of those tariffs. In the washing machine example, The Washington Post found that the Consumer Price Index for the household device experienced a 16% price jump from March to May.

However, guitars are a different product altogether. The manufacturing landscape outside of China for the dominant brands is more diversified, with countries like Indonesia, Vietnam, South Korea and Japan all playing a part. These tariffs could improve the accessibility of imported goods from countries other than China, even as countries like Japan and South Korea have become less competitive in recent times.

Furthermore, the need for larger brands to seek alternative production sources could create stronger local manufacturers in countries like Indonesia and Vietnam. This will only serve to intensify competition if and when the trade war subsides. Great for the consumer, not so good for the Trump administration’s original intention of improving domestic manufacturers’ business.

The bottom line is: It’s still too early to presume that these potential tariffs will cripple the industry and the modern guitarist. But with musical instrument cases already in the crosshairs, the likes of Fender and Gibson must already be strategizing their next moves. Whether the American Stratocaster or Les Paul will be as prized as ever is anyone’s guess, but we’ll be watching this story closely as it develops.