Here's some of the history of Clarence White's original 1935 Martin D-28 guitar from Forsyth's James Youngjohns. 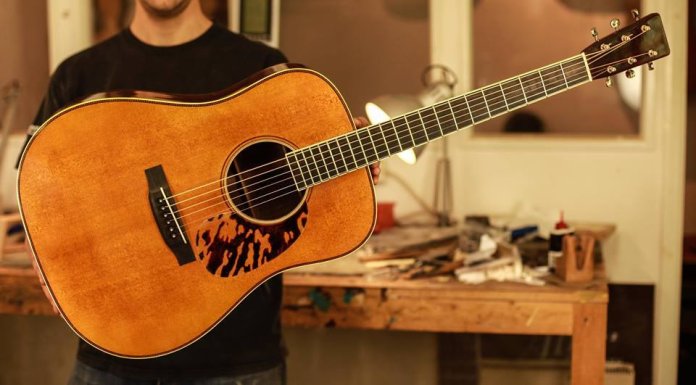 Music recently acquired a very special Alister Atkin ‘The White Rice’ dreadnought as part of a sale designed to highlight hand-made British guitars. The guitar is a very limited replica of the 1935 instrument owned and used by Clarence White and Tony Rice. It features a torrefied sitka spruce top, Indian rosewood back and sides and a special aged nitrocellulose lacquer finish. It’s sure to set pulses racing among fans of bluegrass, country and flatpicking…

Here’s some of the history of Clarence White’s original 1935 Martin D-28 guitar from Forsyth’s James Youngjohns:

“The story starts with the legendary country picker Clarence White and a very worn, battered 1935 D-28 the young White found in a music store in desperate need of attention. The guitar was in a terrible state of repair, was missing a fretboard and had undergone a series of modifications. The top had been sanded thin and the neck shaved. The owner previous to Clarence had played the guitar sufficiently hard to wear away patches of wood around the sound hole, and attempted to improve the appearance of the guitar by enlarging the sound hole so that the damaged wood was removed.

“Still, it was a D-28 at a price Clarence could afford, and he purchased the guitar and entrusted it to a repairer who fitted a Gretsch fret board and attended to various cracks. White was advised not to fit heavy gauge strings to it due to the sanded top being too thin to support them, advice that was swiftly ignored and the guitar was soon back for more repairs to the soundboard. For the early part of the 60s Clarence played the D-28, until frustrations with its declining playability led to it largely being replaced by a newer D-18. The guitar certainly continued to live a colourful life in Clarence’s hands, including getting shot with a BB gun and narrowly surviving a run-in with a truck, before eventually being used as collateral on a loan in 1965 and never reclaimed.

“Tony Rice first encountered the legend’s D-28 as a nine-year-old backstage at a Clarence White concert, where White kindly allowed the child a chance to play his old guitar. As Rice began to build a reputation of his own, he began to take an interest in acquiring the instrument and in 1975 tracked down its current owner, who was happy for Rice to purchase it. Once again, the guitar required considerable work to make it playable, with several cracks to repair, a very worn bridge plate and a much needed neck reset, but the resultant guitar has remained Rice’s number one to the present day.”