The new range is designed and built from the brace up.

To celebrate Taylor’s new patented V-class bracing system, the brand’s chief luthier Andy Powers has launched the Builder’s Edition—think of it as his ‘Director’s Cut.’ And the first model out of the starting blocks is the K14ce, which has all the hallmarks of a Taylor in terms of comfort and sheer good looks. 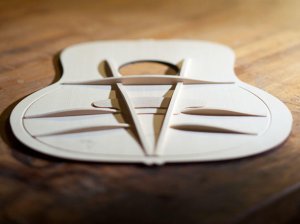 Taylor claims its V-class system, when compared to more typical X-braced guitars, improves an acoustic’s volume, sustain and intonation while increasing its projection. But while the K14ce—it’s sized according to Taylor’s Grand Auditorium specifications—is ultimately a product of the V-class, there’s much more to the guitar than that.

The premium model pairs a torrefied Sitka spruce top with Hawaiian koa back and sides. Together with beveled armrests and body edges, a reshaped cutaway improves playability and ergonomics, while ebony bindings and a ‘Spring Vine’ fretboard inlay make the guitar a sight to behold. Even the back of the instrument has been labored over. It bears Taylor’s new silent satin finish, which reduces the amount of incidental noise made from the guitar brushing against the player.

Besides the K14ce, Taylor has also launched three other Grand Auditorium models—they aren’t in the Builder’s Edition line-up, though—that star the V-class system: the PS14ce, K24ce and 914ce.

The K14ce lists for $4,999. For more information, check out taylorguitars.com.