The Les Paul officially became the SG in 1963, but guitars were still leaving Kalamazoo with the man’s name on their truss rod covers until the tail end of the year. Huw Price gets to grips with one of the last examples, along with that sideways Vibrola… 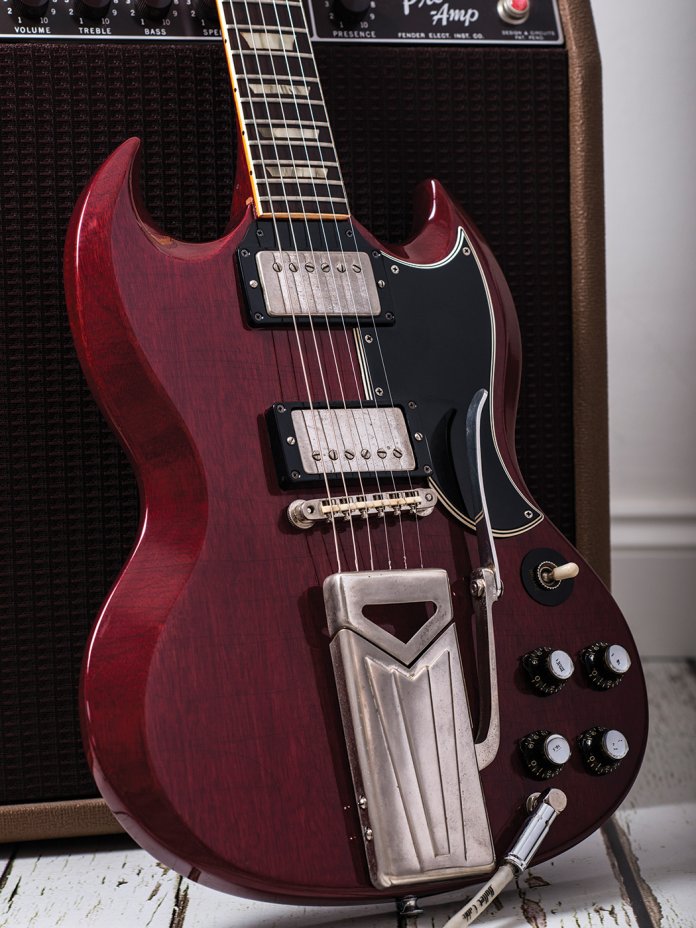 You never really know what you’re going to get with vintage Gibsons. The hollowbodies and semis are frequently pristine, possibly because the players that owned them were often jazzers who tend to be quite careful with their gear and more restrained in performance. In contrast, Juniors and Specials are rock ’n’ roll workhorses and so often the survivors bear the scars to prove it.

Old SGs can be much the same, but even those that have been cherished have often fallen foul of the design’s structural weak spots. We can only wonder where this guitar has spent the last 55 years, but if pushed, we’d suggest that much of the time, it was inside its original case. 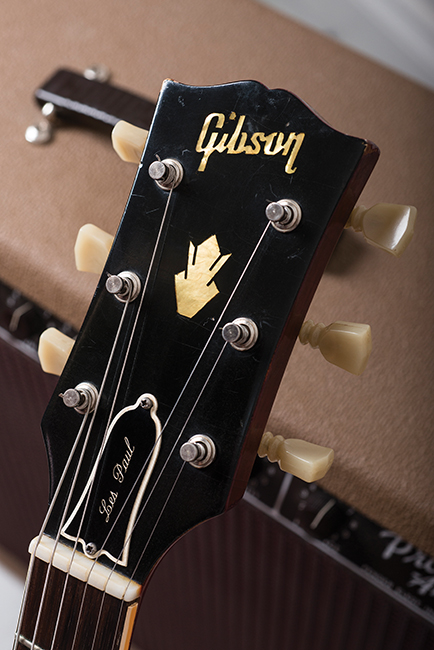 The colour is a vibrant dark cherry and although there is all-over lacquer checking, there are only three areas where the finish shows any sign of wear. There’s a sizeable dent/chip on the back near the control cavity, some chipping and flaking around the neck join and a bit of rash on the back of the neck where the finish has reacted to the fabric inside the case.

One thing the chips reveal is that Gibson was spraying its finishes quite thick during this era. Happily, there is no neck wear or buckle rash and the headstock has never even been damaged, let alone repaired.

The logo and crown inlays have a golden glow under yellowed lacquer on the wide headstock, but the rosewood fingerboard appears virtually unworn and there’s ample life left in the factory fitted low-profile jumbo frets. Even the fret nibs survive largely intact. 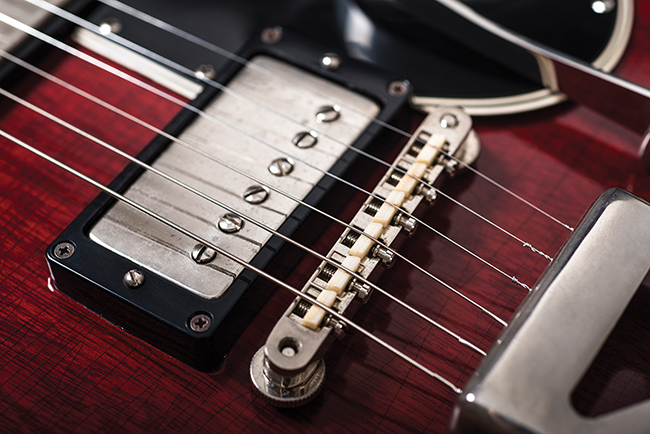 It’s interesting to note how aggressively Gibson bevelled the ’board edges, and it appears to have been done post-spraying. It introduces a comfortable roll over and would have been invisible when new, but as the clear lacquer has yellowed, the bevel shows up as a sharp line.

Also curious is the way the binding is proud of the neck in some areas on the treble side. It’s perfect on the bass side, but on the other it’s almost as if they forgot to scrape the binding flush at the factory. There is also evidence of shrinkage, with a sizeable gap at the nut and fret nibs that no longer line up with the frets. But hey, if this sort of thing bothers you, then perhaps a reissue would be more a more suitable option. 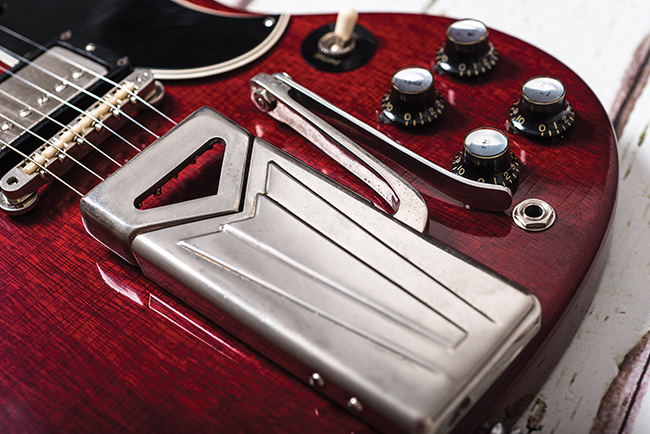 There are no concerns in the control cavity because everything appears just as it did when it left the factory. This guitar predates brass cavity linings and if you look closely you can see that a shaving was chiselled out to get the pickup switch to fit. Both tone capacitors are ceramic types and they’re wired to the inputs rather than the outputs of the volume pots. Both pickups are the original Patent Number humbuckers.

Unusually for a 1963 model, this example is equipped with Gibson’s notorious sideways vibrato. Most 1963 SGs that sport factory-fitted vibratos have the Maestro unit with the Lyre faceplate. The unit here is a sizeable piece of hardware to fix onto a guitar, but it possibly helps to balance it out because there’s no tendency to nose dive and the guitar still feels light. 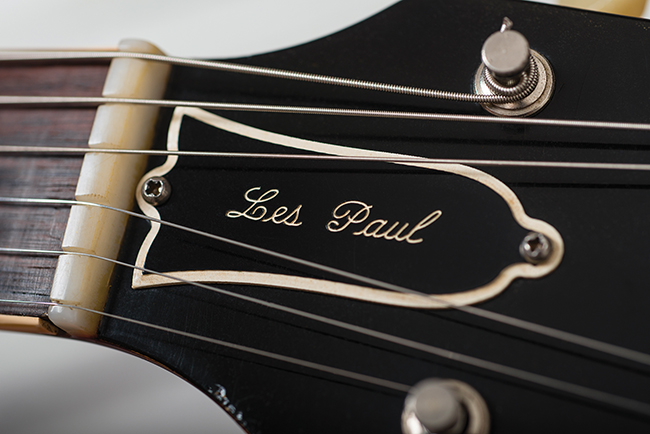 There are few things we love more than a 1950s Gibson neck, and had Gibson necks not gone super skinny in ’61, it’s possible that there would be even more enthusiasm for first and second year SGs. Fortunately Gibson was rediscovering its spokeshave mojo by 1963, and although this example feels different to a 1950s neck, it has good depth and it’s extremely comfortable.

With a squarer-sided C profile, it actually feels more hand filling than some of Gibson’s older and deeper necks. The depth is also more consistent from headstock to heel, which makes sense with a 22nd fret body join. 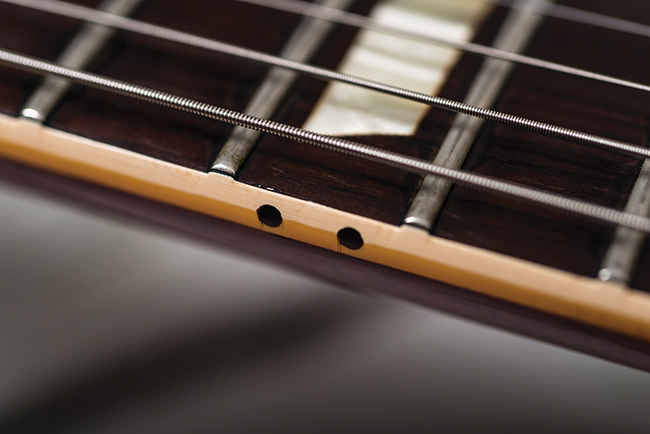 Despite its less than rosy reputation, the sideways vibrato turns out to be a perfectly usable device – once you get used to the way it works and understand its limitations. Rather than press down or pull up on the arm, as you would a Bigsby or a Strat trem, the Gibson arm moves laterally across the front of the body. It makes sense because as you’re playing you can curl your fingers under the arm and squeeze upwards to drop the pitch or push it away to raise it. Alternatively, just waggle the thing for a gentle pitch wobble. 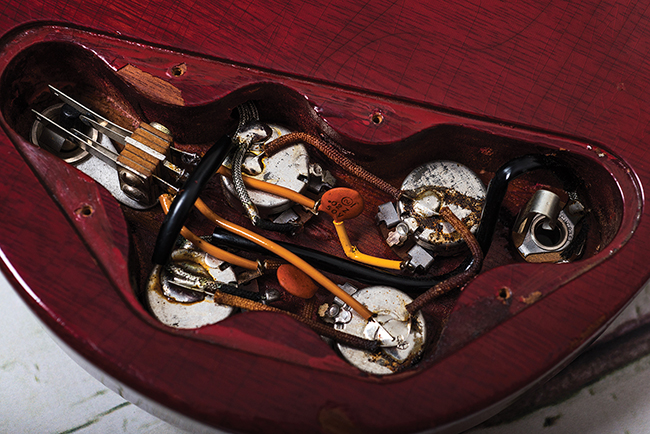 The arm is also hinged, so you can set it almost flat to the pickguard, where it’s quite unobtrusive, angle it slightly upwards for easier access or fold it back completely and forget it’s even there. The controls are also a lot easier to access than they are when a Bigsby is fitted to an SG. However, while it’s perfectly suitable for gentle vibrato, it has nothing like the range of a Strat trem or even a Bigsby and tuning chaos ensues if you become over enthused.

The acoustic tone is everything we’d expect from a mahogany Gibson of this era with a Tune-o-matic bridge. There’s ample sustain, a smooth and harmonically rich fatness and a treble response that falls a little short of Juniors and so forth with aluminium wrapover tailpieces.

Although the Patent Number humbuckers aren’t PAFs, they aren’t far off and they deliver everything we might expect from their 1950s predecessors. Maybe they’re just a little darker sounding, and the bridge in particular has a touch more nasal snarl, but these units are super clear, very articulate and dynamic, and they interact with the controls to deliver a wide range of classic tones. 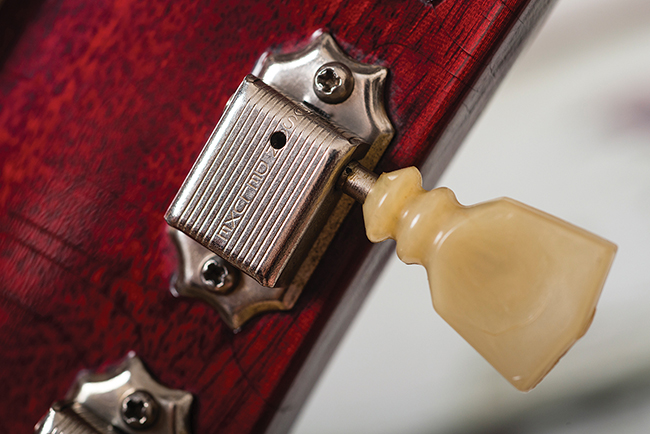 Given that our experiences with PAFs have been mostly confined to Les Pauls, added to the fact that the differences we are hearing are so minimal, it’s entirely possible that they could be attributed to the guitar’s nylon saddles and lightweight all-mahogany construction.
Despite making some minor adjustments, we find the neck pickup slightly overshadows the bridge in output and tone. The bridge has a fantastic and unmistakeable vintage Gibson sound, producing a jangly bite when clean and an aggressive bark with overdrive.

The neck unit is simply outstanding. It possesses a smooth woodiness, superb dynamic response and a precise attack that never becomes edgy. From a tonal and playing perspective this is a no-issues vintage SG. The few minor blemishes that it does have are entirely cosmetic and whether you prioritise playability or collectability, this guitar ticks both boxes, enthusiastically.