This classic rock ’n’ roller beloved of AC/DC’s Malcolm Young has a few issues but, as we discover, it’s a super-cool vintage model. 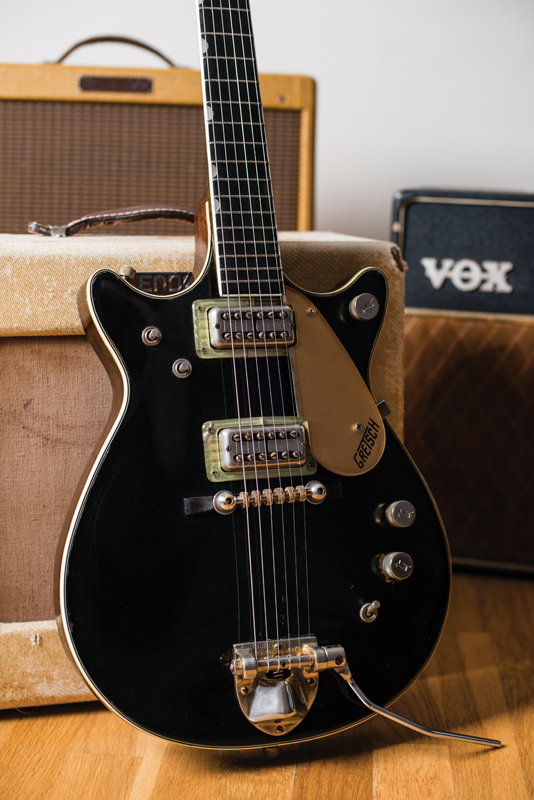 Although Roundups, Jet Firebirds and Duo Jets are sometimes referred to as ‘solidbody’ guitars, they’re actually semi-solid designs. This double-cutaway Duo Jet dates from 1963 and is far from mint; in addition to a small area of missing neck binding near the headstock and snapped pickup rings, it has recently undergone a headstock repair. Happily, the luthier did a decent job and the lacquer touch-up matches quite well.

The factory label is glued to the back of the switch cavity cover and the serial number corresponds to 1963, but the model number has been changed from 6129 to 6128. A pen was used to write an 8 over the 9, and although 6128 is correct for a Duo Jet, 6129 was the model number Gretsch used for the Sparkle Jet. 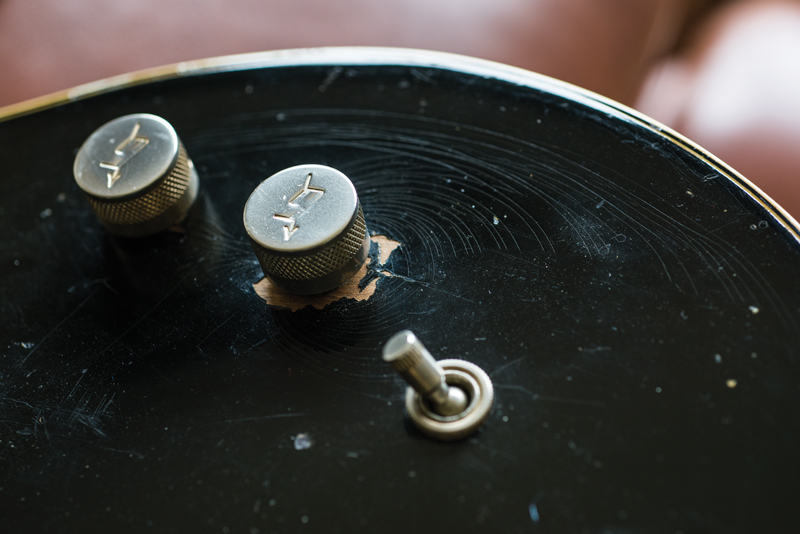 The factory had probably run out of 6128 labels. Duo Jets of this era had black lacquer-finished tops and this one shows extensive crazing. The all-important neck angle is good and there’s plenty of downward adjustment potential if needed, but the break angle over the pinned bridge is a bit marginal.

The neck feels narrow across the fingerboard and tapers from slim-ish at the nut end to fairly clubby at the body joint. The narrowness and full round curve create a slightly bulbous feel and it’s not the sort of profile you’d find on a modern guitar.

Although it doesn’t have the original case, all the original parts are in situ, including the gold-plated Filter’Tron pickups and open gear Grover tuners.

Let’s get the worst bit out of the way. If you think the tuning stability of Bigsbys can be wayward, the Burns vibrato on this Duo Jet makes a Bigsby feel as slick as a Floyd Rose. Then again, the plethora of pings emanating from the headstock area  suggests that he vibrato unit may not be entirely to blame.

I compared the 60s Filter’Trons to some TV Jones Classics and the experience was not unlike pitting original Gibson PAFs against most modern boutique wannabes. The TV Jones units are very close to the Filter’Trons and sound wonderful in their own right, but the originals are clearer, woodier and more harmonically complex. It’s well known that original Filter’Trons weren’t wax potted, but TV Jones wax pots his – unless you request otherwise when ordering. 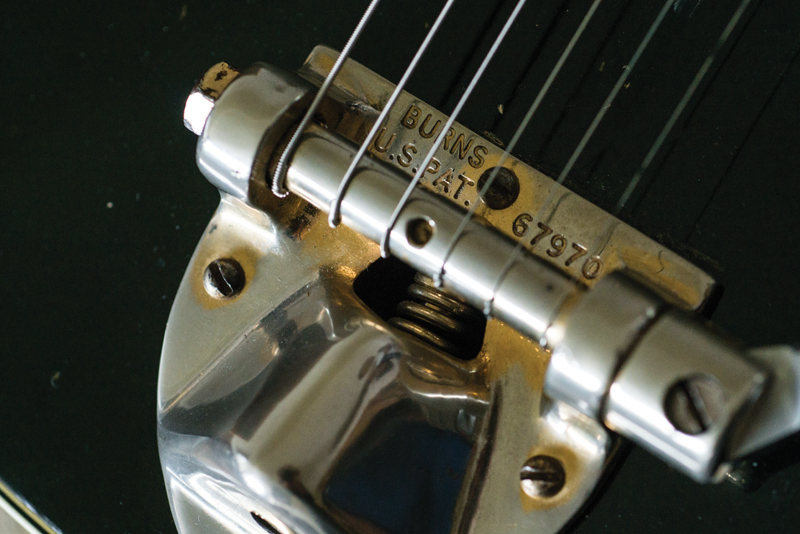 From the front, this looks like a compact and conventional instrument, but holding it creates a different impression. It feels more like a jazz guitar because the body is quite deep and the neck joint is an archtop-type arrangement with a fingerboard extension that floats above the body.

Consequently, the bridge sits high, and don’t be deceived into thinking that twin cutaways facilitate SG-style access to the upper frets. The heel curve actually starts at the 13th fret.

At first, the Duo Jet may feel ungainly, but getting used to it takes no time at all. Even unplugged, it’s a blast to play because the hollow body and general construction style make it sound and feel like a compact archtop acoustic. Perhaps Malcolm Young opted to leave the neck pickup out of his Duo Jet because the void acted as a soundhole! 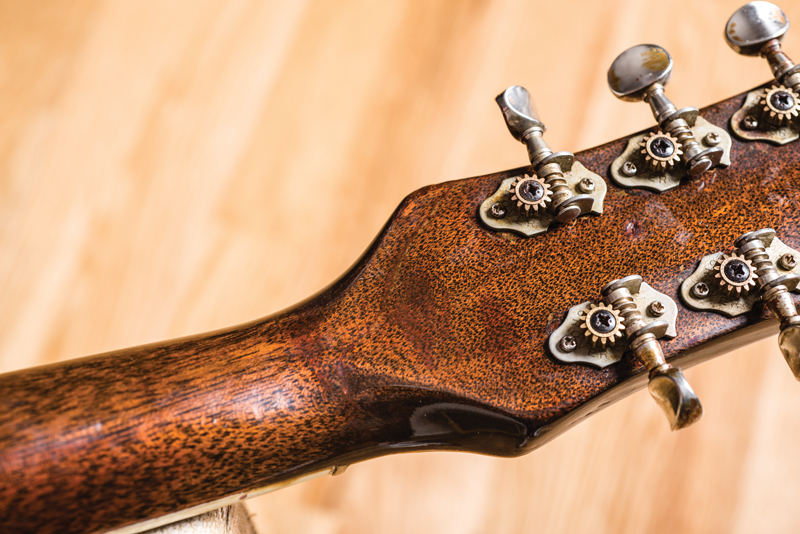 Rather than use tone controls, Gretsch opted for a tone switch with two preset levels of treble roll-off. Implemented properly, it’s a perfectly viable feature, but arguably Gretsch got it wrong from the get-go then ran with it for years.

Essentially, the capacitor values are unsuitable, so unless you’re in the middle bypass position the two options can be described as ‘unusable’ and ‘even worse’. Gretsch switched to more suitable values a few years ago, but this Duo Jet still has its original capacitors. Good to see but bad to use.

Vintage Filter’Tron humbuckers have relatively low output levels. The bridge and neck pickups on this Duo Jet ohm are a vintage-correct 3.85k and 4k ohms respectively, so you will need to turn up your amp a tad higher than usual.

The tone is unique: part P-90 snarl, part Tele twang and part jazzbox clarity, coupled with outstanding touch response, a hint of trebly jangle and real complexity. If you like to thumb pick, simply stick the selector in the middle position and gratification will
be instant. 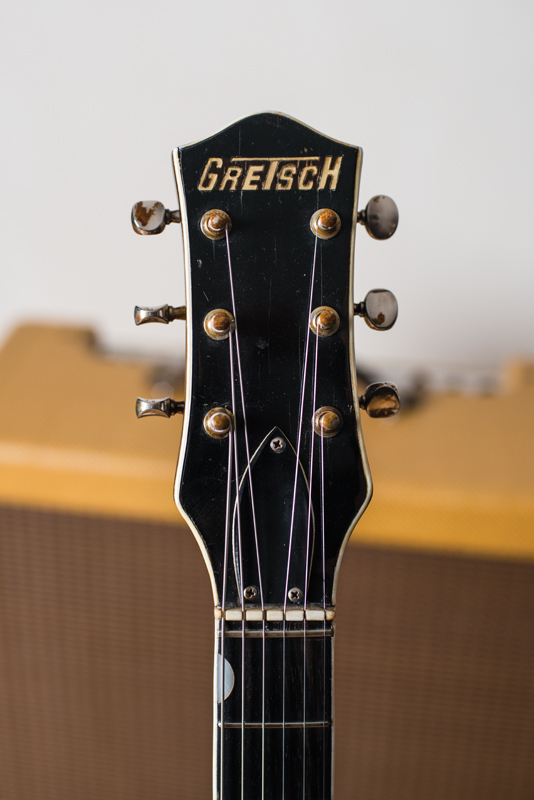 So much for clean mode; when you crank up your amp or activate an overdrive, the Duo Jet roars. You get huge-sounding powerchords and grinding riffs with a layer of chime that allows chord voicings, subtle inversions and hammer-ons to scythe straight through the dirt.

Sustain in the conventional sense doesn’t really enter into the equation, and the slightly percussive response is why the Duo Jet is such a stellar rock ’n’ roll rhythm instrument. However, it also feeds back in the sweetest and most controllable manner, so you can get sustain but you have to do some work in order to find the sweet spots.

Despite a really nice setup, with low action and unexpectedly accurate intonation, some extra work would be required to make this a stage-worthy guitar. Peering closely at the vibrato, there appears to be an adjustment screw that would allow you to lock it off.

Assuming string stretching and friction point lubrication fails, I’d be inclined to disable the Burns. The tone capacitors could be replaced and I’d maybe swap the pickups to put the hotter one at the bridge. I’d also lower the polepiece screws and shim both pickups to get them closer to the strings. There’s enough fingerboard width to use the bridge as intended and widen the string spacing, too.

At first, this Gretsch didn’t really grab me, but playing it for a while changed my mind and I really fell for it. It’s far from collector’s grade and there are issues, so to play and sound its best a few sympathetic tweaks would be in order. But overall there’s genuine potential to turn this into a gig-able vintage guitar with sonic quality and tuning stability to match its super-cool looks. 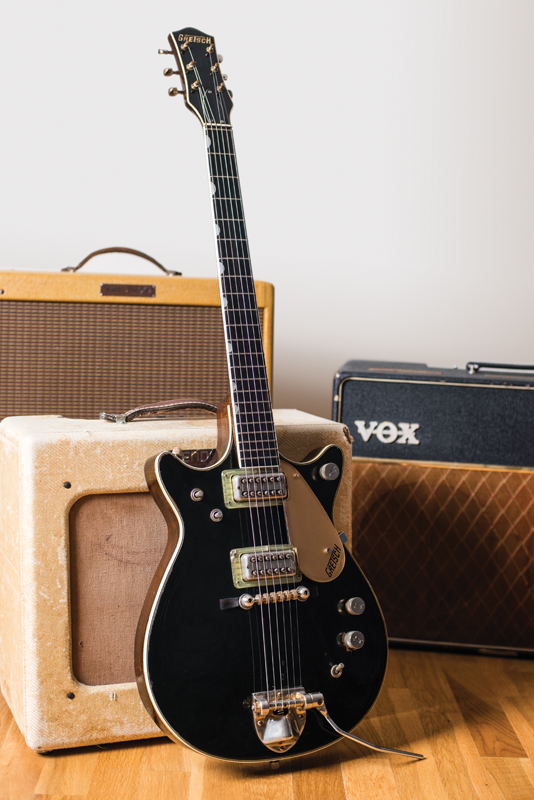